The latest limited-edition from Land Rover Classic is inspired by one of the world’s toughest off-road competitions.

Land Rover Classic are building a solid reputation – and making a very tidy profit – in the restoration of machines from the manufacturer’s past.

As previously reported by JUST 4x4s, limited editions of refurbished Series 1 Land Rovers produced by Land Rover Classic cost hundreds of thousands of dollars to buy and have sold for similar amounts at auction.

This past February, a new addition to the reproduction programme was announced in the form of the Defender Works V8 Trophy.

While the Defender Works V8 Trophy name is something of a mouthful, it has some relevance, at least the ‘Trophy’ part, as it’s taken from the Camel Trophy off-road endurance event with which Land Rover become synonymous.

The brainchild of R.J. Reynolds (the tobacco company behind the Camel cigarette brand), the Camel Trophy started in 1980 with three vehicles (Jeeps, not Land Rovers) taking on a 12-day, 1,600km navigation of Brazil’s Trans-Amazonian Highway.

The gruelling event was intended as a one-off, but the publicity it generated convinced R.J. Reynolds to sponsor it again, with Land Rover coming on board as the vehicle provider. That association continued until the event’s demise in 1998, with Range Rovers, Land Rover 90s and 110s, Defenders, Discoveries and Freelanders used in subsequent events, which were held everywhere from Mongolia to Zaire and Guyana to Papua New Guinea. The 110 and Defender would be the workhorses of the Camel Trophy, serving as both competing and support vehicles. 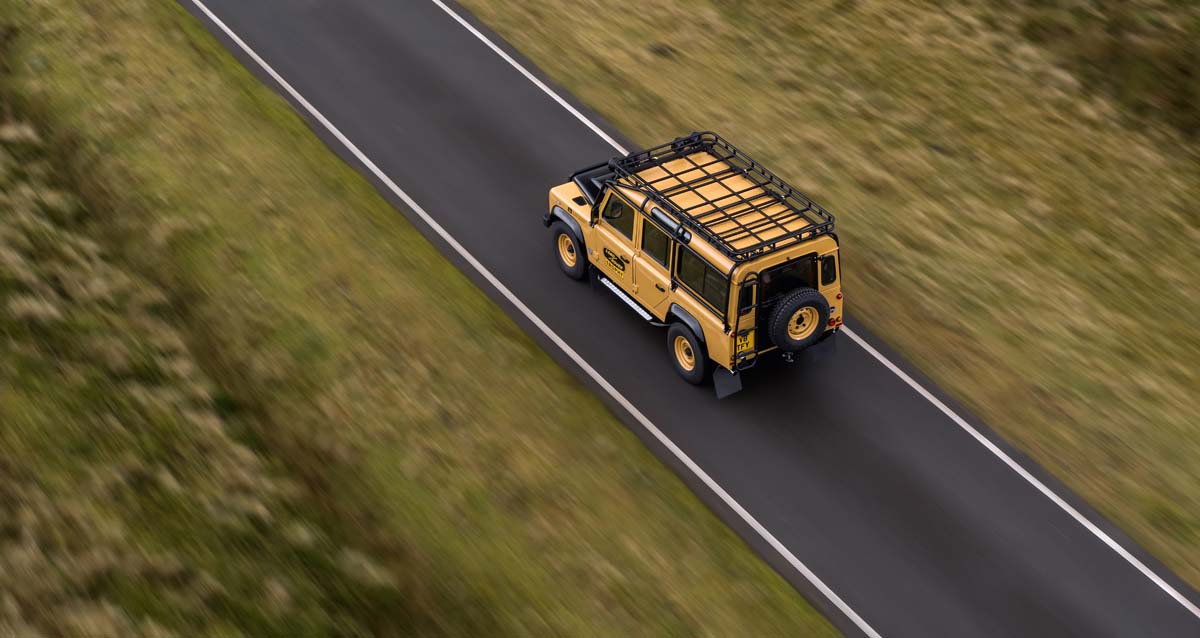 For Land Rover’s first involvement in the Camel Trophy in 1981, the Range Rovers provided were all finished in Sandglow Yellow paint, which became the signature colour for Land Rovers competing in the event thereafter.

Unlike the Dakar Rally, which is more of a race and has an established support structure, the Camel Trophy was an expedition, with participants travelling to truly remote and inhospitable areas around the globe, relying on fellow competitors and a small support team, also in Land Rovers, to complete each day's route through remote trackless regions. 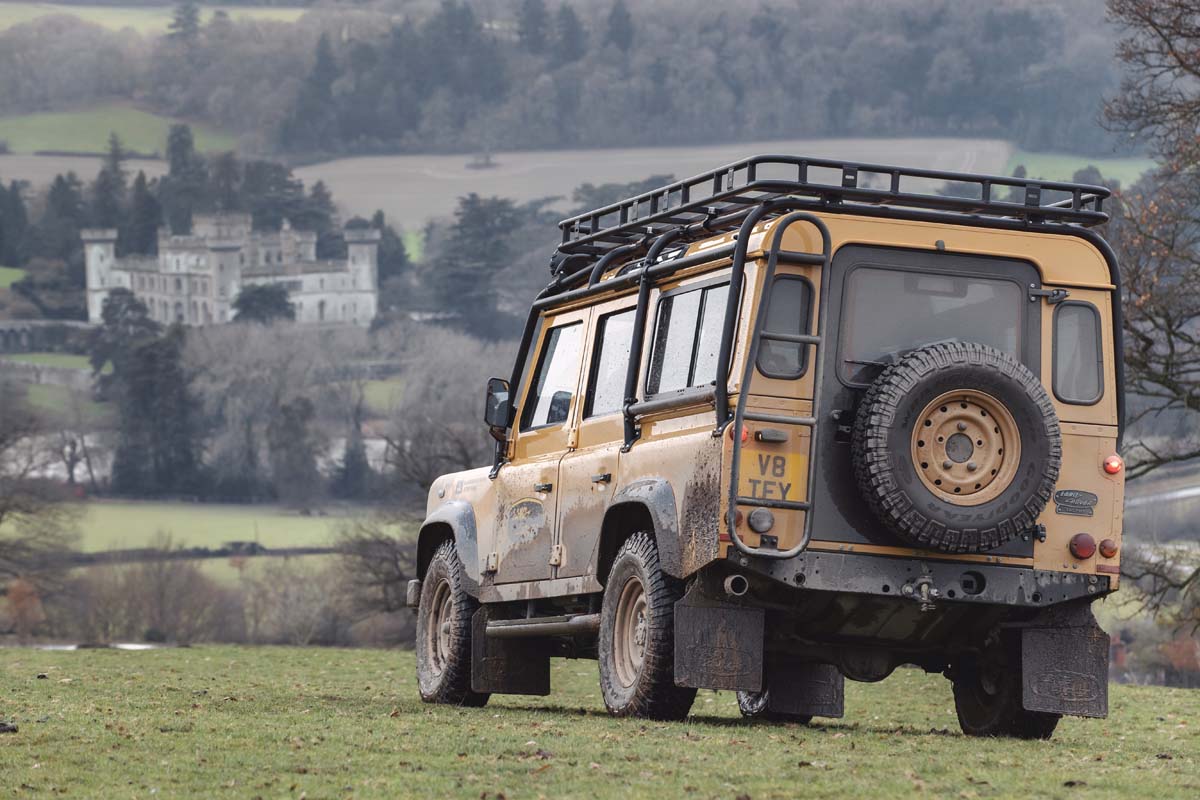 Initially, the focus was on the driving, requiring skills in fording waterways, fabricating bridges, winching and navigation. As the event evolved, humanitarian and research elements were added, like delivering medical supplies and building infrastructure in remote villages, undertaking geographical surveys and studying local flora. Later, participants would have to complete physical challenges, like kayaking and skiing. 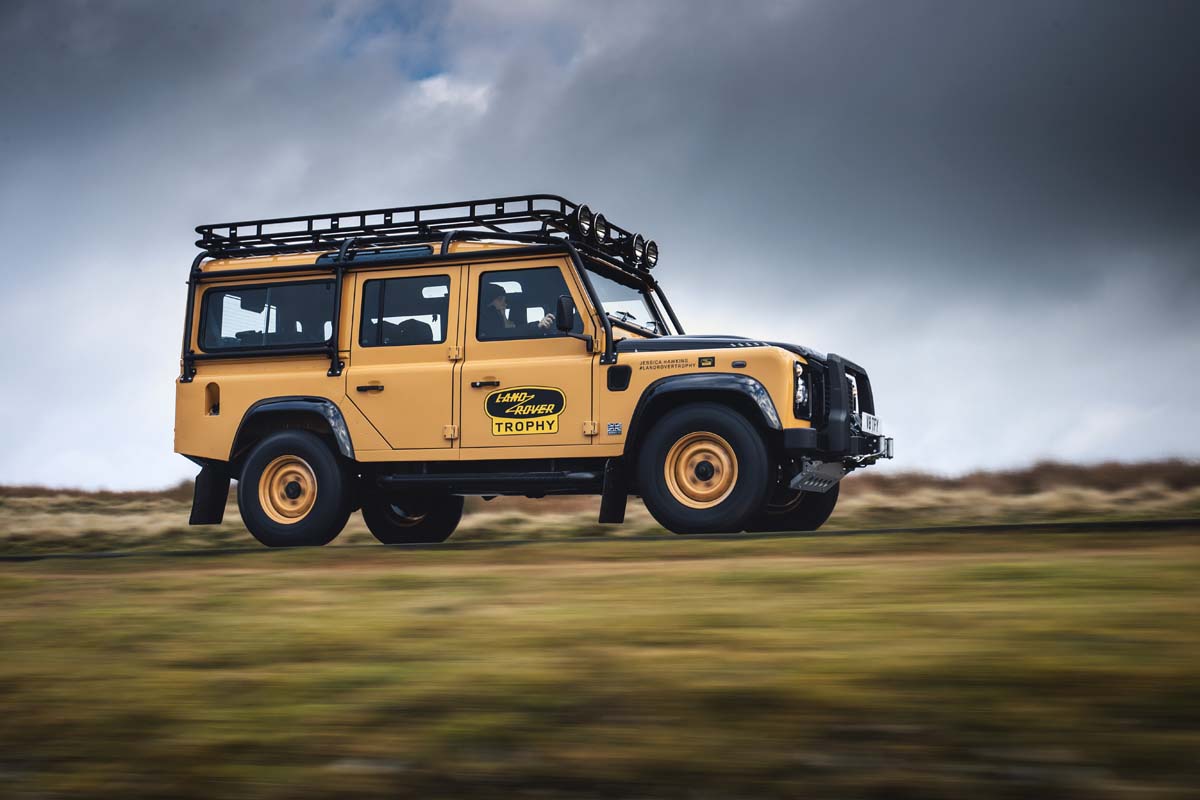 At its peak in the late 1980s, the Camel Trophy was known as the ‘4x4 Olympics’ and attracted more than a million applications for the handful of entries available, with each team of two entered under their nation. Australia hosted the Camel Trophy in 1986, with a 13-day, 3,000+km route from Cairns to Darwin.

For Land Rover, the popularity of the global event reaffirmed their off-road credentials, helping to keep sales of aging designs like the 90 and 110 chugging along.

Today, more than two decades after the last event was held, the Camel Trophy remains an icon in off-road history, so its homage in the form of the Defender Works V8 Trophy is unsurprising. But association with cigarettes has become non-PC in the same period, so there’s no use of ‘Camel’ in the new special edition and barely a mention of the Camel Trophy in Land Rover’s PR material. 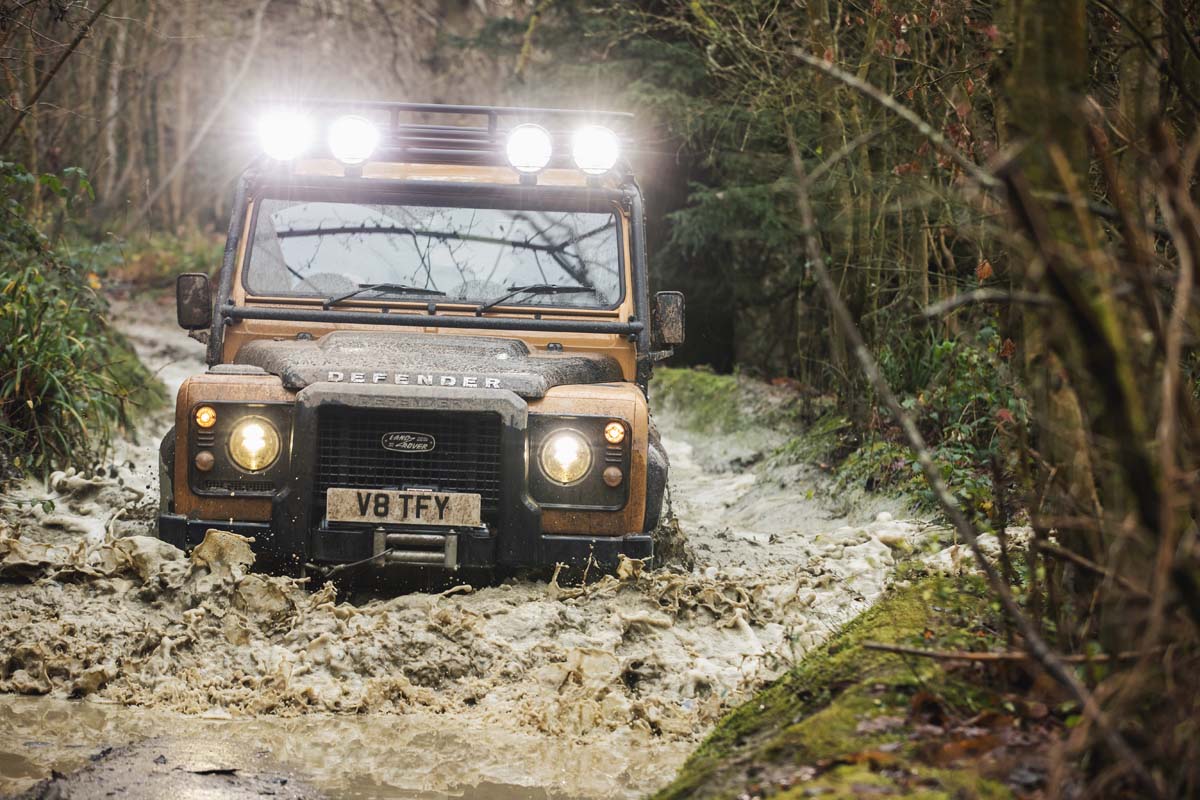 This is a Tribute

Like the Series I vehicles previously offered by Land Rover Classic, the Defender Works V8 Trophy 4x4s will be based on refurbished original Land Rover Defenders, with production limited to just 25 units.

The total will be made up of a mix of original three-door 90 and five-door 110 bodies, all based on the 2012 to 2016-era Defender Works V8 specification developed by Land Rover Classic. 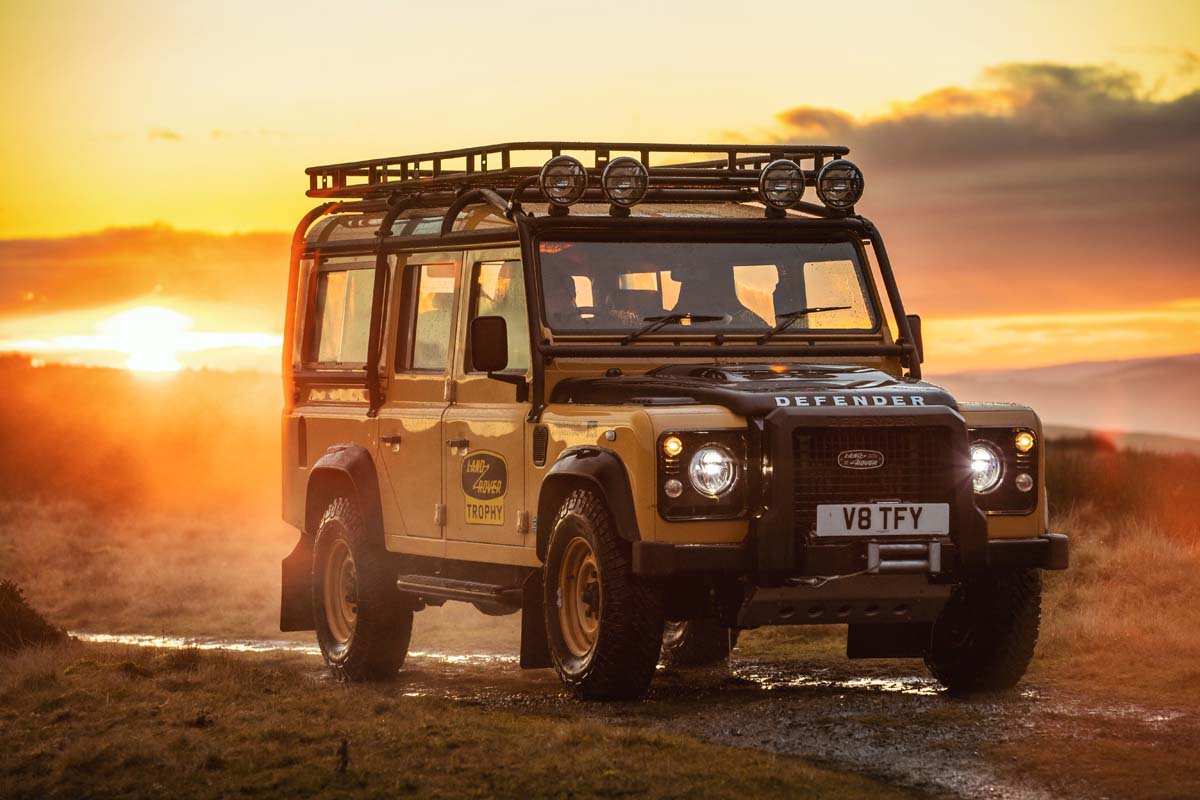 “The Land Rover Defender has always been more than just a vehicle, its engineering capability and suitability for overland expedition and all-terrain competition means it’s renowned with getting away from it all. The new Land Rover Trophy will bring this to life for a new generation of adventurer,” said Dan Pink, Director, Land Rover Classic.

Each Defender Works V8 Trophy will be finished in unique ‘Eastnor Yellow’ paint, which takes its name from Land Rover’s test facility at Eastnor Castle in the UK. The colour itself is a tribute to the Sandglow Yellow of the original Land Rover Camel Trophy vehicles, with contrasting Narvik Black on the bonnet, tailgate and wheelarch flares. 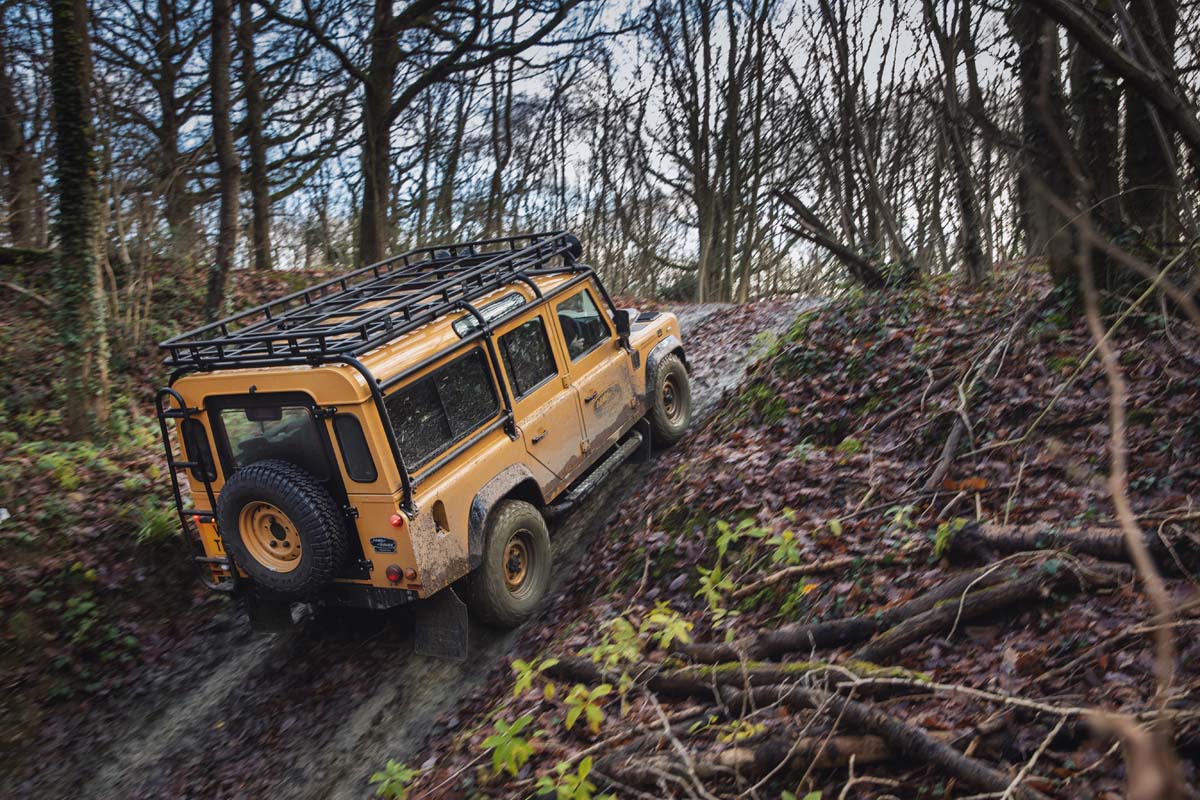 The suspension, steering and braking are all modernised and a V8 engine (see below) will be standard. Live axles feature front and rear, with coilover shocks, a Panhard rod and anti-roll bar at the front, and coilovers, A-frame with trailing links and an anti-roll bar at the rear. Brakes are servo-assisted discs - 335m front and 300mm rear - with four-piston calipers at each end.

Inside, the spec is more akin to a new Range Rover than a bare bones Land Rover 90/110, with full Windsor leather trim - from the dash to the doorcards. There’s also perforated leather on the seats and steering wheel, air conditioning and power windows as standard. Digital radio DAB+, smartphone connectivity and integral sat nav are also included, as part of the Land Rover Classic Infotainment System that combines retro looks with modern functionality.

The interior fitout is broadly similar to the Defender V8 Works limited edition from 2019, but the front seats have been upgraded to Recaro sports seats with ventilation and leather trim. These seats are unique to the Defender Works V8 Trophy, as is a bespoke dash clock by Elliot Brown with a Land Rover Trophy face.

Under the bonnet, the Trophy is virtually unchanged from the Defender Works V8, with a 5.0-litre naturally-aspirated petrol V8 producing 298kW at 6000rpm and 510Nm at 5000rpm – a lot more than what a Defender offered in the ’80s!

Matched to a ZF eight-speed automatic transmission (no manual trans is offered), this V8 delivers a 0-100km/h time of under 6 seconds and a top speed of 170km/h in the standard Works V8. The weight of the extra off-road kit in the Trophy will reduce acceleration and top speed, but overall, performance should be similar.

Don’t expect great fuel economy from this combination, though, as the Works V8 nudges 18 litres per 100km as a road-focussed vehicle. The sort of slow-speed mud plugging the Defender Works V8 Trophy is designed for would see even worse numbers. 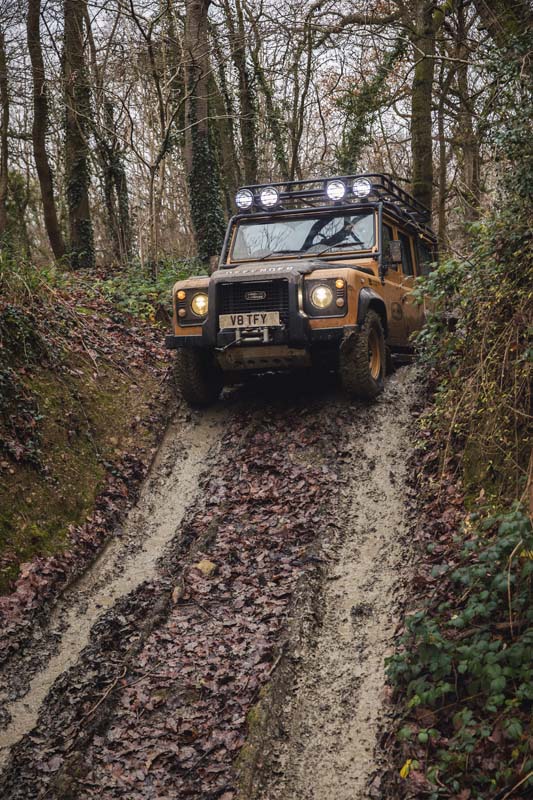 If you don’t like modern safety tech, you’ll love the Defender Works V8 Trophy, as it has no airbags, hill descent control, traction control, reversing camera or other aids – safety rests solely with you! 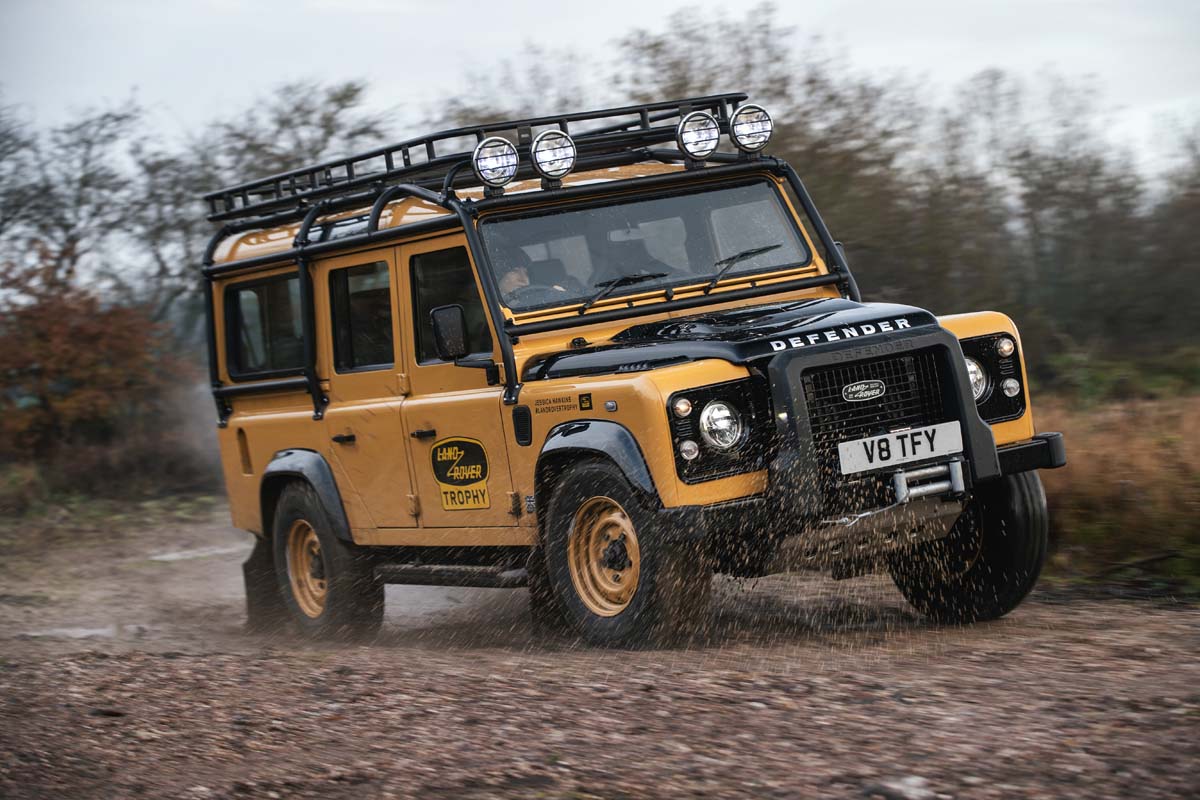 List pricing of £195,000 (AU$350,000 approx.) is staggering, but on par with past Land Rover Classic product. Despite this hefty price tag, the entire 25-unit allocation sold out within three days of the order books being opened.

While the Defender Works V8 Trophy is already exclusive, Land Rover Classic aims to add to that exclusivity by inviting all purchasers to take delivery of their vehicles later this year at a special three-day adventure competition at Eastnor Castle in Herefordshire, UK, where an abundance of Land Rover testing and development has been conducted over the years.

For the first drive in their new vehicles, those purchasers will take on Camel Trophy-inspired challenges through the hills and trails around Eastnor, with expert one-on-one tuition to help rookie off-roaders develop their skills. A range of prizes will be on offer, including a secret “grand prize” to be announced closer to the event.

The all-new Defender will be part of the occasion, too, along with selected Land Rover brand partners.

“Experiences are a key part of Land Rover Classic’s DNA and this whole concept comes directly from feedback we’ve received,” Pink added. “Our customers want to create their own stories, battle scars and patina with their Works V8 Trophy vehicles from day one, fuelling campfire chats with like-minded enthusiasts.

“We’re looking forward to an exciting and memorable event, full of camaraderie, and continuing the Land Rover Trophy legend for years to come. Seeing these vehicles traversing the hills at Eastnor will be a defining moment of the adventure.”