One of seven concepts presented by Stellantis North America’s (née FCA/Chrysler) Mopar parts division at the 2021 SEMA automotive aftermarket industry trade show in Las Vegas, the ‘Kaiser Jeep M725’ was based on a vehicle from a time before Jeep was part of the Stellantis or Chrysler empires, and even predates Jeep’s American Motors era. 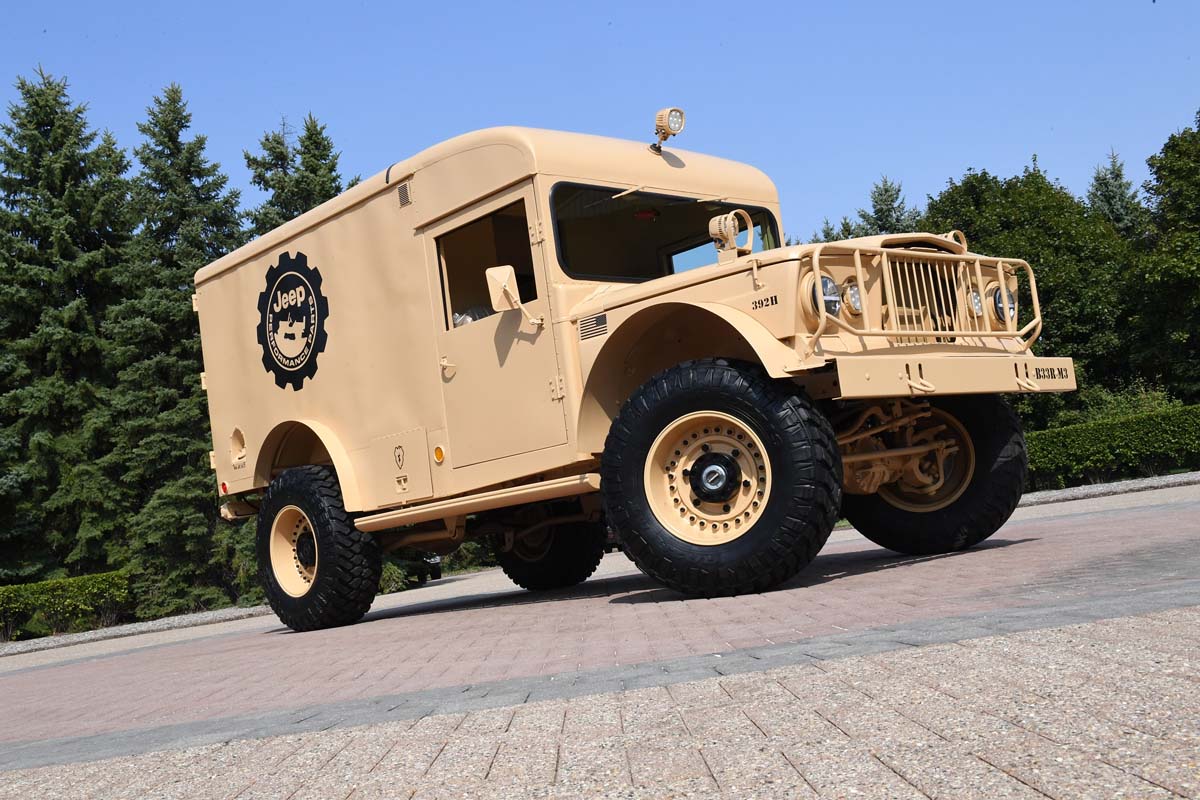 For those not familiar with this part of Jeep history, the ‘Kaiser Jeep’ marque was born from the merger of Kaiser Motors and Willys-Overland in 1953. Both brands were small-time players compared to the likes of Ford and General Motors back then, so a merger made sense in terms of sharing resources and costs. The pair continued to produce cars under their respective brand names for a couple of years thereafter, but in 1955, both abandoned passenger car production in order to focus on Jeep and Jeep-based four-wheel drive utility and recreational vehicles exclusively. These were proving to be far more lucrative for Kaiser/Willys, as most other American carmakers weren’t operating in this space, so competition was minimal. 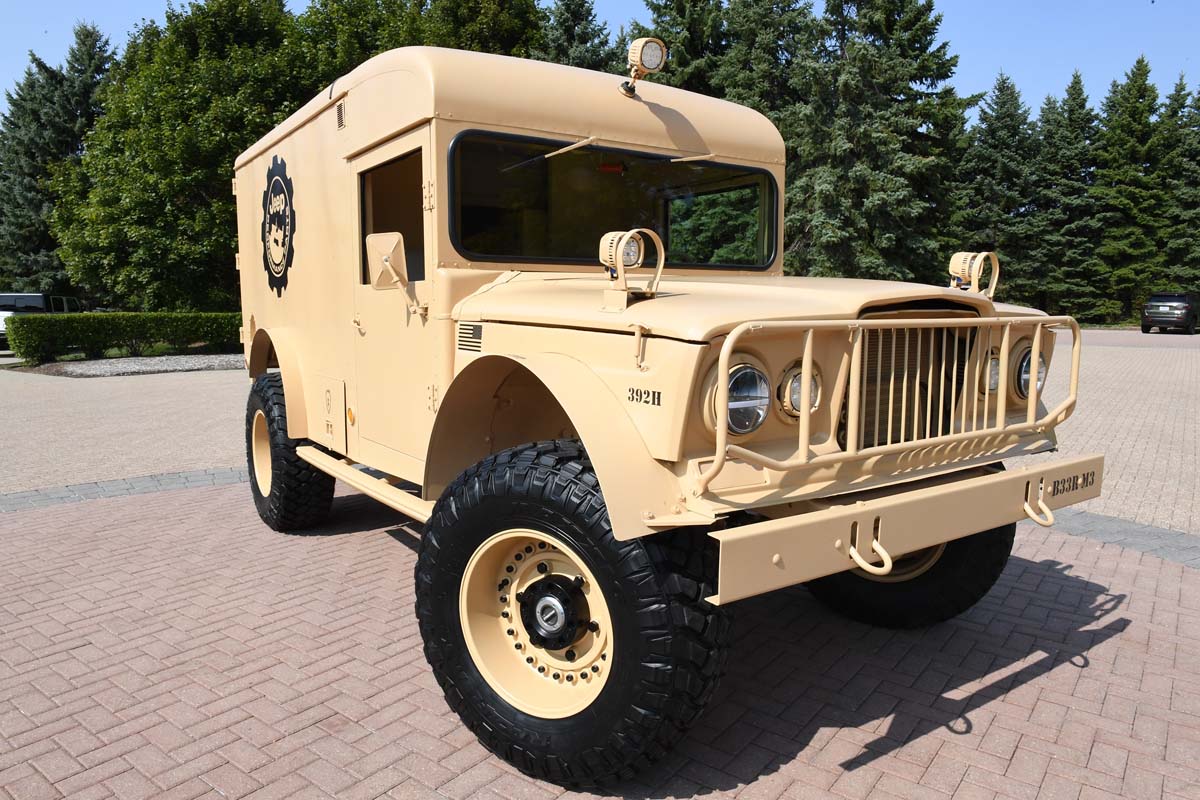 The Kaiser Jeep M725 concept presented at SEMA continued military-inspired styling themes seen in past customs created by Mopar for both SEMA and the annual Easter Jeep Safari in Moab, Utah. In this instance, the concept’s base was a genuine 1967 Kaiser Jeep ‘M725’ military four-wheel drive ambulance, which was a derivative of the M715 1 ¼-ton truck.

For this concept, the ambulance was remade in the style of a food truck, with a bar, food storage and pop-top roof added to create what Mopar called “the ultimate off-road support machine and rolling mascot for Jeep Performance Parts (JPP).” 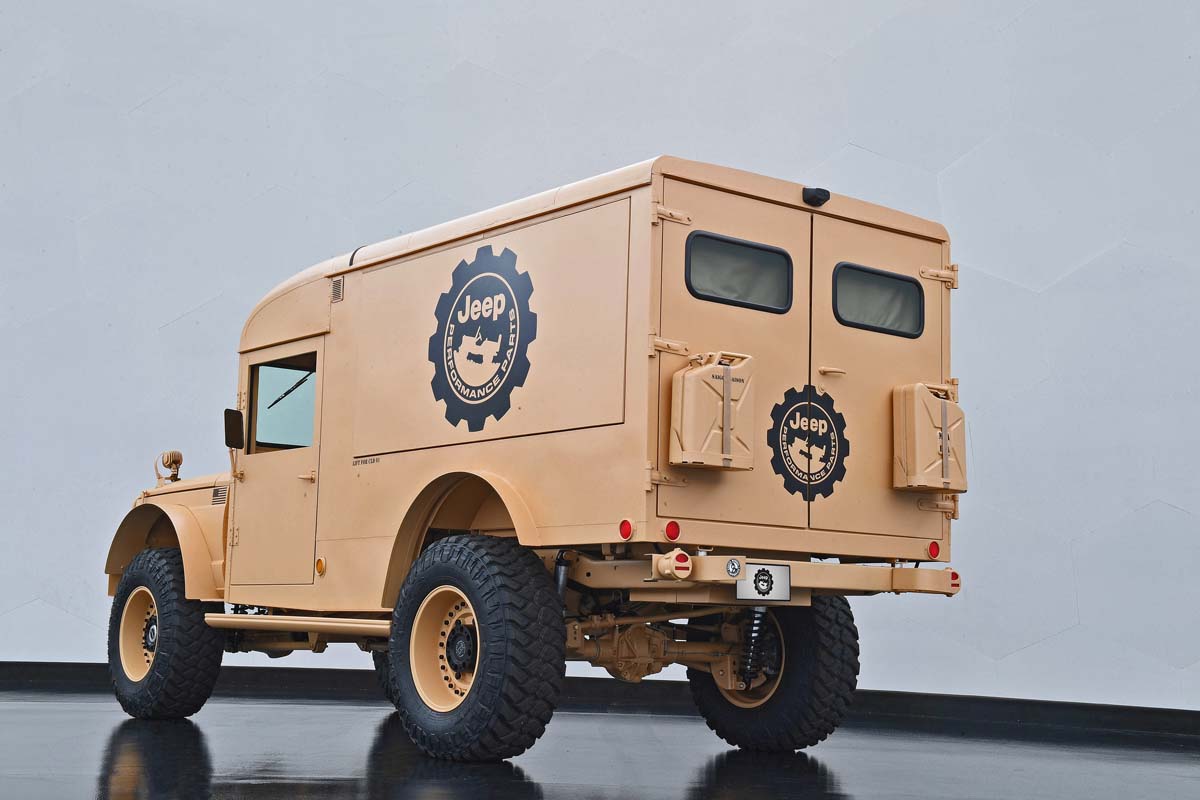 Finished in Desert Tan paint and rolling on 20-inch Black Rhino ‘Armory’ wheels with fat 40-inch tyres, the M725’s wheelarch flares were extended on the concept to suit the chunkier wheel-and-tyre combo. The high ground clearance was a standard feature on the M725, so access the rear of the vehicle necessitated the use of a fold-down step ladder, which was retained for the concept. 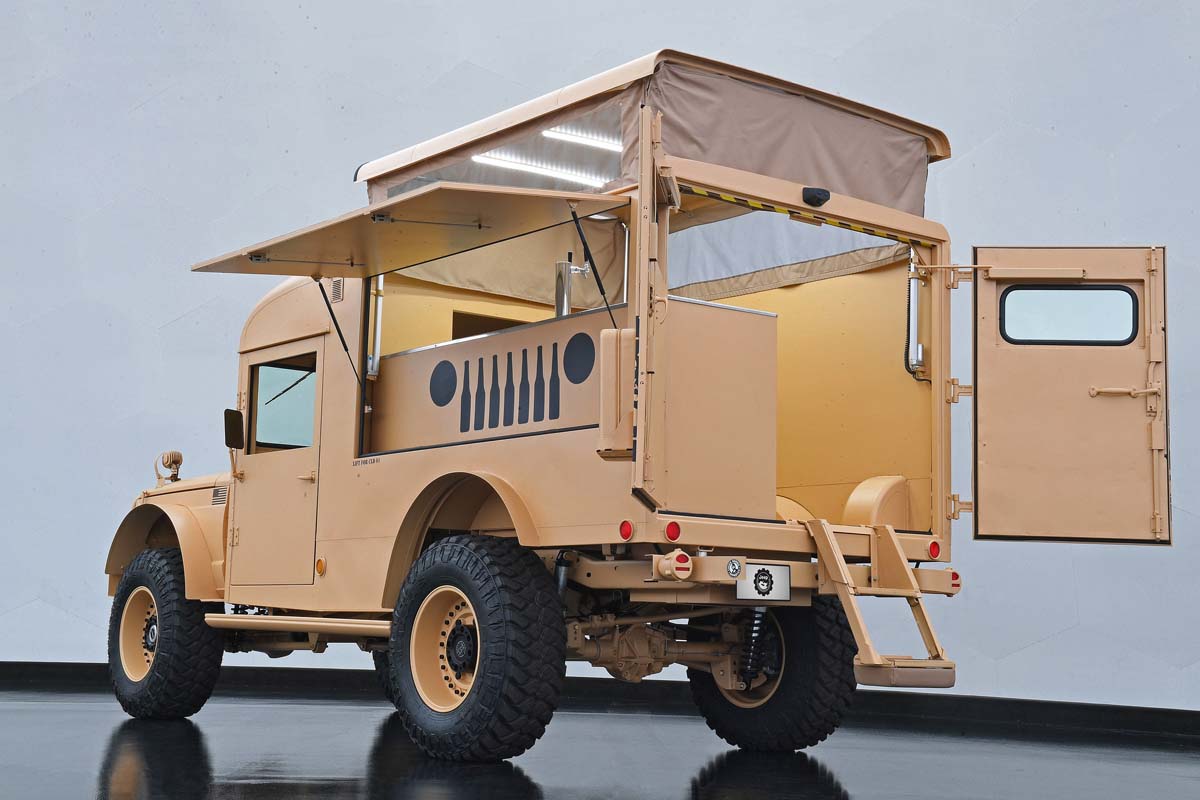 Off-road capability was enhanced with reinforcement of the chassis and swapping out the original leaf spring suspension for modern heavy-duty coils in a multi-link set-up.

The M725’s lighting was also modernised, with LEDs fitted all round, including Mopar concept 7-inch headlights, JPP 5-inch auxiliary lights and a roof-mounted JPP 5-inch spotlight.

Rock rails covered in Durabull bedliner coating were added, too. 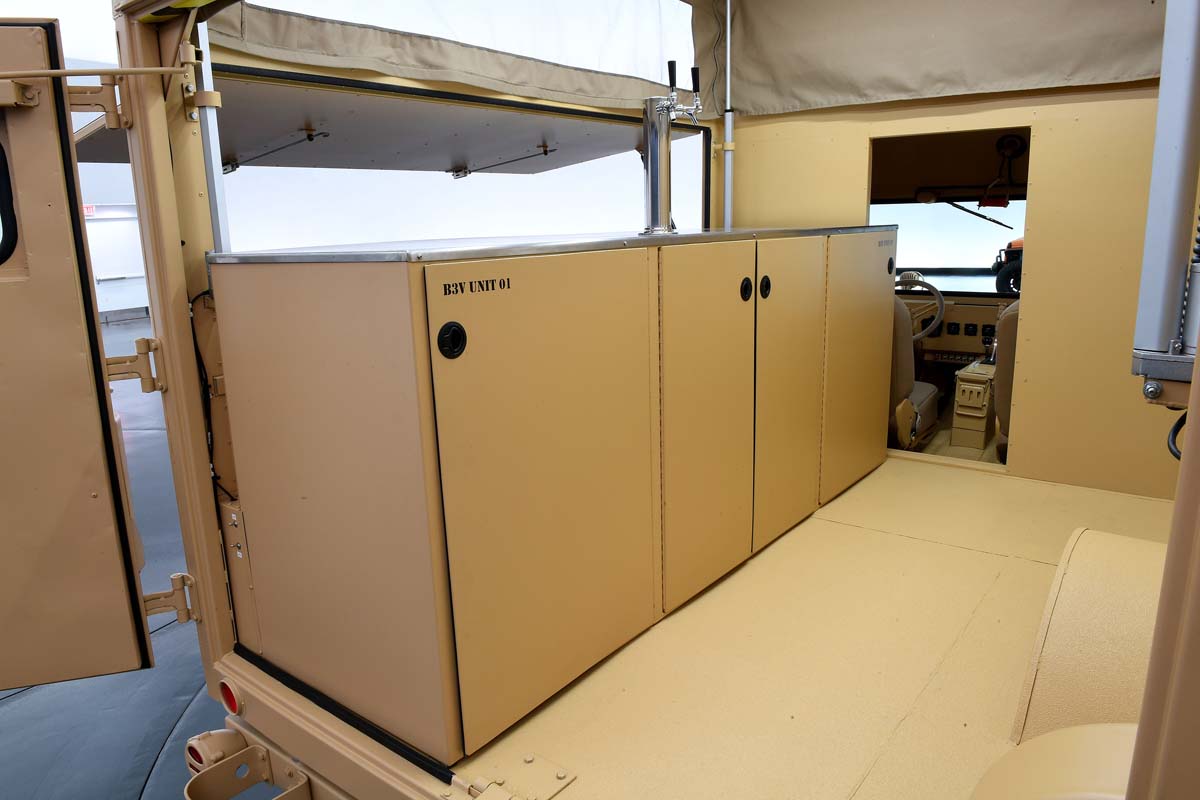 In the rear of the vehicle, Mopar replaced the stretcher racks and medical equipment with abundant storage space for beverages, snacks and supplies, while the addition of a pop-up roof panel - extending 16 inches (406mm) and with canvas sides and mosquito netting - allowed for stand-up convenience inside.

A pair of bar-style taps for drinks were added, while a large opening panel on the concept’s nearside works as a serving area. 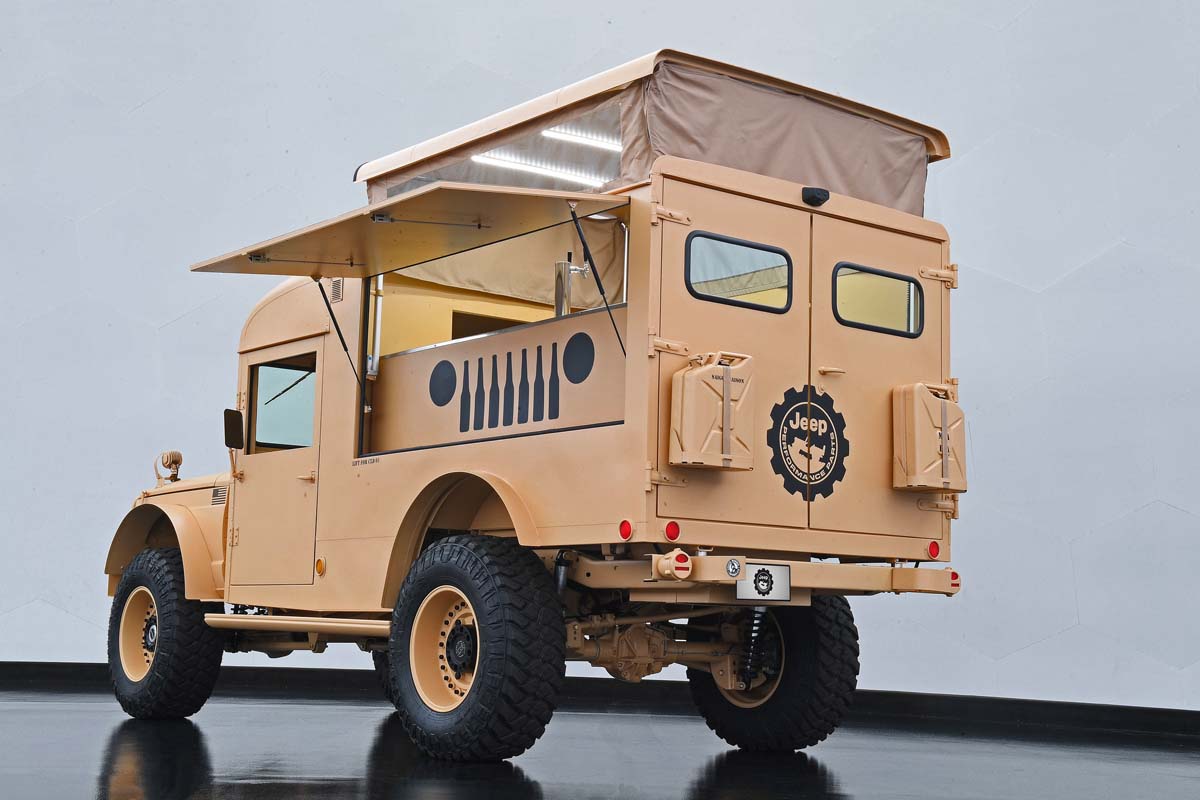 The same Desert Tan paint used outside was applied throughout the bar area, while a clever reinterpretation of the Jeep signature seven-slot grille logo saw beer bottles replace the grille openings. A much cooler logo, though, was the ‘Chuck Norris Approved’ sticker on the rear bumper! 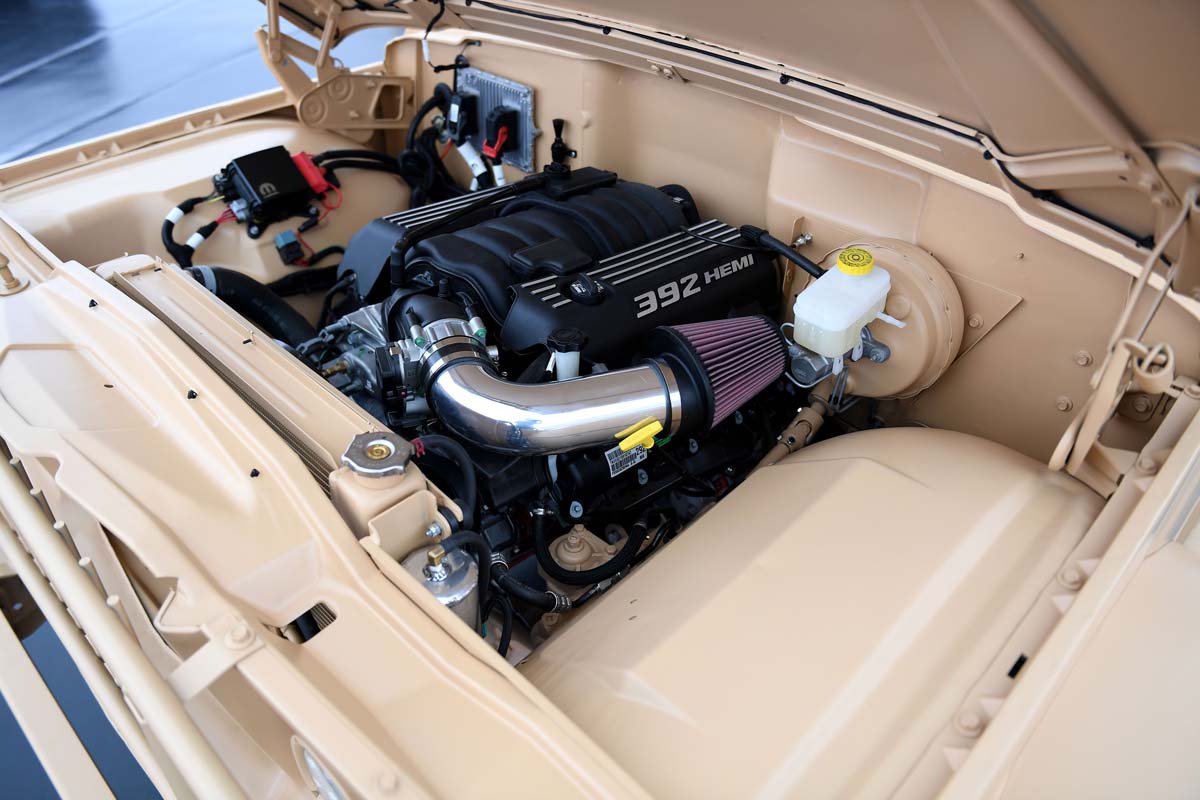 To power the Kaiser Jeep M725 concept, Mopar selected a potent replacement for the original 3.8-litre inline six engine in the form of one of their modern 392 HEMI V8 crate engines, matched to a TorqueFlite 727 automatic and producing a claimed 485hp and 475lb/ft (362kW and 644Nm). 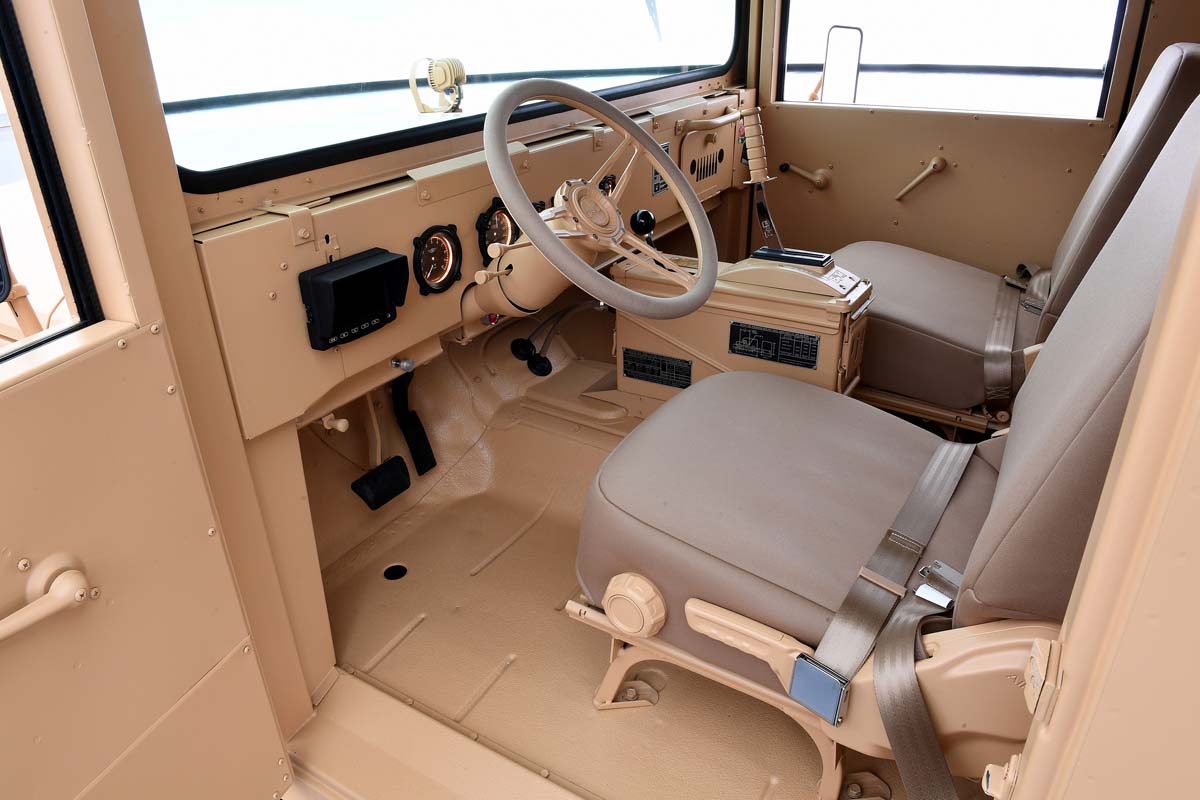 In the cabin of the M725 (that can be accessed from the rear of the vehicle), grippy bedliner coating was applied to the floors, along with more Desert Tan paint. Low-back bucket seats from a Wrangler were added, along with a custom steering wheel and column.

A set of new, backlit gauges modernise the instrument panel, with a display screen for the built-in reversing camera also added to the dash. 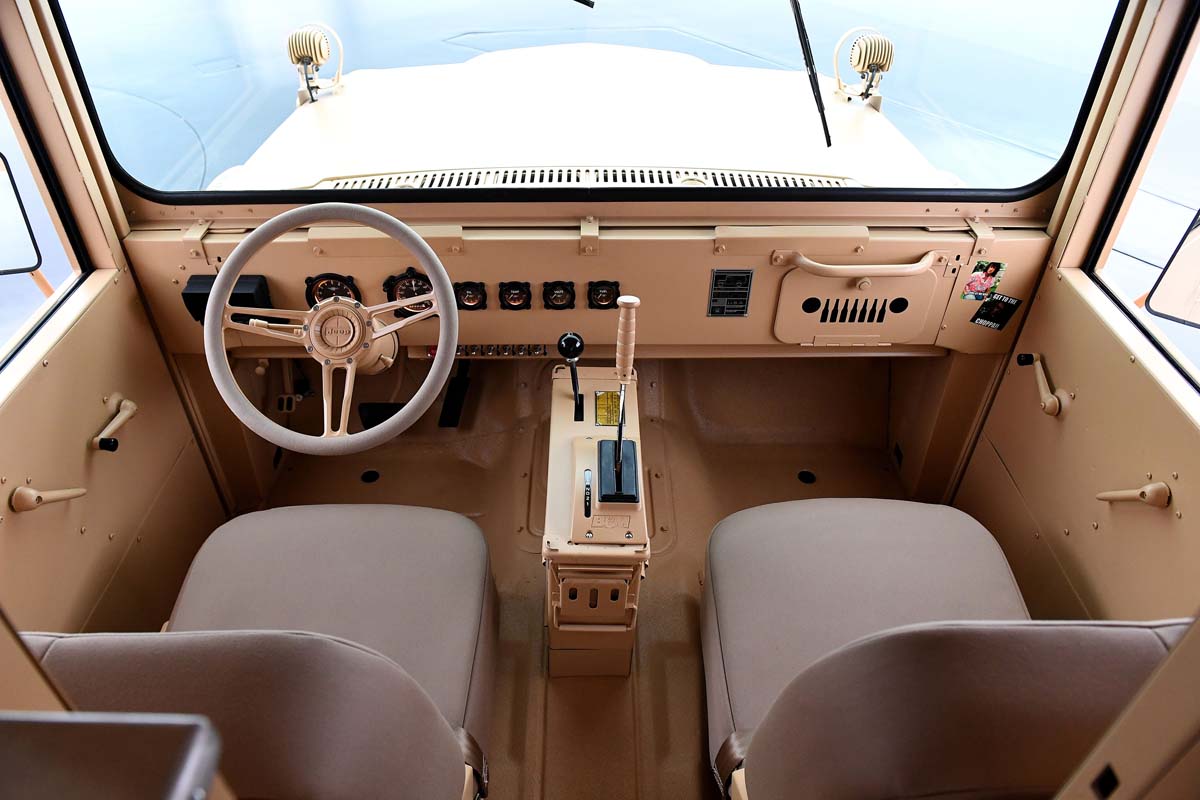 A data plaque on the dash showed the unique specifications of the Kaiser Jeep M725 concept, while a more specific nod to this vehicle’s military origins came in the form of an ammunition box reconfigured to carry the shifters for the B&M transmission and two-speed transfer case. 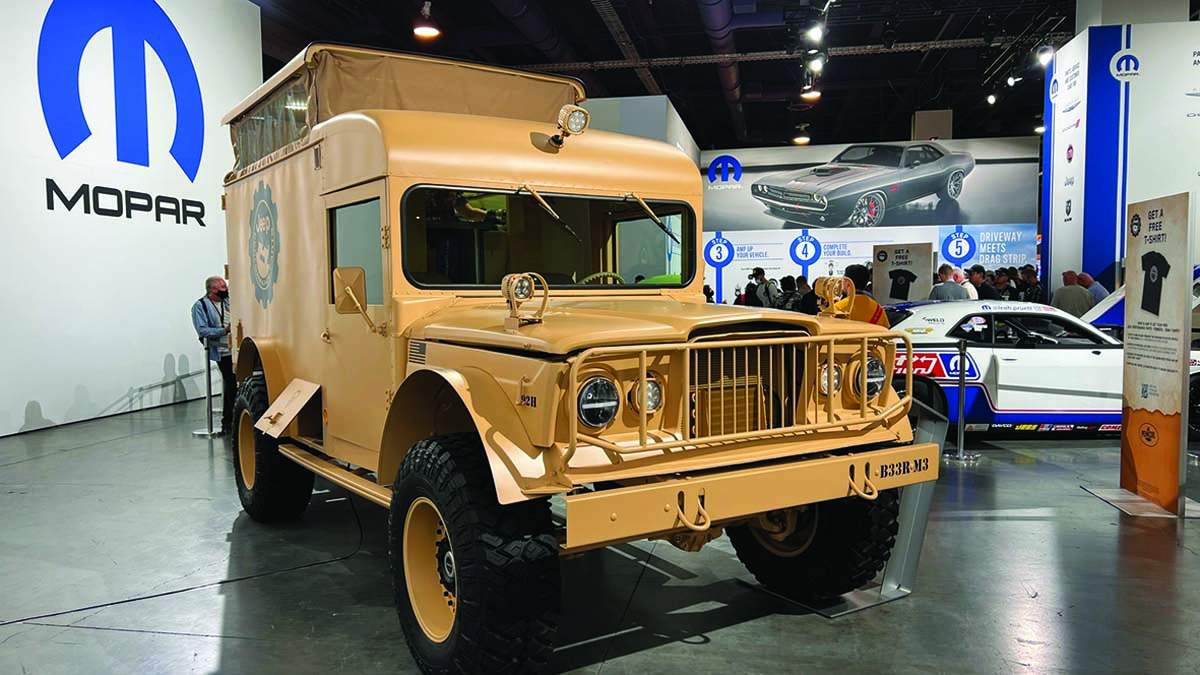 If military-themed, go-anywhere 4x4 custom builds – with a bar in the back – are your fancy, then the Kaiser Jeep M725 concept was perfect! This, along with the other six all-new creations unveiled at SEMA, proved that Mopar’s concept game is as strong as ever.