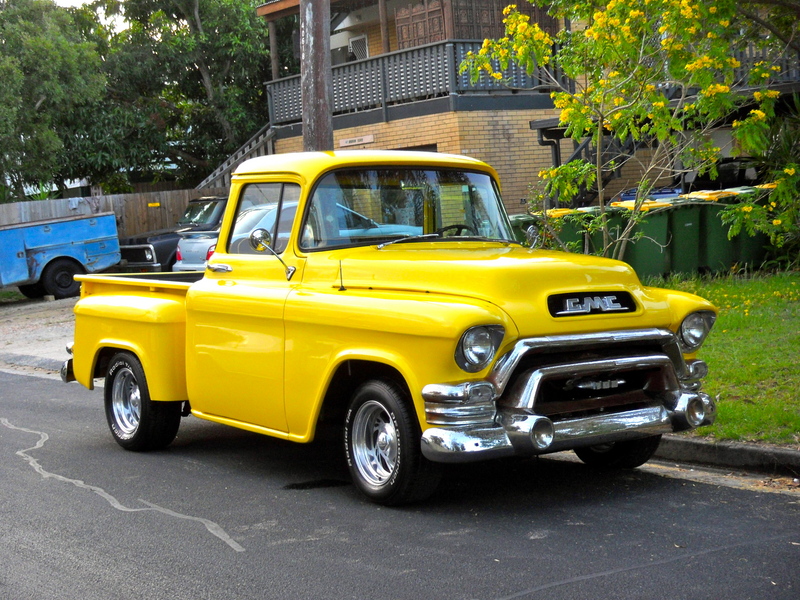 The basic design for the cabin and load bed was shared across both GM divisions, but each carried significantly different grilles, as well as different badging and other detail changes. GMC pickups featured a distinctive 'double arch' grille, which was integrated with the front bumper via a pair of large, bomb-style overriders. The 'GMC' badge was recessed into a special panel cut out of the leading edge of the bonnet, comically called a 'jet-air scoop'. The GMC badge itself was redesigned from the 1954 models and repeated on the front guards, aft of the wheelarches. If the optional V8 engine was fitted, 'V8' badging was also carried on the front guards. The jet theme continued with a 'Jet Stream' ventilation grille ahead of the windscreen that ducted constant fresh air into a plenum chamber, then into the cab itself. The overall cabin styling was dubbed 'Speed-Line' due to the forward slant of the headlights and windscreen A-pillar. Moving the running boards inside the doors further added to the modern, streamlined appearance of the cabin.

While most GMC pickups were powered by inline 6-cylinder engines, V8s were made available across the entire range for the first time in 1955. With no V8 of their own, and none in the immediate pipeline, GMC sourced a 287ci unit from Pontiac for their light and medium duty pickups, and an Oldsmobile 324ci V8 for their heavy duty trucks. Six cylinder engines, which powered the majority of light duty pickups, were only mildly modified for 1955, with a new crankshaft damper and different front mountings being the main changes.

Inside, the cabins on the Blue Chip models were equipped more like cars. The seat was better padded and fully adjustable, and a wraparound front windscreen was common across all models, with the option of a wraparound rear 'screen, too. The instrument panel, while still very much truck-based, featured round gauges in a redesigned cluster called 'Aero View' with non-glare textured paint. Optional 'Deluxe' trim featured a two-tone interior in green, blue or brown, driver's side armrest, passenger side sunvisor, chrome-surround instrument cluster and control knobs. On the outside, Deluxe-spec cabins received stainless steel windscreen and side window trim, full chrome bumpers, grille and chrome hubcaps (non-Deluxe models featured painted bumper, grille & hubcaps). A special "debadged" version with lightweight grille and basic interior trim was also available for fleet buyers.

The changes across the 1955 range proved to be a big hit with buyers, with GMC recording a record production year and the largest year-on-year sales gain to date.

Much rarer than an equivalent-era Ford or Chevy pickup, GMC pickup trucks stand out due to their unique style. With the right engine/transmission combo, they're practical as a work vehicle or racecar hauler, too. Deluxe-optioned pickups are far and away the most popular of the small number of GMCs seen for sale in this country, as the chrome grille looks far better than a painted one. Many have also been treated to aftermarket engines, tyres, interior trim, paint and more, creating real 'street trucks'.

The rarest of the Blue Chip GMCs for 1955 was a 100 Series-based GMC equivalent of Chev's Cameo Carrier, called the 'Suburban' (a name it shared with GMC's pickup-based wagons/people carriers). Like the Cameo, the Suburban pickup featured a styleside rear, made by fitting fibreglass side and tailgate covers over a stock stepside tray. Two-tone paint was standard, as was deluxe interior trim and wraparound rear windscreen. Three different choices of transmissions were available, plus an optional V8 engine. GMC's Pontiac-sourced V8 produced slightly more horsepower than the equivalent Chevy V8 used in the Cameo Carrier. Only 300 Suburbans were produced, and for the 1955 model year only, making them super-rare today. 1955 marked GMC's first real foray into the showcar field with the "L'Universelle" concept - a low profile, forward control delivery van of VW Kombi-style dimensions that was actually based on a Buick chassis and powered by the same V8 engine that went into regular GMC pickups that year. Of interest was the bi-fold side access door, which hinged horizontally near the roofline. GM claimed the design was flexible enough to convert into a station wagon, taxi or even a small bus. 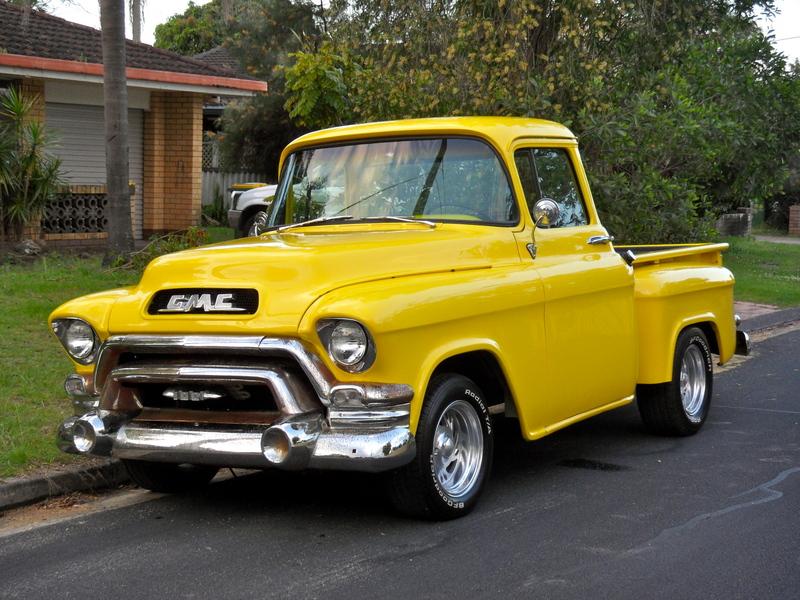 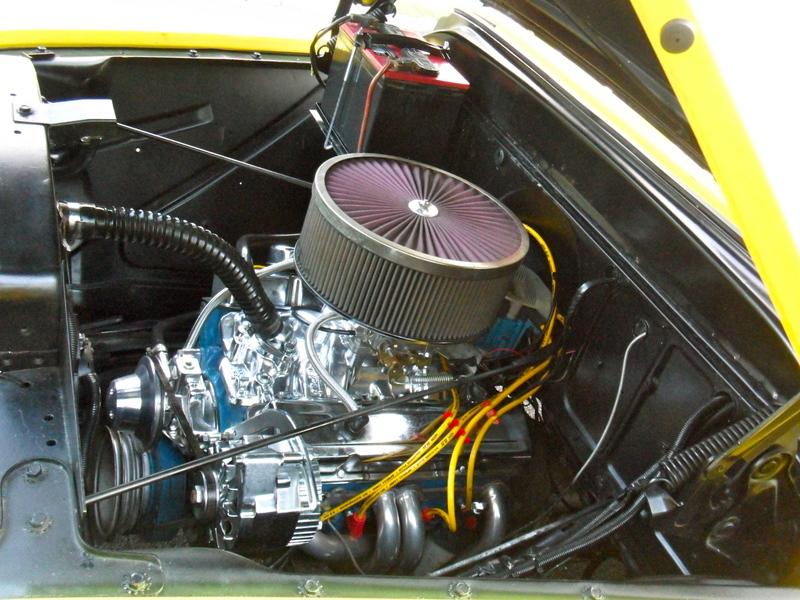 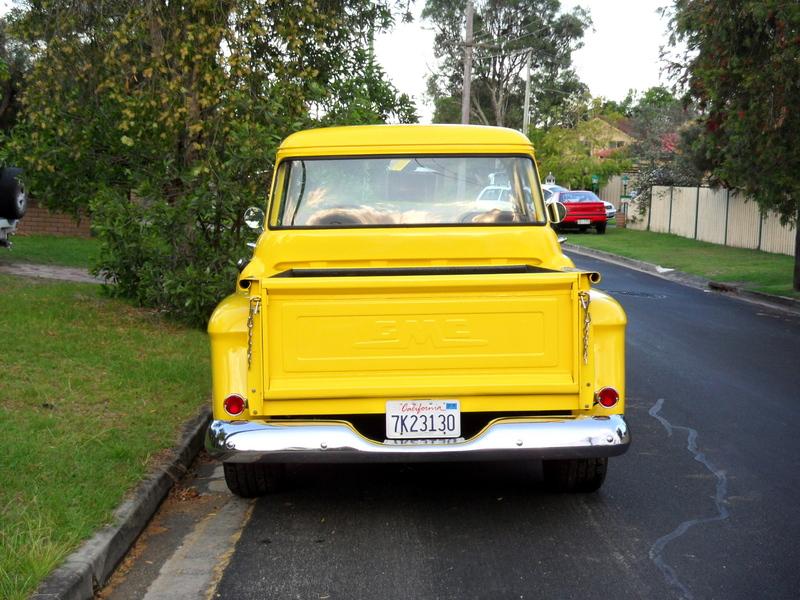 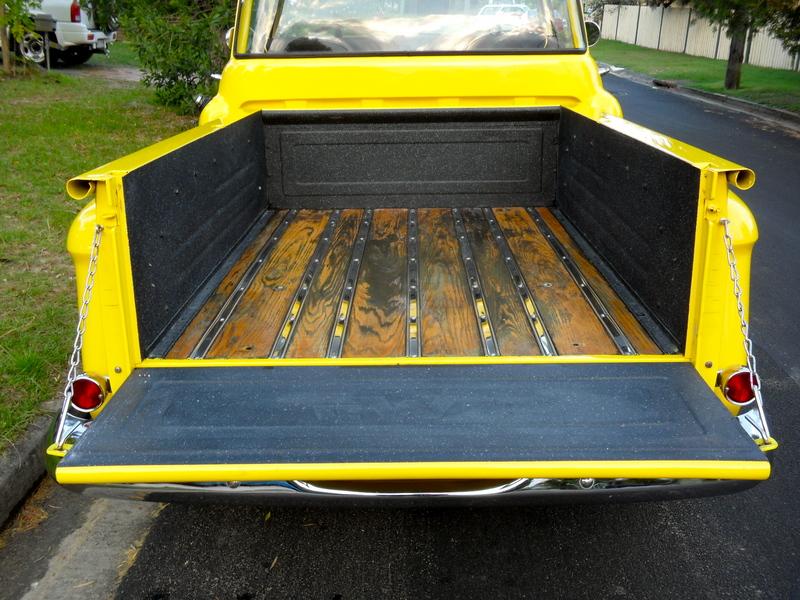