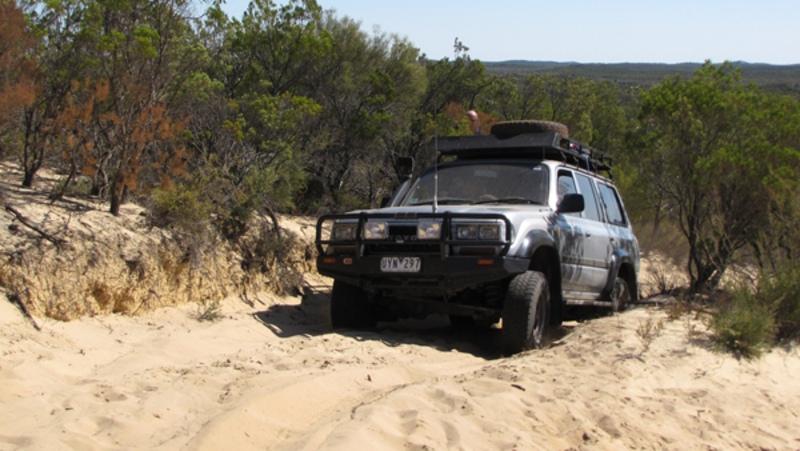 For a taste of the Outback, an interesting and relatively isolated region is the western extremity of Victoria where it joins South Australia. For much of the State border between the two States, a track - which four-wheel drivers naturally call the "Border Track" - runs south from the Murray River.

The Border Track runs between these two major roads north-south along the State border. Running inland in Victoria there is an adjacent track - the Millewa South Bore Track and the Taparoo Track which joins the Sturt Highway in the north.

Much of the Victorian side of the route is part of the expansive Murray-Sunset National Park, a large sandy expanse that has a number of easy to medium standard 4x4 tracks running through it.

While this northerly section of Border Track is the most frequently driven by four-wheel drivers, the border track actually extends much further south from Pinnaroo, ending roughly 20-30km north of Serviceton on the Western Highway. Sections of the border track traverse the Big Desert Wilderness Park of Victoria, while tracks run adjacent to the border on the South Australian side through Scorpion Springs Conservation Park and the more southerly Ngarkat Conservation Park.

An interesting aside is the fact that the State border is actually not quite where it should be, with a dispute arising from the original survey completed between 1847 and 1850 concluding that the actual border is sited 3km too far west.

‘Sunset Country’ is the moniker adopted to embrace the Murray-Sunset National Park. This is partly to do with the fact the area is renowned for spectacular sunsets/sunrises, the semi arid nature of the Mallee landscape, and the fact that Mildura enjoys more sunny days than even the Queensland Gold Coast.

While the Border Track can be joined at a number of locations along its route, the most northerly point is at the State Border on the Sturt Highway some 130km west of Mildura and a few kilometres from the SA township of Yamba. From the highway, the track heads diagonally south and offers drivers a great experience and an interesting drive. It mostly runs along the border fence, but occasionally dips inland to avoid obstacles.

To drive the northern section of the Border Track, the track can also be reached from the south, turning north off the Mallee Highway between Murrayville and Pinnaroo.

As per other 4WD touring trips in more isolated areas of Australia, vehicles should be self-sufficient, carrying supplies, tyre repair kit, air compressor, and recovery gear. As much of the going will necessitate four-wheel drive, allow for higher fuel consumption, and carry addition fuel if necessary.

Much of the track is sandy, ranging from soft and loose; in other areas the track is interrupted by clay soils, where there can be firmer sections, including bog holes. Soft sand is found on the tracks along with corrugated sections.

There are also a number of reasonably challenging sand dunes, some without a long run up, making them more difficult than they otherwise would be. Drivers should deflate tyre pressures and despite the low probability, be aware of the possibility of vehicles coming from the other direction. Sections of the track are overgrown so expect some scratching to panels in tight areas.

Also be aware that some sections of the track operate on one way restrictions from North to South.

A standard tank of diesel should be sufficient, with fuel available mid-way at Pinnaroo or Murrayville.

The Ngarkat Conservation Park comprises four contiguous reserves and abuts the Big Desert Wilderness Park in Victoria. The area is classed as a semi-arid dunefield that has dense Mallee scrub over most of it. Importantly, much track maintenance and restoration work has been carried out by Four Wheel Drive South Australia and their member clubs, saving 29km of the track from permanent closure. Each April, eight South Australian 4WD clubs visit the area and conduct maintenance works.

From the north-east corner of Ngarkat Conservation Park, the Border track is restricted to one-way access from North to South. At the junction of the Border Track and the Centre Track (approx 29km down the Border Track), the track reverts to a two-way system. The one-way system has been implemented to protect the sand dunes, track surface and vegetation. The original fence line track is in poor condition and SA Park authorities ask that visitors use the alternative Centre Track. From Pinnaroo, travel along the Rosey Pine road to Pine Hut Soak just inside the park boundary where there are picnic tables, camping areas and toilets. From here, head south on the Centre Track across extensive native pine covered sand dunes. The Centre Track is well signposted and brings you onto the original Border Track further south, where you'll travel along the border beside the old dingo fence. This section of the Border Track can be difficult and it is a good idea to tackle it only in the company of other four-wheel drives.

From the Dogger's Hut camping area you can either return to the bitumen via Shaugh Track or continue south to Red Bluff and the Murrayville Track in Victoria. While the southern length of track is relatively short, around 50km, it is easy to spend a couple of days for photo stops and an overnight camp.

The Mallee parks and Border Track should only be visited in the cooler months of the year - never during high fire danger periods - with autumn and spring the best time to visit. There are five camping areas along the remote Border Track, along with numerous others off the track in the Murray-Sunset Park. No permits are needed to travel the track, which is well defined and generally follows the border, although there are some deviations around overgrown sections.

This is an extremely interesting area to visit and travel through, and along with the surround parks, it is easy to spend several days exploring the area. 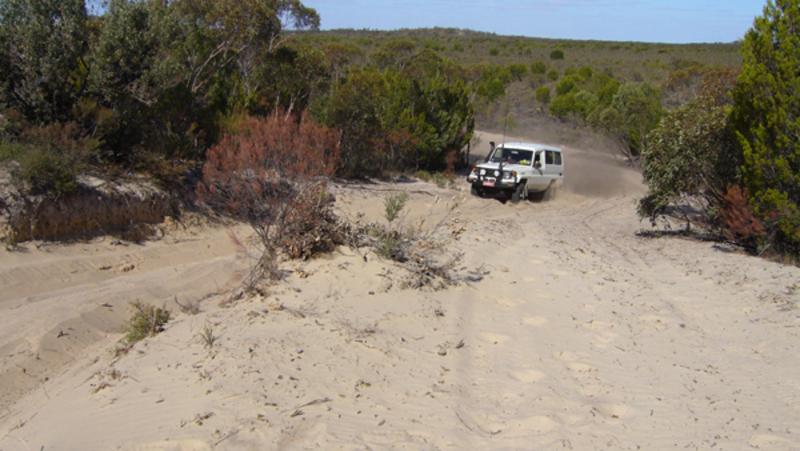 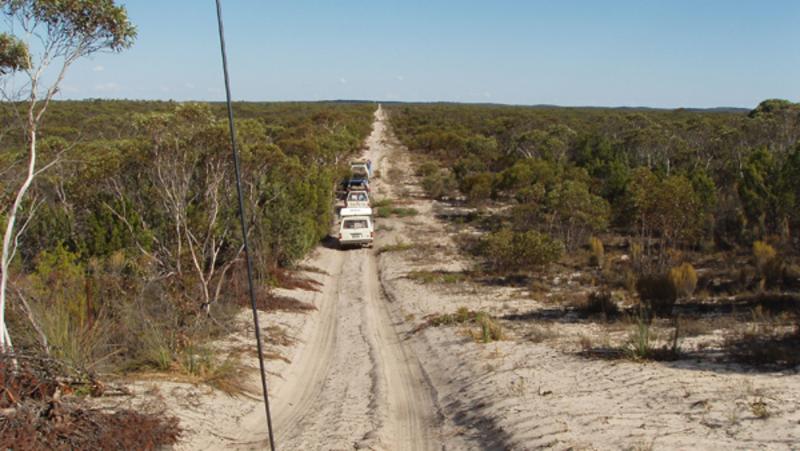 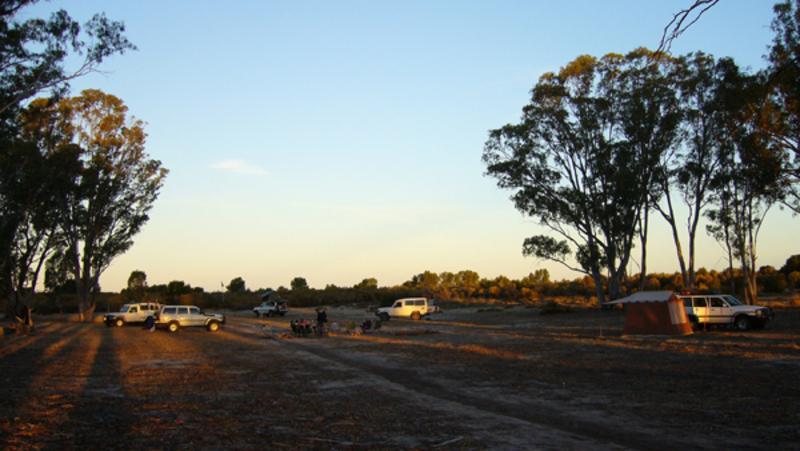 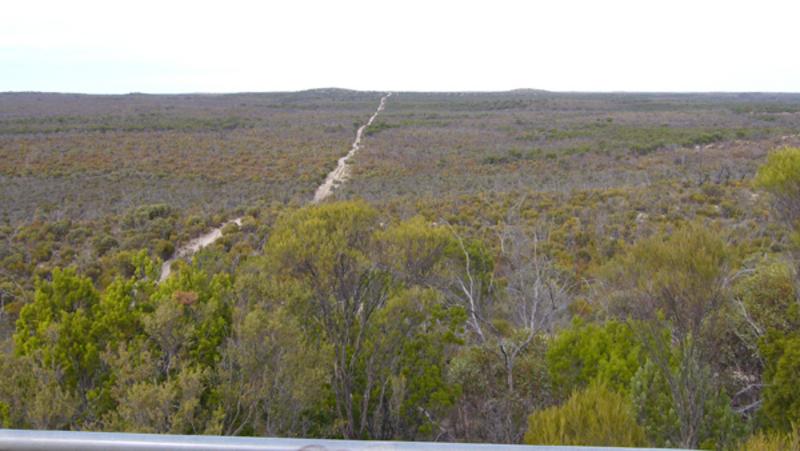 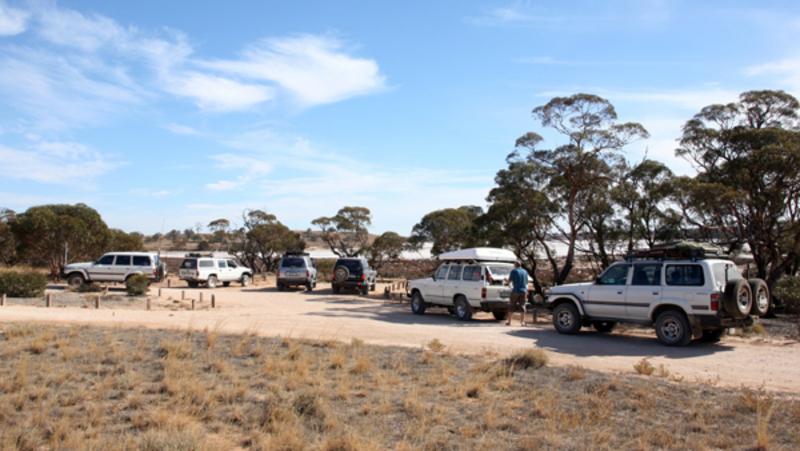 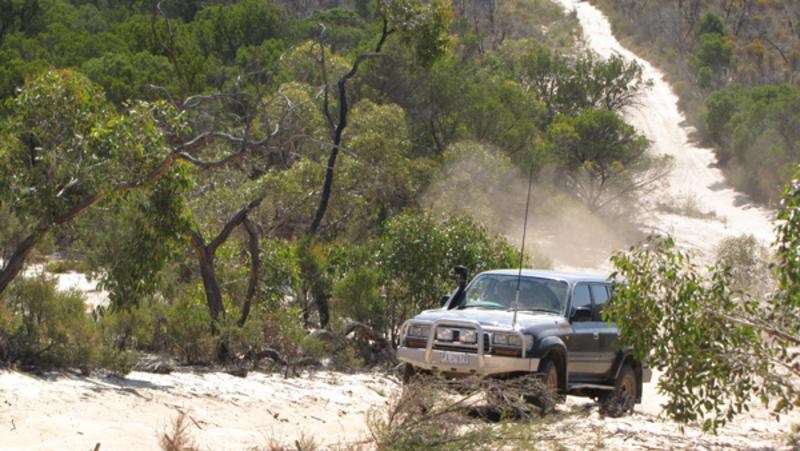