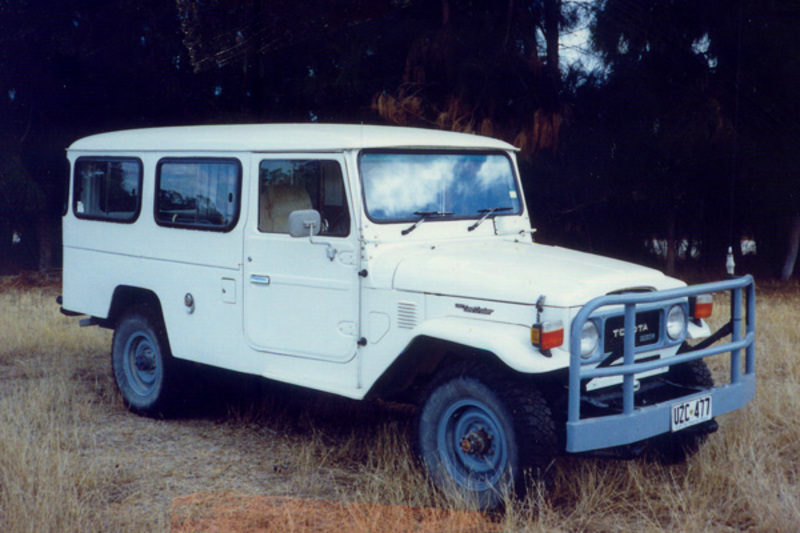 The Troop Carrier is not for everyone, and started life as a real ugly ducking in the Toyota range
When it comes to large 4WD workhorse people movers, Toyota's Troop Carrier has the market stitched up!

The Troop Carrier is not for everyone, and started life as a real ugly ducking in the Toyota range. The "Troopy" as it is generally known, is a high roof, long wheelbase carrier that depending on configuration can seat 11 in the back, or accommodate a prodigous cargo. It found its niche in heavy working environments as a people mover, but due to its massive interior capacity has become a popular recreation 4WD vehicle.

1977 FJ45 LWB
The first LWB Troop Carrier version of the FJ45 was introduced in Australia in 1976, with a petrol engine and a canvas top. It was 520mm longer than the FJ43. It was basic in appointments with single driver's seat and passenger bench seat. The canvas top had two perspex windows each side and one above the rear tailgate. Each section was connected by zippers and could be independently rolled up. Standard doors were fitted, although the soft top could be completely removed if necessary. It was equipped with fully floating rear axle, protective shields around rear light assemblies, and underbody plates for protection.

A hardtop Troop Carrier was added to the lineup in June 1979 with a choice of either petrol or diesel engines. The FJ45 LWB cab chassis was the first vehicle to receive the new 2H diesel engine, and it received a new identification number, the HJ45 to match it with its H series diesel engine.

1979 HJ45 Troop Carrier
The HJ45RV-KCQ Troop Carrier was Toyota's first ever hardtop long wheelbase and was promoted by Toyota as a personnel carrier. Two rows of double seats ran on each side length of the cargo area, with seating for 11. The hardtop Troopy was also available with petrol engine. The hardtop had two windows on each side, as per the format used on the soft top and two side-hinged barn doors at the rear.

The diesel engine had the same diff ratio and gearbox as the petrol model, and with 84-litre fuel tank proved an economical and long distance tourer. Interior comforts were upgraded with full headlining and more comfortable seats. There were 8 side sliding windows.

1985 70 Series Troop Carrier
January 1985 saw the release of Toyota's new 70 Series range. This update was comprehensive and included an updated LWB Troop Carrier which was both handsome and contemporary in design and features. This was the first major face lift that the Troop Carrier had received and the resultant body lines were clean, practical and modern. Far more than a new body the LWB model featured new powerplants and interior comforts, which made the popular Troopy even more popular as a recreational vehicle.

Inside the Troopy was functional, yet comfortable. Vinyl floor mats and practical trim suited the intended use of the vehicle. The driver received a fully adjustable bucket seat, while the front passenger had a two thirds width bench seat and rear side seating accommodated eight passengers. Access to the rear was via two barn doors.
For those utilising the Troop Carrier as a touring vehicle a factory optional 90-litre auxiliary fuel tank, on top of the standard 90-litre tank was a useful bonus. A fuel gauge for the auxiliary fuel tank was housed in a centrally mounted binnacle on top of the dashboard. The second fuel tank was activated by a push button switch located on the fuel gauge. Another factory option to aid long distance touring available, was an air cleaner extension snorkel.

1990 70 Series Troop Carrier
Toyotas range of 4WD vehicles was extensively revised in 1990 with the introduction of two new engines and another revamped. The new engines were the new generation diesel engines of five(1PZ) and six cylinder(1HZ). The petrol Troopy remained unchanged with the 4-litre 3F petrol engine, while the diesel variant was powered by the new 4.2-litre 1HZ diesel. Featuring single overhead cams, direct valve actuation, cross flow cylinder heads and other improvements to the cylinder block, the 1HZ displaced 4164cc and produced 94Kw of power at 4000 rpm and 271Nm of torque at 2000 rpm, 24% more power and 12% more torque than that produced by the 2H motor.

The six-seat 75 Series RV Troop Carrier was designed for the hardcore 4WD enthusiast who wanted traditional ruggedness with creature comforts to satisfy the needs of family motoring. 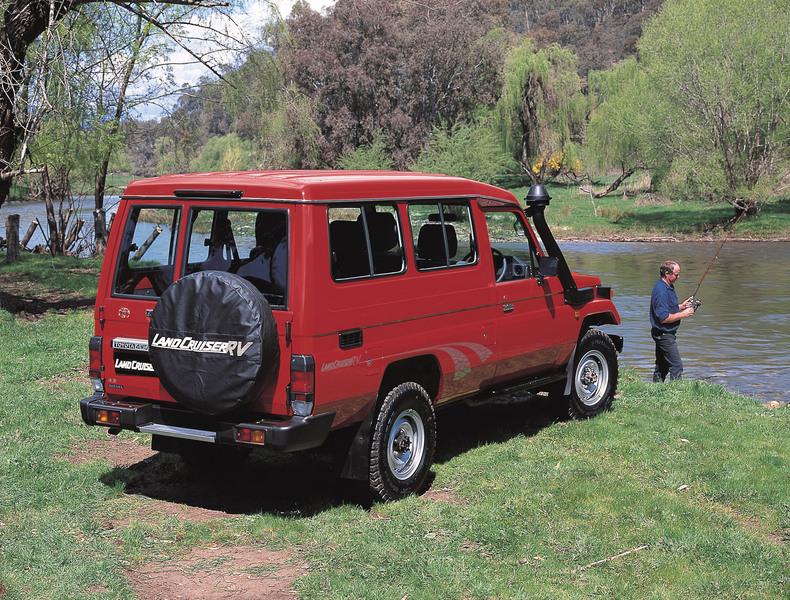 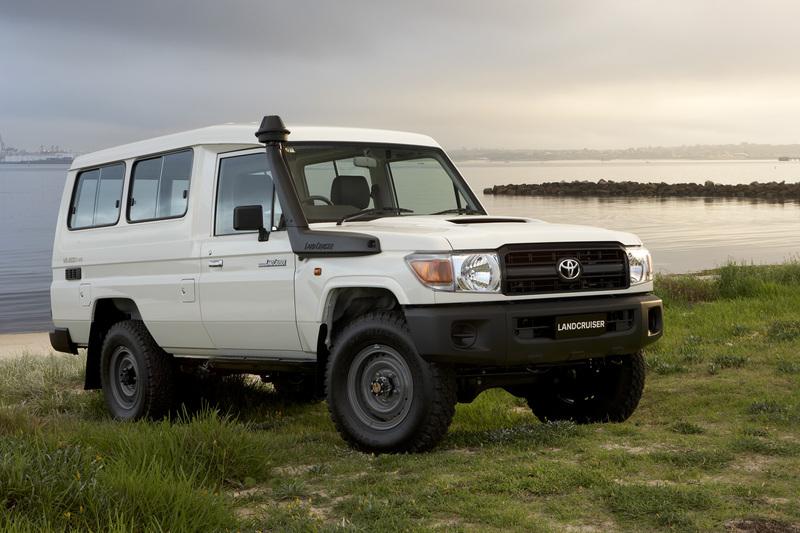 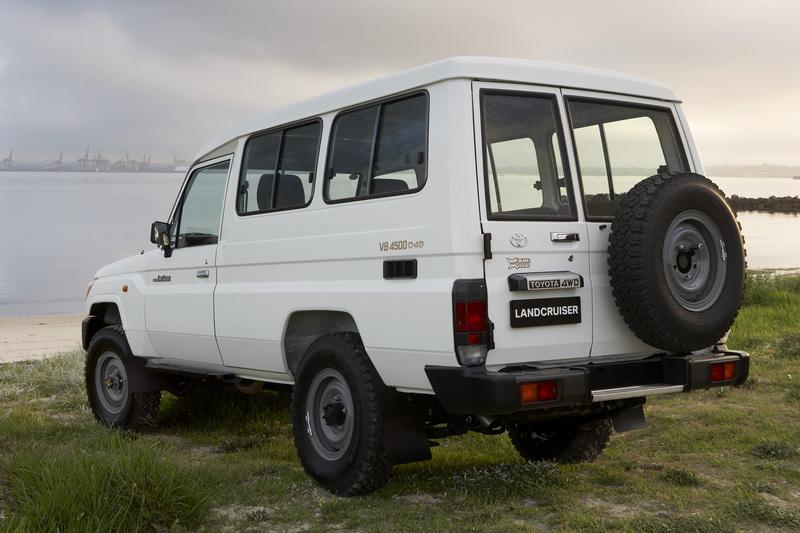 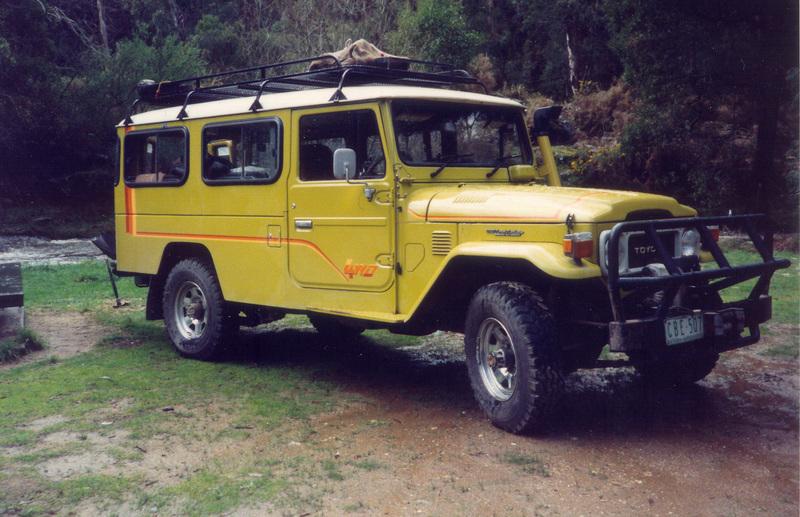