After years of hints, teases and speculation, the next-generation Toyota LandCruiser has finally been revealed. The ‘300 Series’ broke cover on 10 June at a live event in Dubai (the Middle East is one of the LandCruiser’s biggest markets) and brings a new look, along with some major changes under the skin. 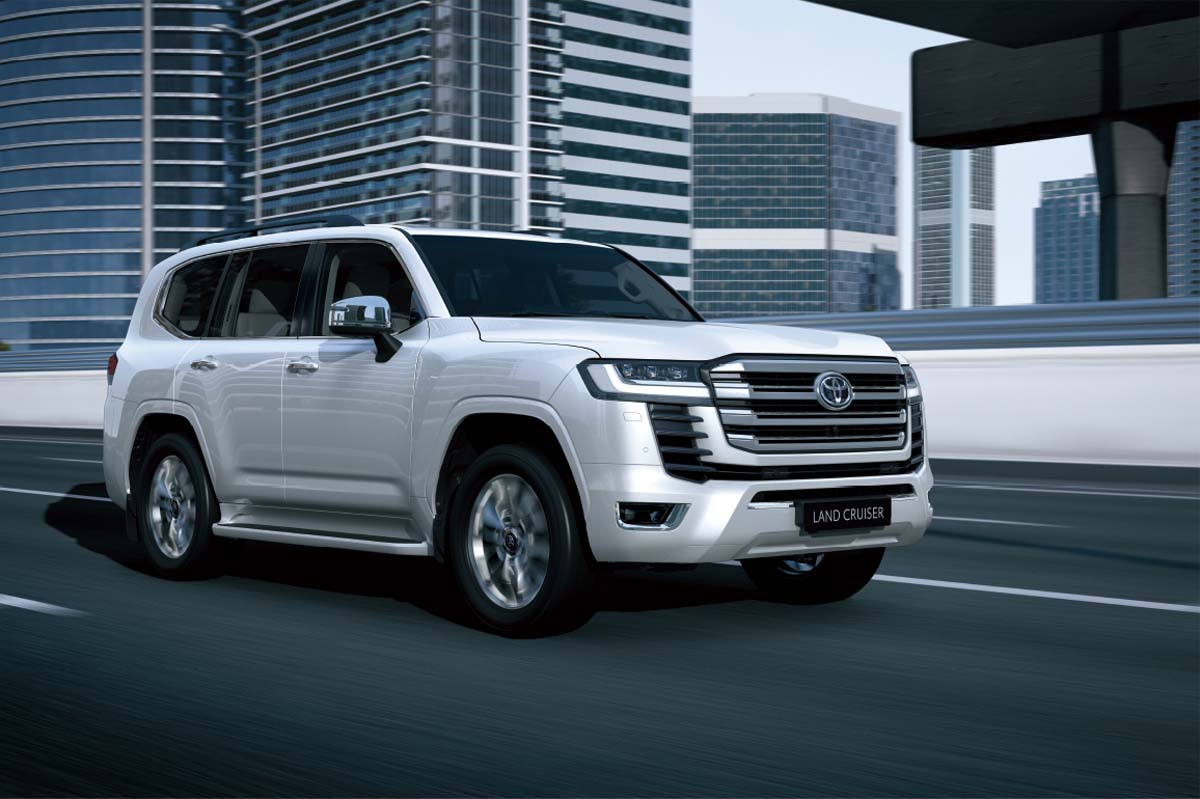 Toyota describe the new LandCruiser as a “giant leap forward in 4WD performance and technology” and “the most capable LandCruiser ever”. Bold claims, for sure, but one that early reports suggest is accurate.

Given this is the first all-new LandCruiser for 14 years, Toyota have had more than enough time to improve on the old 200 Series and it’s no coincidence that the new LandCruiser arrives in the 70th Anniversary year for the nameplate.

"In our quest to make LandCruiser tougher and more capable than ever, we have taken feedback from customers around the world. This includes extensive input from Australian owners who have experience in some of the world's harshest environments.”

The major change in specification of the LandCruiser 300Series over the 200 Series is in the powerplant. The 4.5-litre turbodiesel V8 is gone, replaced by a 3.3-litre twin-turbo V6.

Despite being smaller in capacity, the new engine outperforms the old one, with listed maximums of 227kW and 700Nm. This is a 13.5 per cent and 7.7 per cent increases on the V8’s 200kW and 650Nm maximums.

Toyota says the V6 is an all-new design that offers noticably lower fuel consumption and exhaust emissions compared to the V8, while also being lighter.

Full details on the engine and transmission, like most other information on the 300 Series, is sketchy at the moment, but detailed specs will be revealed closer to the new LandCruiser’s local release later this year.

While Australia will get this new engine and transmission combination, some markets will get a twin-turbo petrol V6 that produces a claimed 305kW and 650Nm, matched to the same 10-speed auto as the twin-turbo diesel. There are also rumours of a hybrid LandCruiser 300 Series, but if this comes, it’s likely to be some time away.

The 300 Series rolls on the TNGA-F (Toyota Next Generation Architecture) platform and is the first LandCruiser to do so. The claimed benefits of this platform include greater body rigidity, reduced mass, better weight distribution and a lower centre of gravity – elements that should make the 300 Series a better off-road vehicle.

This new platform contributes to an overall weight reduction of 100kg (more on alternative drivetrain variants), but dimensions are mostly unchanged and there’s still a separate chassis.

Conscious of the LandCruiser’s off-road reputation, approach and departure angles are said to be virtually the same as the outgoing 200 Series, with bumper design and lighting placement designed to minimize damage when off-roading.

Some of these measures, particularly approach and departure angle, will depend on the 300 Series variant, though, as early images suggest there will be a lower, more road-oriented GR version released under the 300 Series badge, as well as a luxury version.

Initial imagery shows three variants, including the aforementioned GR version, but whether this will be offered locally, and indeed if the existing GX, GXL, VX and Sahara grades will carry over to the new LandCruiser, are unknown.

Suspension has been redesigned to offer increased wheel articulation in rough conditions, with an all-new feature – and a world first, according to Toyota – being an optional electronic Kinetic Dynamic Suspension System (e-KDSS). Like the electronic front sway bar disconnect system available on some Jeeps, e-KDSS disables the front and rear stabiliser bars, thus allowing increased suspension stroke to suit specific driving conditions.

Another all-new feature for the LandCruiser is a Multi-Terrain Monitor that uses cameras to show obstacles in the path ahead outside of the driver’s eye view, allowing the driver to pick their way through challenging trails.

Permanent four-wheel drive remains, as does high and low range, as well as three locking diffs.

Early information on the 300 Series’ in-cabin specification suggest an upgrade on the centre console display screen from 9.0 inches to a landscape-style 12.3-inch screen, with satnav and Apple CarPlay and Android Auto connectivity, but Toyota haven’t gone mad with the screens – there’s still a healthy complement of switches, buttons and dials for things like the air con and off-road mode controls.

In the same vein, analogue main dials have been retained and bracket a 7.0-inch driver information digital display.

Other tech mentioned (but possibly not available on Australian market models) include a head-up display, fingerprint reader in the start-stop button and entertainment screens for the second-row passengers, mounted on the backs of the front seats.

On the safety front, the LandCruiser 300 Series will get the latest Toyota Safety Sense active safety package that includes a pre-collision system with pedestrian detection (daytime and night-time) and cyclist detection (daytime). This system can also detect oncoming vehicles at intersections and pedestrians crossing the street when the vehicle is turning.
Additionally, there’s an emergency steering and crash-avoidance function, which assists with steering and lane-keeping, that’s triggered when the driver performs a steering manoeuvre to avoid a collision.
These are the only safety features confirmed by Toyota to date, but more are certain to be announced closer to local release.

Toyota have confirmed the 300 Series will come to Australia in Q4 of this year, have been no more specific than that.

Likewise, there has been no mention of pricing, but an increase is guaranteed, given the greater standard spec levels and new drivetrain. Currently, LandCruiser 200 Series pricing starts at $80,996 for the GX and rises to $131,896 for the limited-edition Sahara Horizon.

Further information on the all-new LandCruiser 300 Series will be announced closer to its local release.