Building on the inherently tough and practical design of the 70 Series, the LC79 double cab is now the fourth body style in that range, joining the single cab-chassis, troop carrier and wagon
Toyota have announced that the rugged 70 Series Landcruiser will now be available as a dual cab, with Australia being the first market in the world to get the new 'LC79' double cab.

Building on the inherently tough and practical design of the 70 Series, the LC79 double cab is now the fourth body style in that range, joining the single cab-chassis, troop carrier and wagon. The model was produced in response to demand from Australia's mining sector, and will go on sale in late September, starting from $63,990.

The LC79 also benefits from production upgrades across the 70 Series range, including anti-skid brakes on all grades, air-inlet snorkel mounted on the A pillar, improved seats, in-dash multi-function clock and audio/CD system with Bluetooth™# hands-free, audio streaming and voice-recognition phone/audio.

All nine LandCruiser 70 Series models share the 32-valve V8 turbo-diesel engine with common-rail direct injection and an intercooler. The Euro IV-compliant V8 engine delivers 151kW of power at 3400rpm and replaces six-cylinder diesel and turbo-diesel engines. Peak torque of 430Nm is reached at just 1200rpm and held all the way to 3200rpm - the flattest torque curve among all of Toyota's engines.

Toyota Australia's executive director sales and marketing Matthew Callachor said mining companies and other regional and rural communities had been keenly waiting for the arrival of the new double cab.

"The 70-Series is so popular for the really tough jobs that customers have been modifying the wagon version to provide the flexibility of a double-cab ute," Mr Callachor said. "The double cab will carry five adults as well as providing a one-tonne payload for their heavy gear, such as surveying equipment."

* Recommended retail prices exclude dealer delivery, government and statutory charges and optional extras.
# The Bluetooth™ word mark is owned by The Bluetooth SIG, Inc. Not all devices will be compatible and functionality will vary depending on the device. 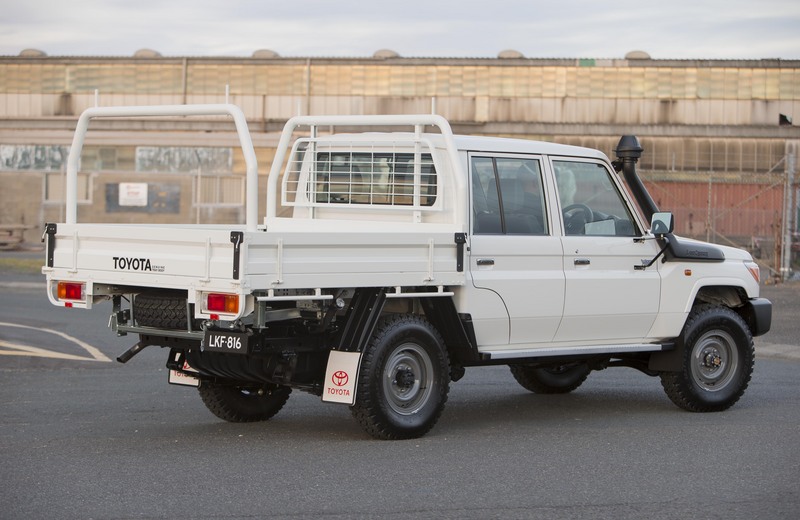