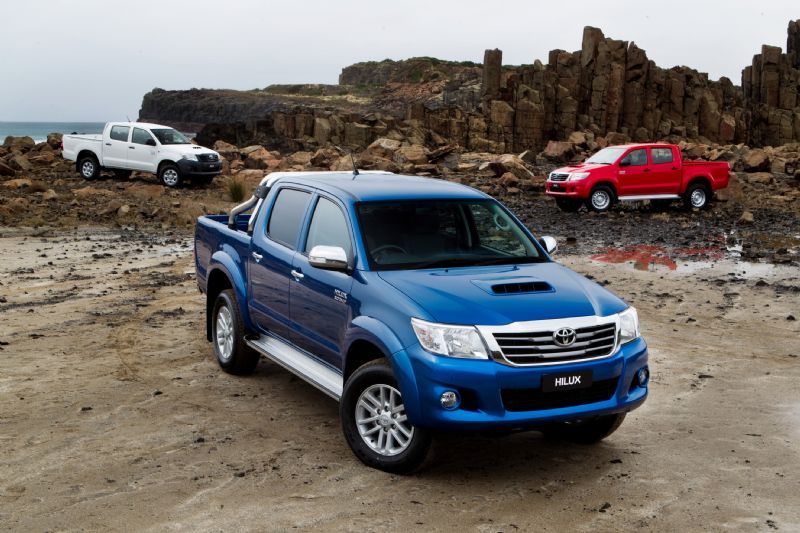 New styling and added features across the range plus reduced prices on many of the 35 HiLux variants have put Australia's top-selling workhorse in an even stronger position
Toyota has upped the value and refreshed the styling of its latest HiLux range, signifying a value-boost as high as 15.8 per cent.

New styling and added features across the range plus reduced prices on many of the 35 HiLux variants have put Australia's top-selling workhorse in an even stronger position.

"We have continually updated HiLux so that it offers the size, body styles, power, equipment and value demanded of a vehicle that doubles as a workhorse and a family car," Mr Buttner said.

Across the range, anti-skid brakes are now standard and cruise control is standard on all SR and SR5 variants, as well as automatic 4x4 WorkMate 4x4s. All models now have a tachometer.

In the 4x4 range, vehicle stability control is now standard on all SR5 double cabs and optional on all SR Double Cab pick-ups.

Side seat and curtain-shield airbags and sports-style front seats have been fitted to all 4x4 SR5 and SR variants.

A limited-slip differential has been included in all 4x4 WorkMates.

HiLux interiors have been updated with refined designs that reinforce its credentials as a leisure vehicle, including new seat fabrics on selected variants.

It offers improved sensory quality throughout the cabin and passenger-car levels of convenience.

A new upper dashboard design features a horizontal centre instrument cluster that reinforces the breadth and roominess of the cabin.

The centre stack features new controls for the heating and ventilation system and, for SR5 variants, automatic climate control has been added to the air-conditioning.

A major improvement is the addition of advanced new audio systems on all variants. Depending on the grade, they feature voice recognition, touch screen, radio text, 3D graphics for the satellite navigation and safety warnings for school zones and speed and red-light cameras.

As part of these audio upgrades, all SR5 models will come with satellite navigation as standard, viewed on the 6.1-inch LCD touch screen.

Toyota's HiLux range now starts with the 4x2 WorkMate Single Cab cab-chassis at $18,990 - an increase of just $500 offset by the addition of anti-skid brakes, a tacho, new sheet metal, redesigned interior and a new audio system.

Across the range, the biggest improvement in value comes with the 4x4 SR5 turbo-diesel Xtra Cab.

The added spec - including satellite navigation, dusk-sensing headlamps, steering wheel-mounted telephone controls, re-designed alloy wheels, sports-style front seats with side airbags, curtain-shield airbags and auto control for the air-conditioning - comes to $2,690. In addition, the price has been rolled back by $5,650.

The entry price for a 4x4 turbo-diesel HiLux has come down $6,150 or 16.1 per cent to $31,990 with the introduction of a WorkMate Single Cab with manual transmission.