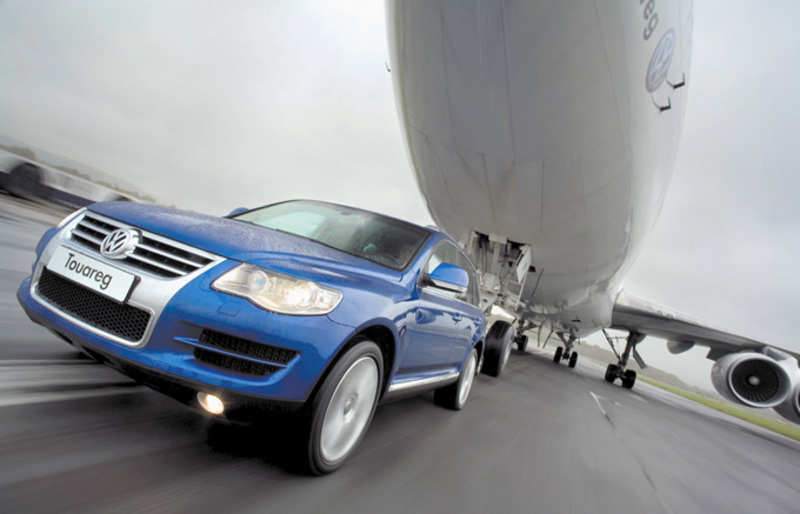 The question was posed about how powerful a modern four-wheel drive is. And so the idea was borne to put it to the test.
The Touareg is innately the ideal towing vehicle: Maximum load capacities are 3,500kgs for trailers and 1,640 kgs for the rear axle. But when instead of a 3.5 ton boat trailer a jet weighing over 155 tons - consisting of 511 m2 of wing surface, 4 engines, 450 seats and a fuselage the size of a block of houses - is attached to the hitch, things look quite a bit different. Careful preparations must be made.

In order for the Touareg V10 TDI to be able to tow the big bird, the weight of the Volkswagen had to first be increased. This sounds paradoxical but is absolutely necessary so that the power of the engine can be converted into propelling force. For this purpose steel balls and steel plates were distributed in the SUV. Extra weight: 4,345 kgs! Total weight of the Touareg: 7,030 kgs. Weight distribution: 2,755 kgs in front, 4,275 kgs in back. The other modifications were kept to a minimum. For the front axle drive the shorter transmission of the Touareg V8 was integrated in place of the V10 TDI transmission. The crew increased air pressure in the standard Michelin tyres to 4.5 bar.

And finally, the maximum speed was limited - not out of fear that the unusual harnessed system would become airborne, but to protect the tyres. Everything else, from the engine to the shock suspension system and four-wheel drive corresponded exactly to the series production version. An extra device was then used to hook up the Boeing 747 to the Touareg's standard trailer hitch. The experiment could begin. Based on the maximum torque of the V10 TDI (750 Nm) and the transmission ratio, the engineers had previously calculated that the Touareg would be able to put approx. 200 tons into motion. With low 2nd gear selected, the jet initially refused to budge, but then it began to roll with the Touareg V10 TDI experiencing no traction problems.