The EQC is the first Mercedes-Benz vehicle to be launched under the EQ brand. With its seamless, clear design and colour highlights typical of the brand, it is a pioneer for an avant-garde electric look while representing the design idiom of Progressive Luxury.

It was at the 2016 Paris Motor Show that Mercedes‑Benz first presented its new product and technology brand for electromobility.

In mid-2019 the time has now come: The EQC is the first Mercedes-Benz vehicle to be launched under the EQ brand.

With its seamless, clear design and colour highlights typical of the brand, it is a pioneer for an avant-garde electric look while representing the design idiom of Progressive Luxury. 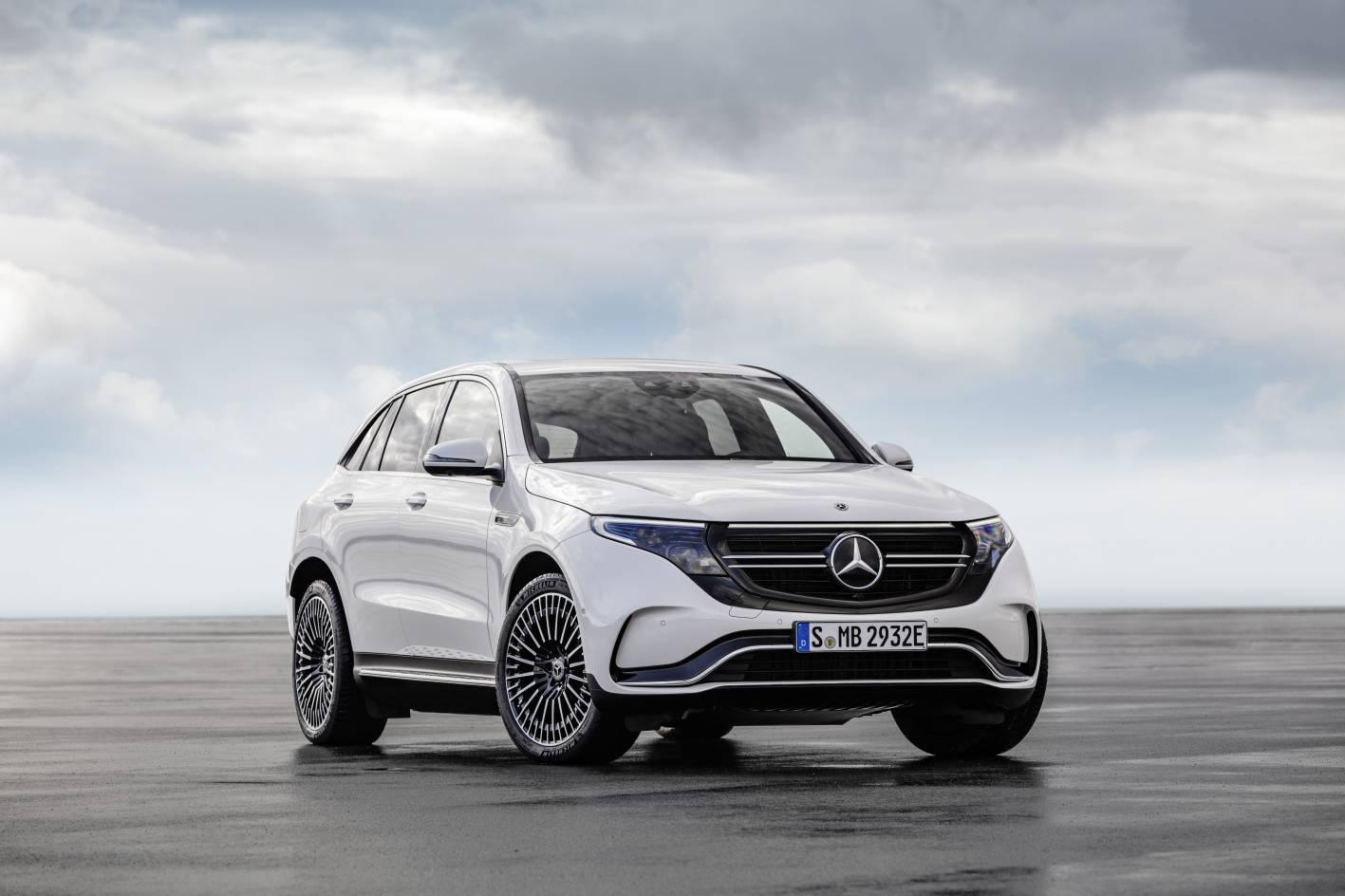 With respect to quality, safety and comfort the EQC is the Mercedes-Benz among electric vehicles, and highly convincing in the sum of its attributes.

These are accompanied by dynamic performance, thanks to two electric motors at the front and rear axles with a combined output of 300 kW.

A sophisticated operating strategy enables an electric range of more than 450 km according to NEDC.

The EQC also symbolises the start of a new mobility era at Daimler. 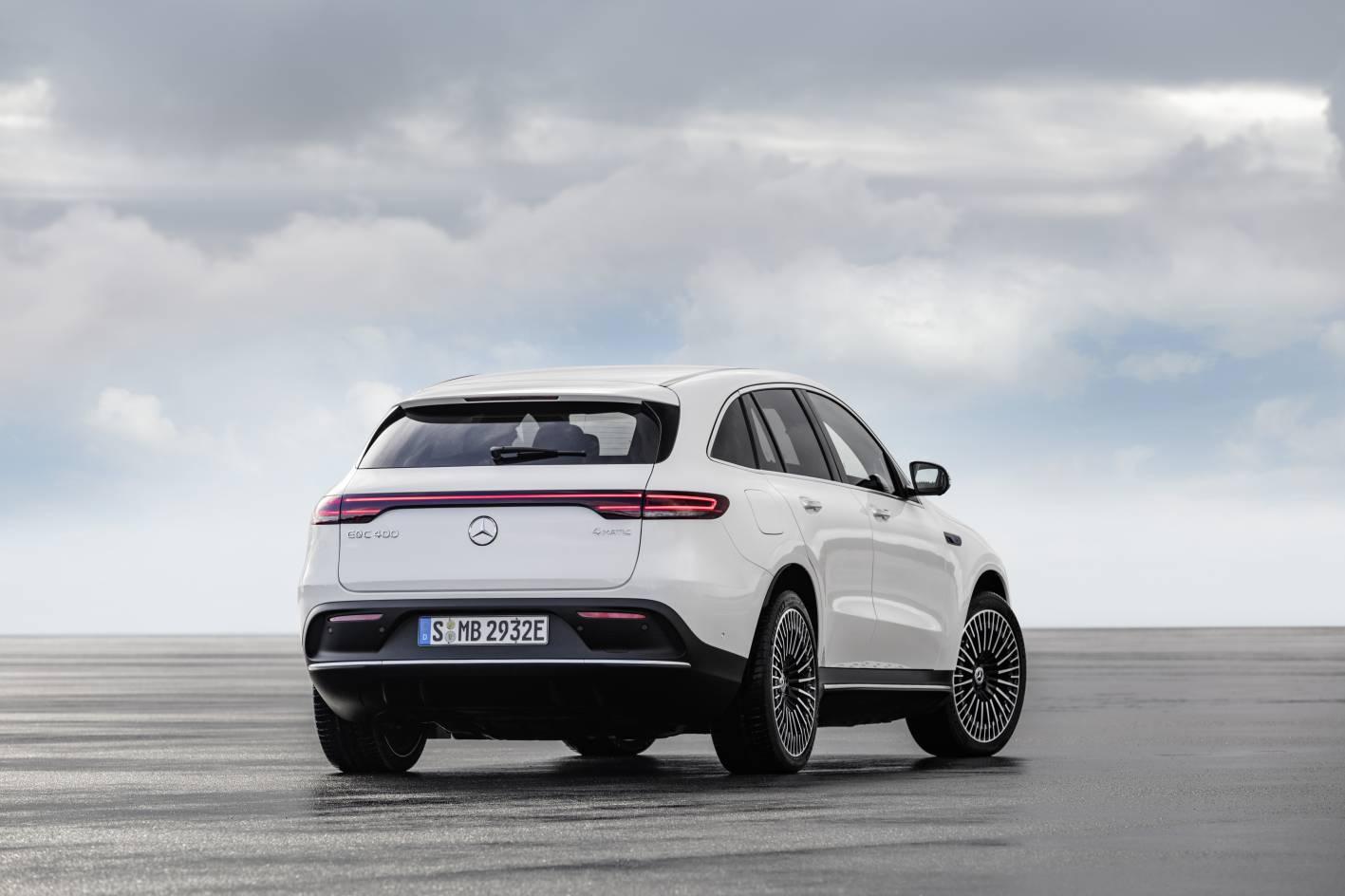 By virtue of its muscular proportions, the EQC is classed as a crossover SUV.

The extended roofline and window layout with a low waistline and the coupé-like roof recess at the rear visually position it between an SUV and an SUV coupé.

A striking feature at the front is the large black-panel surface enclosing the headlamps and grille.

For the first time, the black panel is bordered at the top by an optical fibre as a visual link between the torch-like daytime running lamps as a typical Mercedes-Benz feature.

At night this creates an almost uninterrupted, horizontal light band. The inner housings and tubes of the standard MULTIBEAM LED headlamps are in high-gloss black. 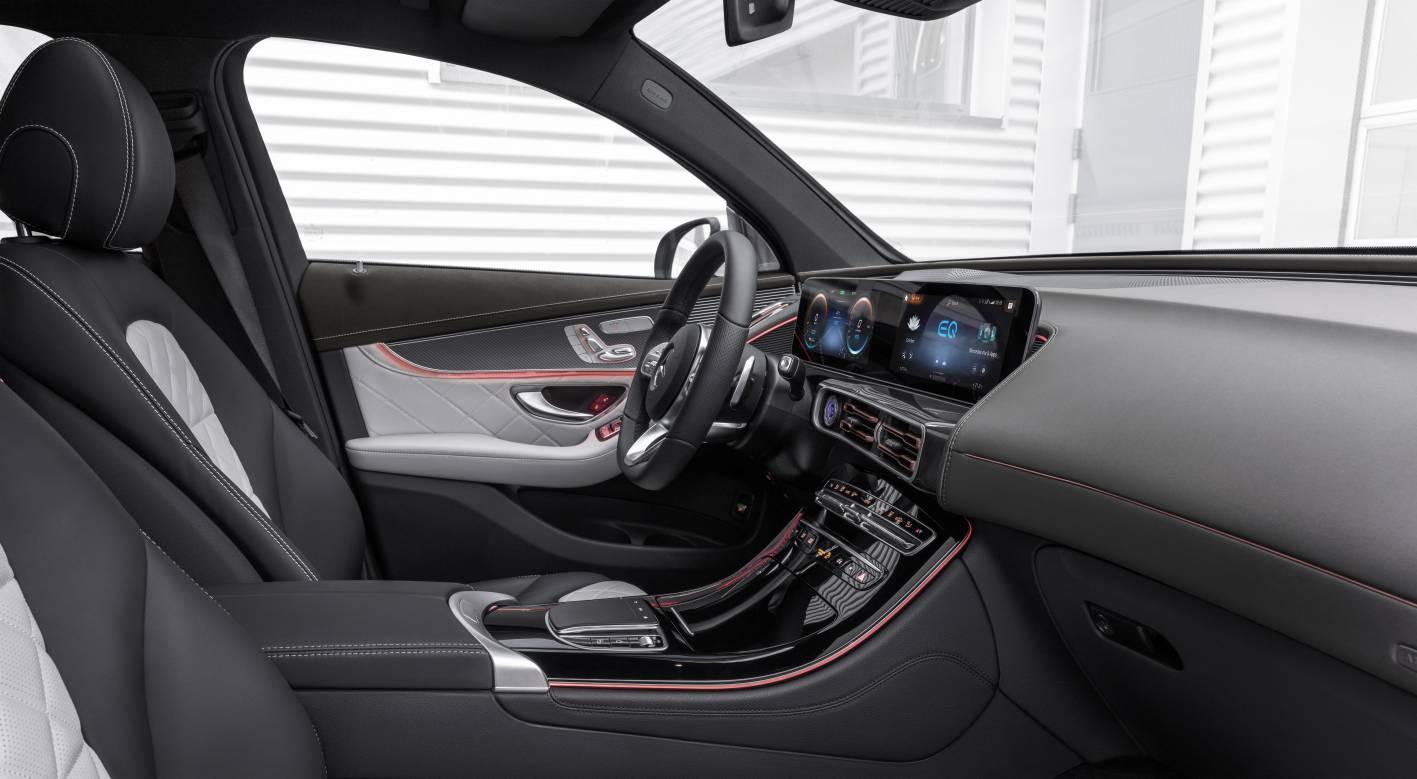 The high-quality interior of the EQC also pioneers an avant-garde electro-look. One example is the ribbed edge of the instrument panel, which resembles the cooling ribs of a hi-fi amplifier.

The instrument panel is designed as a driver-oriented cockpit. The typical Mercedes-Benz wing profile is asymmetrical, with a “cut-out” in the driver area.

This is where one of the visual highlights of the cockpit is located - a high-tech, high gloss cassette housing flat air vents with key-shaped, rosé-gold coloured louvres. 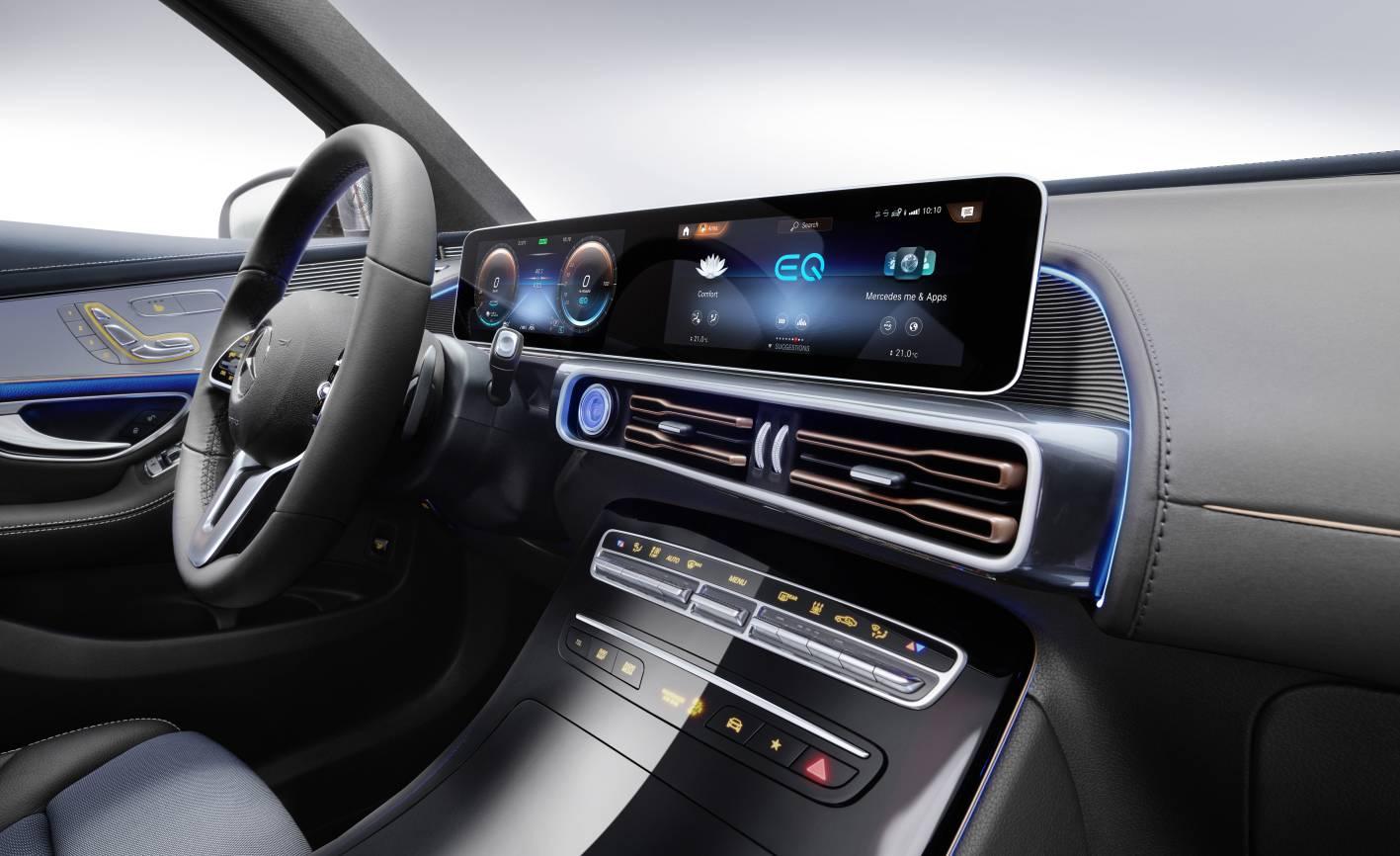 Powertrain: Dynamic performance meets efficiency
As the first Mercedes-Benz model to be launched under the new product and technology brand EQ, the EQC features an all-new drive system development with compact electric drivetrains at each axle.

These give the EQC the driving characteristics of an all-wheel drive.

To reduce power consumption and increase dynamism, the electric drivetrains are configured differently: the front electric motor is optimised for best possible efficiency in the low to medium load range, while the rear one determines dynamism.

Together, they generate an output of 300 kW and a maximum torque of 765 Nm. 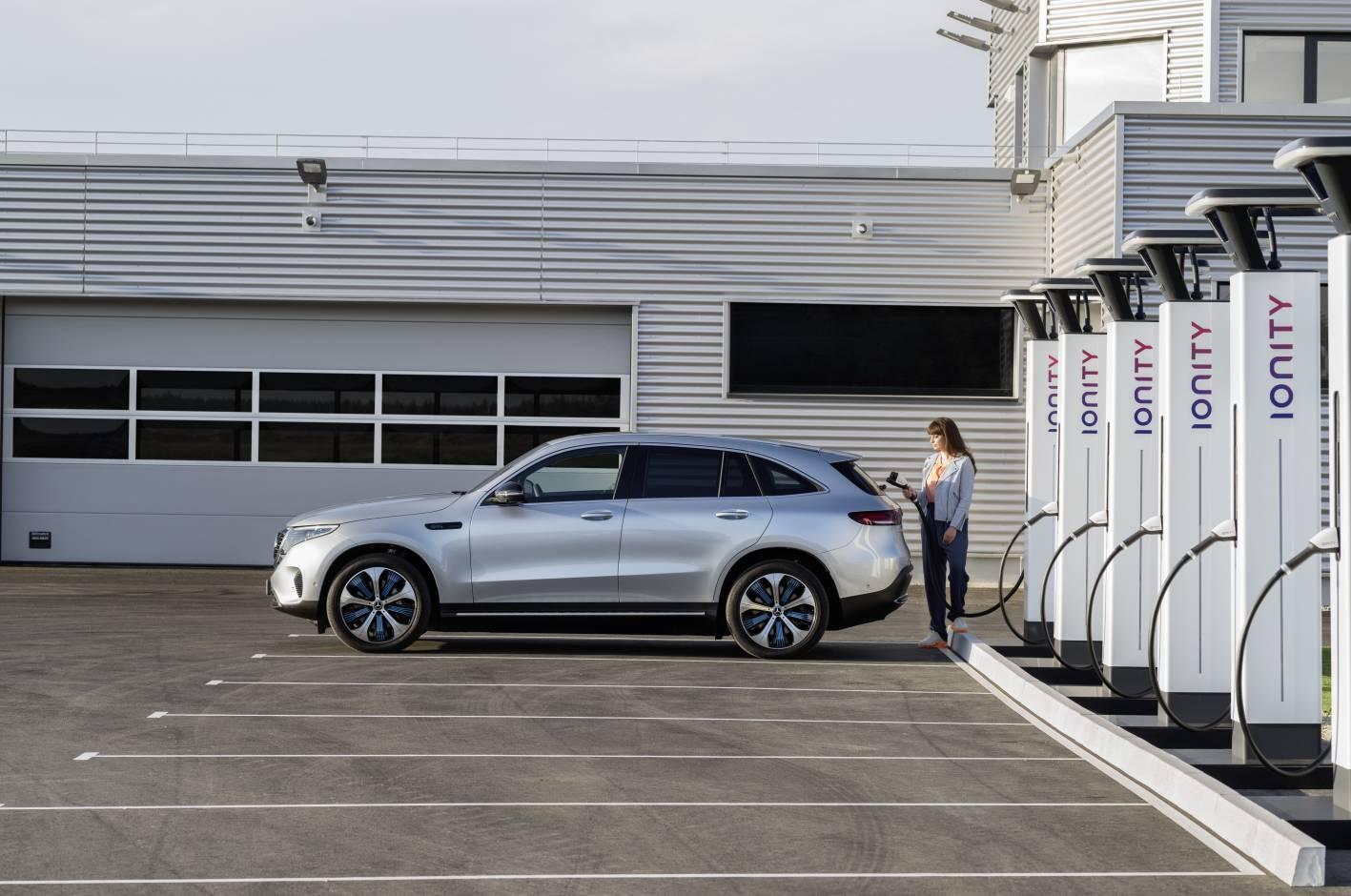 Mercedes-Benz engineers have enhanced noise comfort with a number of measures.

This effective isolation is supplemented with insulation measures. As a result, the interior of the EQC is extremely quiet.

The lithium-ion battery, which has an energy content of 80 kWh (NEDC) supplies the vehicle with power.

The power consumption and range of electric vehicles depend very much on the driving style. 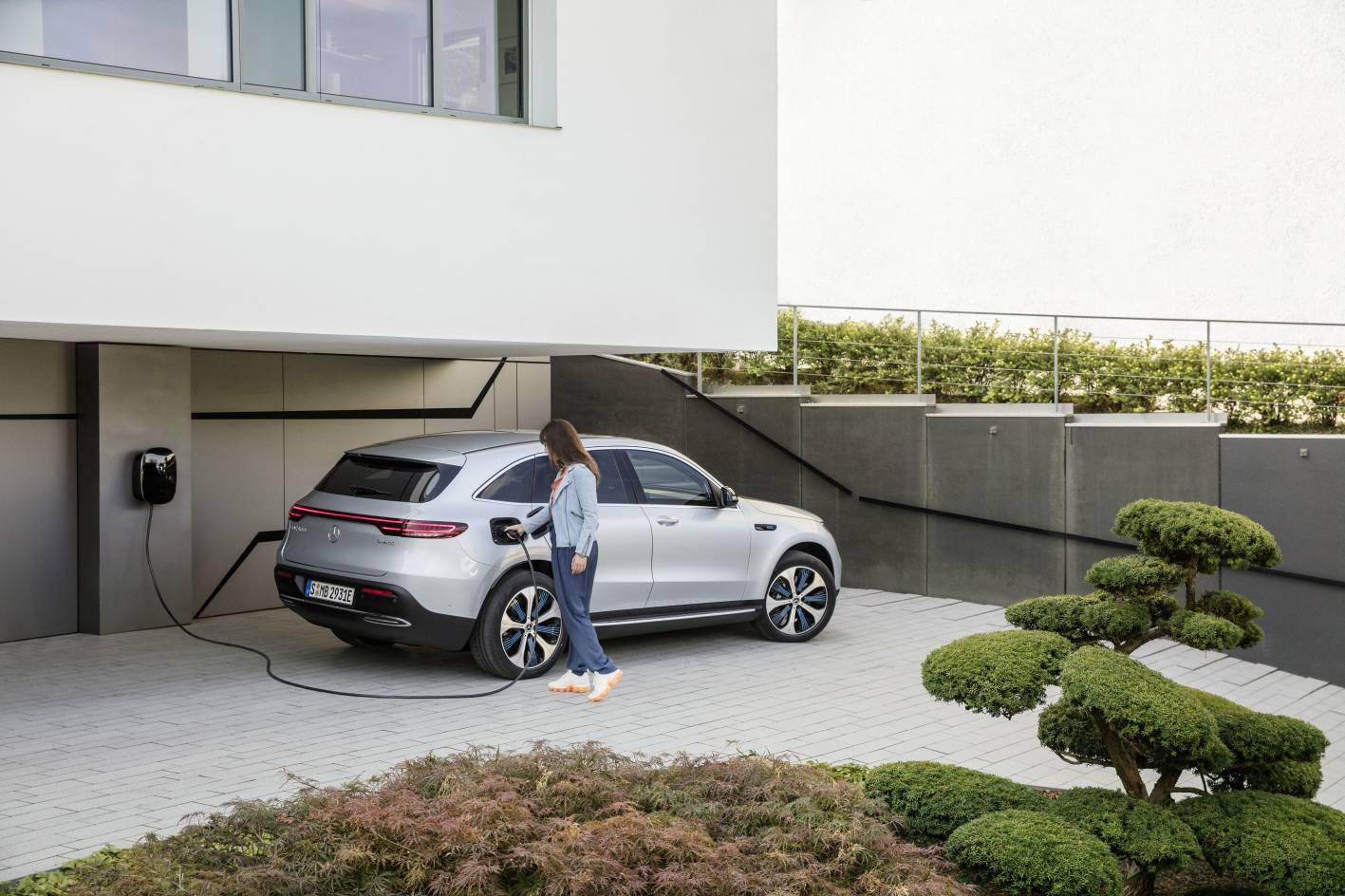 The EQC supports its driver with five driving programs, each with different characteristics: COMFORT, ECO, MAX RANGE, SPORT and an individually adaptable program.

In the more economical driving modes, the haptic accelerator pedal that prompts the driver to conserve power plays an important role.

The driver is also able to influence the recuperation level using so-called paddles behind the steering wheel. 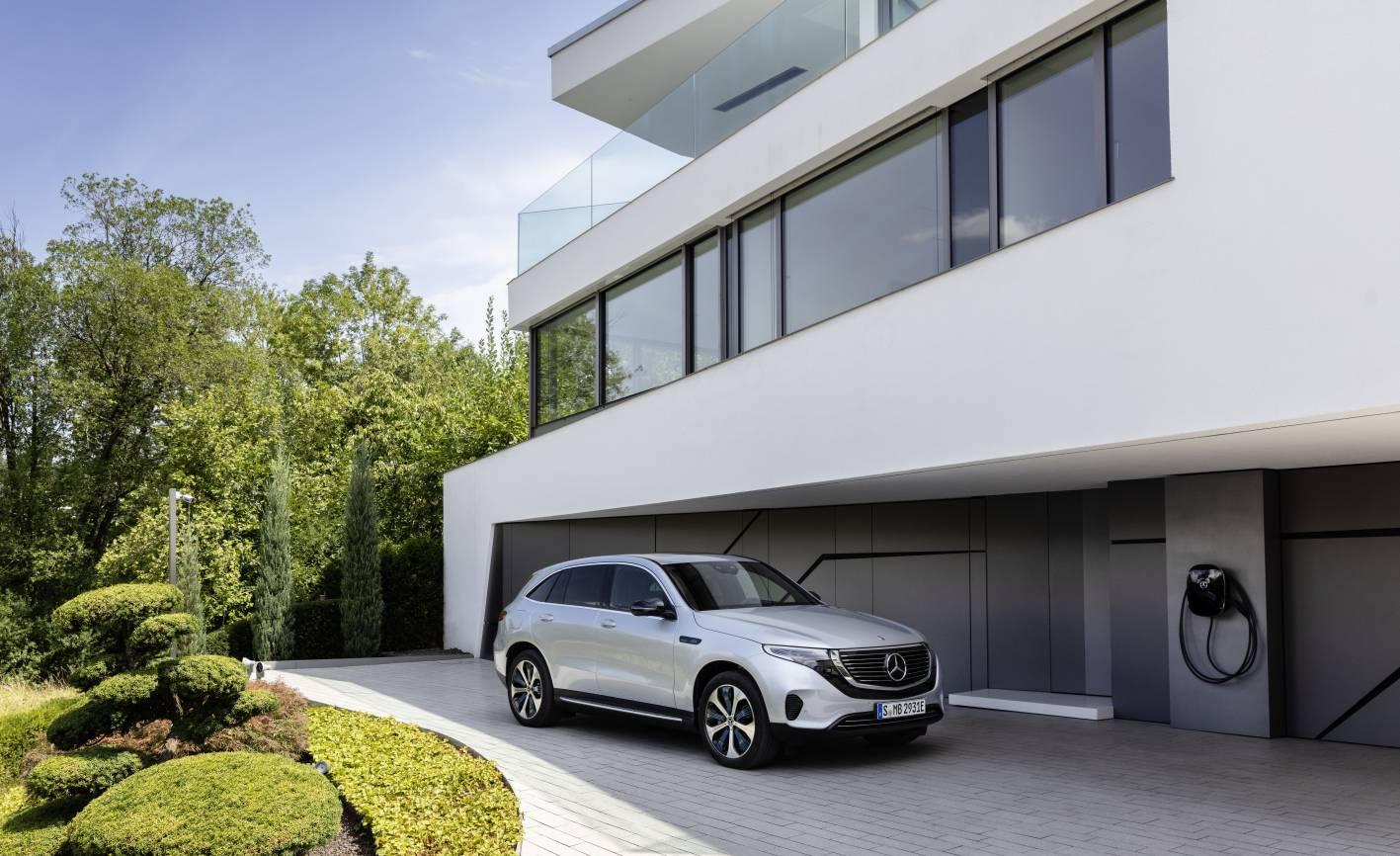 The ECO Assist system gives the driver comprehensive support when driving predictively: by prompting the driver when it is appropriate to come off the accelerator, e.g. because the vehicle is approaching a speed limit, and by functions such as coasting and specific control of recuperation.

For this purpose, navigation data, traffic sign recognition and information from the intelligent safety assistants (radar and stereo camera) are linked and processed. 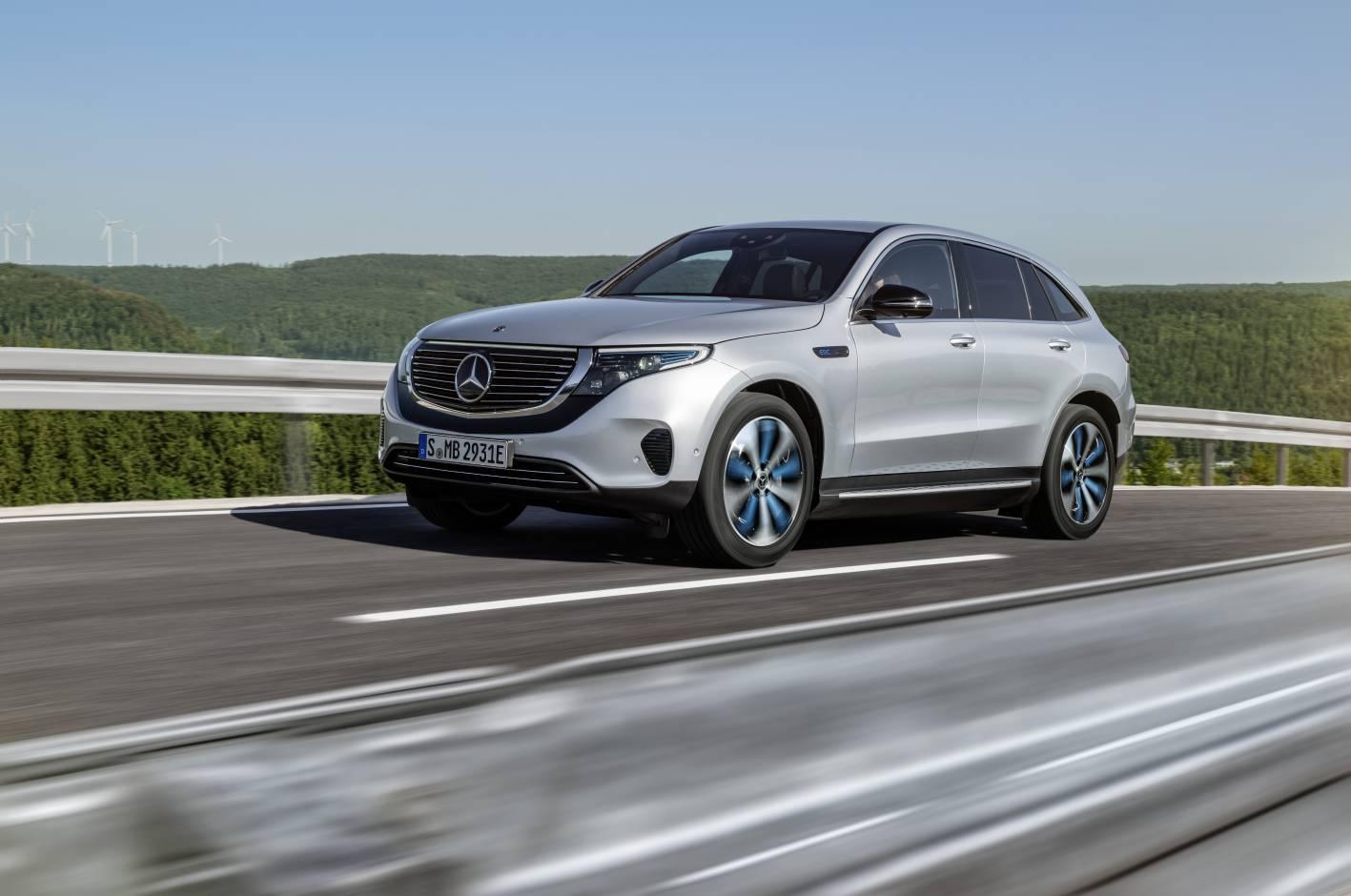 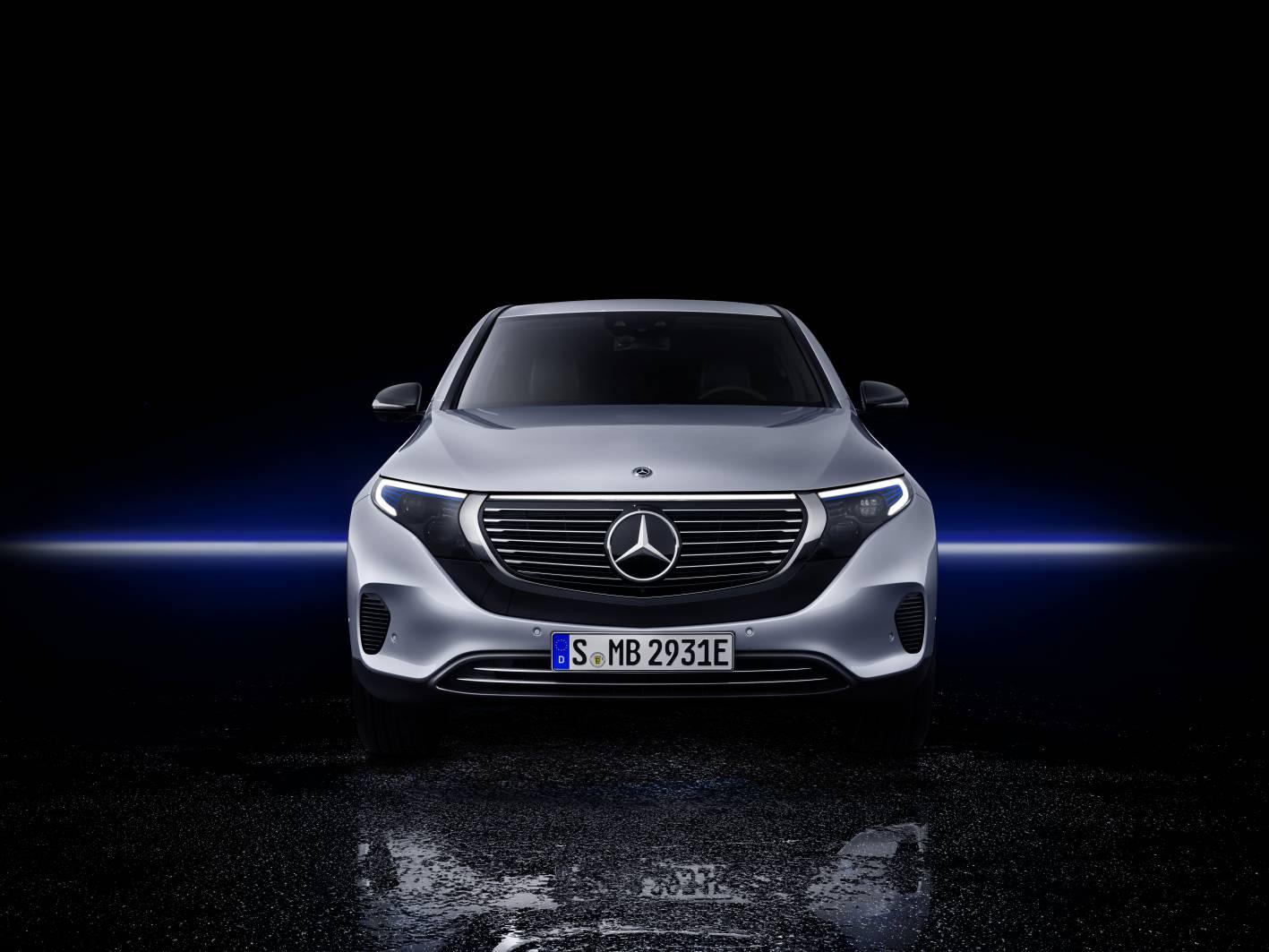 Charging: Flexible and fast
As standard the EQC is equipped with a water-cooled onboard charger (OBC) with a capacity of 7.4 kW, making it suitable for AC charging at home or at public charging stations.

Charging at a Mercedes-Benz Wallbox is up to three times faster than at a domestic power socket.

It is faster still with DC charging – which is standard for the EQC – for example via CCS (Combined Charging Systems) in Europe and the USA, CHAdeMO in Japan or GB/T in China.

Depending on the SoC (status of charge), the EQC can be charged with a maximum output of up to 110 kW at an appropriate charging station. 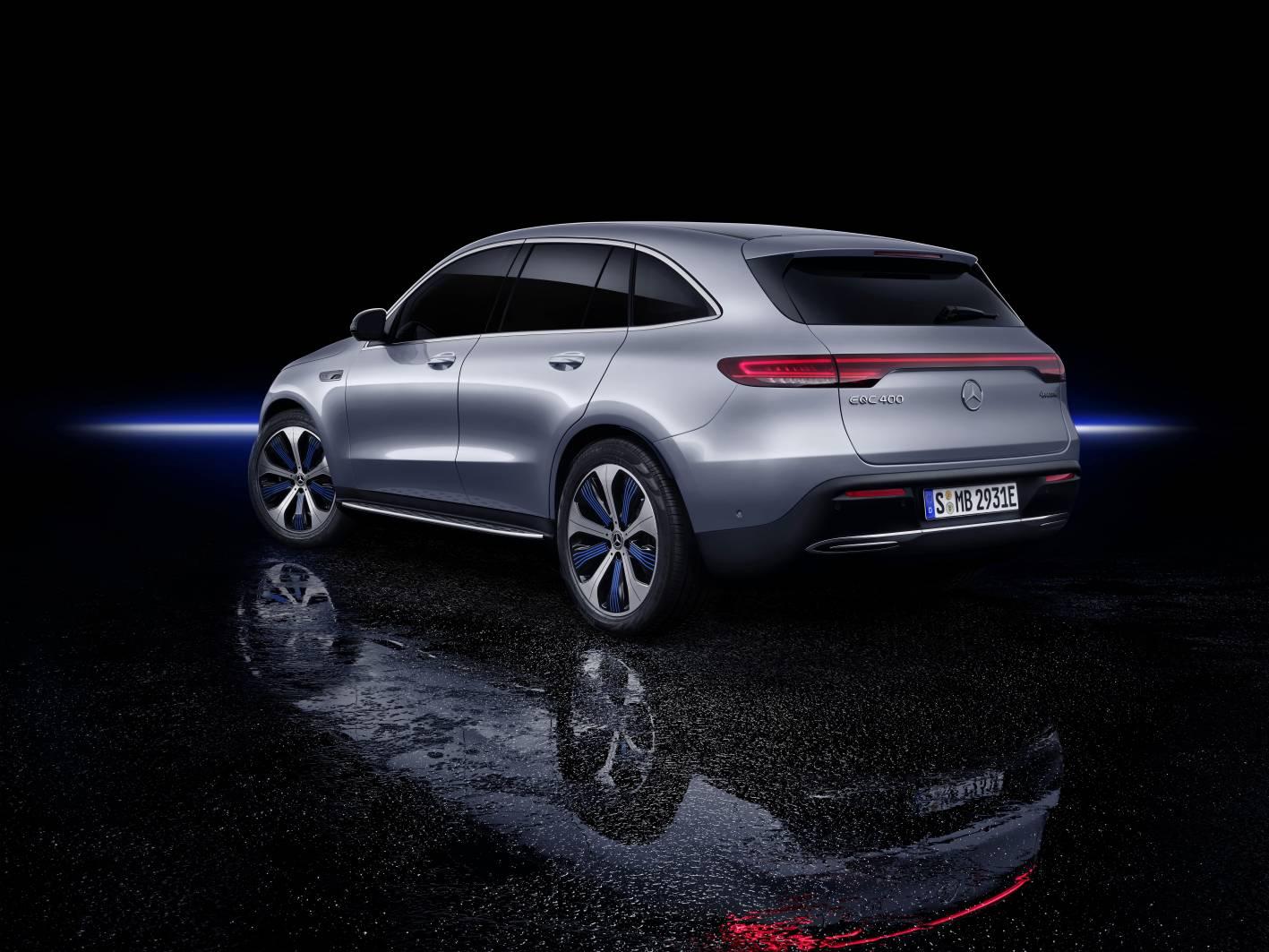 The MBUX display has a special EQ tile where numerous EQ features are grouped.

Alternatively the user can access the EQ menu of the MBUX system directly using a key in the lower left control panel.

Thanks to natural language recognition, the EQ specific voice control helps the driver to operate the EQC. 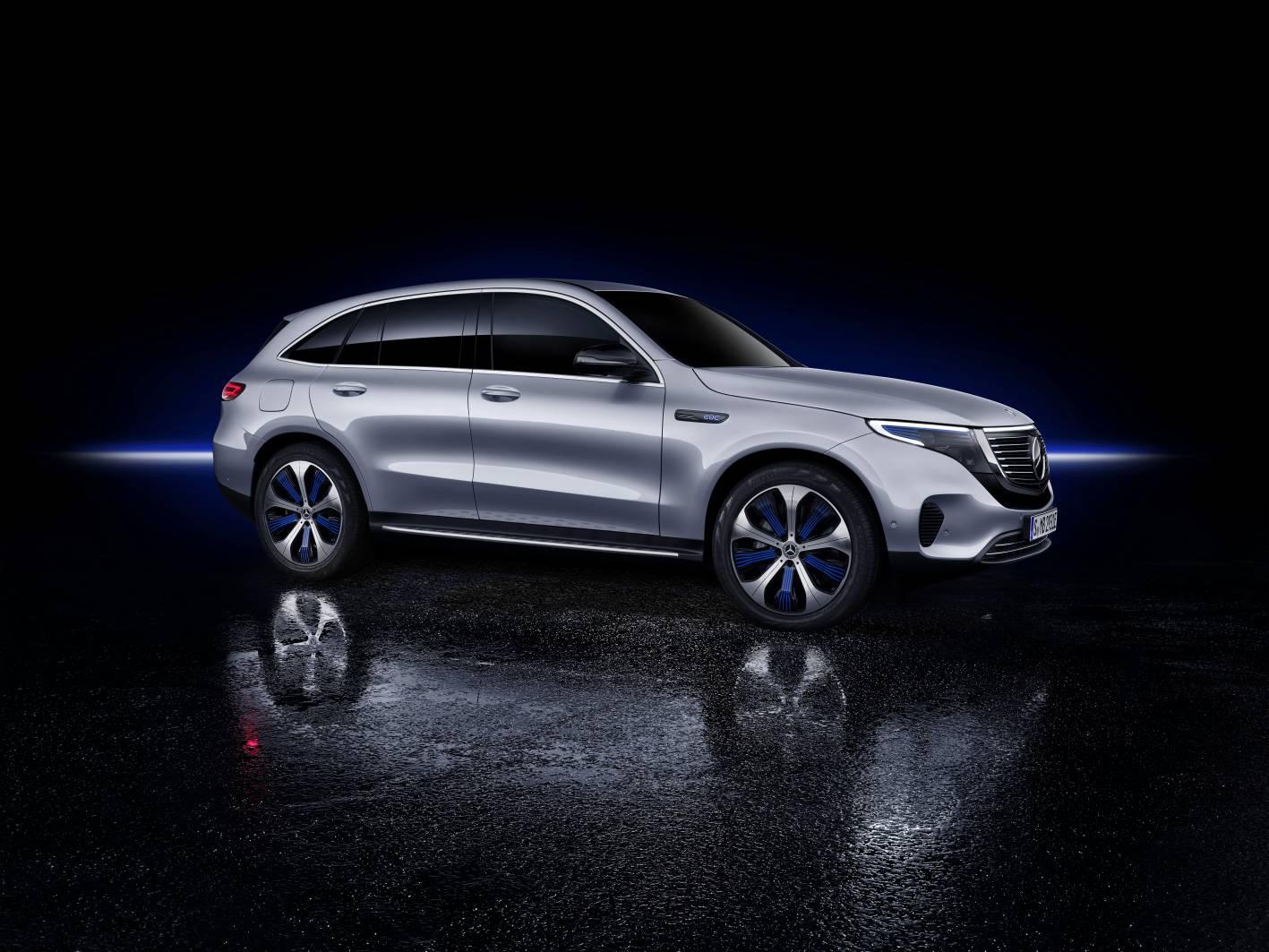 Intelligent services: Relaxed travel from start to finish
EQ with Mercedes me provides comprehensive services for the electromobility of today and tomorrow.

The most important new services and functions of the EQC planned for market launch include:

Pre-entry climate control: This ensures that the vehicle interior is already at the desired temperature on departure.

It can be programmed directly via MBUX or via the Mercedes me App. A sophisticated system with a heat pump and electric heater boosters pre-climatises the interior. 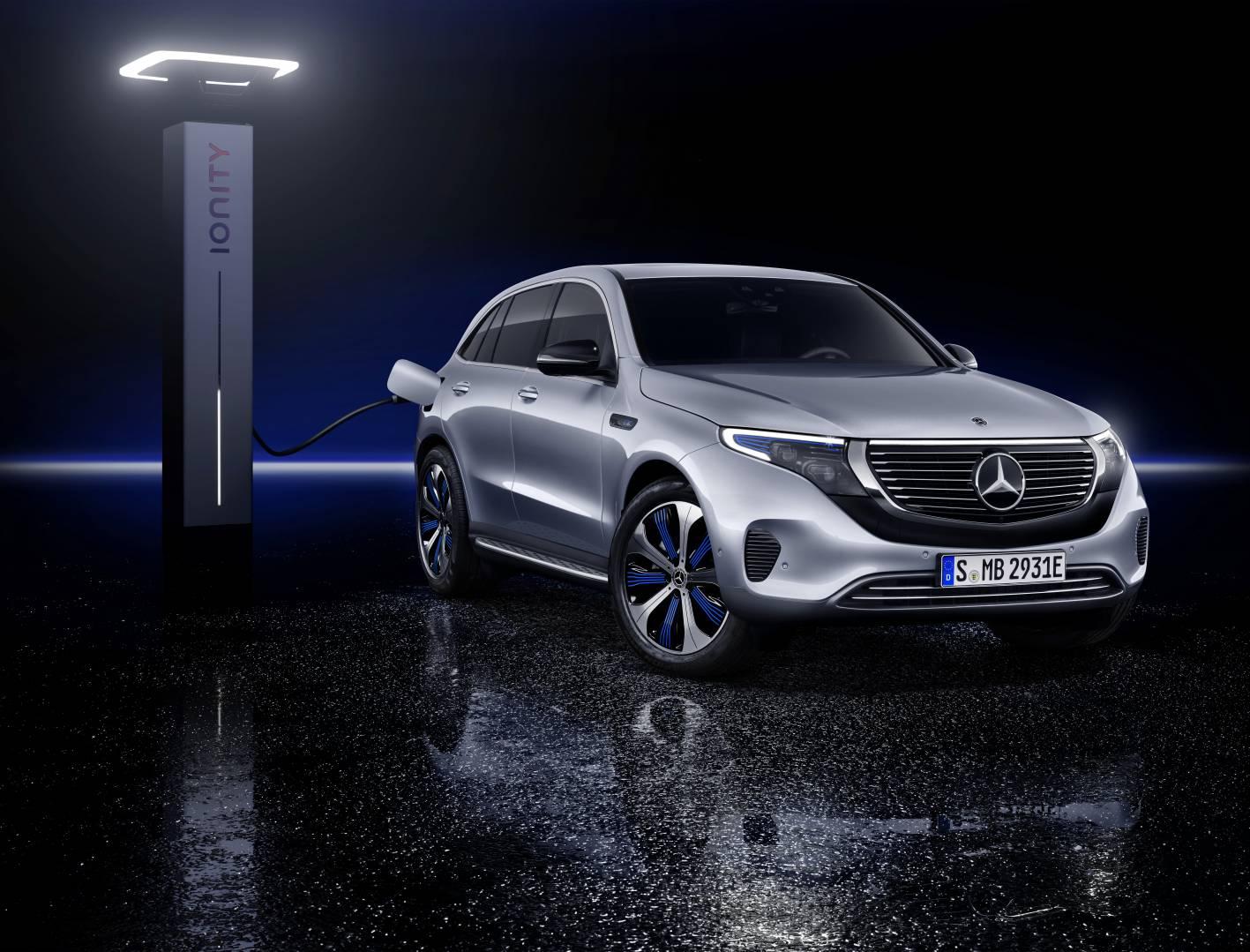 The EQ optimised navigation always bases its calculation on the fastest route taking into account the shortest charging time.

The route planning also responds dynamically to changes, and can take place both offboard and onboard, i.e. externally (via the Mercedes me App) and within the vehicle.

Thanks to EQ optimised navigation, Mercedes-Benz customers can easily find charging stations, and Mercedes me Charge gives them convenient access to the charging stations of numerous providers, also beyond national borders.

In this case customers benefit from an integrated payment function with simple accounting. 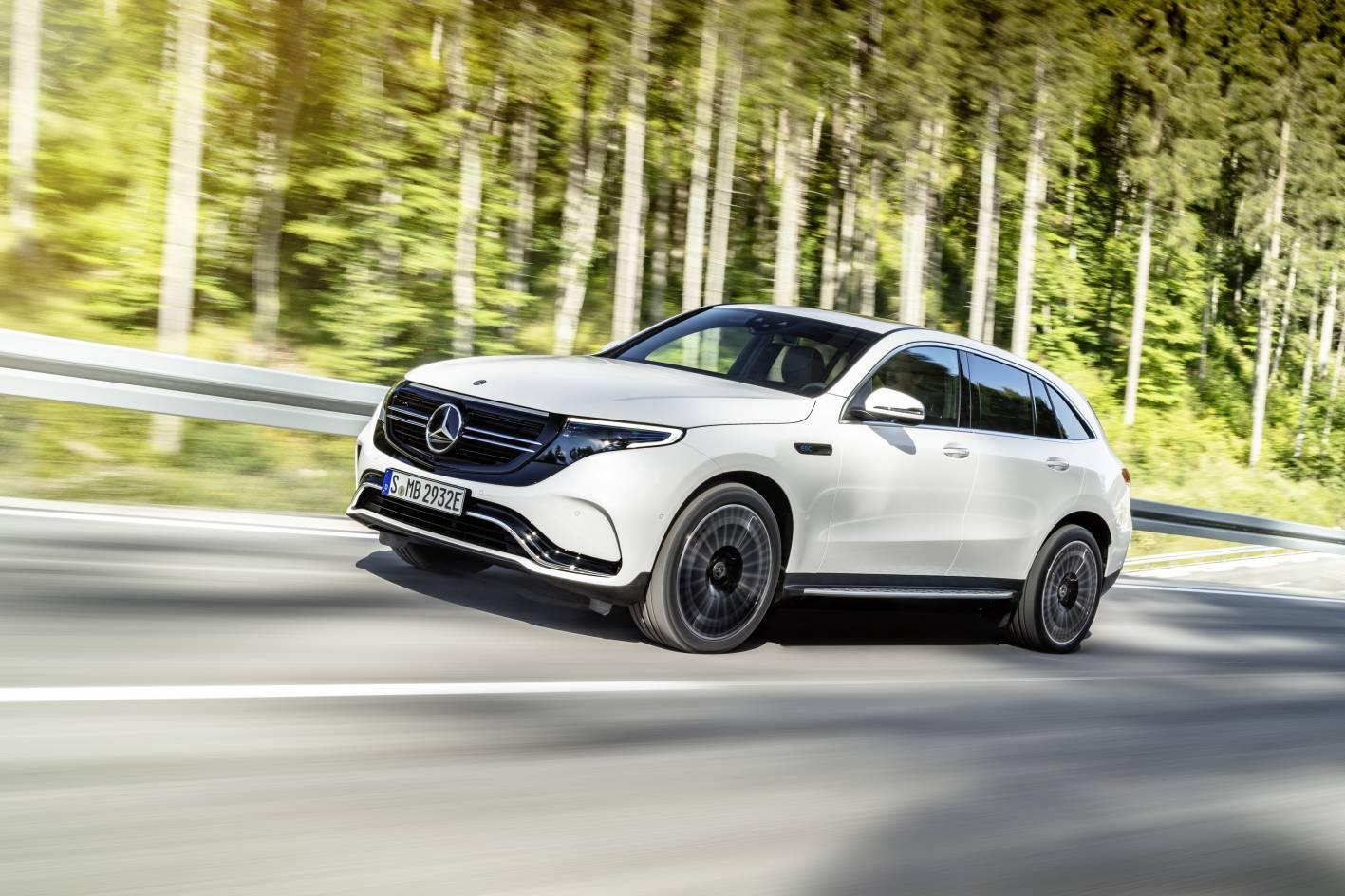 Active and passive safety: EQC-specific safety concept
The EQC is equipped with the latest generation of Mercedes-Benz driving assistance systems.

In the Driving Assistance package, these include new functions such as predictive speed adjustment when approaching the end of a tailback: when a tailback is detected, Active Distance Assist DISTRONIC reduces the speed to around 100 km/h as a precaution.

In a tailback on the motorway, the lane guidance system keeps the vehicle off-centre to leave space for the emergency services. 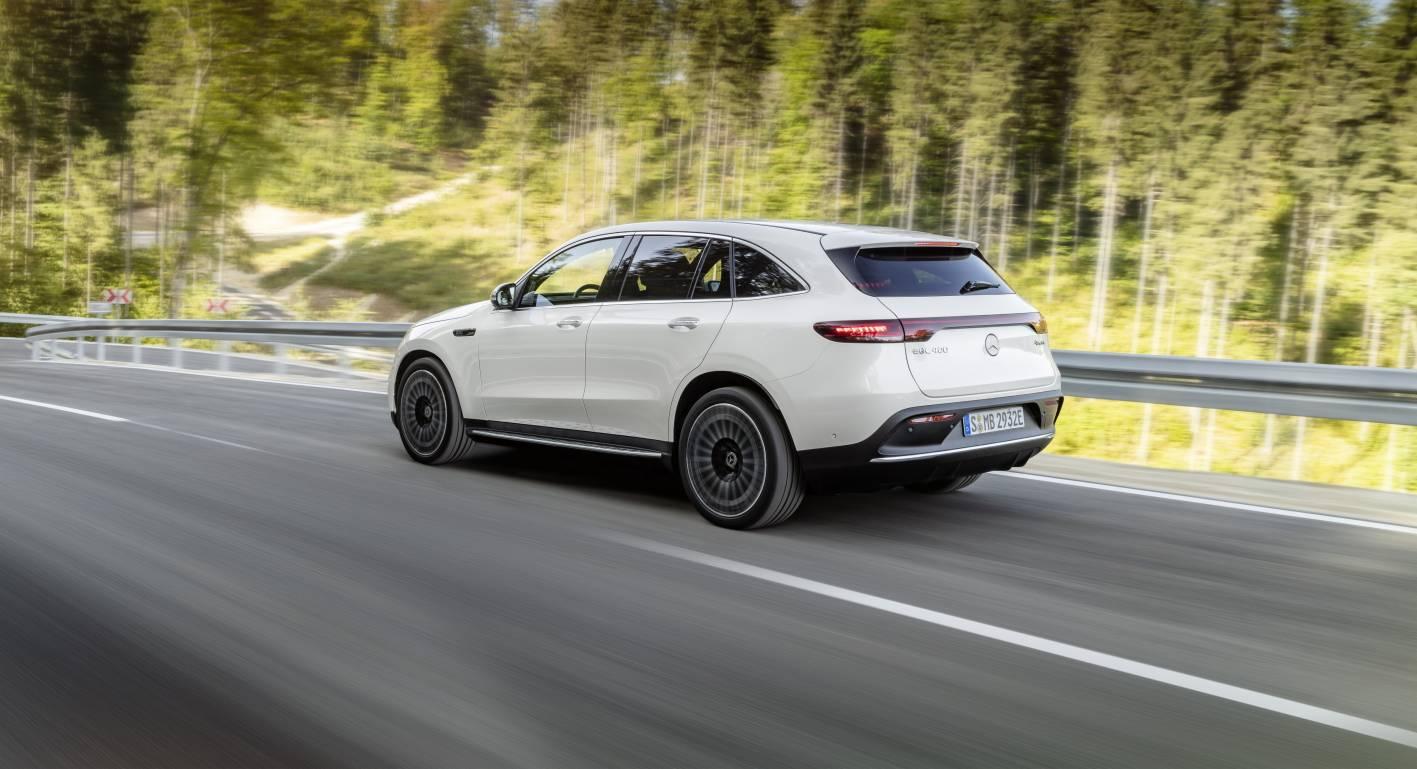 The EQC also meets the highest requirements with respect to passive safety: in addition to the usual, extensive programme of crash tests, Mercedes-Benz applies further, particularly stringent safety standards to the battery and all component parts carrying electrical current.

The vehicle structure of the EQC has been adapted to suit the special requirements of the electrical components and battery, and is configured to achieve the usual high safety level.

For example, a new subframe surrounds the drive components located in the front section, and this unit is supported by the usual mounting points. 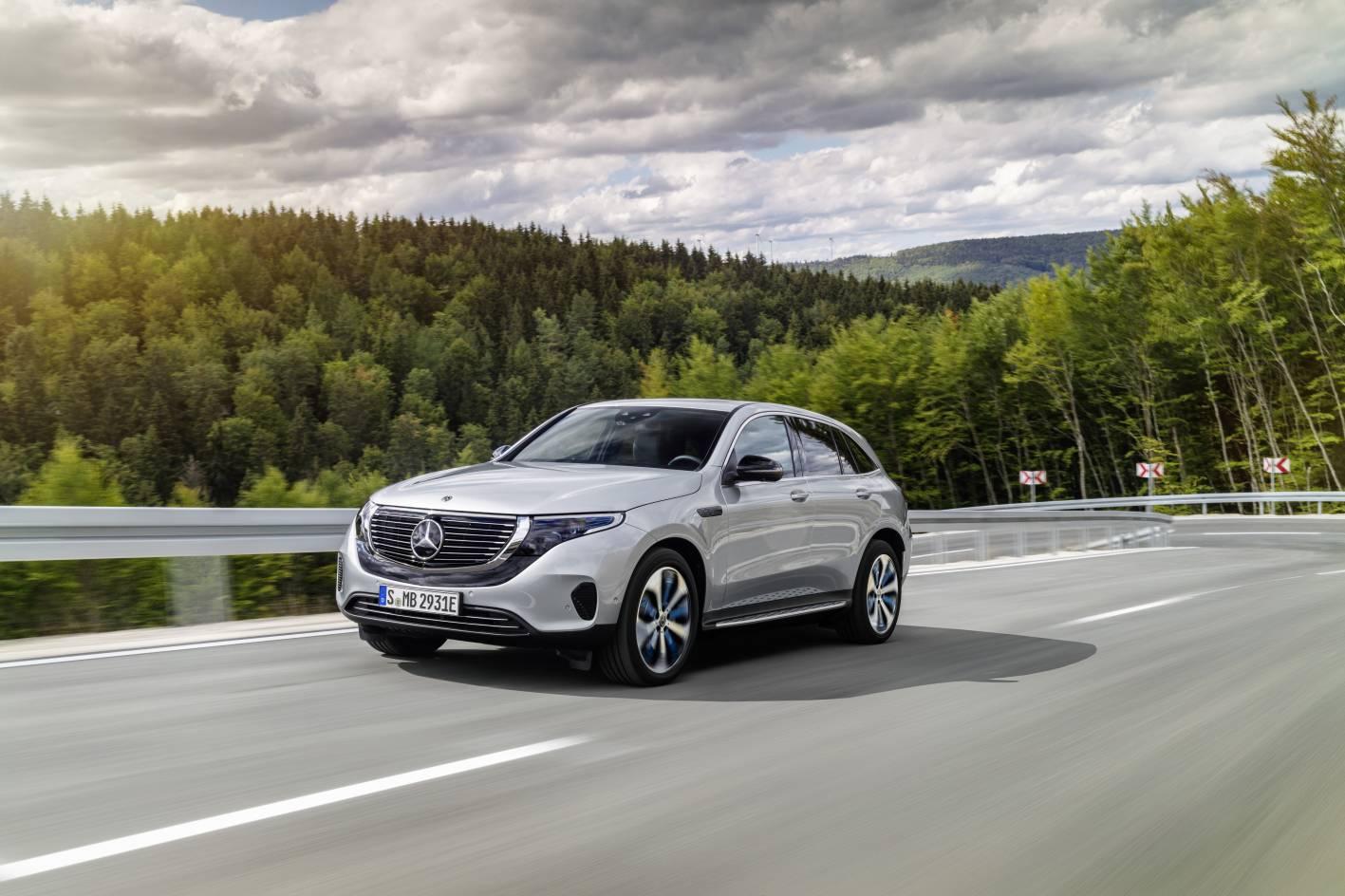 Mechanical protection of the battery: the high-safety design begins with the installation position of the high-voltage battery beneath the vehicle floor.

The energy storage unit is surrounded by a stable frame that can absorb energy.

Deformation elements are installed between the frame and the battery, and these are able to absorb additional forces in the event of a severe side impact.

A battery guard in the front area of the battery is able to prevent the energy storage unit from being pierced by foreign objects. 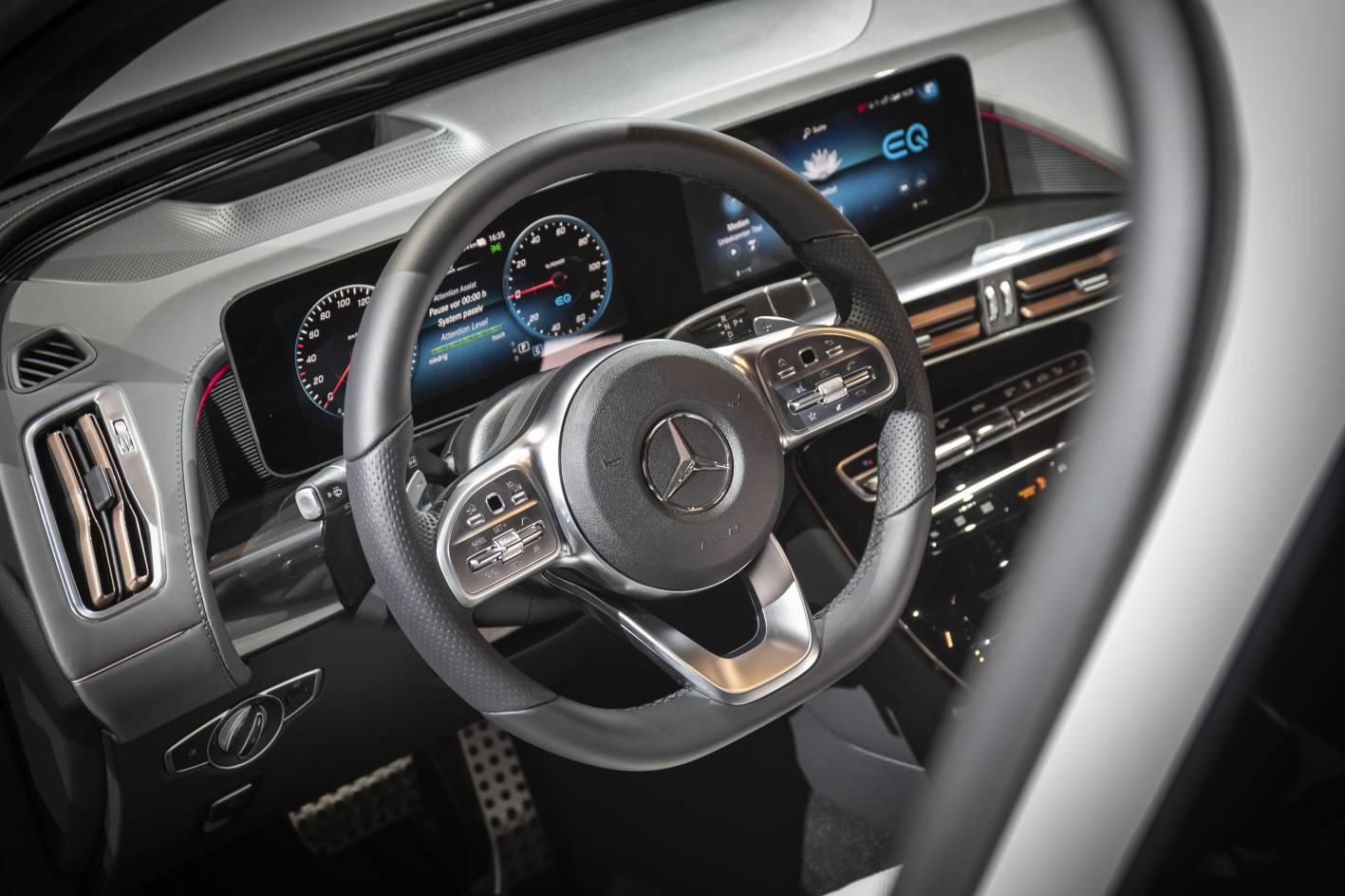 Electrical protection of the high-voltage system: the extensive experience of Mercedes-Benz with high-voltage drive systems has led to a multi-stage safety concept that deploys in the event of an accident.

The high-voltage system automatically shuts down, reversibly or irreversibly, according to the severity of the accident.

There are also shutdown points where emergency teams can deactivate the high-voltage system manually. 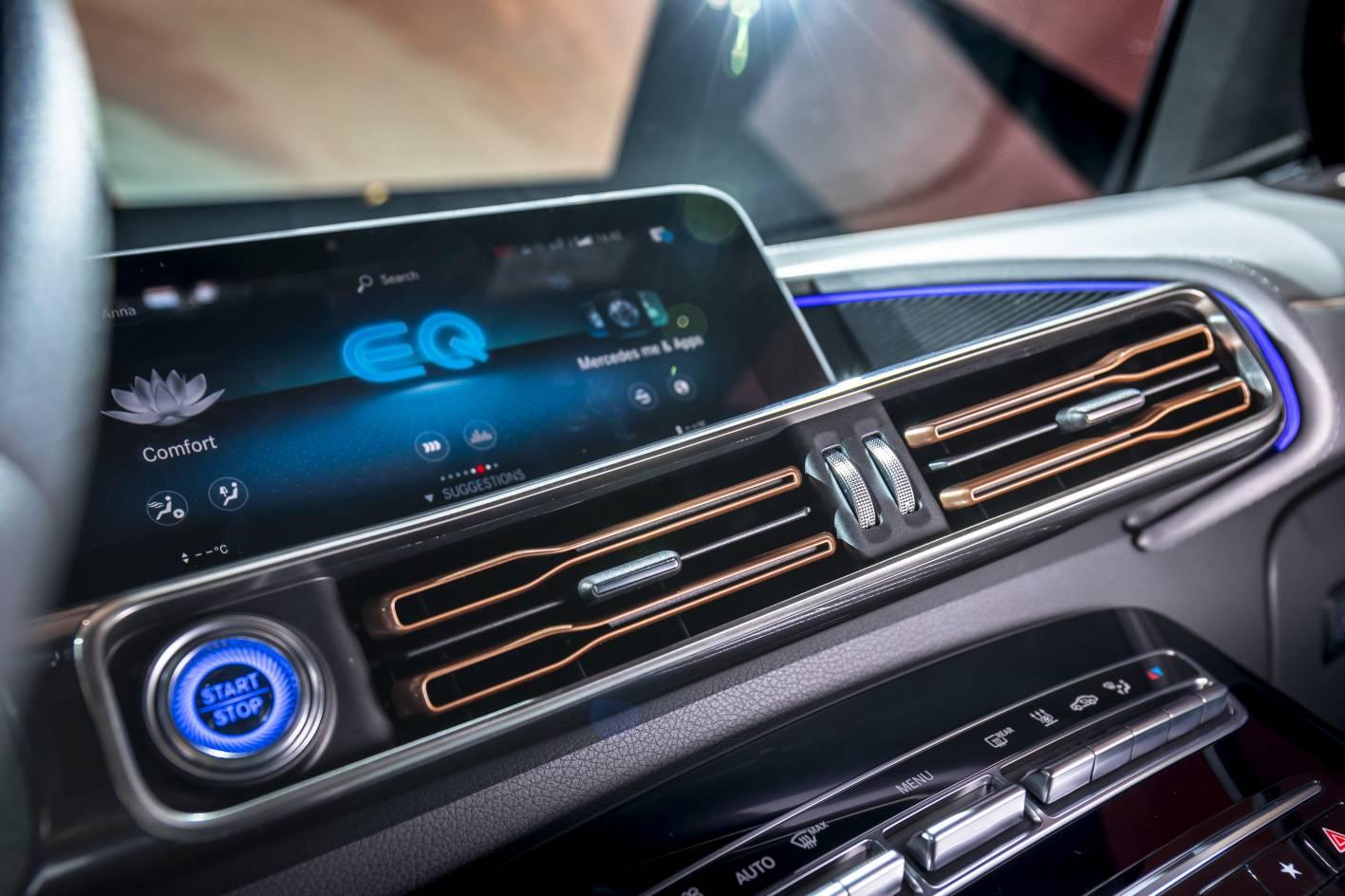 Testing: Endurance tests around the world
By market launch, 200 prototypes and pre-production vehicles of the EQC will have absolved tests covering several million kilometres across four continents (Europe, North America, Asia and Africa).

The test program comprises more than 500 individual tests. Like all Mercedes-Benz vehicles, the EQC must absolve the demanding standard test programme.

There are also special tests for the electric powertrain, the fuel cell, and the interplay of all powertrain components. 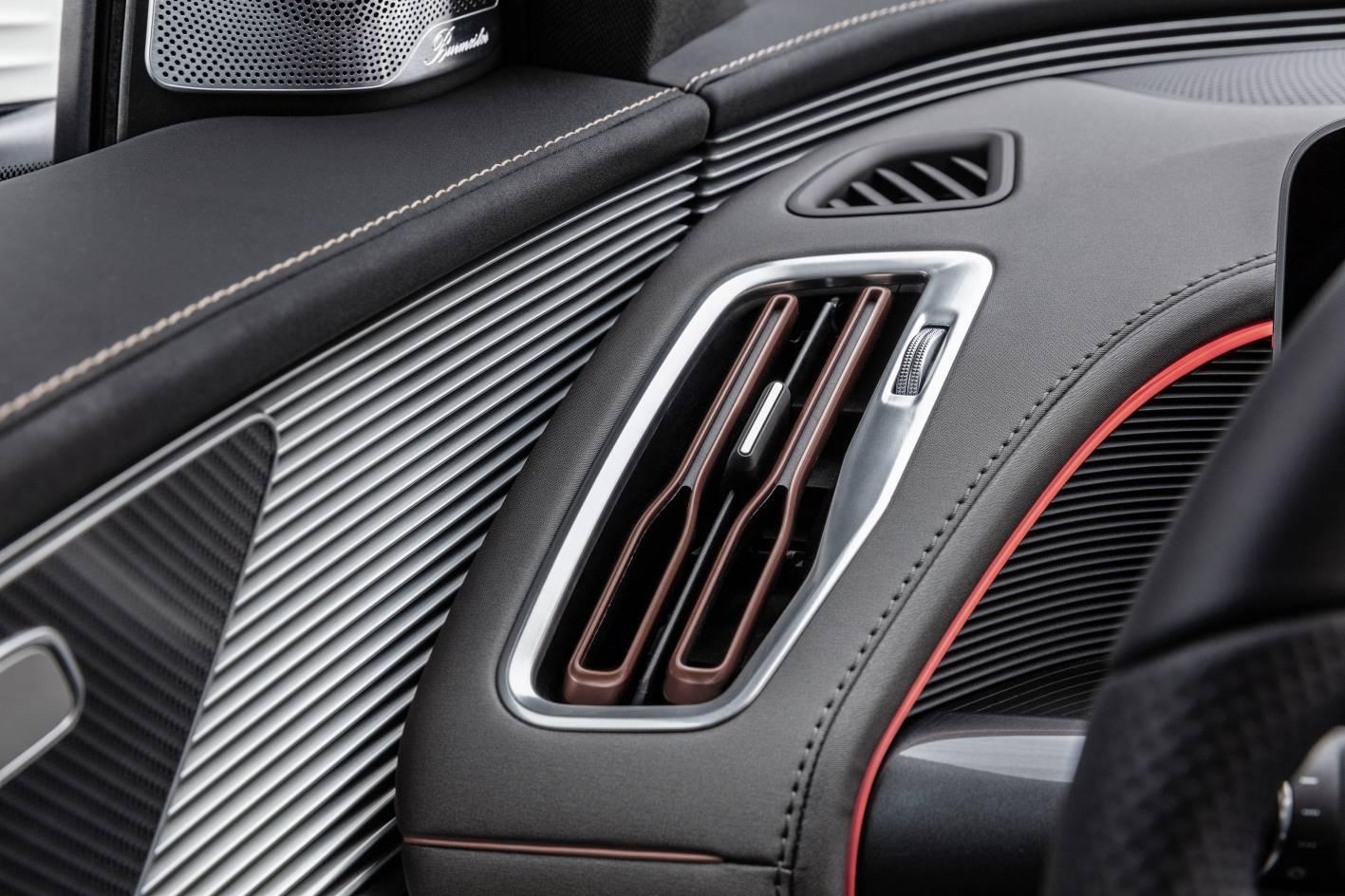 In the process the test experts are able to build upon the extensive findings from their digital testing work, used to ensure both the buildability of the vehicle and for the simulation of e.g. crash behaviour, aerodynamics and NVH: noise, vibration, harshness.

In addition, there are intensive tests on numerous test rigs at the Mercedes-Benz Technology Centre in Sindelfingen. The ratio between digital and real testing is roughly 35 to 65 percent. 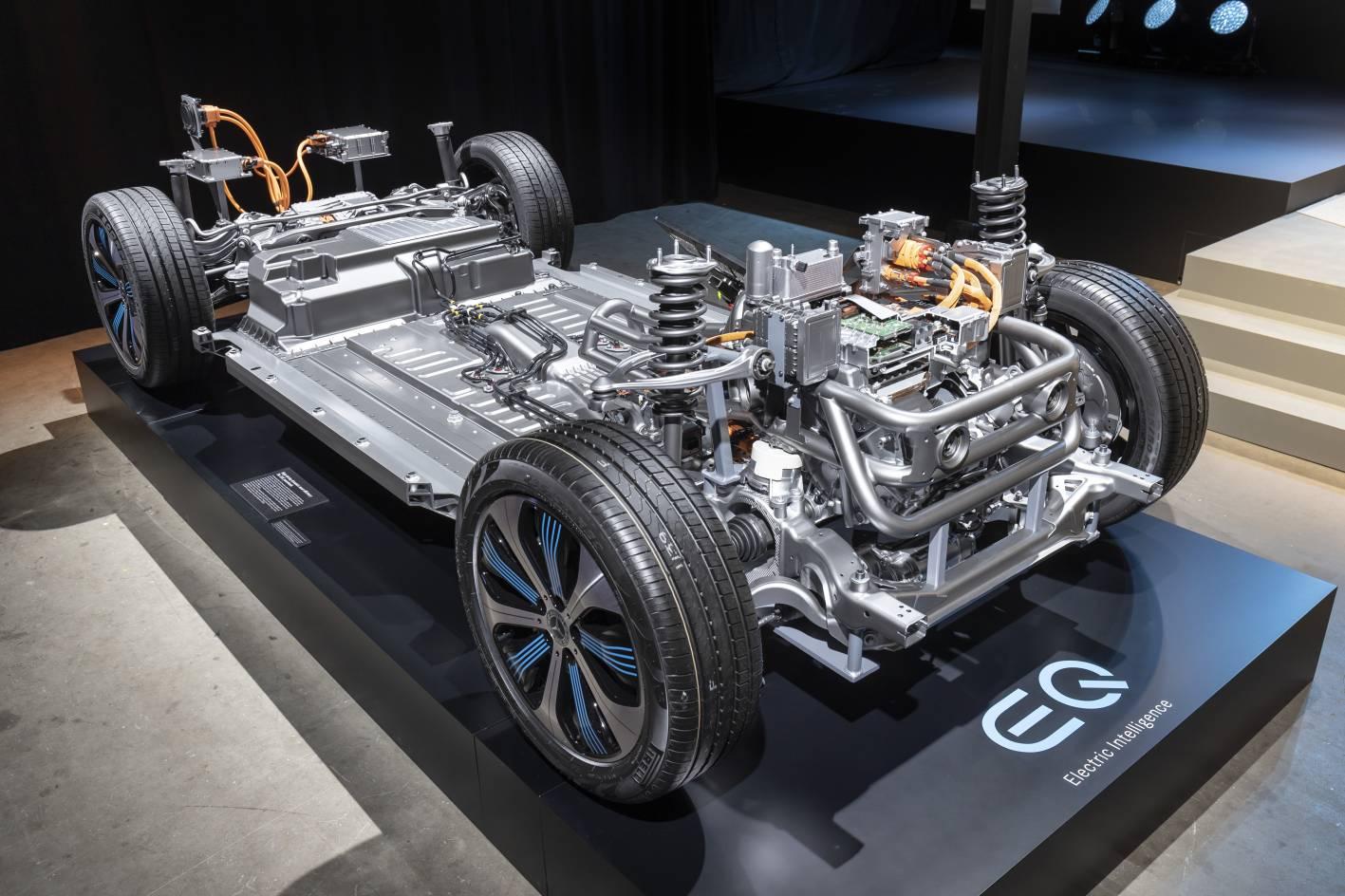 Production: Preparations in full swing in the Bremen plant
Series production of the EQC will start in 2019 at the Mercedes-Benz plant in Bremen. The preparations for this are already fully under way.

The new EQC will be integrated into ongoing series production as a fully electric vehicle. The very latest production technologies will be employed.

One decisive innovation is the so-called battery-joining centre where the EQC undergoes a second “marriage”" following installation of the two electric powerpacks in the bodyshell.

This is where the EQCs are recognised as electric models with the help of data tags attached to the body, and equipped with a battery.

The body is suspended from a so-called C-carrier and deposited on a frame. Support arms raise the battery to the vehicle's floor from below.

An employee monitors the automatic bolting in place. 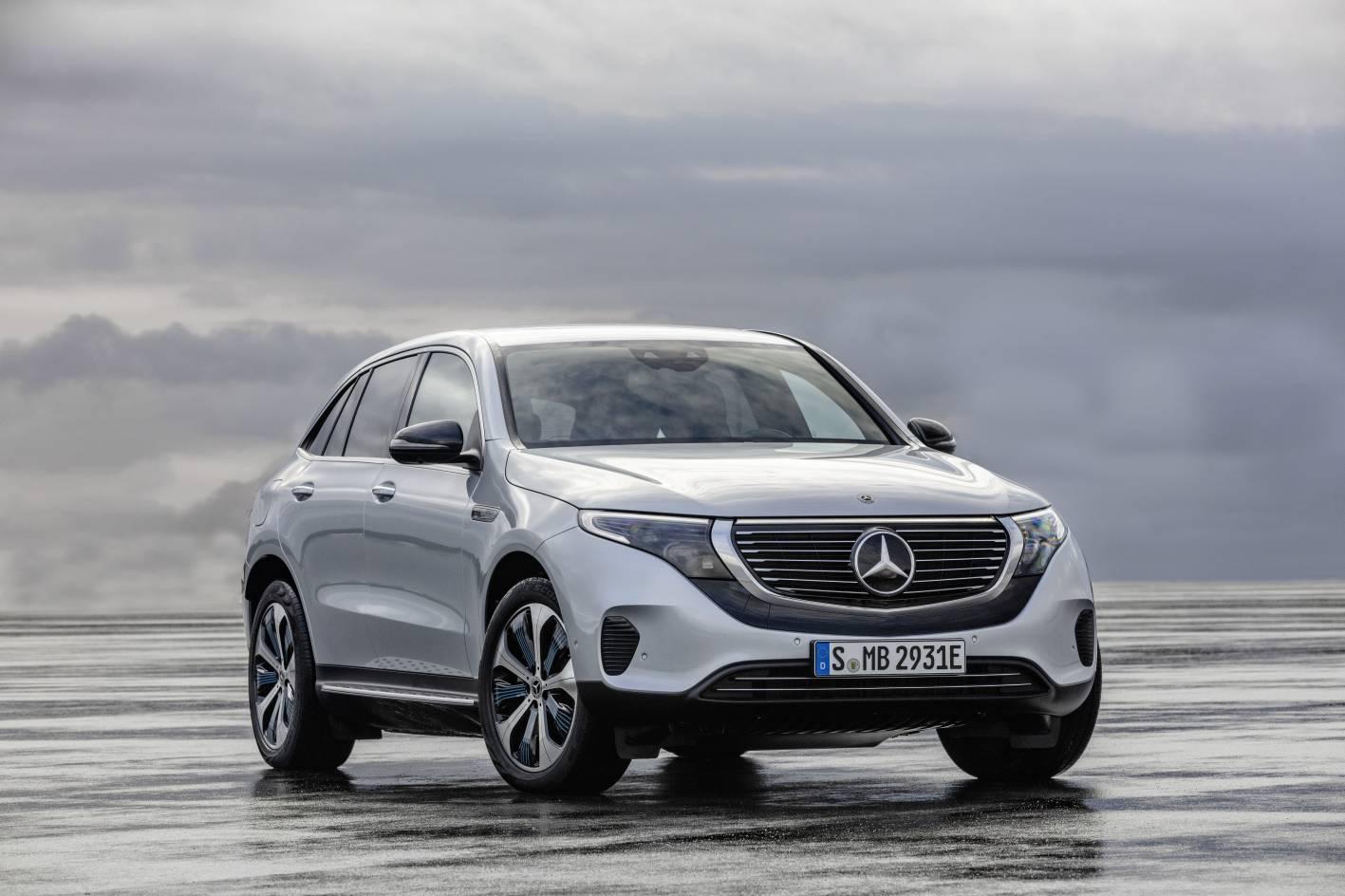 In parallel with this, production of our own batteries for the EQC is coming on stream at the expanded battery plant in Kamenz (near Dresden).

Alongside Bremen, the Sino-German production joint venture Beijing Benz Automotive Co. Ltd. (BBAC) is also preparing for the production start-up of the EQC for the local market.