Subaru have unveiled their ‘Solterra’ EV SUV - the first all-electric model the Japanese brand will offer in Australia.

The collaboration between Toyota and Subaru that delivered the BRZ/86 sports coupe combo a decade ago has now produced a crossover electric SUV pairing, with Toyota offering the bZ4x and Subaru’s sibling being the Solterra.

Although it breaks new ground for Subaru in the EV space, the five-seat Solterra SUV will also uphold the brand’s all-wheel drive tradition by being offered in AWD form when it comes to Australia. 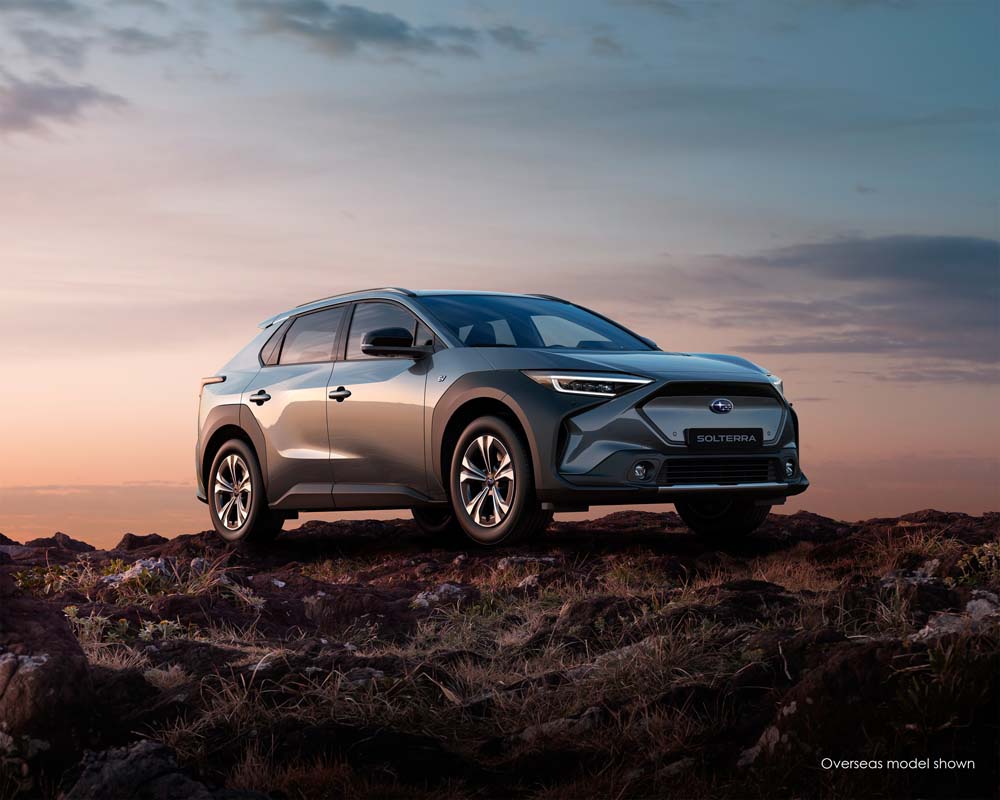 As it’s still approximately a year away from the Australian market, full details on the Solterra’s drivetrain, along with selected specifications, are still to be revealed, with Read adding that more information, including model range and pricing, will come in the future.

The Solterra’s platform is shared with that of the Toyota BZ4x, and while Toyota call their version ‘e-TNGA’, the Subaru equivalent carries an ‘e-Subaru Global Platform’ moniker.

This dedicated battery electric vehicle platform offers EV performance and environmental credentials without compromising on safety, or familiar features and capabilities, according to Subaru. The platform is also said to deliver superior driving dynamics and high stability, with linear handling response to driver input, despite an electric rack-and-pinion steering system.

While the drivetrain combinations are yet to be finalised for Australia, both FWD and AWD are available on the Solterra for overseas markets. The AWD version is considered a certainty to be offered in Australia, in line with Subaru tradition in this field.

The trade-off is that AWD will be more expensive than FWD, but if the FWD variant does come here, it’ll be the first 2WD Subaru offered locally in more than two decades. 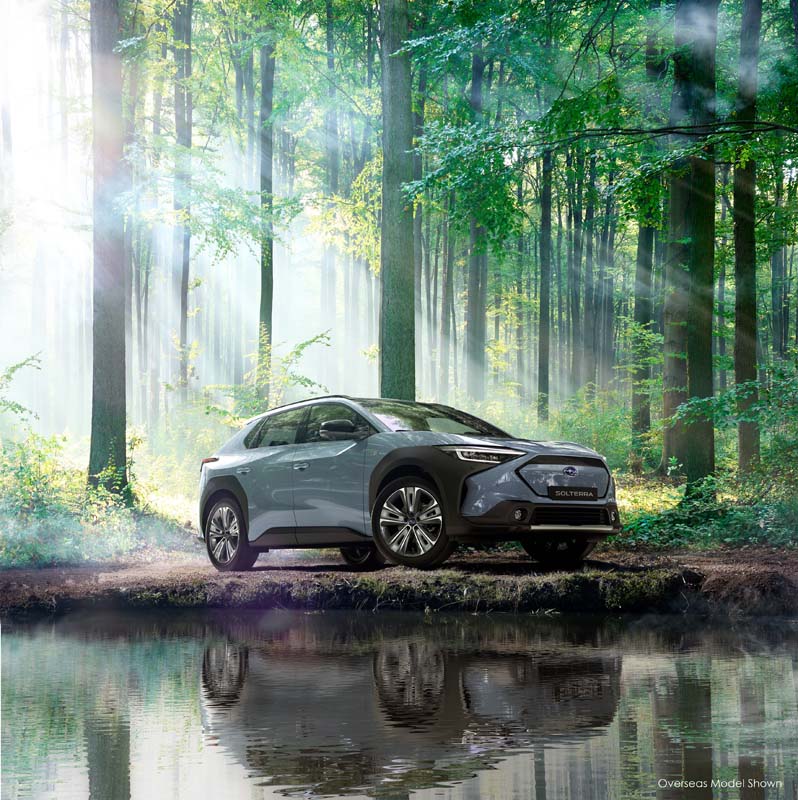 Surprisingly, there’s no massive gap in performance between the two drivetrain configurations, with the single AC synchronous electric motor on the FWD variant producing a maximum 150kW and range in the region of 500km, which is just shy of that offered by the AWD version of the Tesla Model Y. The AWD version of the Solterra uses two smaller motors of 80kW on each axle, so maxes out at 160kW. Range is lower at approximately 460km, which is similar to Hyundai’s Ioniq5 and the Kia EV6. 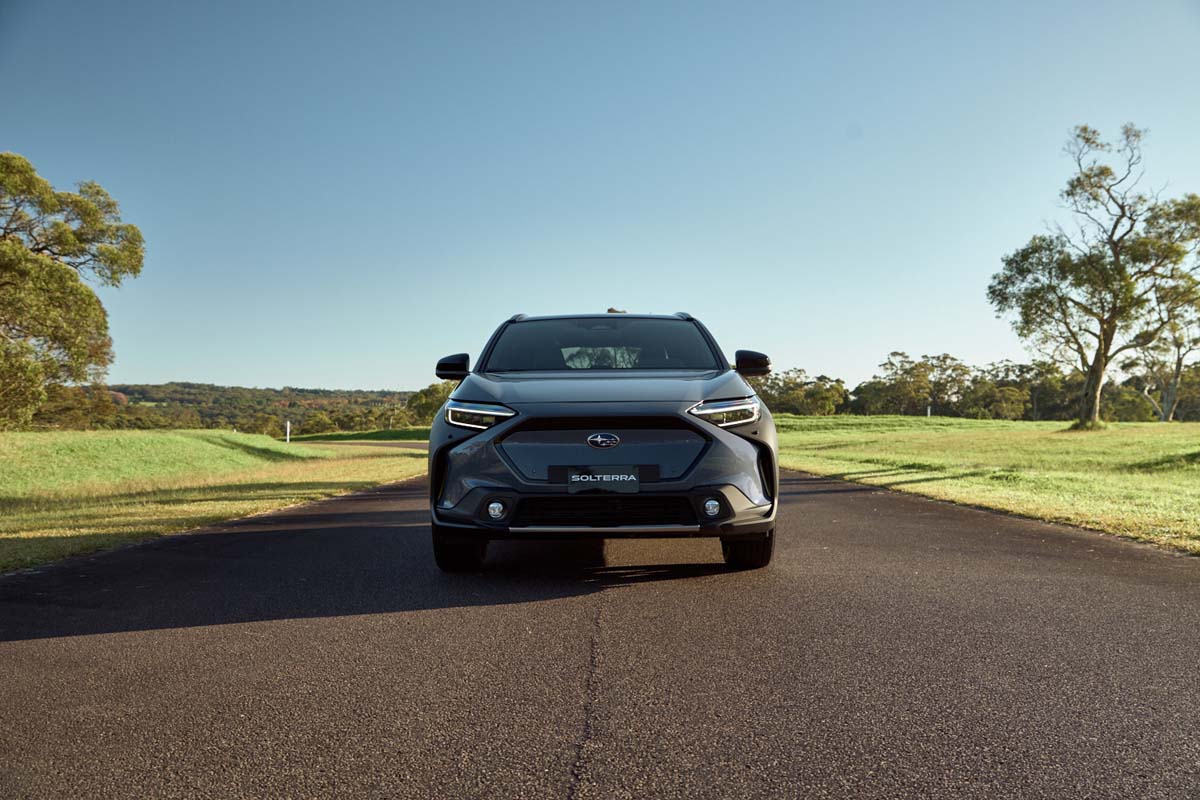 The Solterra’s bZ4x sibling is expected to be available in FWD and AWD form when it comes here, with 0-100km/h acceleration listed at 8.4 seconds in single-motor form and 7.7 seconds with two motors, so expect similar 0-100kmh numbers from the Solterra.

A 71.4kWh lithium-ion battery is common to both AWD and FWD options, with peak AC charge of 6.6kW, rising to a maximum of 150kW on DC. A solar panel insert on the roof to extend driving range will be an option for the Solterra, along with a panoramic sunroof.

Further confirming the likelihood that the Solterra will be AWD only for Australia is Subaru's press statement that the upcoming model will be fitted with their X-Mode AWD control system.

Complementing this is an all-new Grip Control function that’s a form of off-road cruise control, enabling the vehicle to run at a constant speed on rough dirt roads and mildly challenging trails.

Further assisting this capability is what Subaru says are continuously monitored power distribution and brake vectoring from the electric motors, ensuring grip to each wheel is maintained, even in wet conditions and on low-grip surfaces.

Dimensionally, the Solterra is sized between Subaru’s Forester and Outback, but the freedom of the e-Subaru Global Platform means that, while it’s shorter overall than an Outback at 4,690mm, it has a longer wheelbase of 2,850mm, meaning more space inside for its five occupants. Width is 1,860mm and height 1,650mm.

Cabin space measures 1,940mm x 1,515mm, with what appears to be abundant front and rear legroom, judging by the imagery and footage revealed so far. 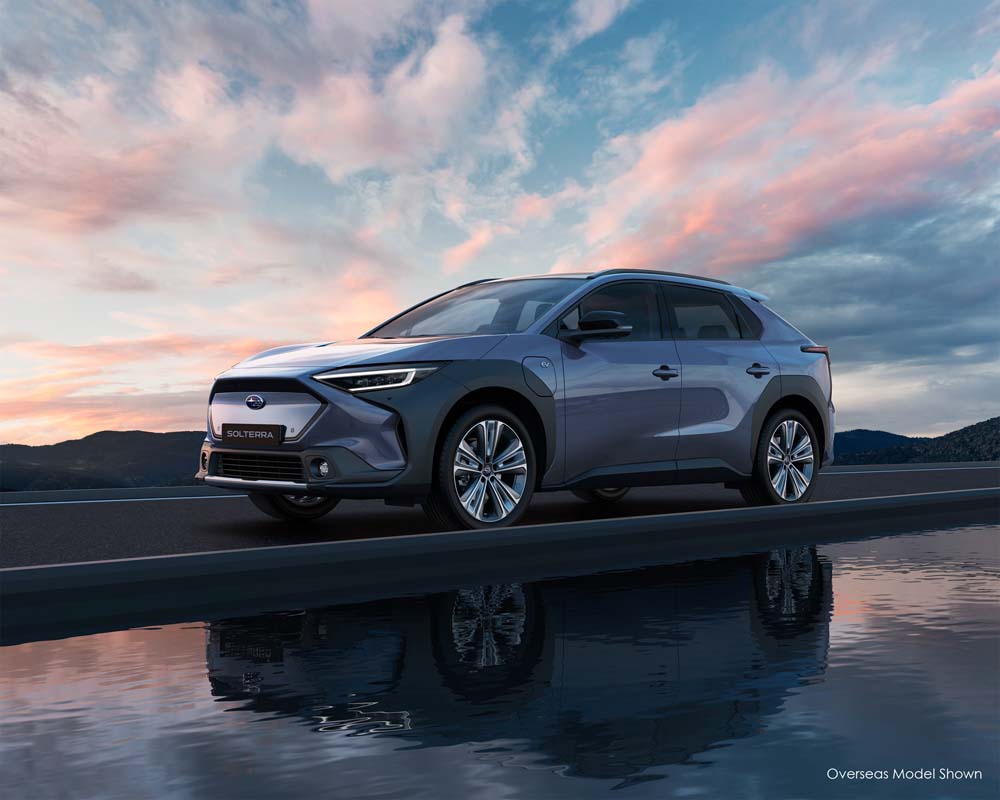 Thanks to the underfloor battery packs (which also form part of the e-Subaru Global Platform’s structure), the Solterra loses out a little in ground clearance, which at 210mm is 10mm less than a Forester, but only 3mm less than an Outback. Weight is slightly to the Outback’s advantage, too, as it tips the scales at 2,200kg GVM, while the Solterra weighs 2,295kg GVM.

Towing capacity, along with luggage capacity, is yet to be revealed, and while the sharply sloping tail design will compromise the latter, roof rails will be standard.

In terms of styling, the bZ4x and Solterra are broadly similar and virtually identical between the wheelarches. Heavily-sculpted flanks and extensive wheelarch cladding are common to both, as are the wheels themselves, which will be available in 18-inch or 20-inch sizes.

In a similar approach to what was done with the BRZ/86 combo, Subaru have added a different headlight design, grille and modified bumper treatment to individualise the Solterra against the bZ4x beyond the application of their own badge. Changes have been made to the rear bumper and tail lights, too, but the differences here are less obvious. 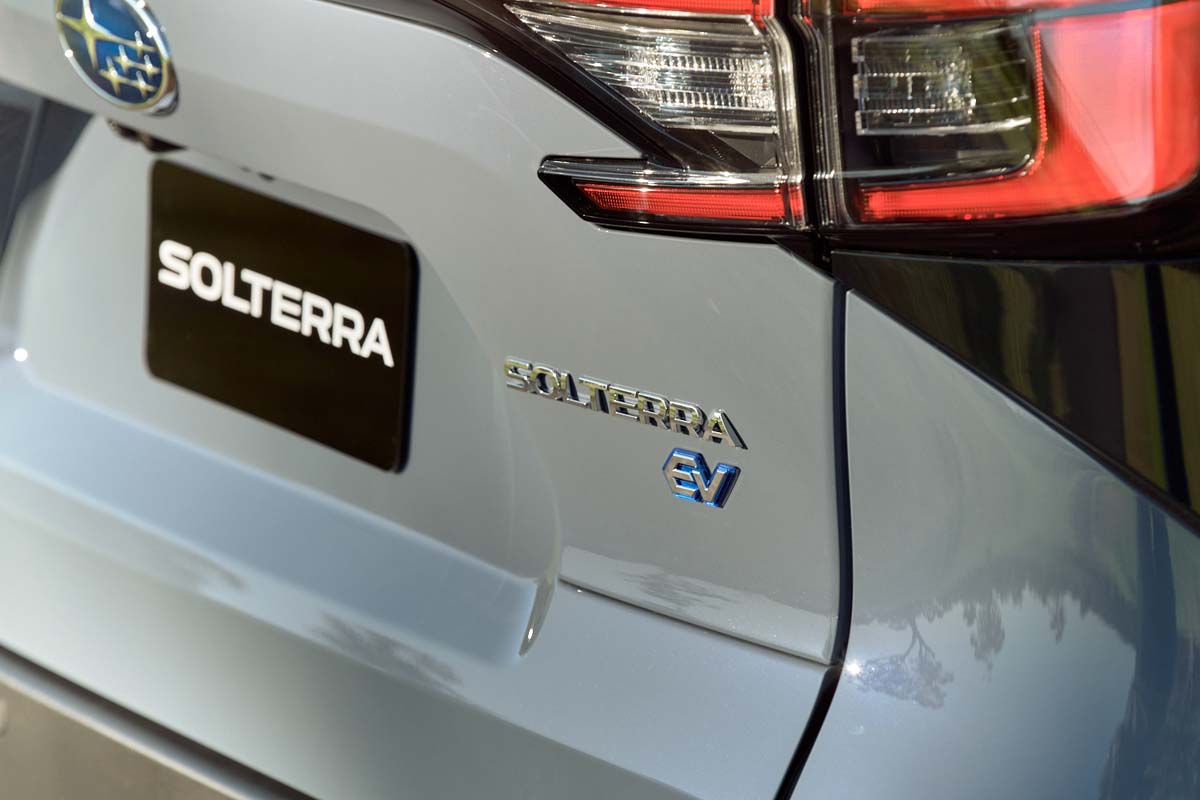 According to Subaru, their hexagonal grille design expresses the energy efficiency of battery electric vehicles, while the bulging wheelarches show strength.

Inside, it seems unlikely the Solterra will offer the aircraft-style control yoke seen on the bZ4x, with an LHD demonstration unit in Australia using a conventional steering wheel. The instrument panel is a surprisingly small unit, set deeply into the dash, while a 12.3-inch horizontal touchscreen flows into a broad centre console that also includes various push-button controls and a wireless charging spot.

Due to arrive in Australia in the middle of 2023, the Solterra will likely be beaten to market by its bZ4x sibling, despite the Toyota’s launch being delayed.

Even though precious little information on the Solterra has been released, with no indication on pricing either, Subaru report that they’ve received 5,000 expressions of interest in three weeks since the upcoming model was officially announced on 13 May.

As Subaru’s first ever electric SUV, the Solterra comes with some high expectations, and will enter a market that will include its Toyota sibling, as well as similar offerings from Kia, Hyundai and Tesla, so pricing will need to be competitive.

For more details, and to add your name to the EOI list, go to: subaru.com.au/solterra