Hyundai’s Ioniq sub-brand has been in existence for just five years, but in that time, it’s made its mark and allowed the Korean carmaker to plant its flag in the EV space.

Offered in hybrid and plug-in hybrid variants, the initial Ioniq models were fairly conventional in appearance – inside and out - but with the first purely electric model recently released under the Ioniq badge, that’s changed. The presentation of the “Seven” electric concept at Automobility LA in November shows more change is coming. 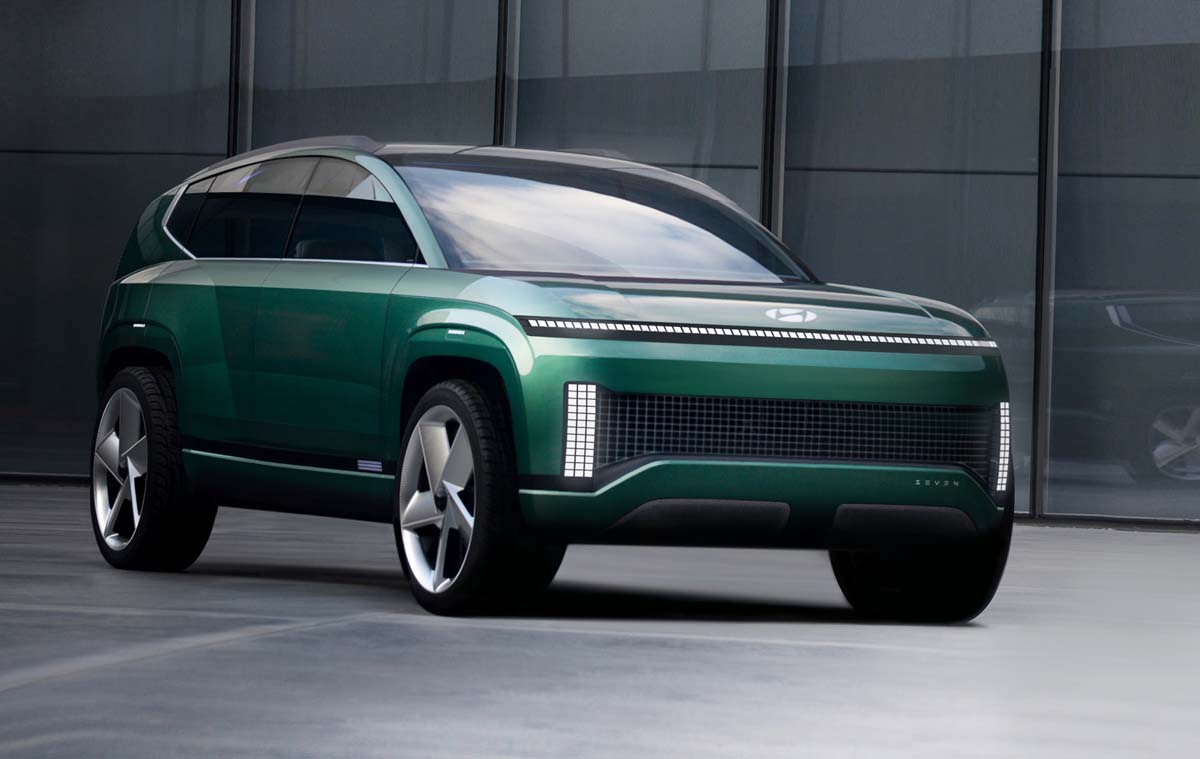 The Seven concept is built on Hyundai’s ‘Electric-Global Modular Platform’ (E-GMP) that’s designed for electric power and electric power only. This EV-only approach to the architecture provides a flat platform and, in the case of the Seven, a long 3200mm wheelbase to allow abundant interior space without having to consider packaging the transmission tunnel, fuel tank and other componentry required for internal combustion engines.

Hyundai hasn’t provided any details on the Seven’s drivetrain, nor whether all four wheels can or will be driven, but they do claim “outstanding driving range and ultra-fast charging capabilities” thanks to the E-GMP platform. According to Hyundai, range of 480km will be possible, while a 350kW charger will allow 10 to 80 per cent battery recharging in approximately 20 minutes.

This freedom has also allowed some new thinking in the exterior design. Hyundai hasn’t totally broken away from conventional automobile styling norms, though. There’s still a bonnet (even though there’s no conventional engine), windscreen, side glass, etc., along with familiar placement of lights, wheels and doors. 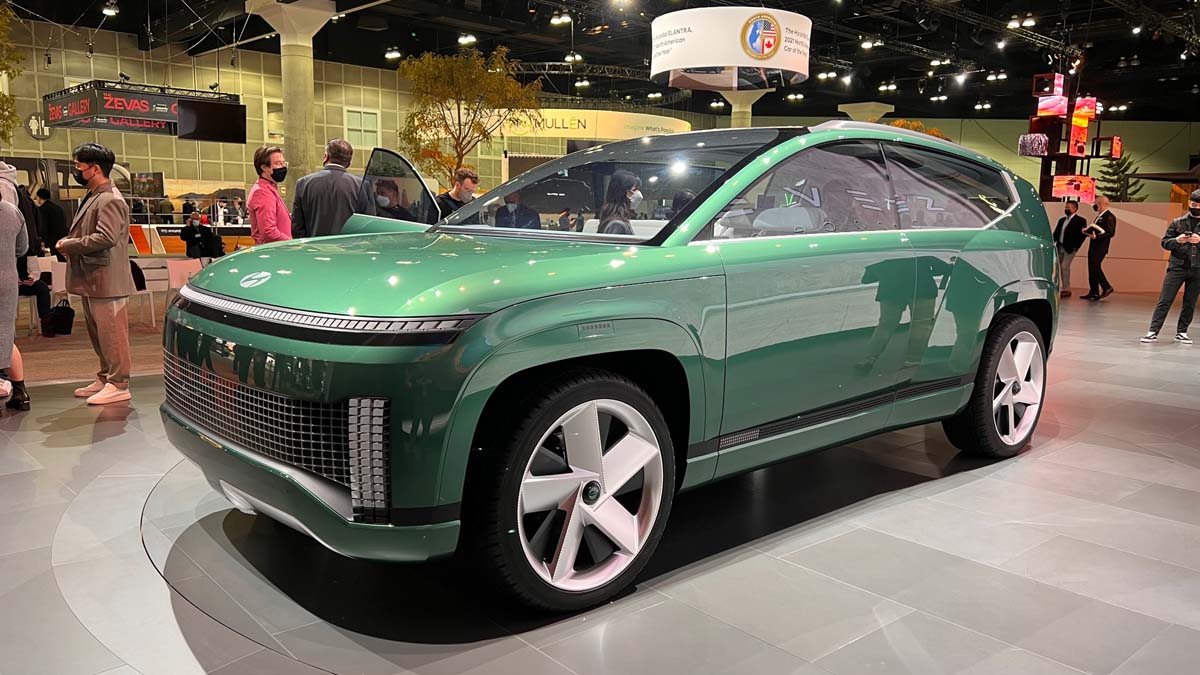 At first glance, there are some similarities to Hyundai’s new Staria people mover in the styling, especially in the near-vertical treatment of the back end, while the squared-off wheelarches can be seen on the latest Tucson SUV, but the Seven is totally new in many other areas.

It may not look it, but the Seven’s shape is said to be aerodynamically sleek. No external mirrors or door handles help here, while ‘active air flaps’ in the wheels close to reduce drag, but can also open to improve brake cooling.

Hyundai call their approach to styling for the Ioniq models ‘Parametric Pixel’ design. This has already been seen in the Ioniq 5 EV hatchback and is now upscaled to an EV SUV, with some – but not all – of what’s seen in the Seven expected to come to market wearing an ‘Ioniq 7’ badge. 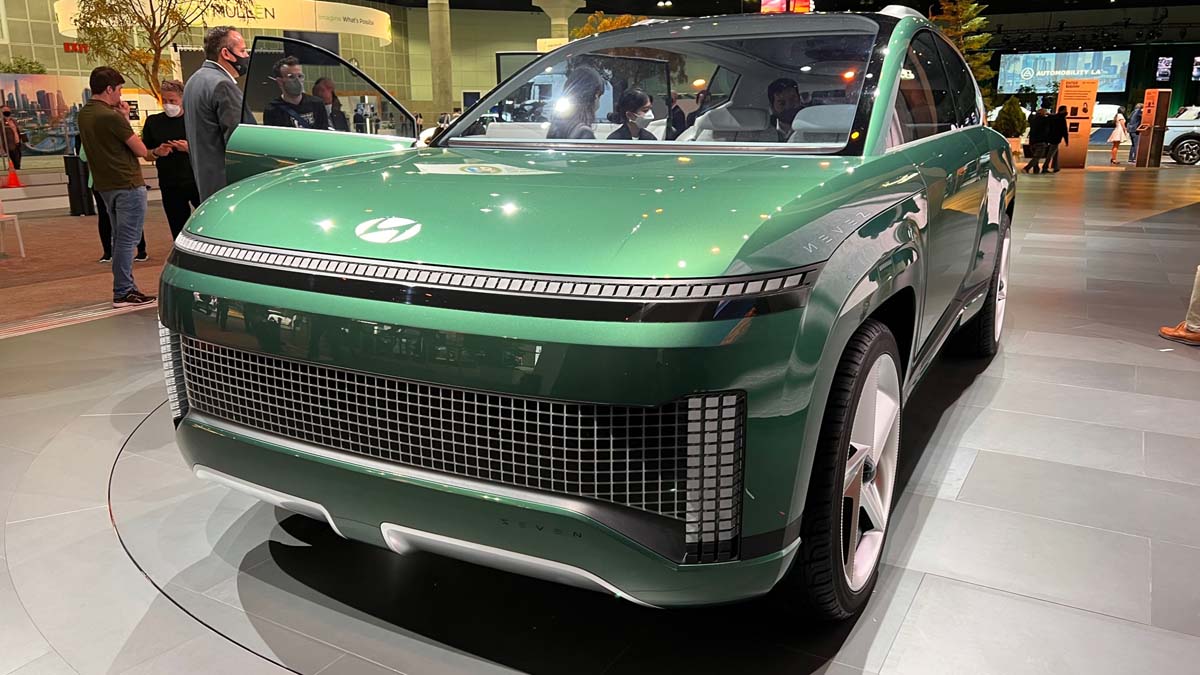 “Seven dares to break from the beaten path,” said SangYup Lee, Senior Vice President, Head of Hyundai Global Design. “Seven paves the way forward for what an SUV needs to become in the EV era with a unique aerodynamic pure form that does not compromise on its rugged personality.”

While the Seven’s exterior space remains somewhat conventional, the interior definitely doesn’t. With so much space provided by the flat platform and pushing the wheels to the corners, Hyundai designers were determined to make the most of it.

“The interior opens up a new dimension of space that cares for its passenger as a family living space,” SangYup Lee added.

If it was a conventional SUV, the Seven could easily accommodate eight people in three rows of seats, but as an alternative to this traditional row-based seating, the concept combines a pair of armchair-style seats with an L-shaped couch and even a footrest. 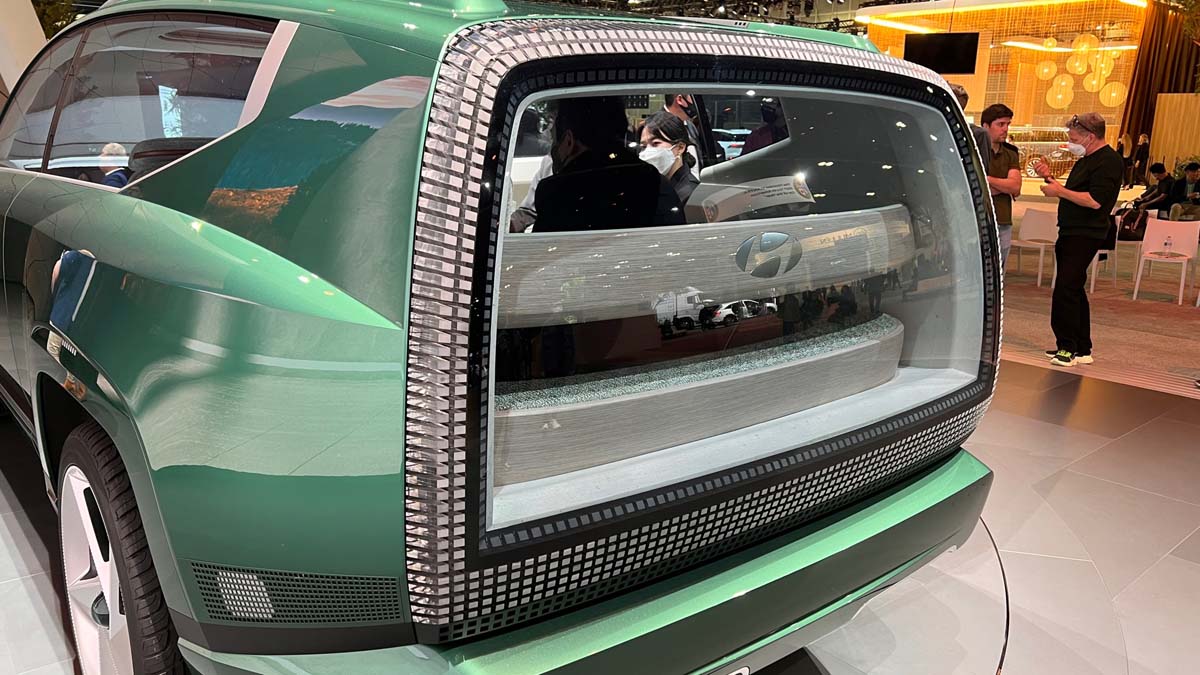 Easy access to this space is provided by the absence of a B-pillar and rear-hinged back doors, but the images presented here show this arrangement only applies to the right-hand side, with a single door on the left.

As well as moving fore and aft, both the armchairs can swivel to face the rear bench. The driver controls fold away when not in use – including when the vehicle is operating autonomously.

The flexible interior space, ability to personalise various in-car functions and incorporation of specially-designed appliances is part of what Hyundai calls a human-centered approach to the Seven’s design.

Those appliances include a built-in fridge and a “shoe care” compartment to “refresh passenger’s footwear”. There’s a Smart Hub graphic user interface incorporated into the interior design, too, while the panoramic sunroof doubles as a screen.

Already a “green” vehicle, being an EV, the Seven concept ups the ante in its eco credentials as a green space, while offering a clean space, too.

Renewable materials were used in the interior construction, while passenger wellbeing technologies, like a Hygiene Airflow System and UVC Sterilisation, have been incorporated. 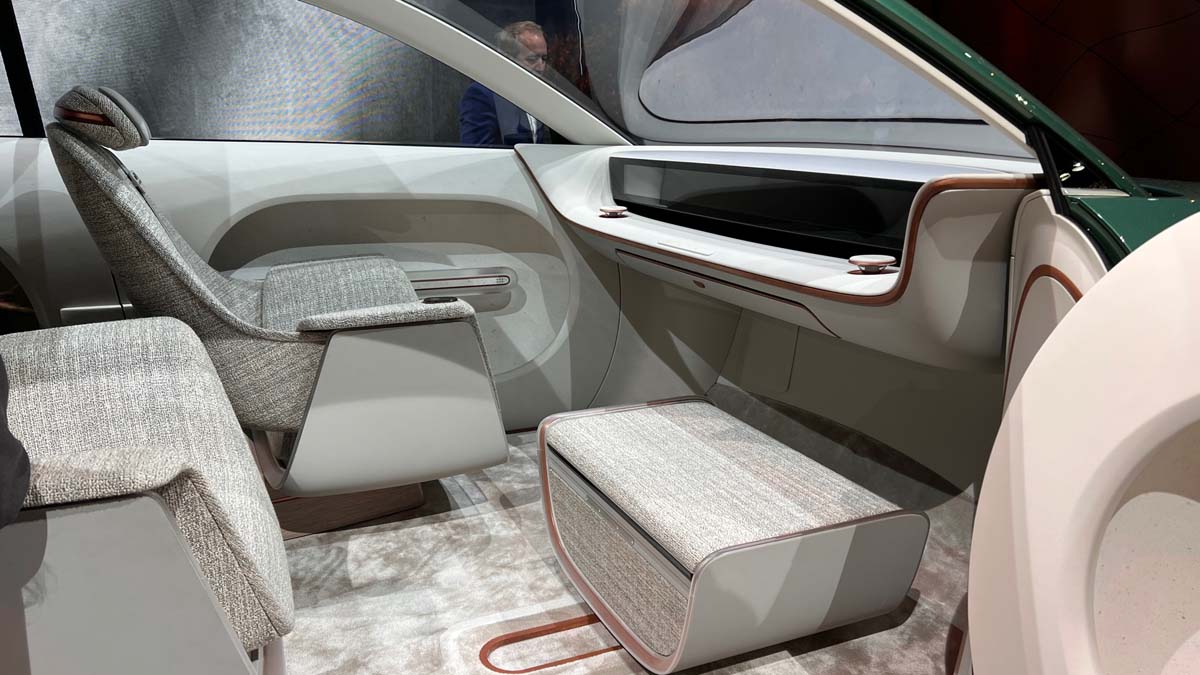 Renewables include bamboo-based timber trim and carpet, while mineral plaster, bio resin for glueing and even the paint is said to come from renewable sources.

The Hygiene Airflow System takes inspiration from passenger jets and operates in two modes. In ‘vertical’ mode, air is drawn in through intakes in the roof rails and flows down through the cabin to extractor vents behind the rear wheels. In ‘horizontal’ mode, air flows in from dashboard-mounted vents like a conventional car.

Hyundai says this system can operate independently and can also isolate the airflow between front and rear occupants. 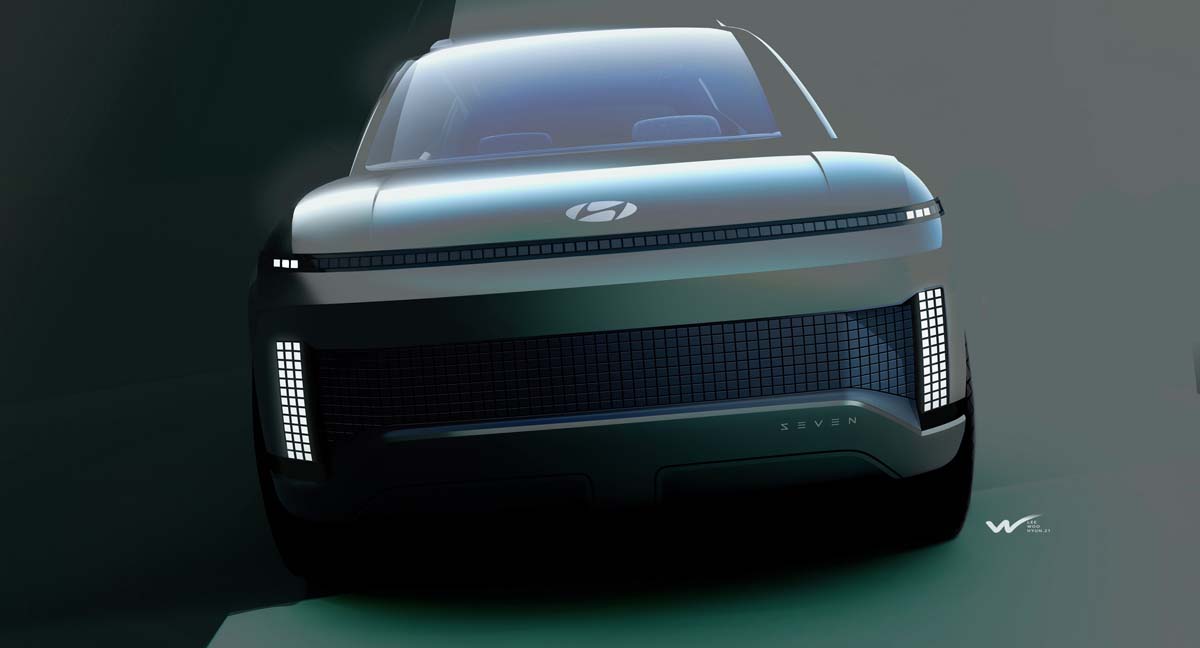 UVC Sterilisation uses sanitising UVC lights built into the doors to help clean the living space of bacteria and viruses. This operates autonomously once the vehicle is vacated of occupants, with the control stick, first-row footrest/storage drawer and speakers deployed to receive cleansing UVC light.

Sanitising storage compartments in the rear bench seat and Smart Hub console for personal belongings offer the same function, while hygienically-treated fabric on the seats are said to remain clean at all times.

As mentioned, the Seven concept previews a future electric SUV, or SUEV (Sport Utility Electric Vehicle), as Hyundai are labelling it, and will be part of the Ioniq family, most likely wearing an Ioniq 7 badge.

This is all part of Hyundai Motor Company’s commitment to reach carbon neutrality by 2045.