A new era for Ford’s venerable F-150 begins with production of the first electrified versions of the all-American pickup.

Brought to you by Castrol MAGNATEC

A year after Ford broke ground on the new Rouge Electric Vehicle Center – at the home of Ford in Dearborn, Michigan – the first pre-production examples of the all-electric F-150 Lightning 4x4 pickup have rolled off the line. 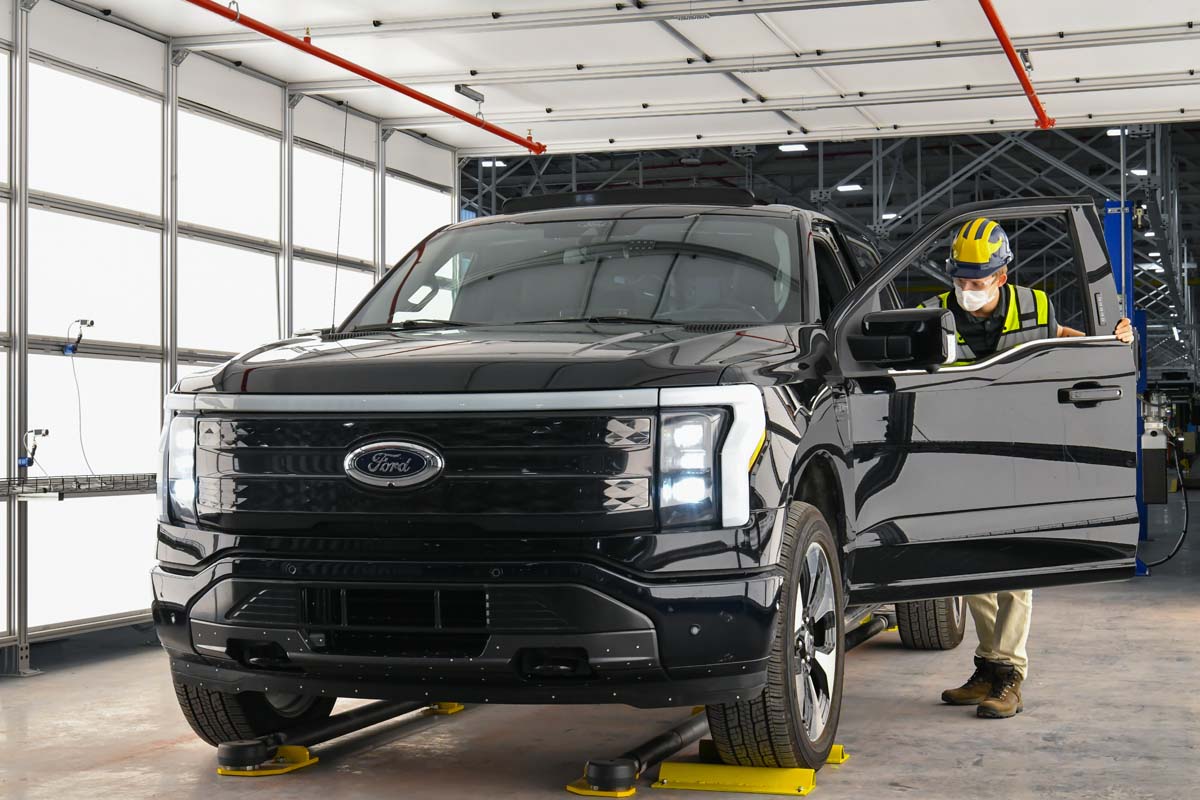 Ford announced back in May that an F-150 EV was coming, and now that production is underway, 450 new jobs will be added and a further US$250 million will be spent upgrading not only the Rouge plant, but related facilities, with the goal of ultimately producing 80,000 electric trucks annually. 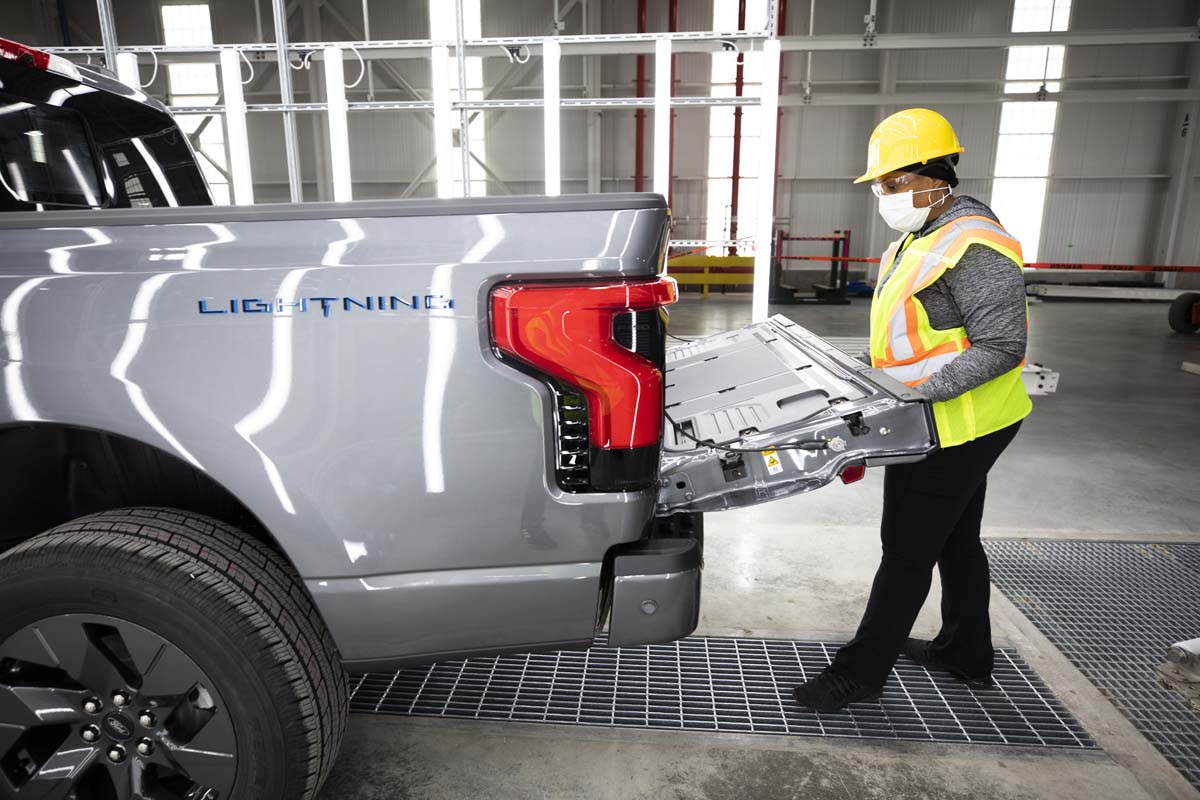 “We knew the F-150 Lightning was special, but the interest from the public has surpassed our highest expectations and changed the conversation around electric vehicles. So we are doubling down, adding jobs and investment to increase production,” said Bill Ford, executive chair, Ford Motor Company.

“This truck and the Ford-UAW workers who are assembling it in Michigan have a chance to make history and lead the electric vehicle movement in America.”

The interest in the F-150 Lightning that Bill Ford refers to sat at 150,000 reservations by mid-September, which is expected to increase once the first examples hit the road.

With an electric motor on each axle, every F-150 Lightning will be four-wheel drive, while the batteries take up most of the underfloor space between the axles.

Even at this pre-production stage, some of the specs and figures released by Ford are estimates and targets, so they’re yet to be confirmed. These include up to 420kW (563hp) and 1,050Nm (775lb/ft), along with an estimated range of 482km (300 miles) and 0-100km/h acceleration of around 4.5 seconds. The latter is better than the high-performance F-150 Raptor. 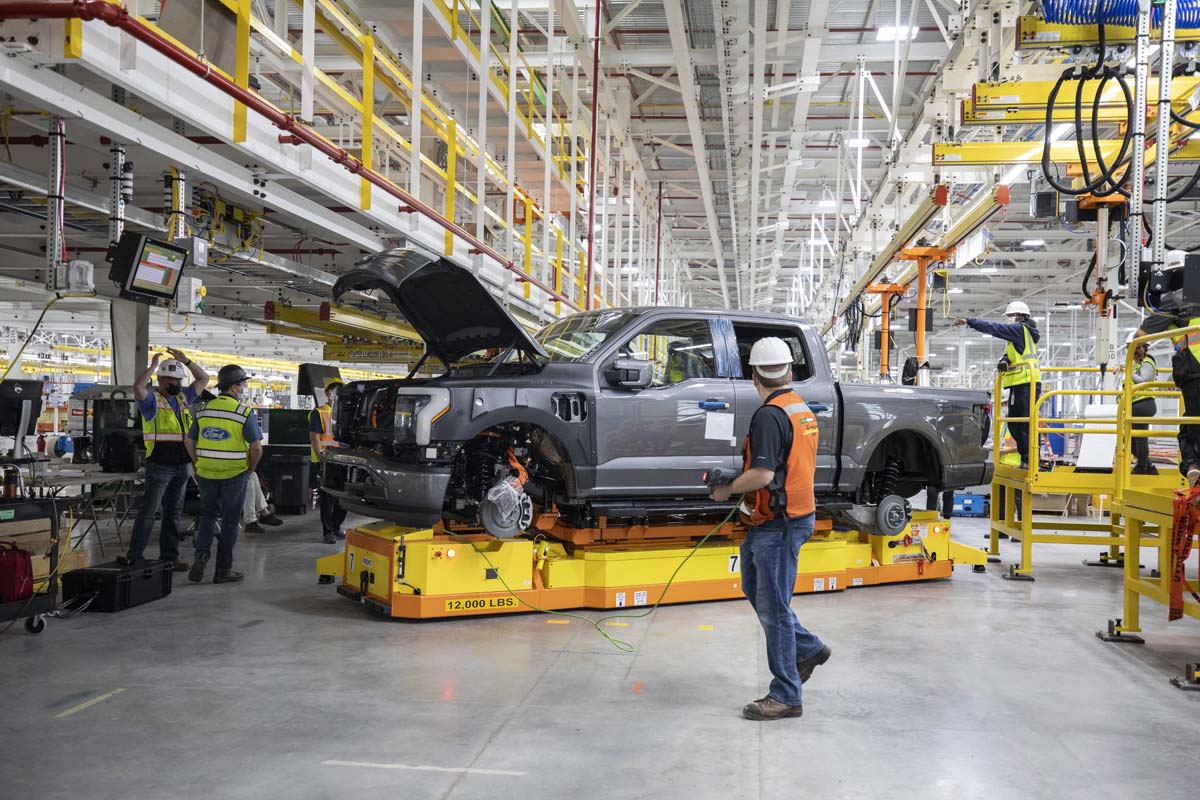 Even if these estimates are a little off, the Lightning will still offer the most torque of any F-150 in the model’s history.

Both of the available batteries are lithium-ion units, liquid-cooled with internal battery management. Recharging times vary from as little as 41 minutes (for 80 per cent charge) with a DC fast charger, to 19 hours with a 32A/240W mobile charger on a conventional household plug. 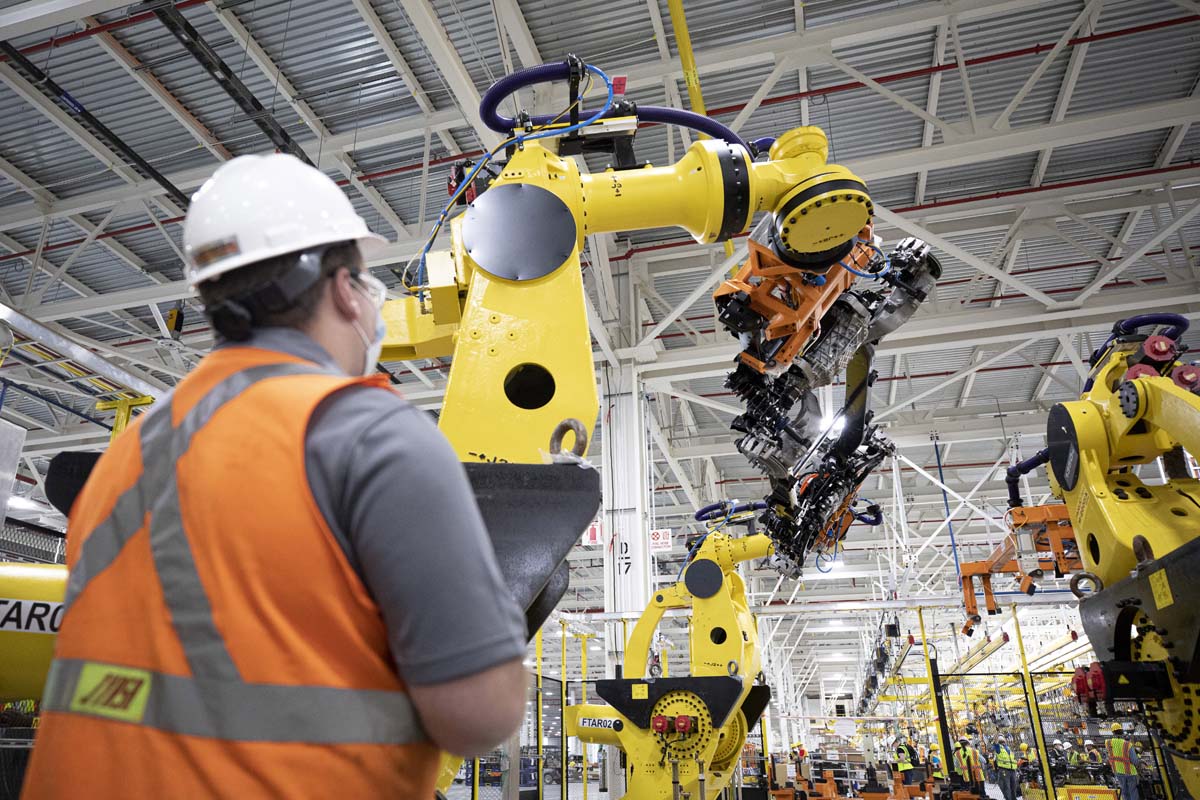 Ford adds that the ‘Built Ford Tough’ mantra of their pickups has not been compromised for the Lightning, which features an all-new frame and a body built from high-strength, military-grade aluminium. To protect the batteries, heavy-duty skidplates underneath are standard.

The initial body configuration will be a SuperCrew Cab with a 1.67 metre (5.5 foot) tub. This is the same as a combustion-engined F-150 SuperCrew, so existing accessories, like sports bars, ladder racks, side steps, load bed extenders, etc., can be used. 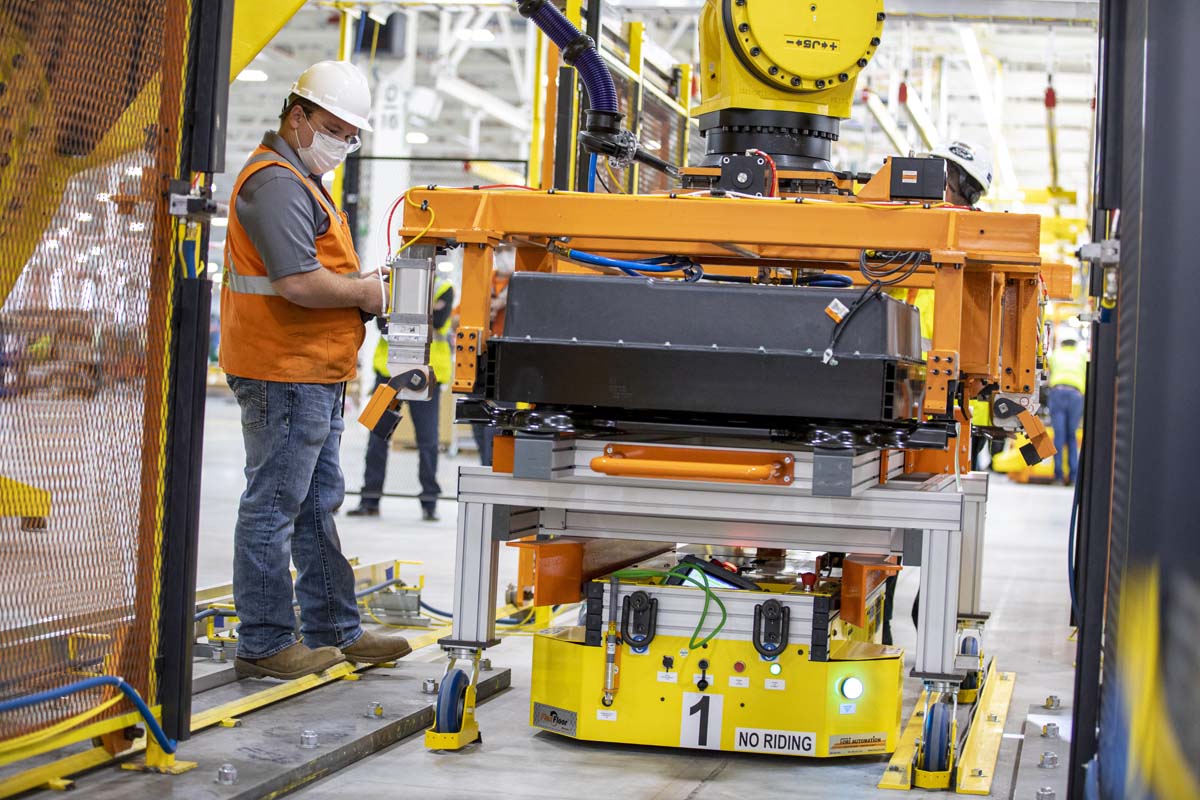 Independent rear suspension also features, which is an F-150 first. While it obvious benefits in on-road ride and handling, this isn’t an upgrade for the sake of it – IRS was necessary in order to fit the electric motor on the rear axle.

The high-tech treatment of the F-150 Lightning doesn’t end with the drivetrain. Ford says the pickup will boast a range of modern convenience features inside, while also being the most connected truck they’ve ever offered. 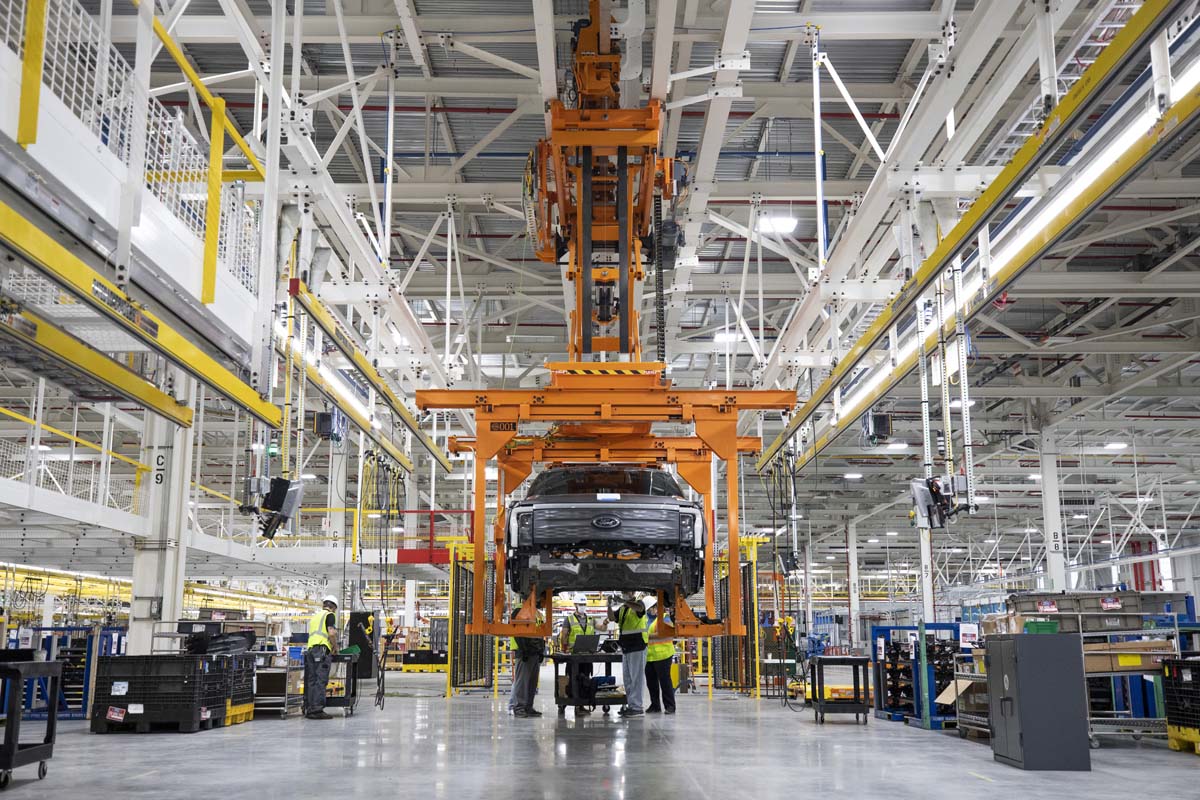 The dash is dominated by a huge 15.5-inch vertically-mounted touchscreen, while a wealth of new features and apps make it easier to receive over-the-air software updates, as well as enhanced driver assistance features, like the ‘BlueCruise’ semi-autonomous driving system. Replacing Active Drive Assist, BlueCruise is a Level 2 system, so isn’t a full auto pilot as such, but does allow hands-free driving on designated highways in the US and Canada.

While some EVs are stratospheric in terms of pricing, the F-150 Lightning will be affordable in US terms. Pricing starts at US$41,699, which drops under $40K when various federal and state EV tax breaks are added. 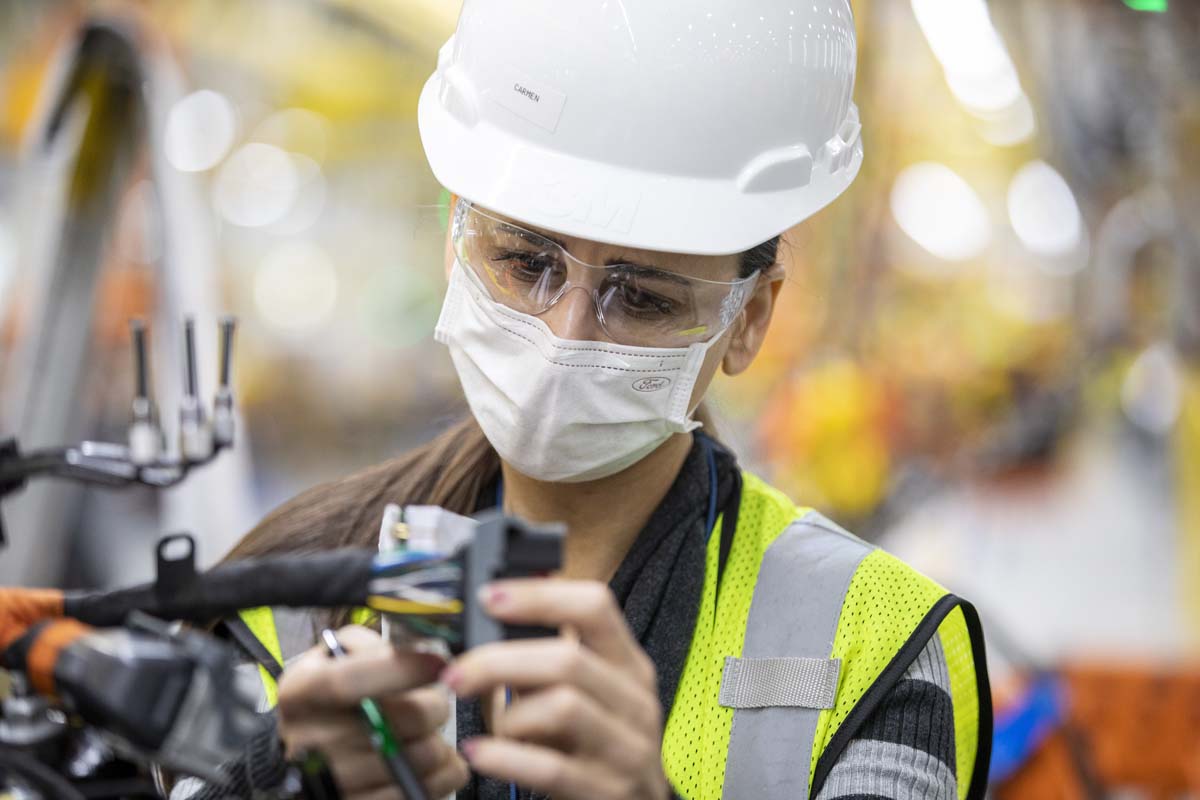 This pricing is achieved partly due to the sort of volume that Ford can build – and sell – vehicles in, as well as the fact that the F-150 Lightning doesn’t come with some of the bells and whistles seen on its rivals, which include the GMC Hummer EV, Tesla Cybertruck and Rivian R1T.

A New Class of Off-Roader?

While it’s a tarmac beast first and foremost, the F-150 Lightning’s capabilities off-road remain to be seen.

There’s no engine to drown, but how watertight the batteries and electric motors are would be a constant source of anxiety. Perhaps acknowledging this, no wading depth has been listed in the specifications released to date.

There’s no air suspension, and the IRS isn’t great for low-speed off-roading, but the instant and abundant torque should make up for that. Another positive is the abundant use of aluminium, which should make the F-150 Lightning light on its feet over rough trails – at least in full-size pickup terms.

A full-size spare wheel is standard and there looks to be enough space in the wheelarches to take more aggressive off-road tyres.

As with the conventional F-150, the Lightning version is not manufactured in right-hand drive, which means there’s no likelihood of Ford offering it in Australia. That leaves it up to specialty import and conversion companies like Harrison F Trucks for local enthusiasts to get their hands on a Lightning.