Ford’s all-electric F-150 Lightning four-wheel drive pickup has been launched in the US – and it’s already a sellout.

April 26 marked the first day of a new era for the Ford Motor Company, with series production of the F-150 Lightning commencing at Ford’s new Rouge Electric Vehicle Center. 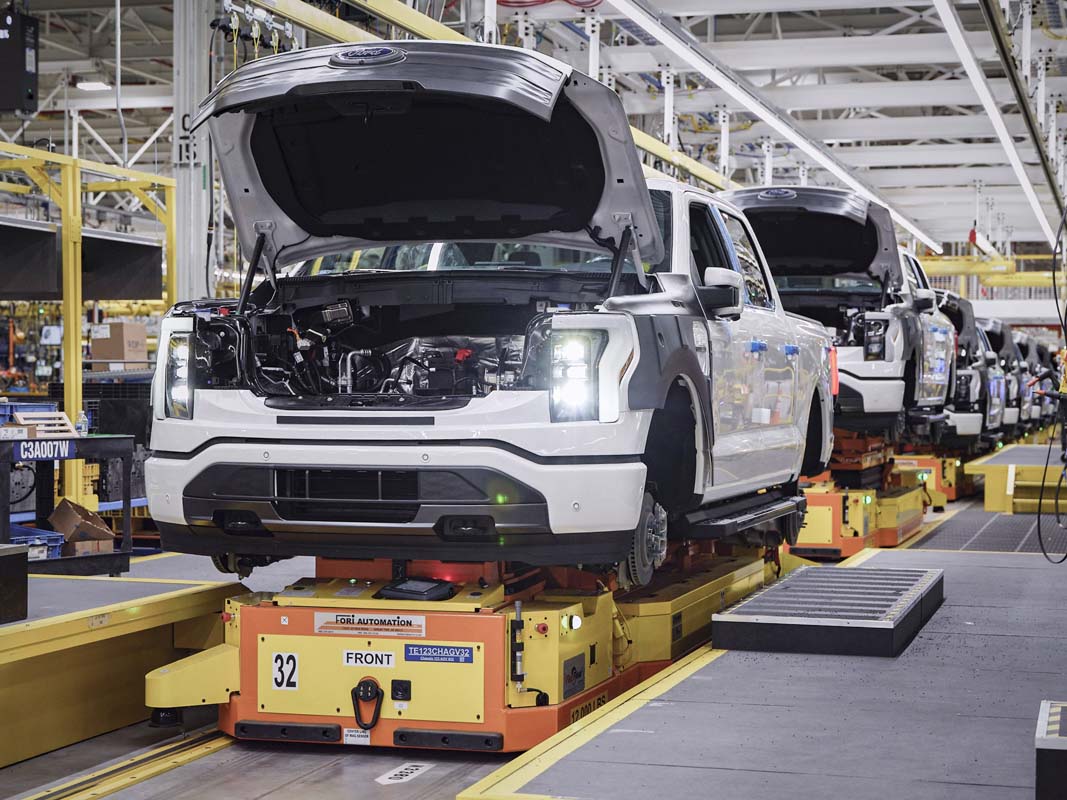 In what Ford are calling a milestone moment in America’s shift to electric vehicles, the first production F-150 Lightning EVs rolled off the assembly line to what is said to be unprecedented demand, with more than 200,000 reservations ahead of the official launch.

“The Rouge is where Ford perfected the moving assembly line, making it a fitting backdrop as we make history again. The stunning anticipation for F-150 Lightning is a credit to the work of our Ford engineers and designers, and the UAW team members who are building these trucks with pride.”

Ford announced the conversion of their historic Rouge complex back in September, 2020, so the transition from a conventional auto factory to an ultra-modern plant for EV production has taken just over 18 months.

That transition included the replacement of traditional in-floor conveyor lines with robotic Autonomous Guided Vehicles that move each F-150 Lightning pickup from station to station in the plant. This is a first for any Ford factory. 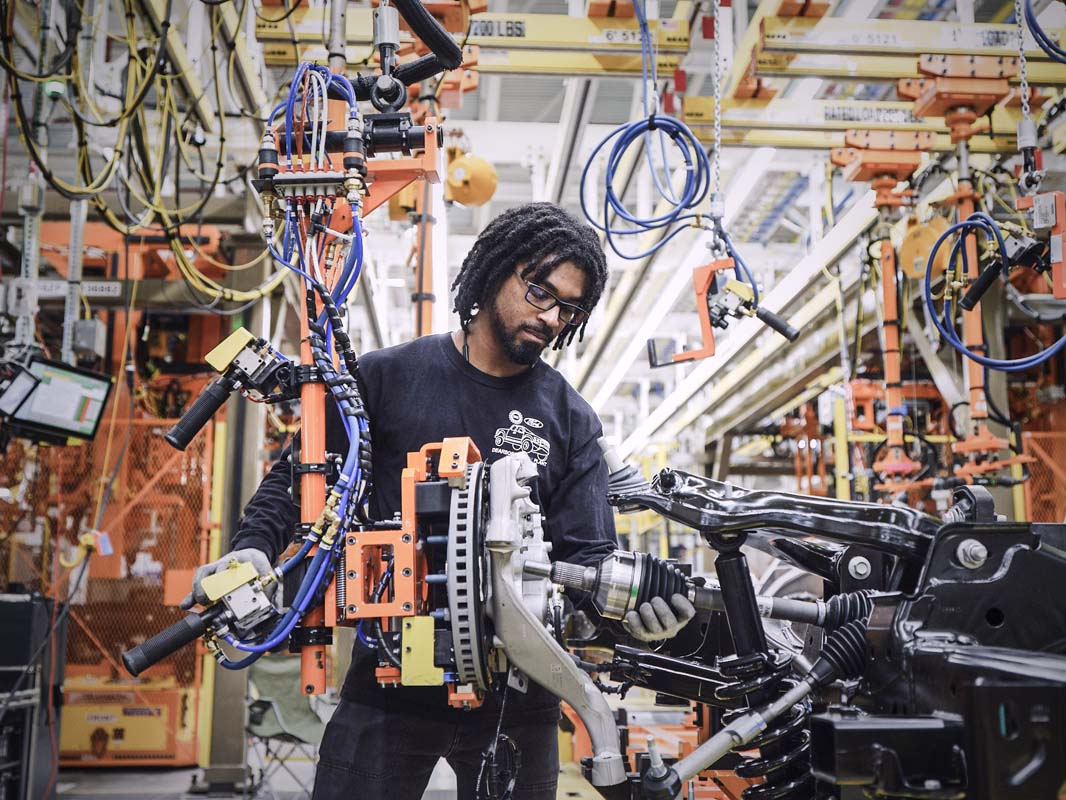 According to Ford, these Autonomous Guided Vehicles create more flexibility in the plant, allowing for additional production output, quality checks and product customisation, amongst other benefits. Furthermore, changes can be made quickly without the constraints of a typical assembly line that requires floor chains, moving mats, conveyors and overhead cranes.

The refitted Rouge plant also uses ‘cobots’ - collaborative robots - that work alongside people and help with tasks that would be ergonomically challenging for humans. 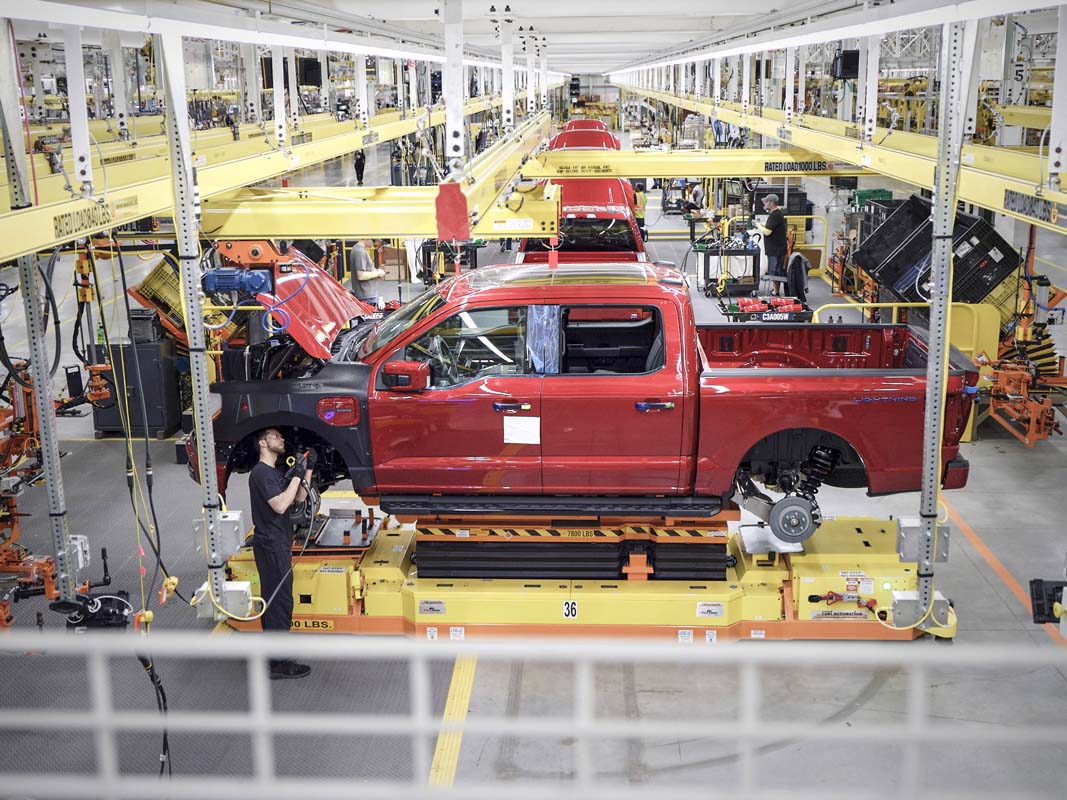 High demand for the F-150 Lightning will put these new technologies at the Rouge Electric Vehicle Center to the test, with production doubled from initial forecasts and set to increase to as much as 150,000 units annually by 2023.

With the conventional, combustion engine F-150 being Ford’s best seller and America’s No.1 vehicle for decades, the F-150 Lightning will also figure prominently in Ford’s plans to deliver more than 2 million electric vehicles annually by 2026. If achieved, this would account for around one third of Ford’s current volume. Longer term, the goal is for EVs to make up half the company’s global vehicle output by 2030.

“It’s not every day that you get to launch a truck that will change the way Americans feel about electric vehicles,” said Linda Zhang, F-150 Lightning chief program engineer.

“The team has done a phenomenal job ensuring we are offering customers unique features only made possible by the electric power unit. But it’s the drive experience that will blow people’s minds. It is simply effortless.” 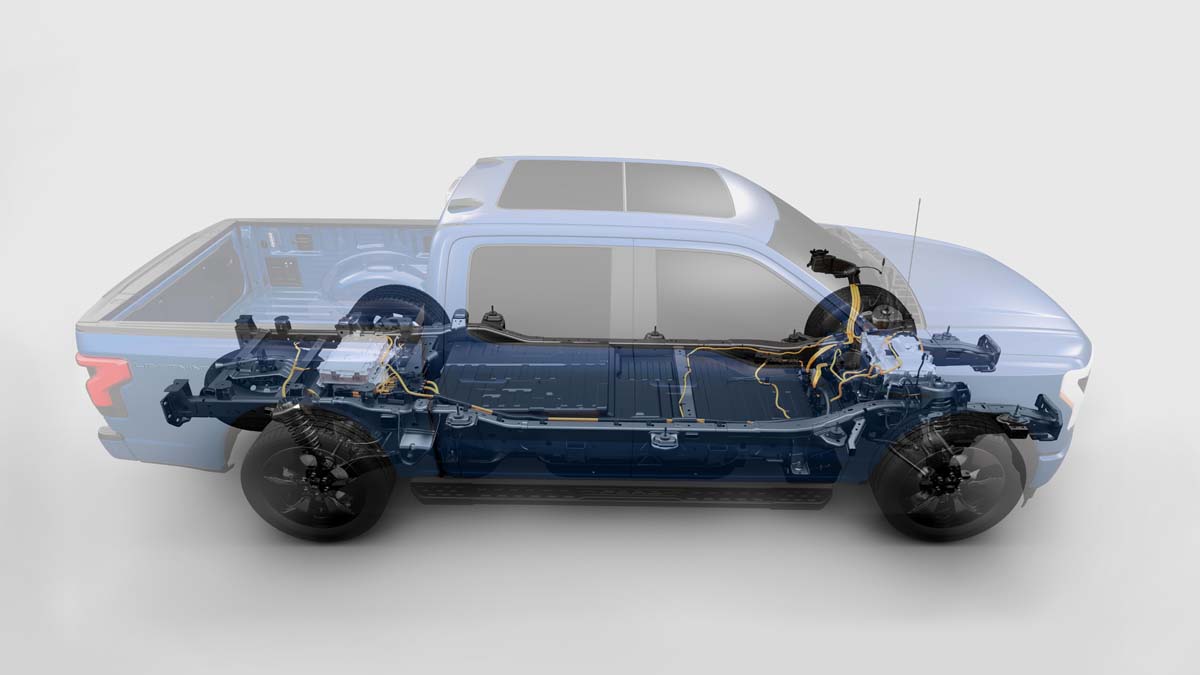 The debut F-150 Lightning is powered by two electric motors (one on each axle) for four-wheel drive and a claimed combined output of 426hp (317kW) with a standard battery pack or 563hp (420kW) with an extended-range battery pack.

Maximum torque of 775lb/ft (1050Nm) is common to both battery options and is the most torque ever offered in a production F-150, while 0-100km/h acceleration of around 4.5 seconds also sets a new F-150 benchmark. It should be noted, though, that the acceleration figure is achieved with the larger of the two battery packs.

The battery pack is mounted between the chassis rails, and of the two different battery capacities available, the standard-range type offers around 230 miles (370km), while the extended-range kicks that up to 320 miles (515km) approximately.

Early adopters of the F-150 Lightning will have access to Ford’s ‘BlueOval Charge Network,’ which is the largest public charging network in North America offered by an auto manufacturer.

For faster charging, an available 150kW DC home charging station can achieve up to 80 per cent of battery capacity in around 40 minutes. 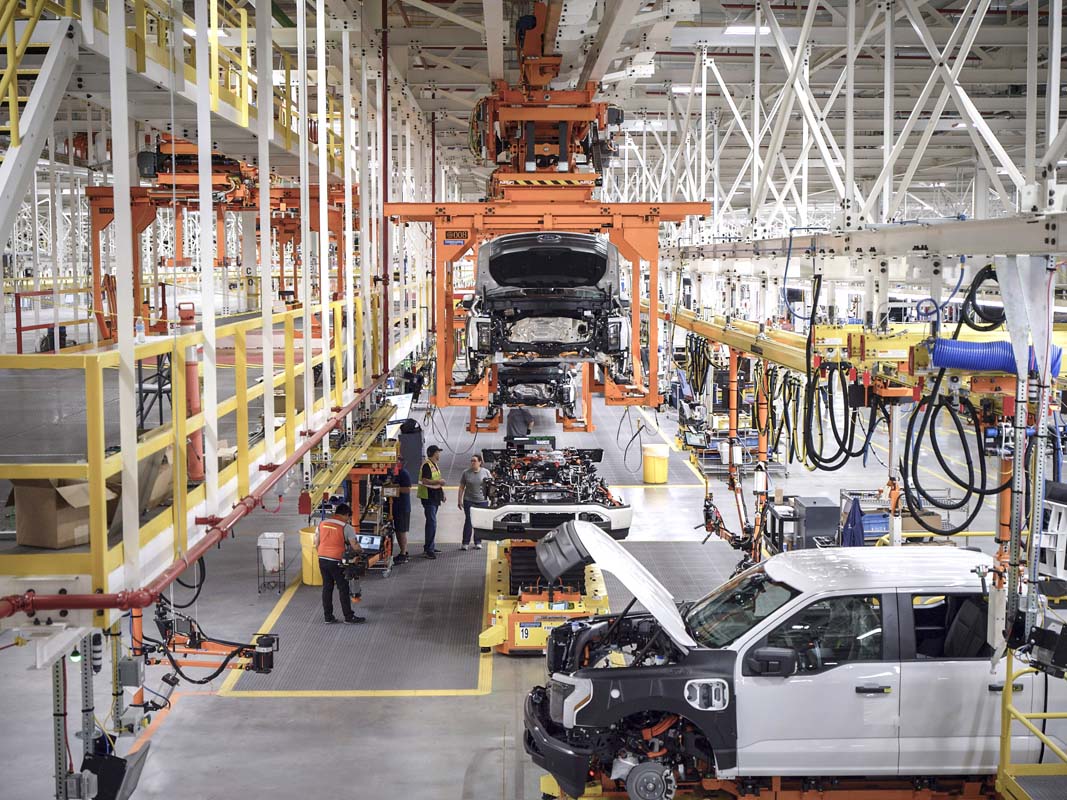 Furthermore, with a separate home integration system, a fully-charged F-150 Lightning can feed electricity back into the house for up to three days in the event of a power outage. The ability to recharge other electric vehicles and even offer power back to the grid is also possible.

At a more practical level, the F-150 Lightning features a total of eleven powerpoints across the rear tub and ‘frunk’ front storage space to power tools on the worksite, or lighting and heating at the campsite. The inbuilt Pro Power Onboard system delivers up to 9.6kW, with the frunk, or ‘Mega Power Frunk’ to give it its official name, offering 2.4kW of exportable power. 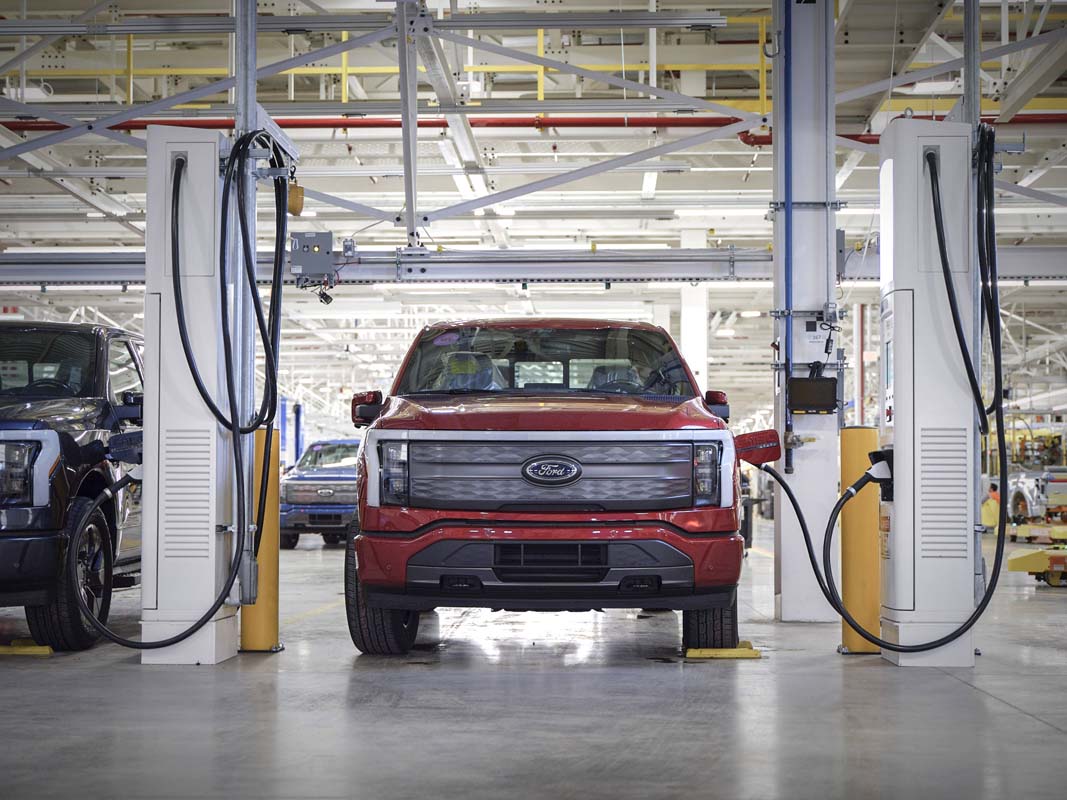 Something of a party piece in the F-150 Lightning, the Mega Power Frunk has a 400-litre capacity, with built-in lighting and two USB outlets, as well as the aforementioned powerpoints. The lockable frunk can also serve as an icebox to keep drinks and food cool, as it’s drainable and washable.

Outside of the frunk, other practicalities include a 907kg maximum payload and towing capacity of up to 4536kg, with towing and trailer reversing assistance technologies built in.

For now, the F-150 Lightning will only be offered as a dual cab pickup with seating for five. There is no mention of single cabs, extra cabs or cab chassis versions at time of writing.

Amongst the available options for the F-150 Lightning will be Ford’s Blue Cruise hands-free driving technology that is usable on more than 130,000 miles of highways in the US and Canada.

To adapt to the expansion of this network, along with other in-vehicle tech improvements, over-the-air software updates, called Ford Power Ups, will be available, managed by Ford’s Sync 4A infotainment system.

The F-150 Lightning is the first vehicle to receive what is the newest version of this system, with data accessible via a 12-inch instrument screen or central touchscreen of up to 15.5-inch size.

By early May, even before the first units of the F-150 Lightning for the US market had been delivered, Ford announced that it had sold out, with no more orders taken for the 2022 model year.

As a bonus for those who pre-ordered, units with the standard battery pack have had power boosted to 452hp (337kW), while the extended-range battery now offers 580hp (432kW); increases of six per cent and three per cent over the originally quoted figures. Torque is unchanged.

American market pricing starts at just under US$40,000, but there’s no word on whether Ford will offer the F-150 Lightning in Australia, despite confirming back in March that the combustion engine F-150 will be coming to Australia as a factory-backed vehicle in 2023.