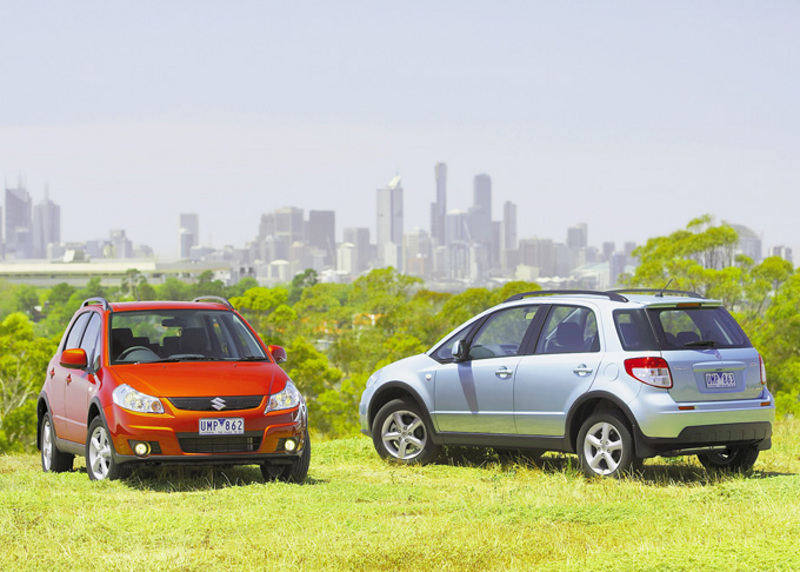 The SX4 is a stylish compact, with versatile driving capabilities, which gives the owner the flexibility and capabilities of a 4WD with the benefits of a fuel efficient passenger car. Built in Japan, the Suzuki SX4 is equipped with a 2.0-litre, four cylinder engine, (1.6-litre petrol and diesel is offered in other markets) offering buyers a maximum output of 107kW at 5,800rpm. Available in Australia in a five door hatch back manual and automatic transmission, the SX4 AWD is pr iced from $24,390. Its only direct AWD competitor is the Subaru Impreza 2.0i, which is just $400 cheaper. The SX4 continues the recent trend of European inspired styling. The vehicle's smooth exterior lines and bold front face provide a sense of stability and solidness far beyond the catalogue dimension of the SX4.

The inclusion of roof rails adds functionality to the vehicle whilst the protective wheel arch mouldings suggest all round season performance. The body is relatively wide at 1,755mm with a wheelbase of 2,500mm. The vehicle features a low rising waistline and large, triangular shaped windows forward of the front doors, giving the SX4 a sporty wedge shape indicative of its superior dynamic performance. The SX4 has a ground clearance of 200mm. From the outset the SX4 was engineered to be 4x4 capable. The signature feature of the SX4 is the i-AWD (intelligent All Wheel Drive) system, a switchable three mode 4x4 system (2WD, 4WD Auto and 4WD Lock) that delivers all wheel traction more than adequate to suit the varied traffic situations and weather conditions faced by Australian motorists.

Suzuki SX4 driving modes are:
2WD - Only the front wheels provide the drive in this mode, which is the most economical setting. The 2WD drive mode is ideal for driving conditions on dry surfaces.
4WD Auto - The standard mode for driving, almost all the torque is distributed to the front wheels. Torque going to the rear is automatically increased or decreased to match traction requirements in variable conditions such as when driving on slippery surfaces.
4WD Lock - Lock mode provides ample torque to rear wheels from start up for effective escapes in low traction conditions such as mud or snow. The system automatically switches over to, and remains in 4WD Auto at speeds over 60 km/h.
The "intelligent" 4WD controller constantly monitors driving conditions in order to deliver the most efficient division of power.

The key delivery component is the EMCD, an electronically controlled wet-type multi-plate clutch coupling, in which the degree of magnetic clutch action is modulated to match traction. The coupling is regulated with an electrical current alternating between the two and four wheel drive modes, and a simple rocker switch is mounted at the centre console enabling simple operation of the i-AWD system for the driver. The front suspension structure of the SX4 is similar to that of the Suzuki Swift, in that it is mounted on a high tensile steel suspension frame, to reduce noise and vibration transfer to the cabin. An independent MacPherson strut front suspension is teamed with a highly rigid torsion beam set up in the rear to provide responsive linear handling and stable cornering performance. The SX4 is equipped with Suzuki's J20A engine, used in previous Suzuki models. The engine has been subjected to extensive development and is now equipped with Suzuki's Intake Manifold Tuning system delivering greater power across a broader rev range. Utilising this system, the power has been increased from a base of 96kW @6,000rpm to 107kW @5,800rpm.

Clever use of the interior space realises reasonable people and luggage carrying flexibility, usually only found in larger vehicles. With all seats in use the compact SX4 has a generous capacity of 270 litres, tall enough to allow a large suitcase to be loaded vertically. The capacity increases to 625 litres when the seats are tumbled forward. Several storage spaces for small, personal items are located around the cabin, including a compartment in the instrument panel, glove box, front and rear cup holders, seatback pocket, front door pockets and a tray under the front passenger seat.

Safety
The vehicle is equipped with six airbags comprising of two front, two side and two curtain bags. To ensure that deployment is necessary, system control incorporates front and side impact sensors in addition to the main module. ABS with electronic brake force distribution (EBD) ensures the vehicle will respond to the driver's every command whilst the agile suspension contributes to the driving dynamics of the SX4. Additionally, the front three point ELR seatbelts include pre-tensioners and force limiters with two of the rear seat belts featuring A-ELR.

All seating positions are equipped with 3 point ELR seat belts and adjustable head restraints to maximise collision safety. The safety features in place for occupant protection were recently recognised with the SX4 receiving a EURO NCAP rating of 4 stars. The Suzuki SX4 is now on sale and is available in a manual transmission from $24,390, while automatic transmission is an additional $2,000. 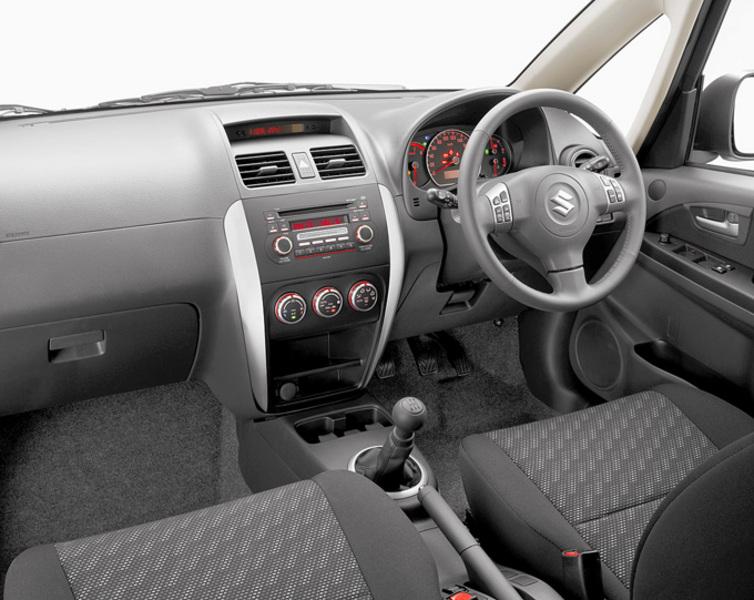 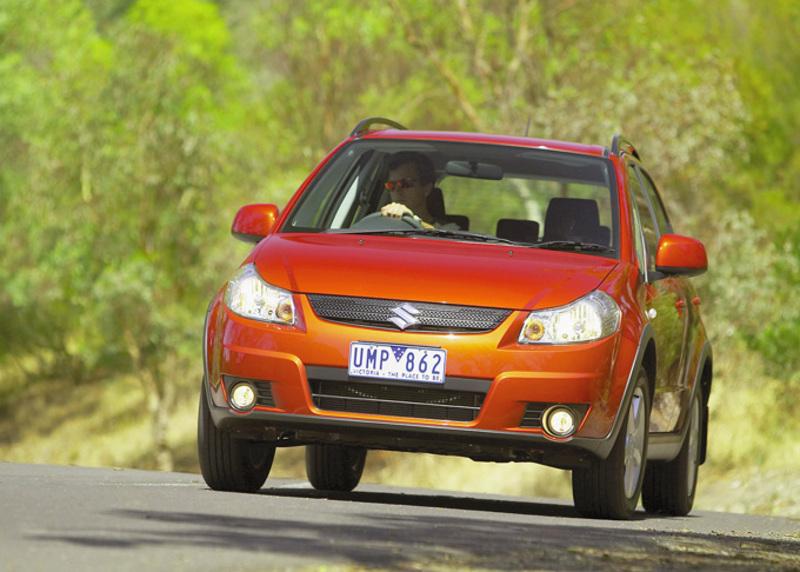 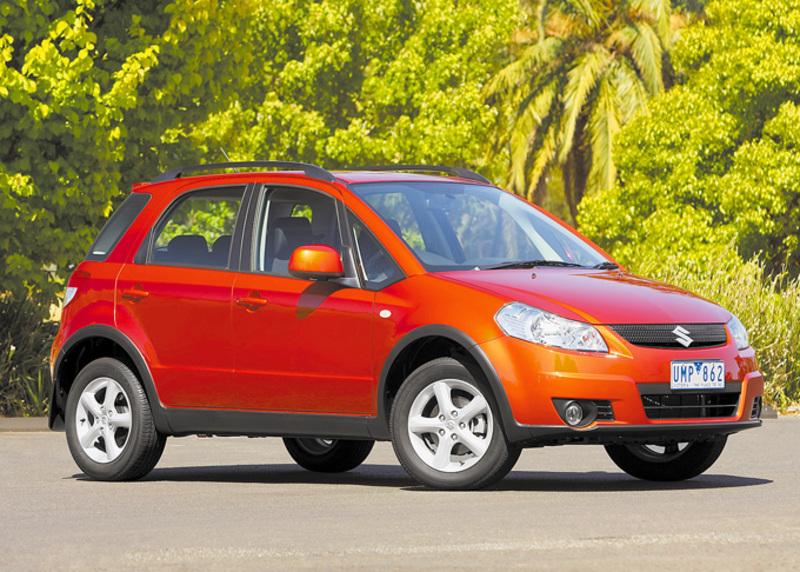