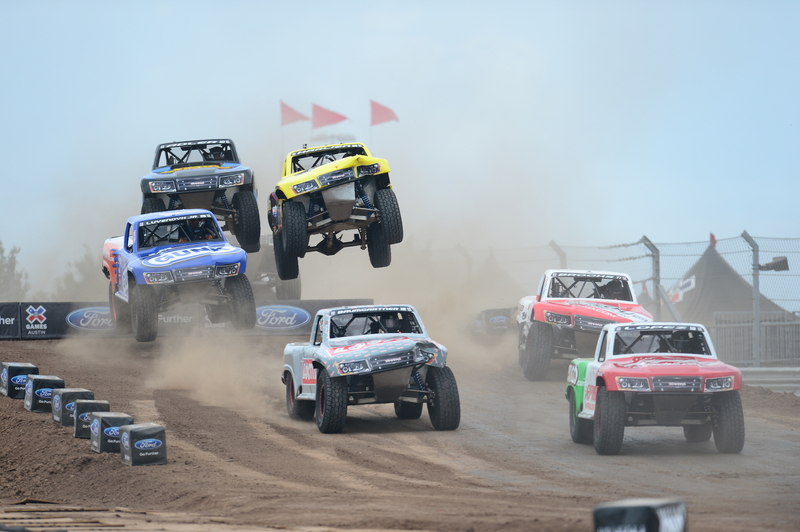 The series, which is the first to be held outside of North America, will kick off with street/ramp races at the Castrol Gold Coast 600 V8 Supercar event at Surfers Paradise on October 23 to 25 and conclude with a spectacular stadium event at Sydney's Spotless Stadium on October 31.
Each race will include 10 trucks from Robby Gordon's stable, which are set to be piloted by a mixture of US and Australian drivers, who will be confirmed in the coming weeks.
Created by former IndyCar, NASCAR and off-road legend, Robby Gordon, the Stadium Super Trucks were a massive crowd favourite when they made their Aussie debut on the street course at this year's Clipsal 500 V8 Supercar event in Adelaide.
"We had a hell of a time at the Clipsal 500 in March and we were delighted with the way the Aussie fans embraced our spectacular trucks," said Gordon.
"We have no shortage of US or Australian drivers wanting to be involved in this two-event series so the quality is going to be outstanding.
"While the Australian fans have seen how spectacular our trucks can be on the ramps on a street track, they are in for a special treat with our stand alone stadium event at Spotless Stadium, Sydney Showgrounds. It's going to be crazy."
Purpose-built machines with 600 horsepower, Stadium Super Trucks are capable of reaching speeds in excess of 200kph.Even more impressive is their unique suspension, which allows them to jump almost 10 metres in the air and much further than that in distance.
October's two-round Stadium Super Trucks series will also be supported by a range of action sports activities, where local riders and drivers will perform on a world stage.
Tickets for the Stadium Super Trucks event at Spotless Stadium, Sydney Showgrounds on Saturday, October 31, will go on sale to the public on Thursday, August 13, at 9am throughticketek.com.au
Ticket prices range from $59 to $129.
More details at:www.facebook.com/StadiumSuperTrucksAU
Advertisment
Advertisment