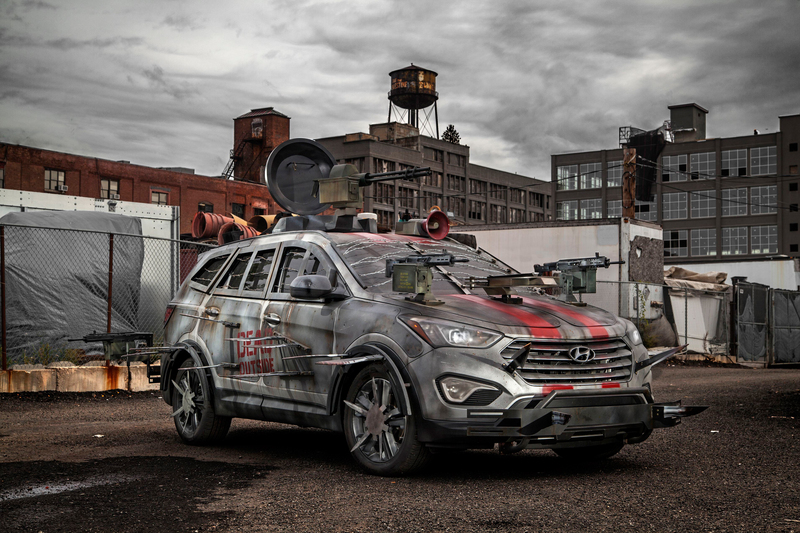 More than 82,500 fans submitted their take on what would be the ultimate Zombie Survival Machine to The Walking Dead Chop Shop configurator app.
Successful comics and graphic novels usually create a raft of spin-off products, memorabilia and even TV shows and movies. But at this year's New York Comic Con event, Hyundai unveiled a bit of tie-in merchandise with a difference in the form of a "Zombie Survival Machine" based on a current generation Santa Fe.

As a tie-in to the popular 'The Walking Dead' graphic novel from Image Comics (of which Hyundai is a partner) and TV Series, more than 82,500 fans submitted their take on what would be the ultimate Zombie Survival Machine to The Walking Dead Chop Shop configurator app.

The winning entry came from Anson Kuo, who based his creation on the brand-new 2013 Hyundai Santa Fe Sport he purchased. Brought to life by Galpin Auto Sports (GAS), Kuo's creation was revealed on the New York Comic Con floor at the Future US booth in the Javits Center.

"My main design goal was to make the vehicle as stealthy and spacious as possible," said Kuo. "I knew knives and blades would be the best bet for weaponry - they could slice and dice the zombies without releasing any ammunition.

"Basing the design on the Santa Fe allows space for extra passengers as well as weapons, supplies and all the other necessary items needed during a real zombie apocalypse."

Limited edition prints exclusive to the gallery were distributed to gallery guests each day. The gallery also hosted a private screening of the world premiere of the "Hyundai presents The Walking Dead a Decade of Dead" documentary.

"We were excited to see Anson's Zombie Survival Machine debut at New York Comic-Con," said Robert Kirkman. "This was a great addition to the celebration of the 10th Anniversary of The Walking Dead."