Going Rogue. The most ‘accessory pack’ of the three new HiLux variants, Rogue is intended for urban adventurers, but should you give it a second look? 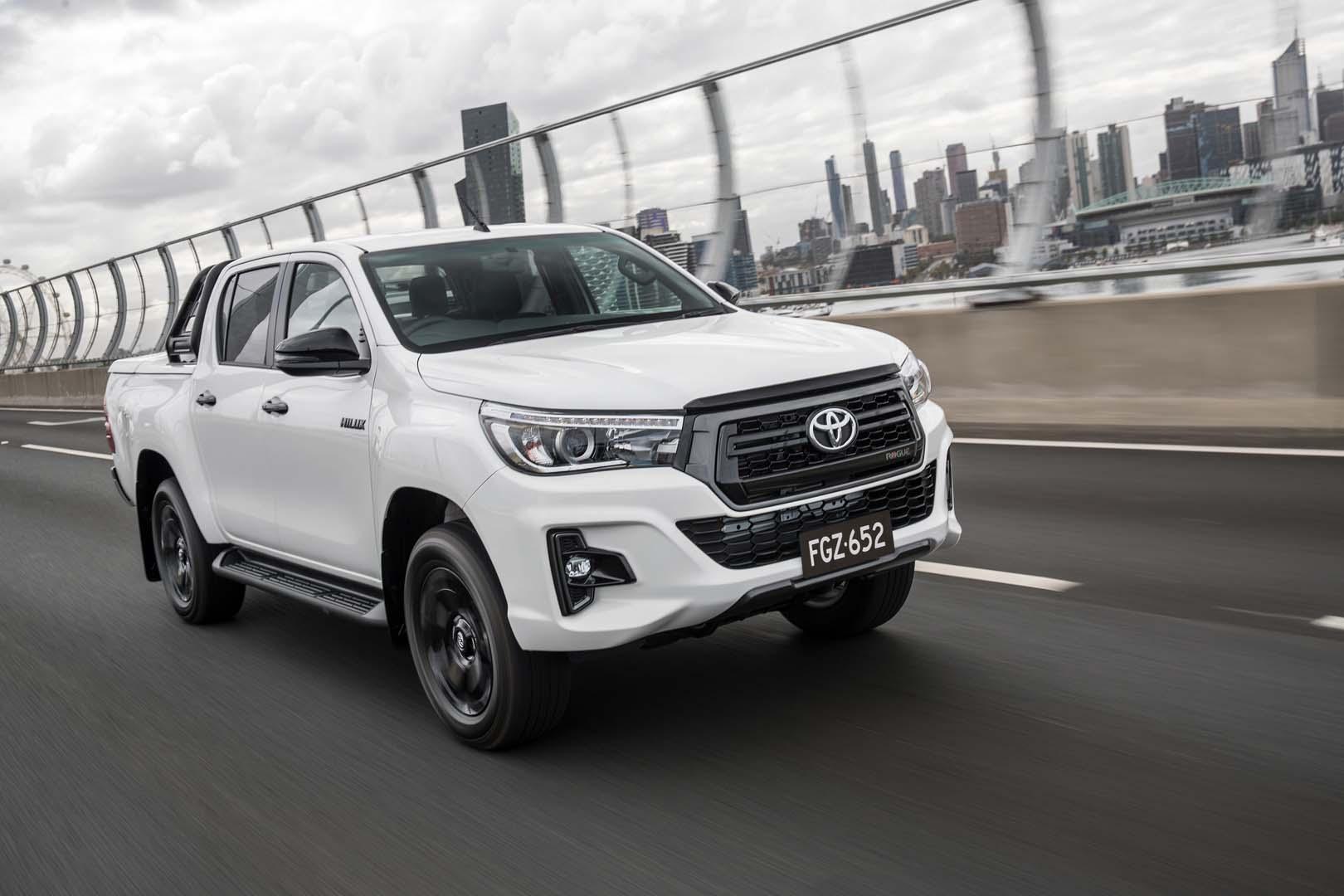 Intended for “urban adventurers” (whatever that means) the Toyota HiLux Rogue is the least ‘enhanced’ of the three HiLux variants released late last year. The Rogue, Rugged and Rugged X are Toyota’s response to the arrival of high-performance oriented dual-cab utes onto the market and indeed the market’s growing appetite for dual-cab utes as family-first vehicles.

The Rogue, Rugged and Rugged X were designed and developed in Australia, indeed they’re also put together in Australia. Toyota Australia grabs the donor vehicles off the line in Thailand and brings them into Australia and adds all the bits and bobs here. 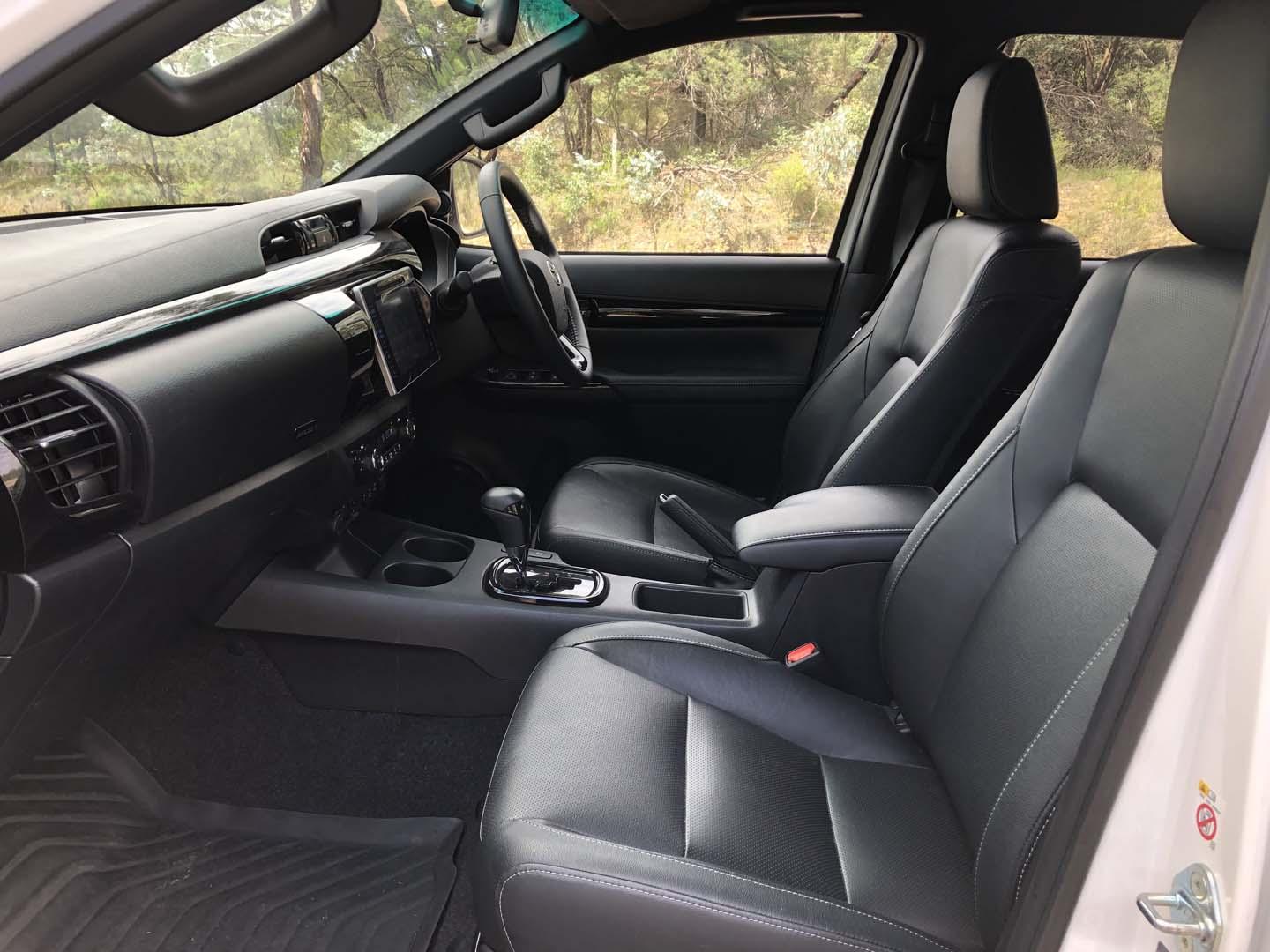 What’s the price and what do you get?

There are three variants, as mentioned, but we’ll focus on the Rogue in this review but, if you want to read more about the rest of the range then click HERE to read our launch review. So, the Rogue is the most ‘accessory pack’ of the three variants.

Based on the HiLux SR5 ($56,440+ORC), the Rogue adds $5550 worth of accessories and bumps the price to $61,990+ORC; Toyota expects about a third of those buying the three variants to buy the Rogue. Hmmm. The Rugged is cheaper being based on the SR, and it gets more ‘useful’ gear for going off-road. For me, straight off the bat, it’s the more sensible choice. Moving on.

The Rogue is an automatic-only model, the other variants offer both manual and automatic transmission options, and is the only one of the three that is being offered in markets beyond Australia. So, what does the extra coin get you? It features a revised front bumper and grille, and additional equipment over HiLux SR5 includes a grey rear bumper with wider step, tow bar, load-rated sports bar, hard tonneau cover with integrated light, tailgate dust-sealing kit, marine-grade carpet tub liner, 18-inch ‘Rogue’ alloy wheels, and the same interior features and trim as the Rugged X.

While key competitors have gone for performance, Toyota reckons it opted to go down the accessories route because that’s what its customers do when they leave the dealership. It wanted to shortcut that process, claiming that the average HiLux buyer spends around $2000 on accessories. 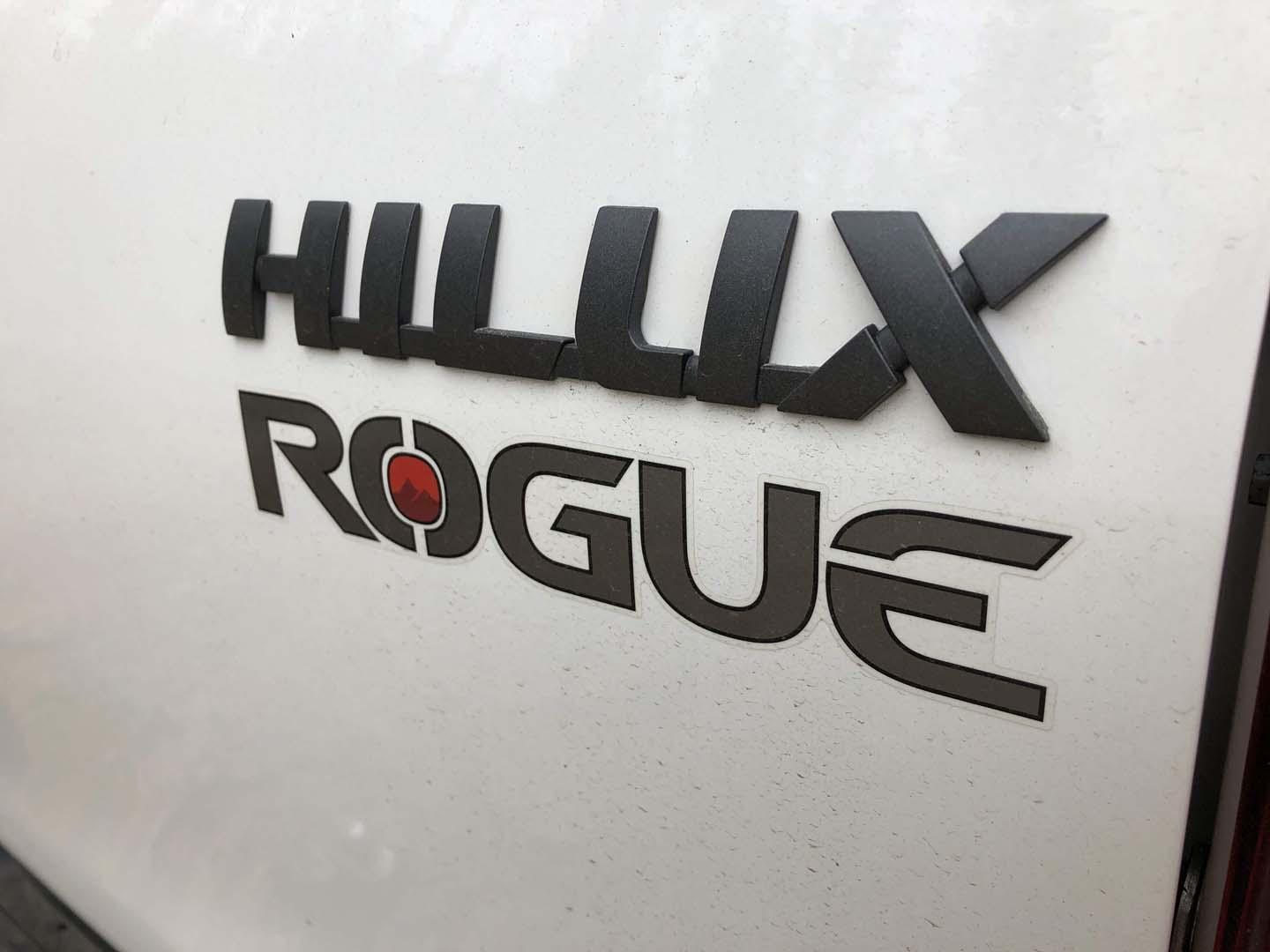 Think HiLux SR5 just with some added bits of shiny, metallic black plastic. There are leather accented seats, and a tweaked instrument cluster as well as a black headlining and heavy-duty rubber floor mats. The Rogue and the Rugged X are identical on the inside being based on the SR5 and carries the same interior tweaks. The Rugged is based on the SR.

In terms of storage, there’s a decent amount. There’s somewhere for your phone behind the transmission lever and forward of it there are twin cupholders. That said, if you’re stashing bottles in them then they’ll block access to things like the USB outlet to connect your phone and even some of the off-road controls, like the hill-descent control on/off switch. The door bins are a decent size and they’ll hold a 500ml water bottle easily. And there’s a double-decker glove box with a small upper section and a larger lower section.

So, what of the tweaked dashboard. Well, it makes a different. A slight one, anyway. The Rogue’s interior feels nicer than that of the SR5 but beyond the lifted appearance thanks to the shiny black plastic trim, the plastics are still hard and scratchy feeling. That’s great for longevity, you’d imagine, but the plastics on the inside of the HiLux seem to hold dust and grit like nothing else I’ve seen. And I think it’s this area that really lets down the interior of the HiLux.

Because, look beyond the grubbiness and there are plenty of creature comforts like heated seats and climate control, and more. As they are in the SR5 the seats are comfortable but broad and flat in the base, lacking support in the seat base and back. You don’t notice this too much on the road but once you start bumping about off-road, well, you do. 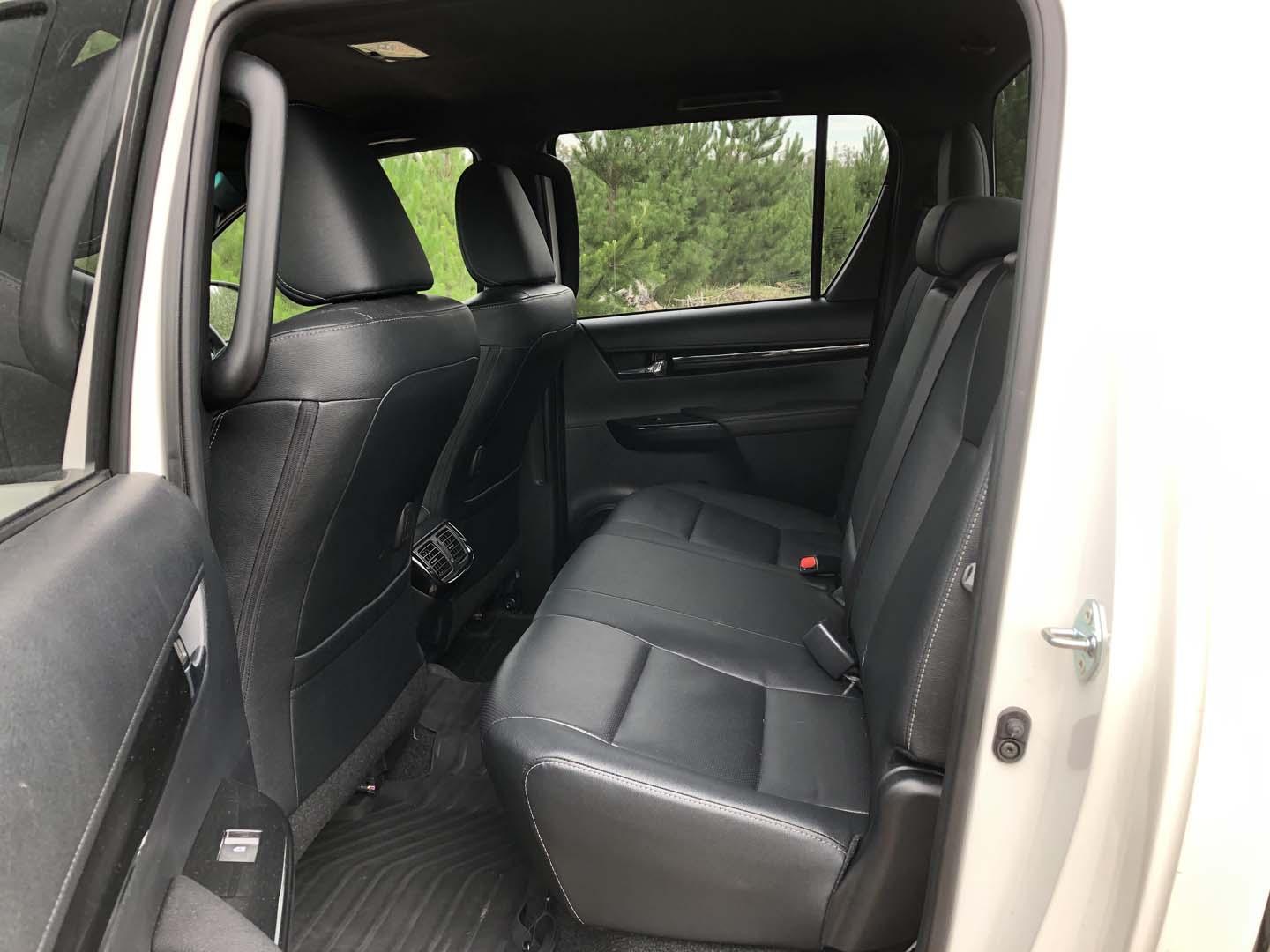 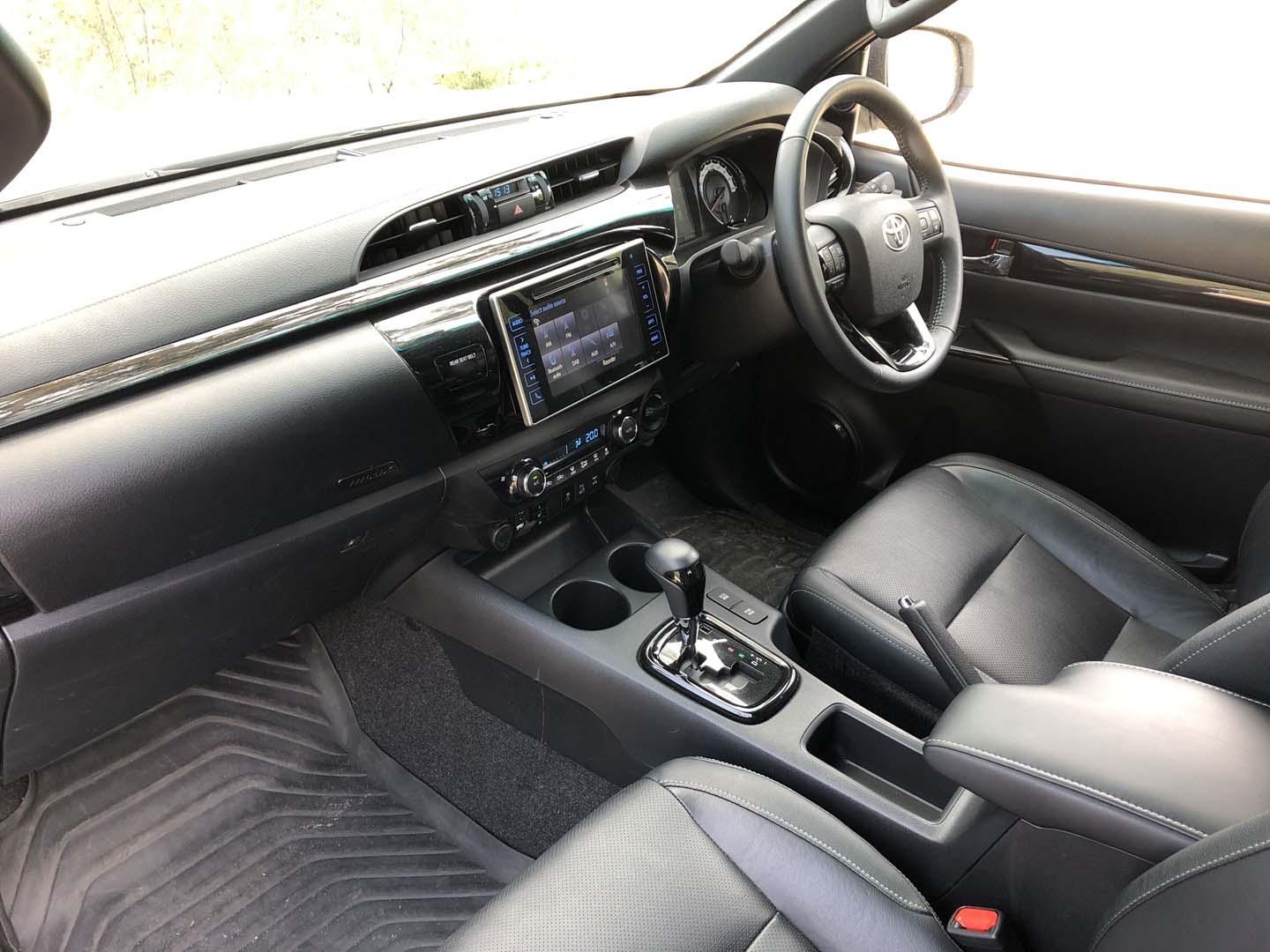 Personally, I found the scuff plates to be slippery on the way in through the doors and the running boards aren’t particularly useful either. Kids, my kids anyway, found them tricky to use and, my daughter, who’s taller than average for her age, slipped more than once while trying to climb in; and getting out was like watching someone ready for a parachute jump. There are ISOFIX mounts for the two outboard seats.

The back seat is comfortable, like the front seat, and there’s enough lean on the backrest that you don’t feel like you’re sitting up against a wall (unless you’re sat in the middle which is too-upright). There are directional rear air-con vents and a fold-down centre armrest if you’re not using the middle seat. The bottom of the seat can also be folded up against the backrest if you need some storage space in the cabin and no-one’s using the back seat.

The main talking point for the Rogue is really its lockable tonneau cover and carpeted tray. Personally, I think this thing is aimed at those with boats who might need to throw wet gear into the back of the ute with the marine-grade carpet better for that than either no liner or a rubber or spray-in liner. It’s stuck down with Velcro and so can be removed if it gets wet.

Toyota spent a lot on the accessories but I reckon it missed one crucial item and that is an assist for the tailgate. The thing weighs a tonne and once it’s unlatched it’ll just drop if you’re not prepared for the weight. If you’re going to be loading and unloading the tray regularly then a support is a must. The Rogue gets a wider rear bumper with integrated step and a towbar too.

The Rogue adds roof racks to the package and while roof racks are always handy they make a hell of a racket when you’re driving at highway speed. So much so that I thought a window was down. The rated sports bar is handy but for it to be of any real use on the Rogue you’d probably need to remove the tonneau cover. Hmmm. 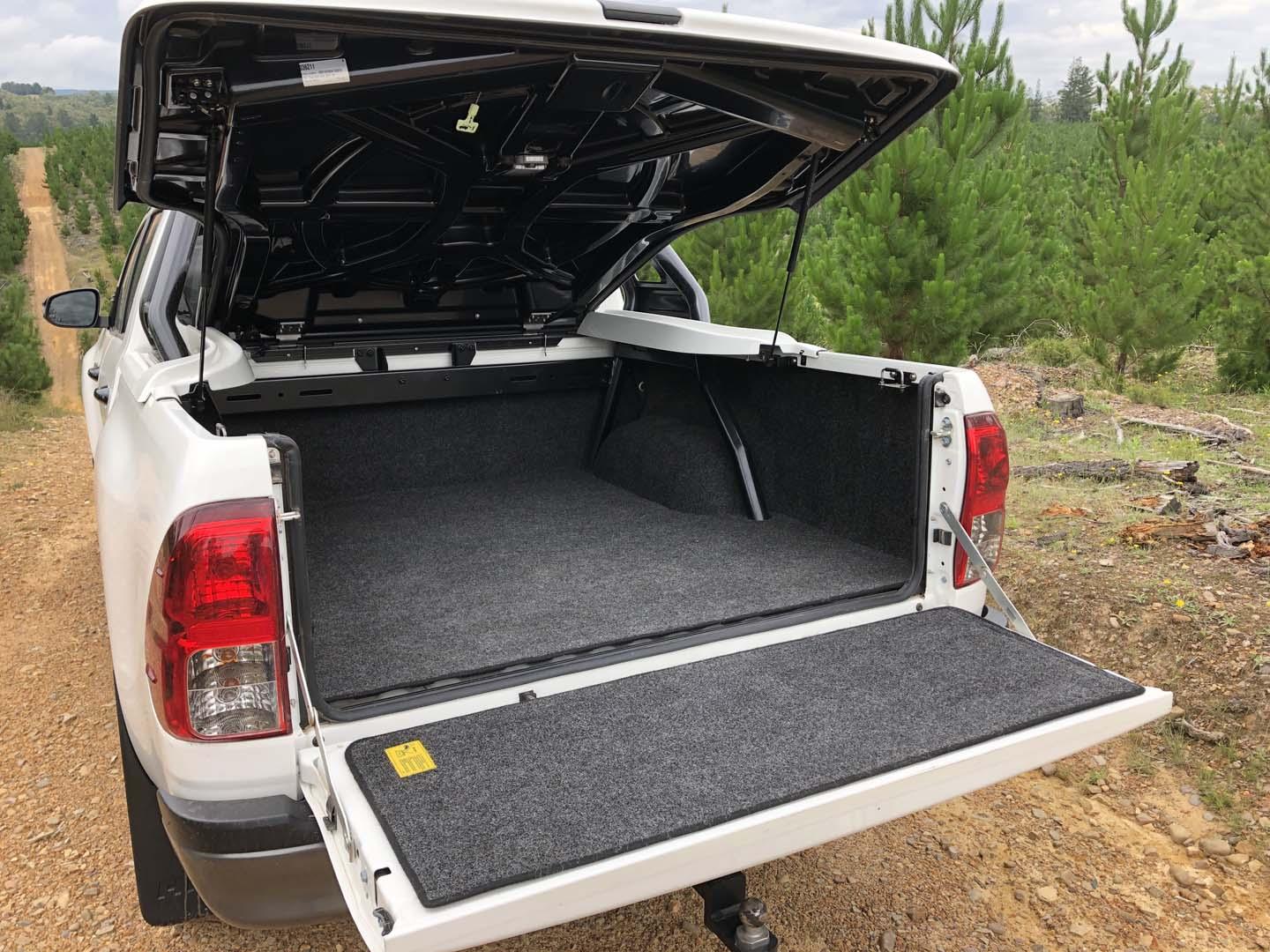 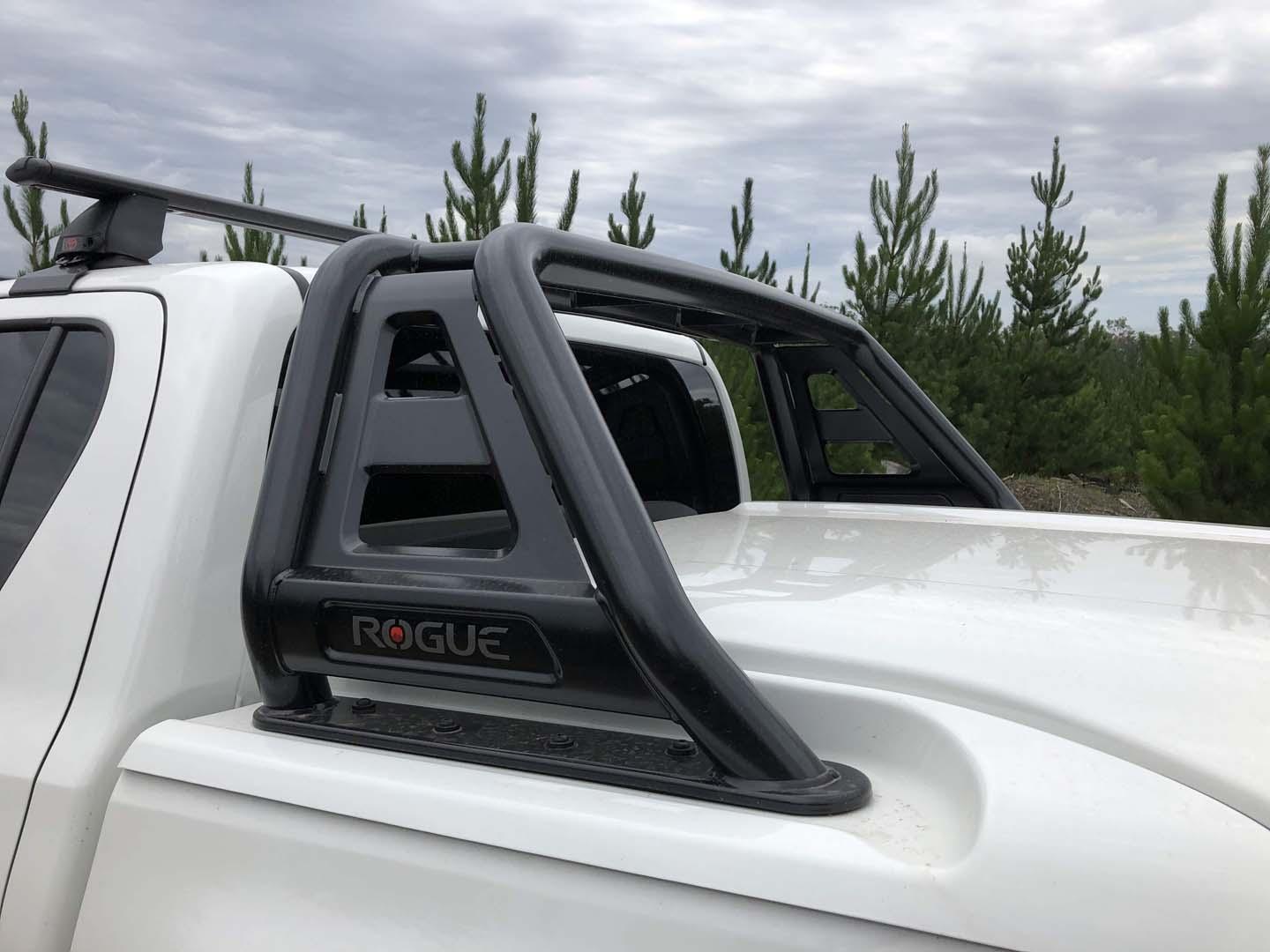 Mechanically, the three variants are identical to their donor vehicles. Remember, the HiLux variants are about accessories and not performance, not as far as the engine is concerned anyway. This means you get a 2.8-litre four-cylinder turbocharged diesel engine making 130kW at 3400rpm and 450Nm of torque from 1600-2400rpm (the manual equipped HiLux make less torque).

The engine isn’t overly refined and nor is the six-speed automatic transmission it’s mated to. There’s enough grunt to keep up with traffic but accelerating in a hurry isn’t one of the HiLux’s strengths. The transmission doesn’t help much because it feels clumsy at low speeds and I found when driving slowly off-road it would occasionally lurch to a higher gear.

But then the lack of throttle progression is as much to blame. Bumping around off-road can see your foot bouncing on the throttle causing the thing to lurch. And this lack of progression can occasionally see you, even when used to the throttle, applying too much causing the HiLux to try and bound ahead and break traction. 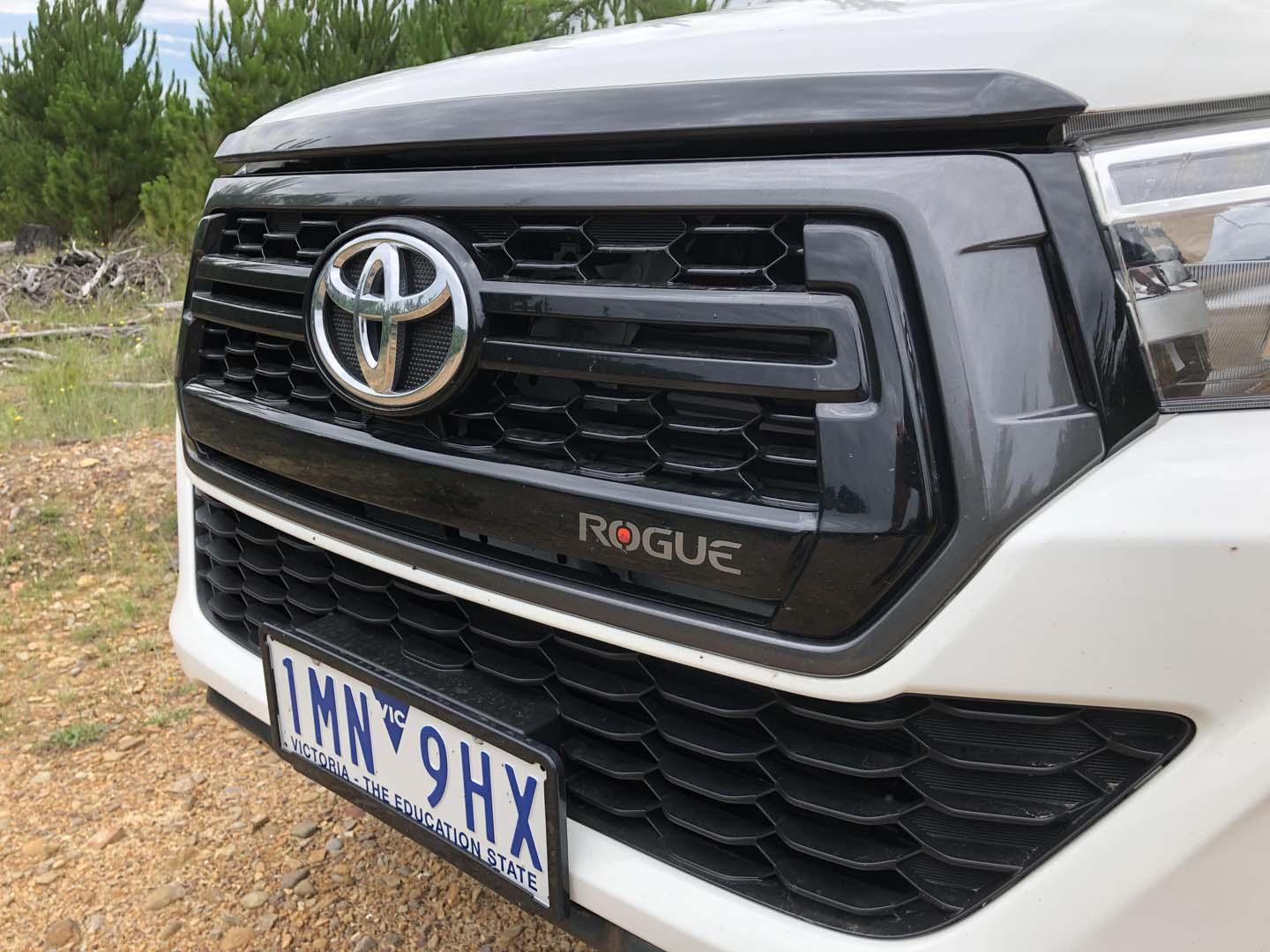 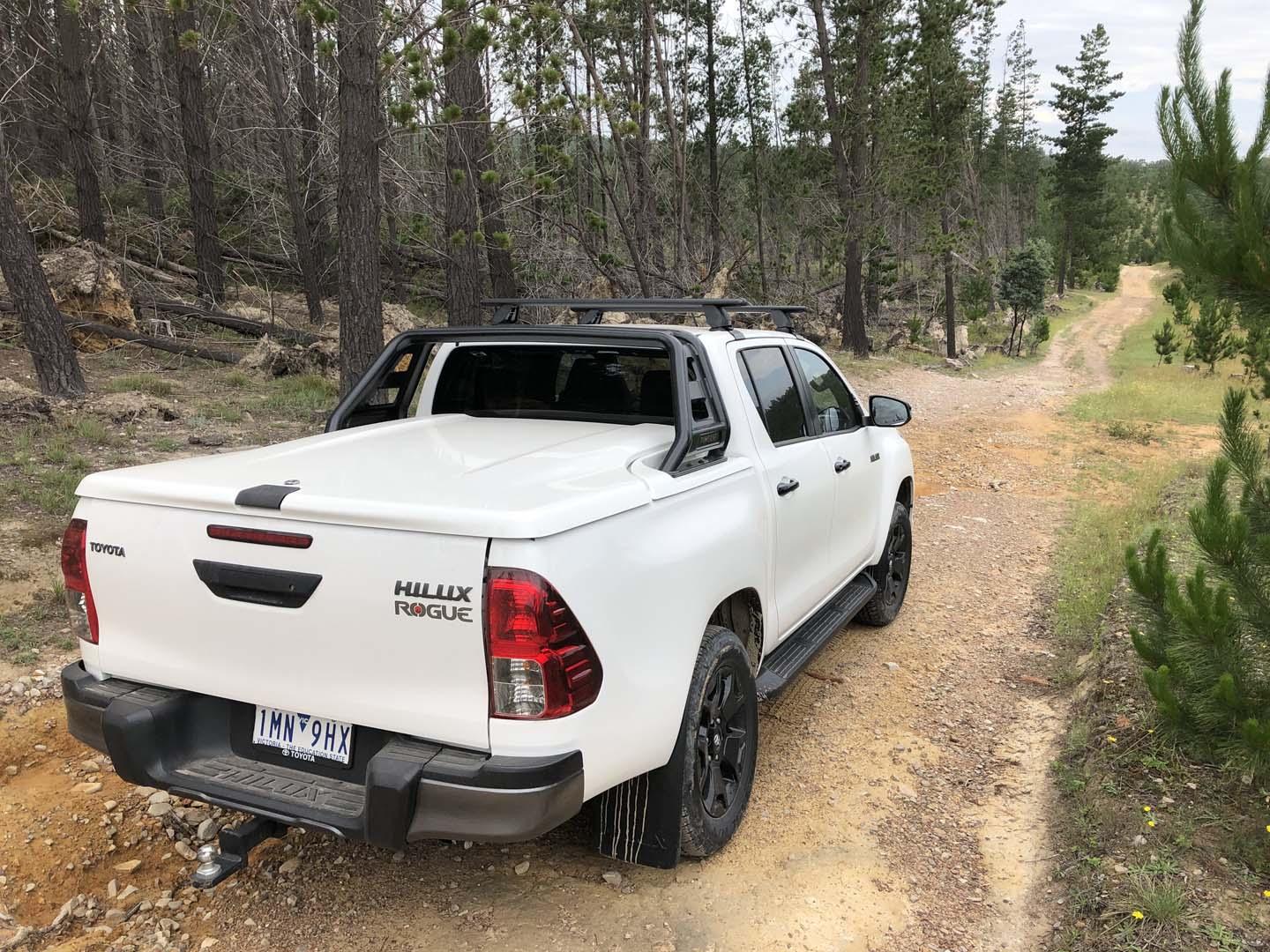 We’ve discussed the Rogue’s engine, transmission and lack of throttle progression but then that’s the same complaint we have with the HiLux. And it’s the same for the ride.

On the highway, there’s a constant jiggle through the Rogue, hit a bump and the front-end can feel floaty while the back-end can buck. But, hey, unladen utes are like that…in the back-end at least.

And the steering doesn’t help either. There’s a total lack of feel or directness to the wheel’s action; the best way to describe it is, ponderous. But then, ahain, these are criticisms that can be levelled at the HiLux in general.

Body control through corners is okay but the HiLux isn’t one of the sharpest handlers in the segment and that’s down to the clumsiness of some of its controls. 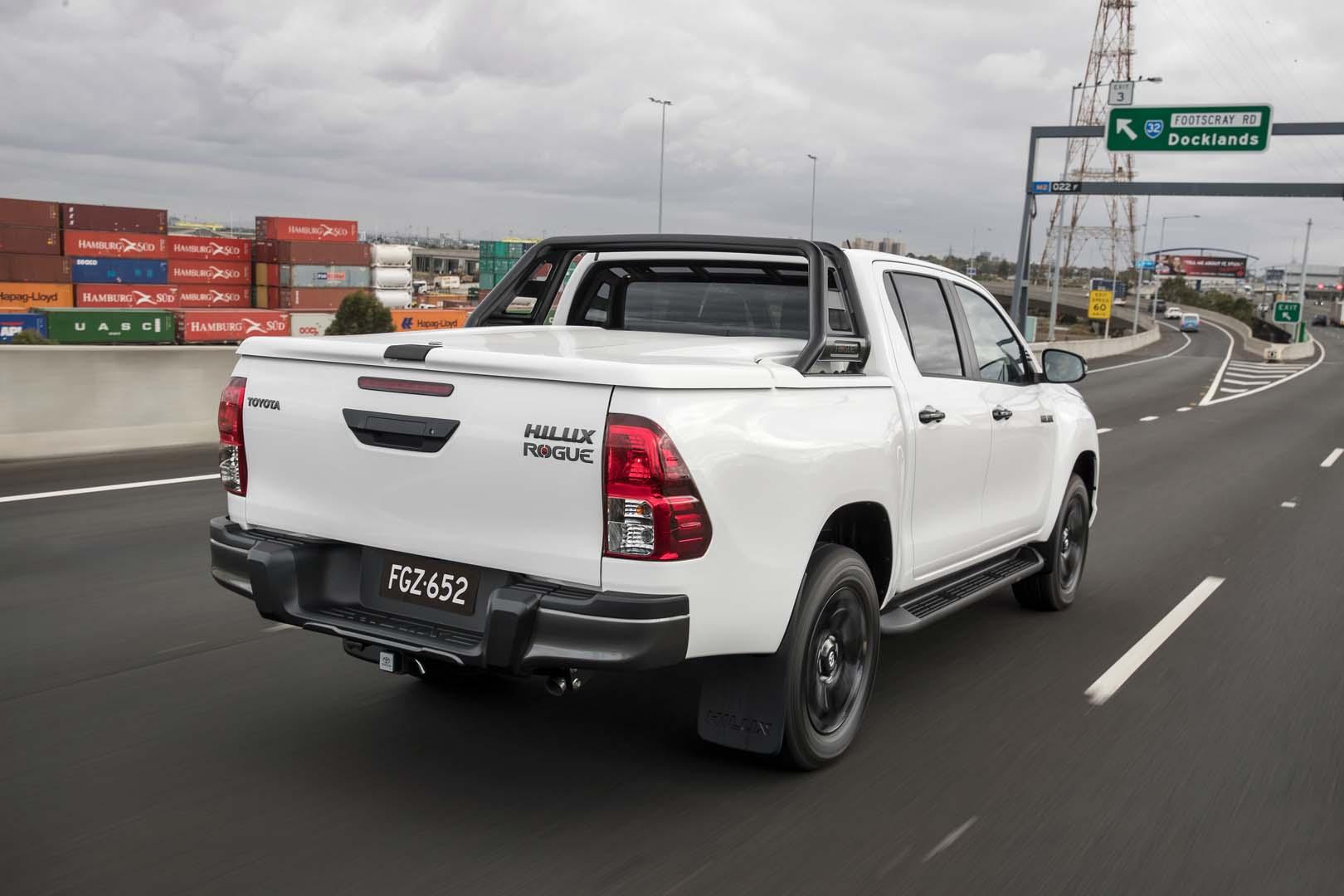 Well, it’s a HiLux so you know what to expect. The Rugged and Rugged X are designed for those who want to go bush and get things like rock rails that bolt directly to the chassis and are designed to take a real beating. You get plastic running boards on the Rogue.

The manual-equipped variants are better off-road than the auto-equipped Rogue because of the clumsy automatic transmission. It lacks finesse for low-speed manoeuvring.

But, there’s so-so ground clearance (a measured 210mm to the bottom of the diff pumpkin) and okay wheel travel and the traction controls work well. The Hill Descent control is good and is adjusted via the cruise control.

As far as this package goes, it’s the tyres that let the vehicle down most. They’re road-oriented 265/60 R18 Bridgestone Dueler H/T tyres; you’d be way better off running Continental CrossContact ATRs which have a more aggressive pattern and shoulder sipes for better grip in ruts off-road, and are quieter and grippier on-road.

It was the tyres that frustrated the most off-road. We spent most of the time, as you can see from the video, on gravel and dirt roads with just a little bit of rutted track driving and some culverts for cross-axle performance and it really was the tyres that let the thing down, slipping on sections of track where only a month or two before, in dry conditions, I’d driven a Mazda BT-50 running Continentals and had no such problems. 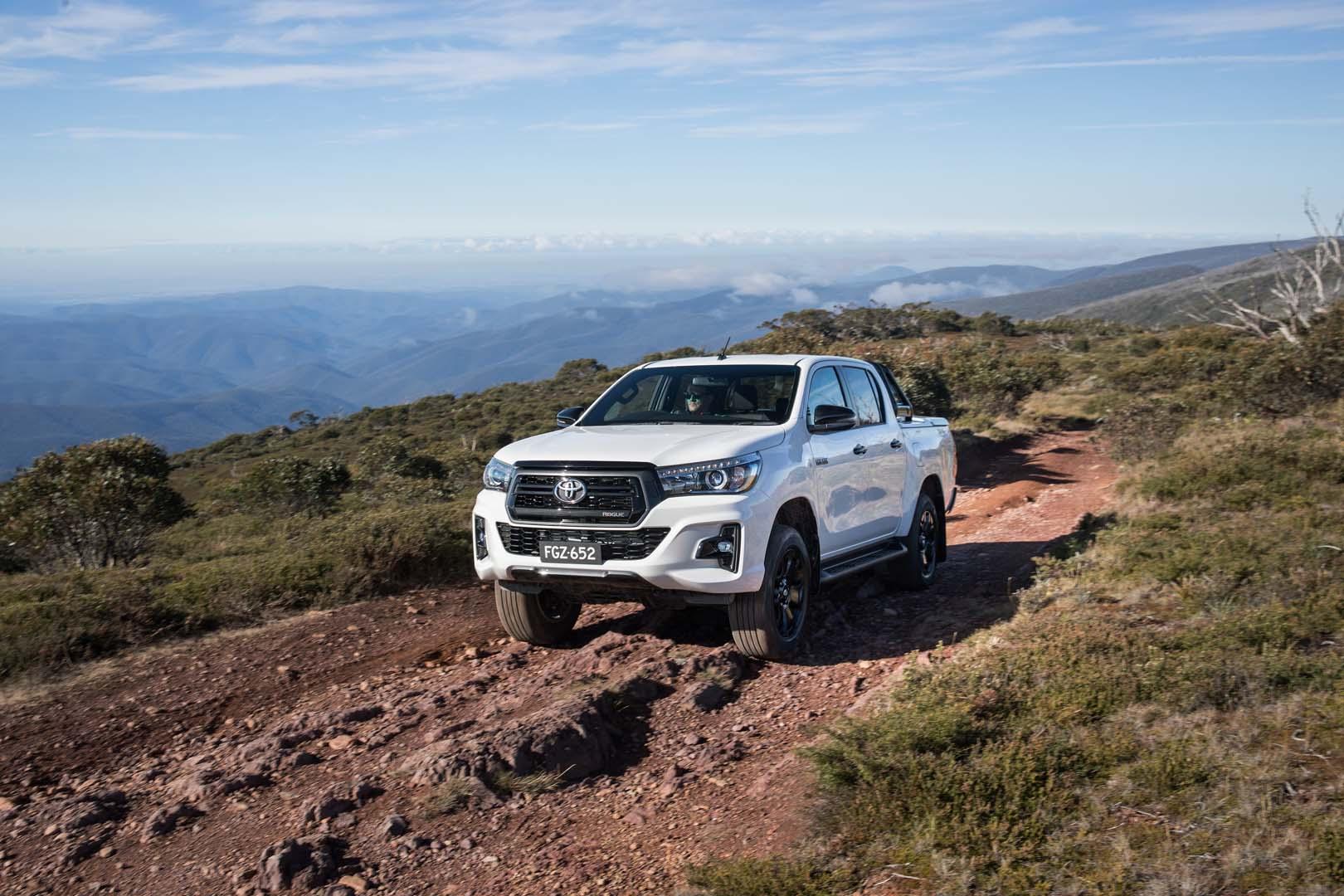 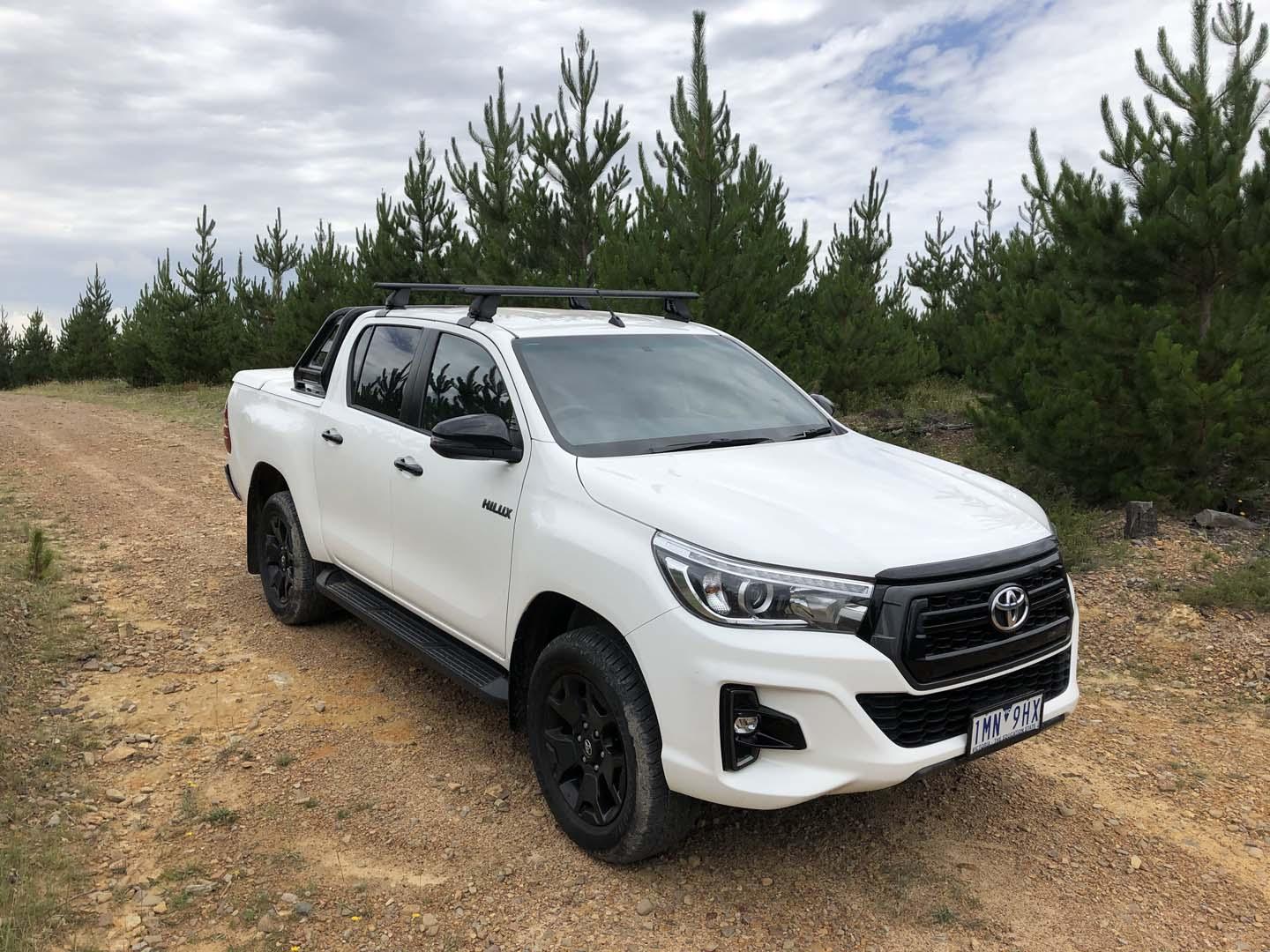 Does it have a spare?

Yes. There’s a full-size alloy underslung but the wider rear bumper and step and towbar can make reaching it a bit of a pain.

Can you tow with it?

Yes. The automatic Rogue will tow up to a maximum braked 3200kg.

Toyota recently announced it was upgrading from its market-lagging three-year warranty to a five-year unlimited kilometre warranty. It also announced that if one of its vehicles was deemed undrivable within the first 60 days then it would be replaced. Toyota offers capped price servicing on the HiLux capped at $240 up to the first six services for three years.

What about safety features?

The HiLux carries over its five-star ANCAP rating from its 2015 test which is a bit sneaky. If it was tested today it would most certainly not achieve a five-star rating and that’s because the HiLux doesn’t offer mandatory (to receive a five-star rating) active safety like autonomous emergency braking.

So, what do we think?

Mechanically the HiLux Rogue is the same as an SR5 and so it carries that model's on-road and off-road foibles. The HiLux does enough to satisfy but it never impresses in one area. The interior's roomy with enough creature comforts to satisfy most buyers but the price tag for a few extras is hard to justify. 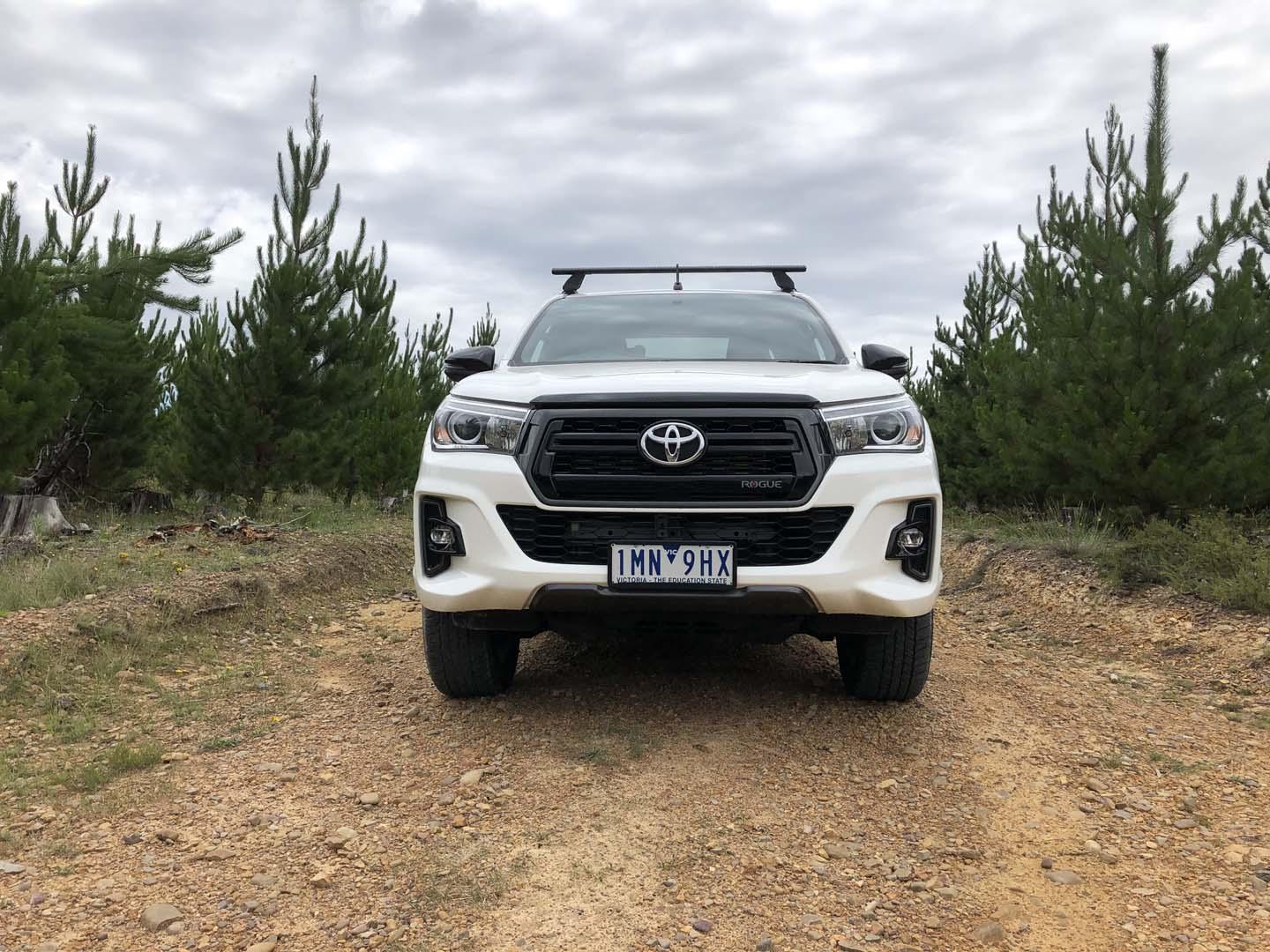 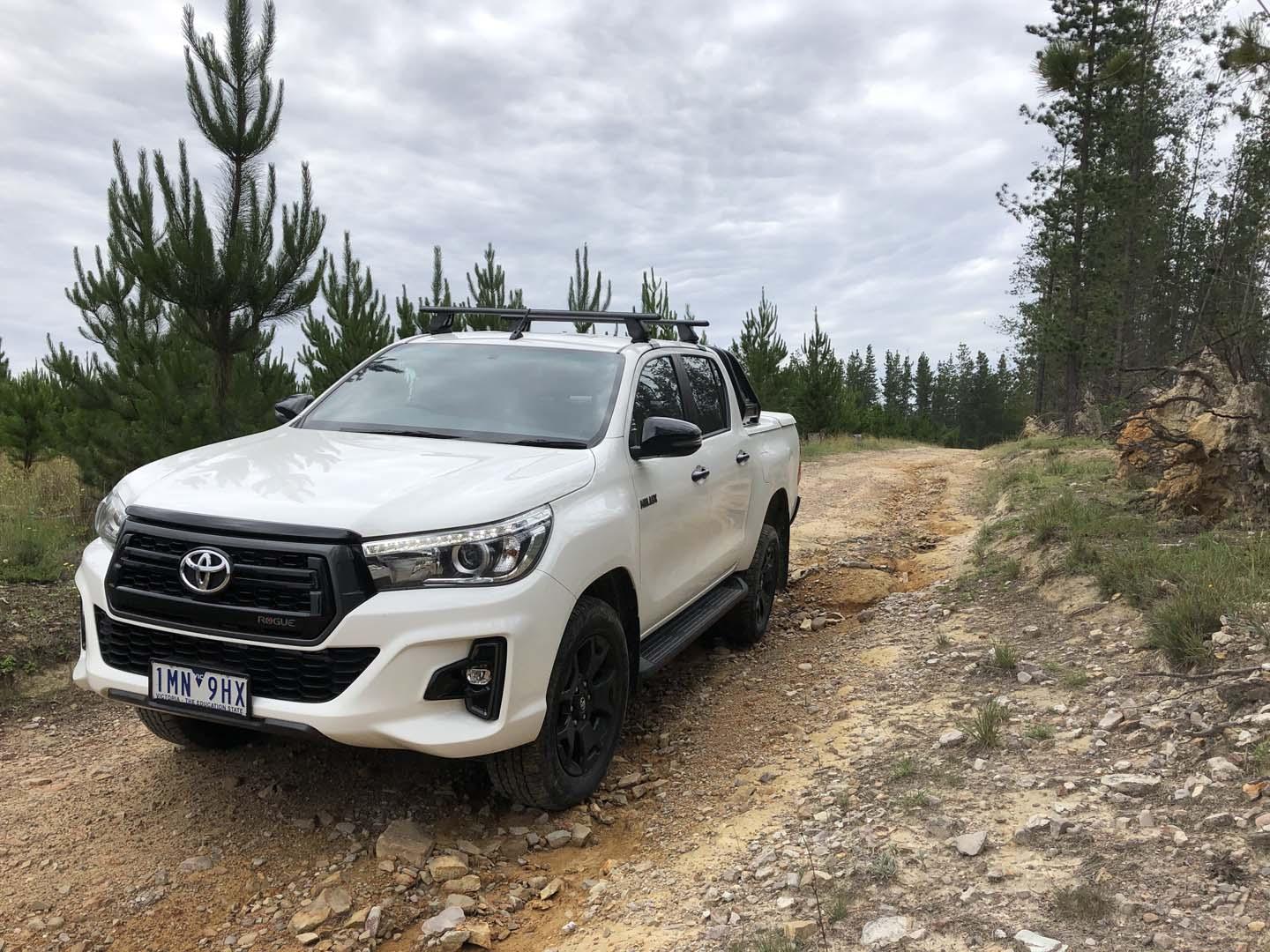