Jeep has introduced its first ever seven-seat Grand Cherokee. It’s packed with luxury and features to justify a higher price, but there’s no diesel engine option and towing capacity is reduced. Will new and existing Jeep buyers accept the compromises?

You can no longer buy one with a diesel engine, towing capacity’s dropped and prices have been considerably hiked. On the face of it, the all-new Jeep Grand Cherokee L should suffer a serious crisis of confidence. 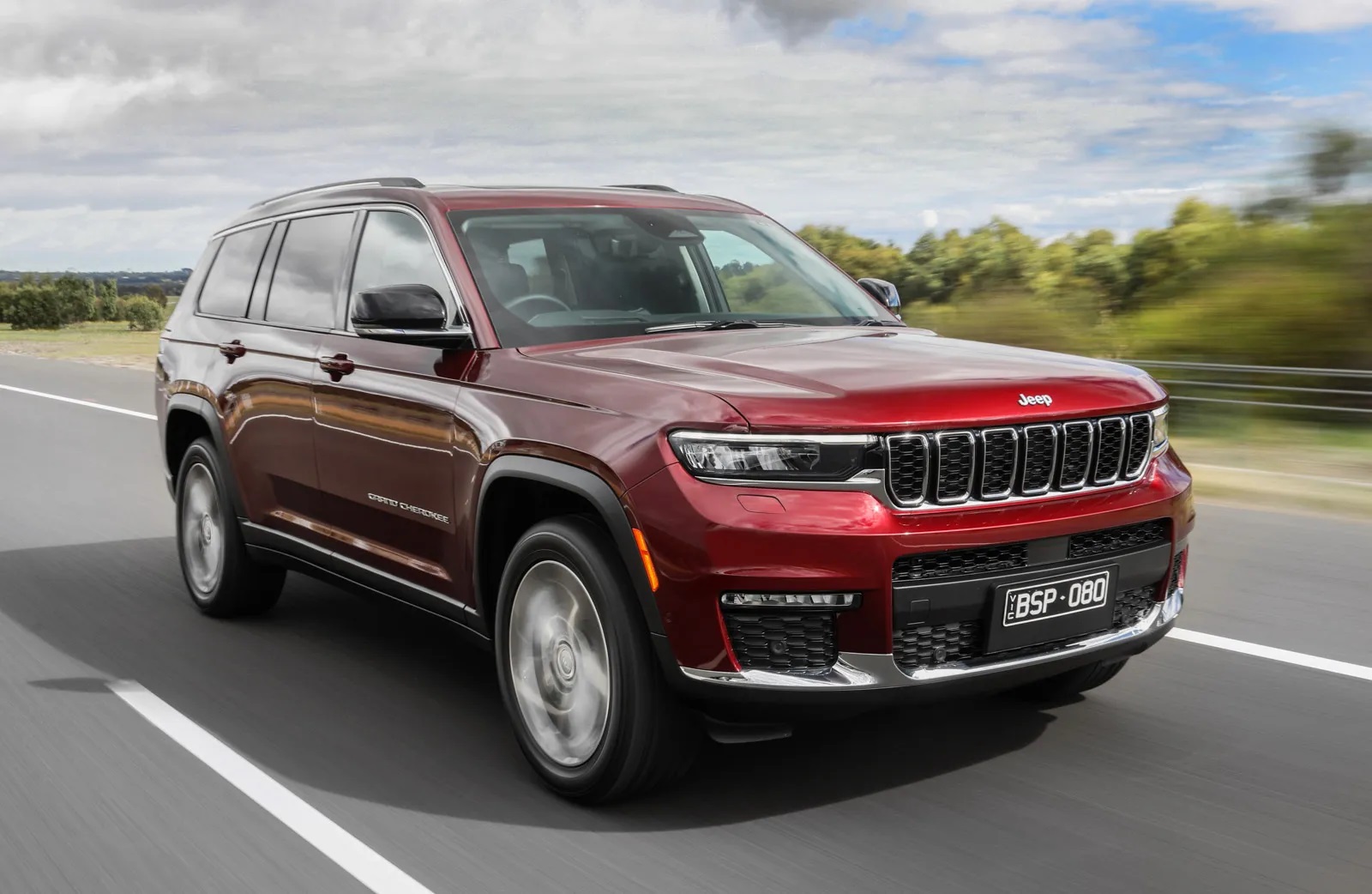 Instead, Jeep’s large SUV flagship has simply pivoted to pastures new, and very successfully, too. For the first time in the nameplate’s history it offers seating for seven (a five-seat version will follow), while the cabin's design, quality and luxury have bounded into genuine premium territory.

Fear not, the Grand Cherokee off-road DNA remains intact, and despite its imposing size – 5.2m versus the old five-seater Grand’s 4.8m – its on-road manners over bitumen rough or smooth proved deeply impressive on our test. 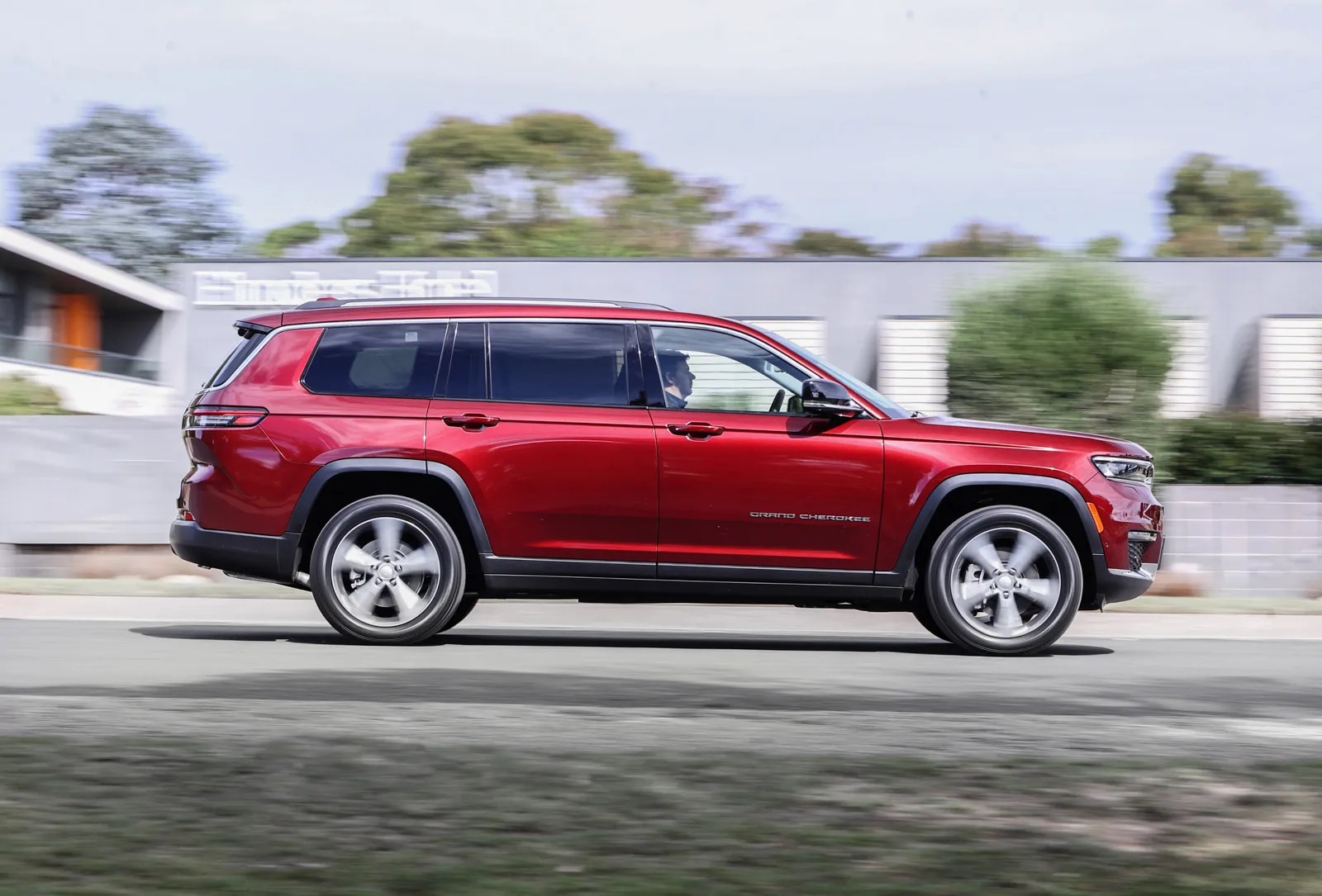 There's no diesel for the GC five-seater, either. A 280kW/637Nm 4xe plug-in hybrid version should appease those after more power and economy, but 2722kg’s your tow limit. No plug-in hybrid is slated for the seven seater, in case you were wondering. 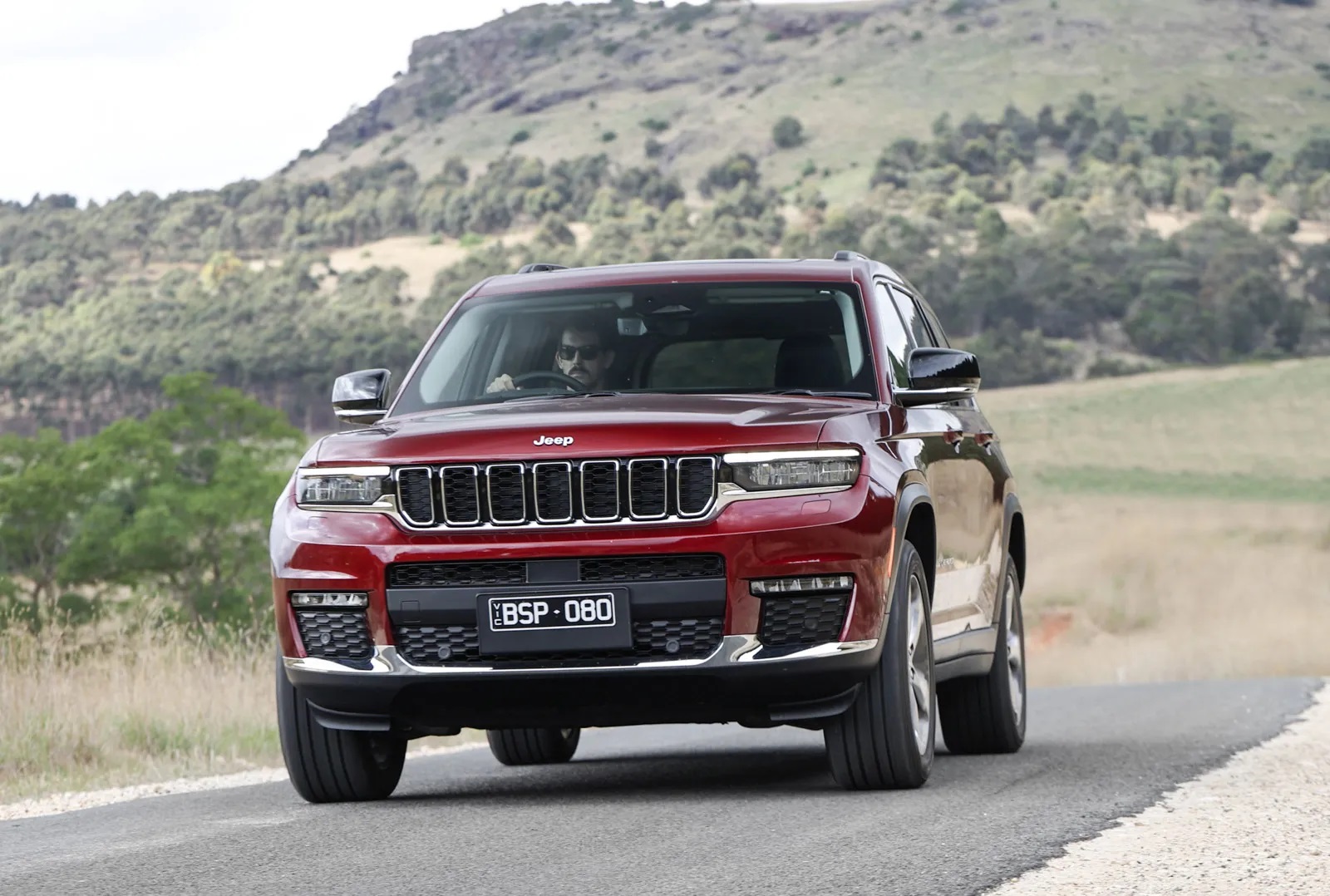 The juxtaposition could barely have been greater. While luxuriating in the range-topper’s ventilated and massaging quilted leather chairs, beneath the road-specific tyres it was a horror show of surfaces. Massive wheel ruts, large loose rocks and highly sketchy climbs and descents. All familiar hardcore Jeep terrain, albeit tempered with open-pore walnut wood trim, knurled metal rotary dials and a banging 19-speaker McIntosh audio system. Life’s little luxuries and all that. 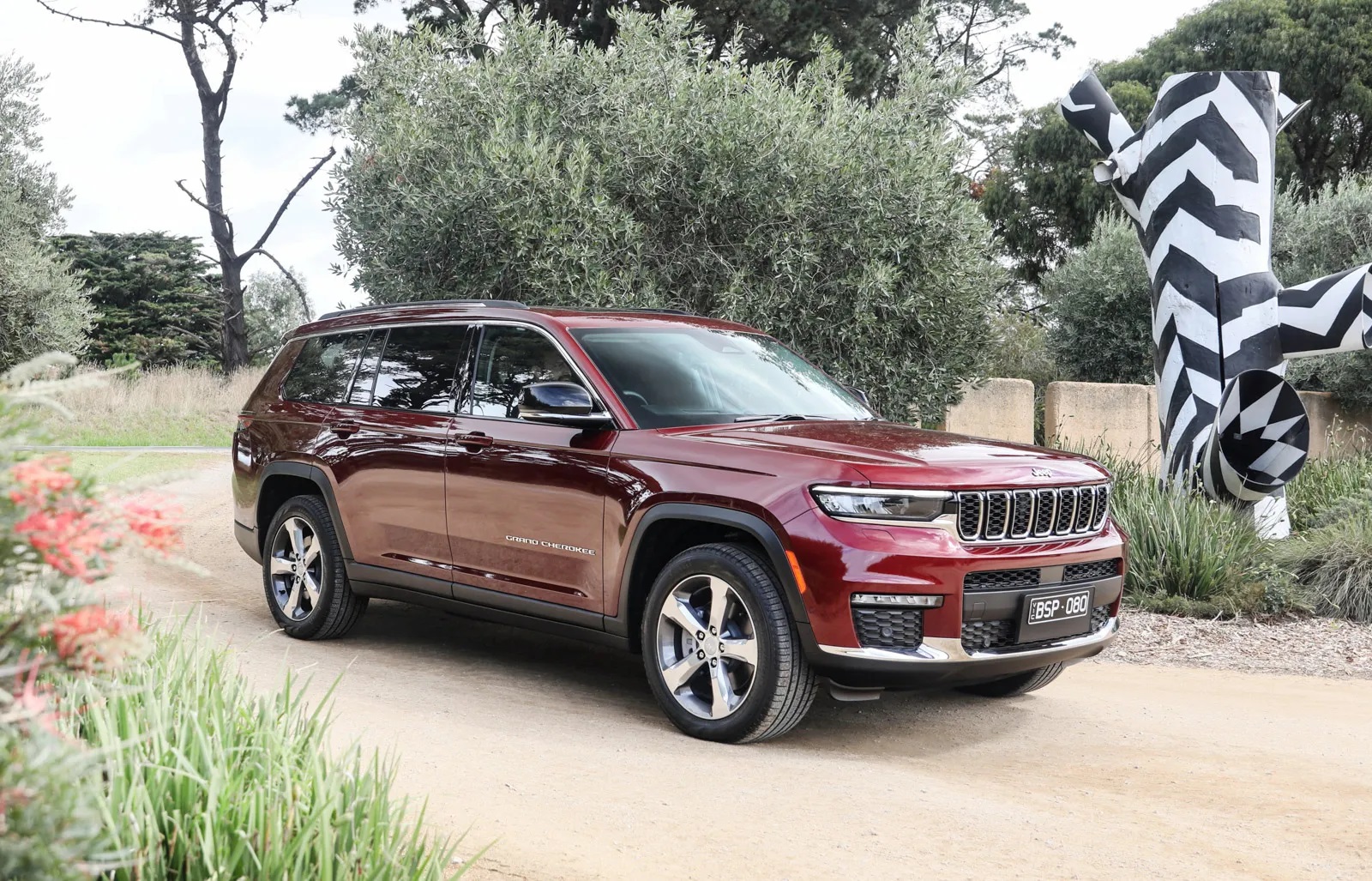 The tech and splendour sees the Grand Cherokee L flirt with premium rivals, with prices to match. Entry-level Night Eagle is $82,250, mid-spec Limited’s $87,950 and full-fruit Summit Reserve a chunky $115,450, all before on-roads. Add a few options to the latter – it’s another $5500 for a kit bringing head-up display, wireless phone charging, night vision and a screen for the passenger – and you’re staring down a $130k drive-away price. 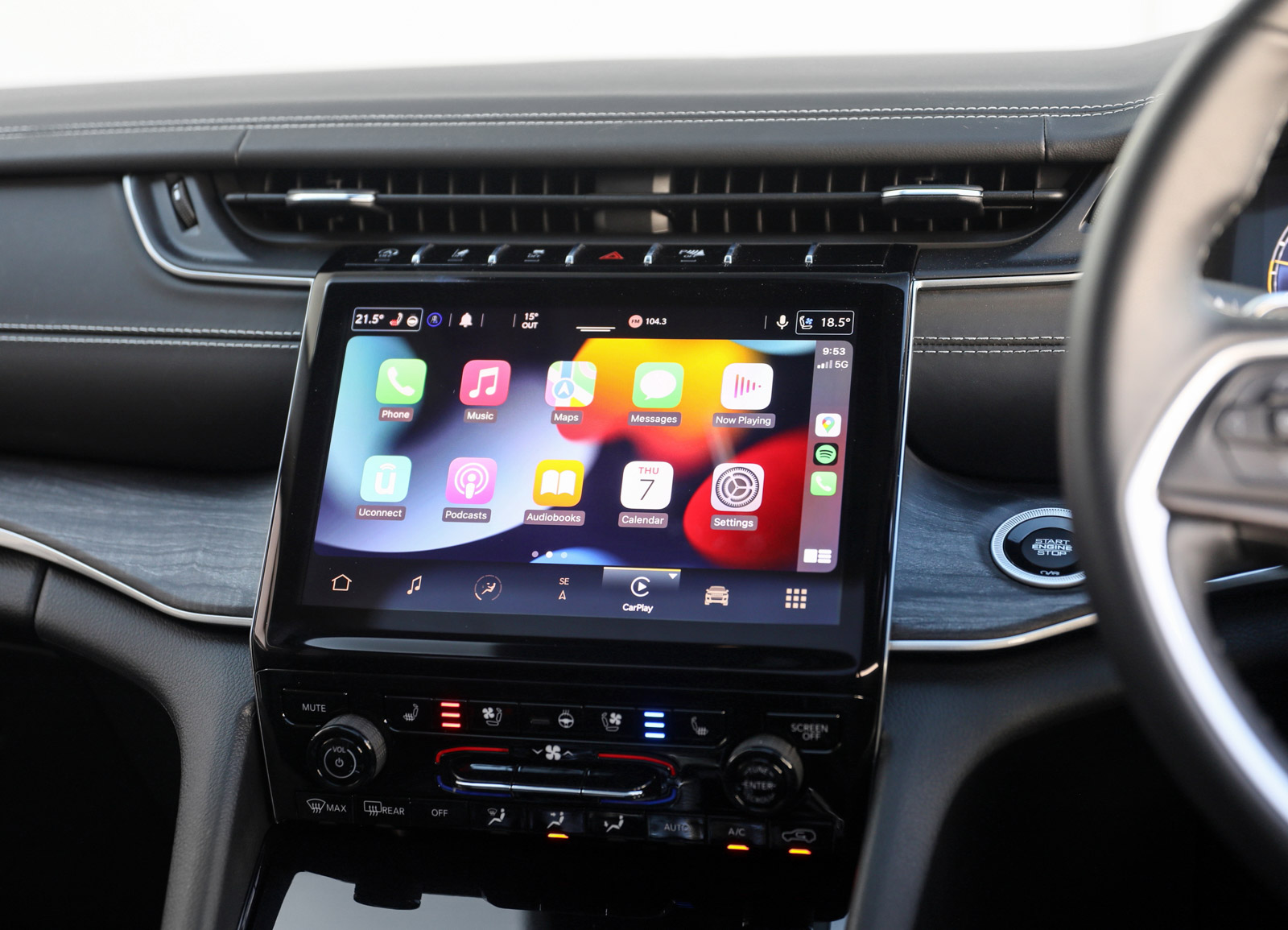 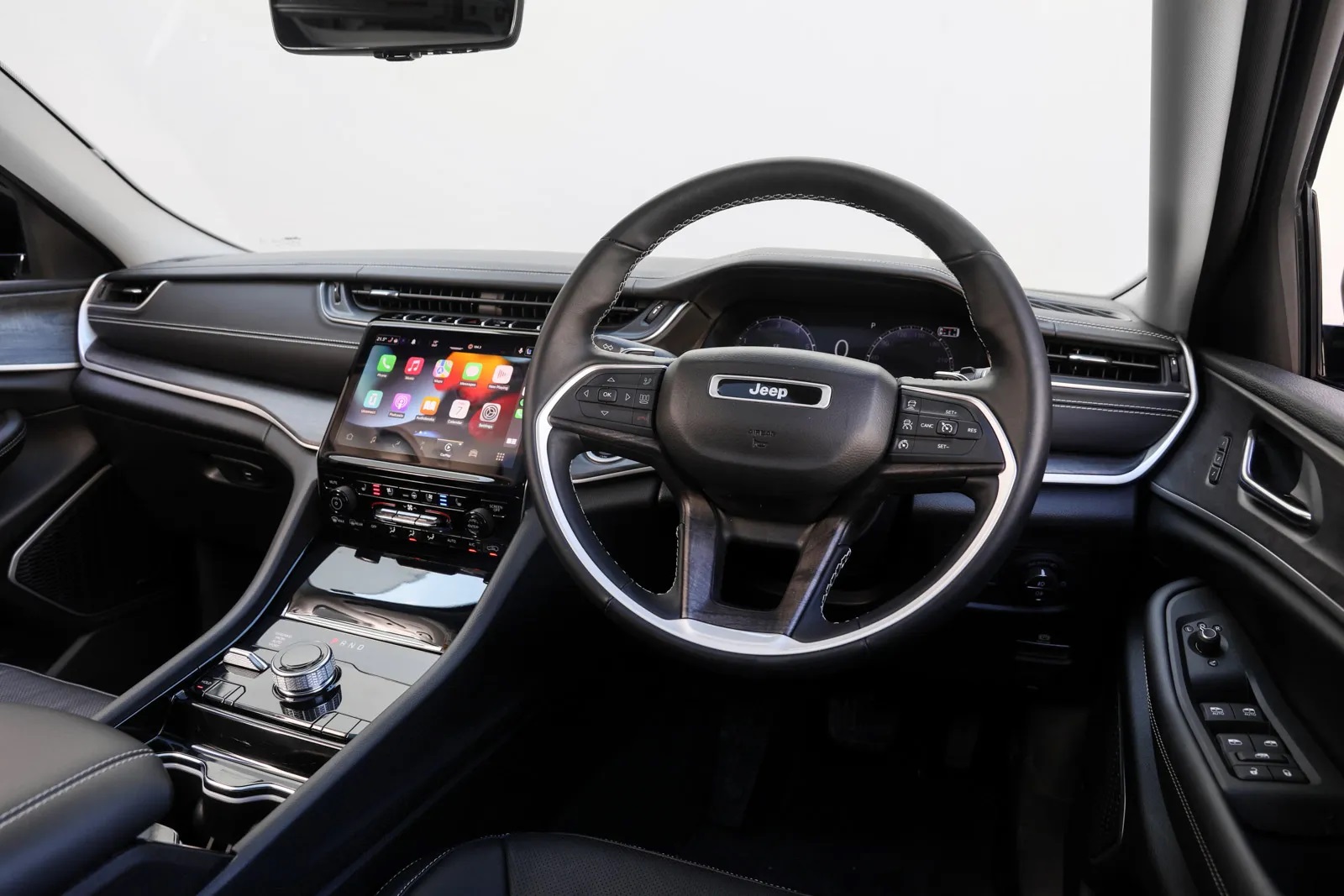 With all seats in use there’s still 487L boot space (more than a Mazda CX-5), and whopping 1328L with five chairs up. But really, only those who need a third row of seats should pick this ‘L’ over the incoming and cheaper five-seat Grand Cherokee. 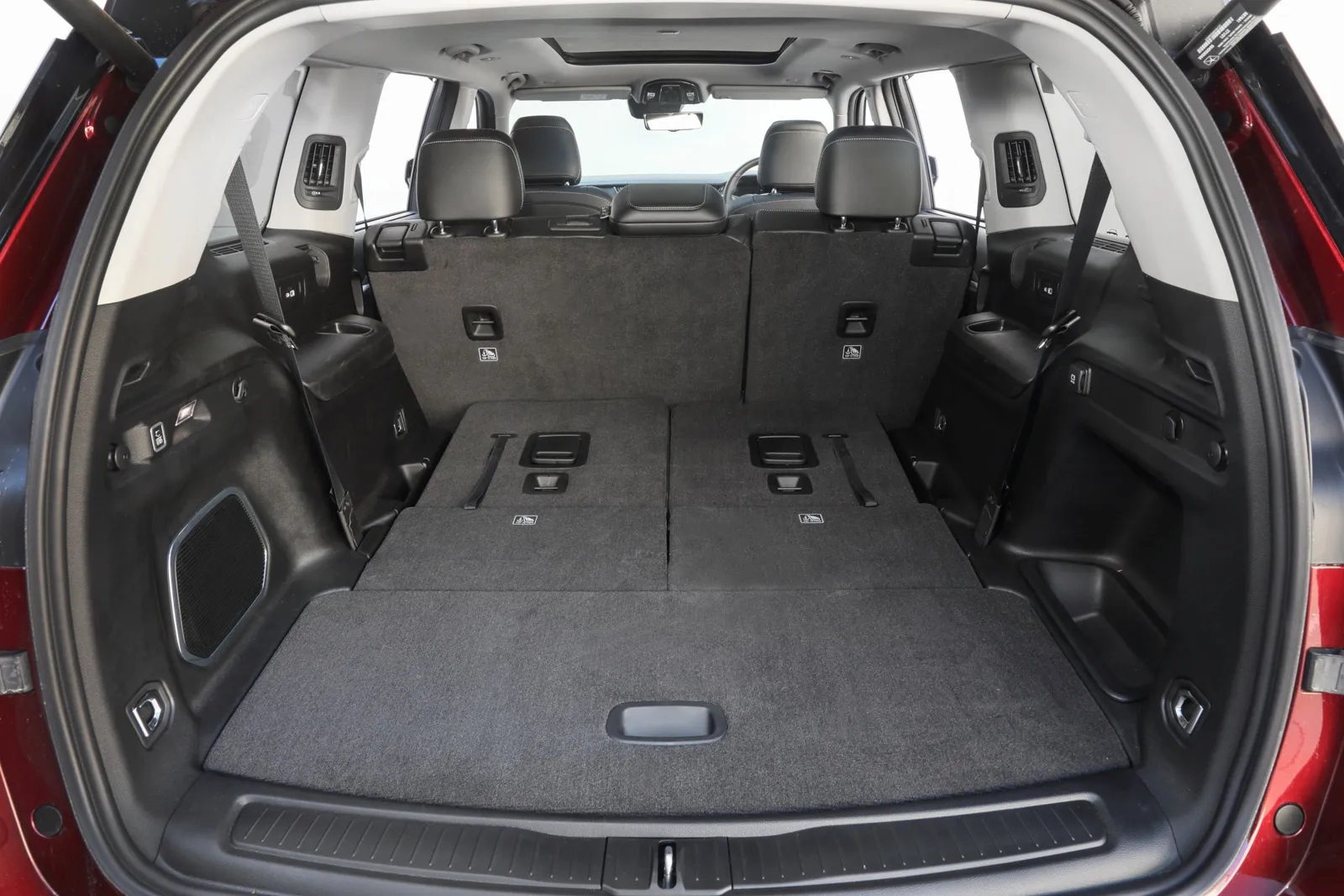 Regardless, the Grand Cherokee L would fit a rather niche seven-seat buyer seeking impressive – but not class-leading – luxury, off-road chops, towing ability, cabin space and on-road polish. A Jeep of all trades, if you will.

For daily duties and commuting it’s very easy to live with. Longer than a Patrol or LandCruiser it may be, but the Jeep feels less unwieldy through a corner, sitting surprisingly flat with no disturbing body roll. It’s no X5 or Porsche Cayenne handling-wise, but feels safe and responsive in turns despite its brutish size and not insignificant 2.2-tonne mass.

There’s decent weight to the steering, but brakes feel a tad spongy and lazy to respond. That said, stand on the pedal and the mighty Jeep pulls up with little drama. 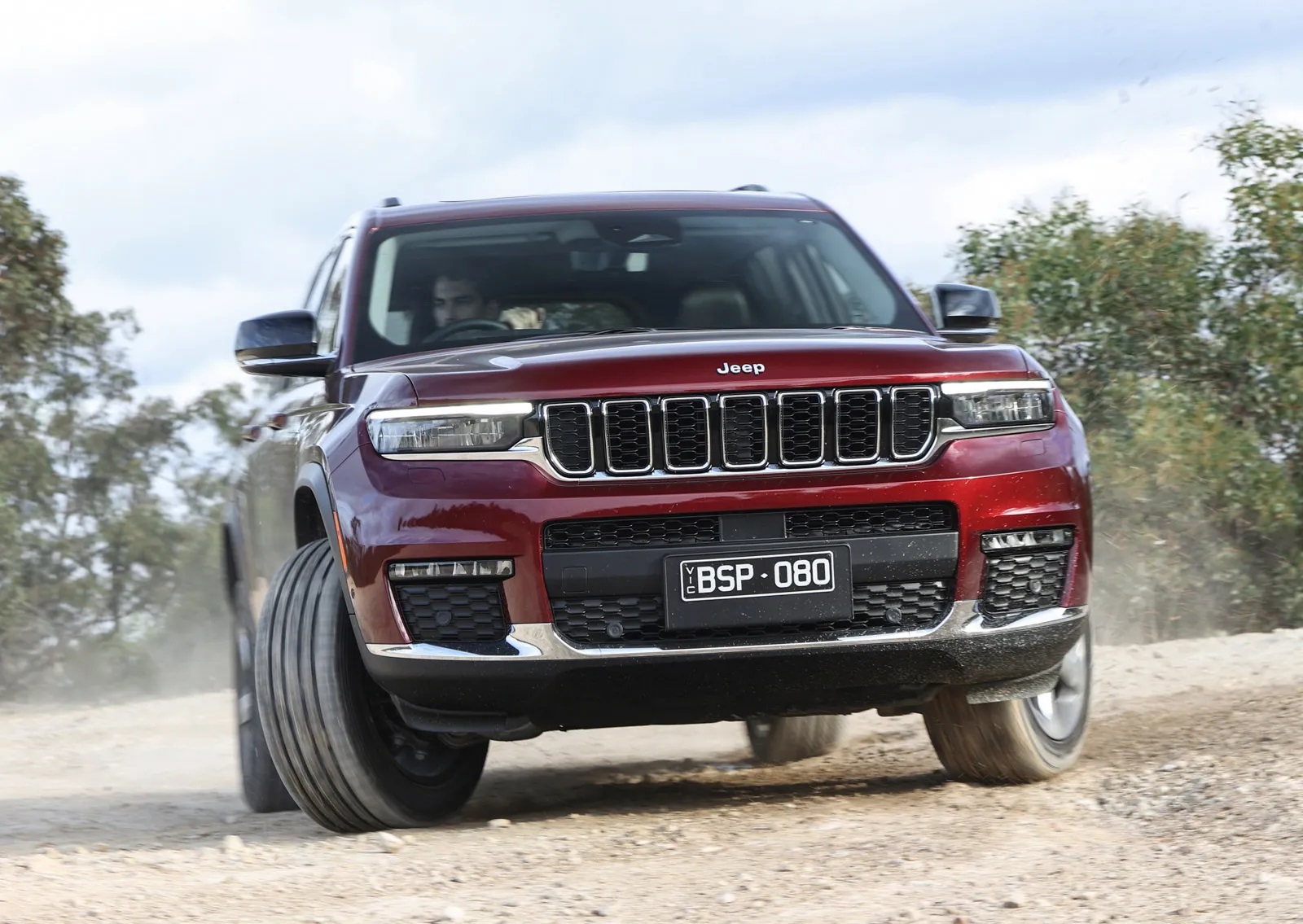 You feel impressively cossetted on highway drives with only a smidge of tyre noise from the 20-inchers (21-inch on the Summit Reserve). Sizeable road bumps are swiftly dealt with, the standard suspension setup showing enough ability to not covet the range-topper’s adjustable air suspension, excellent though it is. Even on some mangled bits of bitumen the GC held its poise. If ride comfort in all conditions is key, you’ll quickly warm to this Jeep. 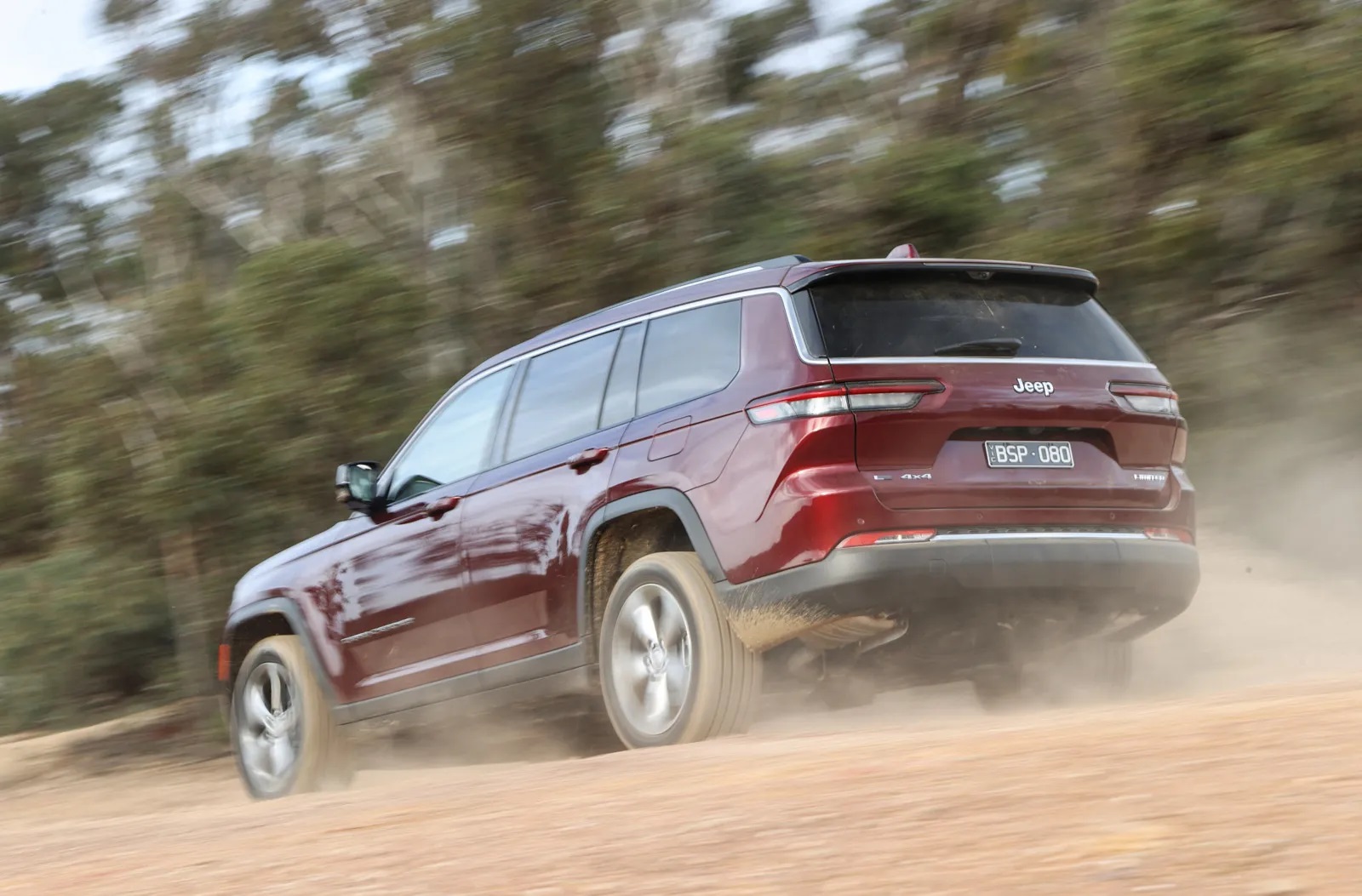 But you may feel hard done by with that sole engine choice – the naturally-aspirated Pentastar V6 petrol stalwart. It makes a pleasing, quite muscly note, has decent power reserves and settles into comfy cruise mode courtesy of a slick eight-speed auto. It’s pretty fuss free in town, too. But there’s just not the torque of a decent turbo-diesel or lusty V8, especially for instant overtaking or uphill shove. This doesn’t bode well for heavy towing, although we didn’t get the chance to test that. 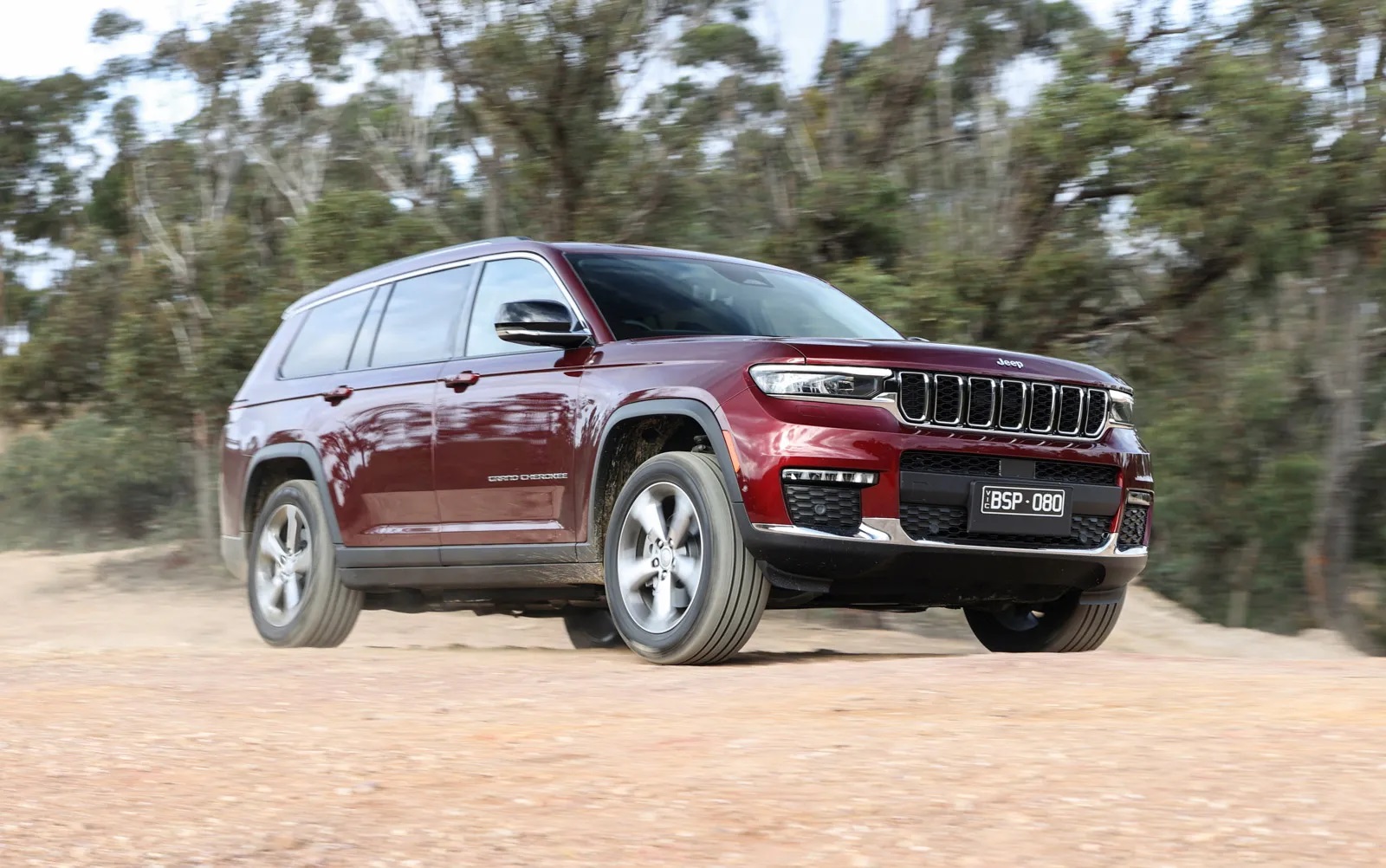 If you're planning some serious off-roading, the Summit Reserve’s the pick. Sadly, its $115,450 entry price and 21-inch polished alloy wheels with road rubber suggests its talents will be ignored by most buyers. But it’s hugely capable. There’s no vulgar clunk as it slips into low range and raising the air suspension gives gaping 276mm ground clearance. There’s also five different terrain settings and hill descent control.

No low range for cheaper grades, but mid-spec Limiteds score the traction management terrain settings, while the ground clearance is a more underbody-testing 215mm. To be fair, these Quadra-Trac 4×4 ‘lesser’ GCs went everywhere Summit Reserves did in our test, they just required more driver skill and sensitivity, plus an acceptance that lower clearance means the odd bit of underside plastic gets remodelled. 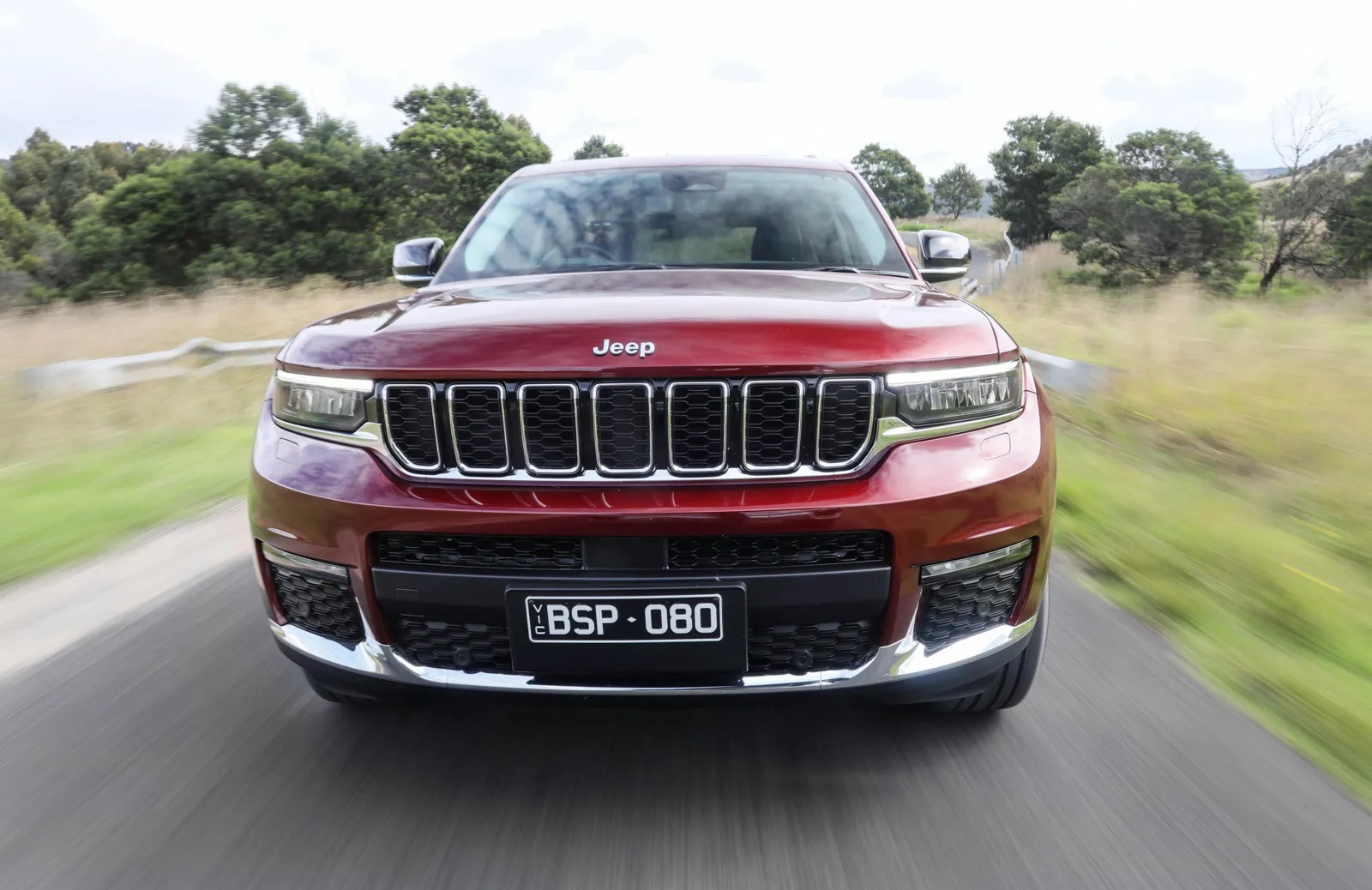 After a solid day of country roads and challenging bushwhacking the V6 petrol returned a palatable 14L/100km, while our bitumen sections saw 10.2L/100km. For those who can’t imagine seven-seat life sans diesel, my recent LandCruiser LC300 test (227kW/700Nm twin-turbo V6 diesel) returned 10.4L/100km overall. The Toyota has twice the torque of the Jeep’s petrol V6, but for general everyday duties, your fuel bills wouldn’t differ much.

The more time spent with the Grand Cherokee L the more that initial price shock wears off. Its size reminds you’re getting plenty for your money, the cabin’s an impressive leap over old in terms of space and quality, while its ability to shine on and off road make it a rare treat in the large SUV segment.

Its V6 petrol engine’s relative lack of power and torque, its thirst and inability to tow 3500kg will lose some customers, but others seeking a highly capable seven-seater could fill the void. Jeep Australia said they’ve received plenty of Grand Cherokee L enquiries from current German brand SUV owners, emphasising how this pricier shift upmarket may yet work. Impressively for a Jeep, this latest effort should feel no shame mixing it with the premium large SUV set.