It’s early days and there’s still a way to go, but even in prototype form, the Ineos Grenadier looks like it’ll be as capable off the beaten path as it is comfortable on it.

Words and Photos: via practicalmotoring.com.au

While we have driven an early prototype of the Ineos Grenadier in the UK, we were in the passenger seat of this ‘2B’ version, riding shotgun with one of the few people in Australia authorised to drive it. 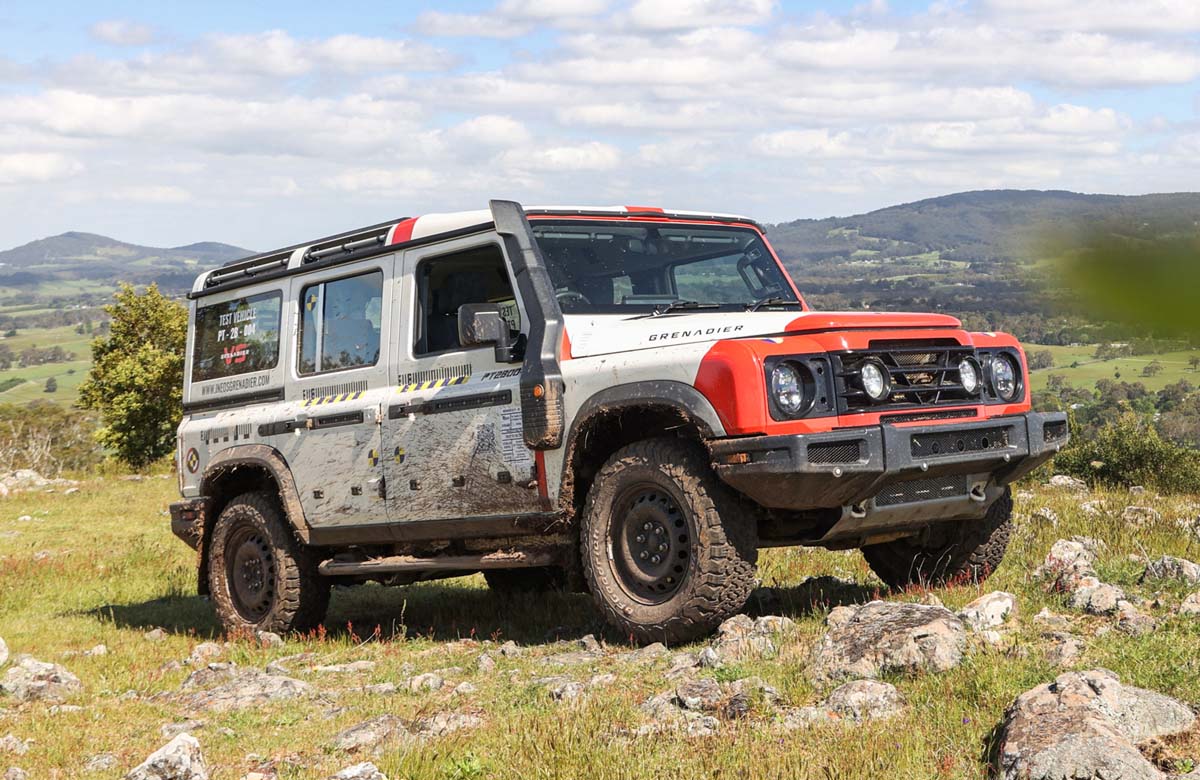 As it’s further along the development path, the 2B test vehicle we were passengers in had a few more “final” features than the version we tested ourselves, but it’s far from the finished Grenadier that’s due for Australian release later in 2022.

The private circuit we were tackling, around an expansive farm at Hanging Rock in Victoria, is nothing like the muddy bush tracks or bulldust-covered desert roads where this vehicle will undergo more serious evaluation, but it did have enough technical sections to allow the Grenadier to demonstrate its ability.

For the most part, it is a fact that the Grenadier is a ultilitarian, built-for-purpose vehicle whose whole raison d’etre is to go wherever you want to take it first, and be a fairly commutable vehicle second.

Not even the boxy old Land Rover Defender could achieve that in spades if you ever tried to daily drive one. This vehicle on the other hand feels like it has a level of compliance and comfort befitting more of the new Defender than the old, yet it seems like it will stack up as being as capable off the road as they come, at least from the showroom floor.

There are alloy wheels and steel wheels available in 17 and 18-inch diameter, standard tyres (18-inch) and these more capable BF Goodrich off-road biased hoops fitted to the aforementioned 17-inch steelies we’re riding in. The pressures are set at 30PSI we’re told, and it rides fairly softly over the bumps and rocks jutting out of the ground, although the 18-inch items at recommended pressure will likely have a bit more edge. Still, we’re off the road here, and it’s pretty smooth sailing. The suspension helps considerably too, with standard progressive springs all-round (the rest remains shrouded in mystery for now) and rigid axles from tractor maker Carraro are fitted to the front and rear, although we never got anywhere near finding the limits of maximum articulation. 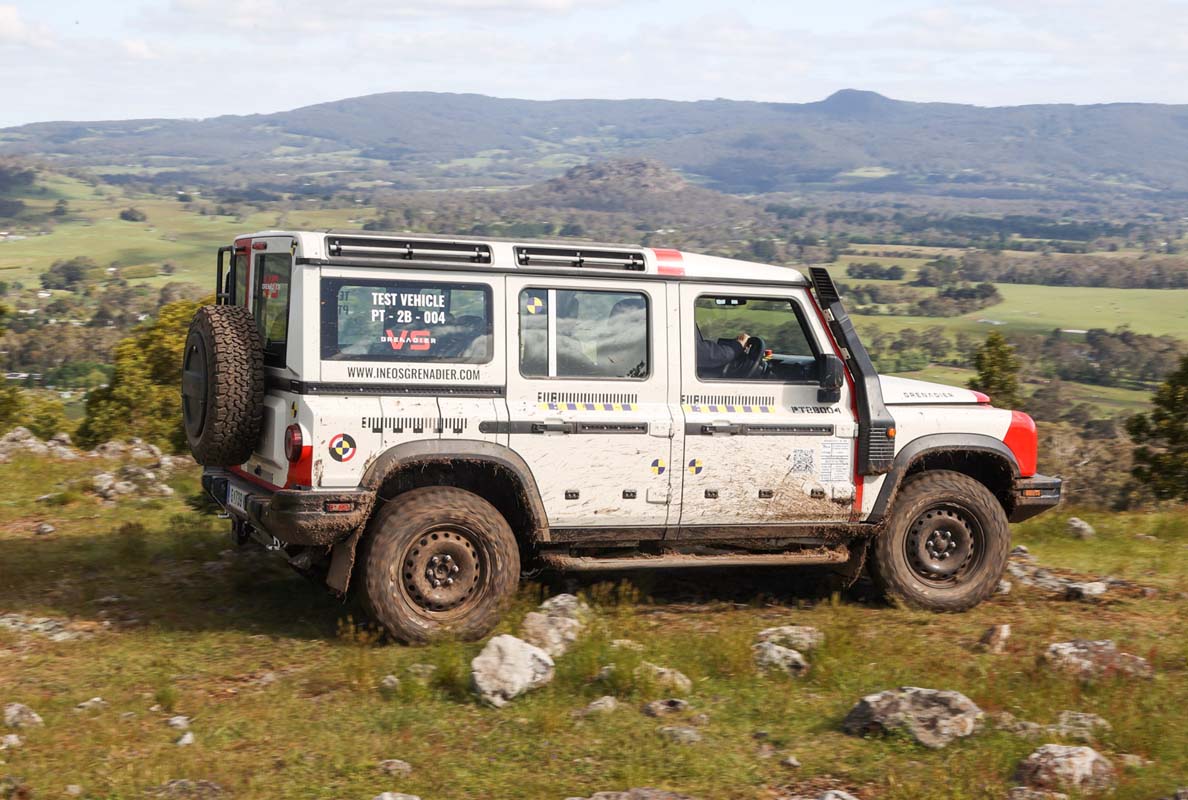 We approach a sharp hump with a steep fall off into a ditch which is a good test of the approach, breakover (to some extent) and departure angles. Both approach and departure points are protected by bashplates but the boxy exterior design and short overhangs mean they are not needed on this test.

Traction control is quite good too with no hesitation as we clamber through a very choppy mud hole where the aggressive tyres help and we’re only cruising along without any of the diff locks activated (centre is standard, front and rear are available). 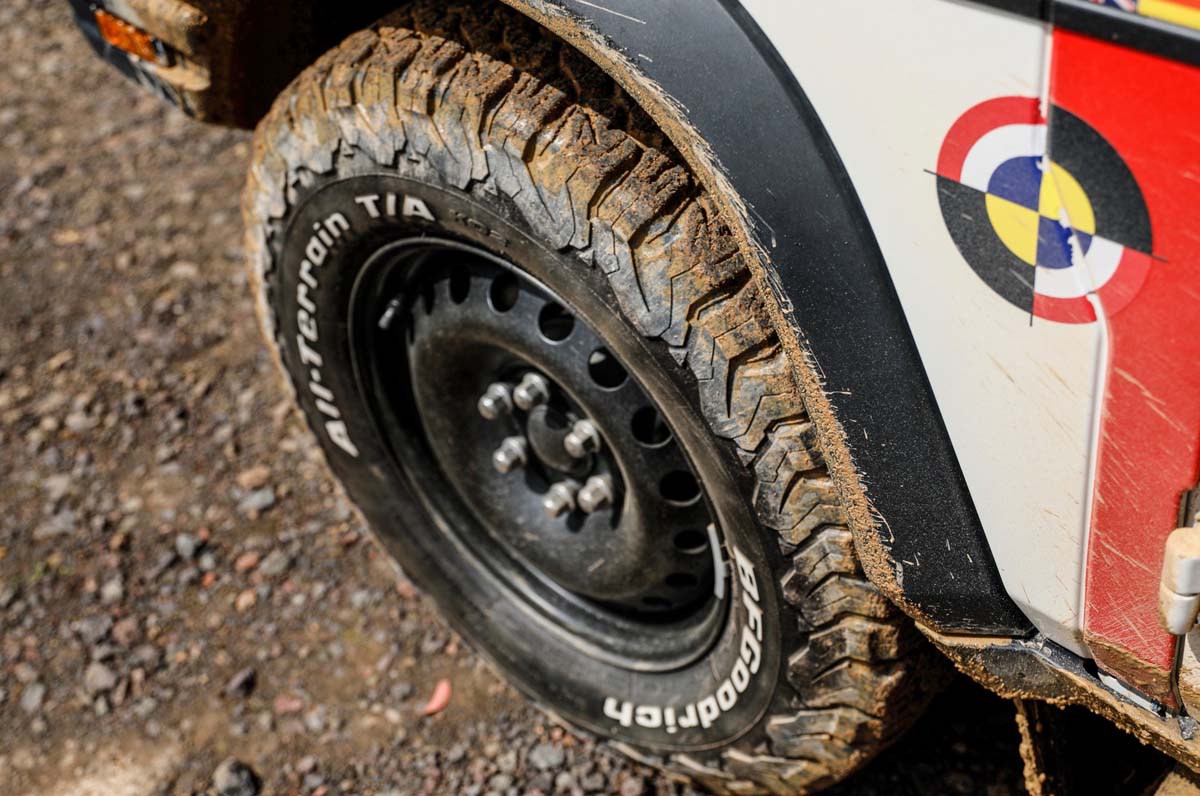 But what is most appreciated in this test is a refinement from the drivetrain that comes via noticeable low down torque when climbing a steep hill. Powering the Ineos Grenadier is a 3.0-litre BMW straight-six turbo diesel, and there will be a petrol version of the same configuration available. There’s no price difference between them we’re told, but it is the diesel that Australians will be buying in droves. Final output figures are expected around 185kW and 550Nm for the diesel; the petrol engine 210kW and 450Nm.

The permanent four-wheel drive with shiftable low range and a central locking diff is Ineos’ own design, but power is transferred via an eight-speed ZF automatic gearbox.

We’re never up to a fast speed as we crawl around the farm, but it shifts smoothly in both fully-auto and manual override, and the torque is smooth and punchy. Honestly, the BMW engine is very familiar given its ubiquitous use in the Bavarian marque’s range, and it is a good performer. But it’s interesting to see it in this rugged application nonetheless and its augmentation with Ineos’ own transfer case must be a tricky piece of engineering to get right.

Beyond the mechanical makeup of the Grenadier, thoughtful design takes centre stage. There are no roof rails (optional extra) but there are four strap rails built into the side of the roof and with bumper rails on the roof, you can still tie down things like timber, panels and camping gear. The rear tailgate has 30/70 split doors (one with a roof-access ladder) and the compact housing of the taillights means the aperture is very wide. Inside the boot are tie-down points, with cargo rails and accessories able to be fitted. Indeed, the car’s focus is on easy modification, particularly with items like the standard size aircraft rails for attaching clamps and fixtures and the four accessories switches in the centre panel upfront. 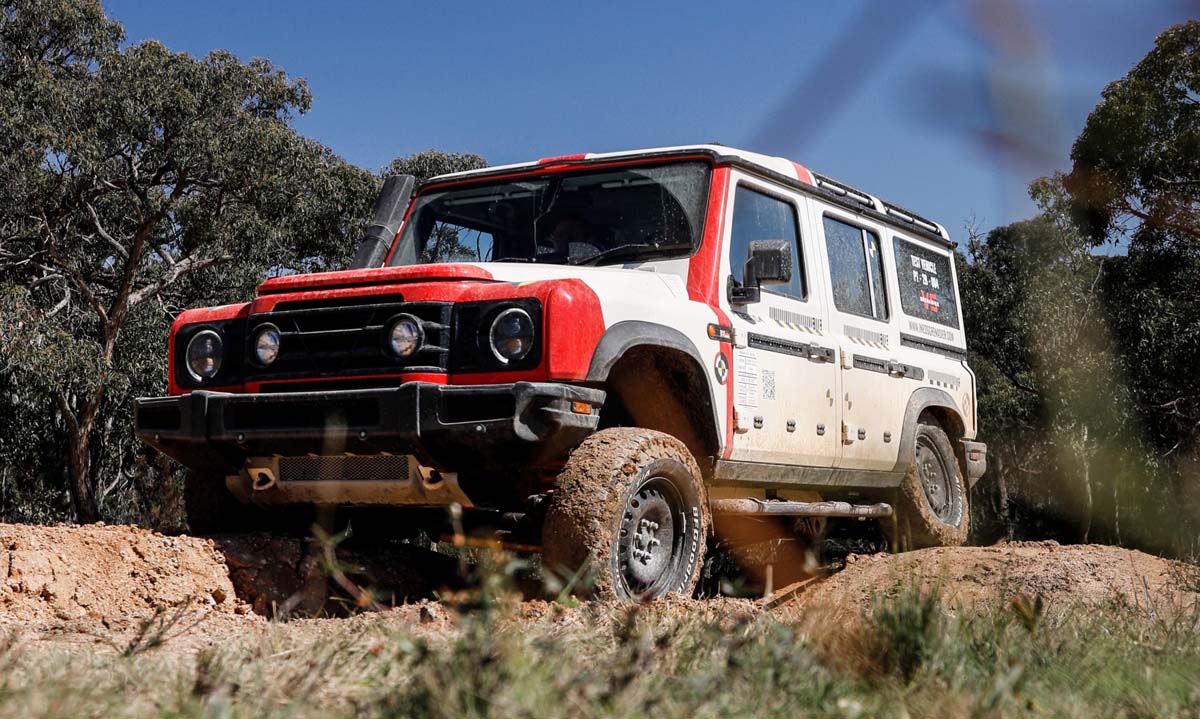 While the centre console below the 12.3-inch screen and air vents looks like it contains everything you'd need, there is also an aircraft-style overhead panel with switches. While it looks good, it also helps remove an over-cluttered centre console full of buttons, so you can easily (presumably) use the switches and buttons with gloves on and won’t accidentally activate one next to it. 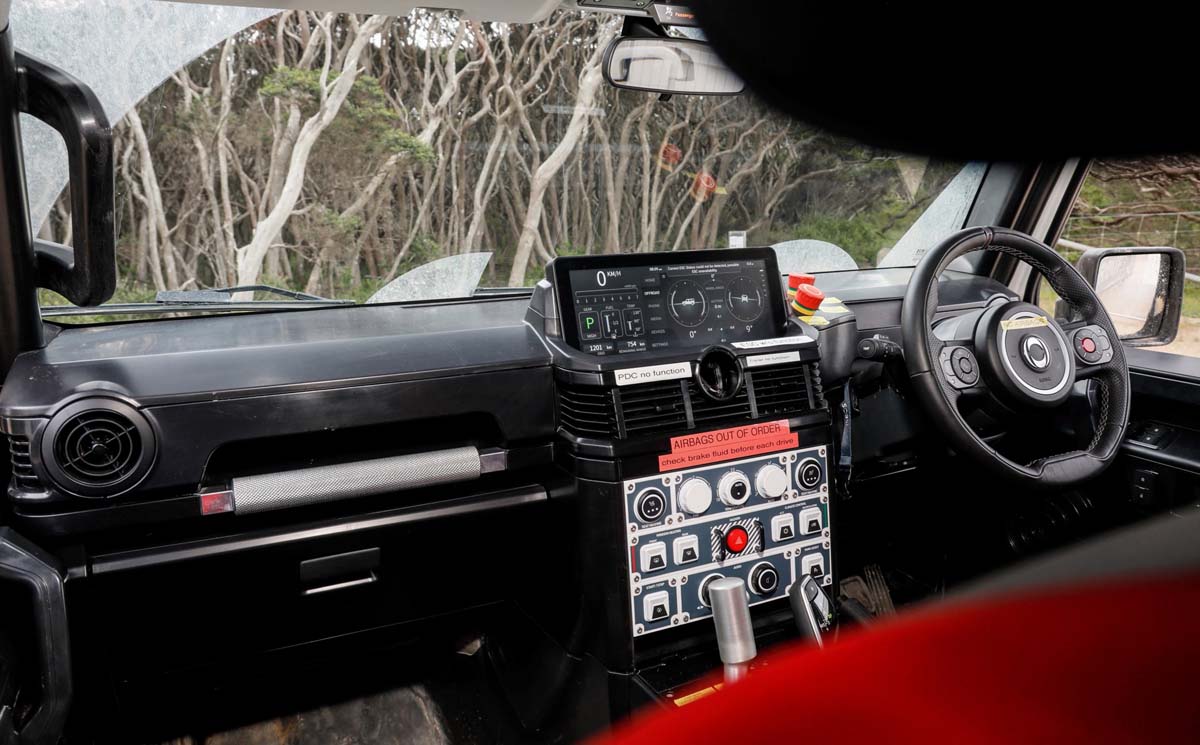 The interior in this prototype contains unfinished plastics and things like door handles in the wrong places but overall you get the feeling it will be a for-purpose interior with some nice touches. There’s optional saddle leather for instance, though the basic steering wheel and standard fabric-trimmed Recaro seats we saw were quite good. Comfort should be up to par for long trips though we were in and out for 15 minutes stints, the driver getting a large dead foot rest (no manual transmission will be available) and nice armrest areas. Headspace is quite good and there are optional safari pop-out roof hatches on the driver and passenger side available.

If this is all something that sounds interesting then you can register your interest now at: ineosgrenadier.com/en/au/ Grenadier production is set to commence in July 2022 and deliveries to Australia should, hopefully, commence in October 2022. The five-door wagon with two seats is priced from $84,500 before on-road costs and the five-seat is priced from about $1000 more than that. There’s no room to haggle with Ineos’ agency model that the Grenadier will launch with, but those prices are quite competitive, particularly when you consider there’s nothing much like this on the market, and if the final product is a polished version of what we’ve experienced, buyers should not be disappointed.