It looks tough, but how does Nissan’s Navara PRO-4X handle the rough stuff? We take one off-road to find out.

Nissan’s Navara has recently undergone an overhaul. While not major in terms of alterations to the underlying chassis, it has introduced better technology and upgraded safety gear, some minor revisions to the rear of the chassis, as well as a more contemporary and bluff appearance.

That brings an objectively nicer looking ute with better mod cons, much better safety credentials and an increased payload on the practical side of things, but there’s also one big addition that comes in the form of the flagship PRO-4X ute. 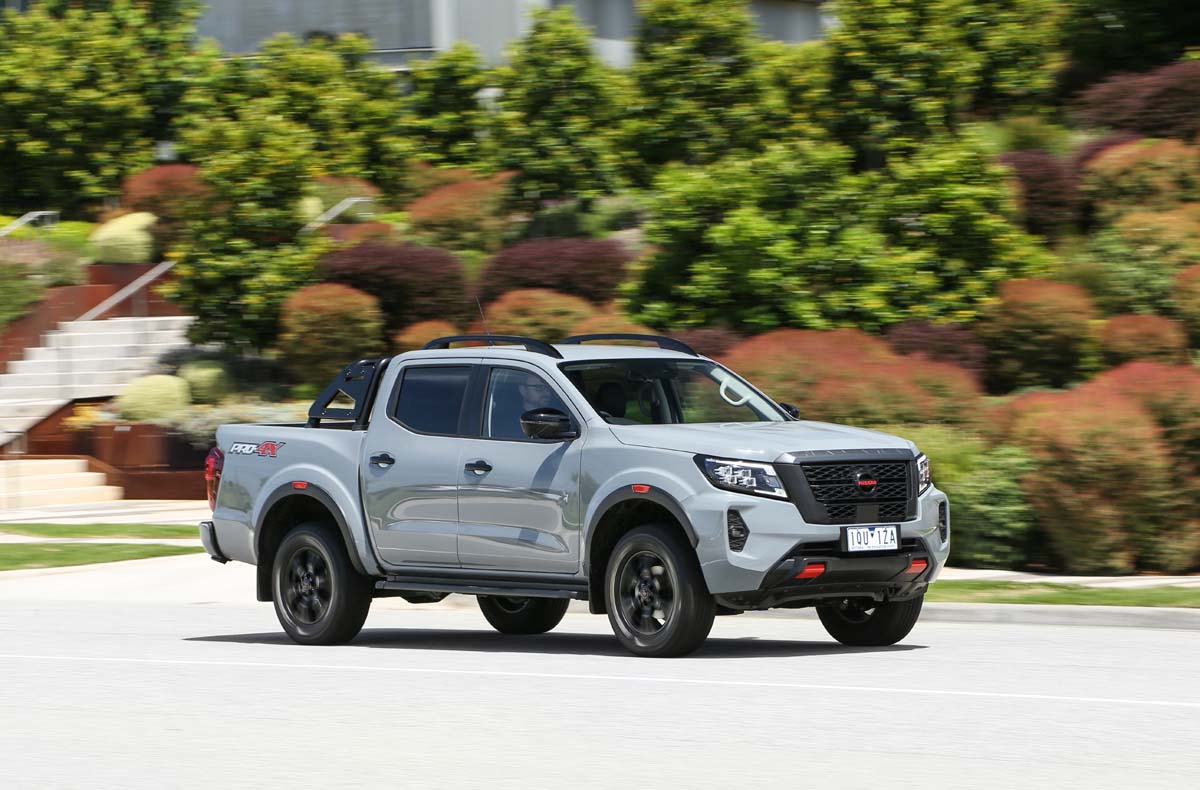 The PRO-4X is the bold, out there model inspired by Nissan’s Titan flagship pickup truck in the US, and it brings things like black alloys, all-terrain tyres, a unique sports bar and ‘PRO-4X’ stickers and trims.

This base has undergone further modifications at Premcar in Melbourne to create the ‘Warrior’ specification that ups off-road cred a lot, but those mods are not for everyone and bring additional cost. 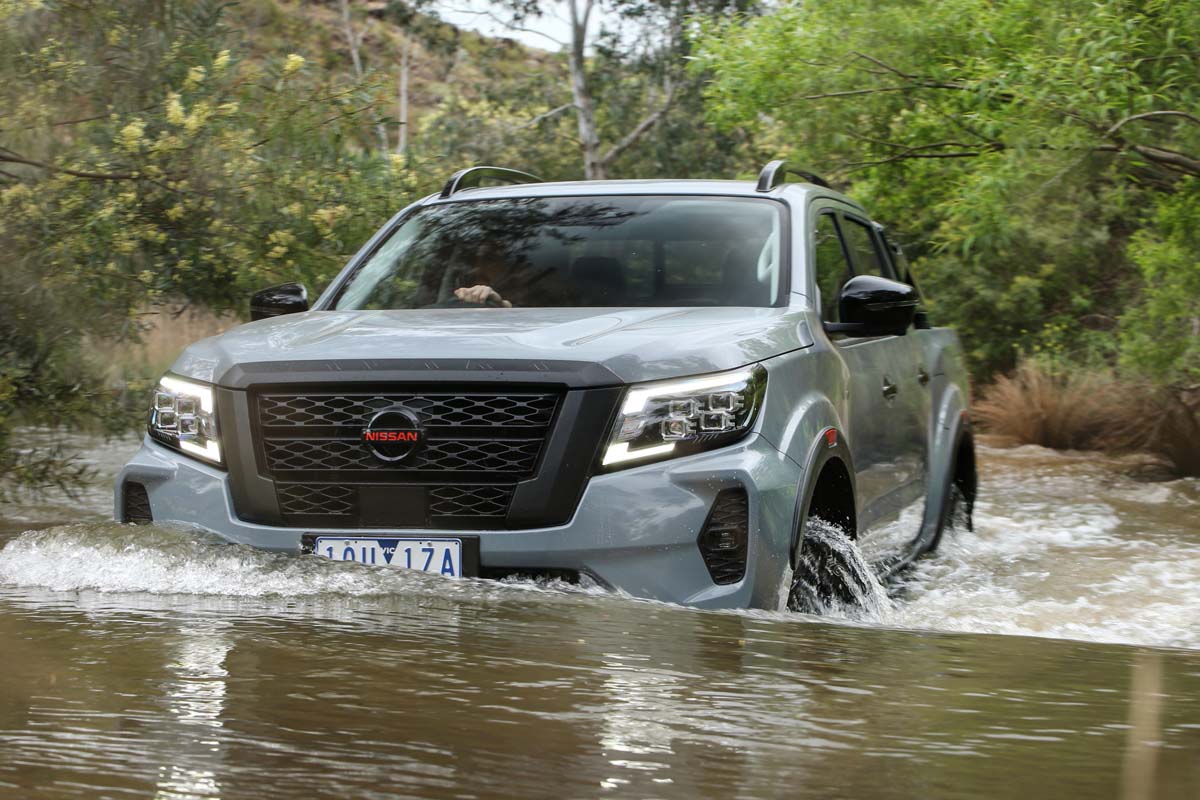 So, what about the stock PRO-4X? Just how good is it off-road?

We took one to Werribee 4×4 to give it a test on a slightly wet and boggy winter day. This 4×4 park consists of various challenges, from water crossings to steep gradients. What you find here covers what most intermediate 4×4 tracks will throw at you, and this is about the sweet spot for anyone looking at buying a stock tough ute on the showroom floor for both urban duties and going out into the bush. 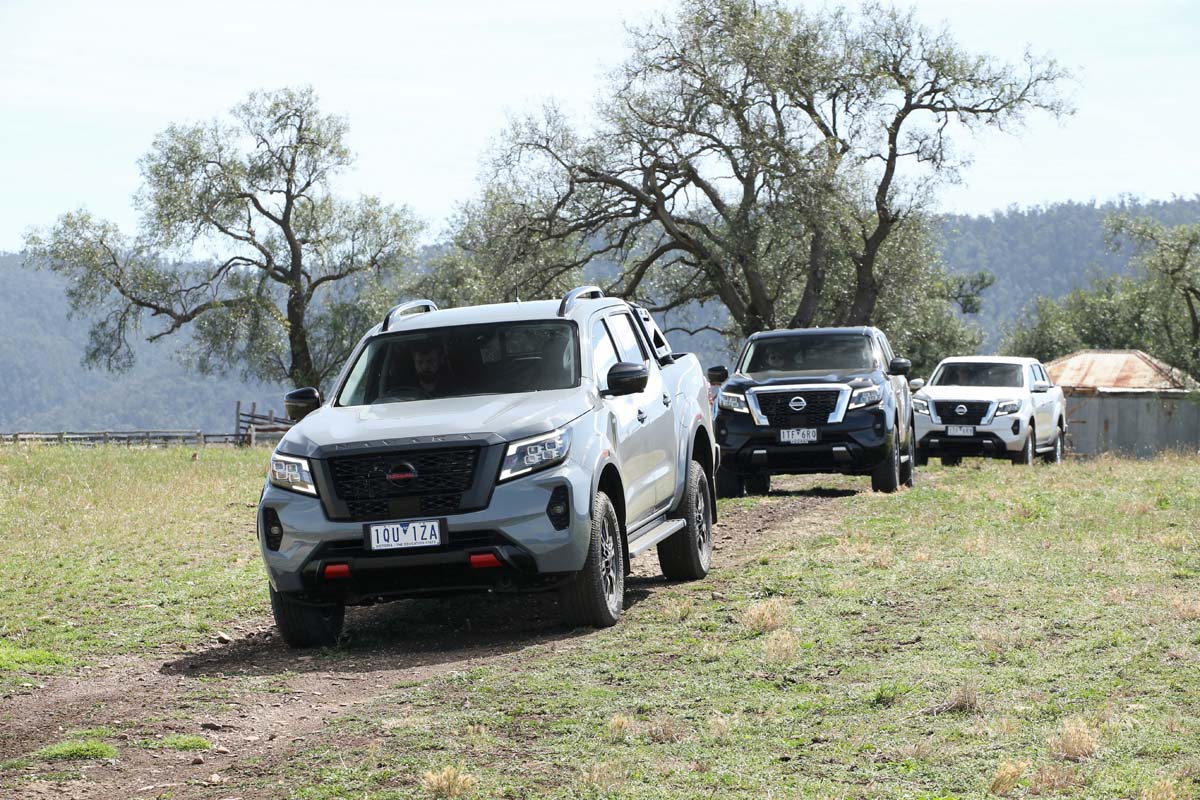 The standard dual-cab Navara PRO-4X is priced from $59,790 with a six-speed manual or $61,290 with a seven-speed auto, plus on-road costs. Drivetrain is the same 2.3-litre twin-turbo diesel four-cylinder as before. 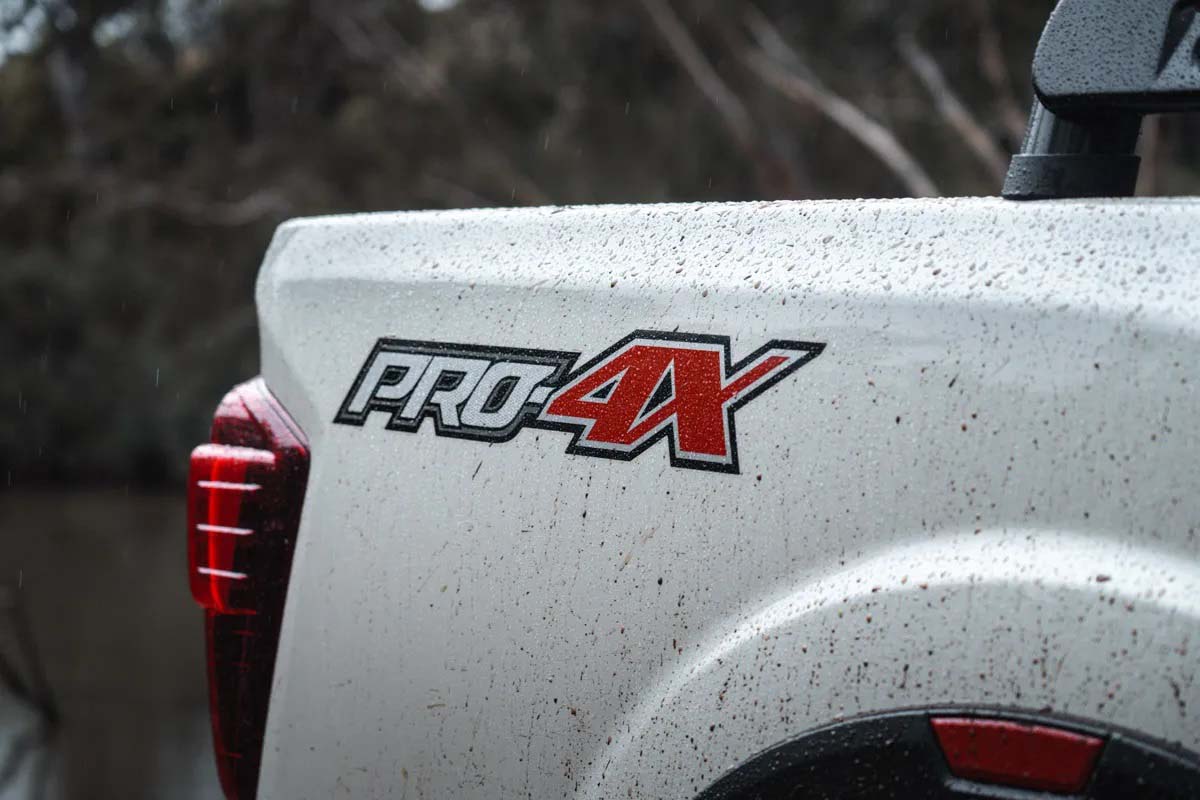 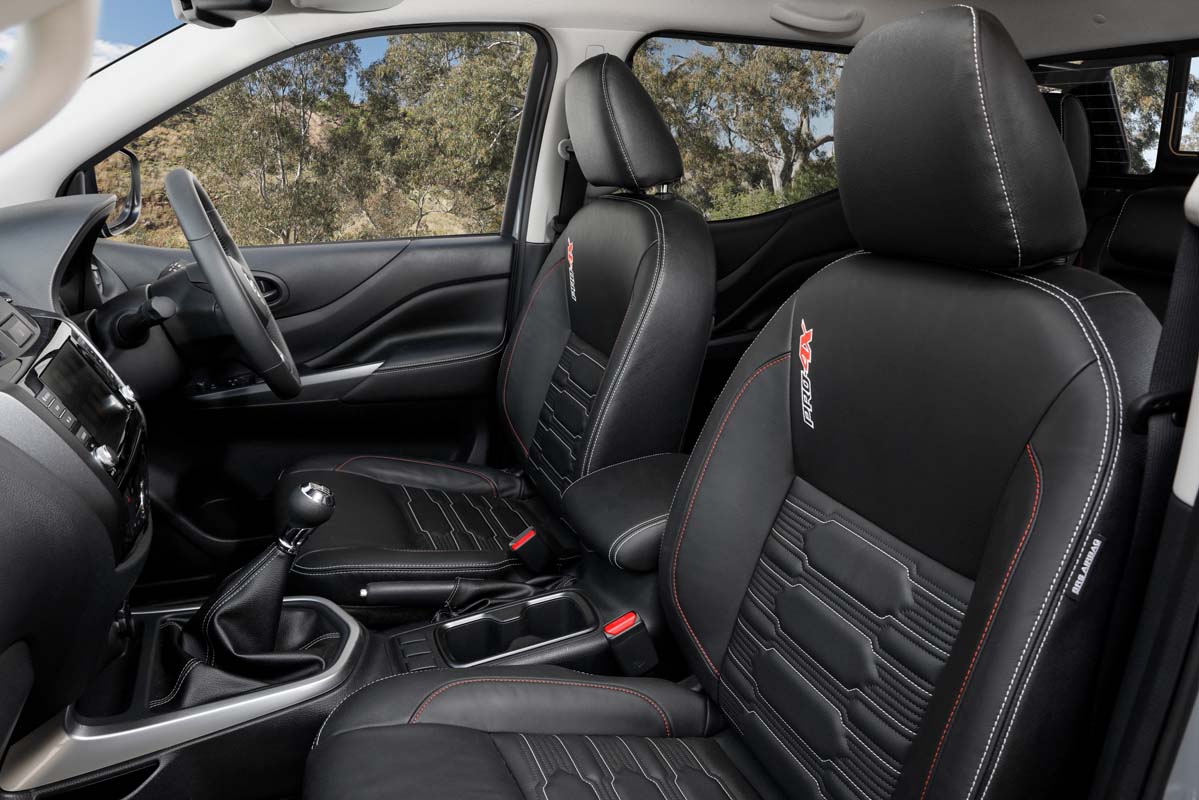 While it’s a familiar design overall, Nissan has gone to town with the PRO-4X to distinguish it above any other Navara offering. The leather seats are stitched with a quilted pattern and the PRO-4X highlights pop out. The seats themselves are supportive and comfortable, although there’s no electric adjustment and the steering is tilt-only, but this reviewer’s six-foot frame found a comfortable seating position easily enough. 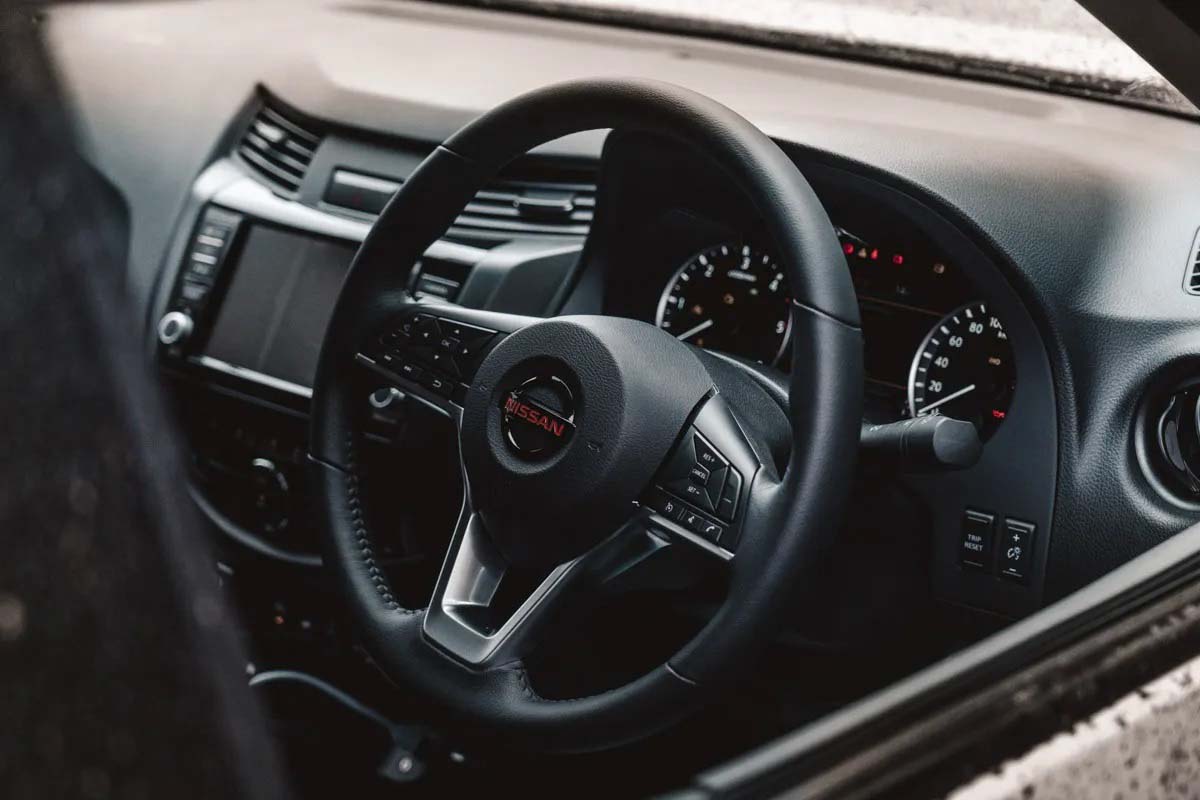 In the back, the seats are pretty ergonomic for a ute and the legroom is decent – fine for adults and practical - with access to one USB port. The rear window also features an electric sliding port that opens up and could be useful for sliding in a beach rod, running a 12v to a car fridge (there’s no plug in the tray) or simply checking on the dog. 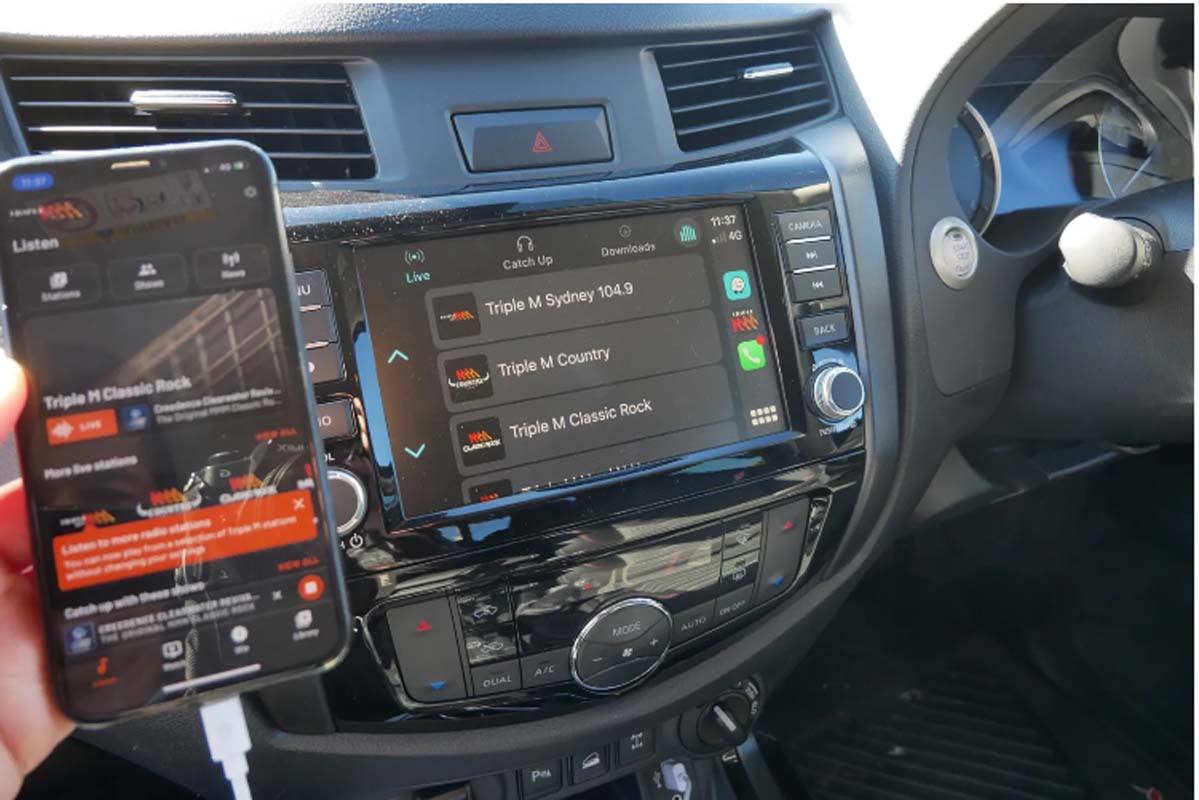 Up front, there are another two USB ports that provide Apple CarPlay or Android Auto connection to the 8.0-inch touchscreen. The screen is bright and crisp and even in glary conditions, it is clearly visible. The best feature, however, is the 360-degree cameras that can now be selected in split-screen mode and are useful for off-roading, including a look at the ground up front or along the side of the ute. There’s a smaller digital dash in the cluster for driving information, too. 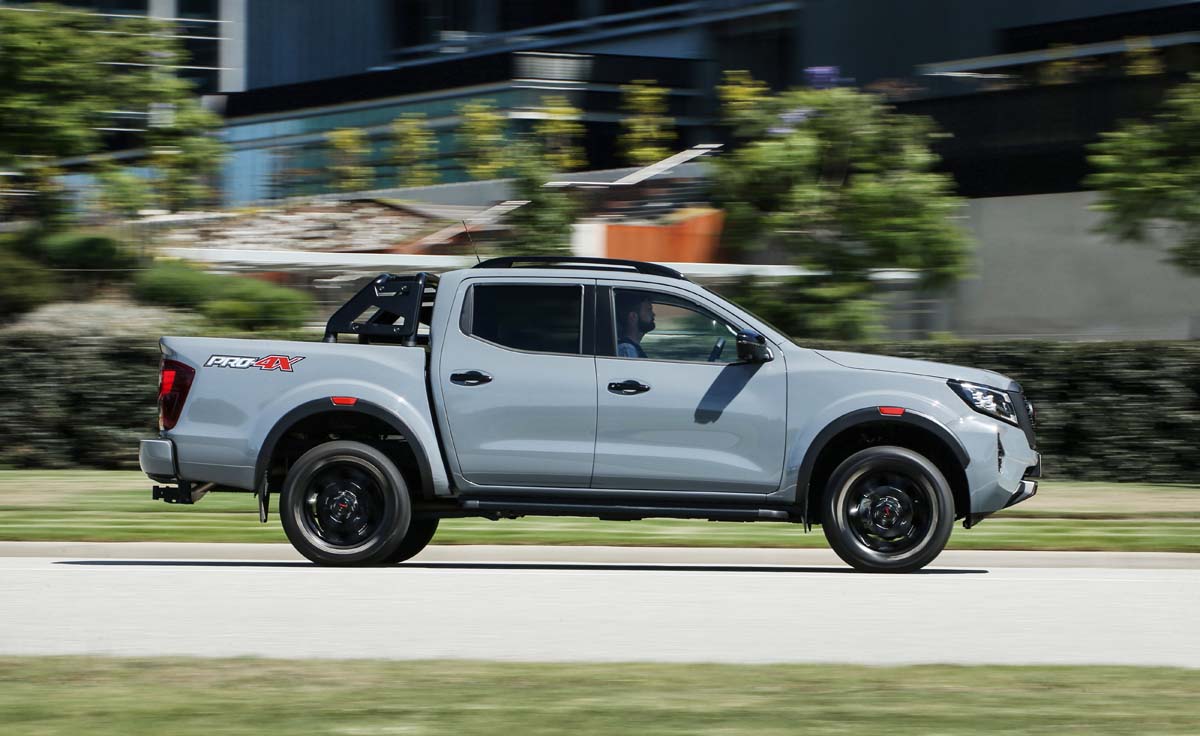 The tray is slightly higher, which increases holding capacity, while a rear step in the bumper makes access easier. The tailgate itself also drops against friction for soft opening, thanks to a simple pan rod in the hinge. It works well, and while we’re at it, Nissan has also pressed ‘NAVARA’ into the tailgate which is better than using stickers. 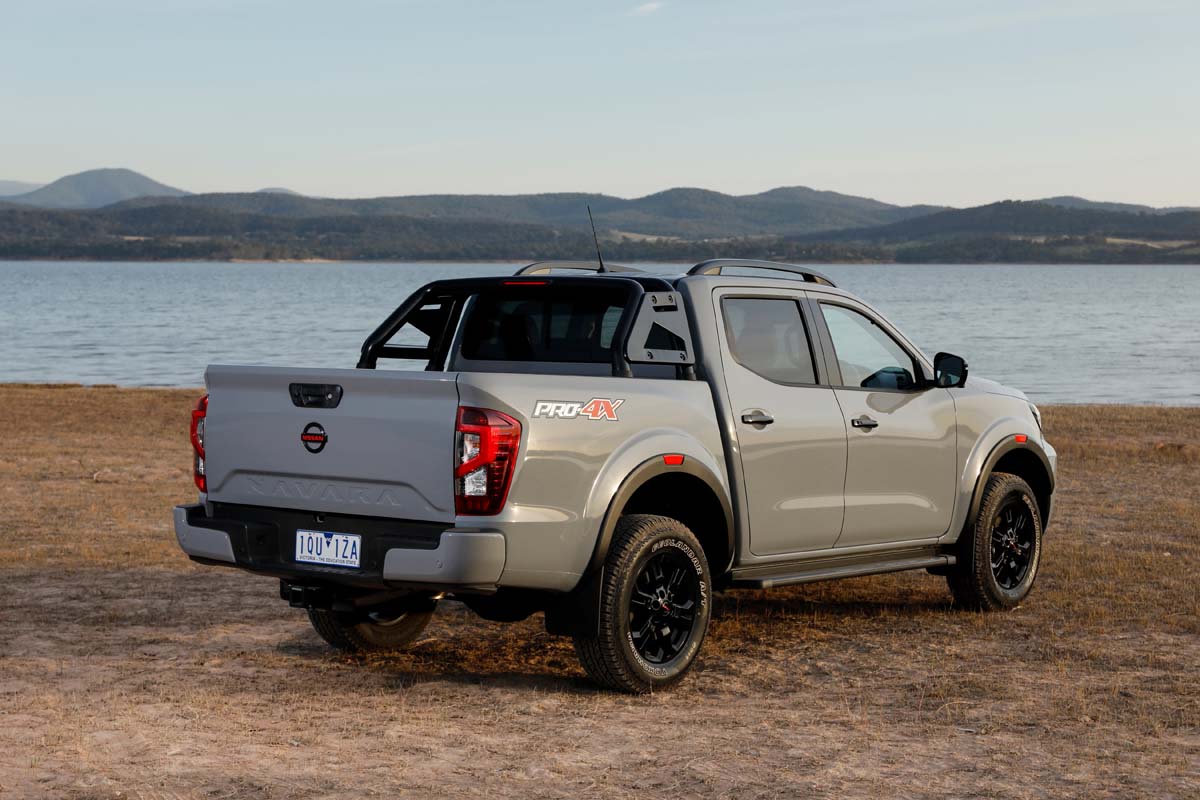 In the tray is Nissan’s Intelli-track cargo rail system and we found it quite fast to use, with twist rings to simply undo and slide the hooks along. The increase in payload capacity (thanks to a stronger rear axle) to 1004kg is a boon, too, and new Navara owners gain an improvement in practicality. Braked towing capacity remains 3500kg.

Finally, there’s that new sports bar which is bulky but adds some visual impact to the rear. 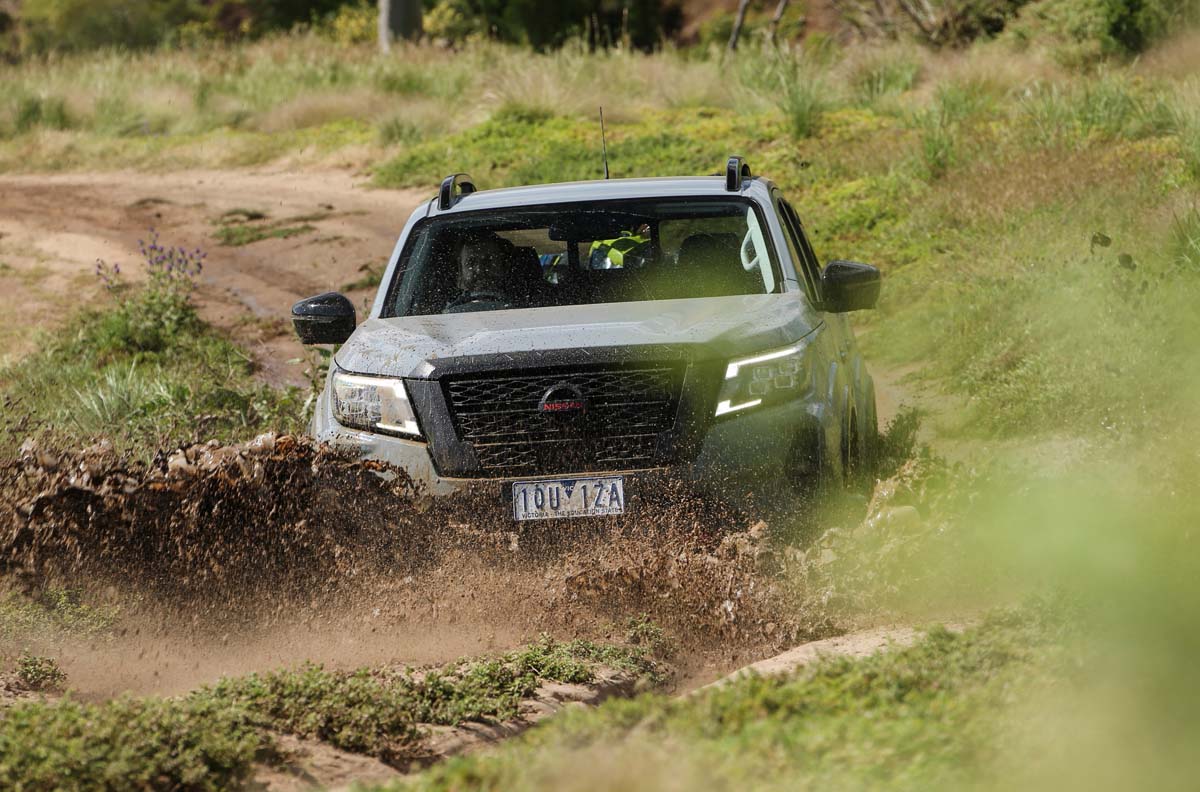 The Navara PRO-4X uses Nissan’s 2.3 engine to produce the 140kW and 450Nm via a six-speed manual or seven-speed auto. The auto we were testing helps keep fuel consumption frugal at around 8.0lt/100km and is a solid unit.

Performance from the engine is fine around town and also in the bush, but is blunted once you add over a tonne in the back or hook up a loaded trailer.

Connected to the transmission is a part-time 4×4 system with four high and low, that requires you to be standing still in neutral when selecting low range. The drive selection is confirmed on the dash, as is the rear differential lock when engaged. 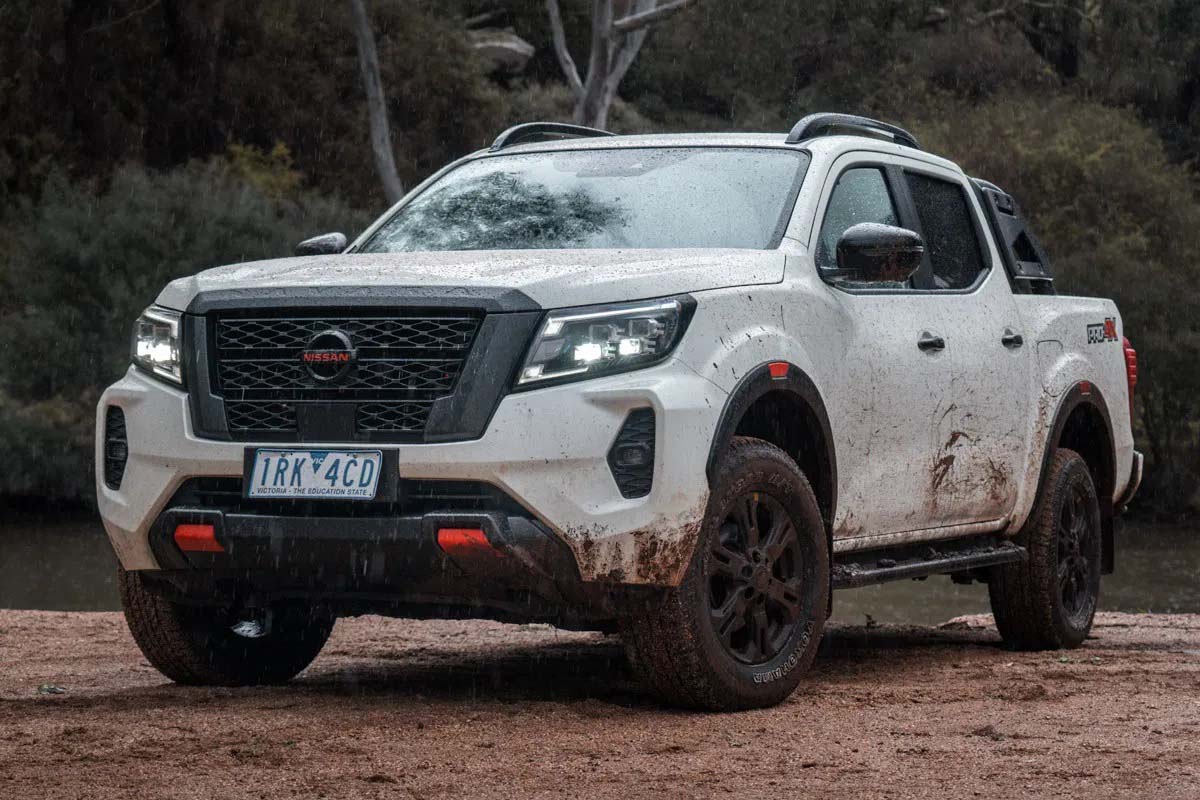 Given the muddy conditions at Werribee 4×4, we were not sure how well the Navara PRO-4X’s good but not very aggressive Yokohama Geolander all-terrain tyres would handle the muck that was inevitably going to be stuck in them, but we actually never once had to recover. The point of these tyres is a blend of on and off-road performance, so if you’re the urban tradie type or even do a bit of gravel driving, these tyres provide a good blend of comfort, low noise and on-road handling. Off-road, we think they do well, too, though keen explorers will want to swap them over. 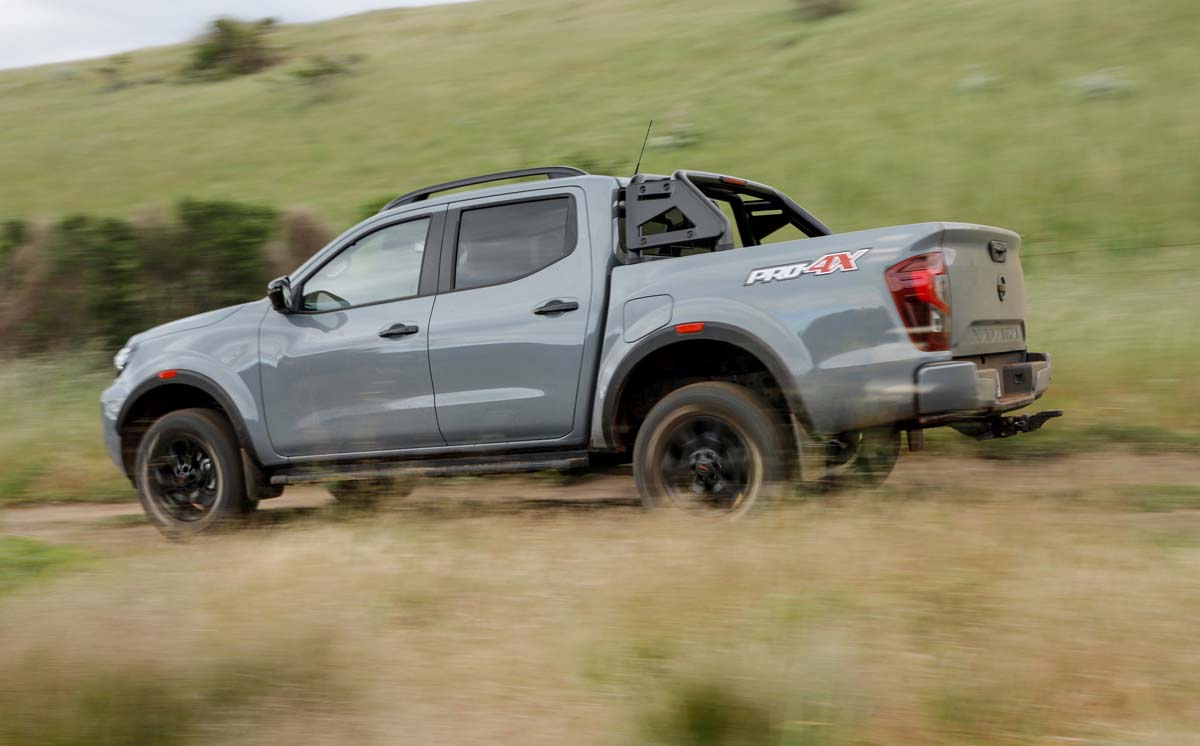 On steep hills, including a sealed 60-degree ramp, traction was strong. The rear differential lock helps in gravelly, loose rock ascents and electronic traction control helps the front wheels to drag the ute along. A couple of moments required a prod of throttle to sharpen response from the TRC and in turn, move along a bit quicker, but we never found ourselves stuck looking for a different route up. A climb up over some small logs also showed that the coil-sprung rear, which adds a layer of compliance uncommon in utes, helped keep the tyres in contact on the ground rather than tending toward being rigid. 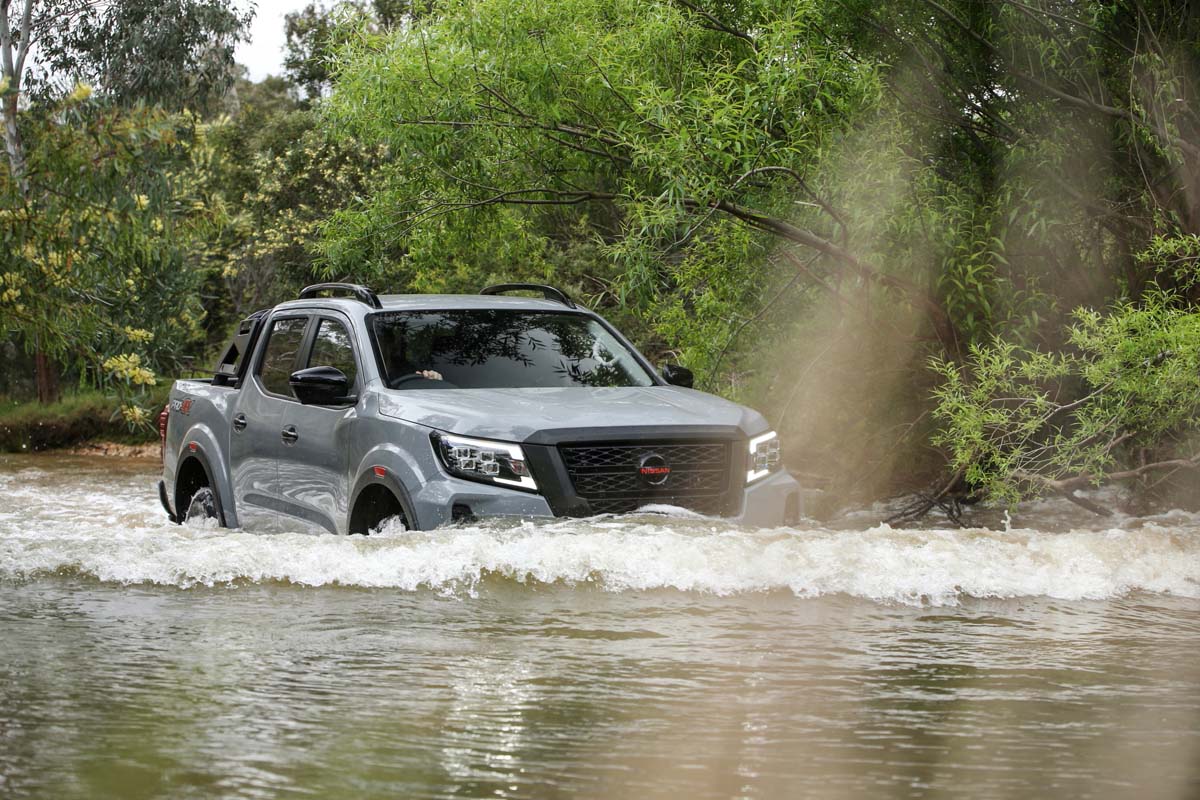 Through various water crossings, traction and stability were fine, too, with a steady slow pace creating a nice bow wave in front. The most demanding crossing we had was the 600mm pond (matching the Navara’s 600mm wading depth without the Nissan snorkel accessory fitted) and up a steep but well-packed gravel exit. Once coming out of the slightly muddy base, we had no issue with traction.

The 224mm ground clearance is the limiting factor once the tracks get gnarly, though this is about the point when the PRO-4X Warrior steps in, with an additional lift and much more capable tyres. 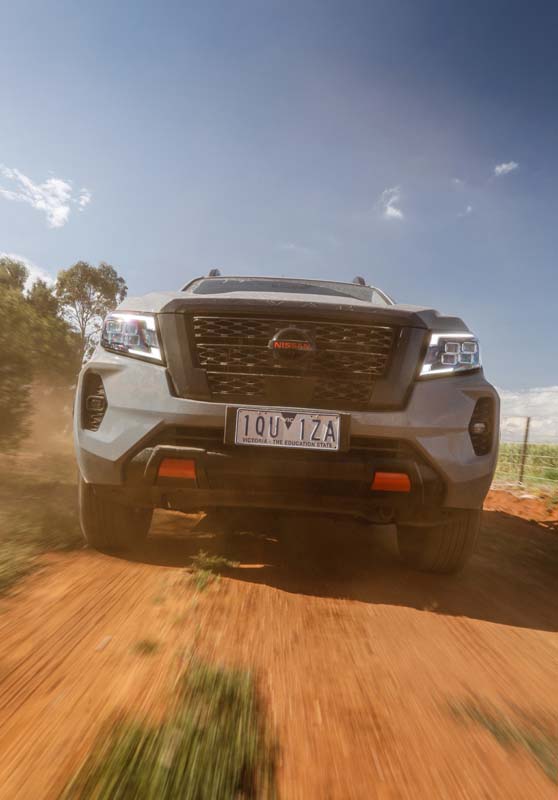 That said, on what can be a tricky course that caught us out sometimes, we failed to get stuck. Even when ploughing through a 500mm deep mud hole where we did stop moving forward… the Navara shifted itself out backwards without much fuss and onwards we went. 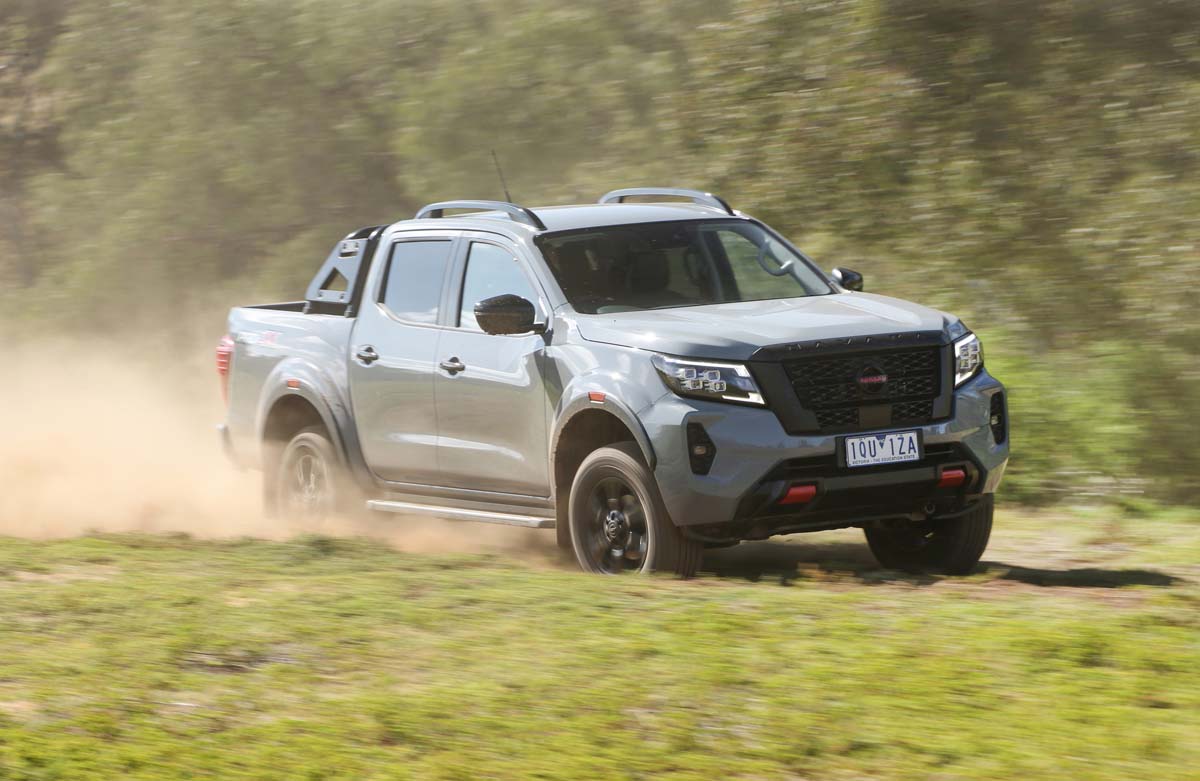 The Australian dual cab ute market is one of the most crowded and competitive in the country, with premium offerings – call them “performance” or “extreme” if you like – being the new battleground.

Along with the PRO-4X, Nissan have brought an extra weapon to the fight, launching the Navara PRO-4X Warrior in September.

Developed in partnership with Melbourne-based Premcar, the PRO-4X Warrior is priced from $67,490. For that sizeable price premium over the PRO-4X, the Warrior adds a winch-capable and lightbar-equipped bullbar, unique towbar, increased ground clearance and improved approach angle, a wider track, more aggressive tyres, additional underbody protection and revised suspension, with Warrior identification inside and out.

As impressive as some of its specs are for off-roading applications, the PRO-4X Warrior is less versatile and less usable day-to-day – a full-time warrior to the PRO-4X’s weekend warrior, if you will.

As a weekend warrior, the PRO-4X is a solid choice, with a nice interior that has good comfortable seating and most of the mod cons you’d want. It is also safer than before and AEB brings it in line with some other utes.

About all that was missing for us is a 12-volt plug in the tray for a camping fridge, though a cable could be passed through the rear window in a pinch.