The new MU-X is here, but does it meet expectations in a higher price bracket?

Isuzu’s new MU-X arrives as car sales take off and so do prices; used and new, manufacturers and dealers are pushing past the old norm. Isuzu is no stranger to increasing prices, releasing the new generation D-Max not that long ago with a notch up. 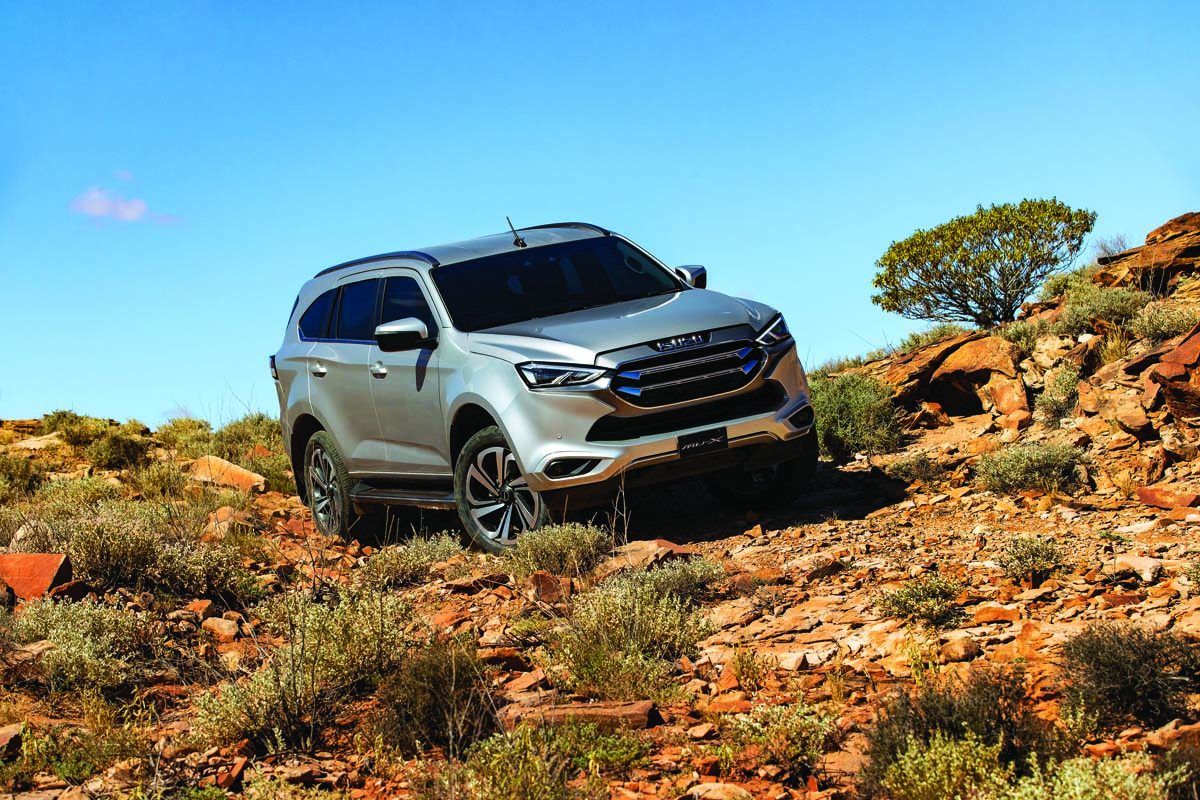 The same shift upmarket has been applied to the MU-X - prices have risen by around $4,000 to $10,000, depending on which of the three trims you shop for. The top-spec LS-T is the most affected – sort of. 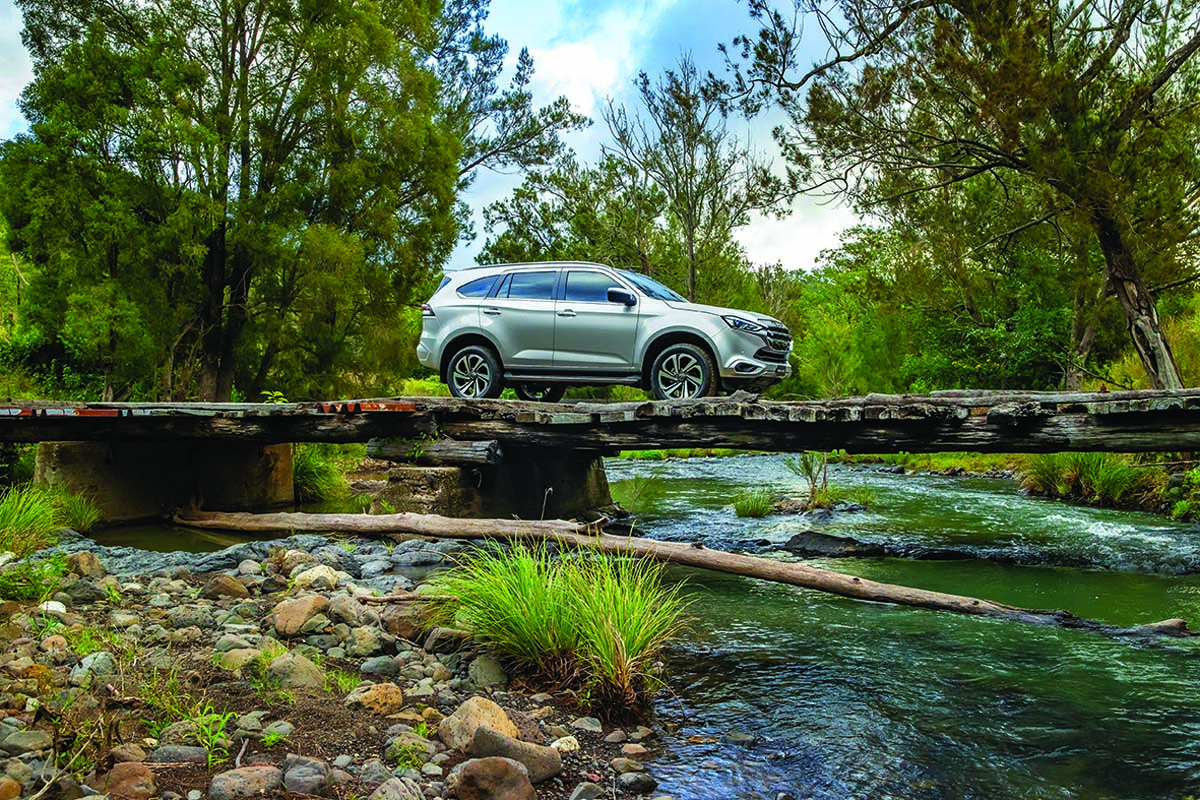 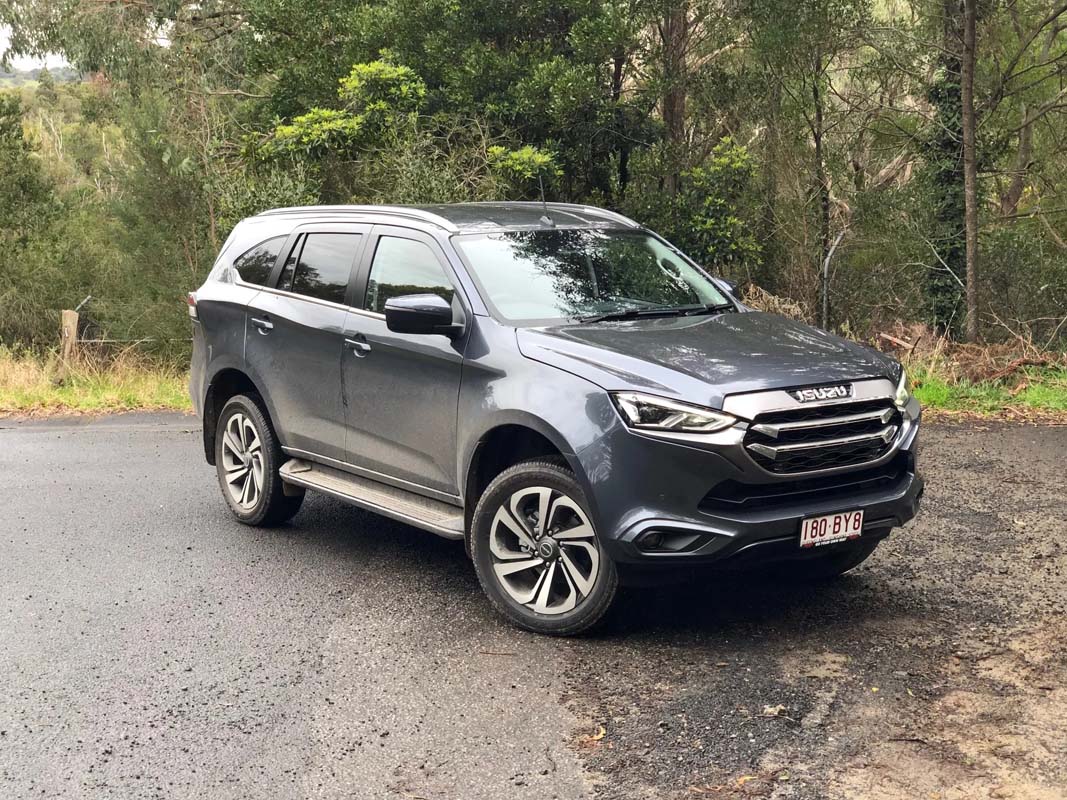 For comparison’s sake, the top-spec Ford Everest Titanium costs $73,190 plus on-roads. It’s obvious that Isuzu wants a little more of the cream in what is a relatively popular segment, and the best place to get it is at the top end where prices begin to soar. 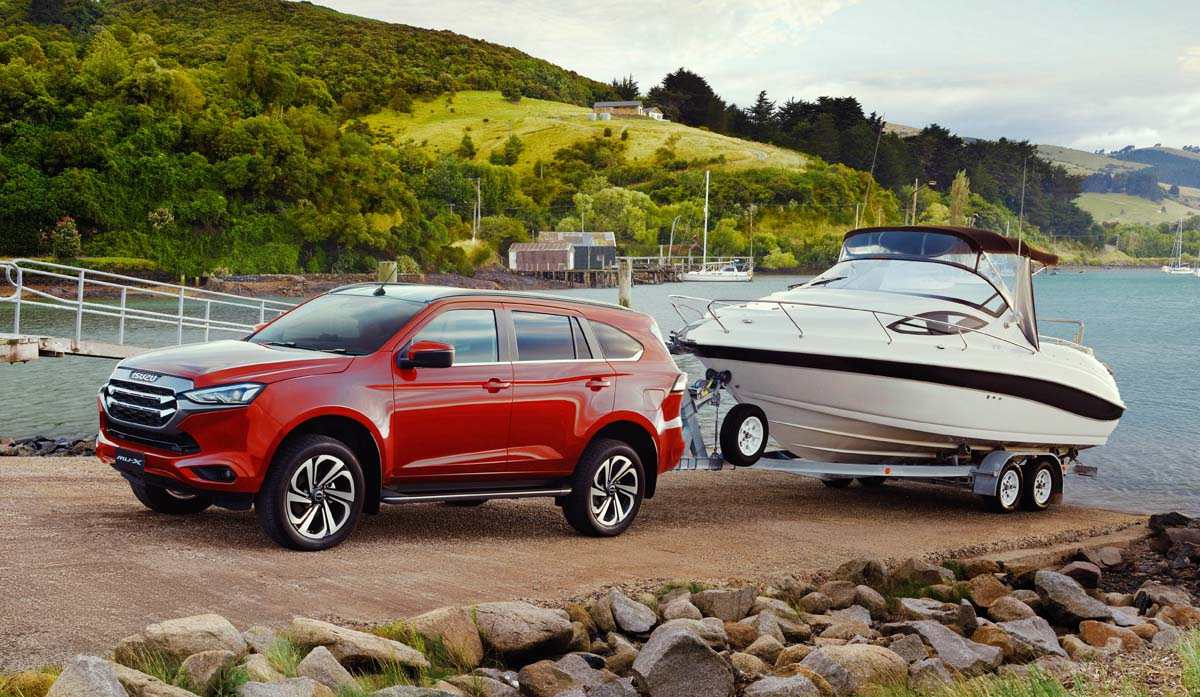 Justifying this price hike from Isuzu is what the Japanese maker calls a move upmarket. It was first seen with the D-Max and most of that comes from new safety technology and equipment. As it’s based on the D-Max, the MU-X has the same drivetrain options, the same standard rear mechanical differential for 4×4 models, and a full suite of modern safety gear that scores a five-star ANCAP rating. 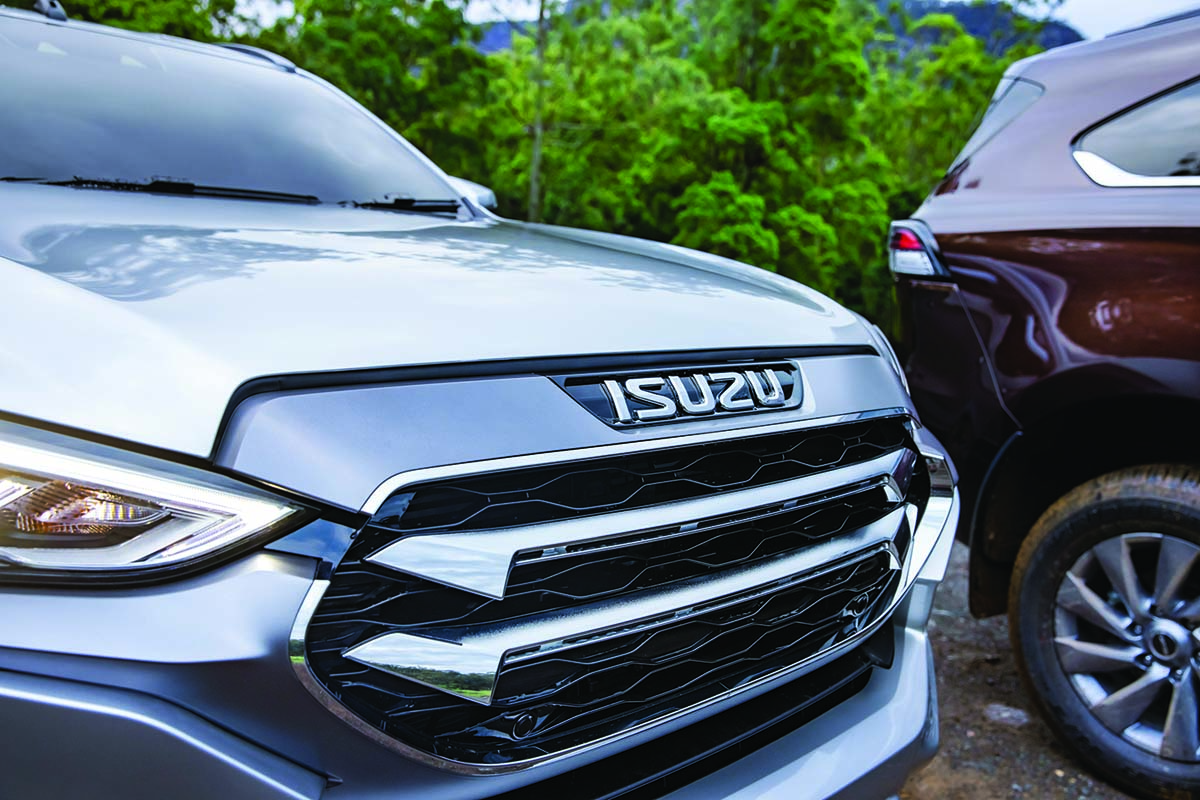 The 3.0-litre turbo diesel continues with 140kW and 450Nm through a six-speed torque converter automatic transmission. Those are not stellar figures in comparison to a rival like the Everest with 157kW and 500Nm coming from its 2.0L turbo diesel four-pot. But with Everest weighing 2477kg and the MU-X LS-T just 2175kg, the performance deficit isn’t what you think it is. In the real world, the MU-X shifts off the line in a timely manner and climbs through its six gears at a steady rate. Fuel consumption is a claimed 8.3L/100km on the government combined cycle but we didn’t dip below 10L in our low-kay test vehicle. We’d expect a run-in model to do better. 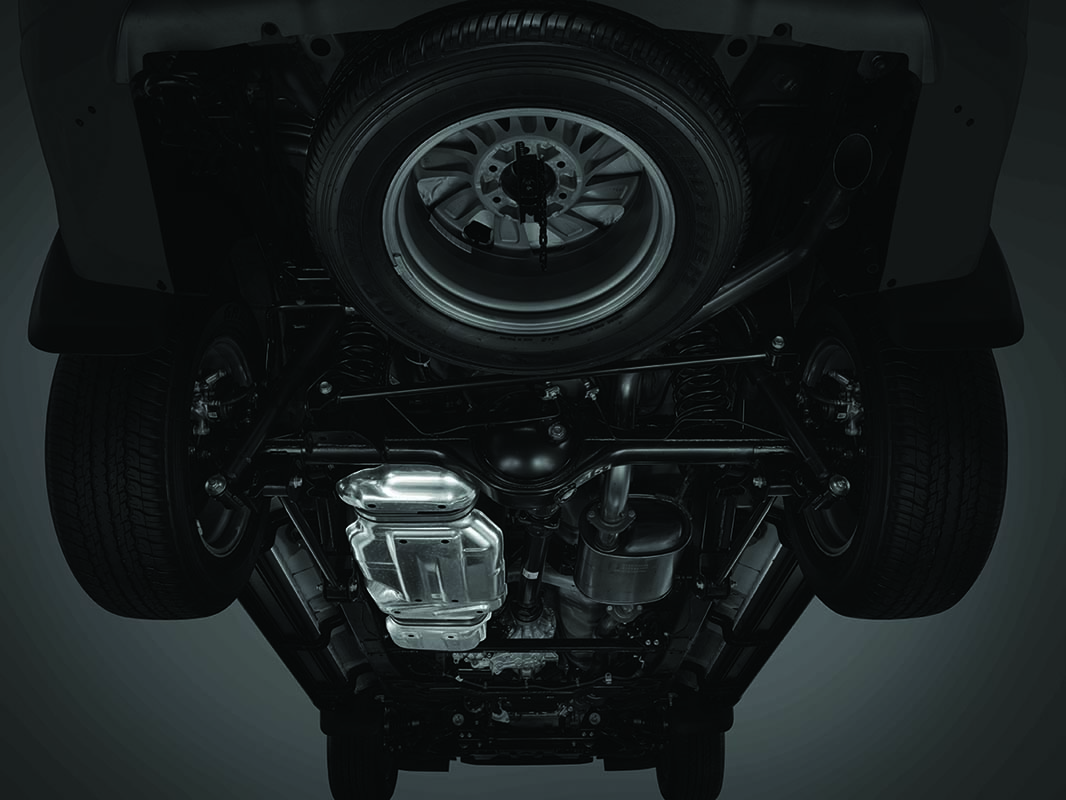 Steering is lightweight, which is good for low speed moving in the city but it lacks the precision of a monocoque SUV, a symptom of both the sturdy ladder-frame chassis and electrically-assisted rack for the automated steering assist (the car turns back into its lane without steering input if you get too close to marked lines). These ute-based four-wheel-drive wagons are not intended as nimble town cars though – even if they pretend to be with this upmarket push – so it is in the bush or touring along Australian roads where they need to cut the mustard. 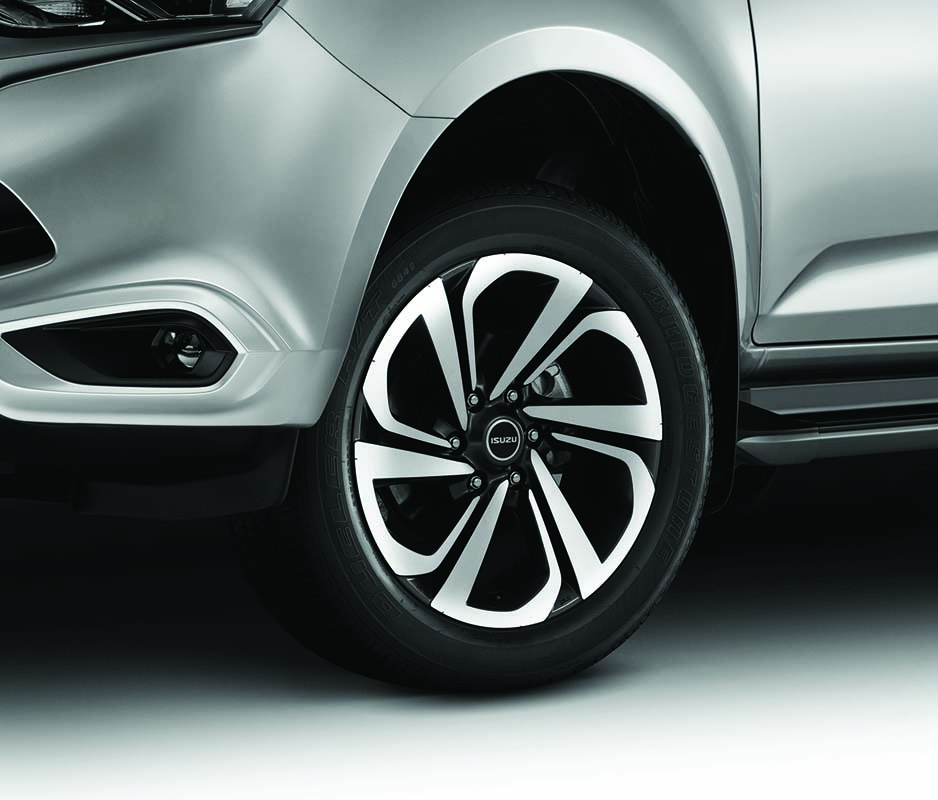 Isuzu’s D-Max ute uses a three or five-leaf rear suspension arrangement in its line-up while the MU-X has a five-link coil suspension setup that’s even softer. It goes for compliance where the ute prefers payload, is noticeably better on poor town roads and works without as much fuss over bumps, though it is a touch noisy on coarse chip surfaces. 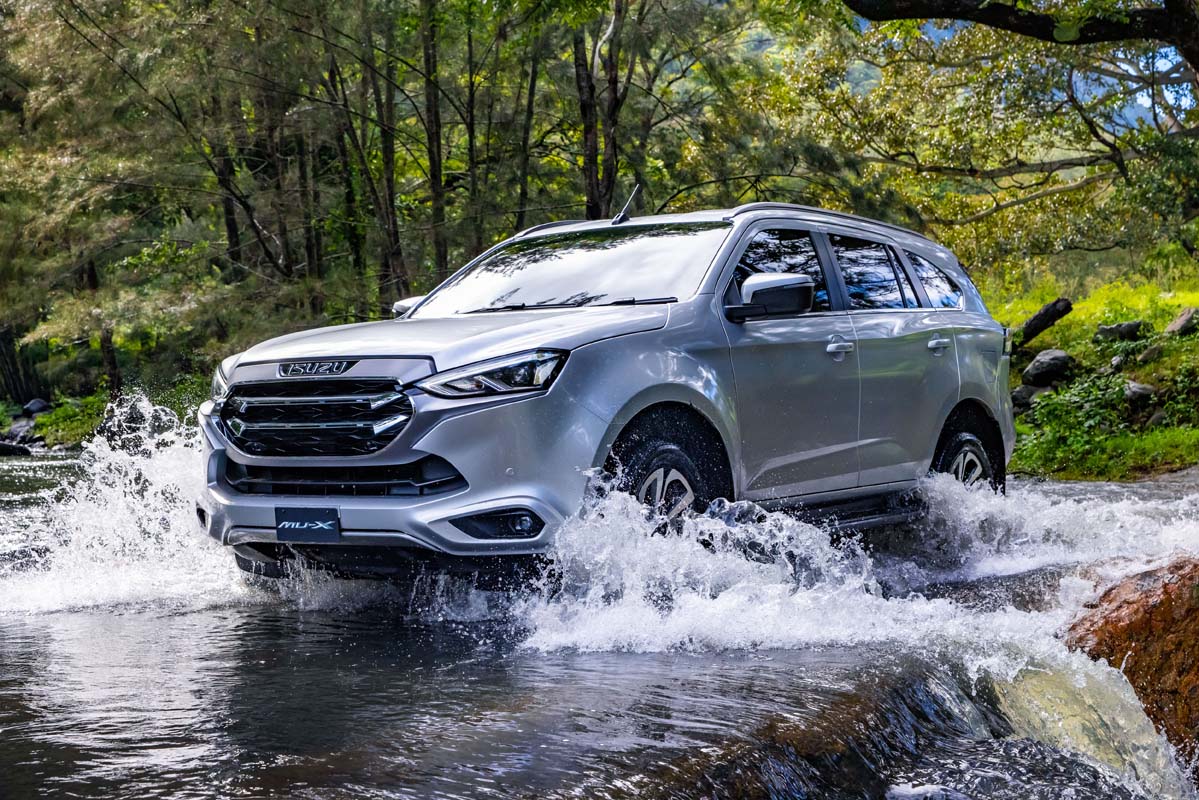 The MU-X’s articulation is somewhat limited, but ground clearance of 235mm is useable on most intermediate four-wheel drive tracks for a wagon. The 29.2-degree approach angle, 32.1 breakover and 26.4-degree departure angles are improvements on the old MU-X, too, though it is the standard rear differential that helps most for traction. 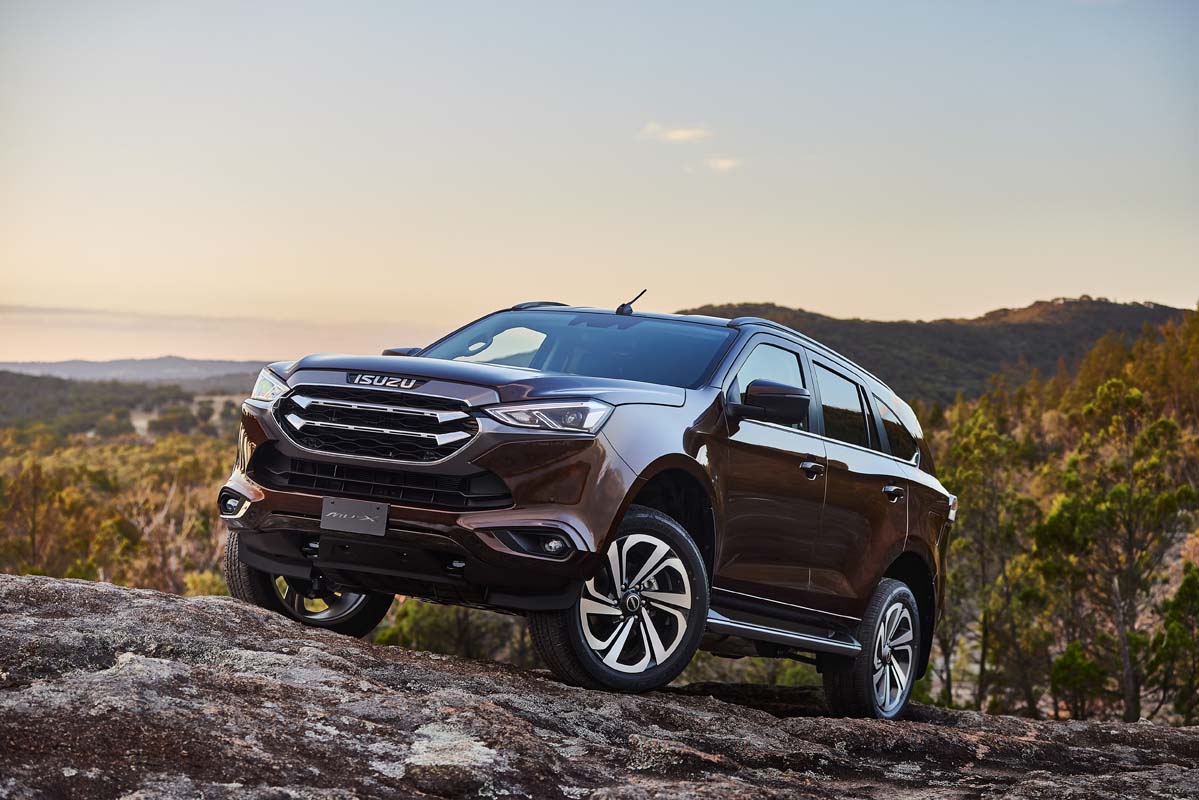 Isuzu’s four-wheel-drive system offers only part-time four-high, so you must drive in two-wheel drive on high traction surfaces, though four-high can be shifted into on the fly and at speeds up to 100km/h. It works well on gravel and helps bring front-end grip when the surface is loose. Shifting into four-low requires being stationary and operates only at a crawl. Like in the ute, off-road traction control has been improved and so it is better at getting torque quickly to wheels with useable grip and leads to less time bogging down in mud or deep ruts and corrugations. Wading depth is 800mm, and there are a variety of accessories available, including snorkels and front bars, to help protect the engine on deep crossings. 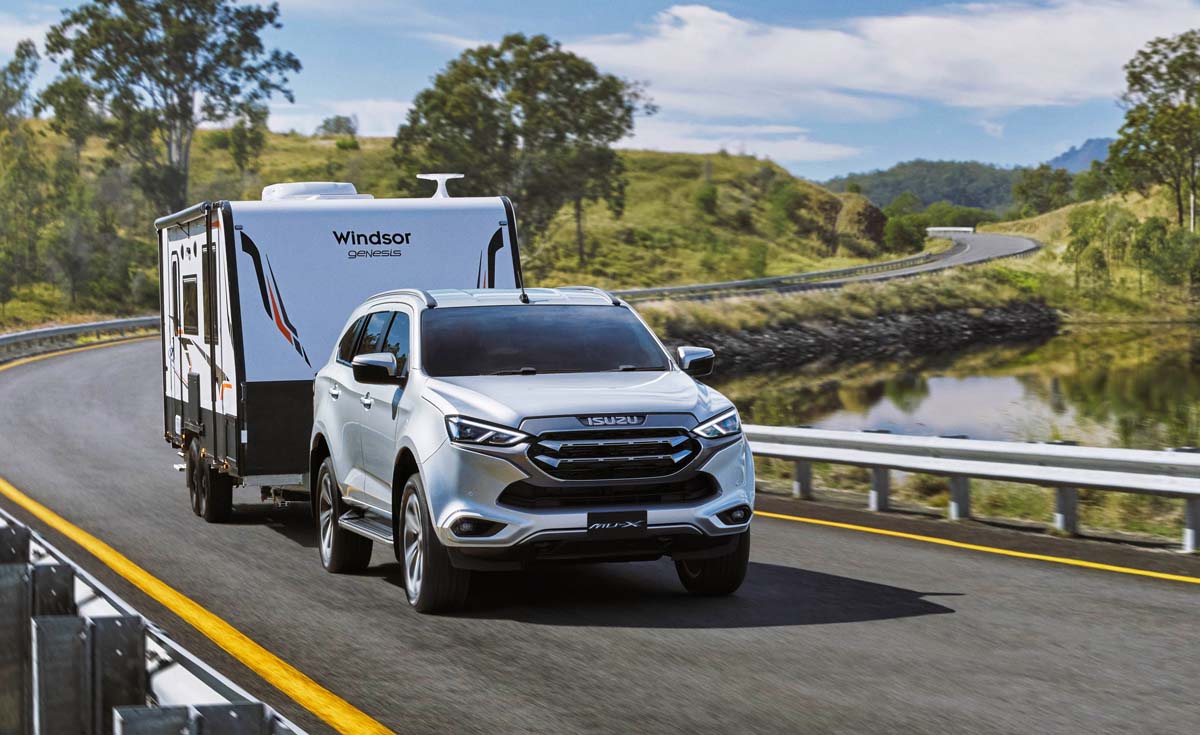 We did not tow on this test, but the braked towing capacity has been increased to 3500kg with 350kg tow ball mass across the board on all MU-X models. The limiting factor is that a gross combination mass (GCM) of 5900kg means that the 2175kg flagship LS-T when towing 3500kg is left with a 225kg payload for people and equipment, including any fluids or accessories, such as a bullbar - a fairly unworkable scenario. A 2500-3500kg towing load brings a safer 375-325kg payload thanks to a boost in GVM.

As a seven-seater, such scenarios may need some proper thinking, but the news inside is good for occupants. 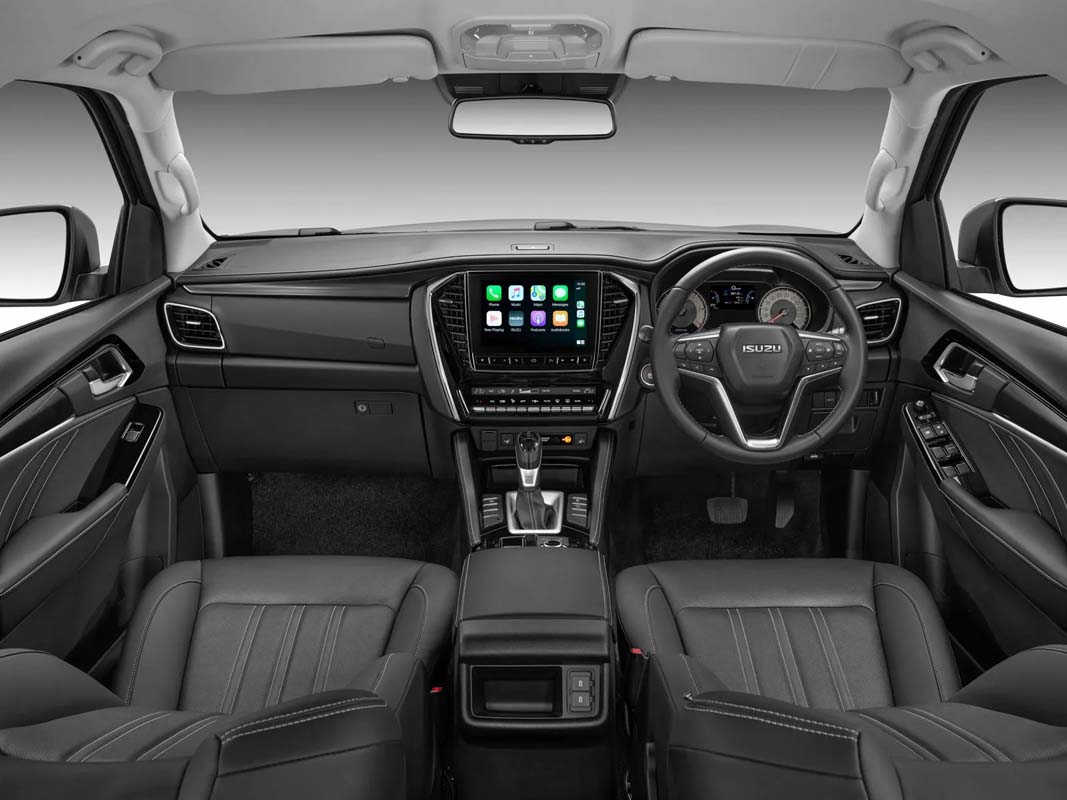 The LS-T’s leather upholstery is as nice as you’d find in this segment and the bolstering on first- and second-row seats is good; if you’re familiar with the D-Max the cabin layout is mostly the same. 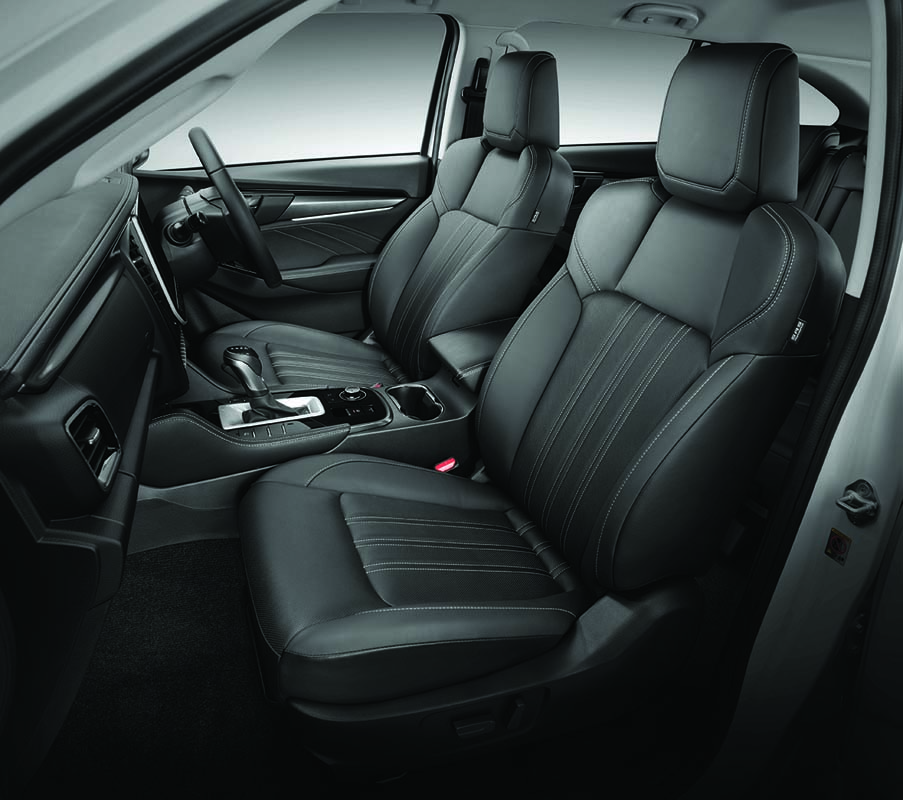 The new MU-X’s third-row seating has a longer footwell space than before and slightly easier ingress, although it’s still compact back there. The second row is better and a rear-facing baby capsule fits in with just enough space for the front seats to be slid back to a position that’s comfortable for a six-foot-tall person. Air ventilation in the rear two rows is through the roof which works quite well and temperature can be controlled both upfront and from the second row. 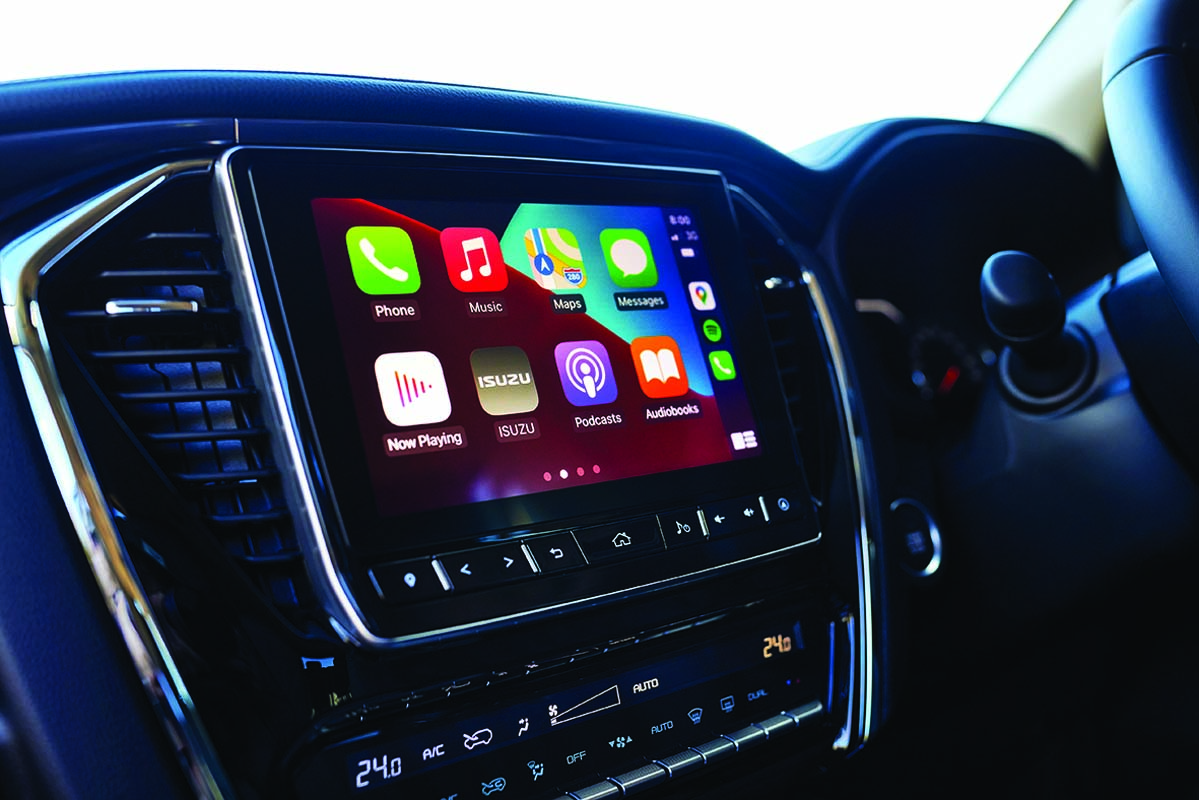 On the tech front, standard equipment includes a 9.0-inch touchscreen that’s a drastic improvement on the old MU-X. It has wireless Apple CarPlay and wired Android Auto connectivity, which you would want to use as the stock system isn’t pretty. There is a depth of configurations and plenty of settings though, and it has a sat-nav built in. The driver also gets a 7.0-inch digital instrument screen for showing things like the digital speedo and active safety systems. 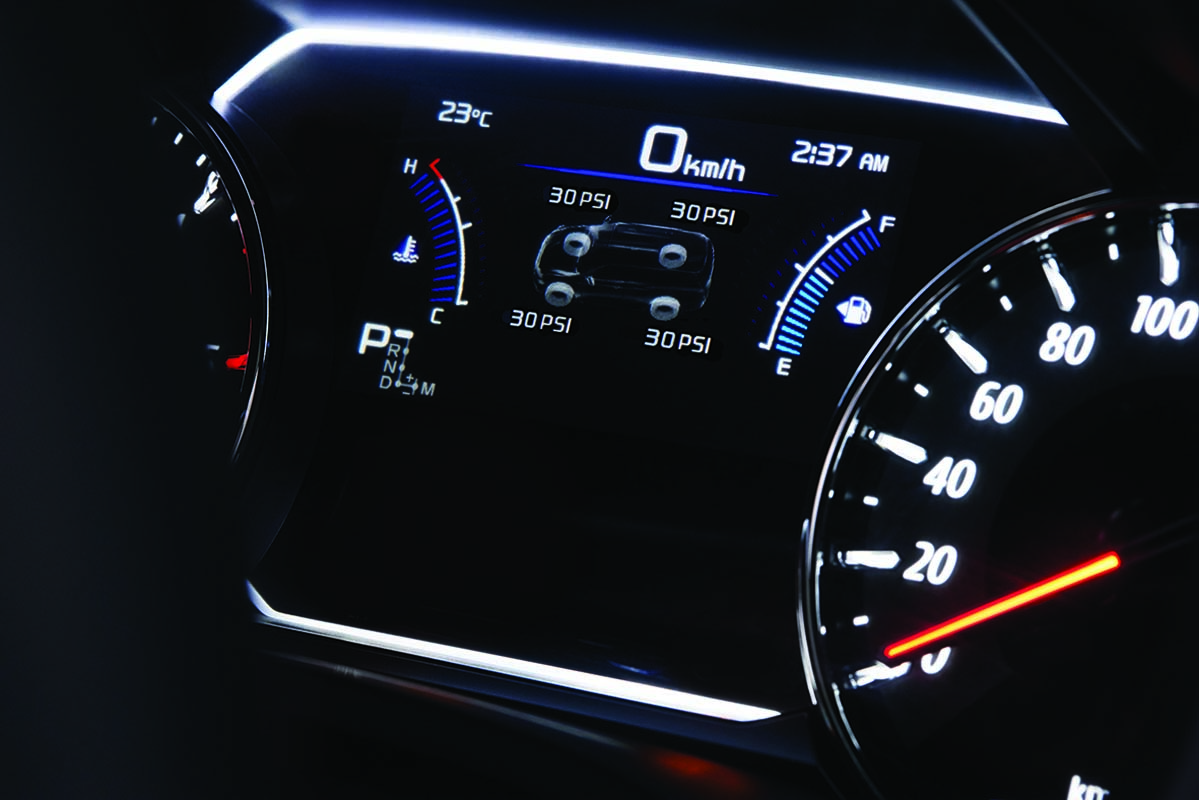 For some reason, every time we test an Isuzu the remaining driving range isn’t visible anywhere, but this is something that can be shown permanently by putting the vehicle in park and accessing the settings screen to customise up to three fixed information displays across the top of the instrument screen. 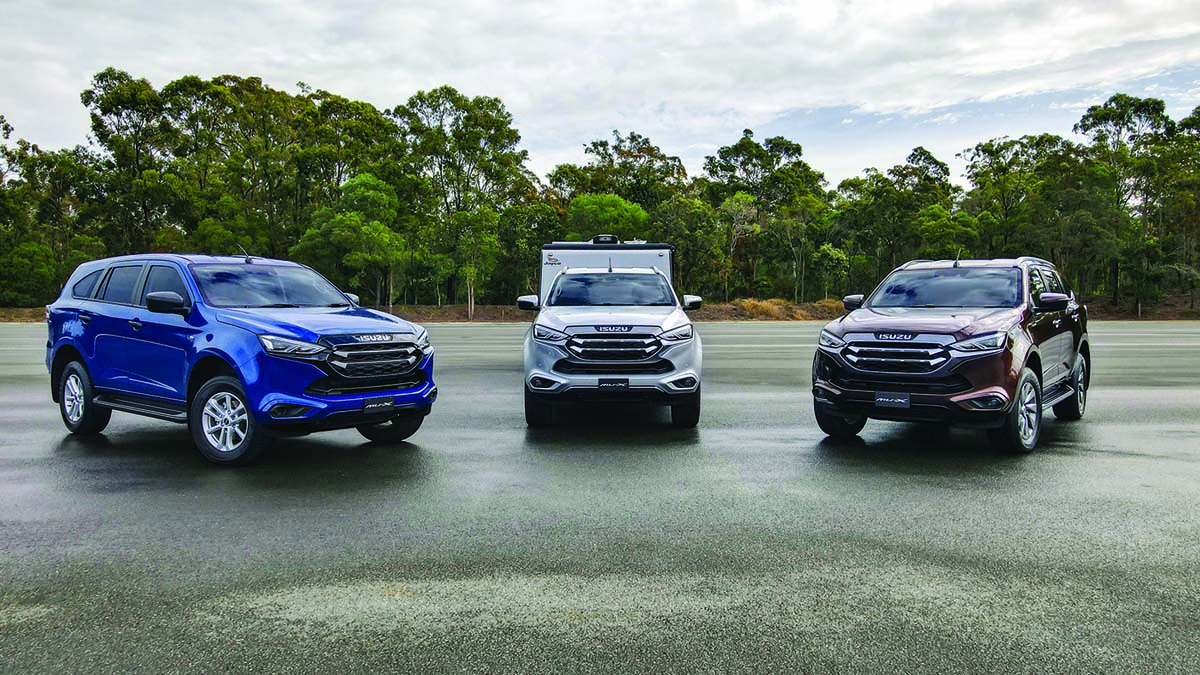 For those pottering about the city exclusively, one wonders why any ute-based wagon would be picked over something like a large SUV (Toyota Kluger, Mazda CX-9, Kia Sorento, Hyundai Santa Fe, etc), but for towing, touring, off-roading and getting out and about, the new Isuzu MU-X is more comfortable than before, comprehensively safer and also fit for purpose.