The car industry loves to brandish something as all-new. So trigger happy are some manufacturers that merely updating the styling or changing a few interior trims constitutes fanfare. However, not Hyundai. While the Santa Fe now rides on a new platform, one shared with the Kia Sorrento, gains a next generation engine and an overhauled cabin, the South Korean’s are resisting the urge to call it all-new.

What you should know is that, apart from a rather small list of carry-over items, this is a big step forward. Although it’s technically a mid-cycle update to the three-year-old fourth-gen Santa Fe. Yet, without giving the game away, it’s good. Very good.

Along with the just-launched Palisade, the Santa Fe forms part of a fresh-metal onslaught to release “18-models in 18 months” in an effort to completely overhaul the line-up by the end of 2021.

How much does it cost?

Four model grades (base Santa Fe, Active, Elite and Highlander), with the choice of petrol or diesel engines powering the front wheels alone (V6) or all fours in the diesel. The Active X range has been culled, and while Hyundai claims that about 50 percent of all Santa Fe sales went to Highlander, the emphasis has been placed on the well-specced Active variant.

Premium paint will set you back $695, while Cognac Brown or Camel Brown Nappa leather on Elite and Highlander is an extra $295. 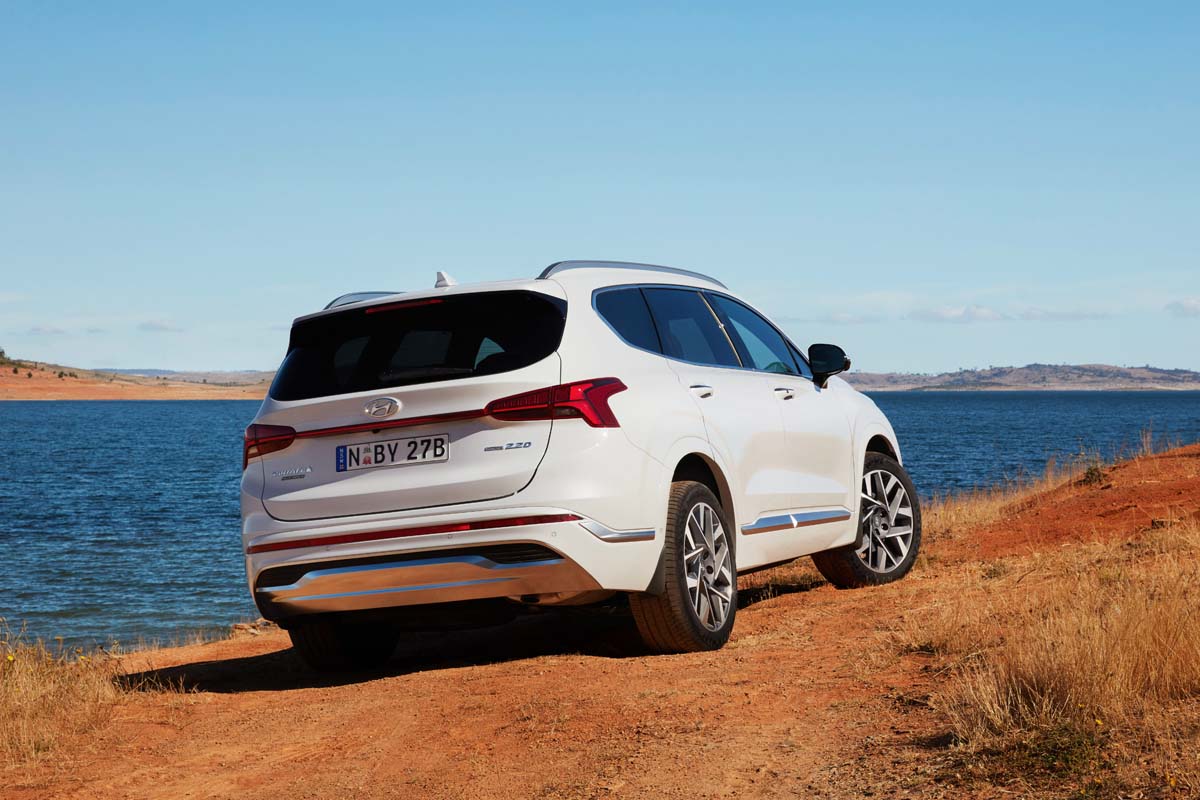 What does it cost to own?

Hyundai’s five-year, unlimited kilometre warranty covers the Santa Fe. In terms of servicing, intervals are every 12 months or 15,000km (whichever comes first), with the atmo V6 costing $399 every visit to the dealer for five years, while the turbo diesel will set you back $459 per annum for the same five-year period. Roadside assistance in the form of Hyundai iCare is available, too. 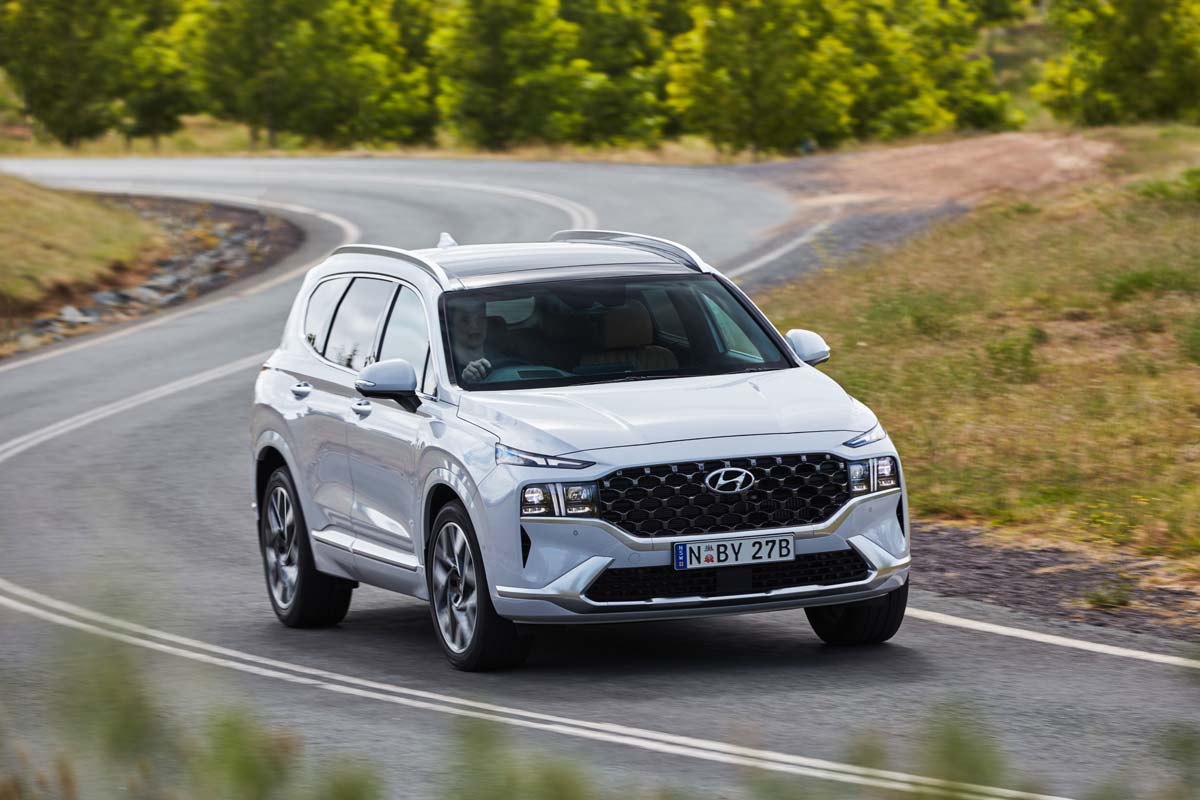 The rather frumpy earlier generations have certainly made way for a more striking, high-end design with bold styling features – especially the wide, cascading grille and straked headlight design. Strong character lines and, in a Santa Fe first on Elite and Highlander, 20-inch alloys wheels add appeal to the profile (lower grads gain 18-inch alloys). At the back there’s an in vogue connecting taillight bar to complete the “refreshed styling”. 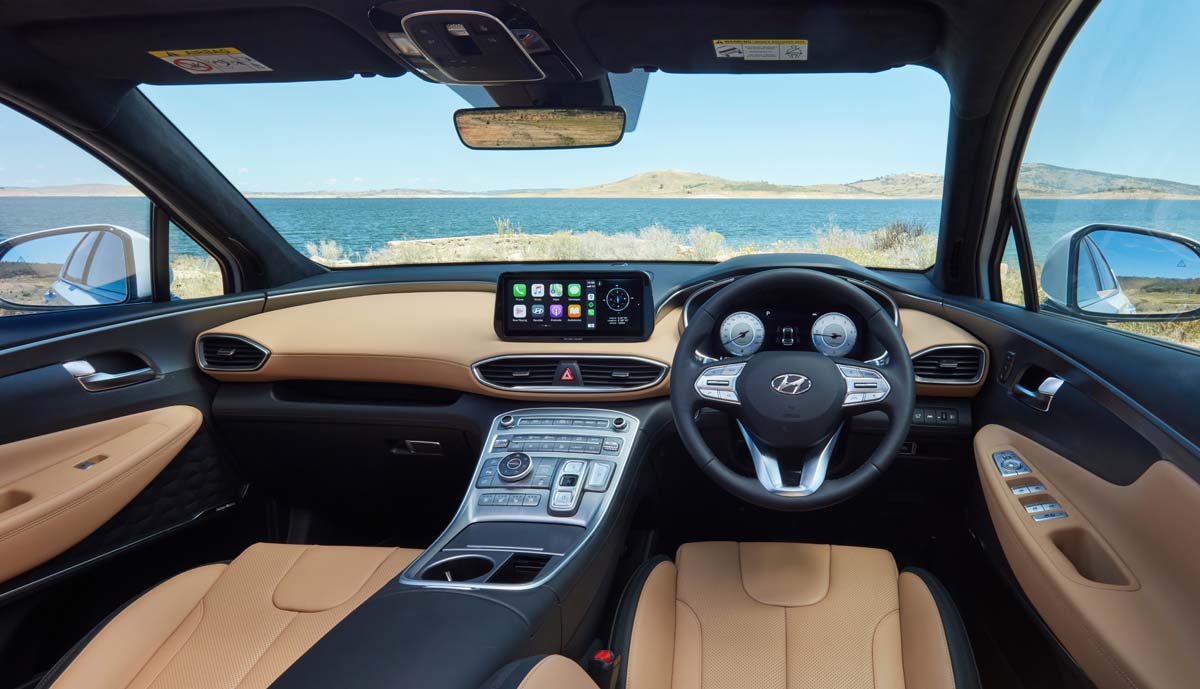 Much like the Kia Sorrento, it looks and feels a bit fancy inside as the Santa Fe has gone upmarket. A pleasing amount of soft-touch materials abound and the quality of the fit and finish feels first-rate. Although, it is curious that the drive-mode selector has been made a rather large design element given it will be seldom used. Oh, and the base model doesn’t receive an entirely updated cabin like the Active, Elite and Highlander do, carrying over the gear leaver from the pre-facelift. 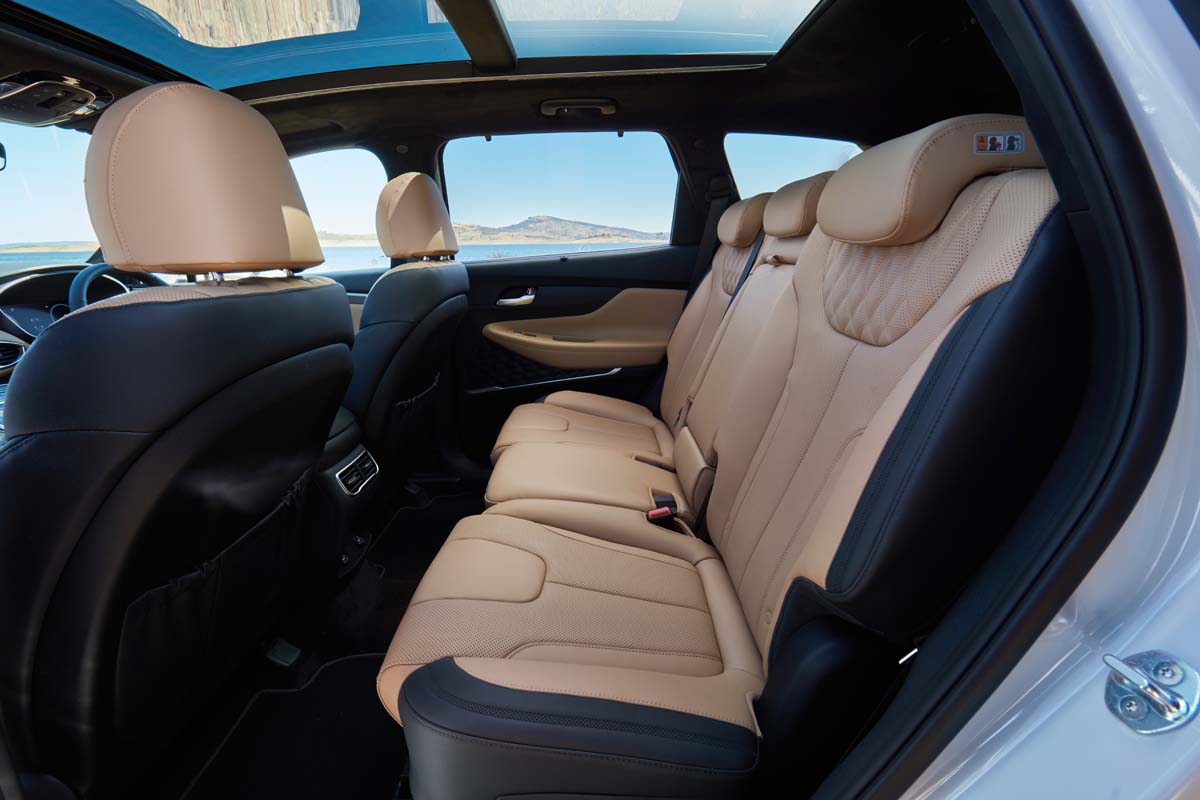 In terms of space, the Santa Fe scores well. Access to the third row is of the class norm in terms of ease, while once there, head and legroom is about what you’d expect for a seven-seat SUV. So, it’s predominately for children. The middle row slides forward and aft, meaning there’s more of a chance for all occupants to feel comfy.

Ambient lighting, in the Highlander, offers 64 different colours to choose from – which should keep the kids, big and small, entertained for a least a few minutes. If not, the Quiet mode, which cancels the rear speakers and limits volume up front, will allow for peaceful calm and sleep. It is an otherwise well-insulated cabin. 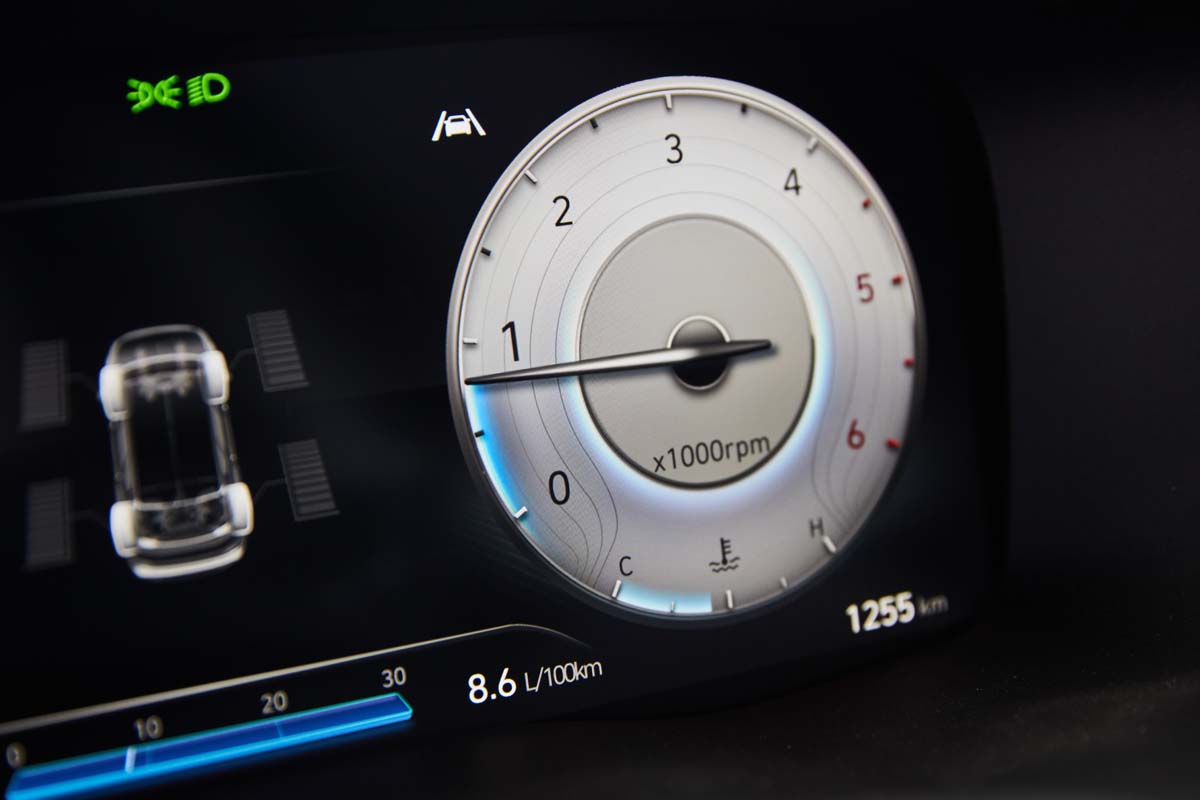 The base mode and Active gain an 8.0-inch touchscreen for the infotainment, which is intuitive and easy to use. Step up to the Elite and Highlander and the screen size grows to 10.25 inches, while DAB+ digital radio and premium Harman Kardon sound are added to the media mix. There’s a good array of USB points and charges throughout the cabin. 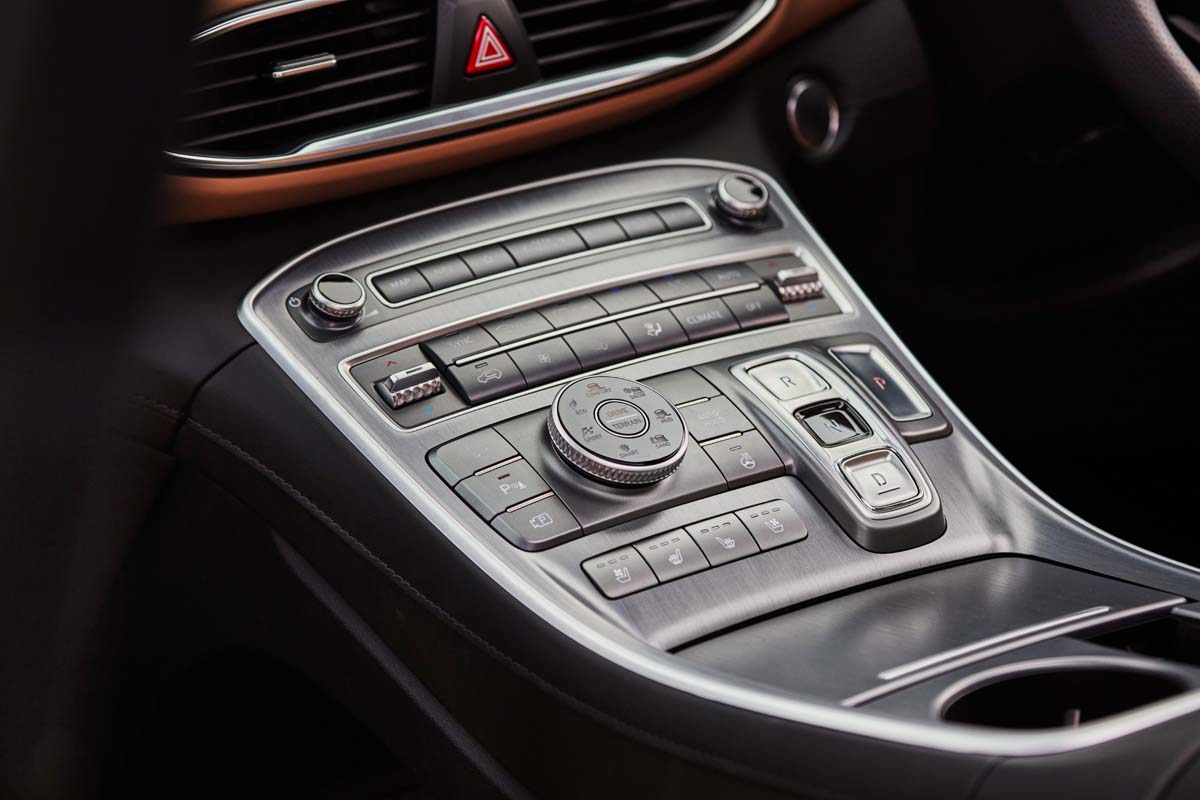 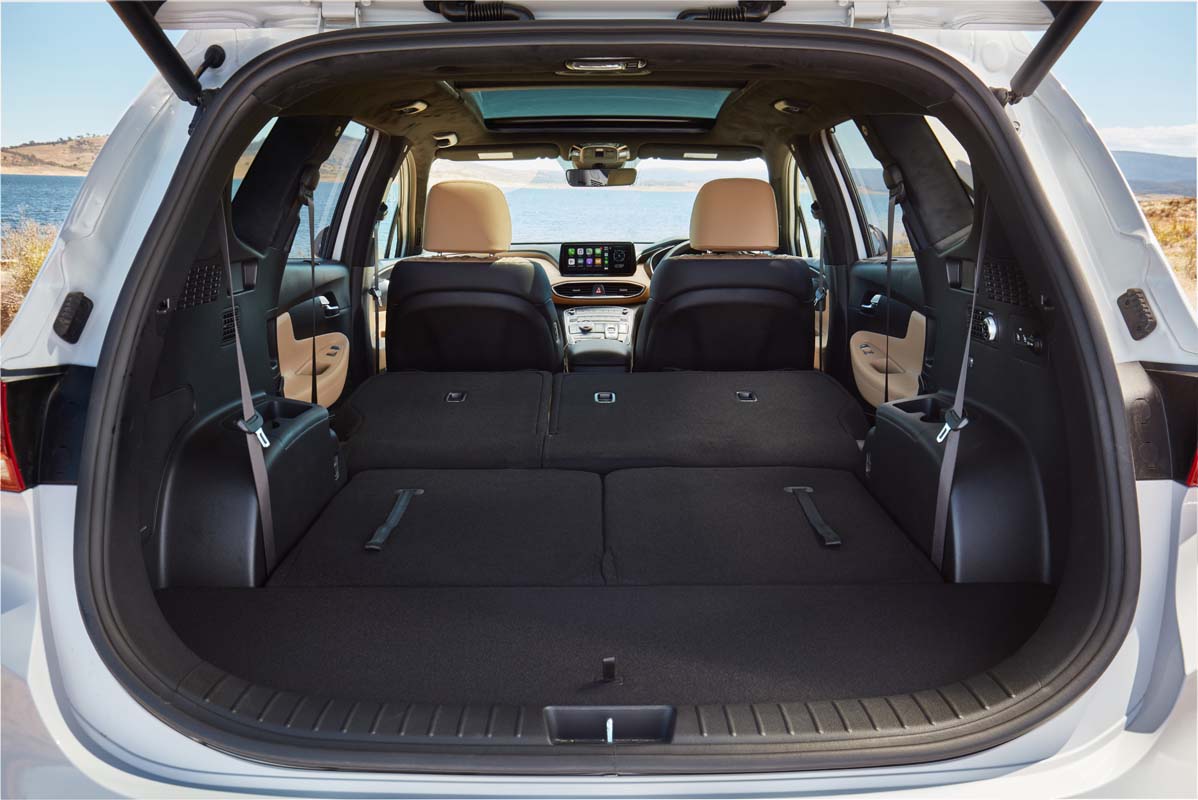 The new platform is 15mm longer, 10mm wider and 5mm taller, which liberates interior space. The middle row gains an extra 39mm of legroom, for example, and the “shift-by-wire” transmission buttons free up console space for cup holders and storage areas. 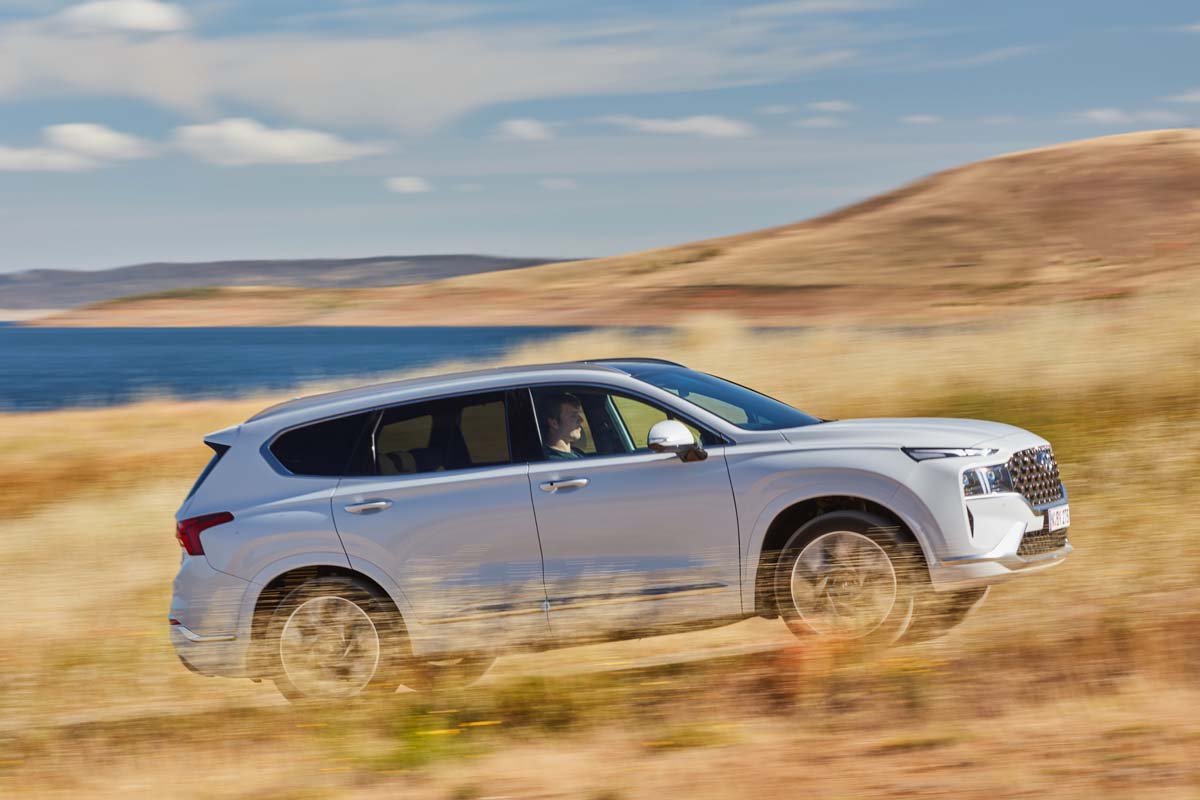 However, it’s all about the boot space in a seven-seat SUV – the rear two rows fold flat, too. With all seats in place there’s an unchanged 130-litre capacity. Drop the rearmost pews and 571-782 litres (up from 547) is available depending on the position of the middle seats (they’re on sliding rails). With all rear seats stowed 1649 litres of commodious cargo capacity is afforded. 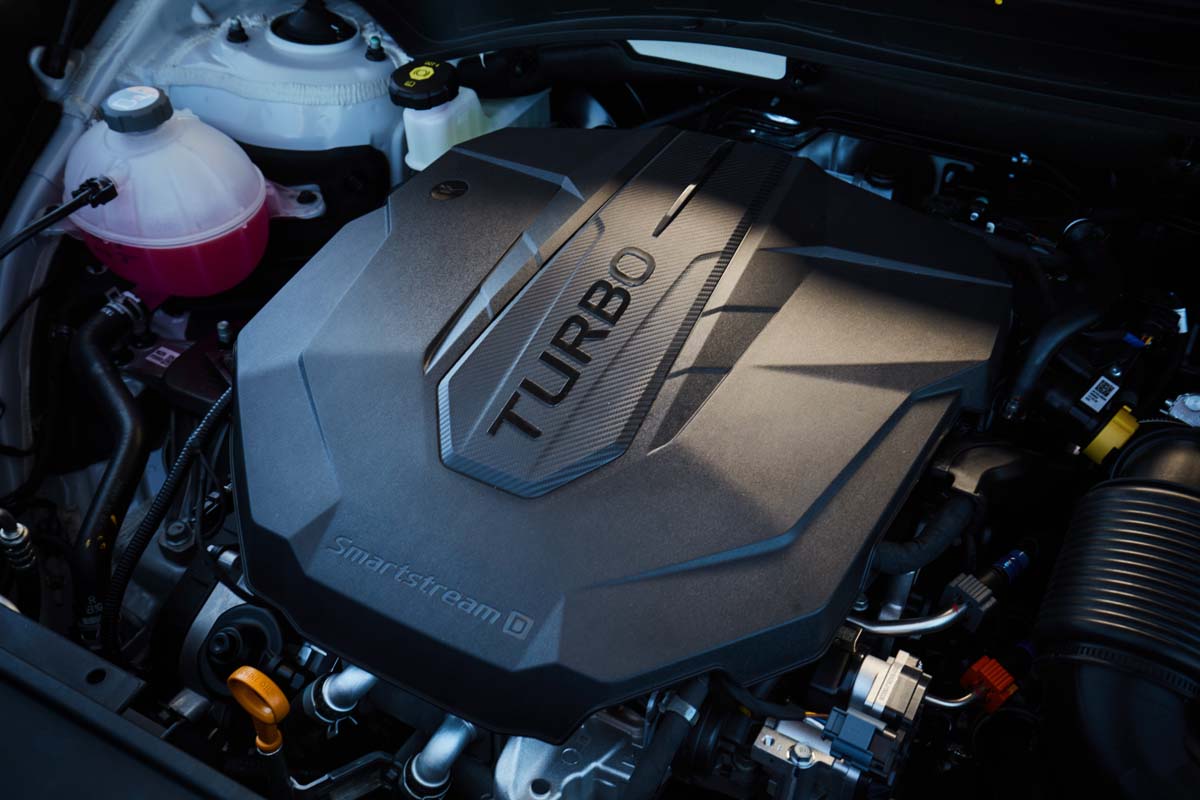 Hyundai’s new SmartStream engines are available in both petrol and diesel guises. Both have been optimised in terms of reductions in weight and internal friction losses due to the use of an alloy head and block. Mid-range power and driveability was the focus. 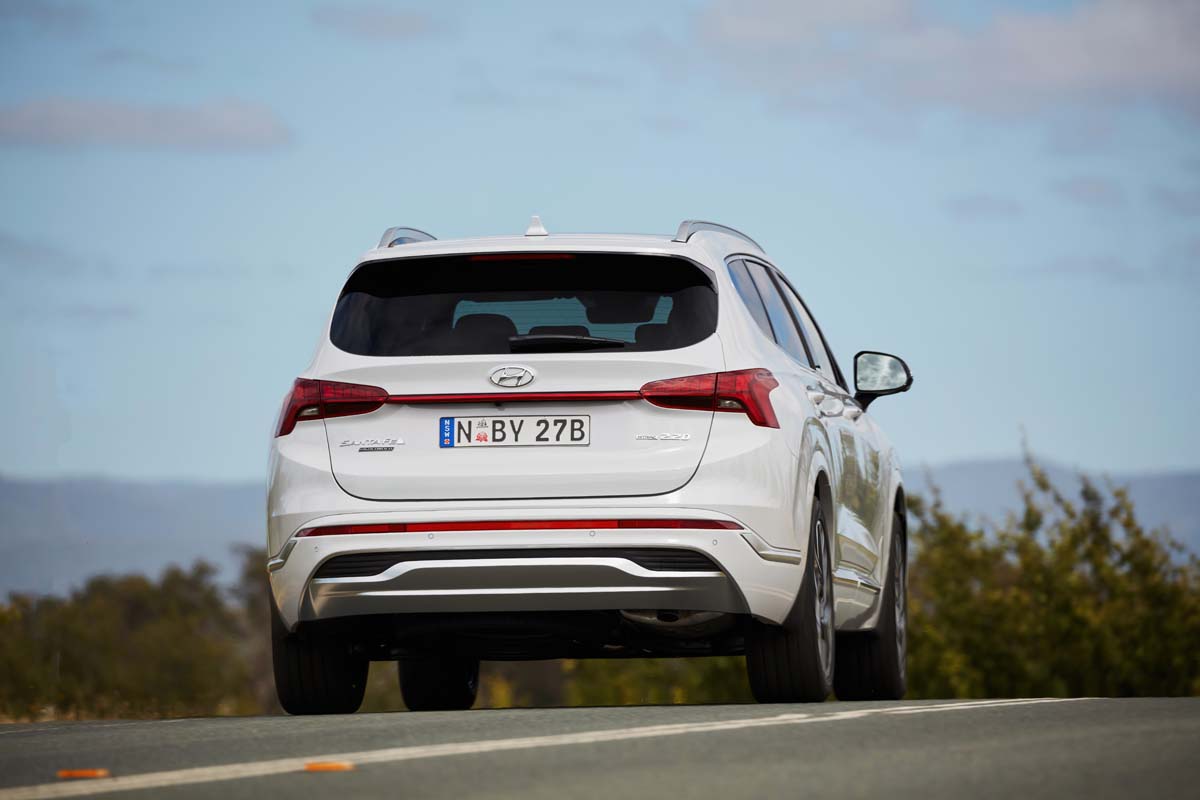 While the petrol V6 wasn’t on hand to drive, it now generates 200kW and 336Nm, which is sent to the front axle alone via an in-house eight-speed torque-converter automatic. For those with a distain for diesel it resembles a viable alternative, but a petrol-electric hybrid version is expected to land in the second half of 2021. Wait for that. 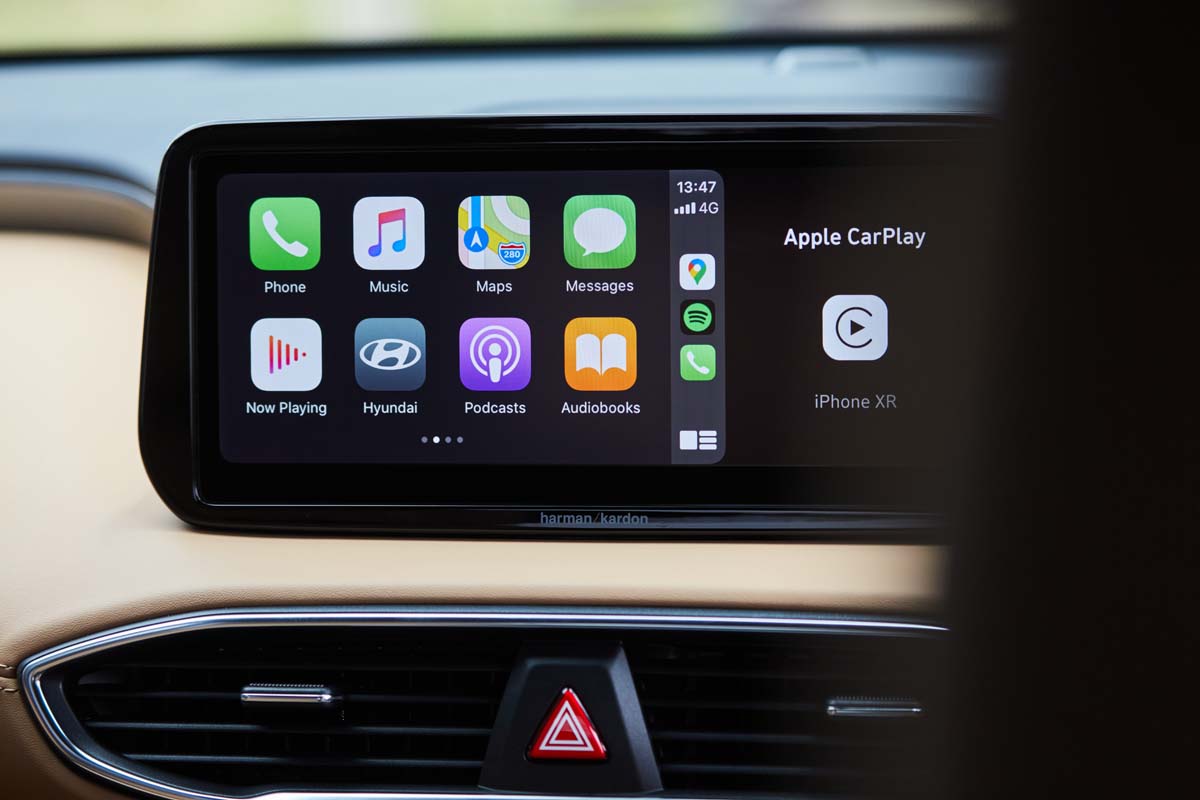 The latest R Series 2.2-litre turbo diesel four-cylinder is a strong unit with a slight bump in power to 148kW – it’s also 19kg lighter. That’s matched with a muscular 440Nm of torque, meaning there’s more than enough mid-range pulling power out on the open road – and will no doubt be useful when accessing the 2500kg braked towing capacity (shared with the V6). 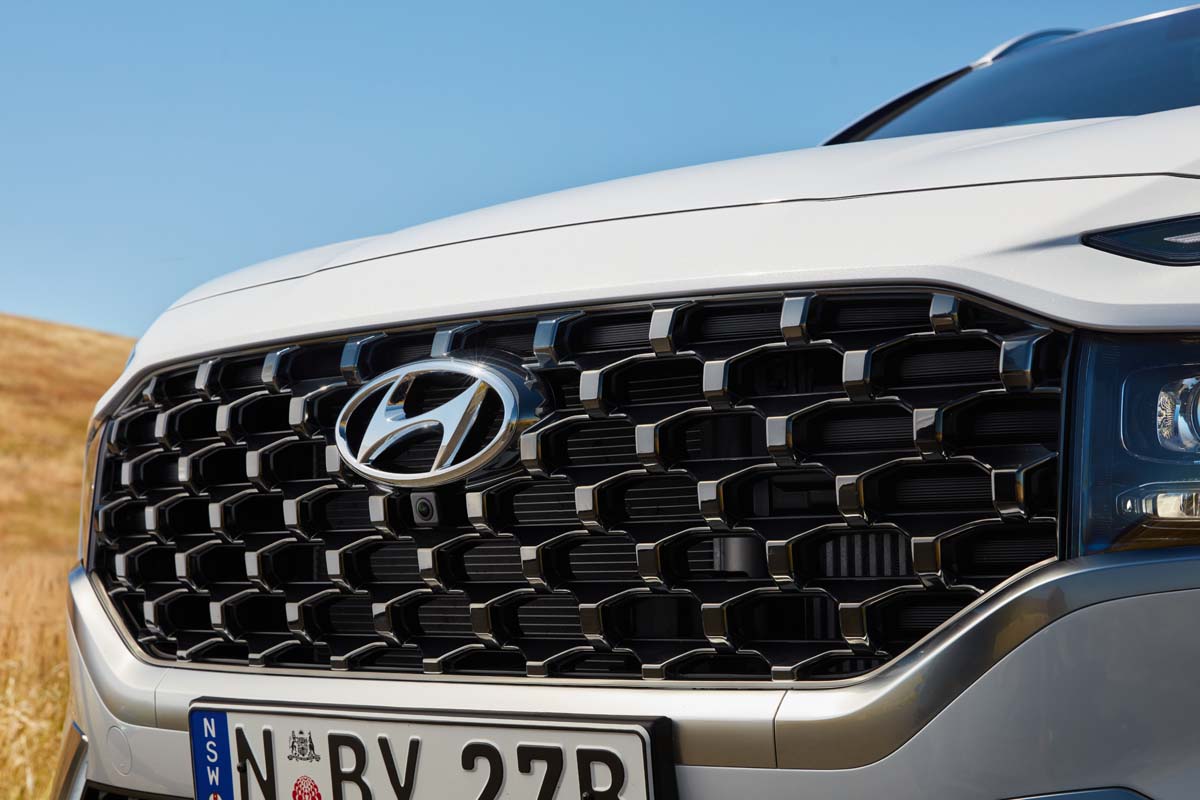 The bigger news is the addition of Hyundai’s own eight-speed dual-clutch gearbox (a variation of the one to be fitted to the i30 N hot hatch). It uses oil-submerged clutch packs, so it’s deemed a ‘wet’ gearbox, which aids cooling and NVH levels. In practice it’s a slick unit, and rarely suffers from the apparent low-speed jerkiness most DCTs are afflicted by. It’ll even rev-match on down changes, while there’s a Sport mode and steering wheel-mounted shift paddles, should the mood take you. 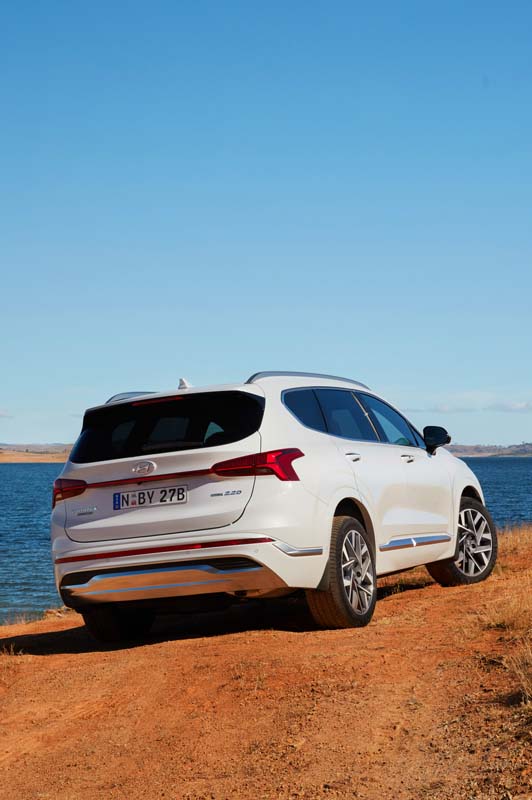 What about the fuel economy?

Both powertrains have become a little more frugal, with the V6 cutting 0.1L/100km to now state a combined consumption figure of 10.5L/100km. Hence, if bowser pain is an issue, the new diesel is the one to choose as it’s now 19 per cent more efficient (1.4L/100km) at 6.1L/100km. Figures for the upcoming hybrid are yet to be released. 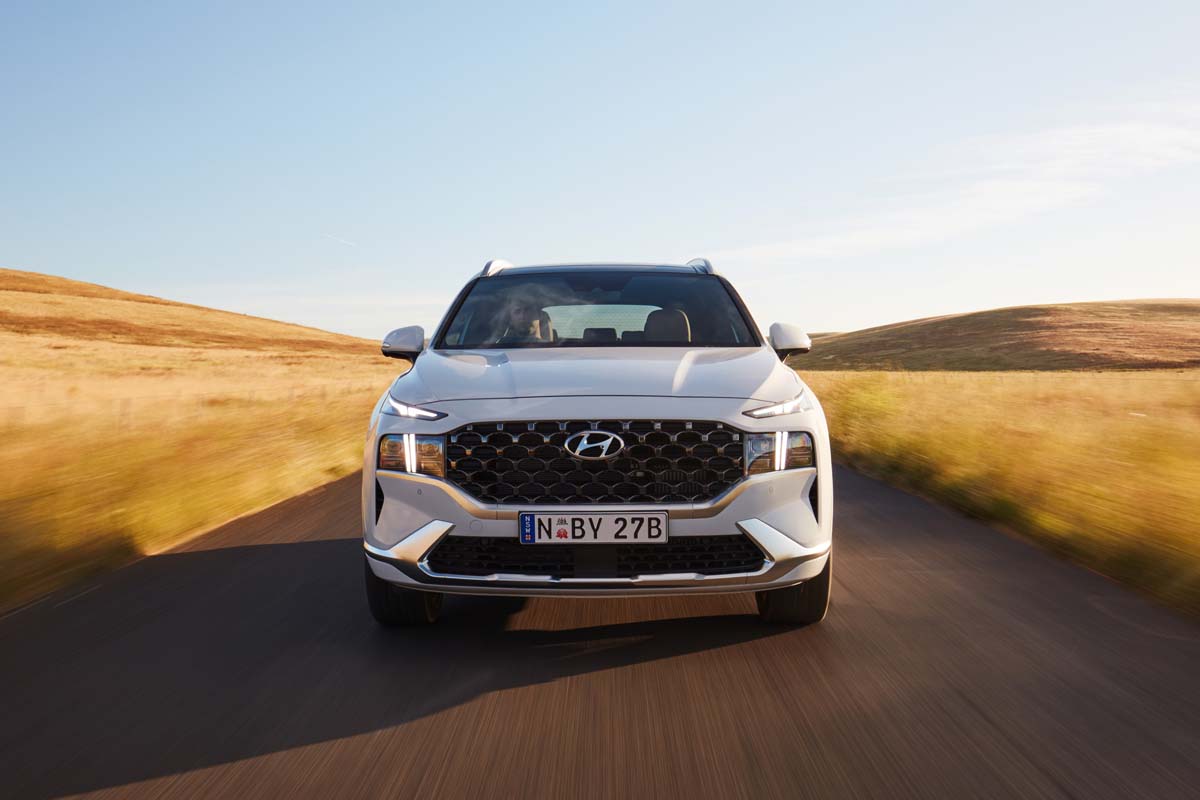 Riding on the new N3 platform (which also underpins the new Kia Sorrento), the Santa Fe marries confidence-inspiring dynamics with enough comfort for daily use. Okay, the latter is slightly called into question on really rough tarmac with the bigger 20-inch wheels, but by and large, the ride quality is impressive. And so is the body control due to the monocoque construction. 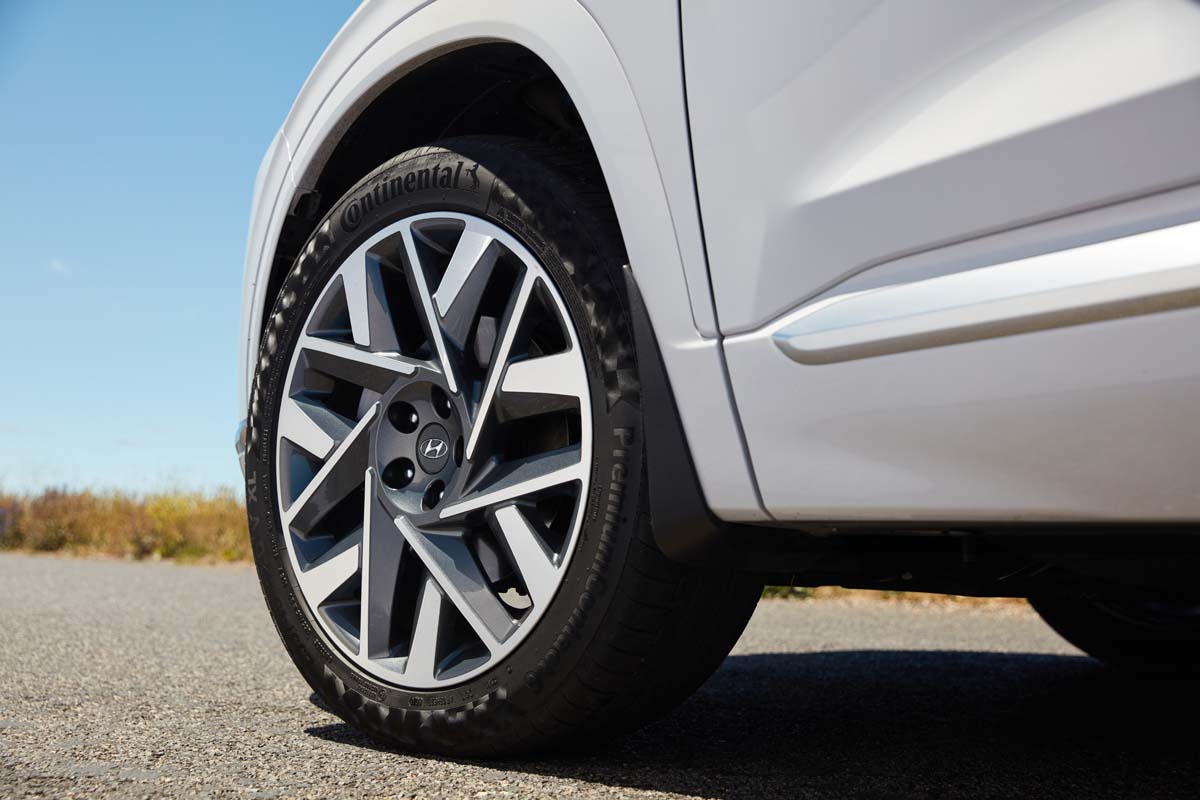 All the key controls, like the steering and brakes, perform well and in line with a sorted seven-seat SUV. Road noise and general NVH is well suppressed for a long, rectangular cabin. The implementation of the HTRAC all-wheel-drive system means you can go off-road, there are three terrain modes to choose from, but most owners won’t. We traversed smooth-to-gravely roads and found the diesel offered plenty of grip and reassurance.

Unfortunately, no FWD petrol V6s were available at launch, however, previous exposure leads us to believe the AWD diesel is the variant you want for the increased traction and better fuel economy. 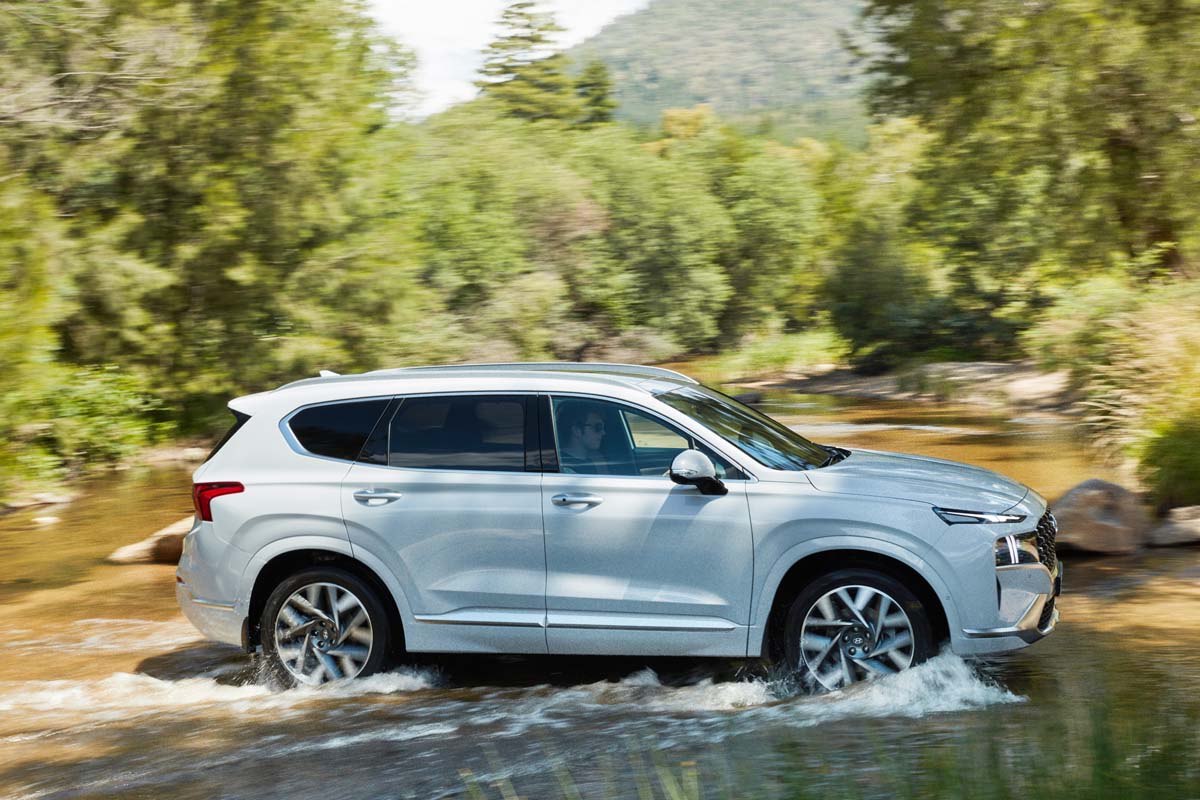 How safe is the Santa Fe? 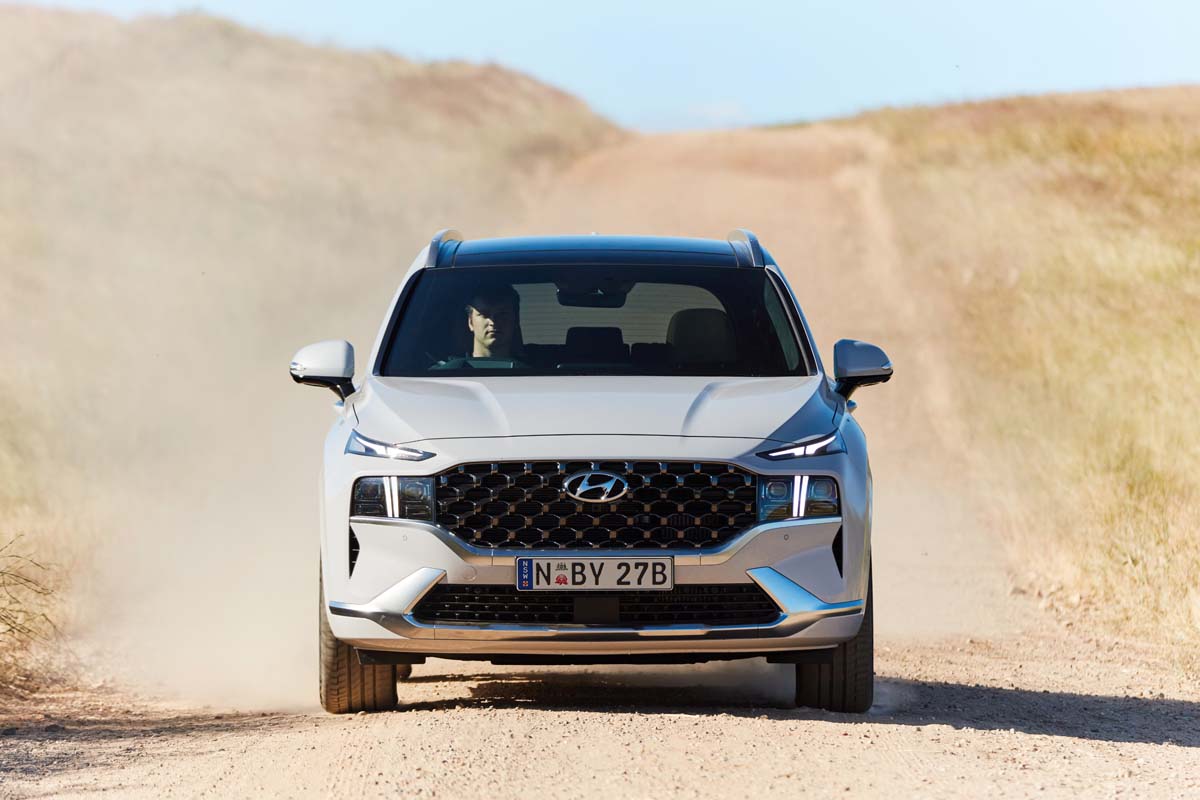 Naturally, the Kia Sorrento has to be on this list. And it’s an SUV that’s launched to critical acclaim – for good reason. It’s sharply priced, styled and kitted out, making it a compelling case in the seven-seat arena. The enduring Mazda CX-9 is a great benchmark to gage success given its level of prowess. It hardly puts a foot wrong, apart from the lack of a diesel (although the CX-8 has one), more than proving its worth as a class leader. For something with a bit of Euro badge cachet, the “honey I stretched the Tiggy” Tiguan Allspace is also a great performer – with seven seats.

A mid-life crisis is often a negative event. Not so for the spruced-up fourth-generation Santa Fe. It’s not just a nip and tuck with a bit of filler here and there. This is a makeover worthy of being called extreme. And it results in an already good base package being made even better. This isn’t a cosmetic horror story.

The long and short of it is that if you already liked the Santa Fe, you’re going to like it even more now. It’s matured, but also gained added style and pragmatism – no easy feat.