People movers hardly move the needle when it comes to desire and cars like the Kia Carnival and Hyundai iMax are certainly proof of that. Yet they sell, so there’s is undoubtedly a market for big families that need an urban bus… but what about curb appeal?

Enter the rather large Hyundai Palisade, an American/Middle Eastern-centric SUV that arrives Down Under endowed with presence and, crucially, the option of seven or eight seats. Plus, there’s a decent boot to, ahem, boot. It’s also keenly priced, well-specced and infused with a luxe feel we thought was only reserved for the Genesis brand. So, is it good enough to fend off its competition from the likes of Toyota, Lexus, Nissan and Mazda?

How much does it cost?

There’s the choice of a front-wheel drive (FWD) petrol V6 or an all-wheel drive (AWD) four-cylinder turbo diesel powertrain in either base or Highlander trims. The entry-grade petrol starts at $60,000, while the Highlander asks $71,000. Add CRDi to the nomenclature and the cost of entry kicks off at $64,000 and rises to $75,000 for the range-topping Highlander. 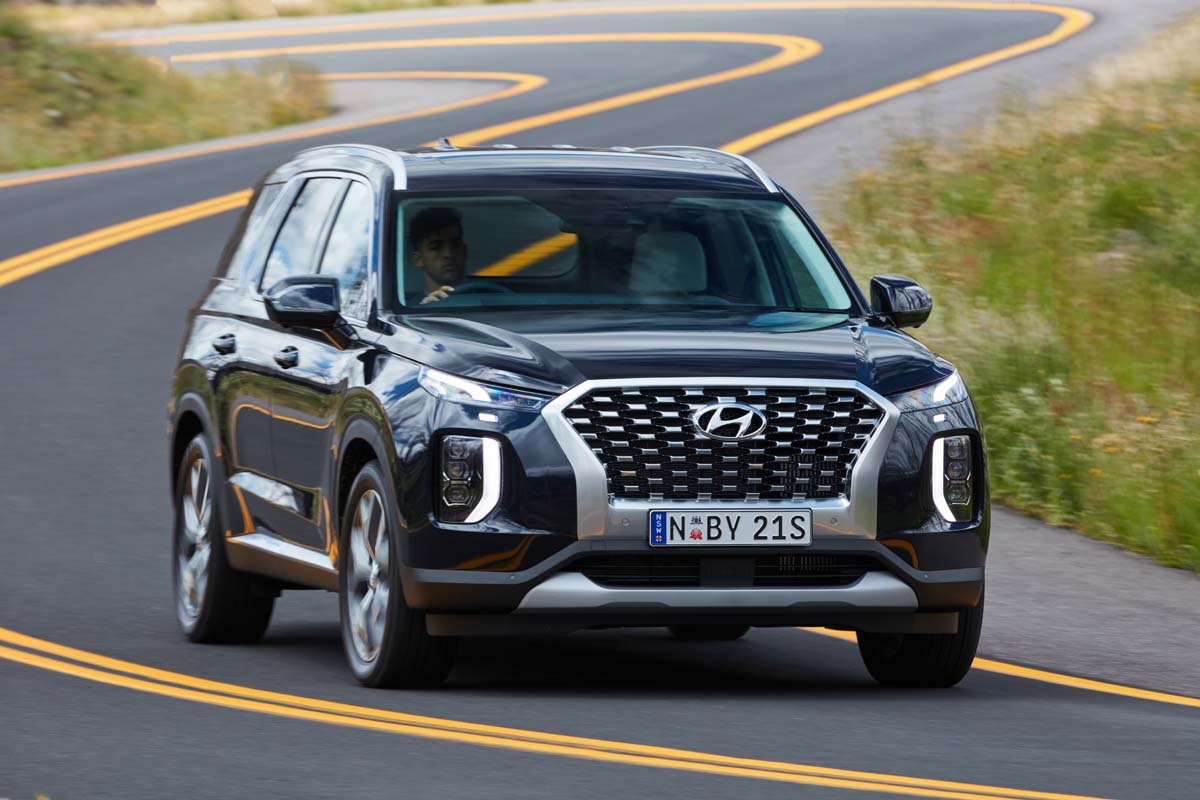 What does it cost to own?

If you opt for petrol you’ll be up for $399 per year for the first five or 75,000km, with each trip to the dealer occurring every 12 months or 15,000km. The same deal applies to the turbo-diesel powertrain, however, the monetary outlay increases to $469. The Palisade is covered by Hyundai’s five-year unlimited-kilometre warranty, which is the industry norm, but lags behind the seven years offered by its South Korean counterpart, Kia. 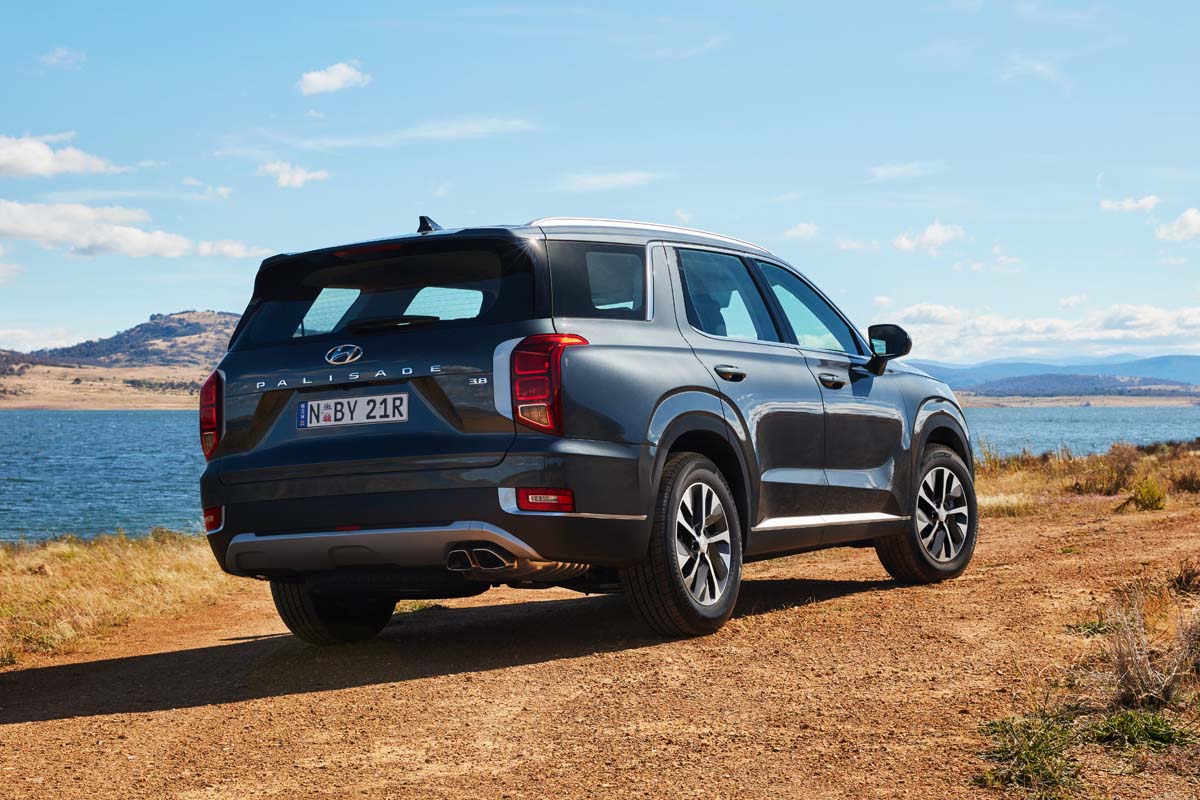 It’s big – at 4980mm long, 1975mm wide and 1750mm tall, the Palisade imposing. And so is the dominant, cascading front grille flanked by vertical LED daytime running lights. It’s hard to miss. The bold C-pilar design creates a floating-roofline effect, the body cladding beefs up the side silhouette and bold LED taillights round out the rear. The highlander gains 20-inch alloys, while the lower spec is fitted with 18-inch items. There are six exterior colours to choose from. 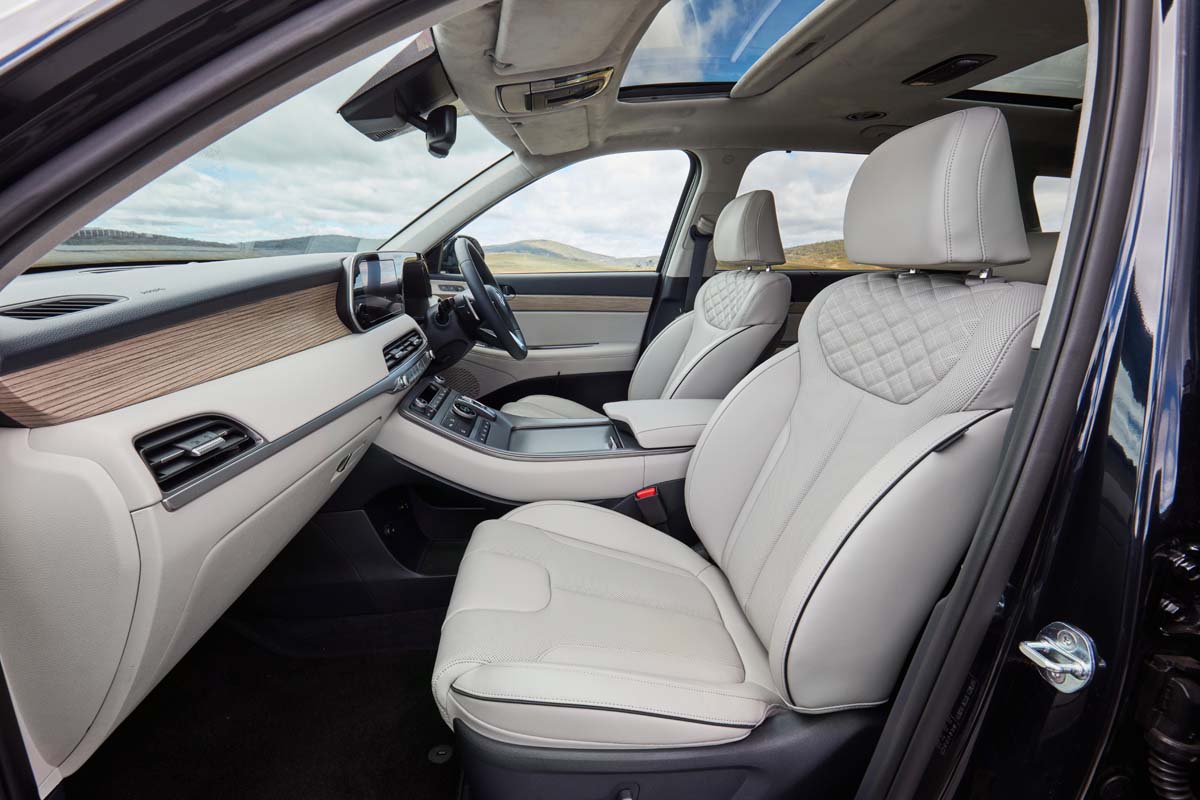 Cough… did someone say Genesis? While not being branded as such, the Palisade’s cabin is encroaching on the high-end league the Korean’s luxury arm is trying to capture. In design, quality and execution, the range-topping Hyundai SUV fulfils that brief. You have to look hard to spot and feel the less-desirable materials and switchgear, as almost everything embraces a degree of indulgence with leather as standard. Burgundy and beige Nappa leather is also available in Highlander trim. 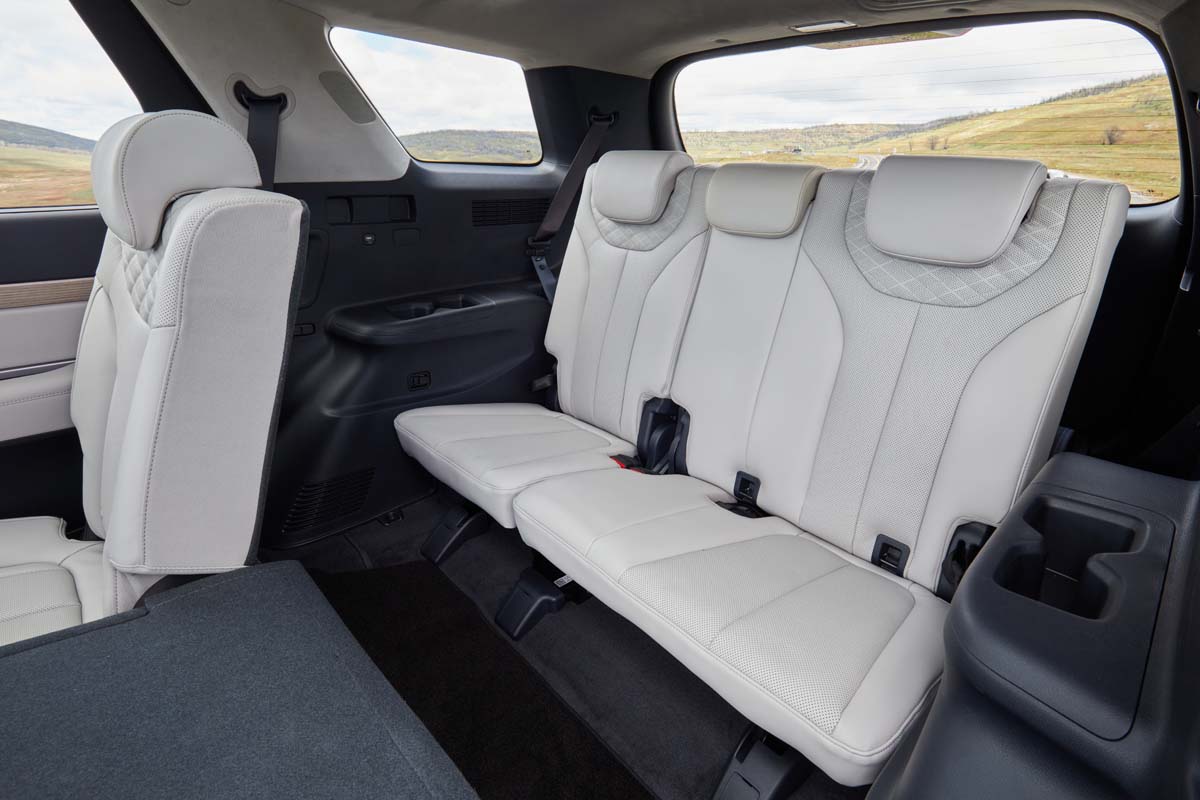 Road noise could be better suppressed; however, you have to keep in mind the rectangular, van-esque body style. Hyundai has a solution – Driver Talk. Accessed via the infotainment screen, the system uses a high-definition microphone and the audio system to allow the driver to talk to the second and third rows with their voice sounding through the speakers. Conversely, the new Quiet mode mutes the rear speakers and sets the front ones to a maximum volume of seven to allow calm for the rear passengers. Both clever features. 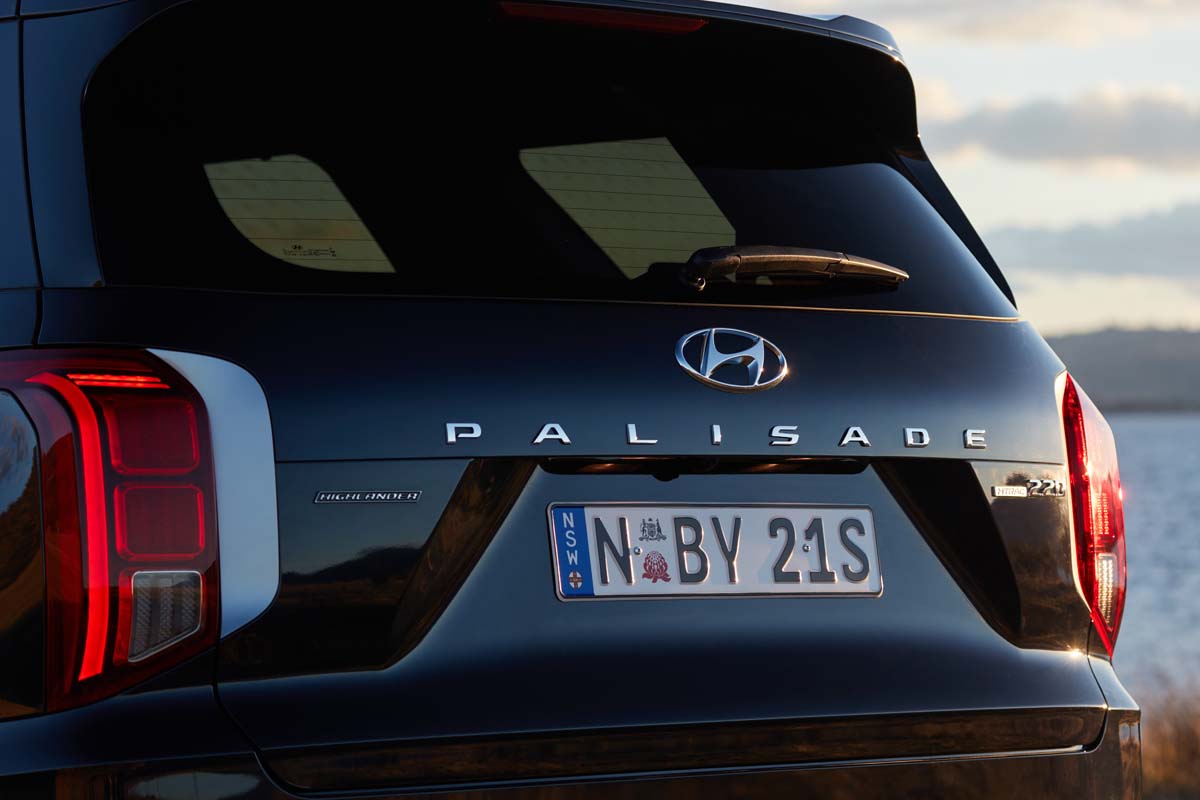 Interior space is generous. But, of course, the talking point here is the availability of eight seats. The first two rows have ample head and legroom, while the third row isn’t just for kids given the middle pews are on sliding rails (and fold via an electric release button). Headroom suffers slightly right up back in the Highlander due to the large panoramic glass sunroof. Gaining access to row three is manageable, while the seven-seat variant’s ‘captain’s chairs’ are not only cool, but they also aid manoeuvring into the back. 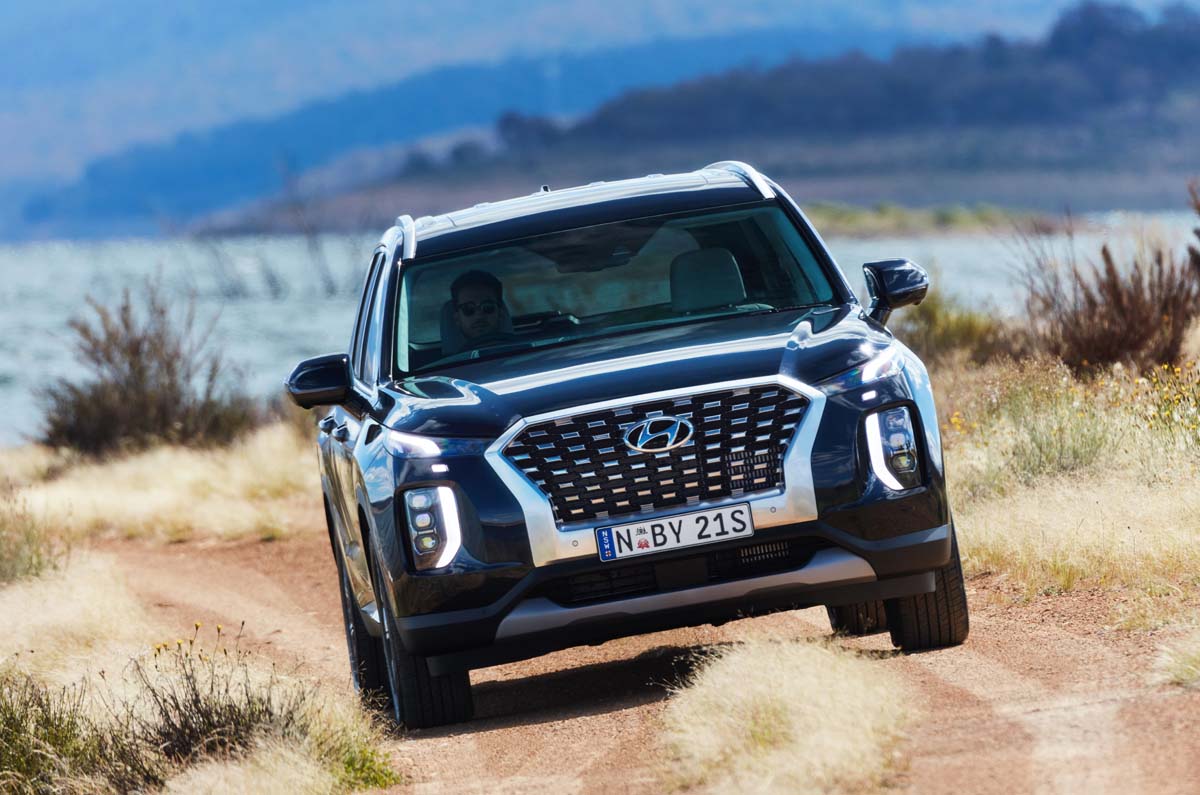 You receive a 7.0-inch TFT screen nestled within the instrument cluster (which also displays the blind-spot camera vision) and a 10.25-inch colour touchscreen to handle the infotainment. There’s wired Apple CarPlay and Android Auto, but wireless charging. No device will ever go flat with a total of seven USB charging ports littered throughout the cabin. The Harman Kardon sound system, with different numbers of speakers depending on the model grade, delivers high-quality tunes. 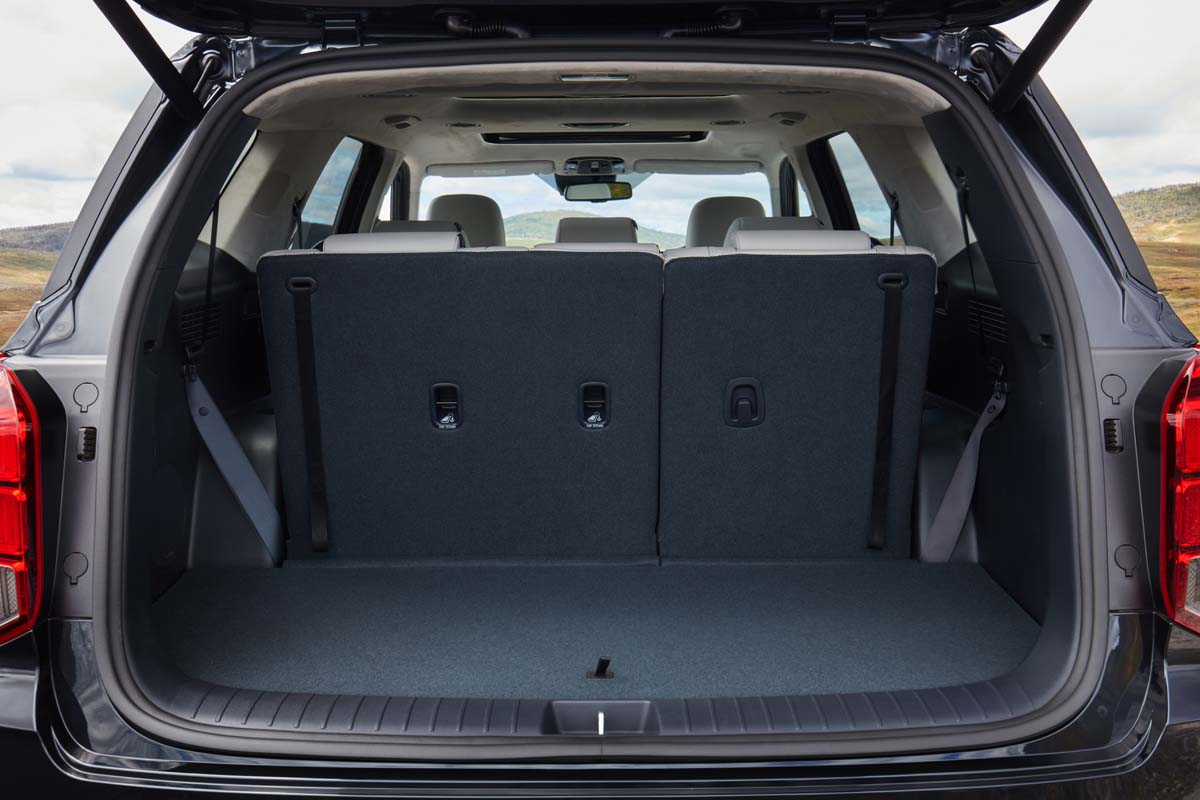 Any car/SUV touting the number of cup holders in the PR guff must be infused with packaging delights. And the Palisade is just that, with a total of 16 cupholders. We counted them, too. The new shift-by wire gear selector buttons free up valuable space in the centre console. As for cargo capacity, with all pews in place there’s a not insignificant 311 litres available, which grows to 704 litres with the third row stowed. A full-size spare resides underneath the Palisade. 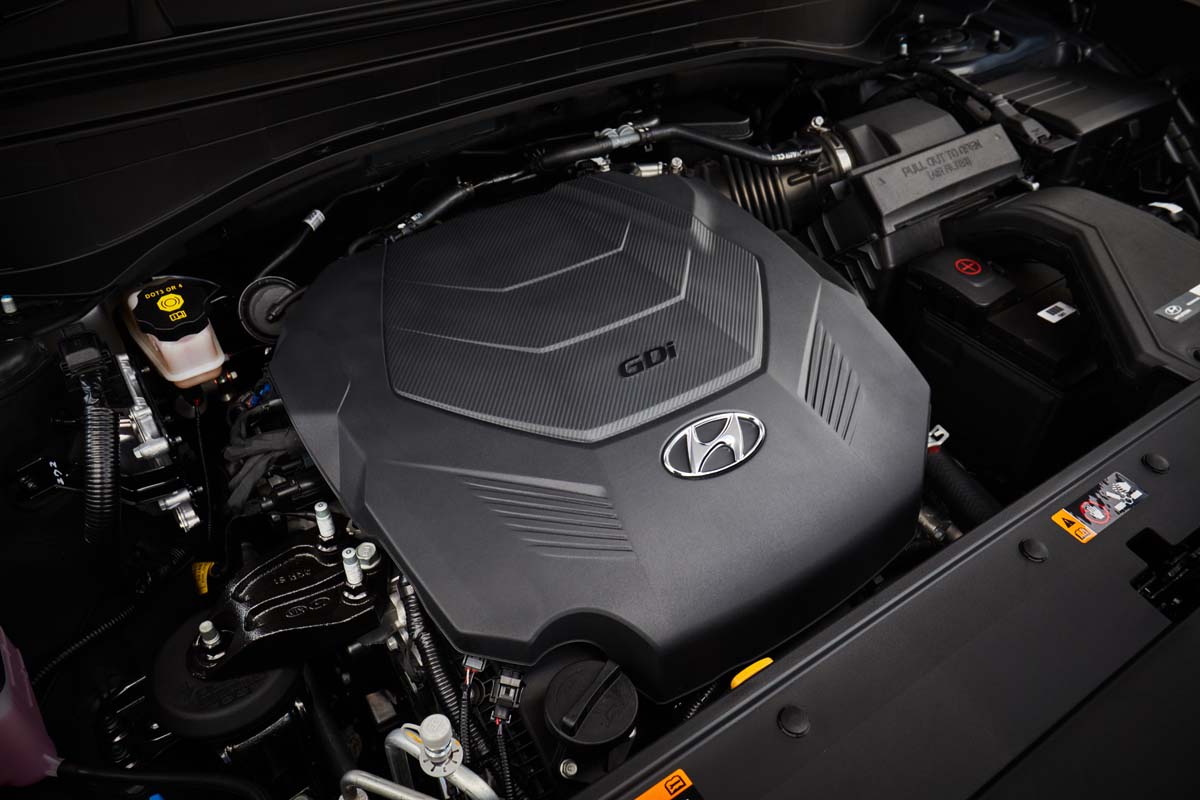 There are two, but only one you should really consider purchasing. That engine is the torque-monster R Series 2.2-litre four-cylinder turbo diesel, leaving the Lambda II 3.8-litre naturally aspirated V6 as the least-desirable option – no matter how sonorous it is. In fact, acoustics are the sole reason you’d choose it over the CRDi unit despite its soundtrack being far more road-car refined than commercial-grade diesel. 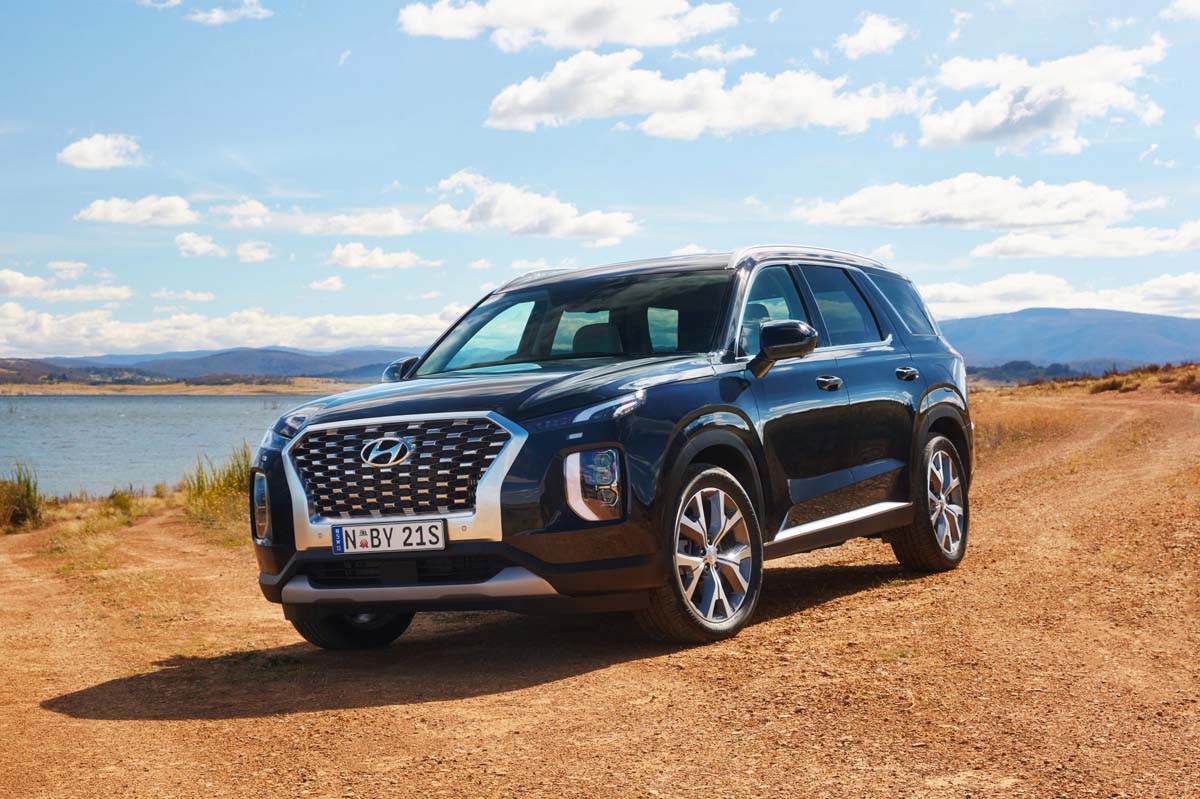 The V6 has more power on paper, with 217kW as opposed to 147kW, but it’s the diesel’s 440Nm-worth of torque that makes all the difference (85Nm more than the V6). Both engines tie-in well with the eight-speed torque-converter automatic, which is built by Hyundai. 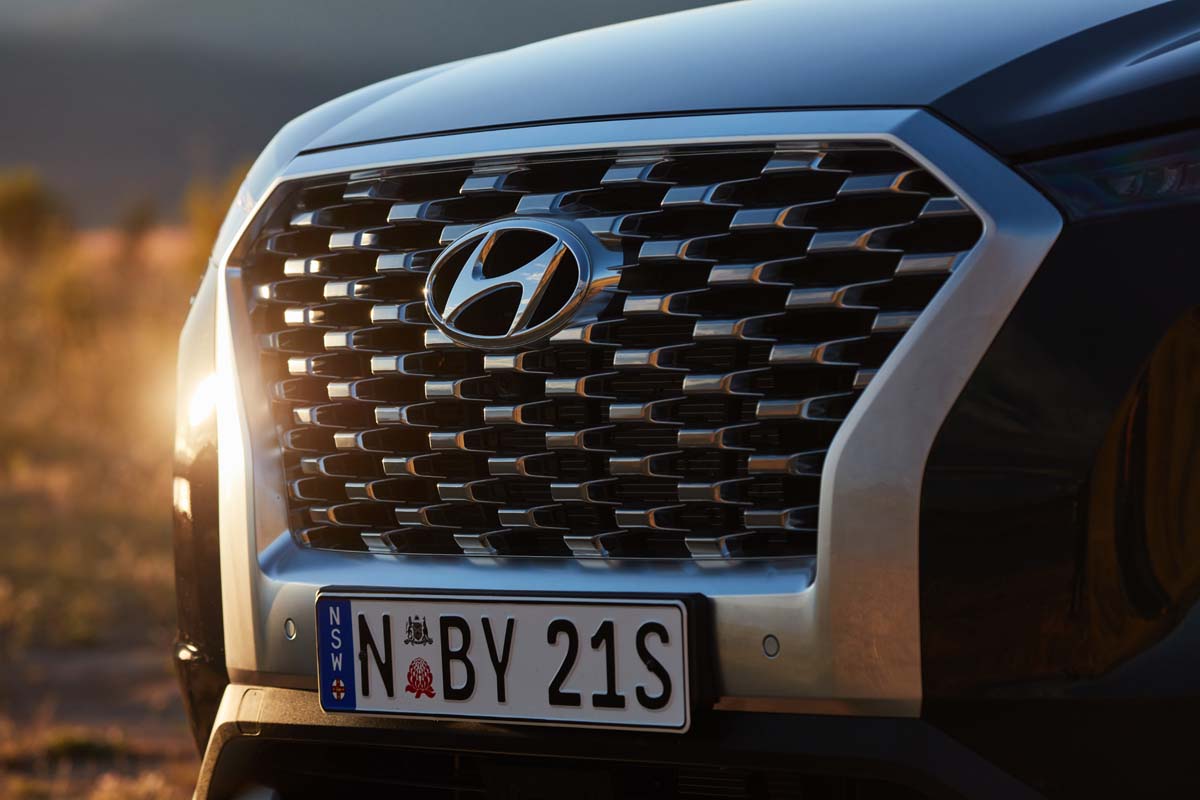 What about the fuel economy?

Well, it’s pretty obvious that the punchy 2.2-litre turbo diesel is going to be the better option in this regard. And at 7.3L/100km, as opposed to 10.7L/100km for the V6, it is. Why any family outside the trendy suburbs would not choose the oiler is baffling (especially given they both share a 2200kg braked towing capacity). Hence, Hyundai believe the turbo diesel to petrol take-up will be about 65:35 percent (respectively). As yet, no other hybrid or plug-in hybrid powertrain options are in the pipeline for Australia. 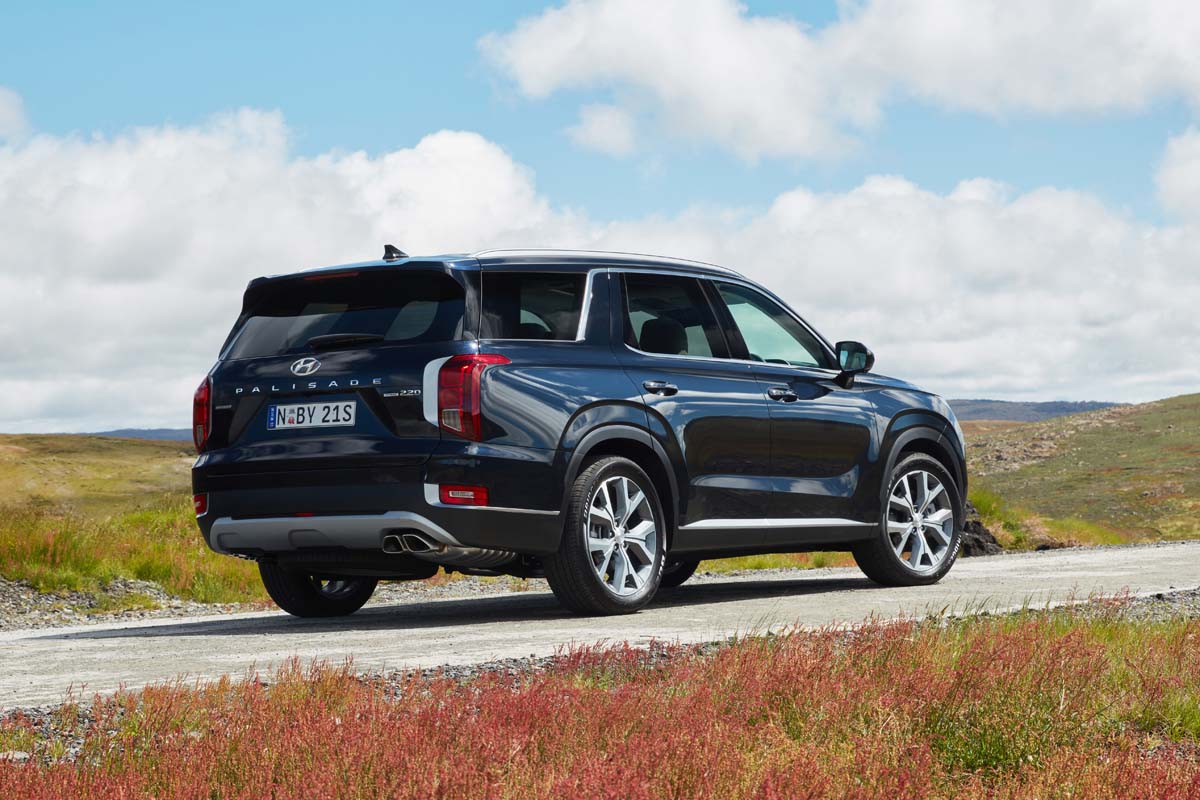 For a circa 1900kg SUV lugged with dimensions the Palisade is, the big Hyundai is surprisingly dynamically adept – as long as you remember those qualifiers. It consists of a monocoque platform, and not a body-on-frame chassis, which enlisted the help of Hyundai’s local tuning team as well as Namyang’s R&D gurus. The brakes are progressive and responsive, and while the steering isn’t flush with feedback, it’s relatively quick and fluid. 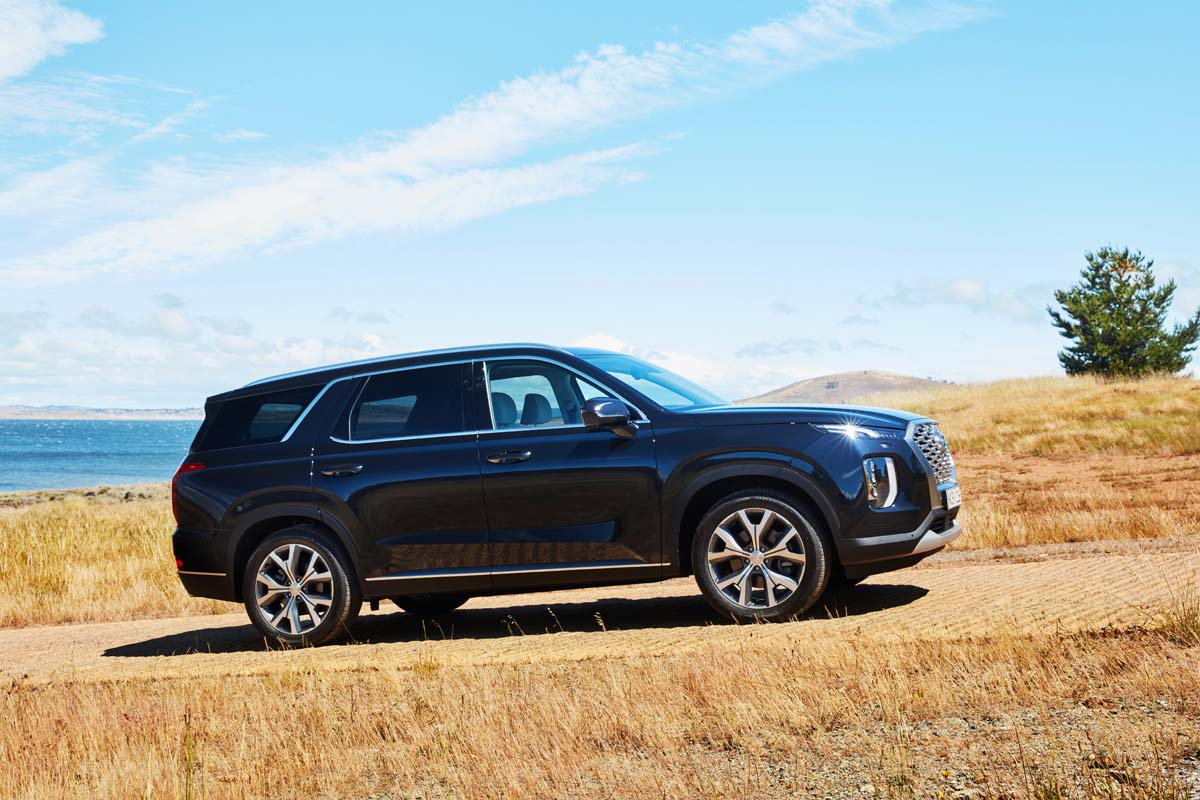 The chink in the armour is the ride quality that, to be fair, is controlled in terms of vertical movement thanks to the damping, but it’s never truly cosseting. Especially if you opt for the Highlander, which gains bigger 20-inch wheels and lower profile tyres (245/50 R20). Exiting Sydney on some very average surfaces with sharp potholes proves a tough task, however, the ride smooths considerably as the speed rises on various parts of the NSW highway network.

The FWD petrol version can suffer from torque steer and, even on dry tarmac, the front axle struggles to quell wheelspin under hard throttle applications. The V6 is crying out for AWD, however, it’s not available in Australia due to platform limitations arising during the switch to right-hand drive. And given our small market it’s not worth the outlay for Hyundai to develop it just for our market. 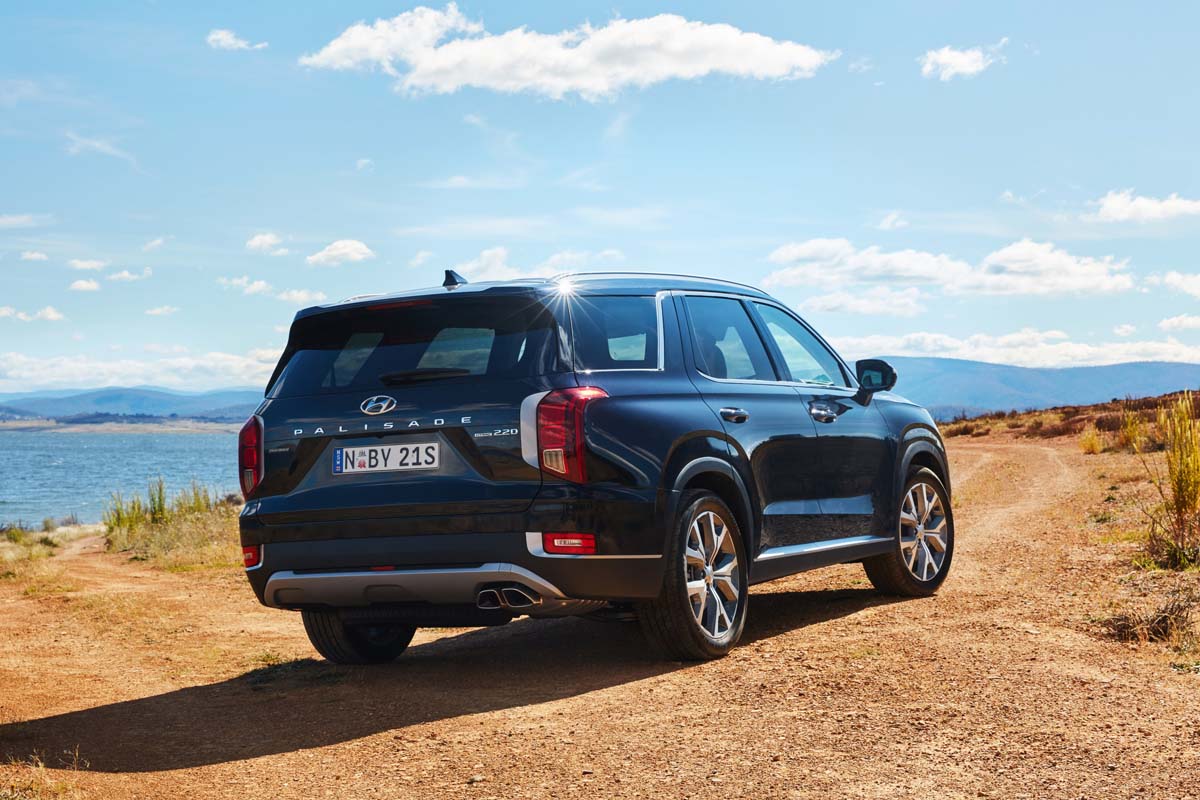 It’s unexpectedly fun off-road, too. No need to double check, we did say fun. Hyundai knows it isn’t a full-on bush-basher and doesn’t claim that the Palisade is capable of anything more arduous than light use off paved tarmac. And yet we did venture into smooth, yet sometimes heavily rutted, terrain. Here the FWD V6 morphed into a bit of a pseudo hatch…

No, you won’t be akin to Ott Tanak or Sebastien Loeb behind the wheel of an i20 N WRC, but the Palisade’s dimensions seem to shrink around you and the electronic nannies don’t ruin all the fun – there’s that word again. The caveat being that, even more so, the V6 struggles with traction despite the playful nature of the rear axle when the surface becomes loose. There are three ‘terrain’ modes with the HTRAC advanced AWD system, but with ground clearance at 203mm, even the diesel isn’t going to rival a LandCruiser or Land Rover Discovery off-road. 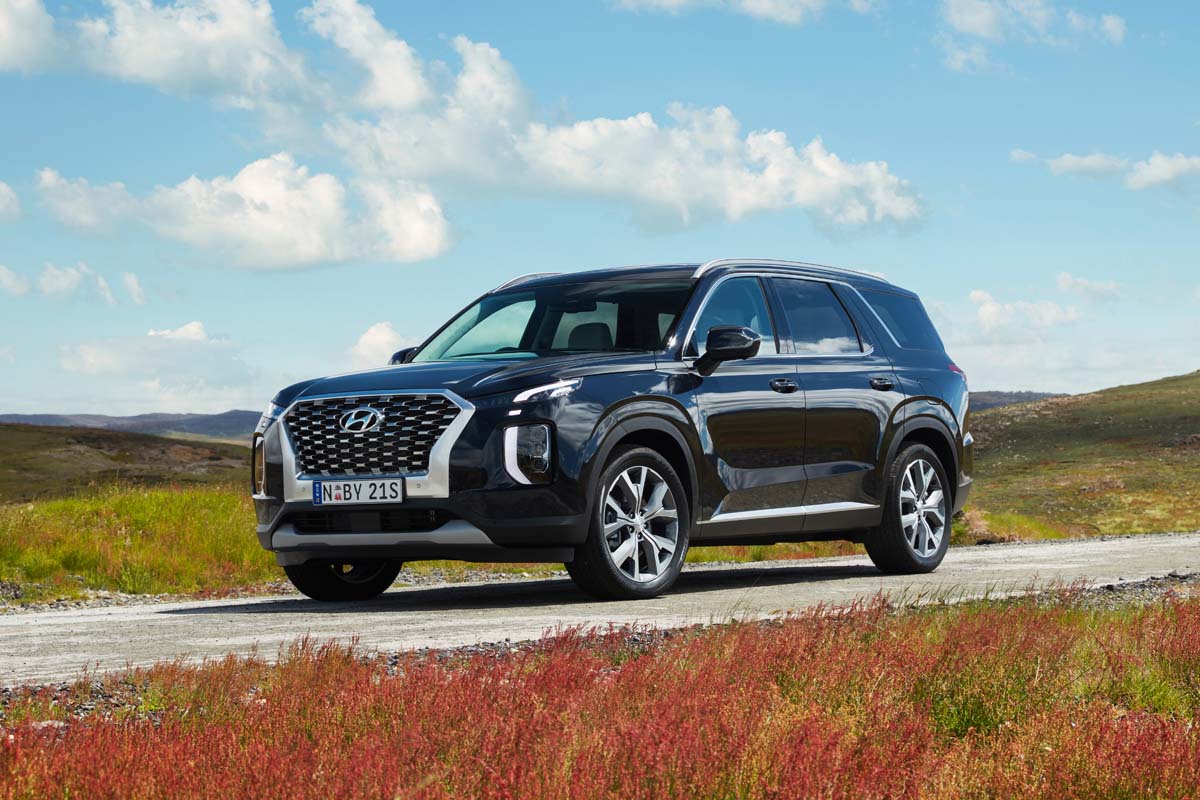 How safe is the Palisade?

The Palisade has not been tested by ANCAP and does not have a local safety rating. Additionally, without volume sales throughout Europe, the Palisade also goes without Euro NCAP analysis. 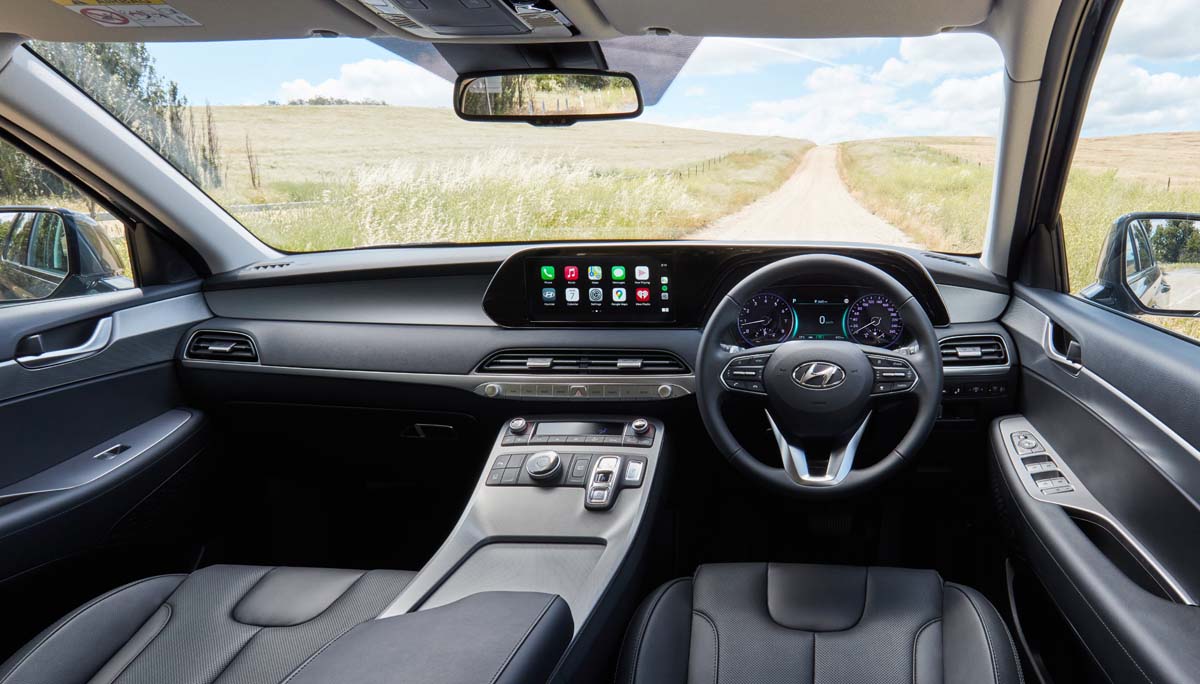 Stepping up to the Highlander adds cool features like a blind-spot view monitor, which uses a camera placed in the wing mirror to display a live video feed through the instrument cluster, as well as safe exit assist and a surround-view monitor.

The Palisade offers various ISOFIX points, as well as a full suite of six airbags, including curtain airbags that also extend to full coverage of the third row. 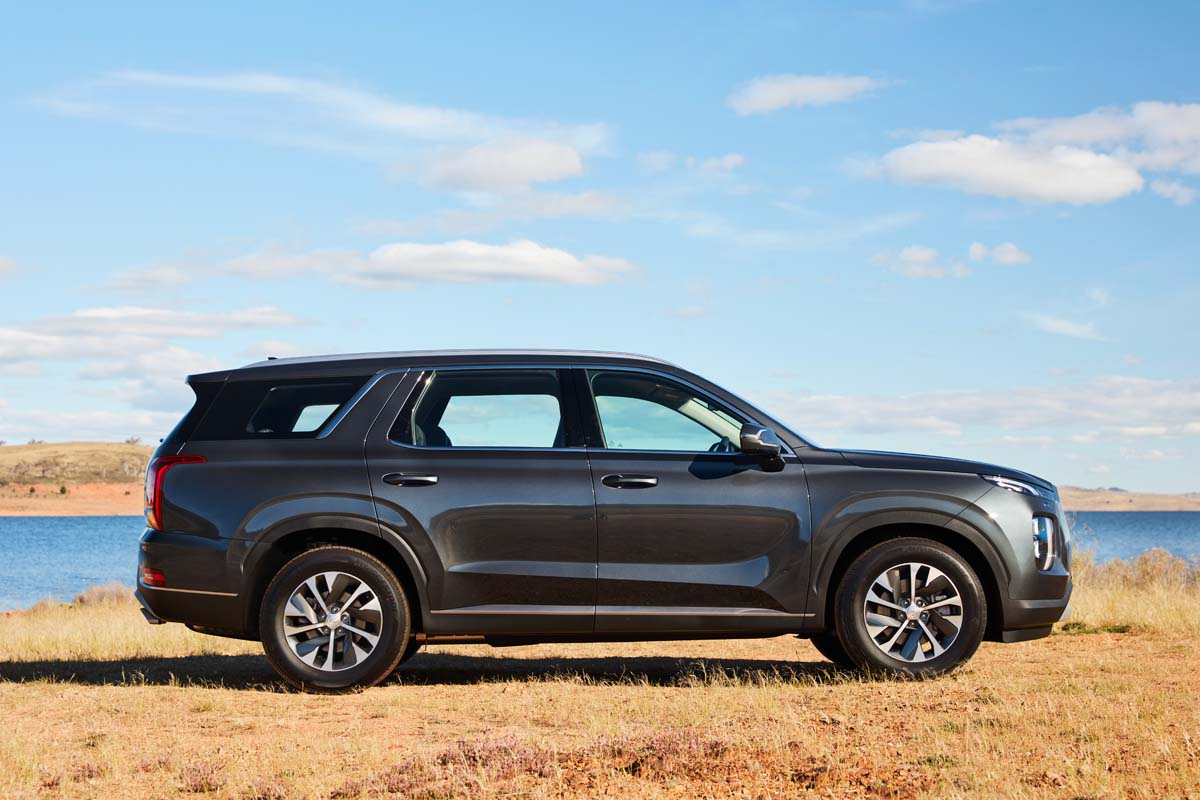 Bona fide eight-seat SUVs are hard to come by, but if you’re looking elsewhere to cross-shop, then the Toyota LandCruiser, Nissan Patrol and Lexus LX present as rivals. That’s based purely on eight-seat compatibility; however, Hyundai marks the Toyota Kluger, Nissan Pathfinder and Mazda CX-9 as its true competition. The latter represents the strongest opposition, with the cabin benefiting from Mazda’s high-end push and marrying well to the polished dynamics. However, Hyundai’s own Santa Fe is also worth considering if you don’t require an eight-seat behemoth. 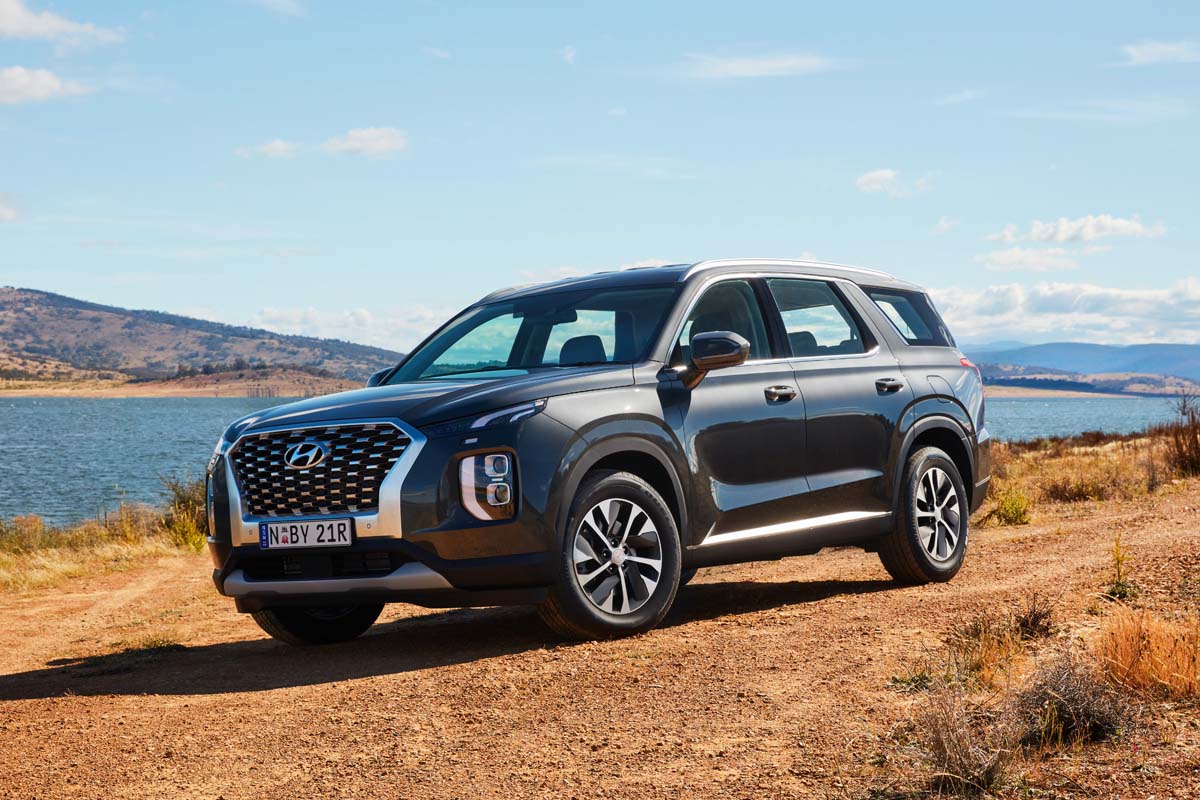 Petrol or diesel – base trim or Highlander? It’s hard to make a case for the petrol version given it’s a FWD-only proposition and is significantly more thirsty. If your budget can stretch to the Highlander it’s worth the jump in terms of tech and visual appeal, but you’re not exactly hard done by in the base model either. It’s an upmarket affair, too.

So, no longer do you need to entertain the ‘shame’ of buying a people mover. This eight-seat Hyundai is big where it needs to be and innovatively pragmatic to help family life. In many respects the Palisade manipulates the automotive social hierarchy to rival premium brands as a cut-price alternative. Now more than ever Hyundai’s monetary advantage is paired with a product of such quality that it deserves to be in the conversation when examining more fancied badges. And that’s a big statement.