One of the great joys of being in this job is laughing at people who say they really want to buy an EV but just can’t justify spending eighty-odd grand on a Tesla. I always tell them that there are five EVs under sixty grand. Suddenly, it’s not just cost that’s the problem. All the excuses come tumbling out and they end up buying a car that isn’t even a mild hybrid let alone an EV. They just aren’t serious about buying an EV I tell myself.

The last badge I expected to see screwed (okay, glued) to the front of a compact SUV with a fully electric drivetrain was the MG octagon. In 2005 Nanjing Automobile bought the MG name and its Longbridge factory and shipped the lot to China, keeping Longbridge as its UK home. The brand has wormed its way into our hearts with the cheap, perky MG3 and the ZS SUV. And now the ZS EV has arrived with a price that’ll crack your neck you’ll do such a cartoonish double take.

Sometime before the world locked the office door behind it and everyone went home seemingly forever, MG Australia announced that the first ZS EVs would be offered for $46,990. That was pretty good going for EV pricing at the time, undercutting Hyundai’s dumpy-looking Ioniq, Nissan’s Leaf, Renault’s ZOE (RIP) and well below Hyundai’s other EV, the excellent Kona electric. This week though, at its Australian unveiling, MG hacked out another three grand to offer the car for sale at $43,990 driveaway. 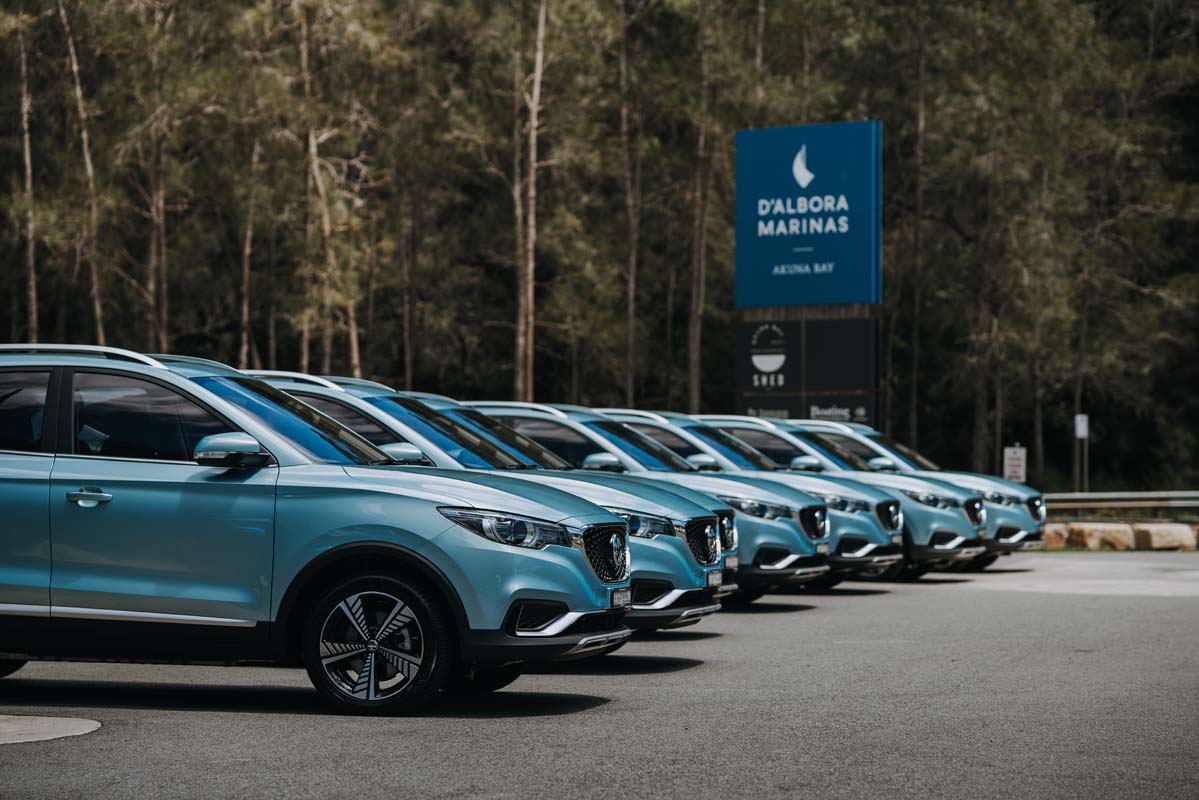 While it isn’t quite the same as Hyundai marching in 30 years ago and dropping the Excel for $13,990, it’s an eye-opening price for a car people are already buying in rapidly increasing numbers. It’s eye-opening in a good way – it’s a fully electric SUV for nearly twenty grand less than its nearest rival, at least like-for-like.

It’s not a particularly exciting specification but if I haven’t already mentioned it, this is a fully-electric car. 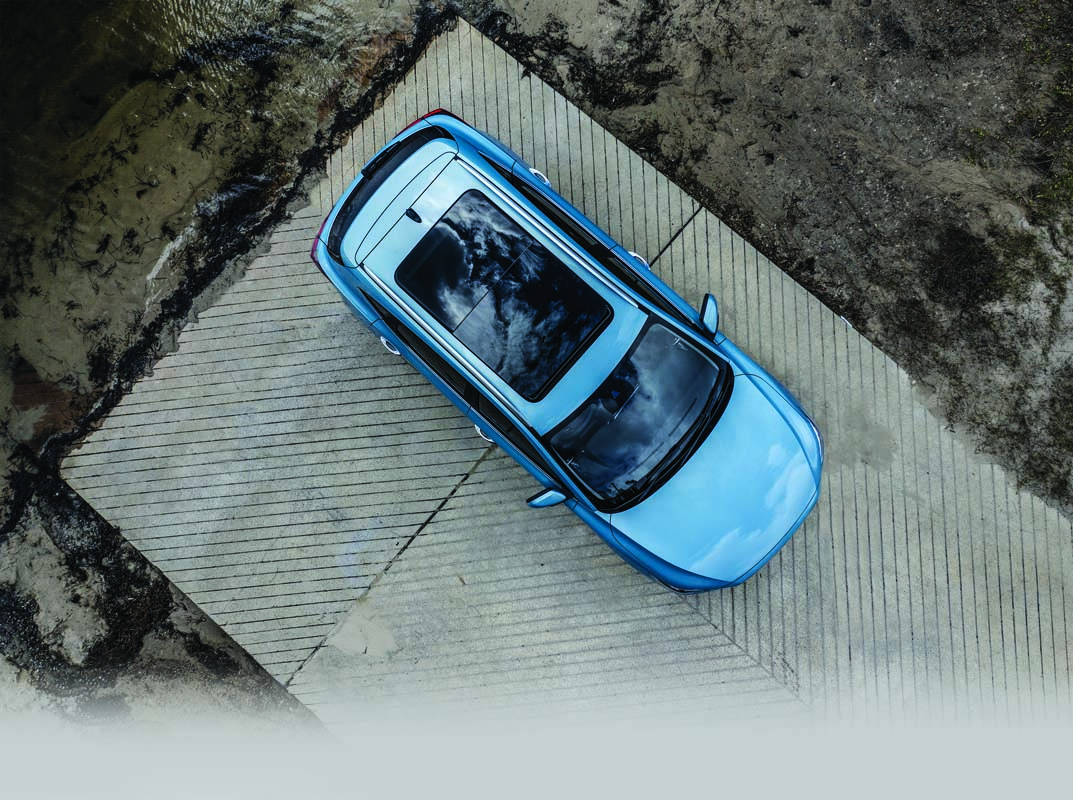 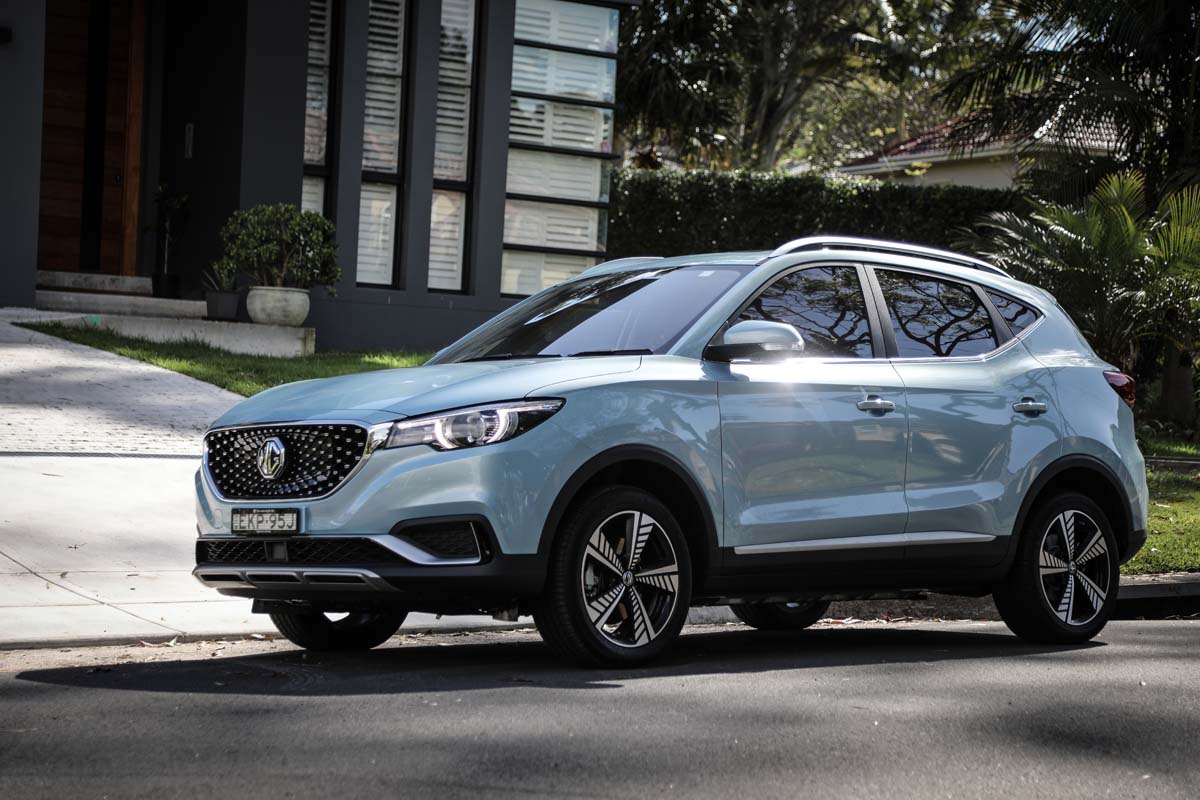 Every time I see a ZS, especially in profile, it reminds me of Hyundai’s ix35, which was a handsome car, so it’s not a criticism. The EV styling doesn’t go overboard, with just a badge here, silver roof rails and the alloys. If you’re not paying attention, you’d think it was a garden variety ZS, which I think is absolutely deliberate.

There is what MG calls a Diamond grille and it’s a nice effect, with big MG badge that you prod to open the charing port. Rather clever, actually, and I like the port being here, it doesn’t matter which side the cable has to reach.

The Clipper Blue is the colour to choose out of the five and if you don’t pick that, have you even bought the EV? 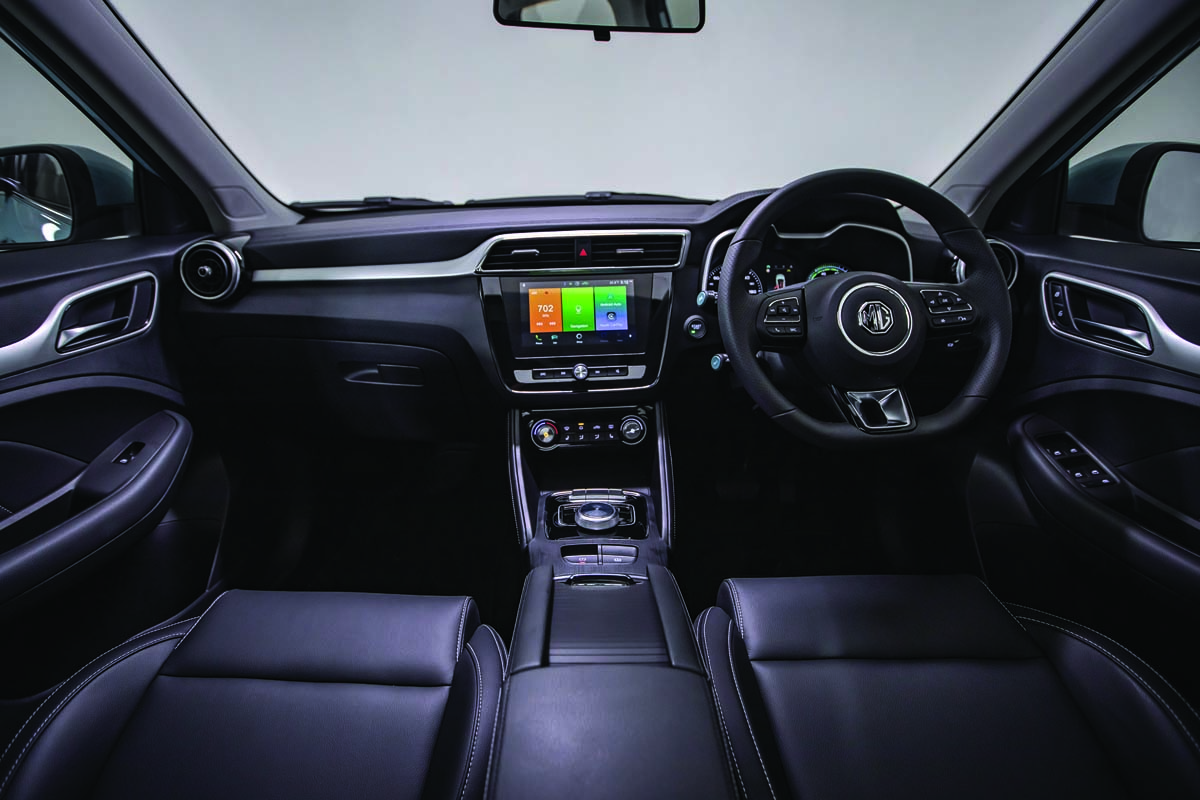 It’s quite big inside the ZS, which is a surprise because it doesn’t look very big. The synthetic leather on the steering wheel and seats makes the interior accidentally vegan, which could be a shrewd move if it’s deliberate. 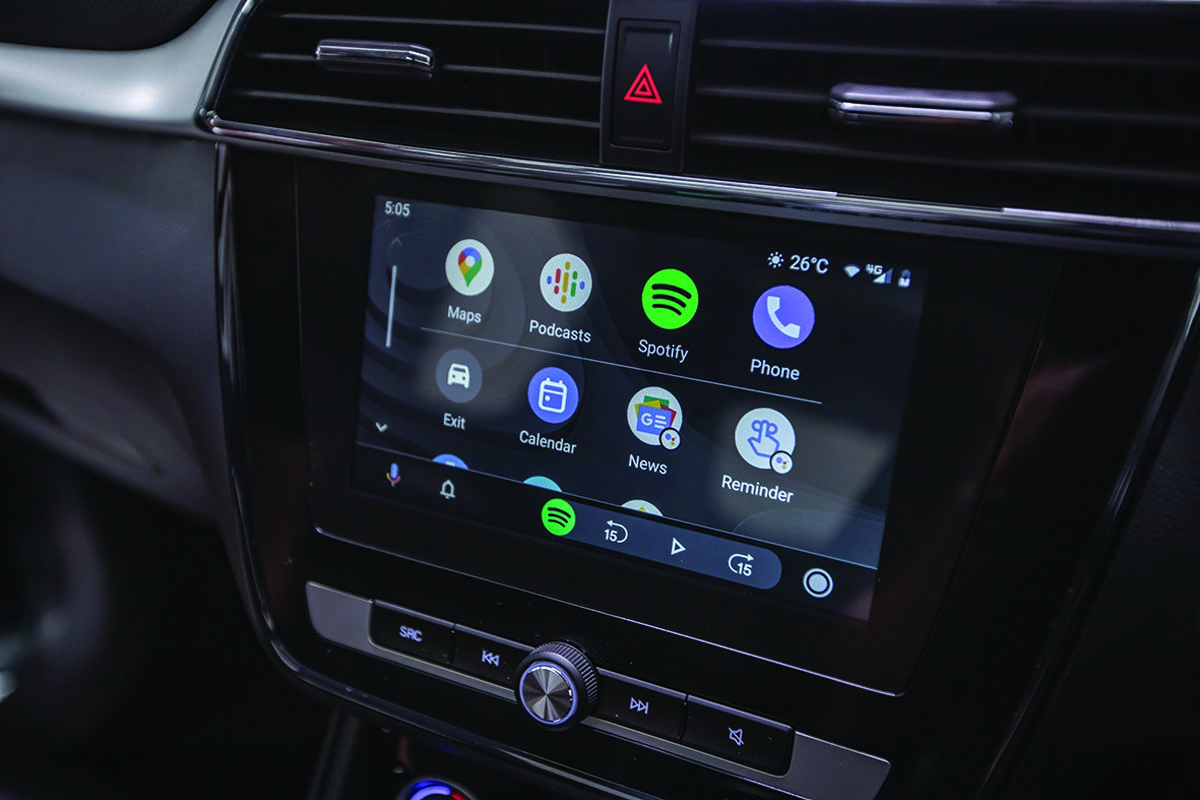 There are plenty of hard plastics but it all looks pretty good and it’s well built from what I can tell. A couple of adventurous moments like the rotary selector and the thoughtful switches for the drive mode select and KERS setting (Kinetic Energy Recovery System) are nicely laid out on the console. 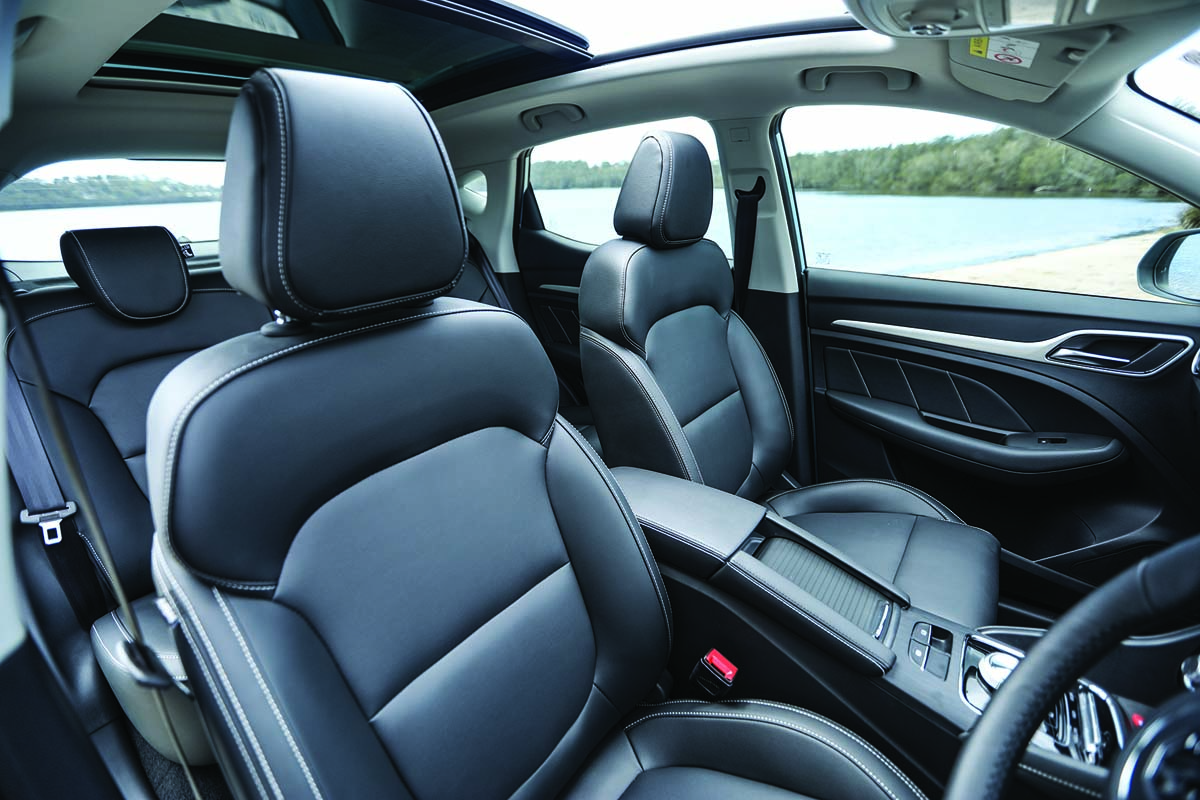 You can fit four adults comfortably, even with the huge sunroof which, unfortunately, really needs a blackout cover rather than the translucent one fitted. It’s going to heat up in here in summer.

The six speaker stereo is powered by an 8.0-inch touchscreen which has in-built sat nav as well as Apple CarPlay and Android Auto. The system isn’t especially brilliant but the hardware seems okay. The screen is bright and clear but it kept crashing and rebooting when CarPlay was connected. That might get a bit tired and one imagines that this will be the subject of a fix pretty quickly.

The sound from the six-speakers won’t trouble the Richter scale but does the job just fine. 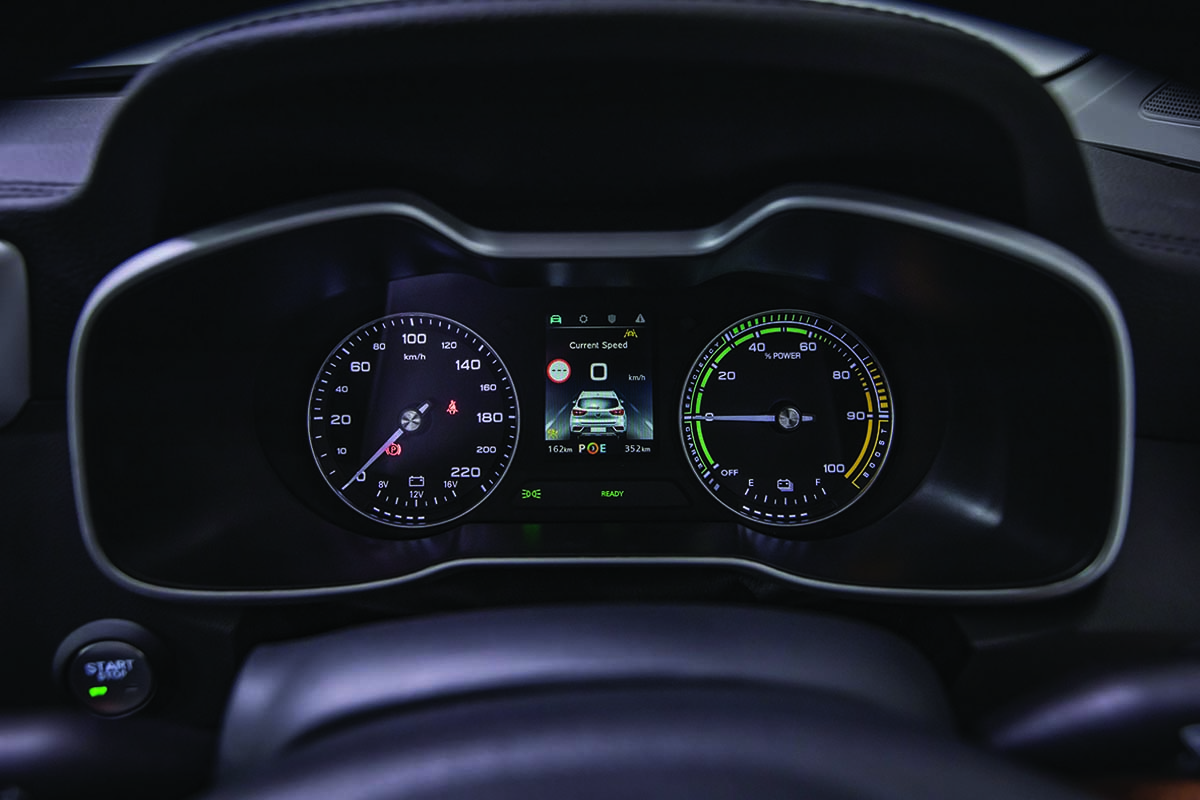 The centre console features two cupholders with a roll top cover if you want to hide your coffee cups, a small bin under the armrest and a place for you phone under the centre stack. Cleverly there’s a notch in the rubber mat that stops your phone sliding around and you can feed your phone cable down underneath the console to the neatly hidden USB ports.

The boot maxes out at 1116 litre with the 60/40 split fold seats down and with the seats in place you’re on 448 litres, which is bigger than the petrol-powered ZS’s. 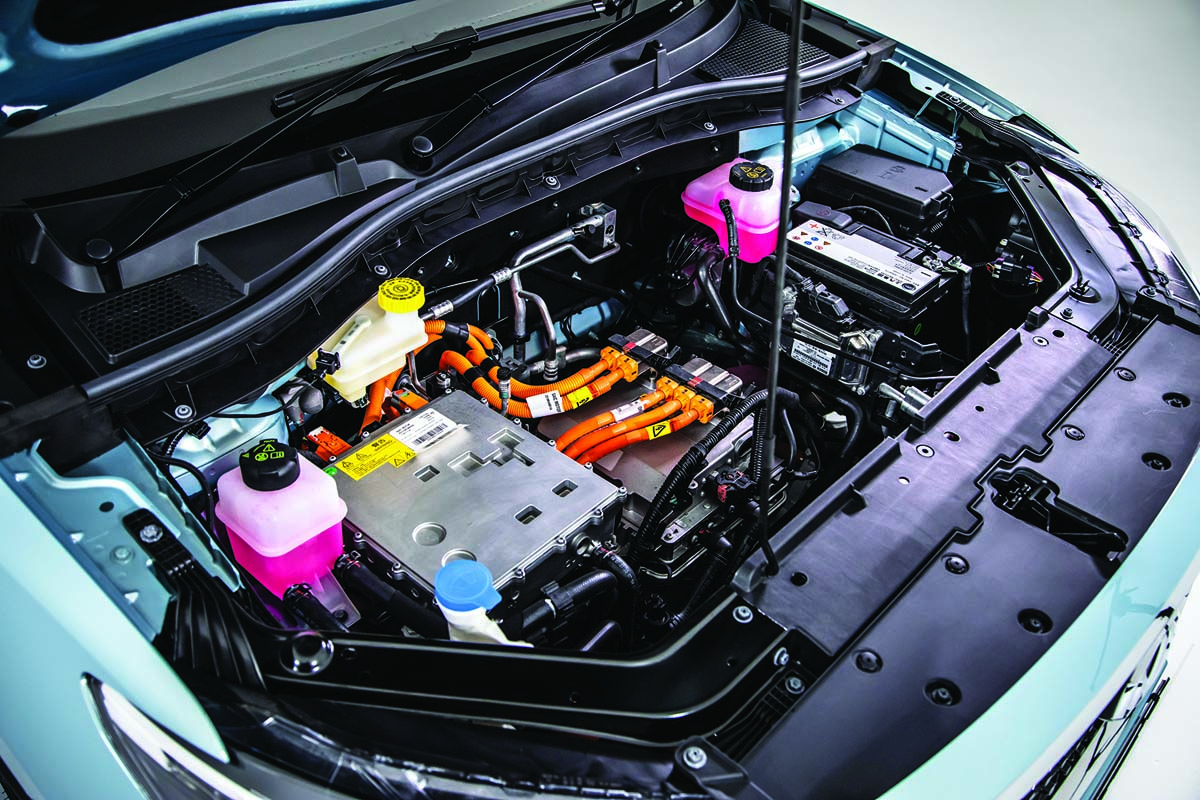 The ZS has a 44.5kWh battery powering a 105kW electric motor which also delivers an impressive 353Nm of torque. 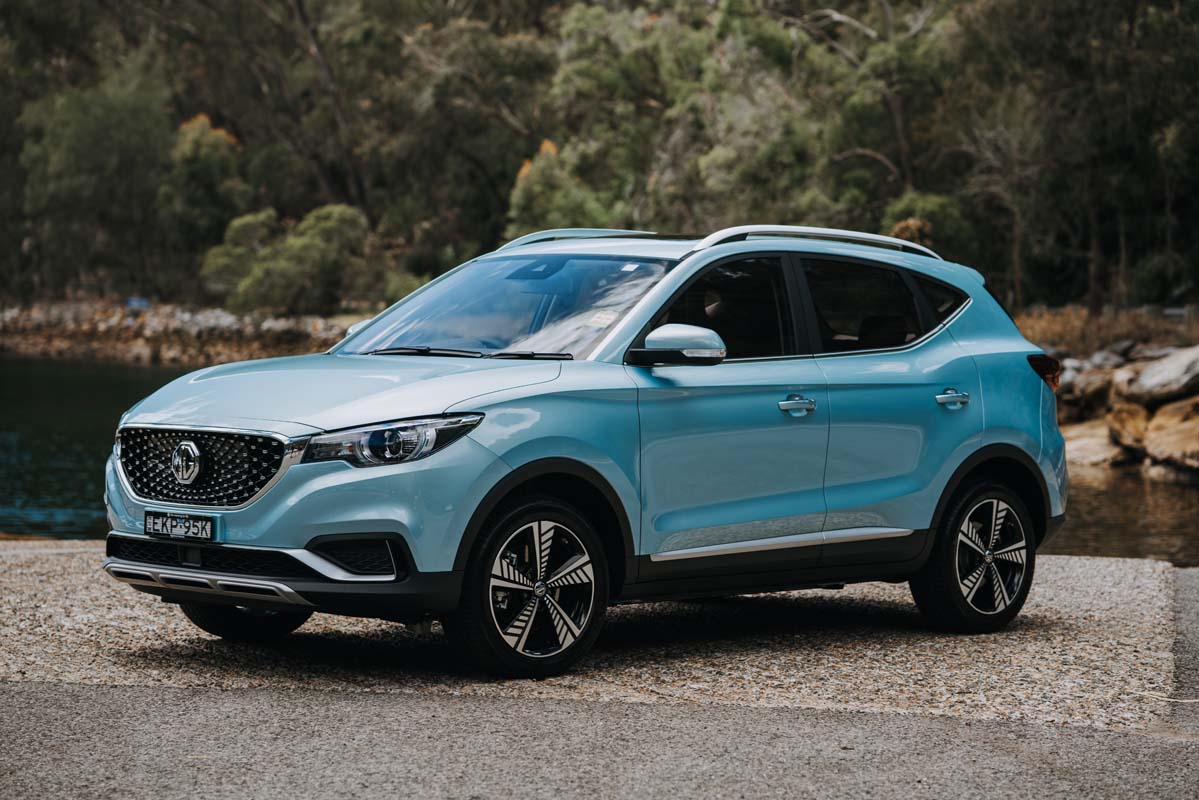 MG claims that on a single charge you can travel 263km on the combined cycle. That’s a WLTP figure which is far closer to reality than either the petrol ADR figures you see slapped on windscreens or NEDC range figures on some other EVs. 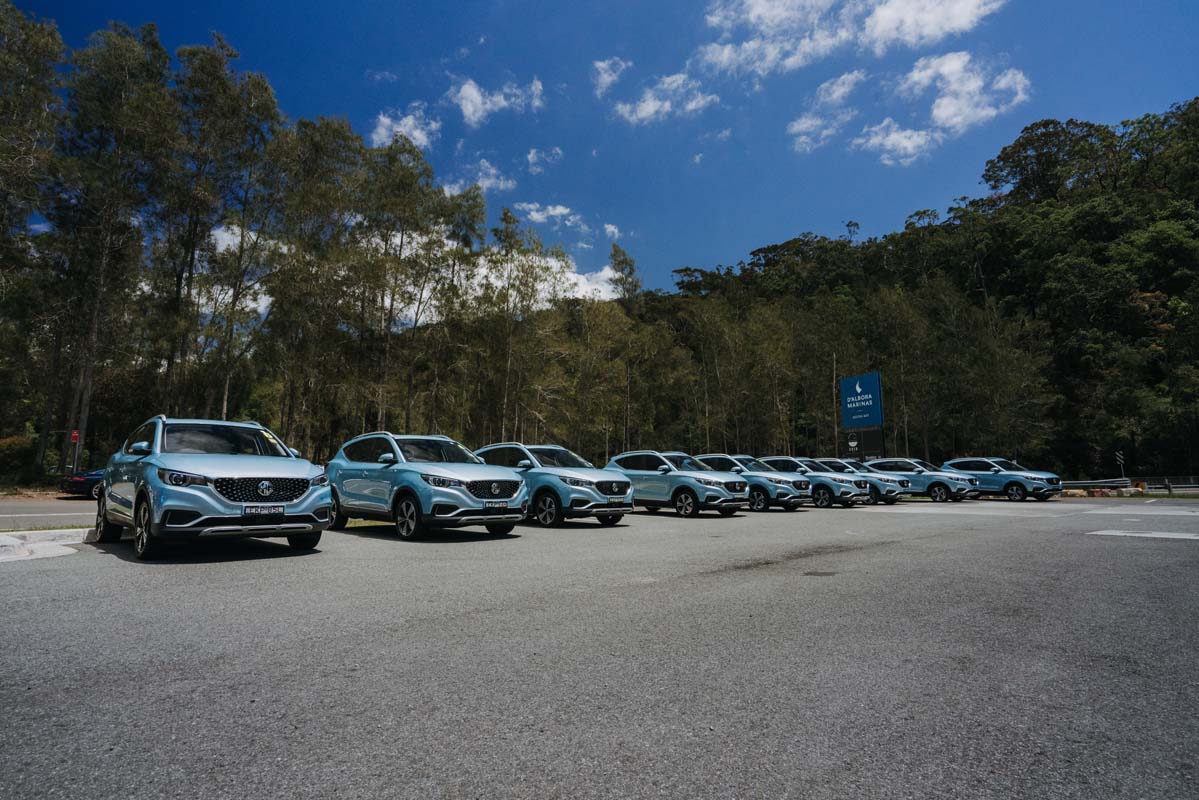 While that’s not a lot, MG doesn’t even try to pretend this is anything but a city car.

The launch drive wasn’t very demanding or long, but it was a typical weekend day out kind of trip up to a nice spot by the river. From the starting point in Alexandria which took in traffic, 80km/h zones, a bit of ducking and diving and the a few corners, the range claim looked pretty solid. 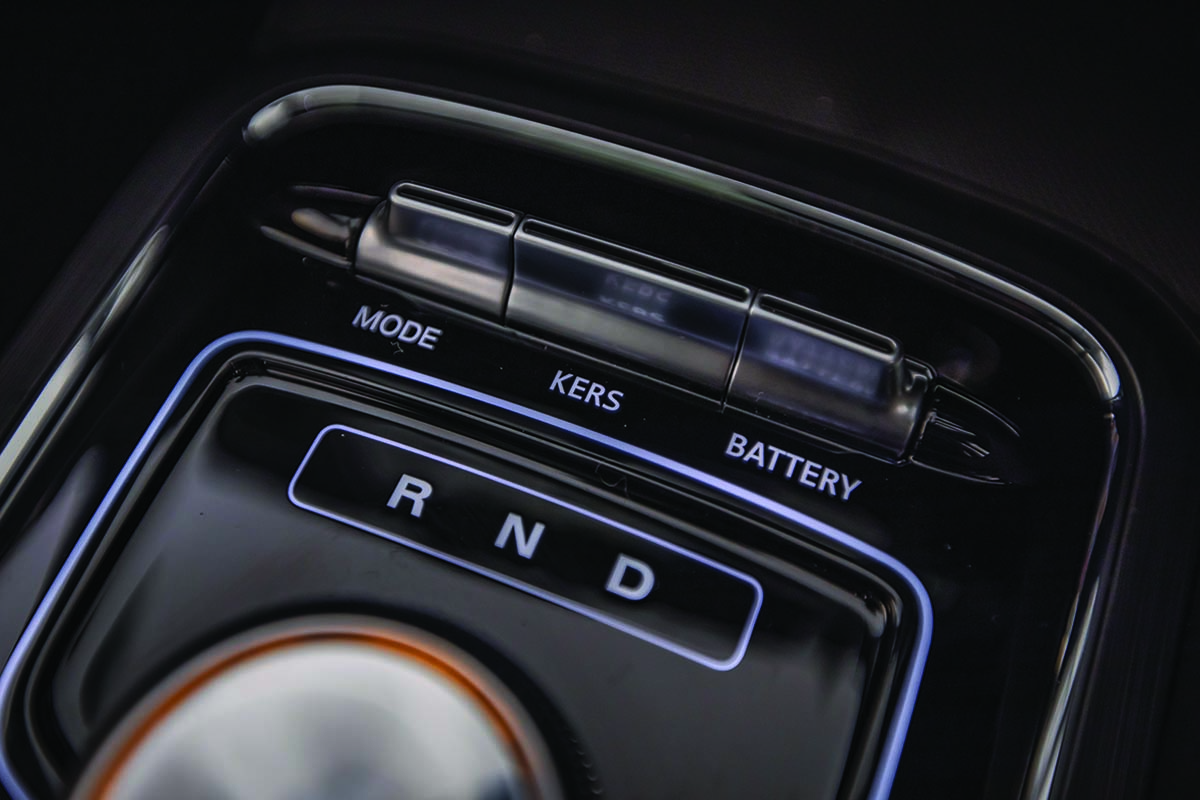 Now – you’re fretting about the range. Stop it. If you’re an average Australian, there’s almost a week of driving in a full charge. If you treat the ZS EV like your phone and plug it in every evening, you will never run it flat. No, not everyone has access to a power point, but plenty do. If you don’t you just need to plan to do your shopping or coffee drinking near a charging station.

Stop kidding yourself about wanting to drive around Australia, that’s not happening until you retire and even if you are doing it tomorrow, no EV will do it, so go and buy a Forester like everyone else, do the trip and buy an EV when you get back. 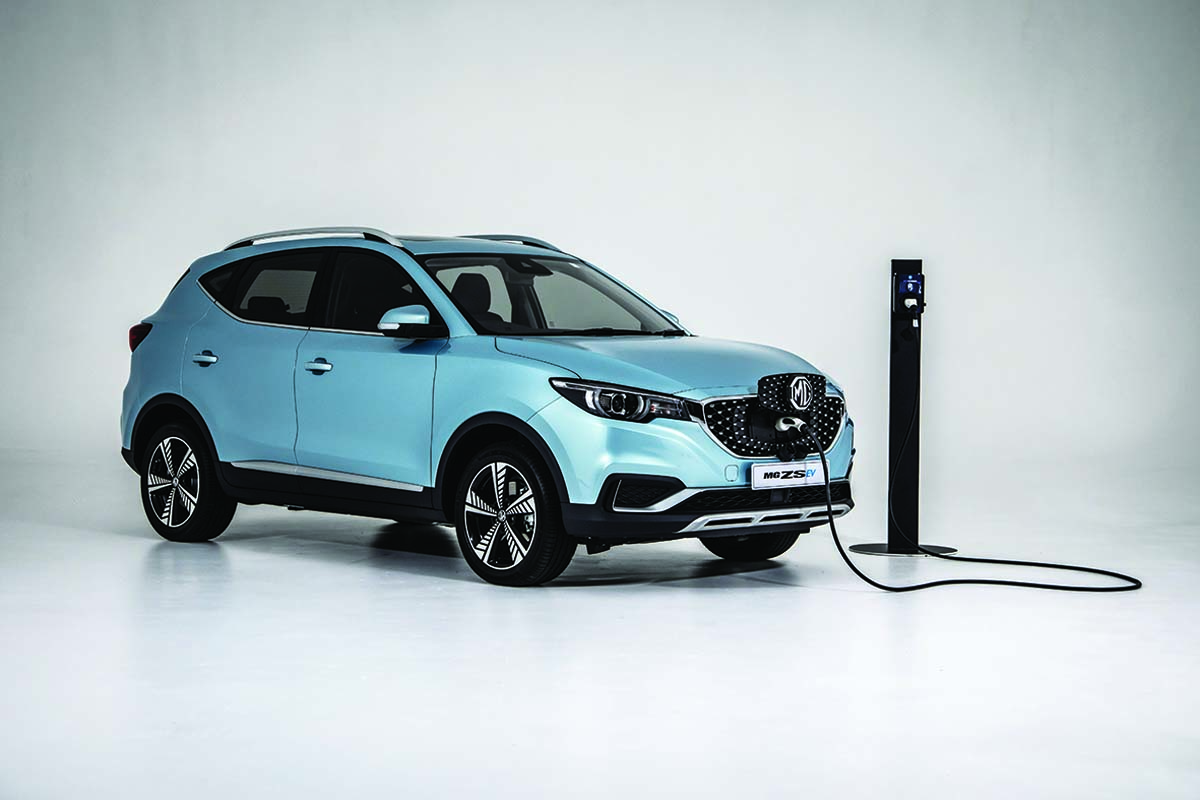 The ZS EV comes with a CCS2 charging port in the grille and will handle everything from a domestic power socket to a 350kW fast charger. If you’re on a fast charger, you’ll get to 80 percent in 45 minutes, which means it’s maximum charge rate is 50kW. So a fast-charger will step down to 50kW when you’re plugged in. 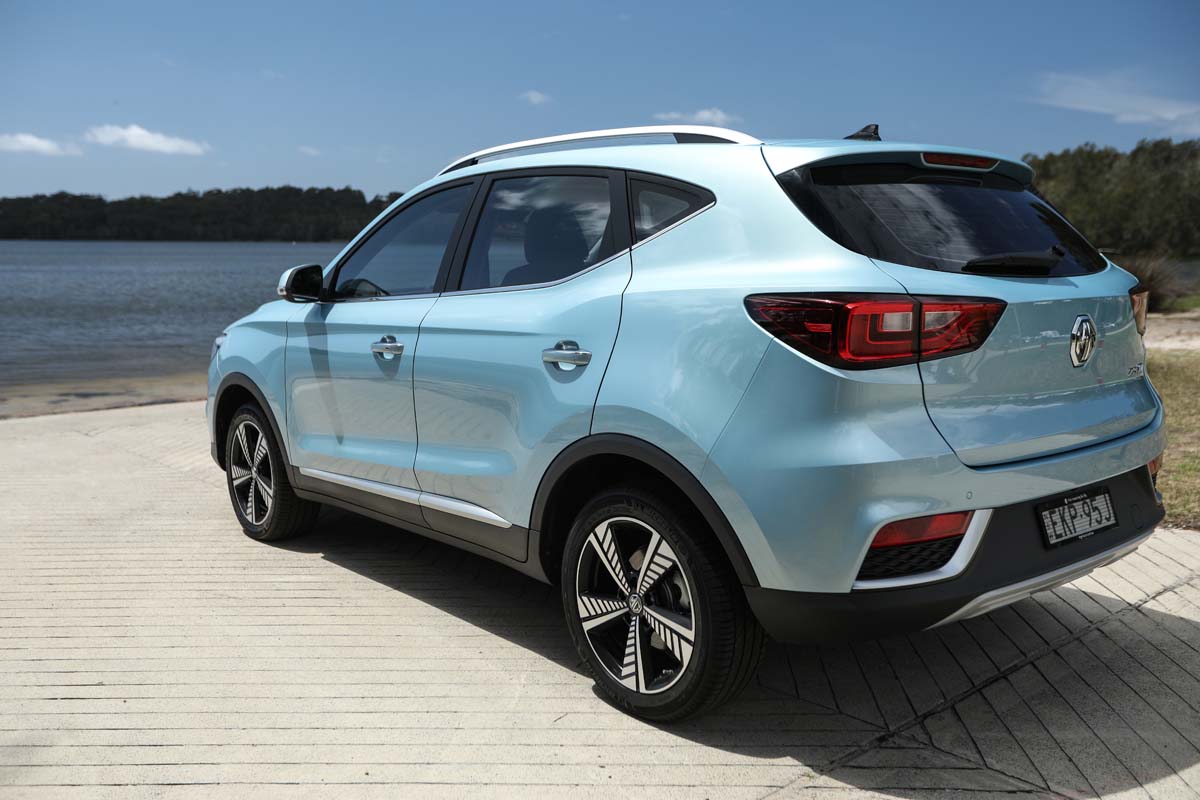 You can get a full charge at home in under seven hours, which for most people is just fine. On time-of-use billing, that means you can fully charge for around $6 (NSW, Ausgrid, off-peak at 13c/kWh). Given most people drive fewer than 30km per day (averages, obviously), you’ll be spending a few pennies per day keeping your ZS EV topped up.

MG is working on a deal with Chargefox which could net you free charging for a set period from any of their 1400 charging points. 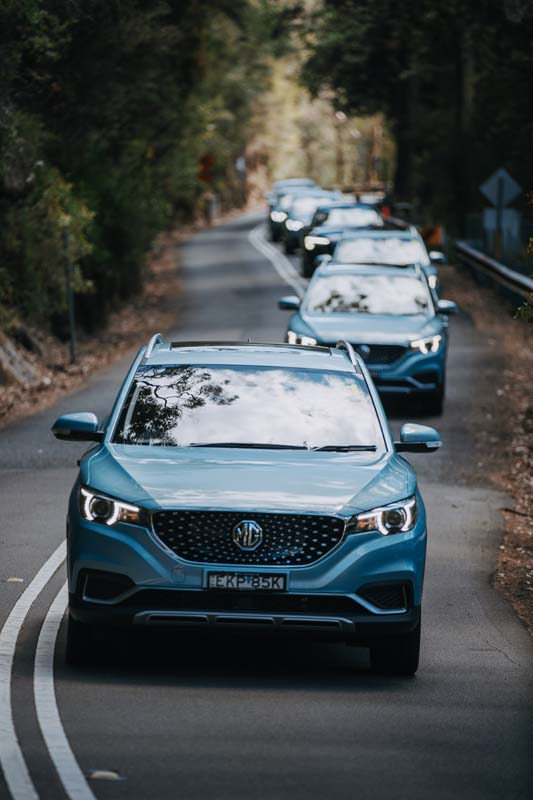 Around town – where these cars will spend the vast majority of their time and more than likely few will ever leave – the ZS is quite good. Light steering coupled with the punchy electric motor makes the ZS a bit of a weapon. The torque management seems quite good with only sport mode combined with a very, very unsympathetic right foot and plenty of steering lock getting a chirp from the front tyres.

Plenty of suspension travel serves up a reasonably cushy ride over potholes and all the usual garbage Sydney roads are full of. And the ride held as speeds increased through the tunnels and over the motorways, as well as the gentle winding of the roads on Sydney’s north shore. 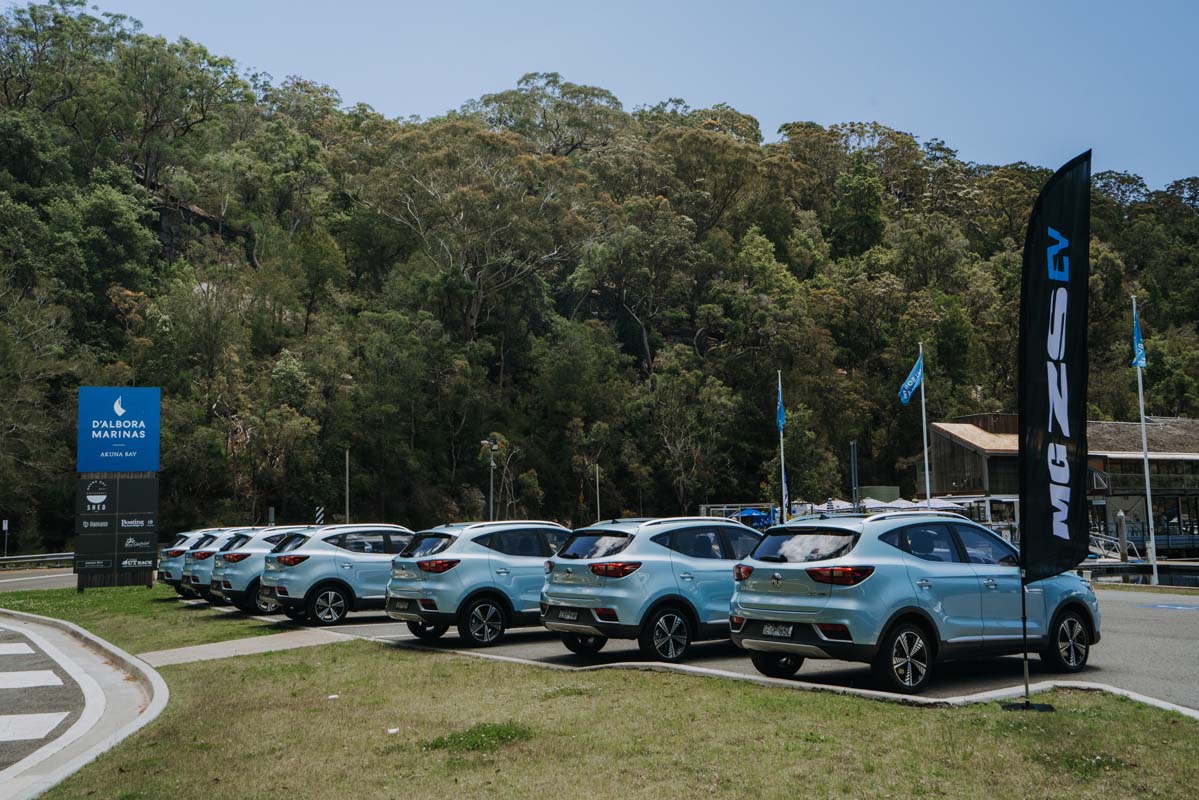 It’s quiet, too, up to 100km/h which was as far as I got given the speed limit was slightly lower than that. It feels good on the road although after a while the lack of reach adjustment in the steering wheel began to take its toll, so I had to fiddle with the seat position and rake to get comfortable. Seems to be an EV thing, this – both the Renault ZOE (RIP in Australia) and Nissan Leaf suffer the same spec omission.

And that torquey performance is addictive. Stab the pedal and it winds up quickly, pushing you past slower cars with ease. The 0-60km/h time of three seconds almost feels conservative, while the 0-100km/h time of 8.5 seconds feels about right. 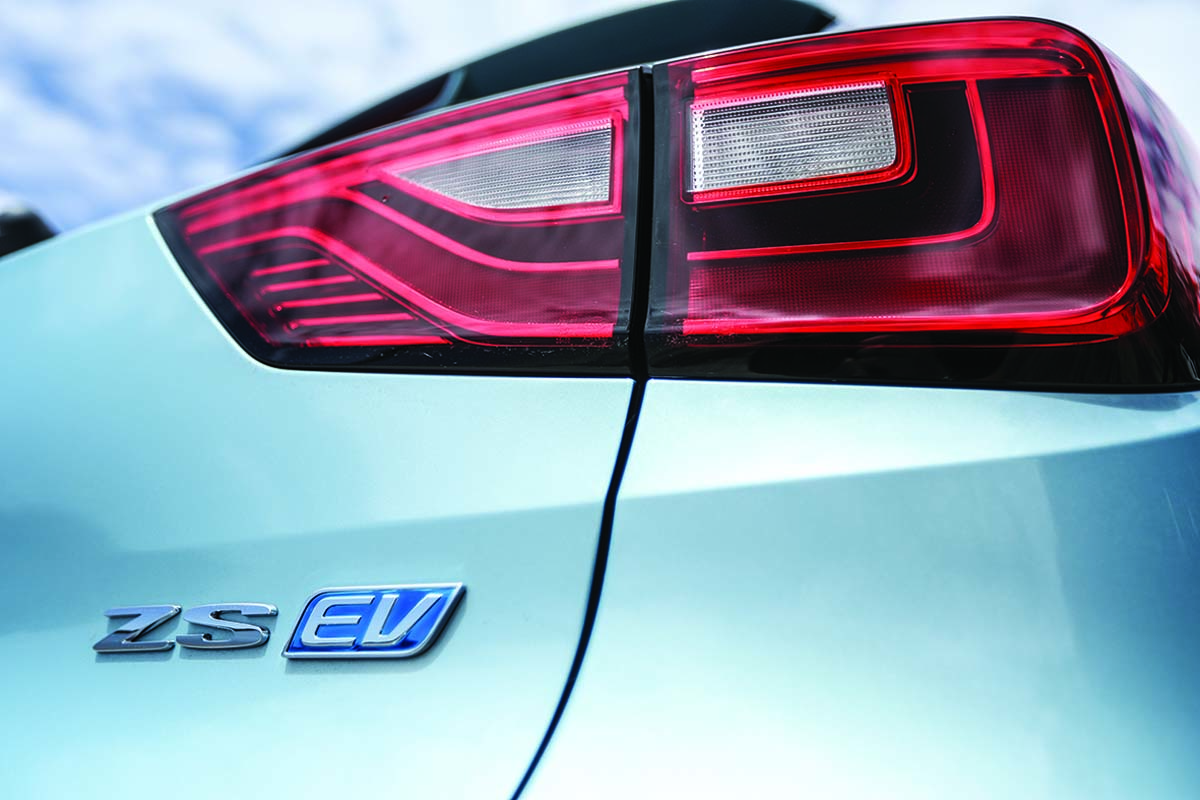 It’s on B-roads where MG needs to put some effort. While it’s highly unlikely many owners will take their ZS EV for a 5am drive down a winding road, it’s worth knowing that you won’t be cornering very quickly. The front tyres scrub across the road and the body pitches and rolls at relatively low speeds. Your rear seat passengers, who will have enjoyed the hushed ride and smooth power delivery won’t be too pleased. As long as you don’t want to get too ambitious, you’ll be just fine. 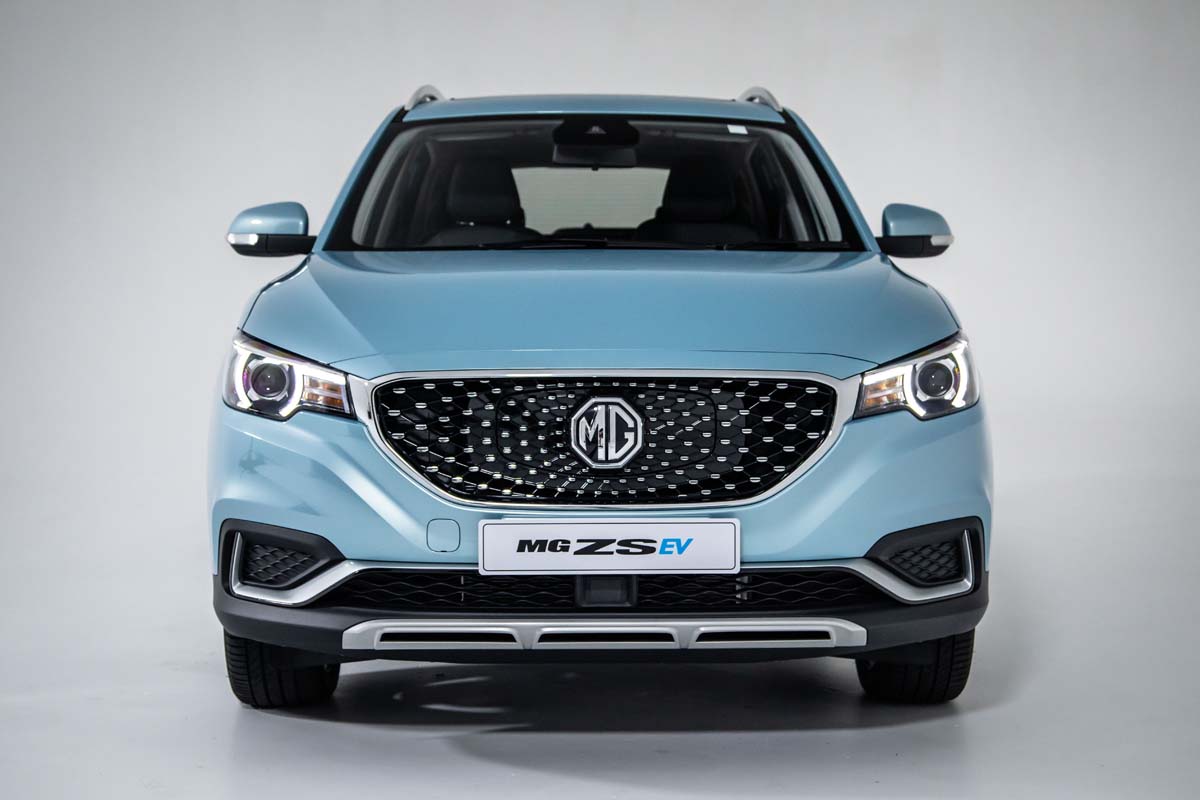 HOW SAFE IS THE ZS EV?

Like it’s ICE-powered counterparts, the ZS EV scored five Euro NCAP stars. That should mean a five-star ANCAP rating, but that doesn’t always happen for reasons that are sometimes not obvious.

You also get three top-tether anchors and and two ISOFIX points. 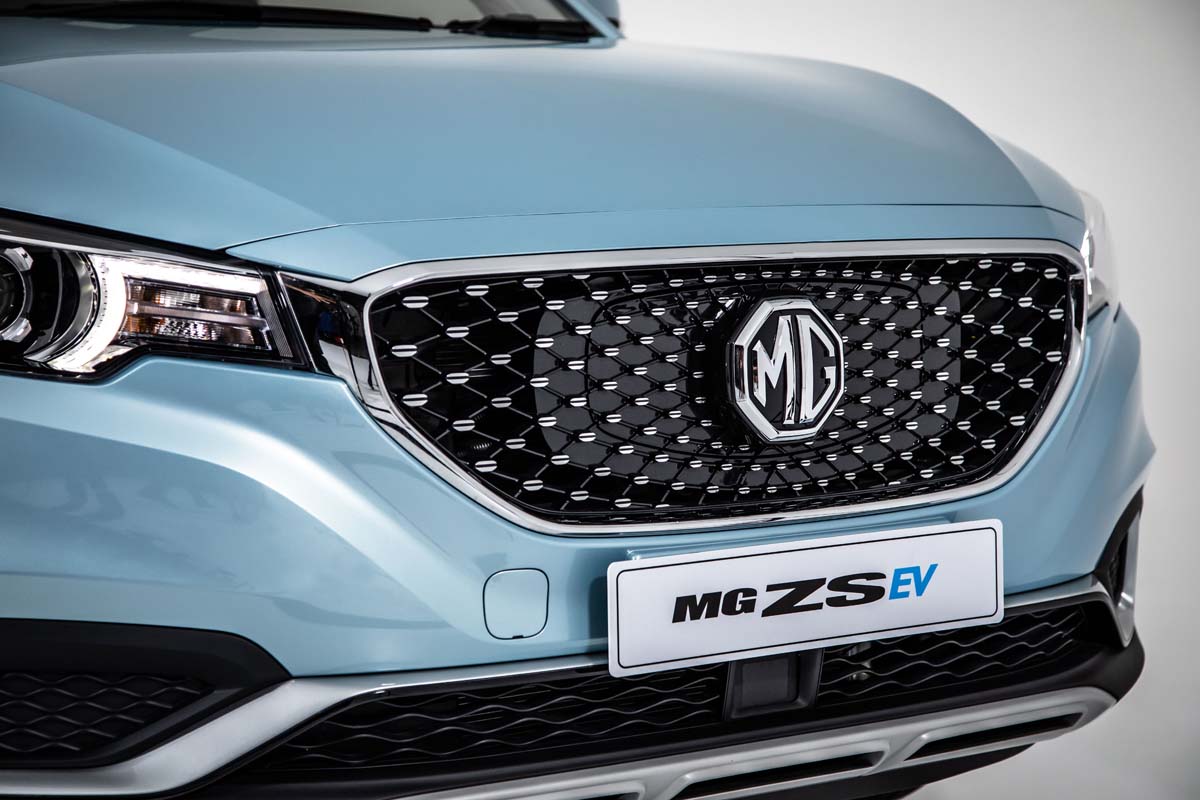 At this price point, there are no compact SUV EVs, with just the Kia e-Niro on the horizon. The Hyundai Ioniq electric will be almost eight grand more to get on the road and the same company’s Kona electric is an easy twenty grand more for more range (450km), a smaller boot but a better interior.

The Nissan Leaf is closer in price and range but isn’t the high-riding SUV that the ZS is. If you can find a ZOE still kicking around in the dealer network, you might get a deal, but it’s an orphan.

Whatever you’re looking at, you’re paying more and in the case of the Ioniq and Leaf, you’re not getting a heck of a lot more. The Kona is the better car but it ought to be for the extra outlay. 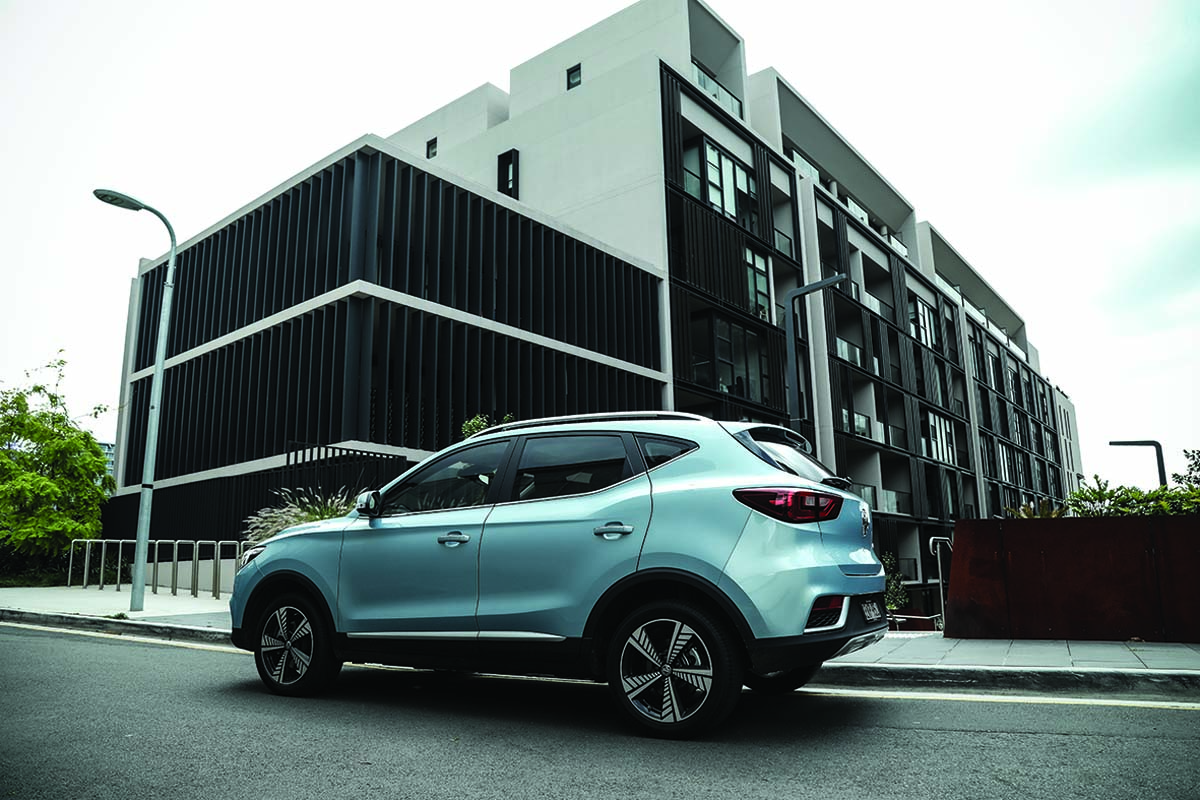 I’m not going to pretend this is the best EV on sale just because it’s the cheapest. But it’s much better than its price tag and the reputation its badge suggests. I can’t say I went in with high expectations, but the way it drove around town and on the freeway was genuinely impressive. Things definitely fell apart when I went all boy racer on it, but that’s not what it’s for, so that was no surprise.

It’s far better built than early cars from the same maker, is well sorted and good gracious, it’s a bargin in EV terms. MG is deadly serious about this car, with high sales expectations. It’s probably the only company in Australia that can charge so little (again, relatively-speaking) for an EV while also delivering what seems to be fairly solid SUVo