Still an excellent option, Ford’s new Escape is a refreshing difference in a busy segment.

If I ran Ford Australia, my patience would be sorely tested. While the Ranger and Mustang continue to be bright lights in the sales race, I put it to you that they are nowhere near the best cars Ford can offer you today. Don’t get me wrong, they’re both excellent – the Ranger is my pick of the ute brigade – especially in XLT form – and the Mustang is truly hilarious and would be a great car to own for the sound of the V8 alone.

But there’s so much more. The new Puma is a cracker of a small SUV, the Focus ST-Line is easily the measure of any comparably-priced Japanese or Korean competition, the Focus and Fiesta STs are thrilling hot hatches on a budget and the Endura is just really good. All of these cars are not bought in the numbers their success as cars suggests they should.

This brings me to the Escape. The old one, again in ST-Line, was an excellent mid-size SUV. In its latter years it looked good, drove really well and was spacious and good value, before you started bullying the dealer. Barely made a dent. But, as with the new Puma, Ford hopes to make a dent in the competition with this all-new machine, built on the guts of the excellent Focus, packed with tech and sharply-priced. Give it a year and you can buy a plug-in hybrid version, too.

The Escape range kicks off at $35,990, slightly more than most of its obvious competition’s entry-level machines but better-equipped, so the mid-spec versions of those cars are the ones you should be comparing it to.

The Blue Oval is offering customers who test drive and buy an Escape a $500 bonus as well as offering driveaway pricing. The Escape FWD will be $36,490, the ST-Line FWD $38,990 and ST-Line AWD $41,990. The following prices are MSRP when and if the introductory offers expire. 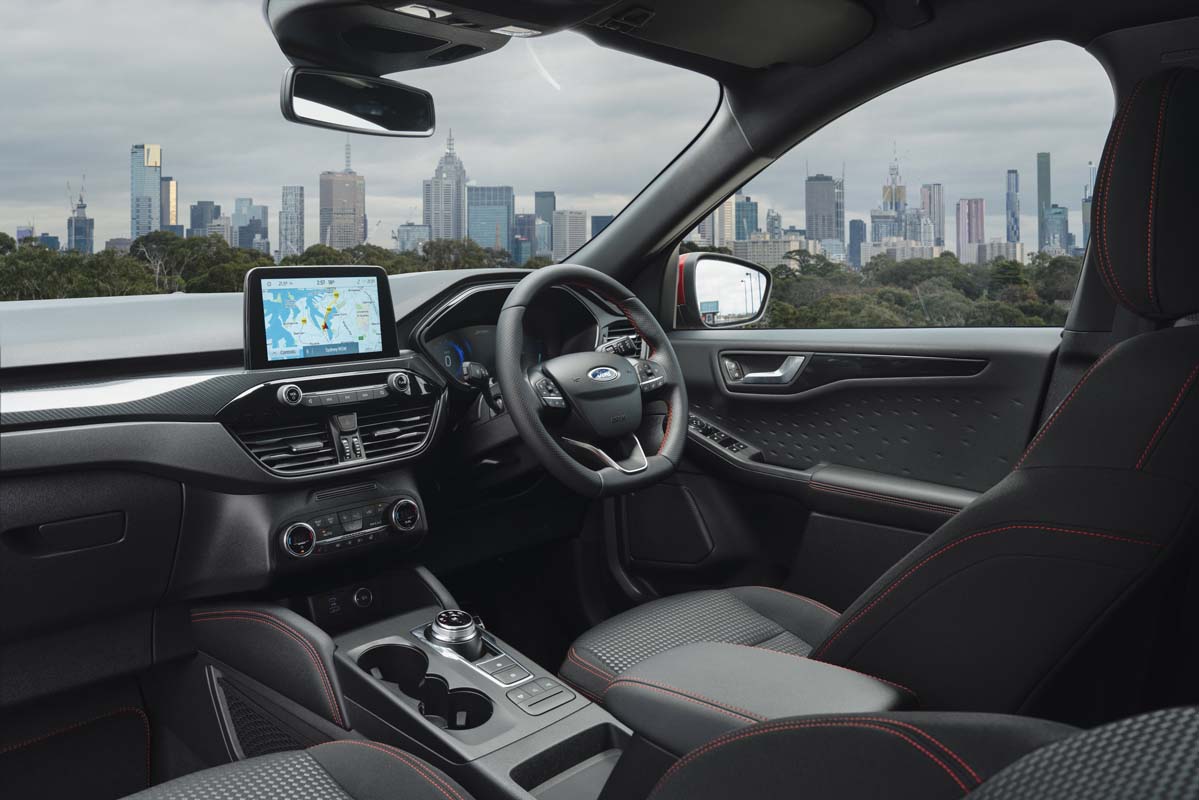 Opening the range with the Escape, you’ll pay $39,990 for 18-inch alloys, LED headlights, keyless start, wireless phone charging, reversing camera, front and rear parking sensors. The seats are covered in cloth but the wheel is leather or at least convincing fake leather.

The Technology Pack costs $1,300 and upgrades the headlights to active matrix LED you get an autocue-style head-up display inside. Another grand on top of that gets you a foot gesture-activated power tailgate. 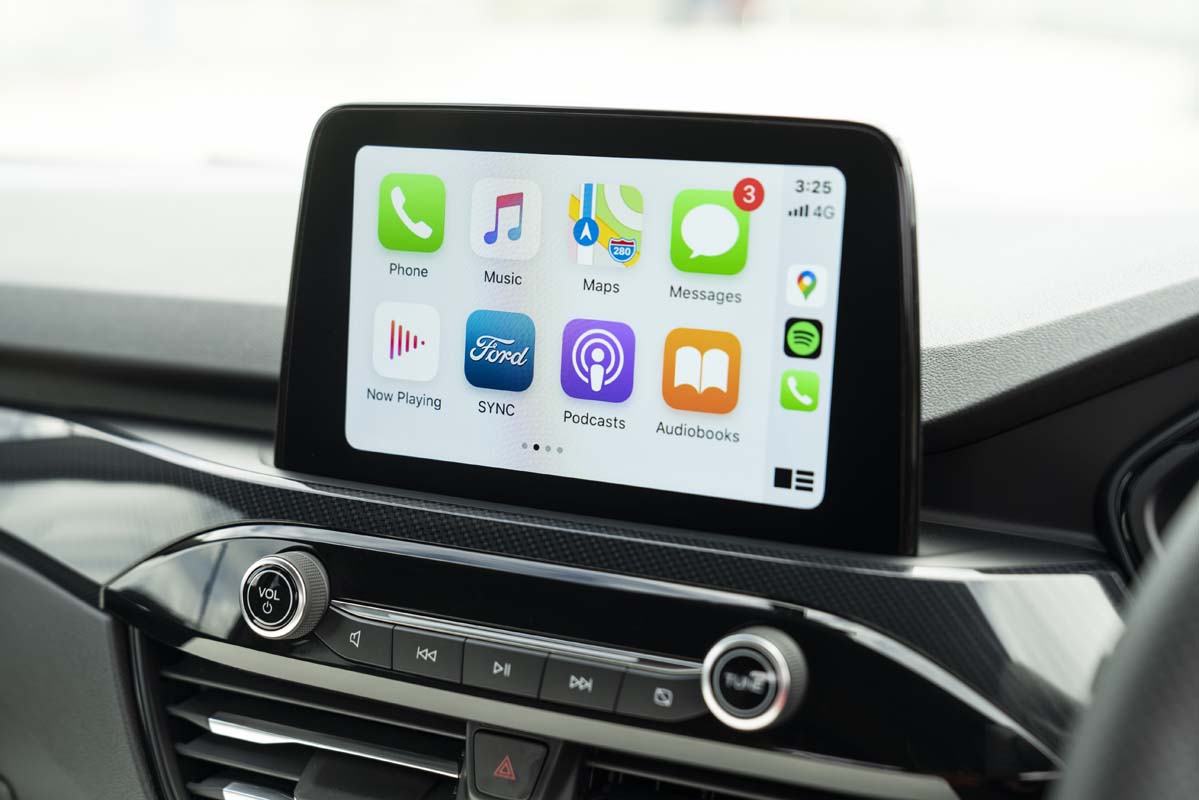 Added to the base Escape you get different set of 18-inch alloys fitted with grippy Continental tyres, a sportier grille, front and rear bumpers, rear wing and side skirts. The ST-Line rides on lower sport suspension and looks like it does too.

You get a 12.3-inch digital dash, flat-bottomed steering wheel and “metallic” sports pedals added to the mix. 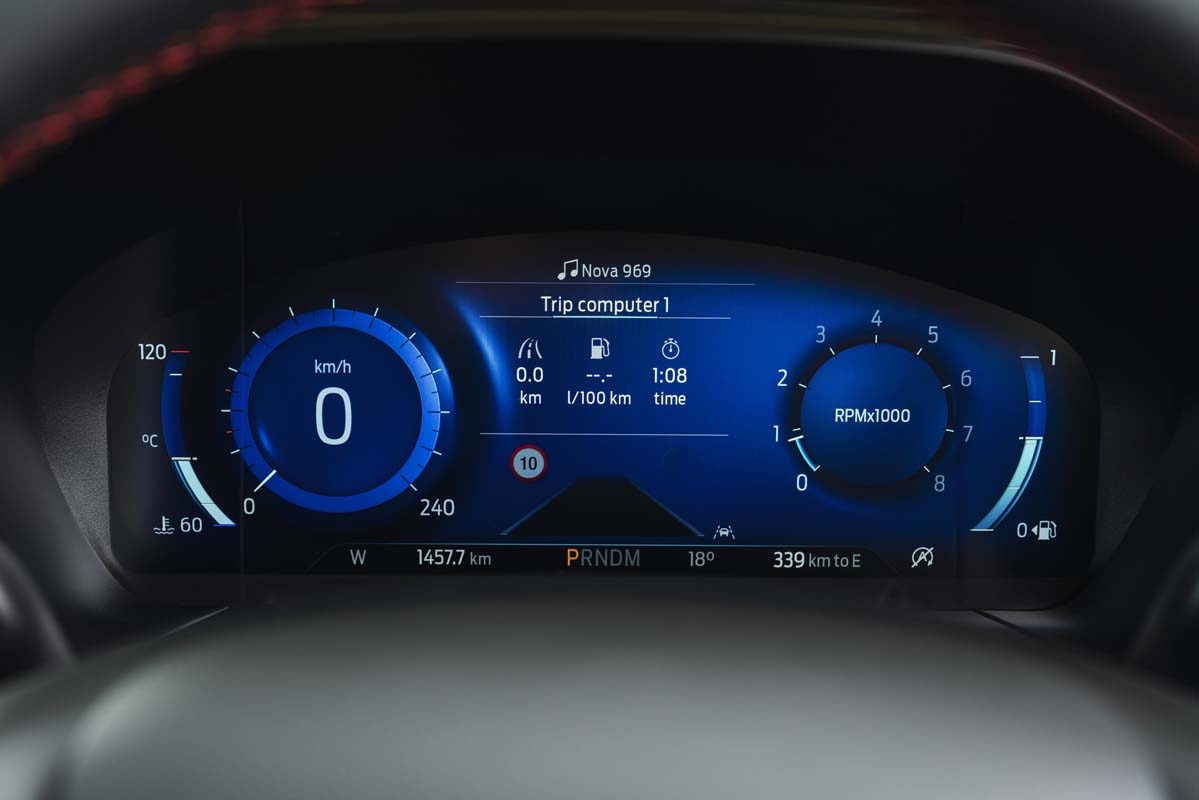 Bizarrely you can order the ST-Line pack for your ST-Line, which packages up the base model’s Technology Pack, foot-waving tailgate and adds heated front seats. 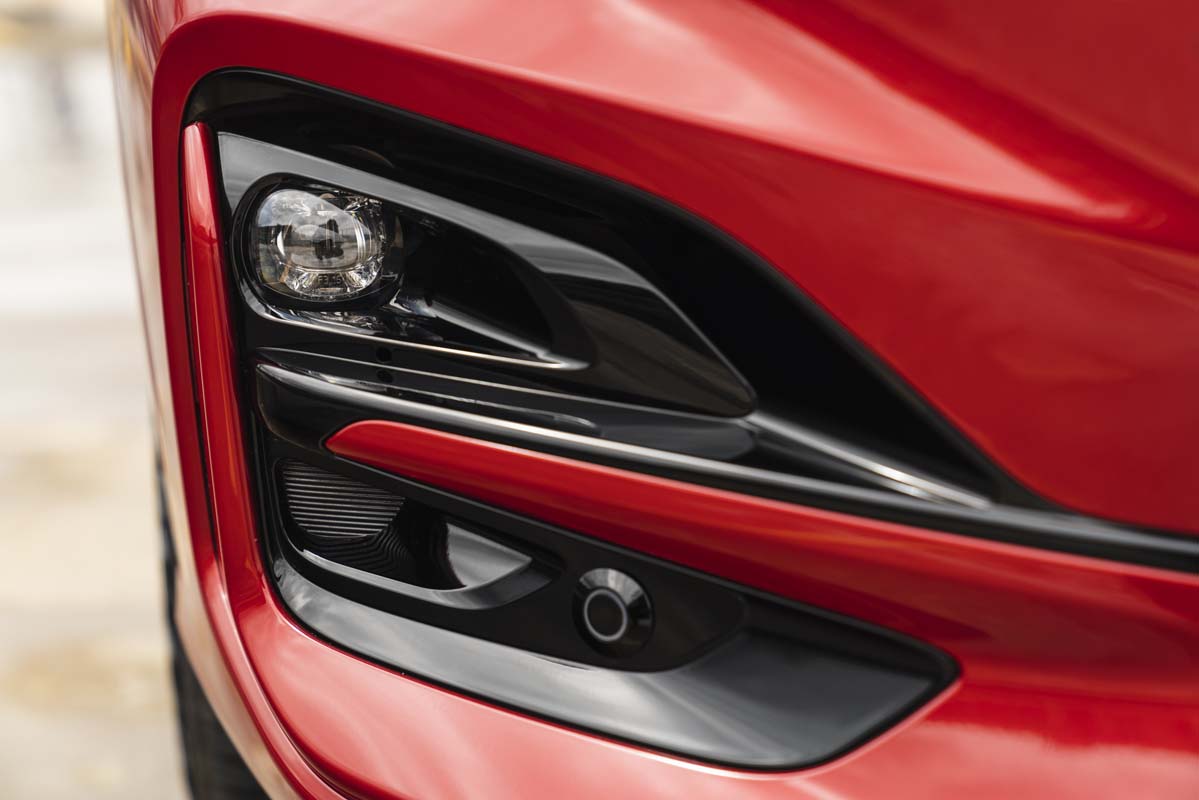 Ford offers a very handy five-year/unlimited kilometre warranty along with a capped-price servicing program. The first four services are capped at $299 each, up to four years or 60,000km. You’ve probably already done the maths and worked out that service intervals are set at 12 months/15,000km.

Ford gives you a motoring association membership (NRMA, RACV etc.) which also includes roadside assist and a loan car when you’re in for a service. You have to get a Lexus for that last thing. 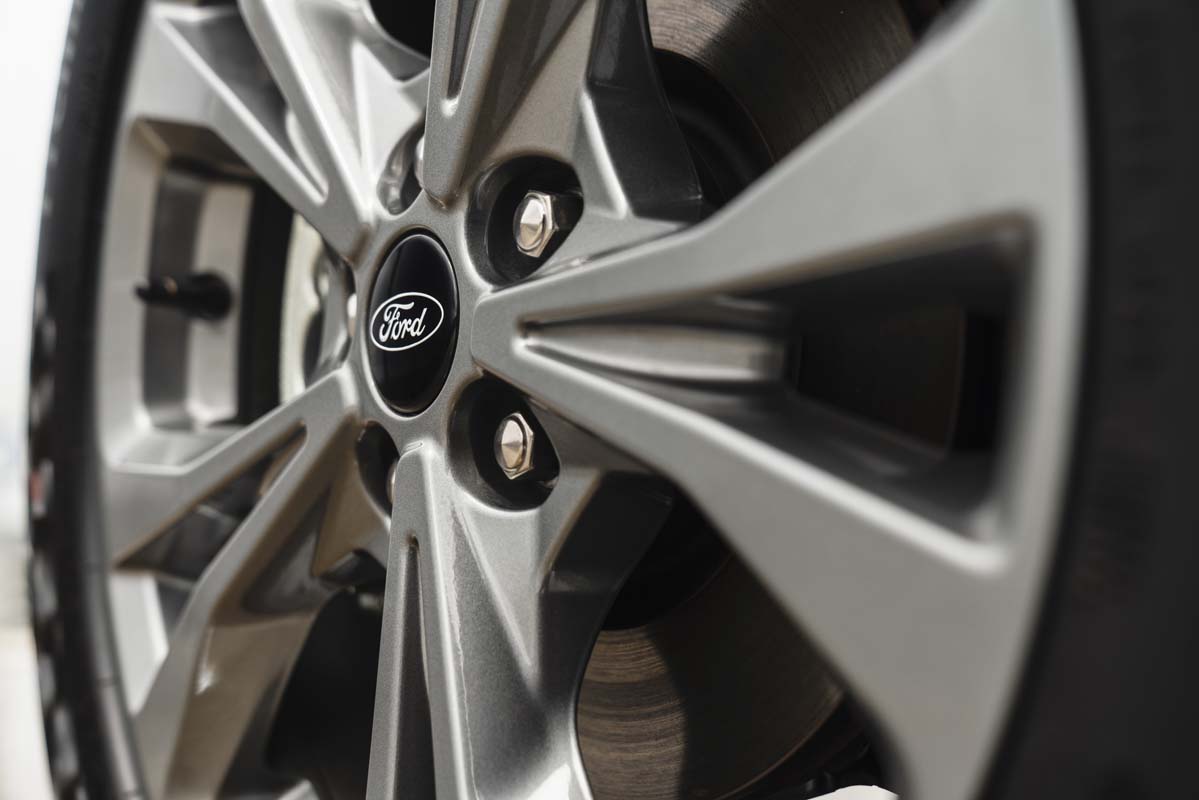 Like its little sibling Puma, the new Escape is a muscular-looking car. In lowered ST-Line form, the car I drove, it looks ready for action. There is some really lovely surfacing on this car, like it’s all pumped up and ready to rumble. Some of the plastic bits are a big naff when you’re up close, but on the whole, it looks good.

Only mildly jarring bit is the really high-profile tyres on the 18-inch wheels. They look a big baggy and not very sporty, but this isn’t an Audi with air suspension, so 35-profile tyres would be unbearable. 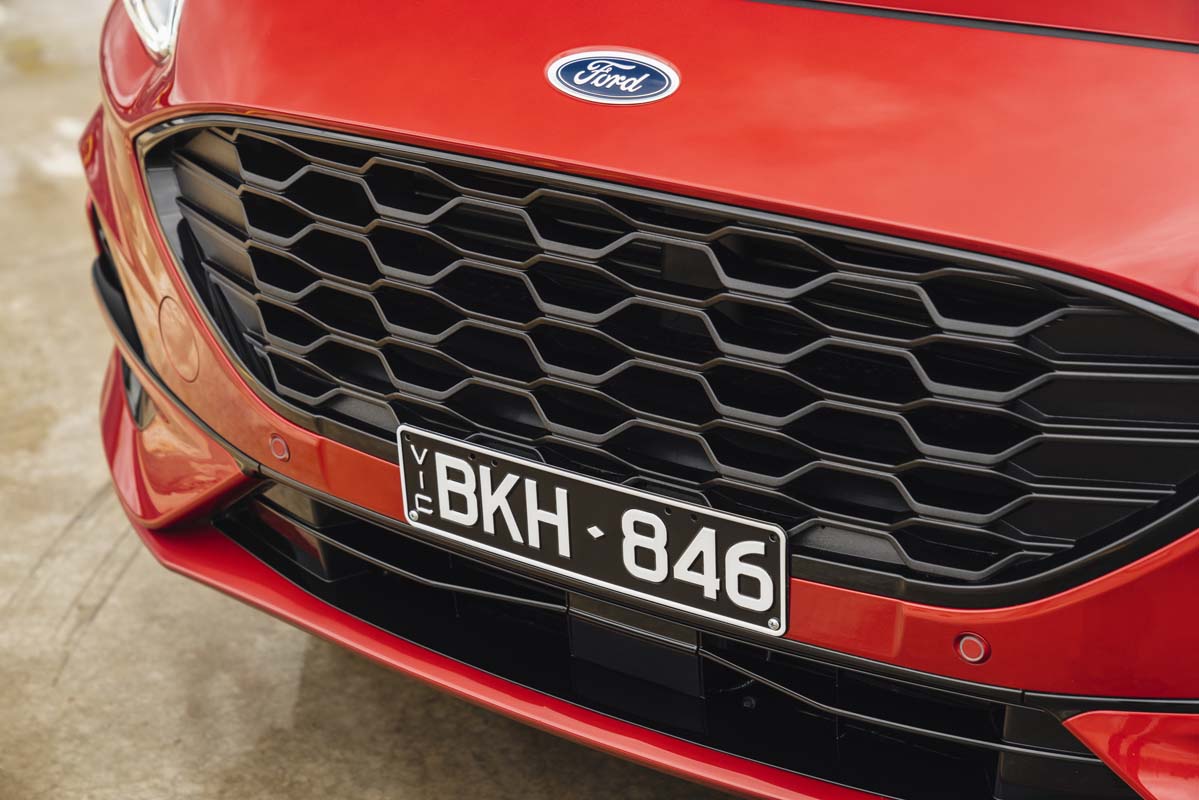 This interior feels like a good step up on the old Escape. It’s a familiar layout to the Focus (it does roll on the same C2 chassis) but with the added bonus in the ST-Line and Vignale of a really nice digital dashboard.

It’s a little on the dark side and – again – the ST-Line’s charcoal grey seats with similar headlining could do with a splash more colour, but you do get some nice red-stitching about the place. 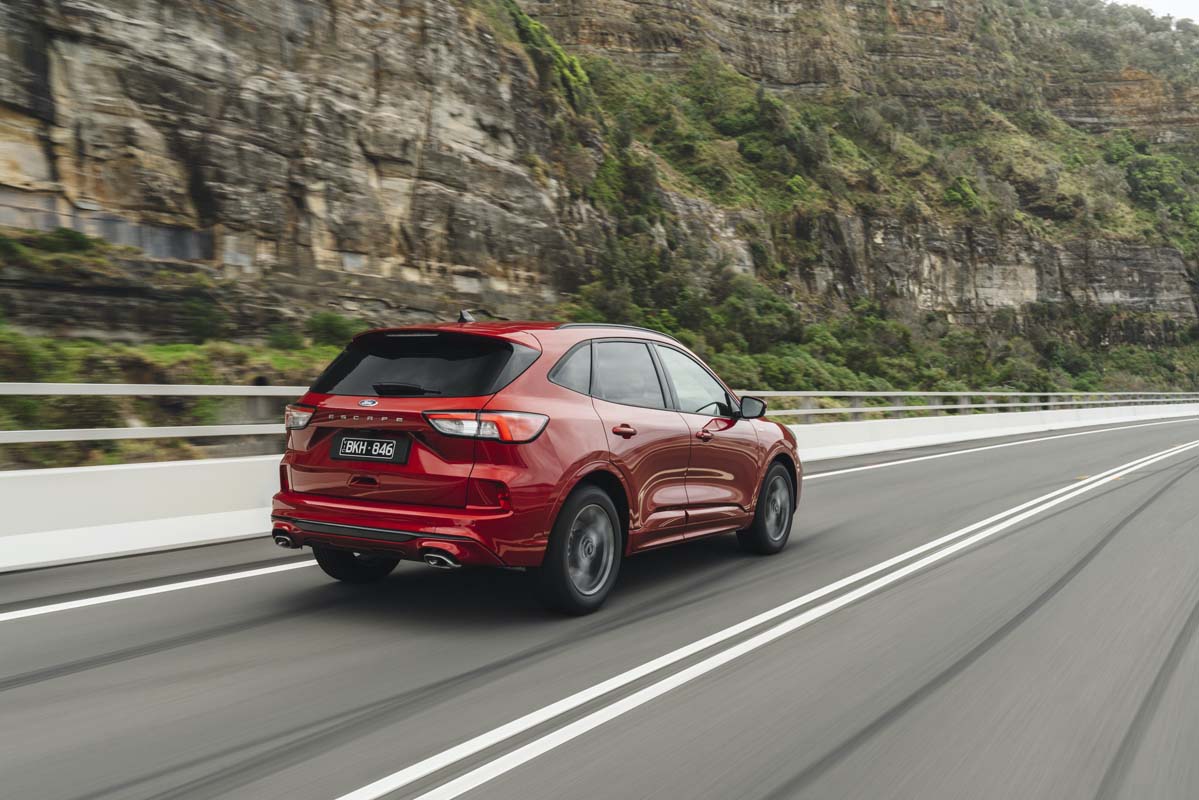 The seats are very comfortable front and rear although I’d really like it if the front seats went a bit lower. I’m not very tall – 180cm – and I felt like I was sitting an inch or so too high. Nothing dramatic and the car itself is not up on stilts, so it’s not a deal-breaker.

The rear seats are very comfortable, too, with plenty of leg and headroom. You could get a third person in the middle, but it’s a squeeze, but that’s nothing new to this class. 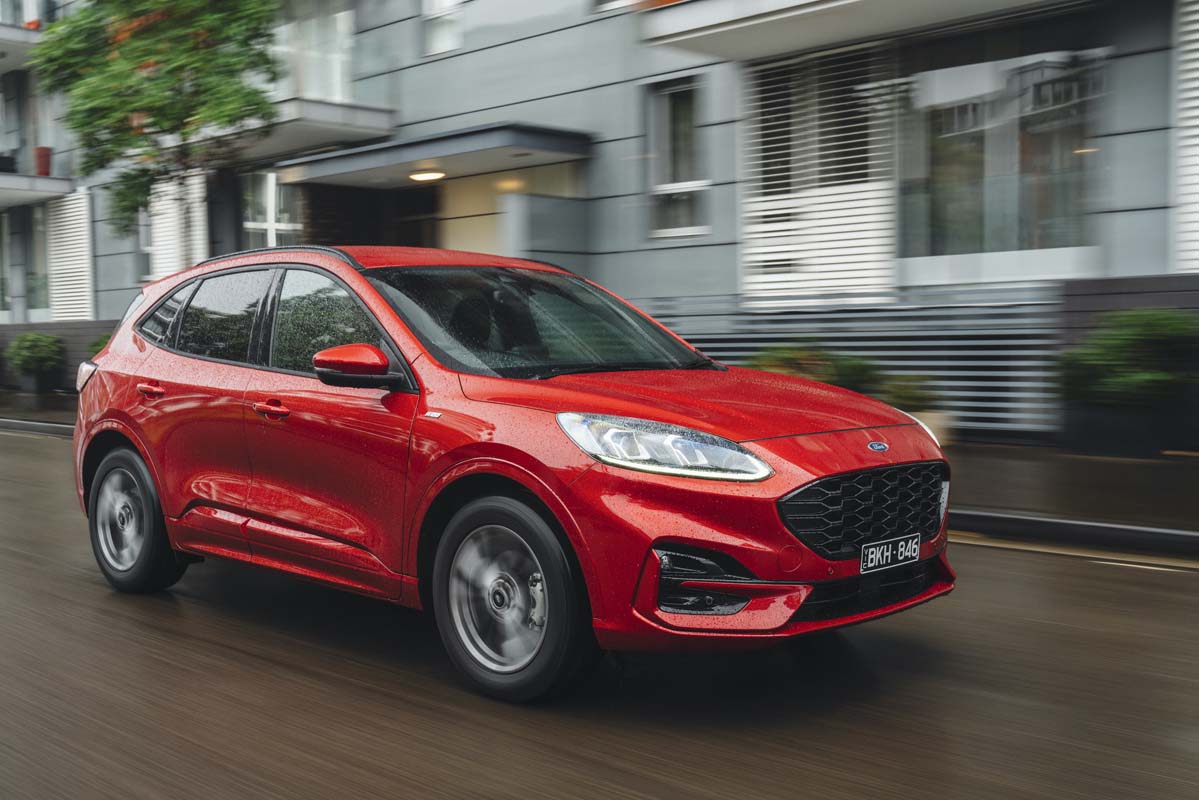 All Escapes use Ford’s SYNC3 system via an 8.0-inch touchscreen. On top of the basic USB or Bluetooth connectivity, you get DAB+ radio, Apple CarPlay, Android Auto and sat nav.

FordPass Connect uses an embedded data modem to enable app connectivity to the car. You can use it to lock or unlock remotely and the app also allows you to call roadside assistance or book a service. The app also has things like service history and connectivity with a Ford Guide helpdesk person.

PHEV owners will find extra info such as navigation to the nearest charging point and the app will show you the level of charge, charging status and let you remotely activate charging (if the car is plugged in). 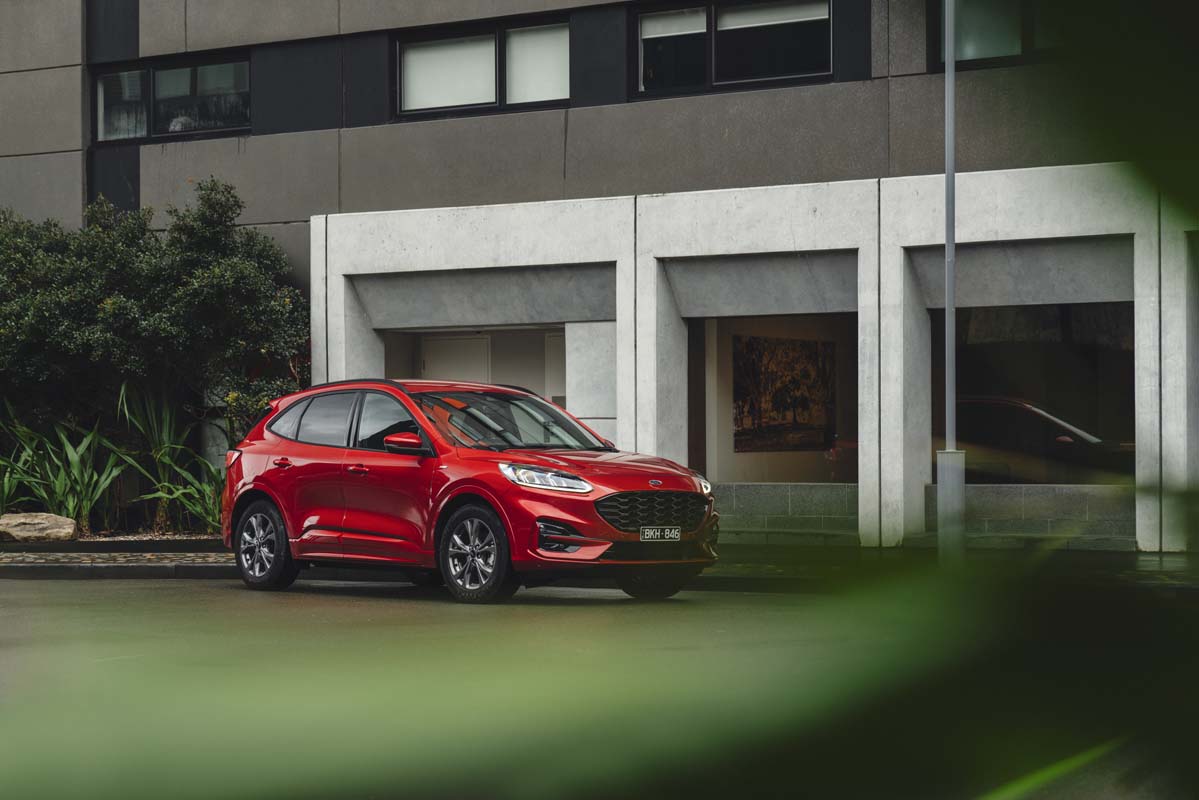 The Escape isn’t a massive car but has a remarkably handy 556 litres of boot space, rising to 1478 litres with the split-fold rear seats folded away.

Annoyingly, the rear seats don’t have either an armrest or a cupholder in the basic or ST-Line cars’ rear seat and I assume it’s the same for the Vignale. The doors do have cupholders and added to the bottle holders in the front means there are four in total. The front seat thankfully has cupholders and a small centre console bin with a handy tray on the top. You also get somewhere sensible to put your phone which also has a charging pad. 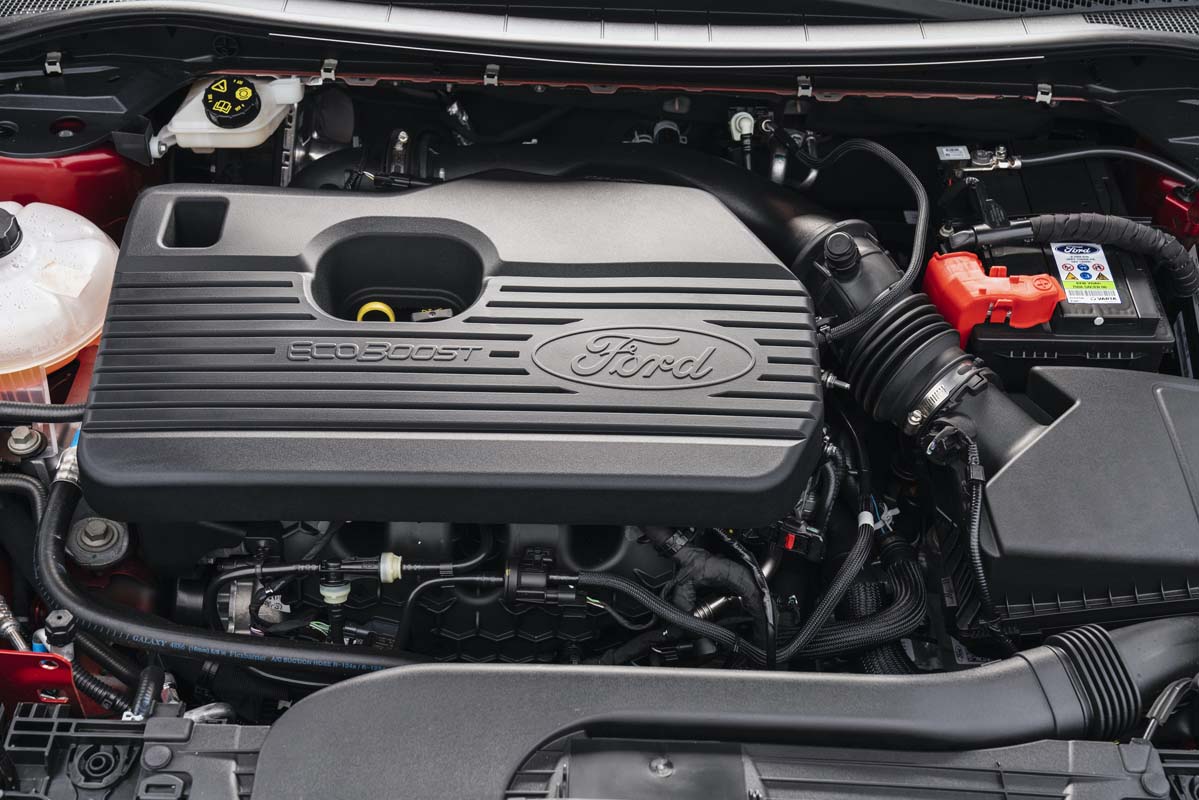 At launch, all Escapes get the punchy 2.0-litre turbocharged four-cylinder EcoBoost. Unlike most of its competitors, it punches out an impressive 183kW and 387Nm. Power goes to the front or all four wheels through Ford’s very good eight-speed automatic.

Ford claims the Escape will drink 95 RON fuel at a rate of 8.6L/100km on the combined cycle. Amazingly, I got 8.7L/100km, which is one of those very rare occasions. 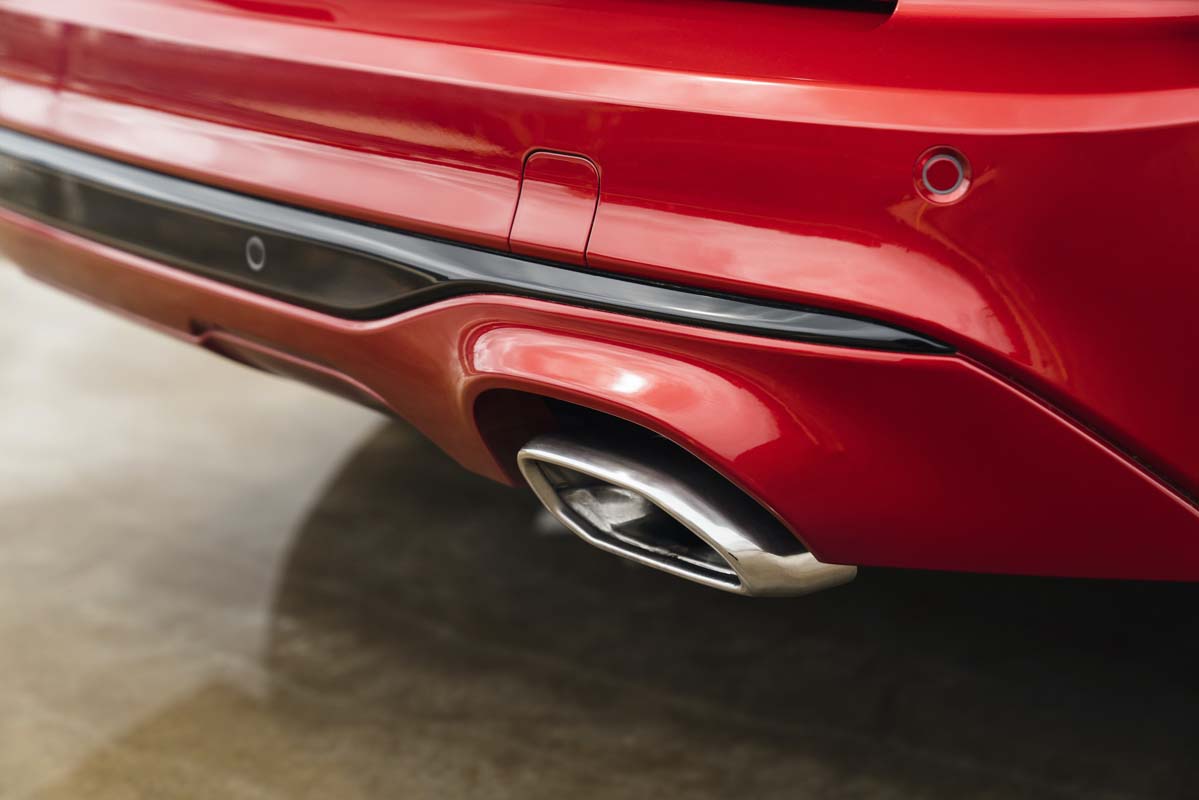 Terrific fun. The throttle is very lively and a flattened foot delivers an almost indecent turn of speed for a mid-size SUV. It doesn’t sound like much, but it grips and goes with the eight-speed shifting quickly through the gears.

Building on that, the ST-Line’s lowered and firmer suspension deliver a firm ride but really fun handling. The nose points when you turn the wheel, the fast steering rack probably not at all suited to the mythical off-road trip you’ve been planning all these years. 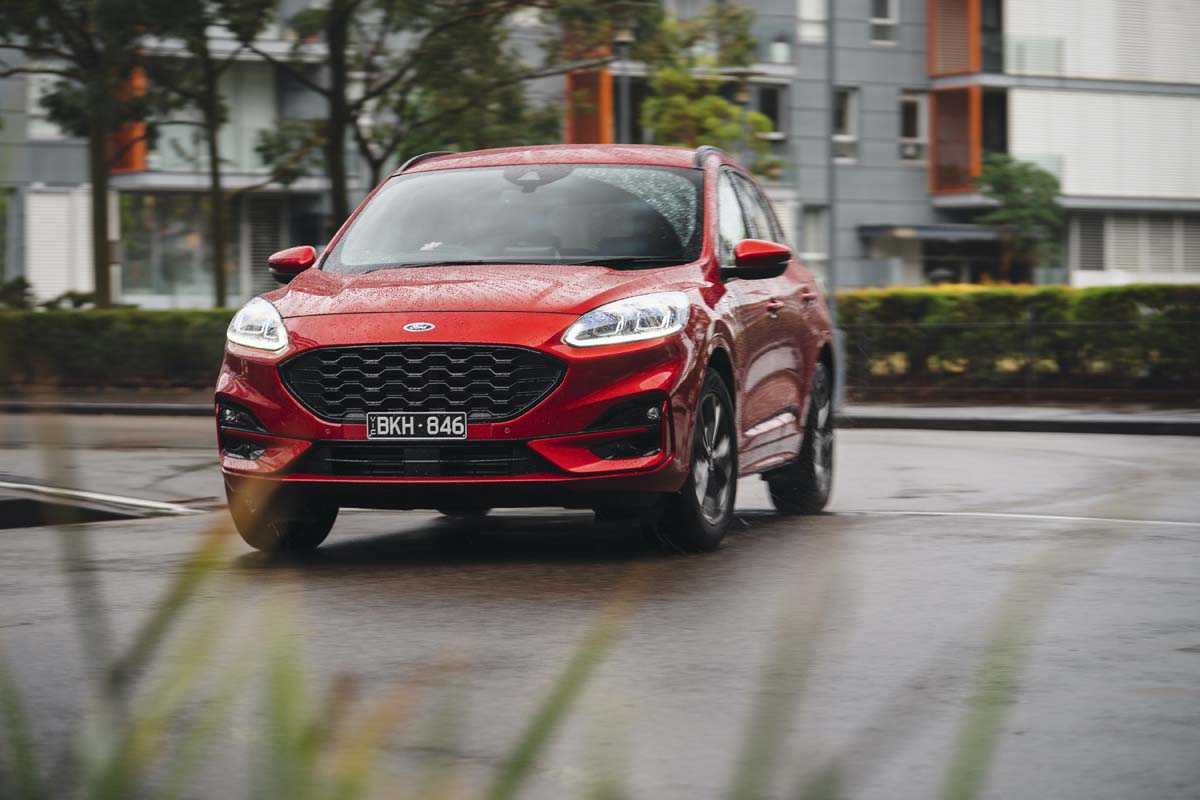 Sydney’s horrifically scarred M4 Motorway made for a noisy ride, with a fair bit of tyre roar trying to drown out the stereo. Once I got on to smoother roads, though, the noise disappeared as did the slightly jiggling ride. There is a price to pay for that handling and it’s definitely the firm but never harsh suspension.

Ford says the new Escape is up to 90kg lighter than the previous car and I reckon you can really feel that in the sprightly acceleration and see it in the fuel figures.

Around town it’s a bit of a weapon, with so little turbo lag and a gearbox that tends to be in the right gear at the right time.

This isn’t an off-road review as the ST-Line in particular with its low ride height isn’t really that kind of car, especially in front-wheel drive. 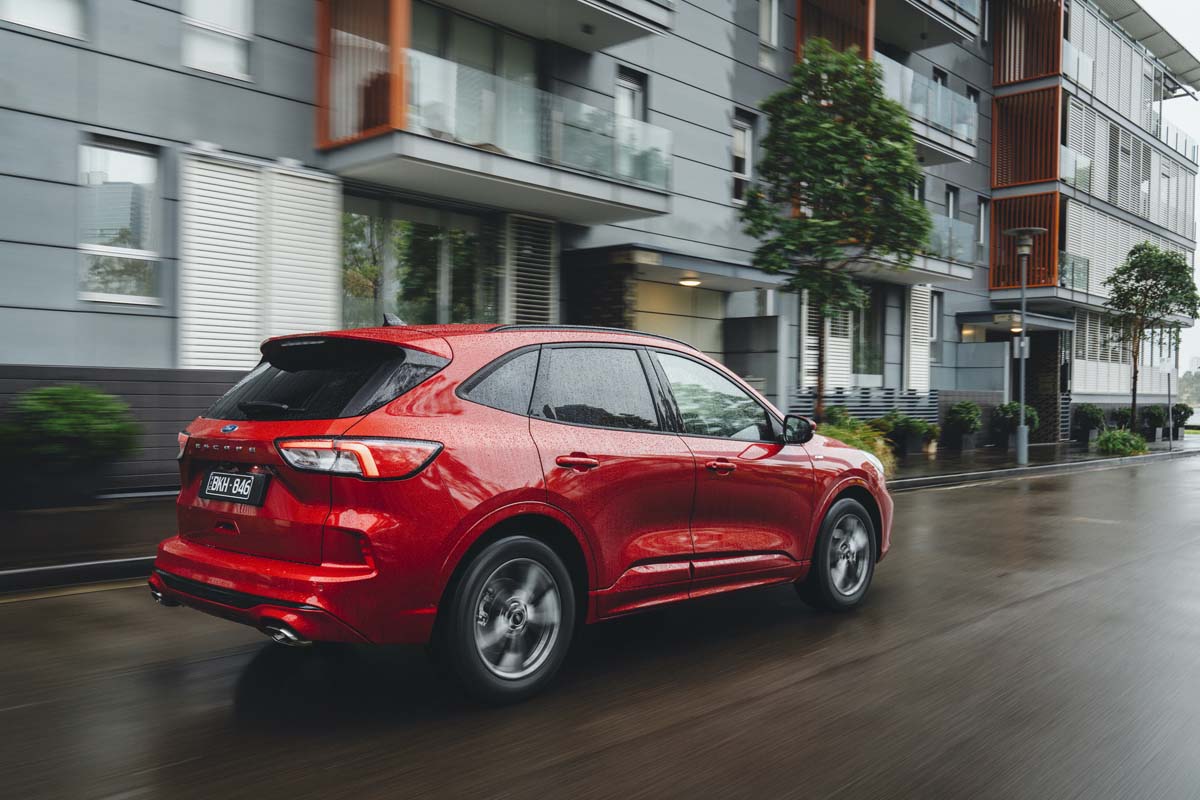 HOW SAFE IS THE ESCAPE?

You also get three top-tether and two ISOFIX restraints.

The Escape scored five ANCAP stars in October 2019 via ANCAP’s agreement with EuroNCAP. 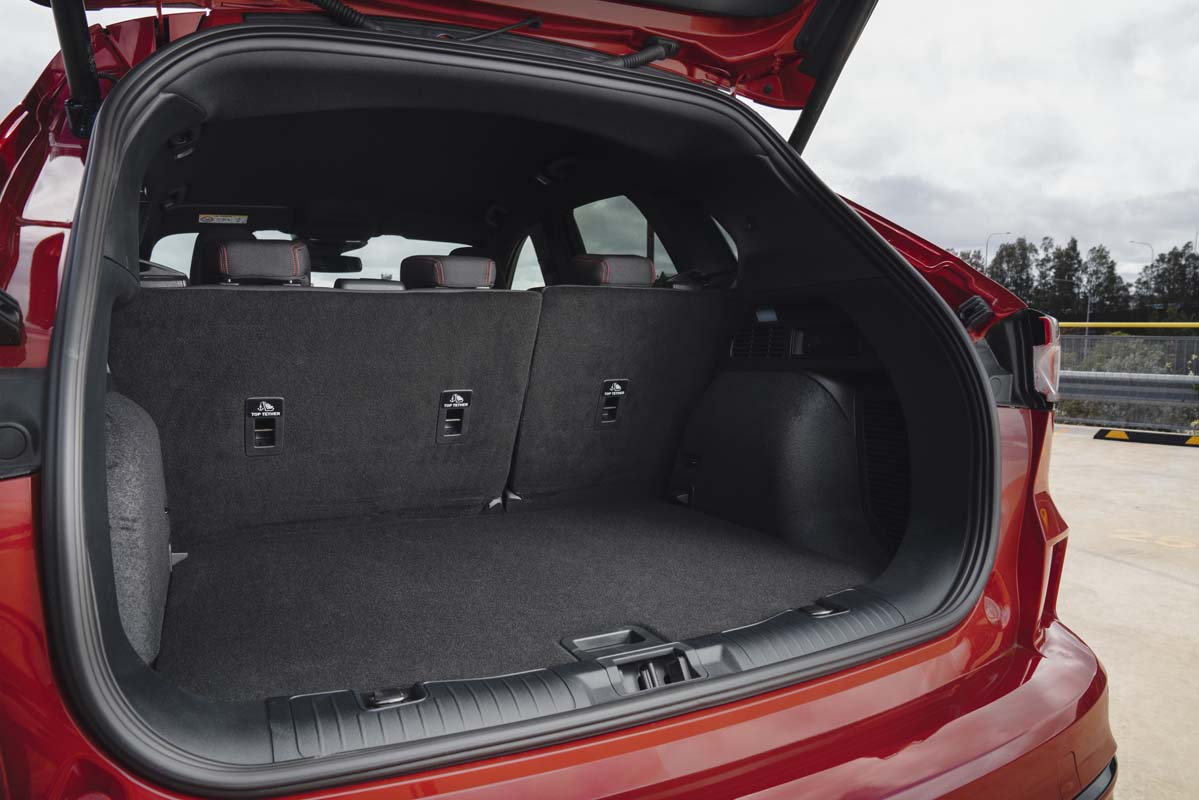 Crikey. There are many.

Mazda’s CX-5 remains a very strong contender despite being one of the smaller in class. But it looks great, is sharply-priced and has found a very strong place in the market. The engines aren’t as strong as the Escape’s 2.0-litre turbo (with the exception of the lovely SkyActive 2.5-litre turbo) but it’s a compelling package.

The VW Tiguan is also extremely strong. It’s larger and generally pricier but is packed full of stuff and has a that tricksy sliding back seat. It also drives extremely well and has that quality VW vibe. Capped-price servicing is a little bit more expensive but lasts for another year if you buy a plan. 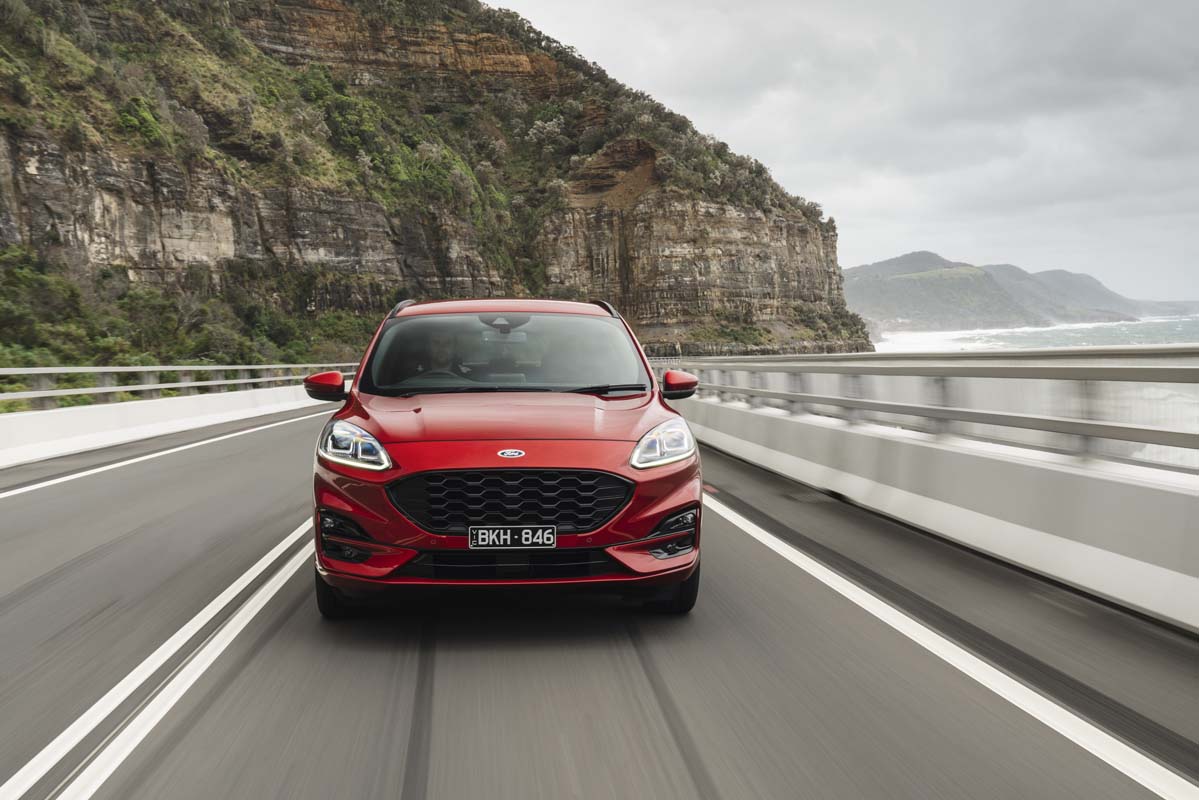 The Toyota RAV4 is very good in its latest incarnation although none of the available engines have anything like the punch available from the EcoBoost. Three-quarters of RAV4 buyers are hybrids so the extra you spend on the Toyota will save you some fuel money. Doesn’t handle as well, though and the interior is a bit drab

The two Korean contenders are shortly due for big upgrades. The Kia Sportage is cheaper but smaller and less well-equipped with old engines to boot. It does have a long seven-year warranty, though. Hyundai’s five-year warranty on the Tucson is good but the older car is on borrowed time and not quite up with the Escape’s tech and punchy engines. 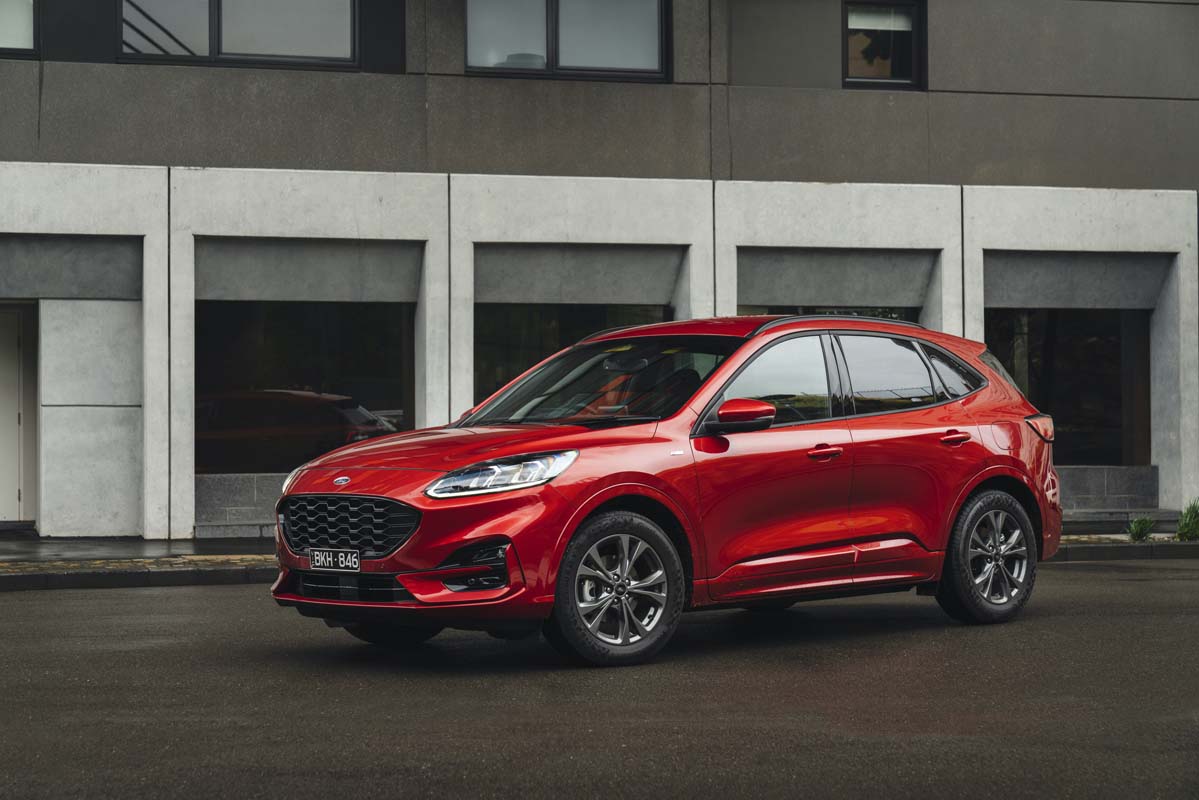 The Escape is an impressive continuation and improvement of form from the Ford Motor Company. While it’s disappointing we’re going to have to wait longer for the PHEV version, the ICE Escape is just fine.

Quick, composed and fun for an SUV, it’s like an overgrown hot hatch for people who don’t want to leave that kind of performance behind when they go for something bigger. The old ST-Line was a good car and this new one is a lot better, with an even better chassis and a proper sporting feel. This is the pick of the Escape range and you’d only pick the AWD if you really want it or you’re planning on some mild off-road shenanigans.