They may well call the LandCruiser “King Off The Road,” but the real monarch of the Toyota range is more like a working class hero.

The HiLux has returned to its - some in Toyota Australia would say rightful - place at the top of the LCV sales sheets, and as has been well reported, it was also our top-selling vehicle across all categories last year. But the HiLux’s dominance is nowhere near what it once was …

Faced with first class opposition from a horde of revamped and renewed tray-backed product, the current HiLux was certainly a long time in the making (a decade, in fact), but if sales numbers are anything by which to go by, most Aussies reckon the eight-generation version was worth the wait.

Endowed with an elongated snout that is poking straight into the blunt and brawny face of the Ford Ranger, the battle for LCV supremacy was keenly contested between these two rivals last year and is well and truly on again in 2017, as recent sales data has shown. 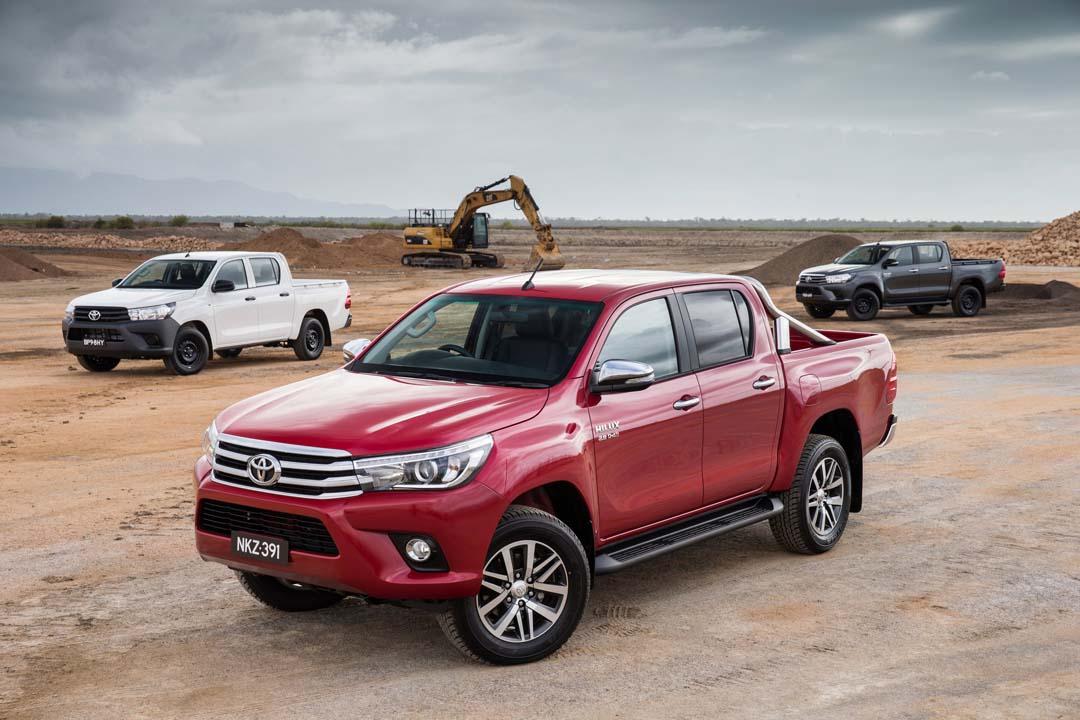 SR5 to the Fore

In flagship SR5 form, the HiLux is a $55,990 proposition when fitted with the six-speed auto - not a small amount of money, but there have been upgrades to put that premium pricing into perspective. Top of the list is the change to the 2.8-litre turbodiesel particle-filter equipped four-cylinder. This is shared with the Prado (although there are balance shafts in the SUV’s version), but produces 130kW and 450Nm in the HiLux; a 25 per cent improvement in torque over the previous version and 20Nm more than with the six speed manual model, on offer between 1600 and 2400rpm. 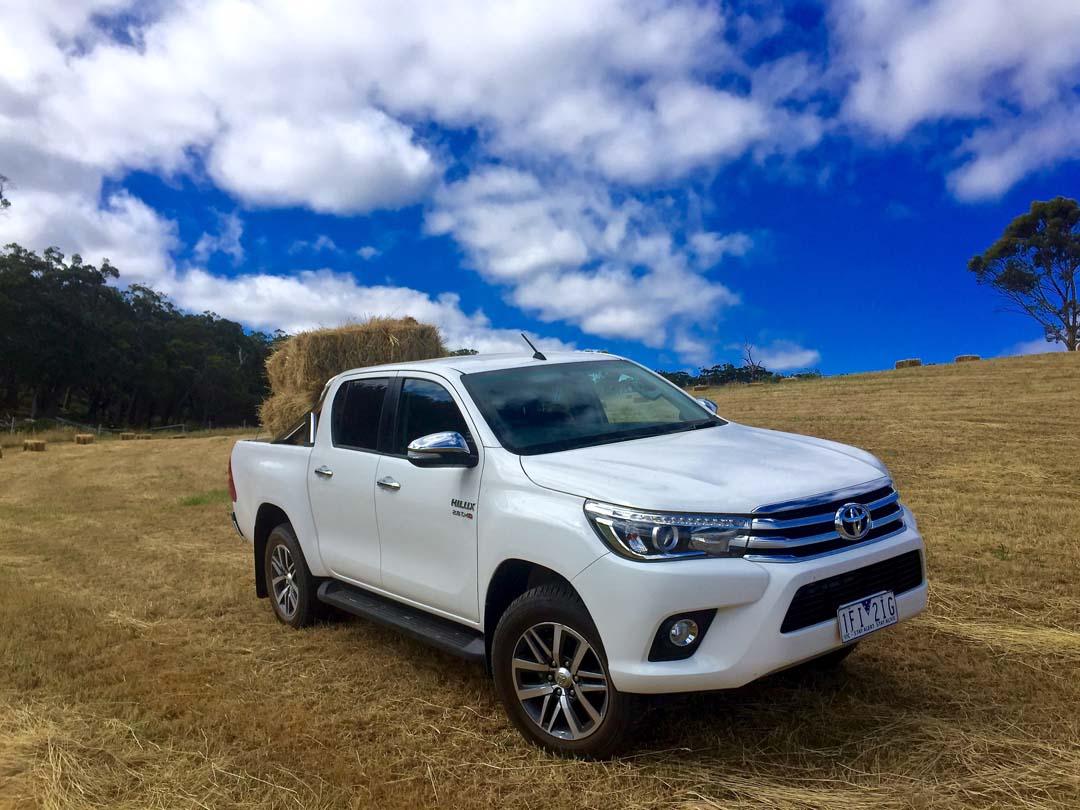 The broader torque range is immediately apparent on the road and it’s noticeably improved under load, too, with a strong in-gear surge. Throttle response is further sharpened to good effect using the ‘Power’ mode, but it’s not overlay tardy in the normal mode, either.

The six speed auto has a broader ratio spread than the auto in the old HiLux and lays claim to improved frugality of 8.5 litres per 100km from the 80-litre tank, despite this latest generation version being longer, wider and 210kg heavier at 2075kg. The paunch has been gained in the course of a 20 per cent improvement in torsional rigidity.

After our time in the ute, that saw us cover a variety of terrains and conditions, lugging loads and getting off the beaten track as well as commuting chores, the trip computer finished with 11 litres per 100km. 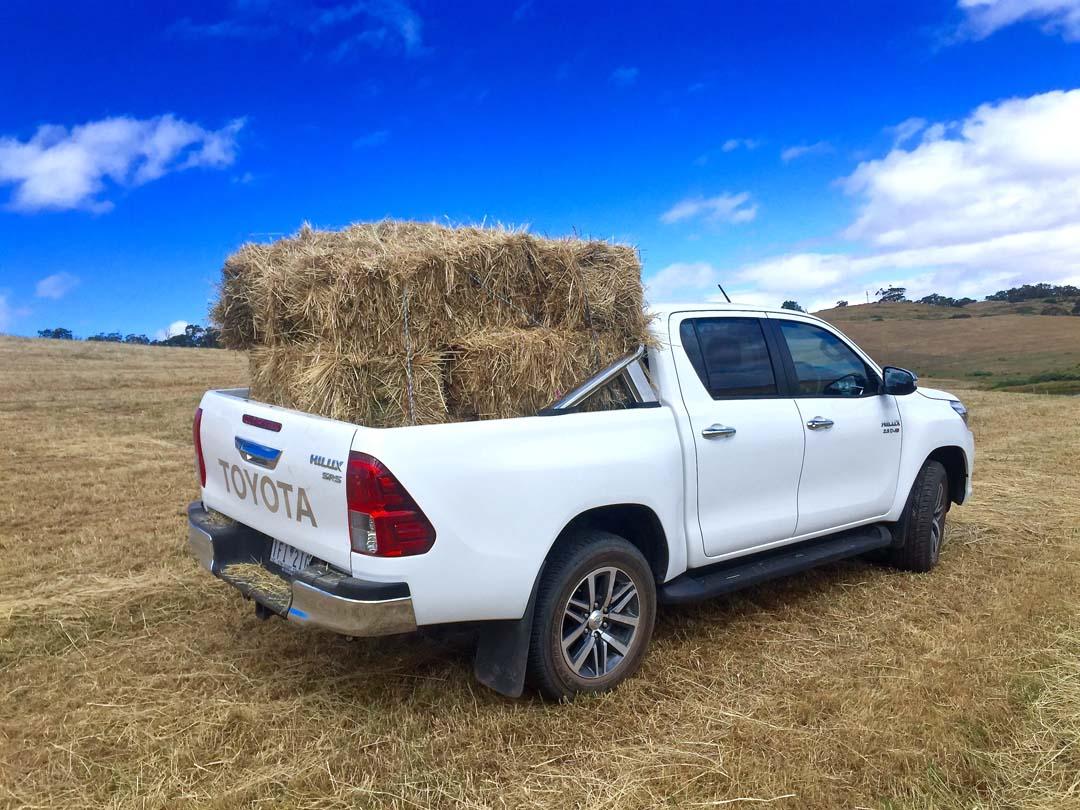 Also on the “new” list for this latest HiLux is a thicker front stabiliser bar, longer rear leaf springs and larger-diameter dampers, as well as an upgraded safety features list.

A reversing camera is standard fare range-wide, as is reach and rake adjustable steering - features still not offered by many of its key opposition. 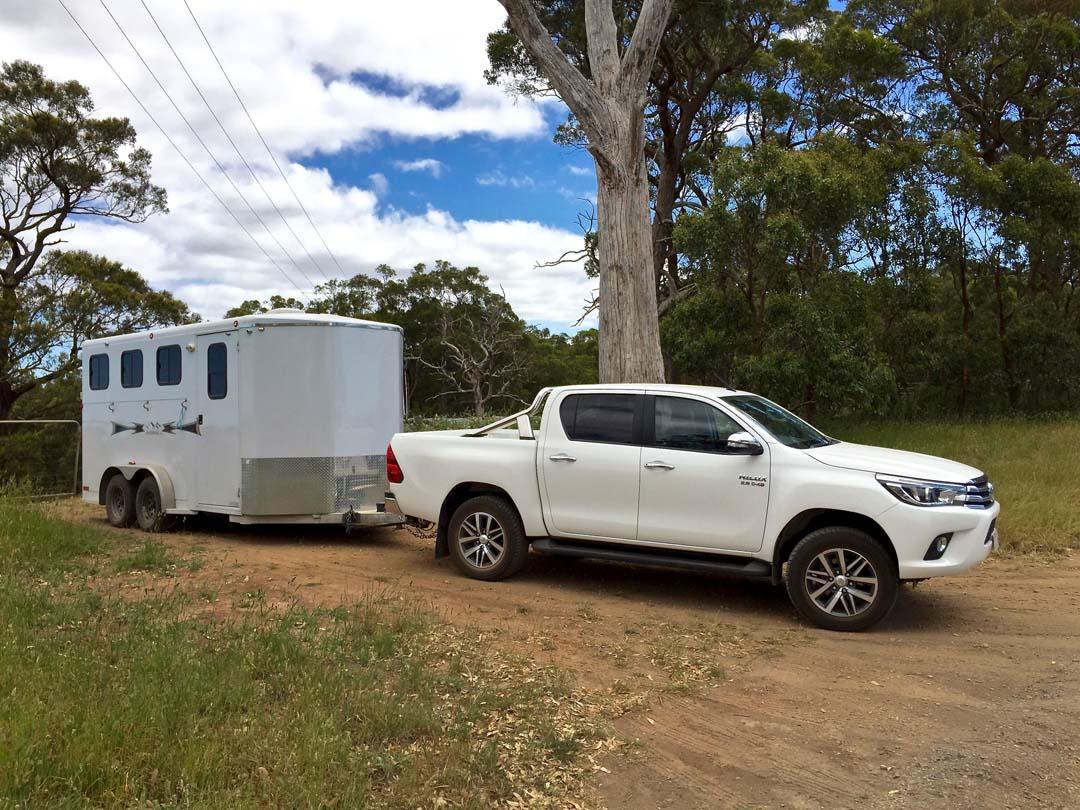 The HiLux’s part-time 4WD system is shift-on-the-fly, but it doesn’t allow for 4WD on sealed surfaces, which is an advantage when towing or on slippery bitumen; a feature that Mitsubishi’s Triton offers in its top-spec variants.

The SR5 sits on standard 18-inch alloy wheels, wrapped in road-biased rubber. The combination is quiet when operating as a freeway cruiser – even for a workhorse ute - although the four-cylinder diesel’s thrum does become apparent under acceleration.

Cabin comfort is good, offering sufficient room for four adults, although family users get a child seat anchor strap instead of a solid hook, similar to that used in the Navara; both are fussy and not easy to use and the author’s personal preference is for metal hooks. 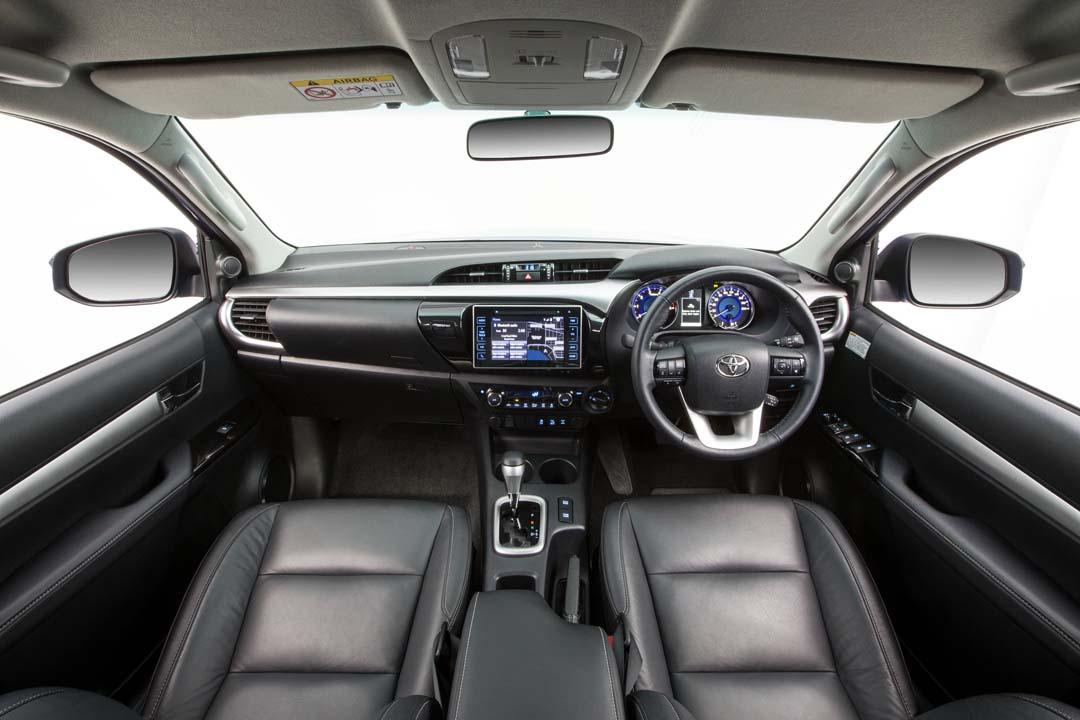 The SR5 illuminates the road with LED (low-beam only, halogen high beams don’t blend well with the LEDs) headlights and has all the features you’d expect in a top-of-the-range model, like keyless entry and ignition, digital radio reception and satnav within the touchscreen-controlled infotainment system. A small gripe with the latter is that it can suffer in direct sunlight, especially if sticky fingermarks are spoiling the view.

You also get climate control, a leather-wrapped steering wheel, side-steps, a 220-volt domestic plug for charging devices in the centre console and 12-volt outlets - all worthwhile for off-road accessory power.

The test vehicle was also fitted with an option pack - that added $2,000 to the SR5’s pricetag – and included power-adjustment to the driver’s seat and leather trim. 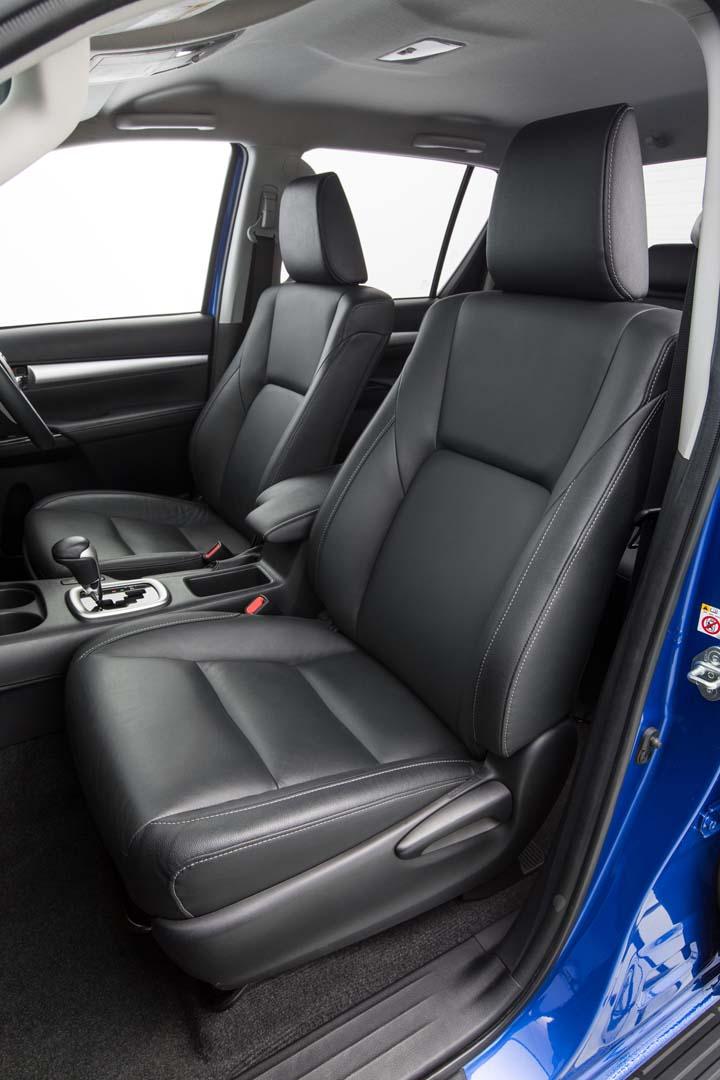 The off-road side of the HiLux spec sheet shows a low range transfer case, some clever electronic traction aids and a standard rear differential lock, all of which helps get the big ute a long way off the beaten track.

As long as you’re not in a hurry, though, as neither the diff lock or the transfer case set engage in a speedy or consistent manner.

Where the Australian arm of the Japanese giant have had some input on the current HiLux is underneath, where a locally-developed underbody kit gives an extra bit of reassurance.

Toyota is claiming 279mm of ground clearance, although a revision of its wagon sibling Fortuner’s clearance to 225mm soon after launch cast some doubt over the HiLux number, but the brand maintains that 279mm is the correct figure for the HiLux. 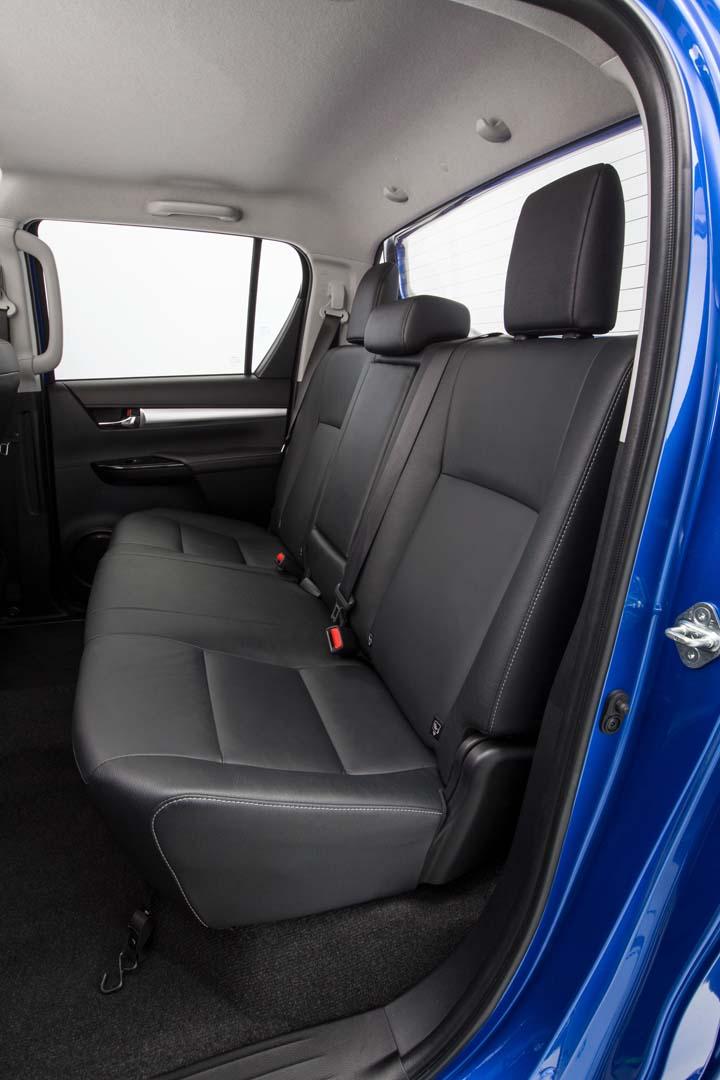 The bulging nose hasn’t degraded the approach angle of 31 degrees, with a departure angle of 26 degrees giving confidence when approaching sharp, steep terrain - it clambered over rough stuff with a minimum of fuss beyond the scrabbling of those bitumen-biased tyres.

The electronics groan sporadically when assisting the compromise rubber, but for the most part the dual-cab climbs without complaint, with better travel from the leaf-sprung rear end.

The HiLux tray is useful without being as big as the Ranger or Amarok, with a 925kg payload. When empty, the ride is acceptable, improving once a couple of hundred kilograms has been thrown in the tray.

The towing brigade will want to take note that only the HiLux manual rates at 3500kg; the auto slips the braked towing capacity back to 3200kg, despite having more torque than its three-pedal sibling. 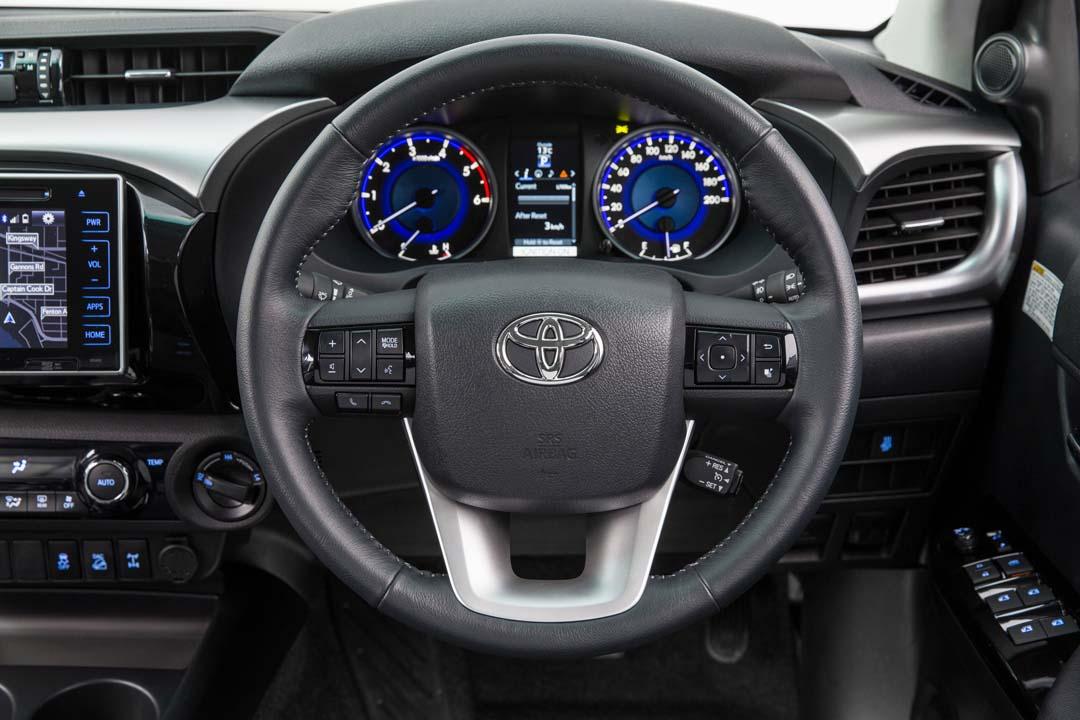 The latest HiLux is a much better beast than its ancestor, but has failed to take top spot as the segment leader in anything apart from sales - the dual-cab ute market is now a much closer and more competitive field than it once was. These days, the HiLux is battling not only the Ranger, but also the aforementioned Navara and Triton, as well as the BT-50, Isuzu DMAX, Volkswagen’s Amarok and Colorado. Soon, it’ll have some “elite” company in the form of the Mercedes-Benz X Class, while an elite-priced (if not elite badged) competitor already exists in the form of the imported and converted jumbo pickups wearing the RAM badge.

The “unbreakable” mantra often quoted in the same breath as the HiLux model name has returned it to the top of the sales charts, but disappointingly, this latest generation version has not taken the big development step forward required to replicate its previous market supremacy.