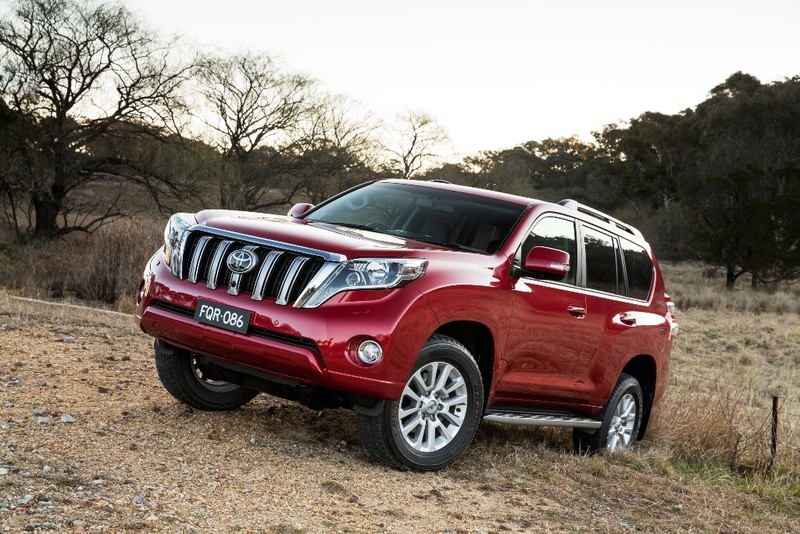 LandCruiser's Prado may be a premium-priced off-roader, but it's also the top-seller in its class and one of the most capable off-roaders going around. For 2016, there's a new engine, new styling and new driver-assistance features aimed at keeping that #1 slot.

Market dominator Toyota has plenty of top-selling weapons in its arsenal, but few have been more consistent than the Prado, which has led sales in the 'Large SUV' segment here for the past 13 years. Genuine 4WD ability puts it ahead of a growing number of road-centric SUVs, but civilised road manners, as well as the Toyota reputation for reliability, means it mixes it with - and beats - a broad range of competitors.

It's no exaggeration to say the Prado was starting to get a bit long in the tooth and nowhere more so than under the bonnet, where it had long laboured with a 3.0-litre turbo-diesel four-cylinder.

Sufficient torque availability across a decent rev range was a Prado shortcoming, but this has been remedied by the new 2.8-litre turbo-diesel 16-valve DOHC four-cylinder/six-speed auto combination now installed beneath the even more bulbous snout.

Now Euro5 compliant with a particulate filter, and smoother than the equivalent HiLux powerplant thanks to the addition of counter-balance shafts, the 2.8 throws 130kW and 450Nm of torque through the six-speed auto to good effect. That's up 40Nm over the old Prado (but down on the 143kW/470Nm Ford Everest), with a good spread from 1600 through to 2400rpm and a smarter automatic.

Toyota claims a six per cent better fuel economy with the new engine, down to 8.0 litres per 100km for the auto, which is just under the Ford's claim of 8.5. Also factor in here that, with its 150-litre tank, the Prado's range is much greater than that of the 80-litre Everest.

Real-world fuel numbers around 11 or 12 litres per 100km are more indicative, but still not bad for a vehicle of this size, shape and duty.

On the road, the new Prado punches a little harder than the previous version, feeling more eager more often. The front end and steering are also improved, but neither are as accurate as the Everest.

Getting through traffic snarls and school runs is easy duty for the Prado, which offers good passenger accommodation across all three rows and reasonably easy access to the seating, but less cargo space behind the third row than the Ford.

Obviously, that's not cheap, but there's no shortage of kit - the flagship Prado variant gets a Blu-Ray player and three cordless headphones to tame the rugrats (who also get their own climate controls), but it suffers the age-old TMC problem of obscuring the rear vision mirror's view aft, although that may be a small price to pay for peace on a long road trip.

The driver is well catered for, with touchscreen controls, a first-rate sound system with digital radio reception and active cruise control (which is a little abrupt in application) heading a fully-packed features list.

Also on the Kakadu is a reach 'n' rake power-adjustable wood-look and leather-wrapped steering wheel (not a personal favourite) with phone, audio and cruise controls.

A handy feature for the off-road enthusiast is the addition of a 220-volt rear accessory socket for keeping breakfast and bait chilled.

The driver also gets a colour information display between the dials and a "conversation" mirror that's more about seeing who started what fight in the back seats.

Numerous 12-volt and USB inputs are in the cabin, too, plus there's an "illuminated entry system" that puts motor show stand cars to shame for lighting.

It's away from the tar where the Prado really comes into its own: its constant four wheel drive offering plenty of traction on dirt, while the adaptive suspension works well enough. Even running the uninspiring Grandtrek OE rubber, the Prado doesn't shirk more challenging terrain - rutted rocky tracks, sandy sections and fast dirt on the Fleurieu Peninsula south of Adelaide were traversed with enthusiasm.

The Kakadu gets the kinetic dynamic suspension system with adaptive adjustable damping and adjustable rear air set-up; ride quality, noise insulation and refinement are all good, although the suspension adjustment could be broader in variation.

Once the really rough stuff is encountered, the Prado makes even more sense, using its electronic assistants sparingly to get over undulating and broken ground without concern. The electronic trickery on offer - Toyota calls it 'Multi-Terrain Select' (MTS) - tailors the drivetrain to varying conditions. There's also an off-road crawl control function (that automatically controls engine power and brake input to each wheel at low speed), plus hill ascent and descent control. The latter is - like the adaptive cruise control - unsubtle in application and prone to driveline shunting, meaning good throttle control from the driver is a better option.

That aside, the 2435kg Prado (90kg lighter than the Everest Titanium) crawls over rougher terrain with minimal fuss - the stats sheet claims 220mm of ground clearance, as well as an approach angle of 32 degrees, a 24-degree departure angle and a 22-degree ramp angle (all better than the Ford).

In our test, it handled rough duty very capably - as you'd expect - and it didn't belly out on anything substantial, either.

If wheel placement is the difference between returning home in the Prado or a rescue chopper, then the cameras front and rear, as well as in the mirrors on either side looking fore and aft, make picking the right path a doddle.

Locking the centre and rear differentials does more than enough to keep forward progress intact, teaming with the terrain-specific MTS system seamlessly.

While there are lots of new goodies on the new Prado, one thing that hasn't been upgraded is the towing ability, which remains at 750kg unbraked and 2500kg braked - down on most of its competitors.

A herd of LCV-based wagons have arrived to erode the Prado's domination in the large SUV segment and there are several among them with skillsets to challenge the leader's 13-year run at the top (although doubts linger about the "fiery" Ford). After my test in the MY16 Prado Kakadu, it's not hard to see why the ultimate LandCruiser still rules the 4WD roost. 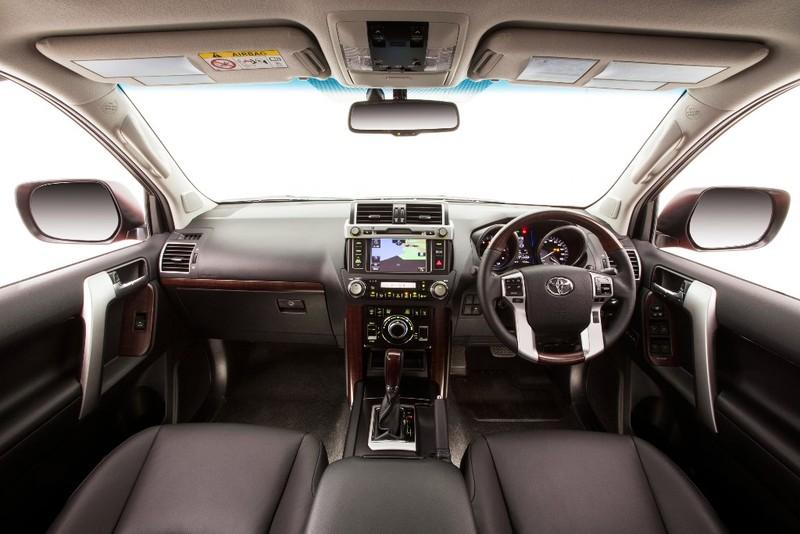 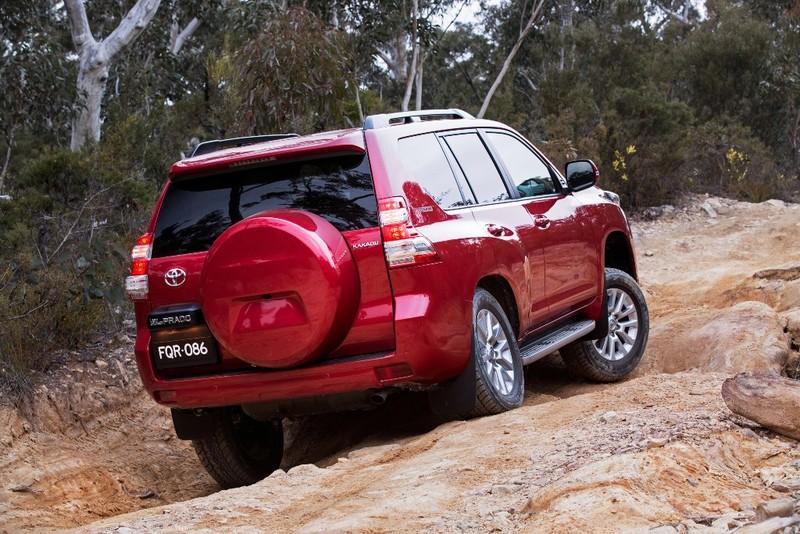 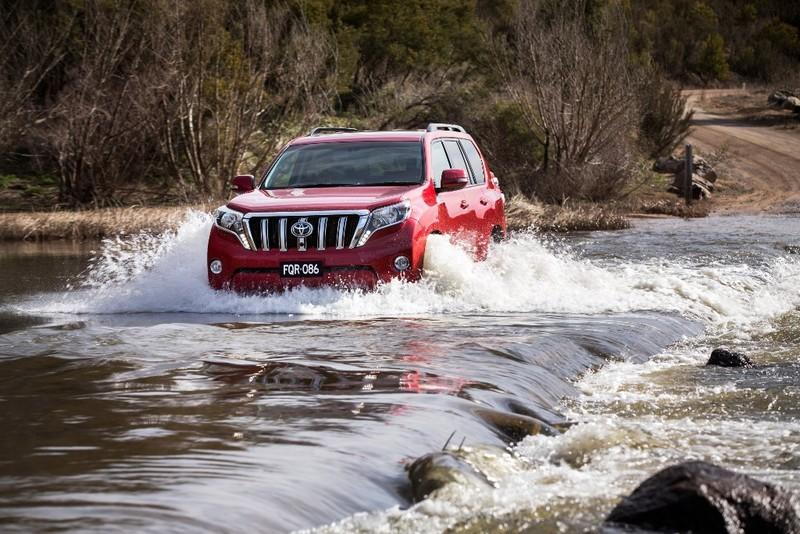