After years of being a solid, if unspectacular, member of the Mitsubishi SUV line-up, the turbo-diesel Challenger is no more - it's 'goodbye Challenger' and 'hello Pajero Sport'.

Note from the start, though, that the new Sport is no refreshed Challenger. It goes way beyond that, with totally new styling, a new engine, a new slick-shifting eight-speed automatic transmission and a raft of technological goodies, as well as comfort and refinement levels existing Challenger owners wouldn't believe.

And it's certainly not another "updated variant" in the traditional and aging Pajero line-up, either.

The new Sport comes in three spec levels - GLX, GLS and Exceed - all five-seaters and all of which use the new 133kW/430Nm 2.4-litre turbo-diesel four-cylinder that first saw the light of day in the latest Triton ute range (see a road test on the Triton Exceed in JUST 4x4s #313).

The other big drivetrain news is a brand-new eight-speed automatic transmission - a Mitsubishi first - that can be played with manually via the traditional stick shifter or steering-column mounted paddles.

With this package, Mitsubishi claims a combined fuel consumption figure of 8.0lt/100km and during the seriously varied test we undertook, we came in at 8.3 litres. Pretty impressive.

For our test, held at the national media launch for the Pajero Sport in New South Wales, the weapon of choice was the top-spec $52,750 Exceed. Mitsubishi used the spectacular Stockton Bite sand dunes near Newcastle and challenging bush tracks in the Watagan State Forest near Maitland to demonstrate the Sport's off-road capabilities.

After all the rough stuff, the final destination was Sydney airport, so it can't be argued that we didn't throw everything at the new Mitsubishi.

As soon as you lay eyes on the new Mitsubishi offering, you see that it's a very different car to the venerable Pajero from which its name is derived.

The front is dominated by the brand's co-called "dynamic shield" grille, with lashings of chrome and aggressive styling - a look we first saw on the latest Outlander.

From the rear, the Sport's combination lights look somewhat unusual with the two "tails" hanging down to bumper level rather than going up the C-pillar as they do on other SUVs, like Volvo's XC90.

The Sport's interior is a pretty classy affair with chrome-rimmed Audi-like (not the electronic ones) dials and a striking blend of piano-black plastic and metal-look trim highlights for the console, centre stack and door trims.

Throw in the Exceed spec's quality leather trim (that for the front seats has sunken stitching lines for more of a classy look), and the picture is completed.

As with most SUVs - especially truck-based ones like the Pajero Sport - utilitarian hard plastic is the order of the day for most of the trim, but the front doors have nice soft armrests and soft padding beside them on the door cards.

The superbly-shaped front seats feature plenty of hip-and-thigh bolstering: the sides of the seatbacks and cushions have been raised for increased support and the seat centres use multi-layer high-density cushioning for better support and fit. In all, they're probably class-leading.

Most ladder-framed, ute-based SUVs - and the utes from which they're derived - do not have height-and-reach-adjustment for the steering wheel. Not so the Pajero Sport. Its leather-clad multi-function steering wheel has this important feature and with plenty of electric adjustment for the seat, it's a breeze to dial up the perfect behind-the-wheel position.

The one interior design feature that did annoy me - especially during the rock 'n' rolling of the sand dunes and the off-road bits - was the sharp edge of the brushed-chrome-look trim on each side of the centre-console that my knees and legs kept hitting. It's a quite striking design feature, but for me, it wasn't user-friendly. Perhaps the Japanese interior designers and their legs were shorter than this 185cm reviewer and they didn't notice it. I certainly did.

As you'd expect from the top-of-the-range model in the Pajero Sport lineup, the Exceed's standard-kit inventory makes for impressive reading. Highlights include:-

While we're on the features, the Pajero Sport, like an increasing number of new cars, is not CD friendly and doesn't have its own navigation system. You have to navigate with smart-phone apps, but you can access these via the touchscreen or voice control.

With 673 litres of rear cargo volume (with rear seats up), the new Pajero Sport can swallow significantly more luggage than its Challenger predecessor. Fold the rear seats down and this opens up a capacious floor-to-roof 1624 litres of space.

Other storage cubby holes include a bin beneath the front centre armrest, a deep glove box, four good-sized door pockets, small bins on the side of the centre console, two cupholders for each of the two rows of seats (and two already in position in readiness for a seven-seat Sport variant) and a huge roof-mounted sunglasses holder.

Now to the more technical bits.

The Pajero Sport's 'Super Select II' 4WD system, controlled via a selector dial in the centre console, makes it simple for the driver to switch between four different drive modes and the centre differential.

With the tyres down to 14psi out on the Stockton dunes, we dialled up "sand" mode (surprise, surprise!) via the Sport's brand new and exclusive-to-this-model 'off-road-mode' terrain-selection system. In sand mode, with all that low-down torque, overcoming the challenges of the dunes was a breeze.

The other settings are "gravel," "mud/snow," and "rock," all of which we used to great effect on the off-road forestry section at the launch.

That off-road performance was impressive, but somewhat expected. What was a surprise was the increased level of refinement in the new Sport Exceed. Compared with its Challenger predecessor, the difference is nothing short of dramatic.

The Challenger's old "oiler" was rattly, rough and way more thirsty. That said, there's no doubt the now-pensioned off Challenger would have done everything on the sand and in the bush that the Pajero Sport did - it just wouldn't have done it with as much class.

My co-driver and I found that even on coarser bitumen or gravel, the lack of road noise intrusion was right up there with any SUV you can think of. At step off, you're aware of the turbo-diesel under the bonnet, but once you're up and running you'd never know.

Mitsubishi engineers put the new Pajero Sport through a rigorous Australian testing regime - along with the new Triton - that included all kinds of road and towing conditions. The objective was to tune both new babies for local conditions, such is the importance of this market.

The result is a new double-wishbone/coil-spring set up at the front and three-link rigid axle/coil-spring rear arrangement that has been well sorted thanks to that local testing.

Front-and-rear damper rates were tweaked to deliver a comfortable and compliant ride, while the steering's power assistance calibration delivers an easy-to-turn steering wheel when stationary or at low speeds. At higher speeds, more feedback comes into play.

The stabiliser bar has been beefed up and the result is a flatter ride and better, more precise handling through tight corners.

Safety-wise, the Pajero Sport has been awarded a five-star ANCAP rating, so that side of the story is well and truly bedded down.

So far as the Pajero Sport's competitors are concerned, the just-released $61,990 Toyota Fortuner Crusade seven-seater is likely to be the toughest adversary. On reputation of the brand alone, the Fortuner is likely to be a winner, but analysing the specs puts the Mitsubishi ahead in most areas.

With 130kW and 450Nm from the Toyota's 2.8-litre turbo diesel, compared with the Sport's 133kW/430Nm, there's not much in it grunt-wise. The Sport's eight-speed automatic has two more cogs than the Toyota, which works a treat in achieving that excellent fuel consumption figure of 8.0lt/100km against the Fortuner's 8.6lt/100km.

Isuzu's first foray into the SUV market - the MU-X in its $54,000 LS-T spec - has been performing well locally, but Isuzu dealers will certainly find things tougher with the arrival of both the Pajero Sport and the Fortuner.

Against the five-seat Pajero Sport, the seven-seat MU-X runs a 3.0-litre turbo-diesel: bigger in capacity, but its 130kW and 380Nm are no match, torque-wise, against the other two.

(Note all prices are Manufacturers' List Price and do not include on-road costs).

At the Finish Line

In summary, the new Pajero Sport - especially the top-spec Exceed - is one of the finest vehicles to ever wear the Mitsubishi badge. It carries out all its tasks exceptionally well.

If you're in the market for a great all-round family vehicle that combines features, comfort and an adventurous spirit - not to mention the actual ability to go with that - the new Mitsubishi Pajero Sport is a test-driving "must."

If you're a seven-seat family, rather than a five-seat one, Mitsubishi will cater for you, but you'll have wait a while. A seven-seater version is due to arrive next year. 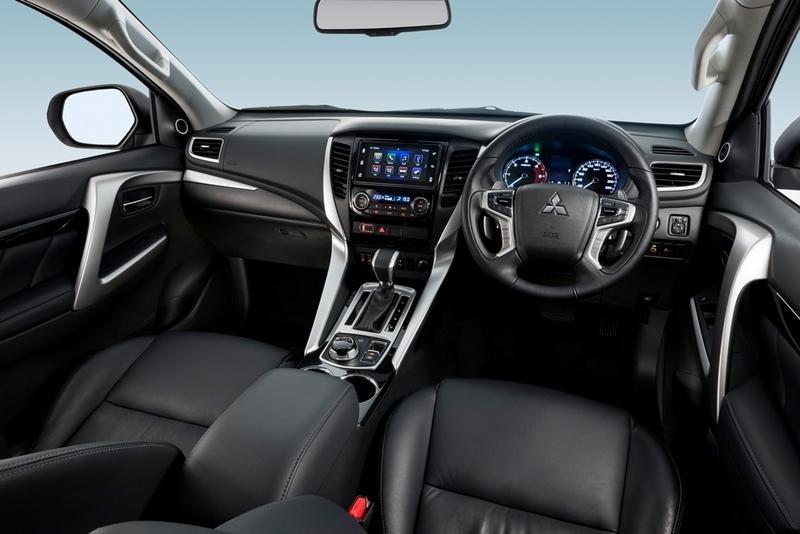 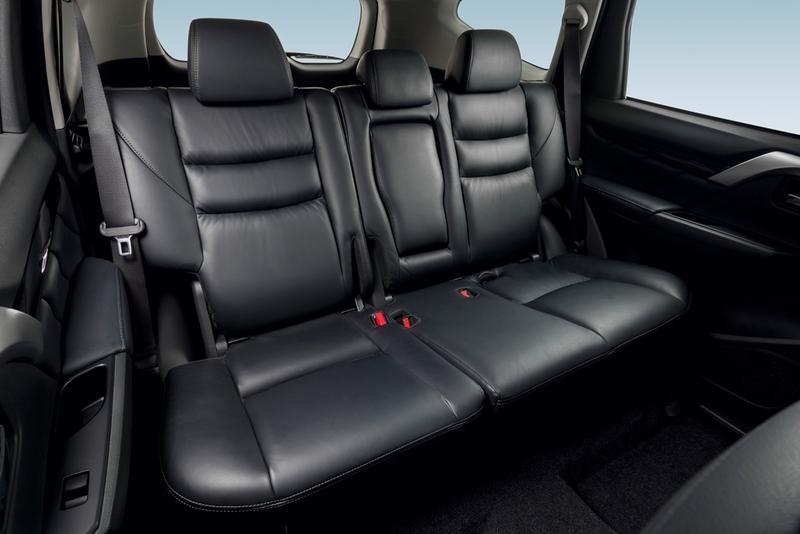 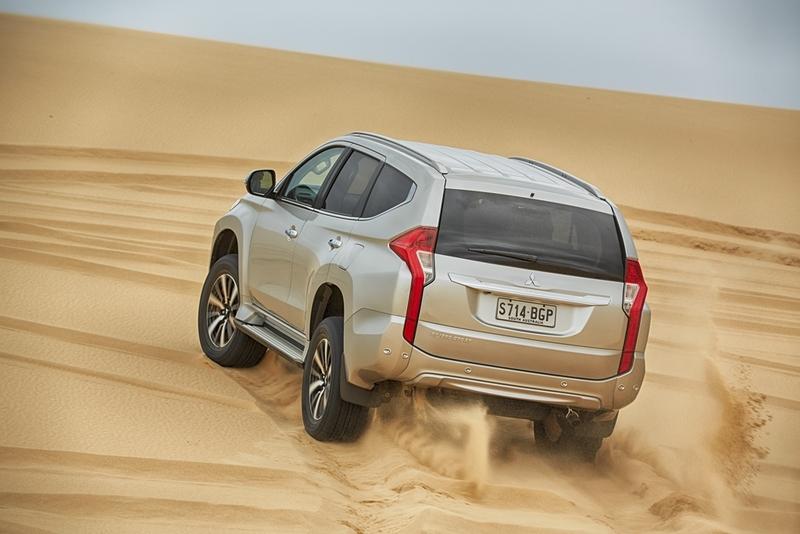 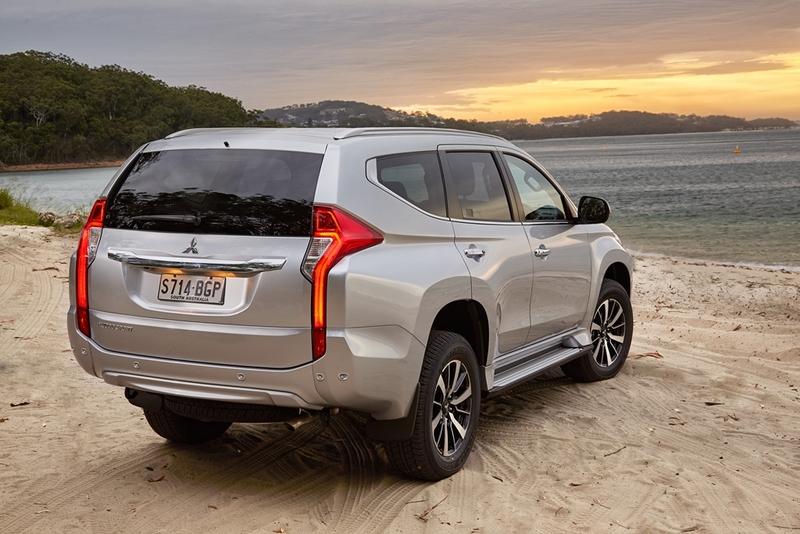 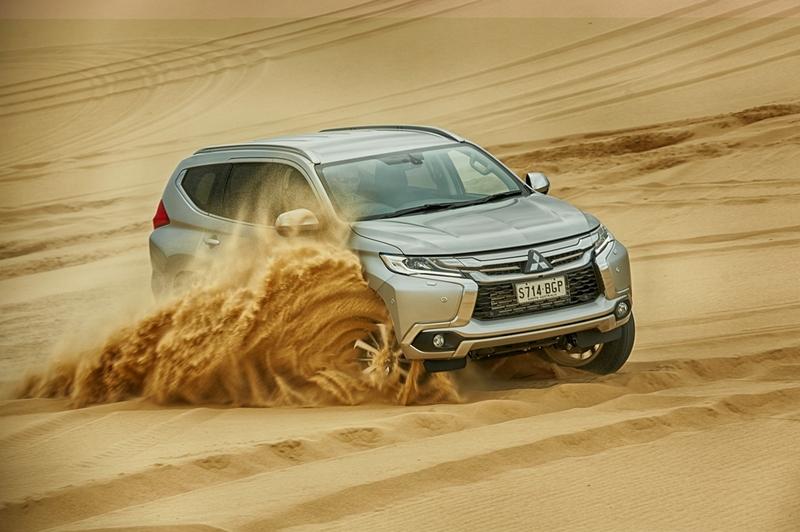