Haval is a China-based auto brand that’s the largest SUV manufacturer in its home country. How large? Try annual production of over 600,000 vehicles for starters, as well as the fact that Haval has been China’s No.1 SUV brand since 2002.

Here in Australia, Haval is much “younger”, only having arrived here in late 2015, debuting with a three-model range; all of which are generally agreed to be good vehicles. Last September, the imaginatively-named H2, H8 and H9 lineup was augmented by the arrival of the Range Rover Evoque/Toyota RAV4-esque H6.

The baby of the range is the H2, with a 110kW 1.5-litre four-cylinder turbocharged petrol engine. The new H6 ups that to a 2.0-litre turbo petrol four with 145kW and 315Nm, while the H8 goes a bit further with 160kW/324Nm. The same 2.0-litre – with the same outputs as the H8 - is also fitted to the range-topping H9.  Currently there’s no diesel available, but Haval say they’re in the process of developing an oiler.

A 2.0-litre four may seem meagre for an SUV displacing 2250kgs of kerb weight, but Haval say their state-of-the-art turbo technology delivers the performance of a much larger naturally-aspirated engine. I beg to differ, but more on that later. . .

In the week I had the top-of-the-range H9 Lux parked in my garage, I understandably faced a fair few queries – mainly ‘What is it?’ and ‘Is it any good?’ 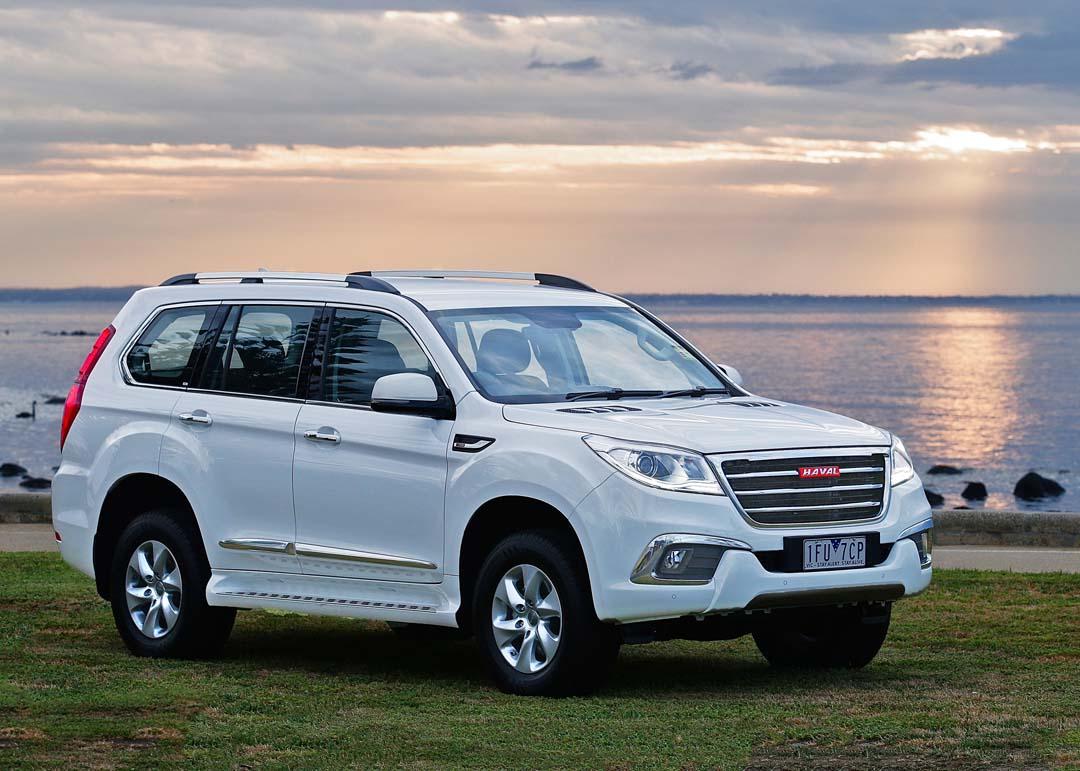 First thing to note about the H9 is that it’s a big car; think Nissan X-Trail meets Toyota Prado or Mercedes GL for looks and size.

Secondly, Haval have loaded their premium seven-seater with more fruit than a grocer’s store, regardless of whether you pick the ‘Premium’ or ‘Lux’ trim level. In the Lux that I tested, you get tri-zone climate control air conditioning, exterior night ‘logo’ puddle lamps, light-up door sills, leather-appointed seats (with heating on the first two rows and massage function on the front seats), power folding third row seats, satnav via an eight inch touchscreen, sunroof with presets and LED surround, mood lighting (operated via touch tab at the sunroof operation area), swivelling and levelling headlights, 10-speaker Infinity sound system, an All-Terrain Control 4WD system, plus dash-mounted 4WD info such as inclination, compass and even external air pressure. Not sure about that last feature, but it’s there, regardless.

Cloud to the silver lining? A surprisingly lacklustre performance from that turbocharged petrol engine, even given the 324Nm available between 2000 and 4000rpm.

As applied to the H9, there are gains in terms of power and torque compared to the same powerplant used in the H6, but this is largely negated by the 466 extra kilos the H9 has to lug around.

On fuel economy, Haval quotes 12.1 litres per 100 kilometres for the combined cycle, meaning urban consumption (not quoted) has to be something over 14.0lt. That's from an eighty litre tank and requiring a minimum of 95 RON. Kerb weight is listed at 2250 kilograms and towing capacity at 2500 kilograms. 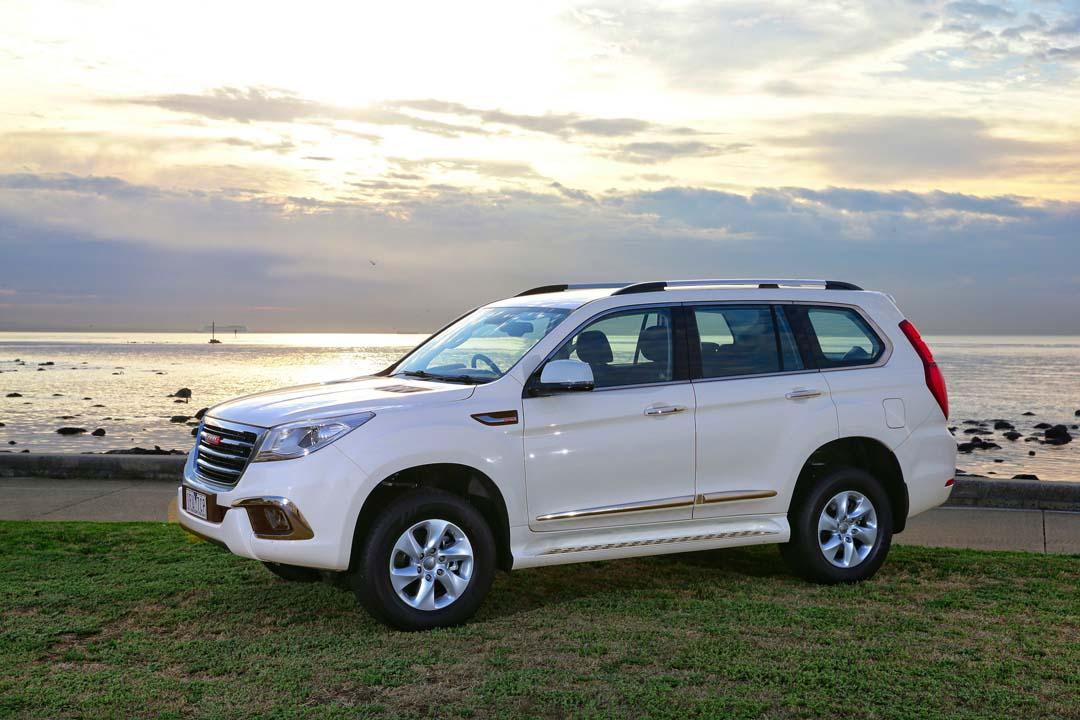 The sole transmission available for the H9 is a six speed automatic that has Auto, Sports and Off Road drive modes. In Sports mode, the lack of torque sees second gear held for too long under most normal accelerative conditions. Have to say, though, it is a smooth ‘box and engine combo, with most changes audible in revs, but not physically felt.

Early in my time with the H9, I experienced a quality control niggle, with the steering rack feeling like a mounting bracket or joint was loose. There was a noise and a feeling of untoward movement underneath. Later investigation revealed a knuckle needing replacement: a minor problem, but still worrying. Haval Australia assured me that it would not be an issue.

When not shifting about, the steering was responsive, with good weight and enough feedback to keep a modestly-capable driver informed about where they’re going. It does feel, though, like the rack and pinion steering requires too much lock-to-lock steering response, needing close to four turns.

With that comes a turning circle of just over eleven metres – not bad for a car that measures 4856mm in length and has a 2800mm wheelbase. 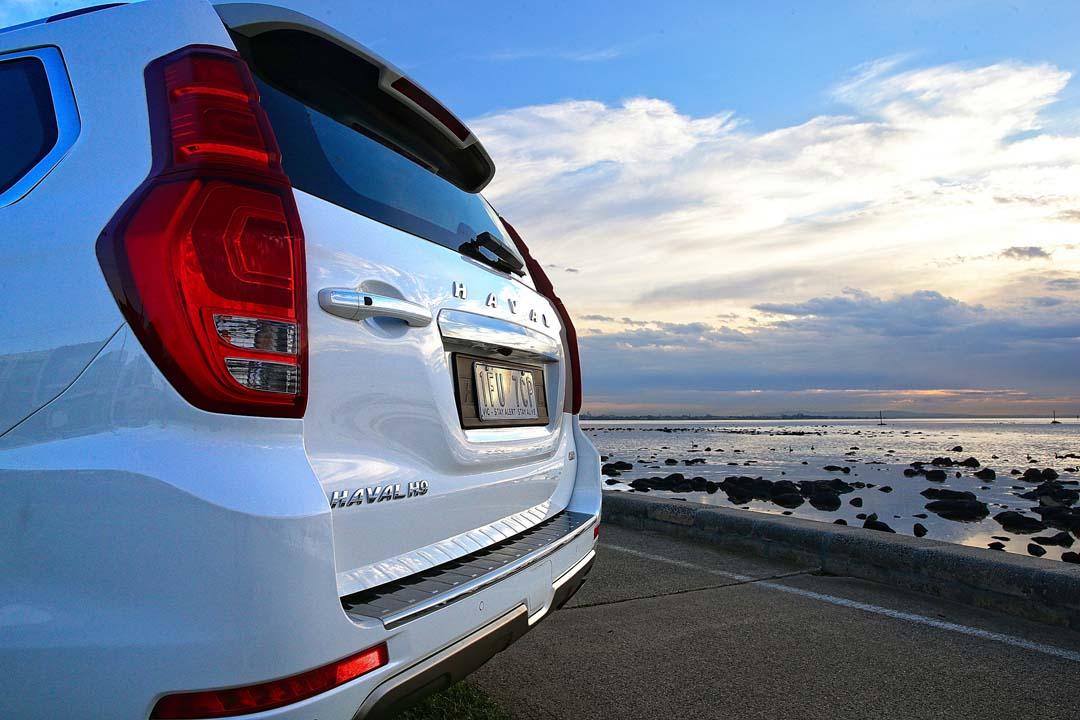 Apart from the annoyingly leisurely acceleration, the H9’s on-road performance was acceptable and would be good enough to please most people. Steering fault aside, I found the big SUV to be a competent handler, too, with a decent ride delivered by the double wishbone front/multilink rear suspension.

Over unsettled surfaces, the H9 did skip around more than I would have anticipated, with bump steer moving the steering wheel around in your hands.

On the flat, the H9 is more surefooted and compliant, if a touch taut, and dealt with Sydney's freeway undulations competently.

The H9 Lux rolls on big Cooper Discoverer asymmetric tyres, at 265/65/17 and 265/60/18, which provided a wealth of tarmac-based grip and combined with the suspension to ensure that, for the most part, an on-road ride quality to suit all but the fussiest or sporting-oriented drivers. 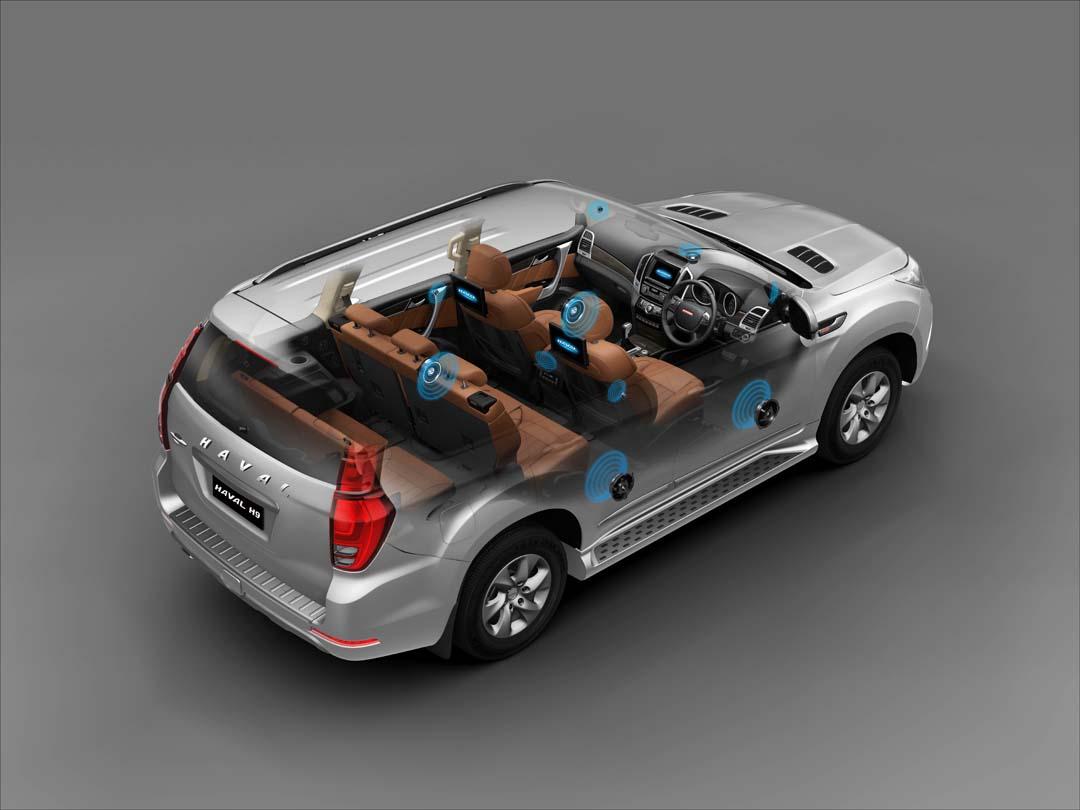 Beauty, they say, is in the eye of the beholder, but for me, the H9 is a handsome car. In profile, the wheelarches are solidly-defined and there’s a sense of musculature in the curves. There’s a lot of “Prado” about the overall look and dimensions, giving a fair indication of who Haval are pitching the H9 against. The rear has an X-Trail kink to the rear window line ahead of Kia style “neon” tail lights.

The tail gate is a side opener, but at least it’s hinged on the right, unlike some other overseas-built SUVs that fail to take into account Australian requirements.

I encountered a quibble here in a tail gate that wouldn’t unlock. It could be just a case of a setting needing a tick or a cross, but it was frustrating knowing the passenger doors would open, but the interior door lock button needed a tap or you needed the keyfob to have the tail gate handle respond.

Up front, there are touches of Hyundai and Toyota in the styling, plus LED driving lights and a pair of non-functional bonnet vents that are definitely modelled on a certain German brand's look. 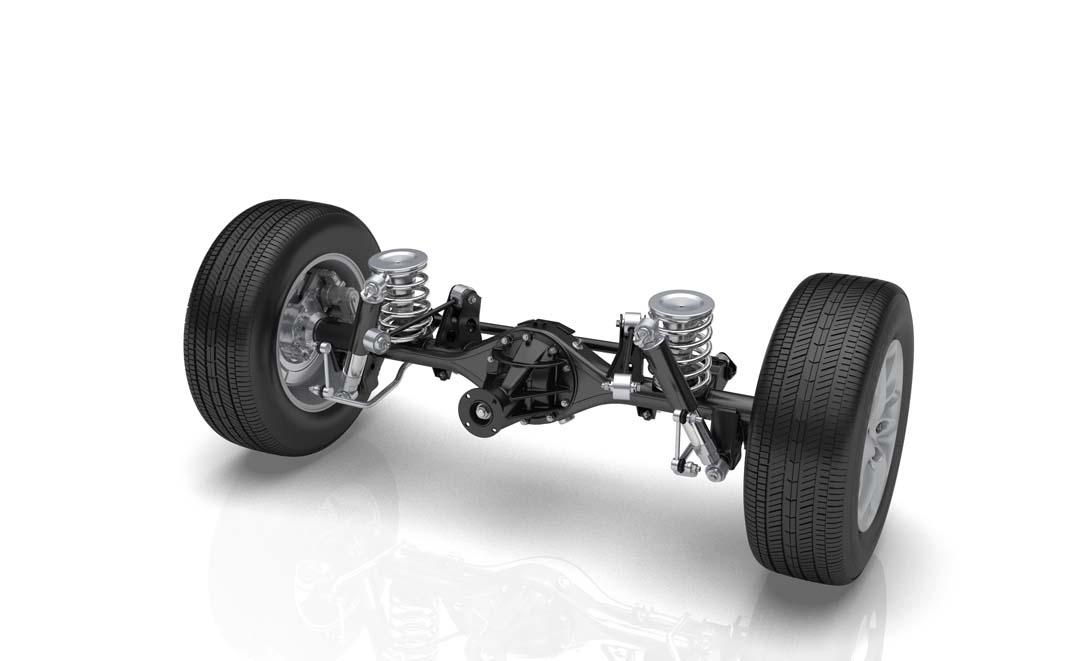 Inside Space and Safety

Following the tail gate issue, there was another electronic niggle with the air con. Sporadically, the H9 would take it upon itself to go to ‘auto climate control and window defrost’ mode, with the fan speed at Mach 2 – not the sort of problem you’d expect to encounter in what’s billed as a premium SUV.

That aside, the Lux presents itself smartly inside, with a well-appointed interior that features grey faux wood panelling and seats in black leather (Premium grade gets cloth seats). The dash has a good look and feel, with strong ergonomic engineering, too, like locating the Start/Stop button down on the centre console near the gear selector, and the simple - if somewhat hard to read - layout for the climate control system.

The driver's seat has a memory function, while both front seats have a cushion section that can be pulled forward for extra under-thigh support. The second-row seats are fold-and-slide, have their own heating controls mounted on the centre console and give up a VERY handy 1457 litres of cargo space when folded up. The third row seats are power folding, but need a finger held on the buttons (inside left in the cargo area) to operate and are verrrrrrrrrrrry slow. With the third-row seats in place, there’s 112 litres of cargo space, expanding to 747 litres when folded. 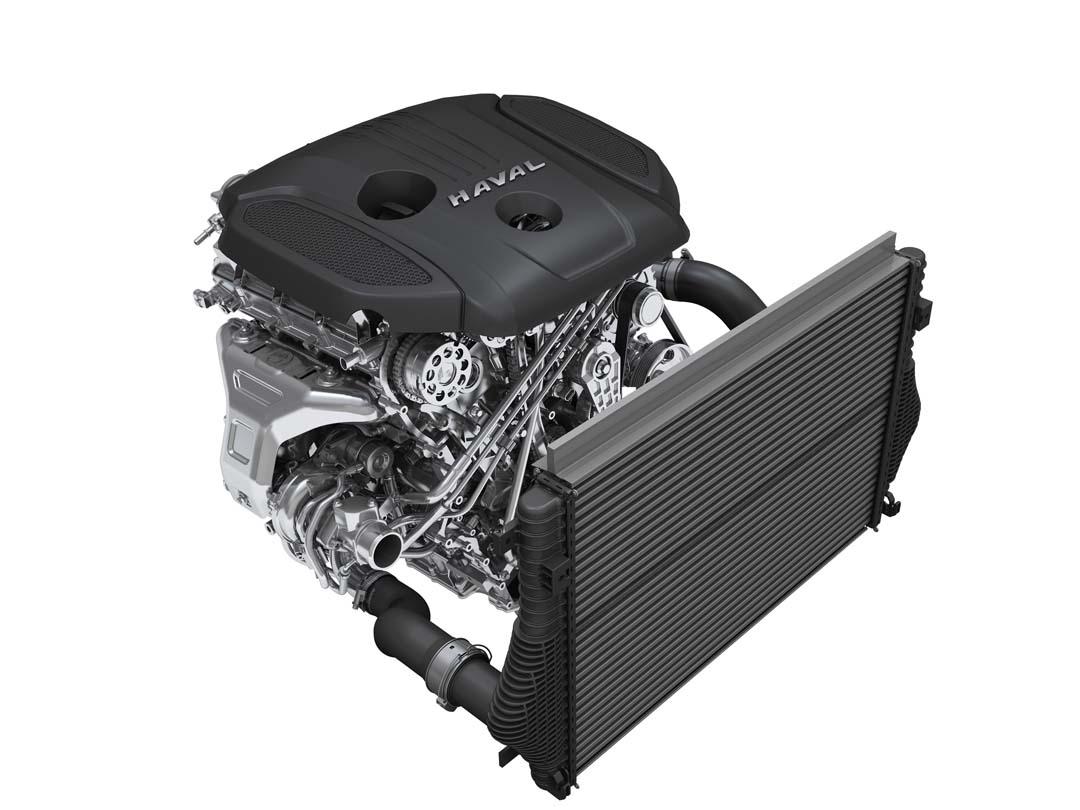 The family-friendly thought process behind the H9’s interior continues with a 150W/220V power socket, 12V socket, 2 x ISOFIX mounts, a pretty good hifi system (with a subwoofer in the cargo area) and Bluetooth connectivity plus an SD card slot. You can also option a DVD player for the rear seat passengers.

NVH levels are something Haval boast about with the H9. It’s a fairly serene cabin, but not whisper quiet and sometimes, when things are going wrong – like the aforementioned steering issue – more sound can be better, so you can at least hear where there might be a problem. 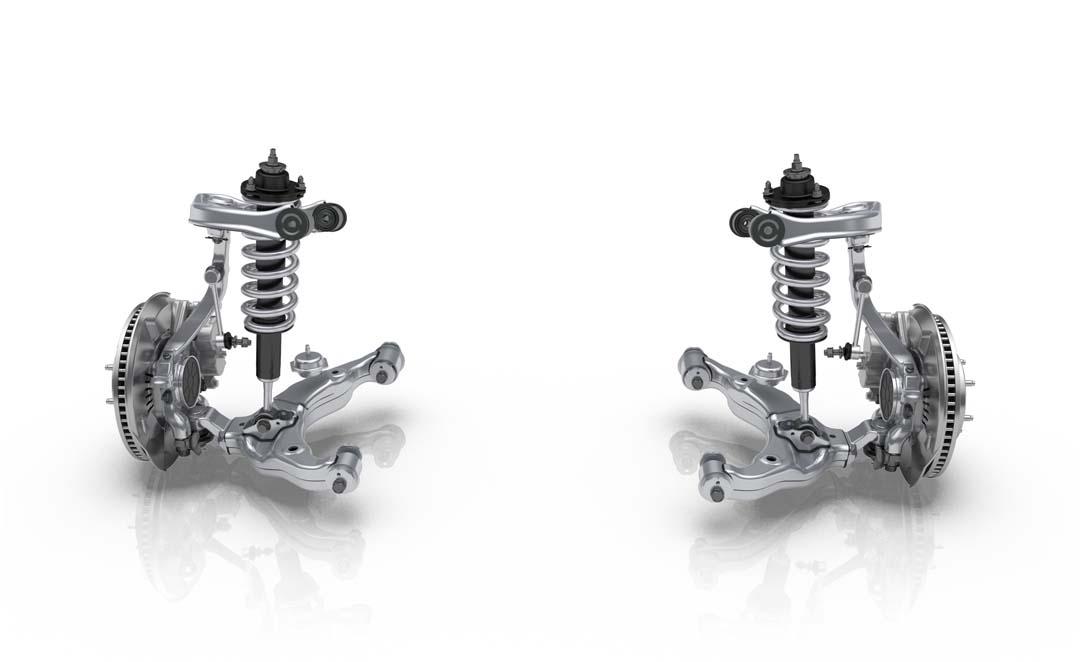 The centre console houses the dial for the off road modes, which in the H9 Lux is presented in a so-called ‘All-Terrain Control System’. Over the H9 Premium’s 4WD set-up that includes 2H, 4H, 4L and Auto, the All-Terrain system in the Lux adds dedicated Sport, Sand, Mud and Snow settings. Auto is the most versatile and “hands free” setting, using onboard sensors to continually adapt the driveline to suit the terrain. Choose the other modes and both the torque distribution and ESC calibrations are altered.

Is it up there with the 4WD systems from some of the best European or even Japanese brands? Probably not, but anyone with doubts about the H9’s off-road prowess needs to check out the test videos on the haval.com.au website. They show the Haval tackling the sort of terrain that’d see most of its opposition give up. 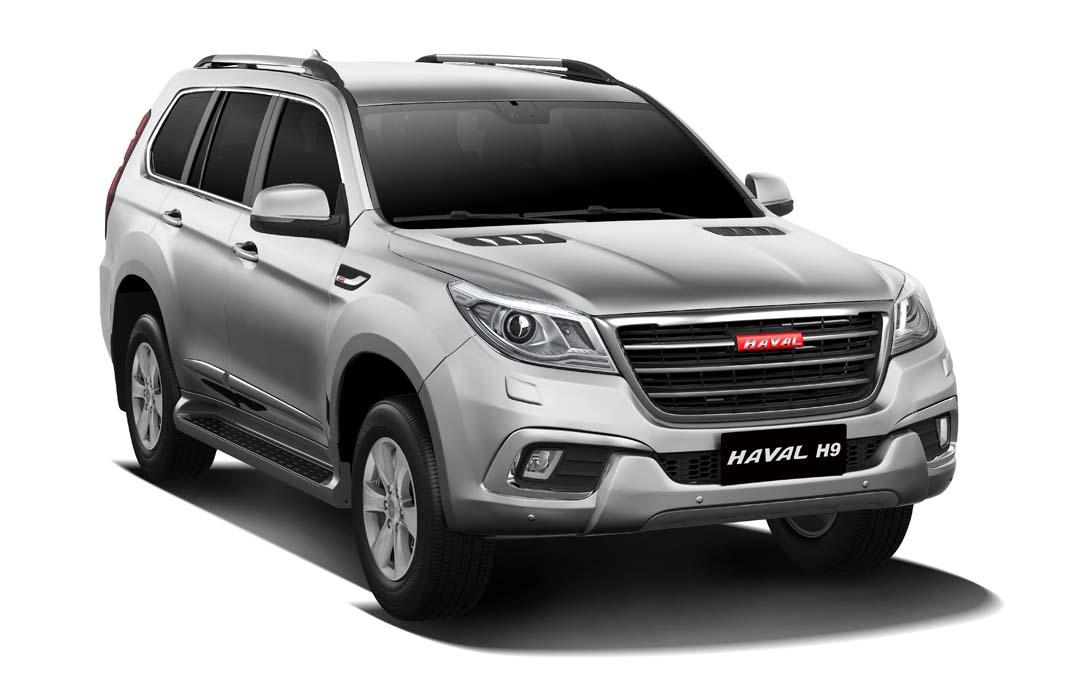 Taken to a road that is almost the ideal off-road tester - a mix of gravel, rocks, washaways, puddles and some pretty steep slopes - the H9 was a touch skittish, but didn’t shy away from the track. Some gentle coaxing on one of the steeper downhill runs (which becomes an exercise in uphill for the return journey) had the computers working hard and without any sense of a loss of control. It’s more than good enough for the casual off roader.

Also boosting the H9’s off-road cred is a full-size spare wheel (an increasing rarity nowadays) that’s underfloor-mounted, but can be accessed without having to remove luggage. 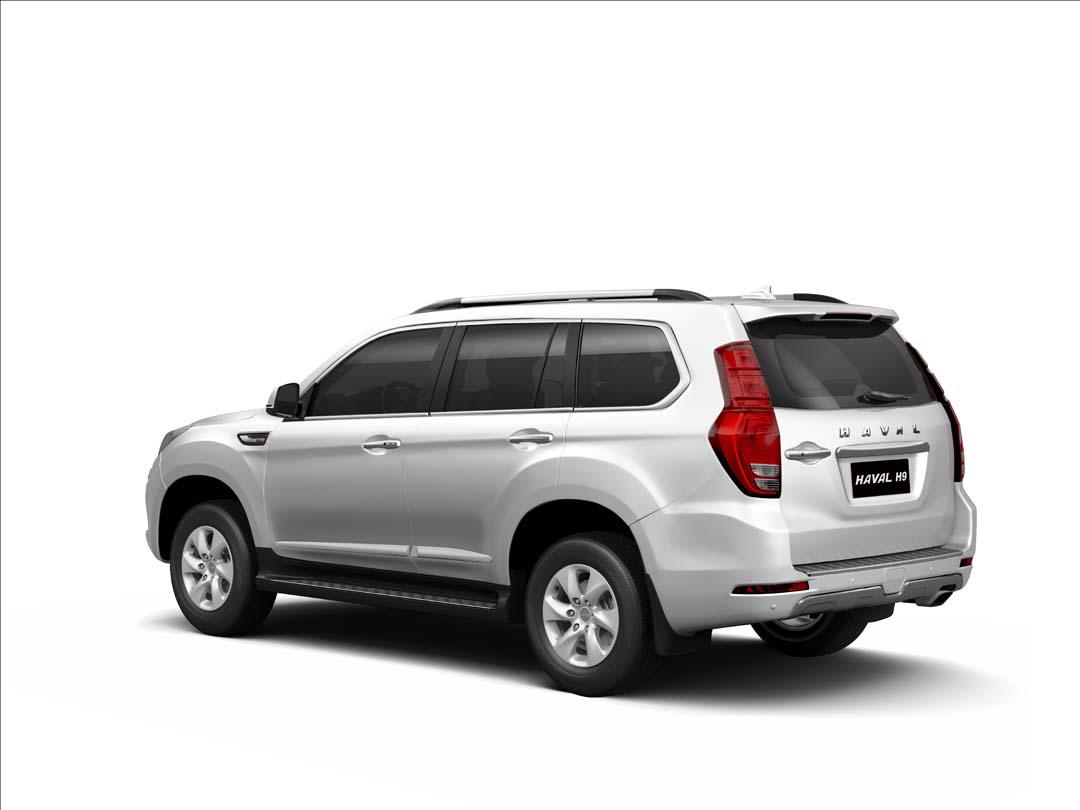 At The End
At $50,990 plus on roads, Haval pitches the H9 Lux (and its $46,490 Premium companion) into a hotly contested market. Despite the labels that may suggest it’s up against the Europeans, the H9’s real competitors are actually the aforementioned Prado, as well as the likes of Toyota’s Kluger and Fortuner, Ford’s Everest, the Isuzu MU-X and the Hyundai Santa Fe.

It’s cheaper and acquits itself well against this group, but lacks grunt and also misses some safety and in-car tech equipment taken for granted nowadays, not just in this style of vehicle, but in sedans and hatches lower down the automotive family tree, too.

The mechanical and electronic gremlins were a concern, but let’s hope my experience was an isolated one. To their credit, Haval were on the front foot in their response and show no small amount of faith in their product by offering a five-year warranty.

To sum up, the H9 is a pleasing enough handler, it performs well off road, is voluminous inside and well-trimmed. But if it’s aiming to unseat the segment-leaders and be our top-seller, it needs a diesel – and soon. 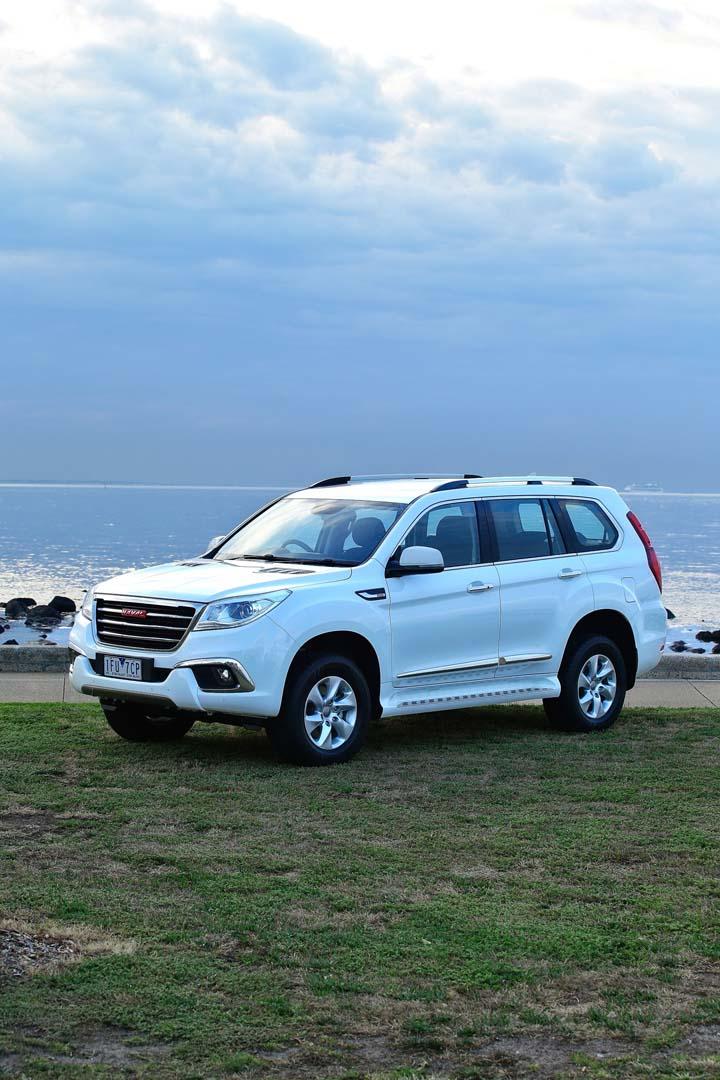