Peugeot makes likeable cars. That is a true fact and I won’t hear a word against them. The trouble is, they can be as likeable as you want, but up until recently, some of them were a bit quirky. I don’t mean deliberate, wilful quirk like a Citroen Cactus (quirkiness is, indeed, the point) but I mean the oddball first-generation 2008.

That car should have returned the French marque to the glory days of the 306, a French hatch that somehow did really well in Australia. It was great to look and drive and took it up to, well everyone. The 2008 didn’t manage that because even though Peugeot called it a compact SUV, it looked like an overgrown hatchback, a bit like the first Impreza hatch. It had a cool interior but it was clearly designed on a budget. Australian buyers shrugged it off as too weird and too expensive.

The second-generation 2008 is totally different to look at and has obviously been the result of a big development budget. Riding high (see what I did there?) on the success of the 3008’s design, the new 2008 is more obviously a compact SUV, far more arrestingly designed and is full of the kinds of things you expect to find in a compact SUV.

Here’s my first back-pedal. I still think it’s too expensive. The base model Allure kicks off at a hefty $34,990 – the base model – which is mid-spec for most of its obvious competition. As with the 5008, Peugeot says its a premium brand here in Australia. The question is, does that mean people are willing to pay more or does it actually have stuff in it?

I think the answer is the latter. Well, mostly. You get 17-inch alloys, climate control, reversing camera, keyless entry and start, cruise control, digital dashboard (fancy!), auto LED headlights, fake leather trim along with cloth (nothing wrong with that), power windows an mirrors, a lot of safety gear and a space-saver spare.

The level gear and price sort of lines up with Renault’s new Captur Intens, which I think is reasonable value. So Peugeot is taking a risk on not having a povvo pack to bait and switch buyers. Will it work? Time will tell. 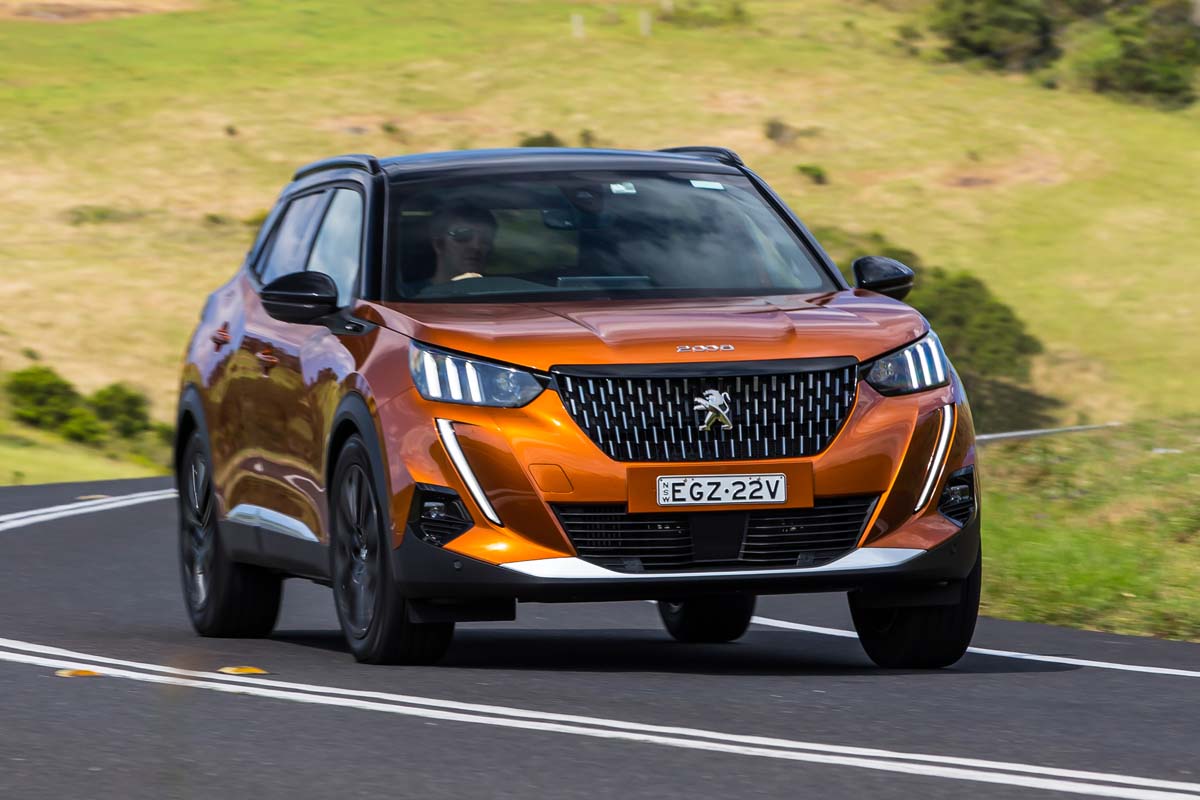 If you buy a certain Korean turbo competitor, you have to go back to the dealer every 10,000km you will pay another $20 per service on average. If you do more than 10,000km, your yearly average will climb. On the other hand, the new Renault Captur will go up 30,000km between services but will cost a fair bit more per year over five years. 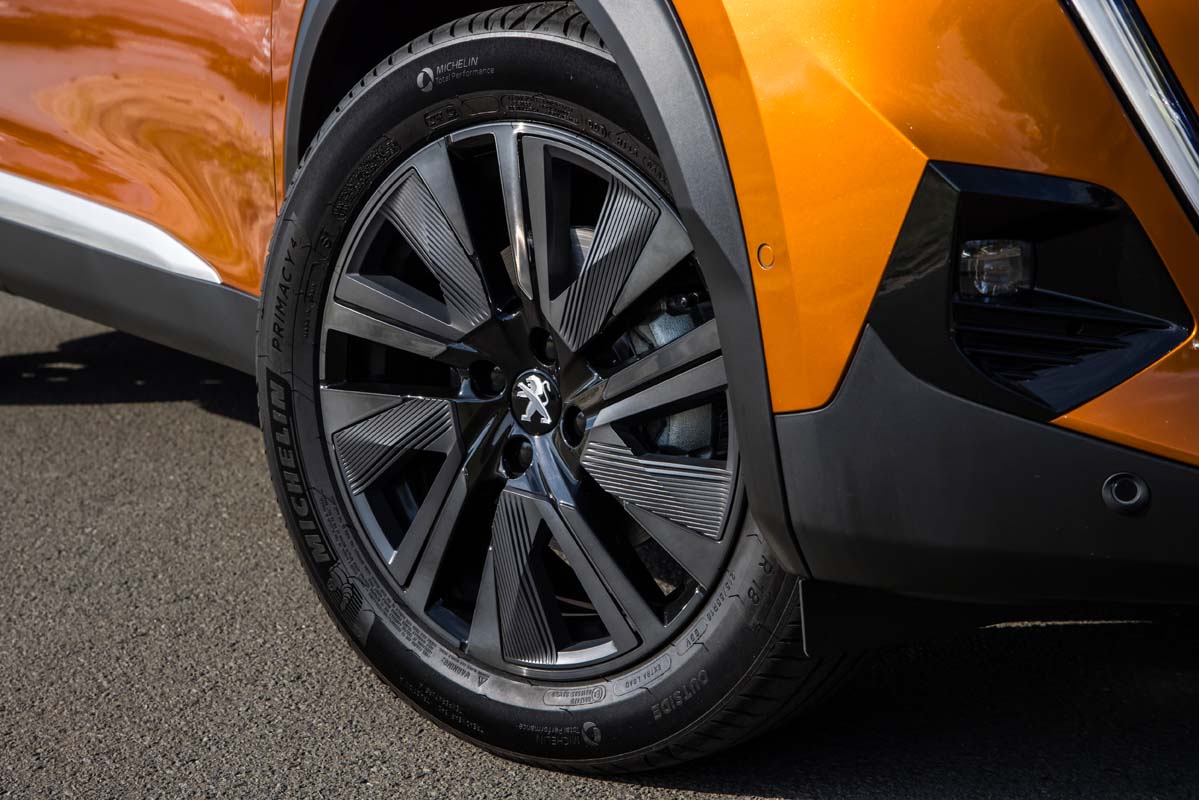 The previous car appeared before the design revolution that was the 3008/5008 pairing and the current beauty that is the 508. The 2008 has the fangs from the 508 that are now also on the 3008 and 5008 and it’s a much more interesting and cohesive design.

It’s a bit more macho than before, one assumes to attract younger buyers and probably a few more blokes than before. I love the origami look of the surfacing and even the Allure looks…uh…alluring which is good given Peugeot is banking on the styling getting folks through the door. 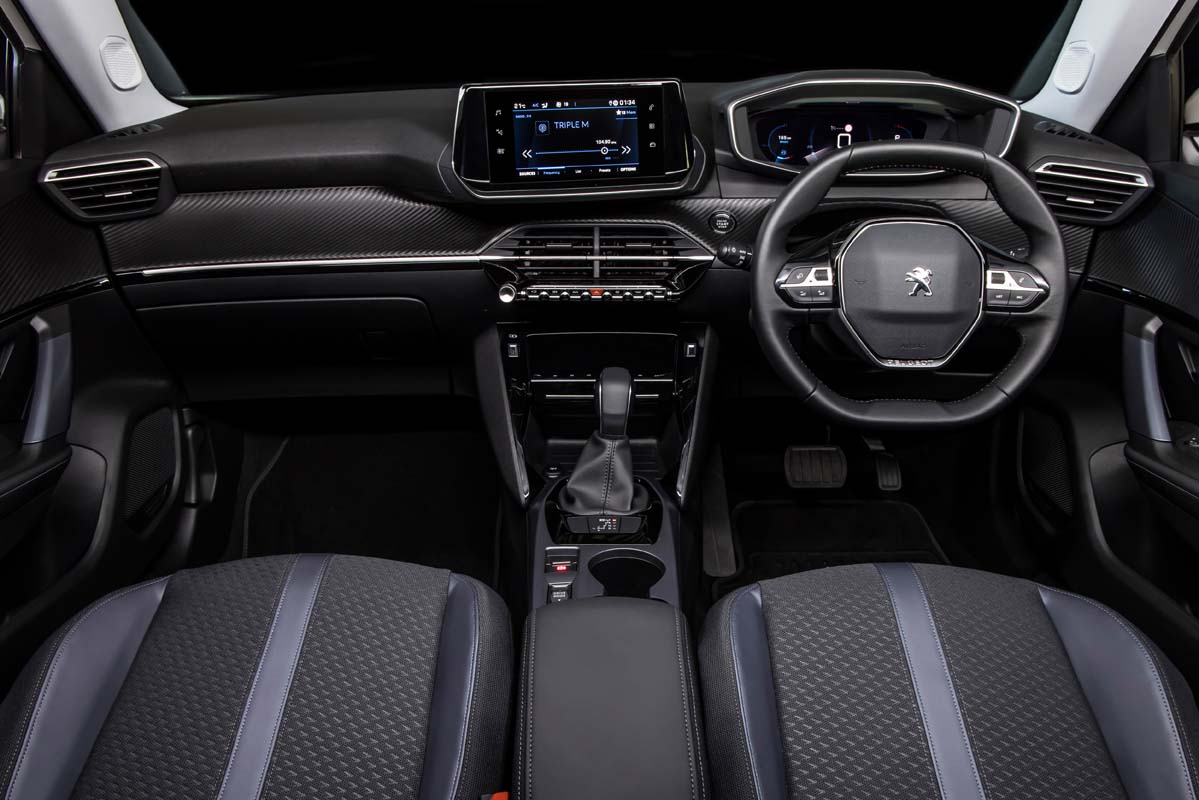 The interior is a giant leap ahead. Peugeot’s i-Cockpit works really well in SUVs and the new version of Peugeot’s digital dash is really cool. The interior design itself is another brilliant mix of shapes and materials that help justify the money you’re spending on this thing. It’s better than most interiors in the segment and like the bigger SUVs, makes you glad to spend time there. 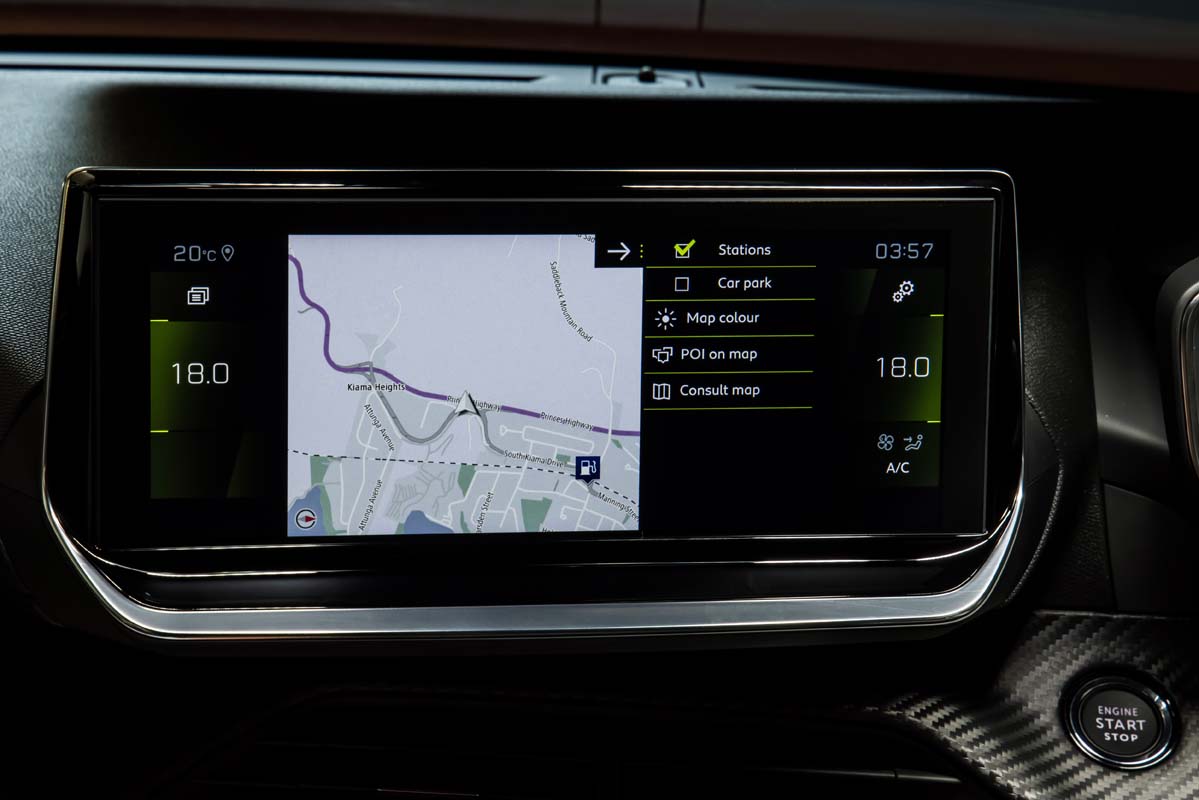 Peugeot bolts in six speakers powered by a 7.0-inch touchscreen (the GT Sport has the bigger 10-inch unit). You get DAB as well and Apple CarPlay and Android Auto along with four USB ports scattered across the car.

I found the system better to use than the 3008’s, being a bit fast and easier to navigate. I didn’t get a whole lot of time to think in this car because the rain – oh, the rain – was absolutely bucketing down so faffing with interior bits and bobs was not going to end well. 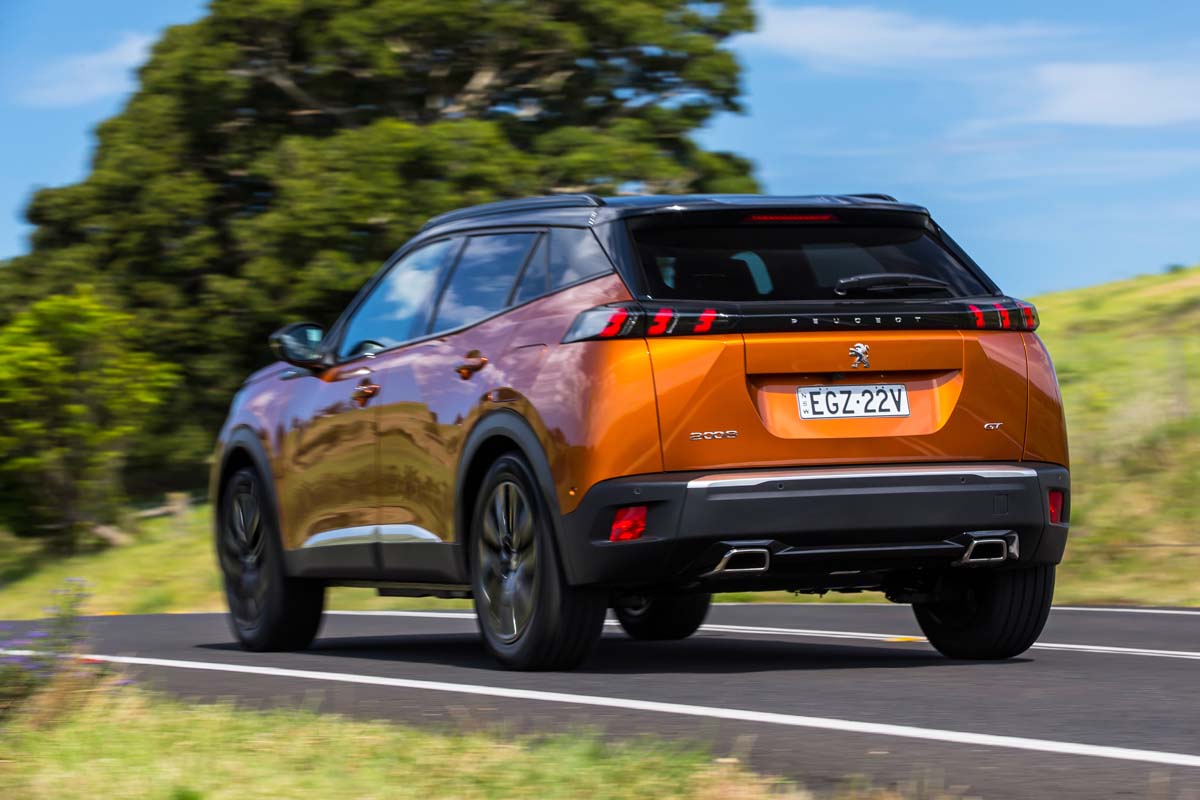 The boot starts at a very handy 434 litres, which is huge for the class, even when compared to the fabled boot size of the HR-V or the otherwise deeply ordinary (but hotcake-like selling) ASX. Drop the 60/40 split seats and you have a fairly impressive 1467 litres of space to play with.

Like a number of its competitors, the boot floor is a falsie, so you can either remove it for more space or sling valuables/muddy stuff underneath to keep them separate.

You do get sensibly placed and useful cupholders up front (the French are still learning) but none in the back. Not even an armrest. Why does this happen in 2021? The door pockets aren’t specifically bottle-holder shaped but can be used as such and the glove box and centre console bin are both quite small. There is a great spot for you phone, though, which certainly lowers the blood pressure. 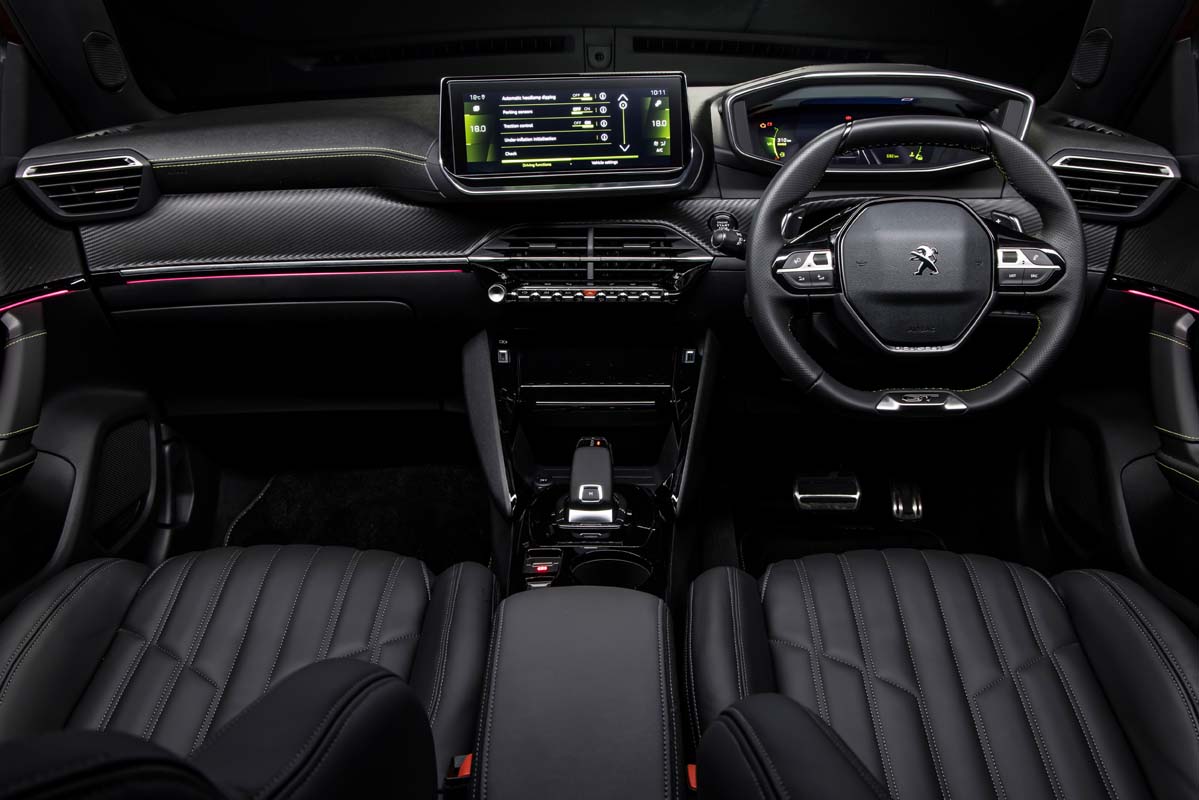 The Allure makes dow with the Puretech 130 version of the excellent 1.2-litre three-cylinder Peugeot throws in its small cars. It has 96kW and 230Nm, both of which are par for the course for some naturally-aspirated competition. Well, the torque is higher and that’s what will matter.

Power reaches the front wheels through an Aisin six-speed automatic and given the Allure weighs just 1287kg, you’ll reach 100km/h in just under ten seconds. Not a fireball, no, but it’ll do. If you want to spend a significantly higher amount of money, you can knock a second off that time in the eight-speed auto 114kW GT Sport. 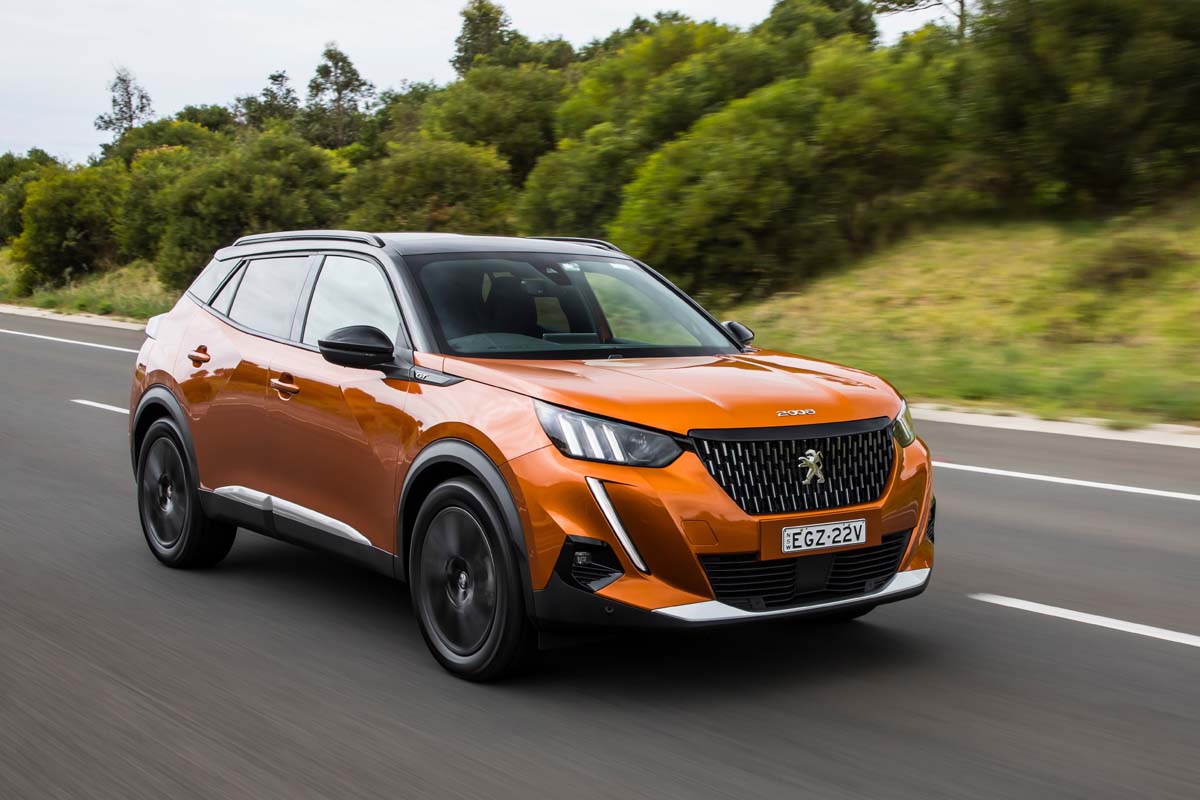 Peugeot says the Allure completed its government-mandated testing with a 6.5L/100km combined cycle figure while huffing out 148g/km of carbon dioxide.

If you don’t like either of those figures, there is an EV version that Peugeot Australia is looking at. Better start saving, though.

I didn’t even get a look at the dial on the car I drove, but previous experience suggests that the combined cycle figure isn’t far off reality. 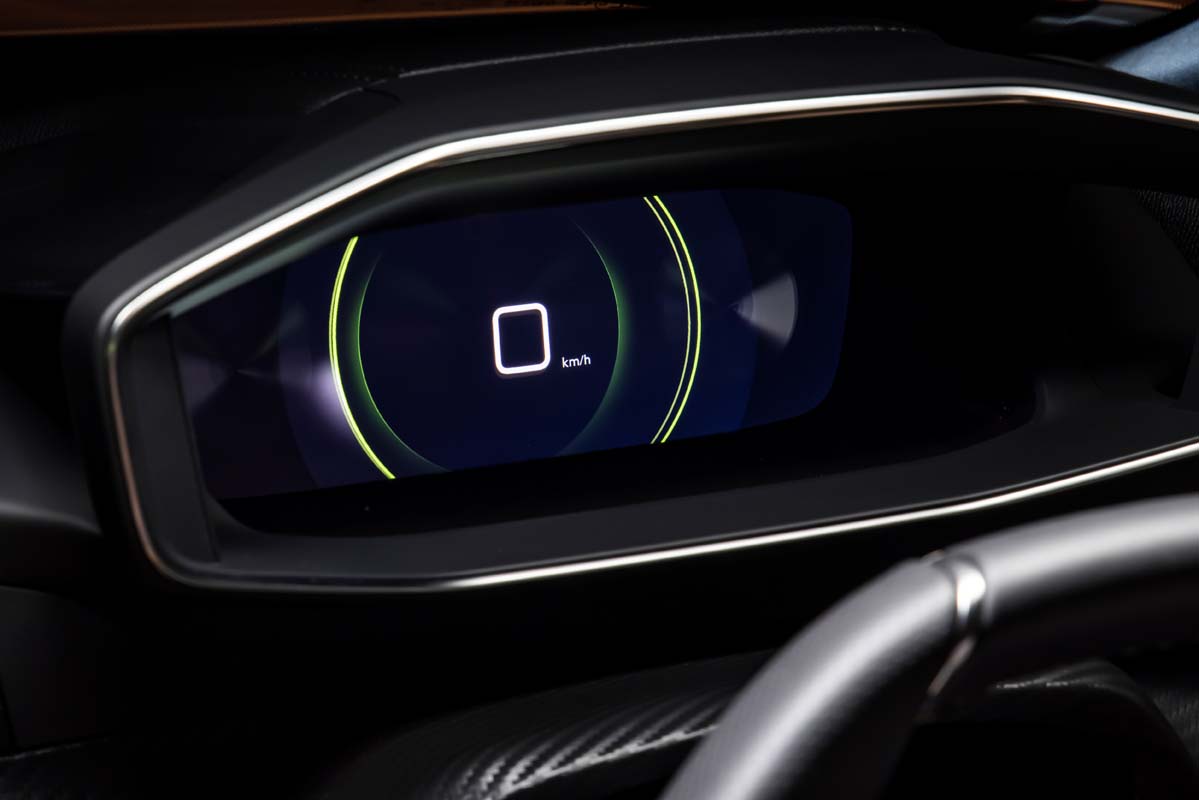 Peugeot hasn’t had much luck with launches in the last twelve months. The car’s original launch in October 2020 was blighted by heavy rain and low temperatures and this SUV drive day (where I also drove the 5008) was blighted by absolutely appalling weather.

Still, that’s a handy thing to have if you’re interested in finding out how a car manages tragic conditions. Like the 5008, the 2008 was excellent in the wet. While the power was never going to make the front end misbehave, its suspension set up is thoroughly brilliant. 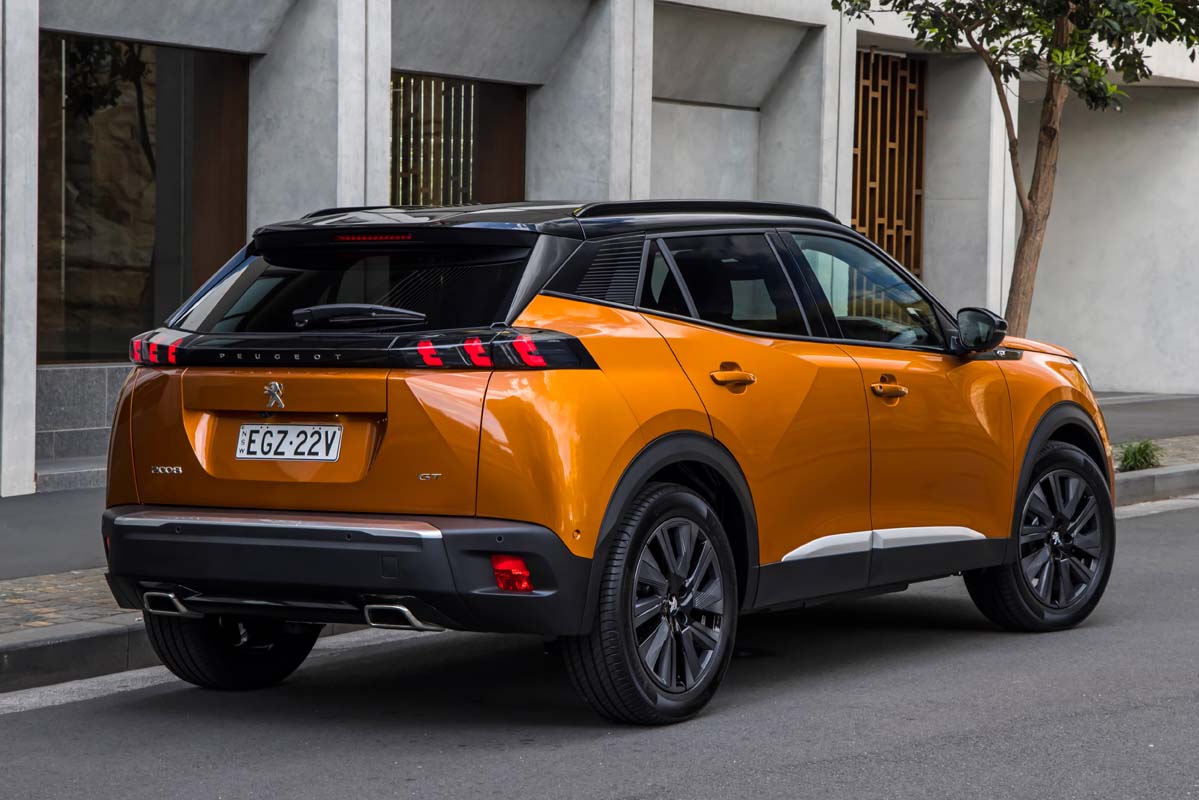 Given the weather, there was standing water everywhere hiding giant potholes which – again – the 2008 managed superbly. The ones I could see were an easy swerve with light, direct steering. Despite the overall stress of dealing with a pretty tough day behind the wheel, the 2008 was very easygoing in these conditions, which points to a grippy drive in the dry. Hopefully that happens sooner rather than later.

Its easygoing nature is to do with it being really quiet and composed. I like that very much but it also has a really nicely sorted chassis with a typical Peugeot balance of ride and handling.

Even with the modest power figures, the 2008 moves along quite nicely once up to speed. Once you’re past the mild lag of the turbo, you’re off and you won’t look back. It won’t be much fun four-up with luggage, but few cars are in this class. 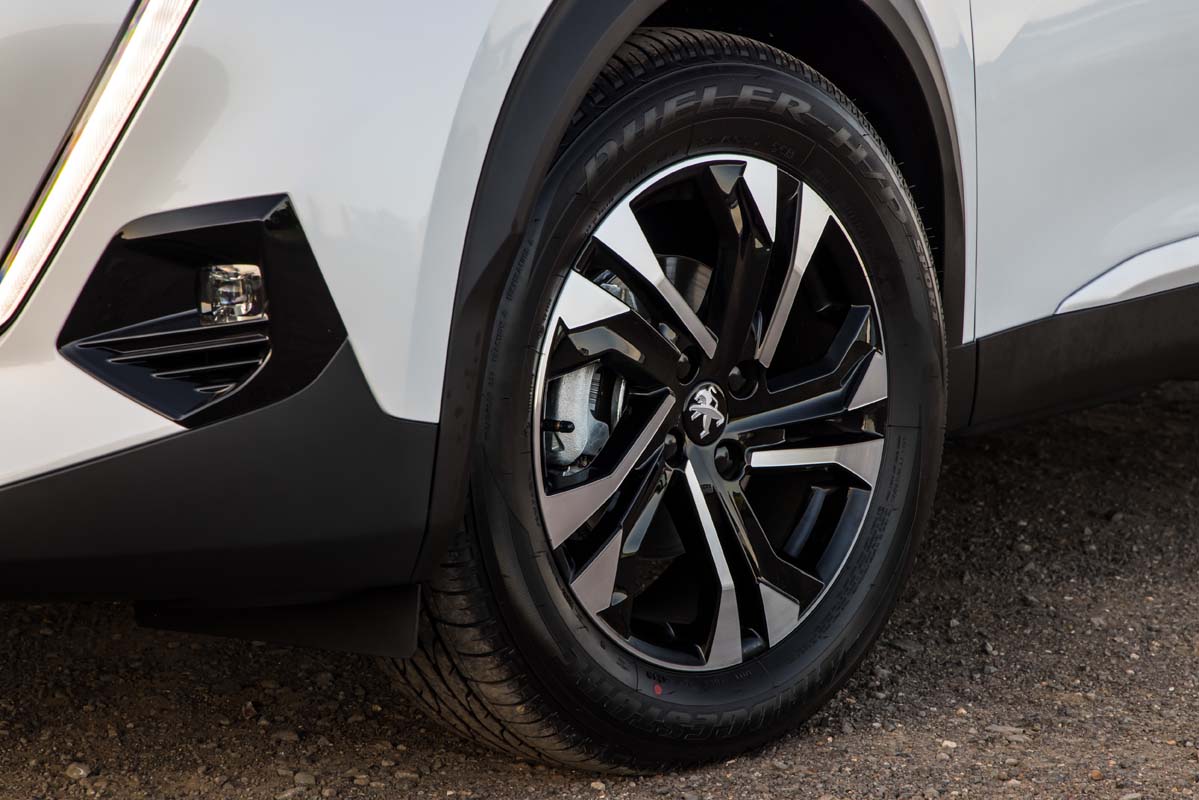 Frustratingly, none of the 2008 models has reverse cross traffic alert, which is a bit weak in 2021. You have to step up to the GT Sport for adaptive cruise control, auto high-beam, blind spot monitoring and lane positioning assist. 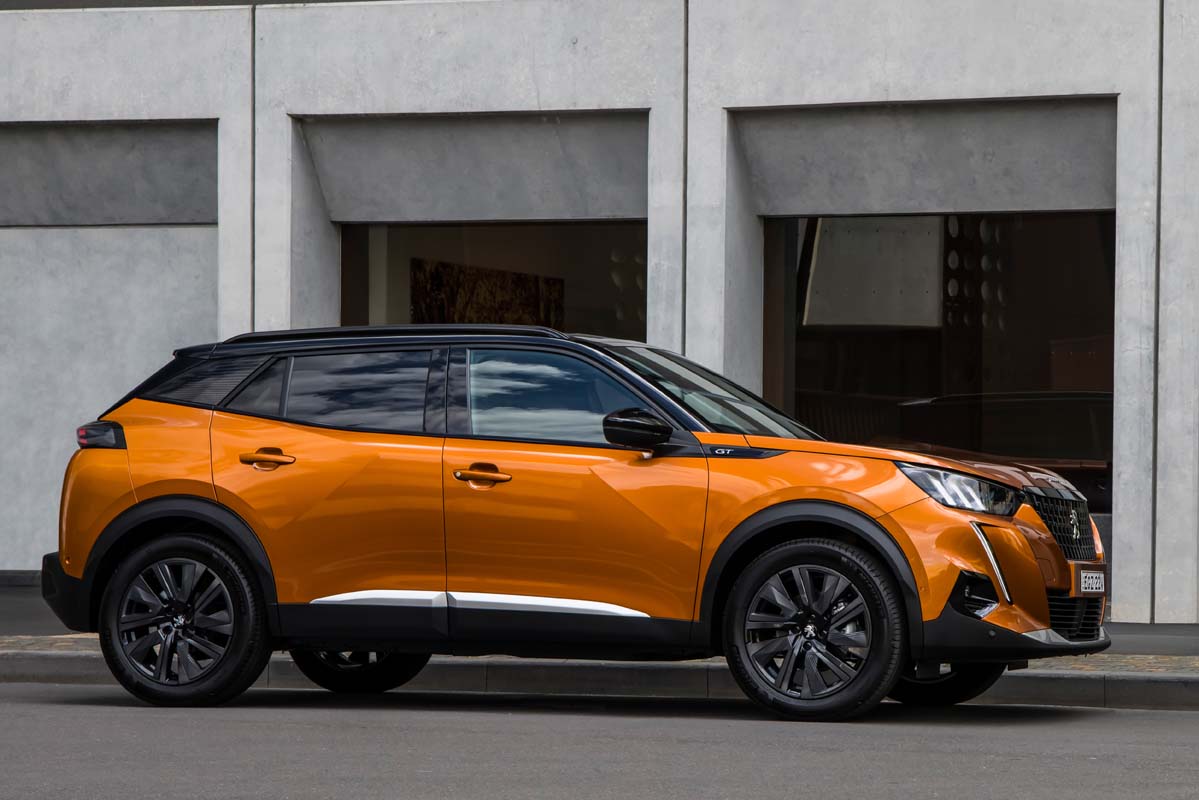 There are about a million other cars in this segment. The second-generation Renault Captur is as big a jump as the 2008’s, so that will have the French car freaks (disclaimer: that includes me) wondering what to do. It’s cheaper, too.

Kia has the Seltos, VW the T-Roc, Skoda the Kamiq, Hyundai the recently-facelifted Kona, Honda the HR-V, Suzuki the Vitara, the list goes on.

The compact SUV segment is an absolute warzone. The local arm is on record saying that the looks will convince folks that the 2008 is worth more than VW – or in the GT Sport’s case, Audi money – and I’ve heard worse theories, so we’ll see what happens. 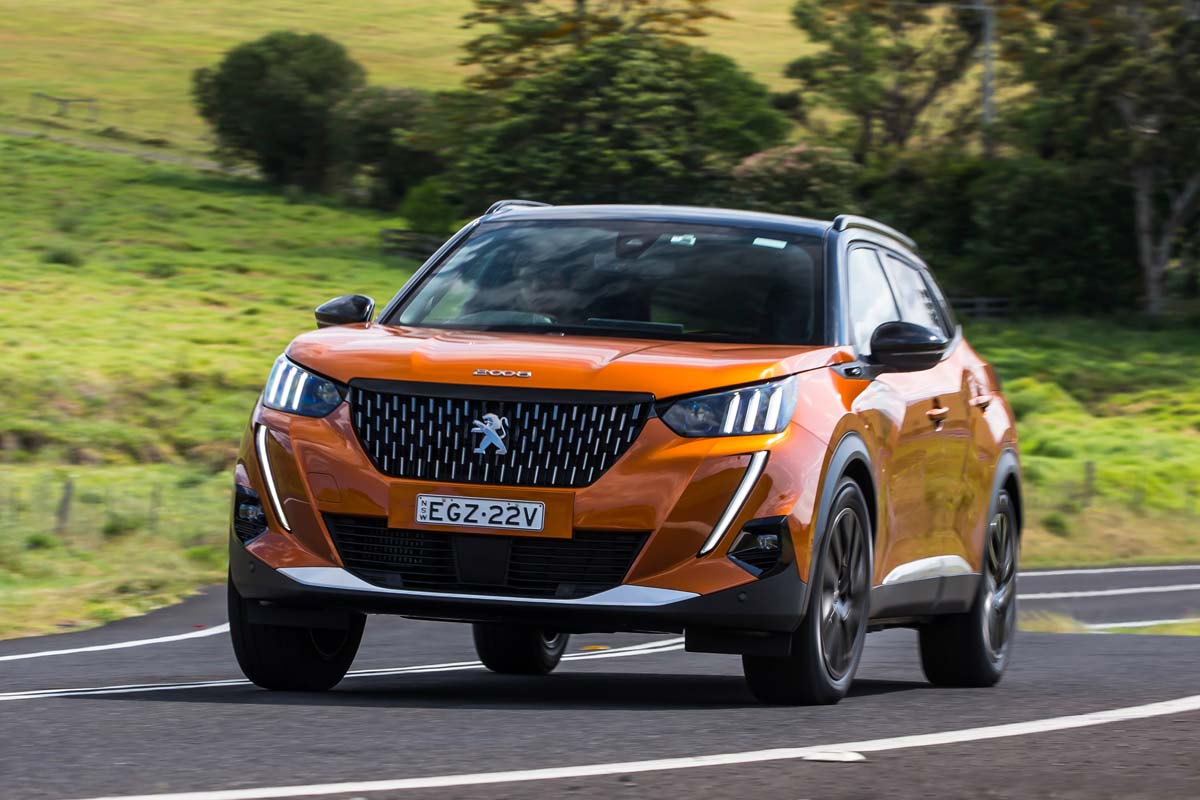 The new 2008 is a car Peugeot desperately needed to fill in the blank. Giving buyers a reason to defect to the French brand with style, good equipment, tons of tech and a good driving experience all points to a commitment to the concept of finding younger buyers to relight the fire for the brand.

Whether those younger buyers are going to baulk at the price is the big question and there’s not a ton of room to slot in an Active entry-level beneath the Allure. Then again, I’m no product planner, I’m just a paid opinion-giver.

I’m keen to spend more time in the 2008 to see what it’s like as a day to day and to really get on top of what it’s like to drive in the dry. Given how good it was in such atrocious weather, my spidey senses suggest it’s good.