Car makers sometimes reap great rewards when taking a chance. Porsche turned around its fortunes when it made its first SUV, and Ford in Australia might not be here if it weren’t for going all-in on the Ranger ute. For Mazda, its experimental model range ‘MX’ is a mixed bag – the MX-5 a sports car legend that lives on to this day, the MX-6 a flash in the pan.

So what of the MX-30? Being an SUV one would rightly assume it already has half a foot in the door of success, and Mazda certainly knows how to make very good SUVs. However, born from within the experimental department at Hiroshima the MX-30 comes as a halo car and does things differently. The design is unlike anything we’ve seen from Mazda before, even though it pertains as an evolution of Mazda’s Kogo design language. The interior is the same, and is constructed of unique recycled materials. Most of all is that when first shown to an audience at the 2019 Tokyo Motor Show the show car housed the brand’s very first all-electric drivetrain, which is quite fitting considering how far-out it looks with a Mazda badge up front. That makes it all the more interesting to see what it is like with a petrol engine and some very mild-hybrid technology-packed underneath the bonnet instead.

There are three models to choose from. Pricing for the base G20e Evolve starts at $33,990 plus on-road costs. The mid-spec Touring is $36,490 and the flagship Astina $40,990. That makes it pricier than the comparable CX-30 which sits alongside the MX-30 on showroom floors. 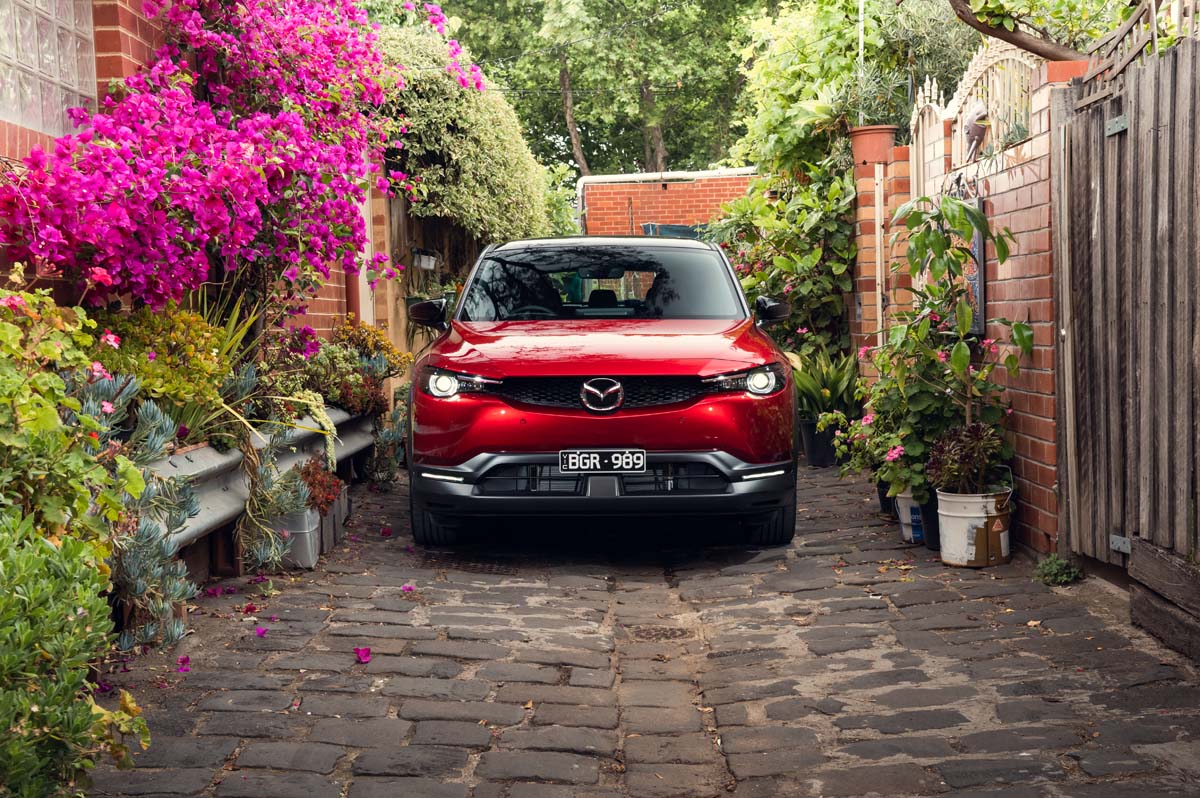 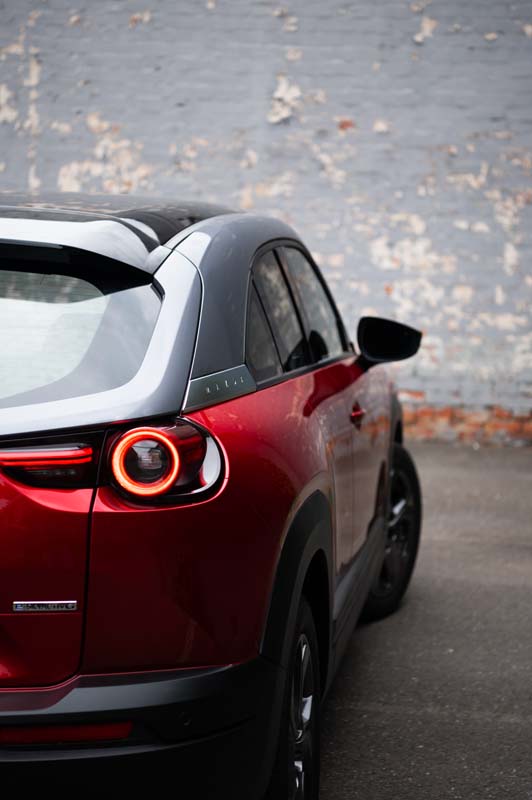 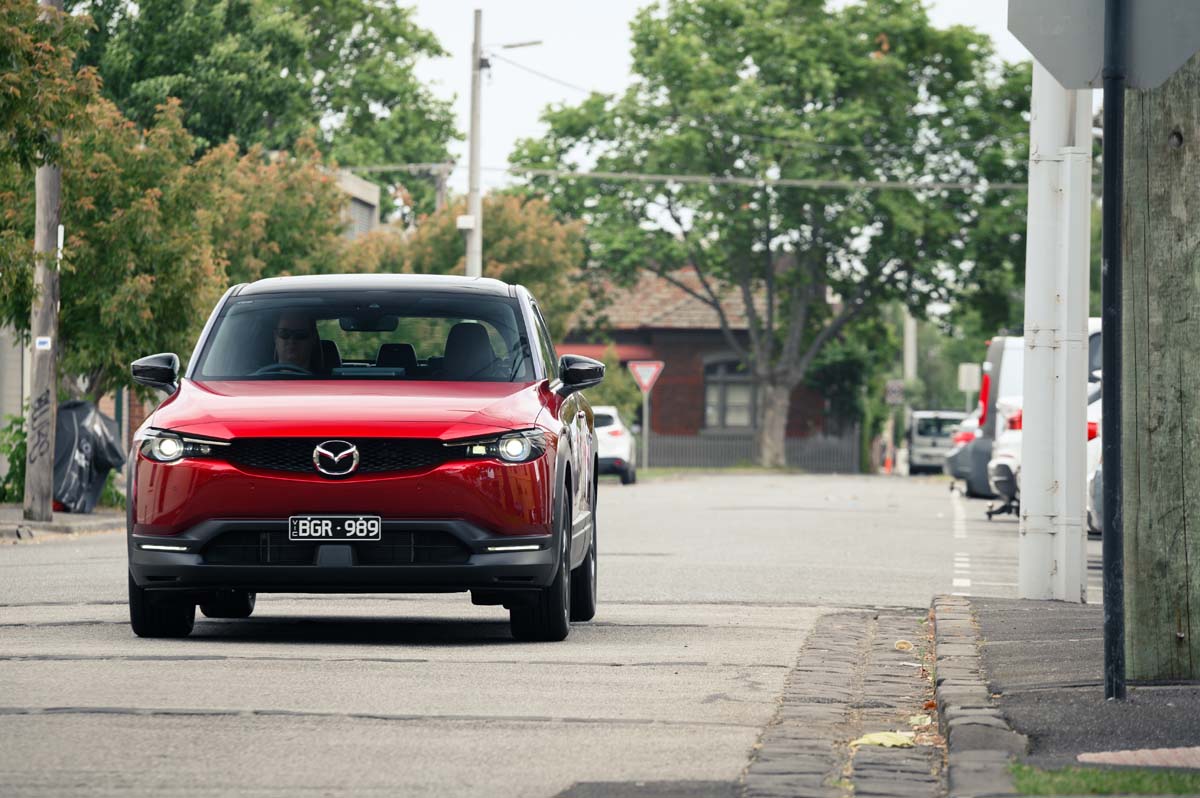 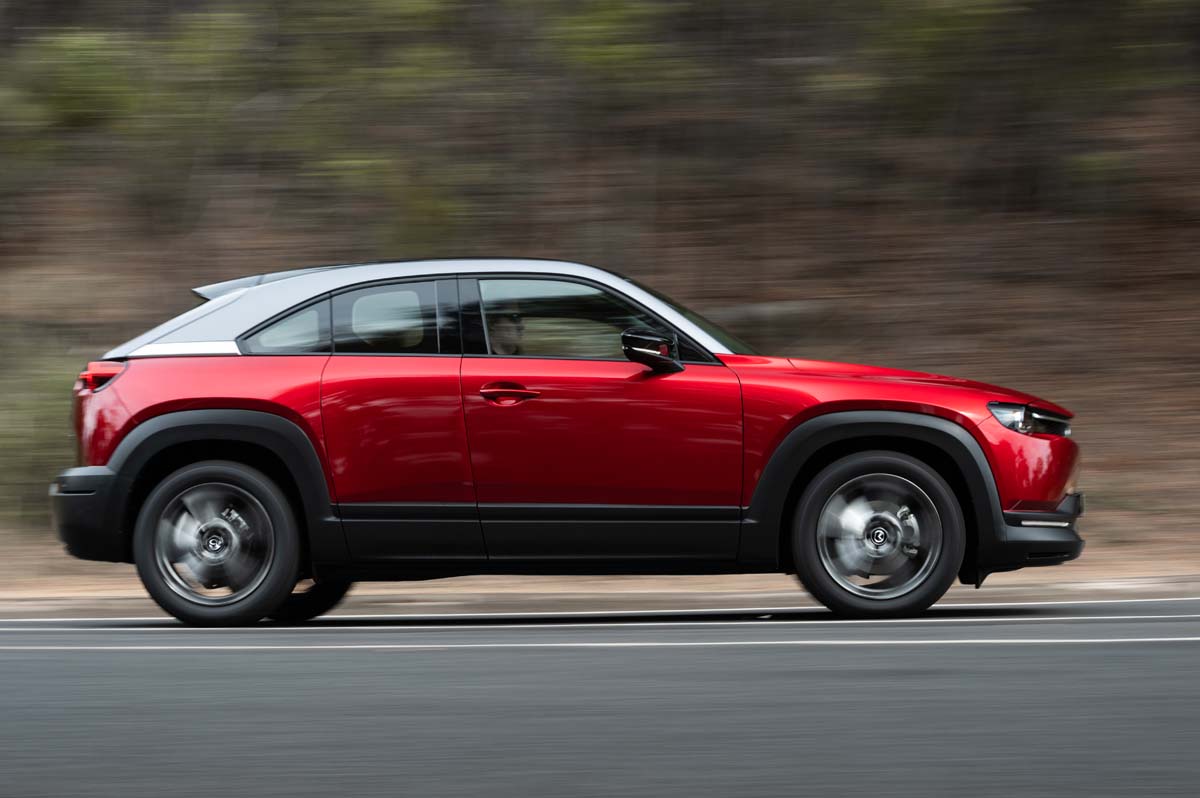 The MX-30 is covered by Mazda Service Select which costs $1942 over five years or 50,000km servicing. Manufacturers warranty is five-years, unlimited kilometres coverage. 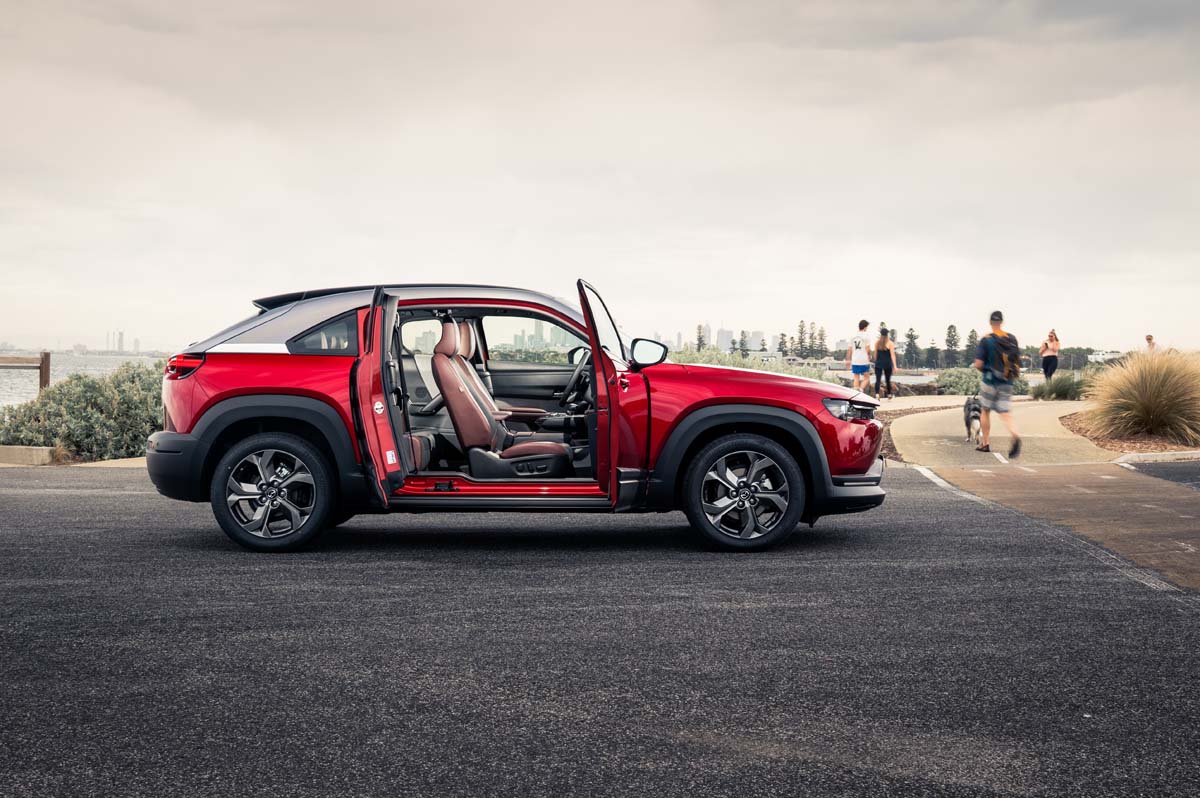 Well it’s not like anything else from Mazda really, though you can see how it also fits right in with the brand’s Kodo language. The swept rear lends an almost coupe-SUV like appearance and snugs the rear doors tightly. These open on the opposite side to convention which Mazda calls ‘freestyle doors’. They are much like the old RX-8 suicide doors but better, thanks to the seat belt mechanism being incorporated into the door so it’s not in the way. And that roof can also be finished in contrasting metallic grey, which looks quite nice over the hero Soul Red paint. A nice detail is ‘MAZDA’ embossed on the rear pillars; Mazda is obviously very proud of its craftsmanship here. 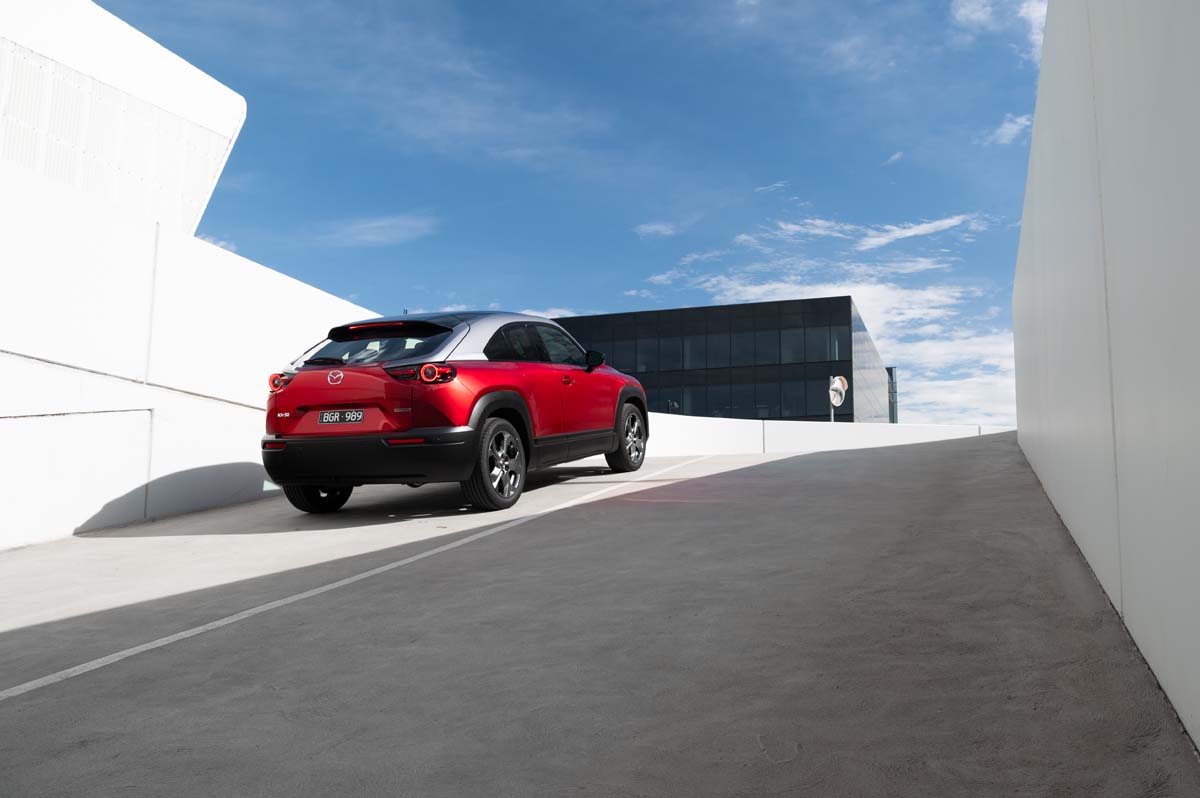 With short overhangs front and back, it is easy to get a good feel for the car’s proportions when driving and parking, but a raked rear and fancy freestyle doors do affect vision over your shoulder, to the point that looking through both flanks is not great although there is blind-spot monitoring and, in Astina and with Vision Technology pack, a 360-degree camera system.

This is a very nice cabin and the material choices and the design feels similar to the wow factor that the BMW i3 delivers. It’s as close to hygge as you get from a car interior. 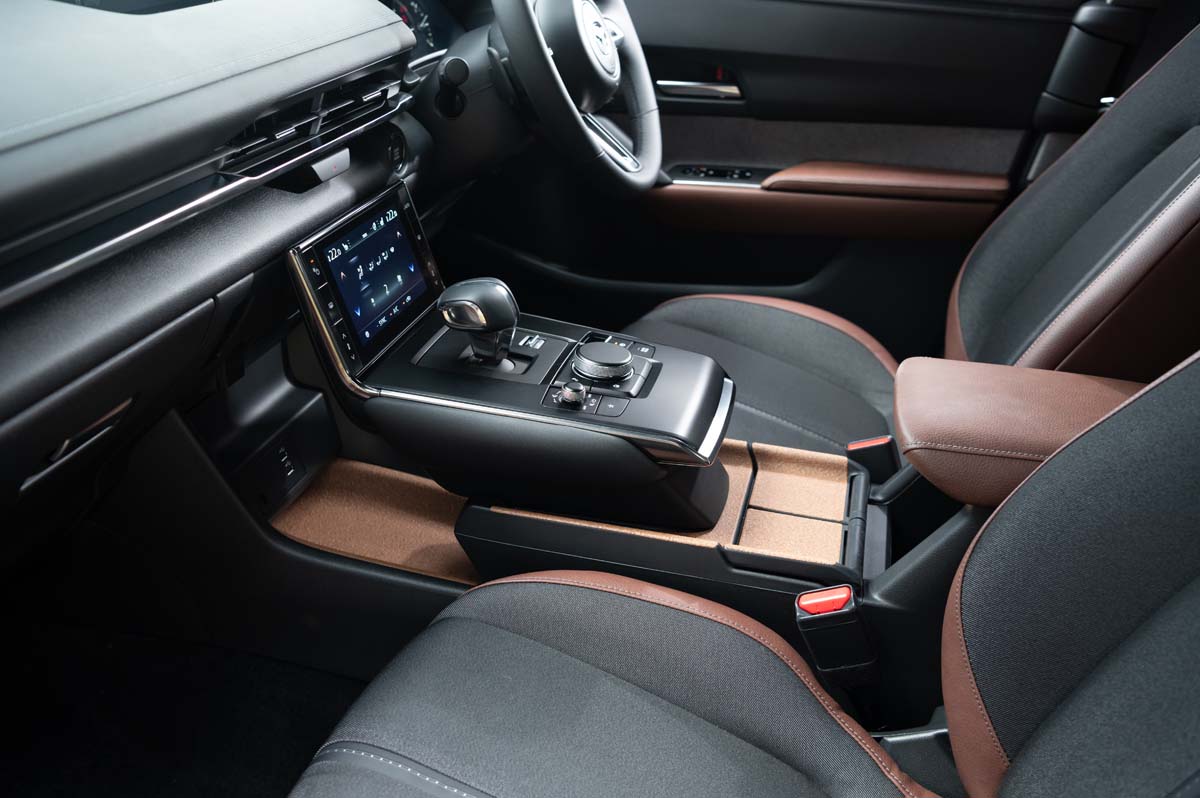 On the list of materials is cork – which pays tribute to Mazda’s cork manufacturing roots, recycled PET bootle plastics, recycled linen and leather that uses water-absed processing rather than harsh solvents, called Maztex. They are all nice, and particularly the base Evolve’s fabric seats, which don’t feel base grade. The contrasting grey recycled fabric looks very nice against the darker plastics and light tan cork console, and the recycled plastics don’t have a bland soulless reflection due to the reused fibres showing through. A nice centre piece is the floating centre console (the gearshift is fly by wire) with cork pads that flip up to reveal cup holders underneath. 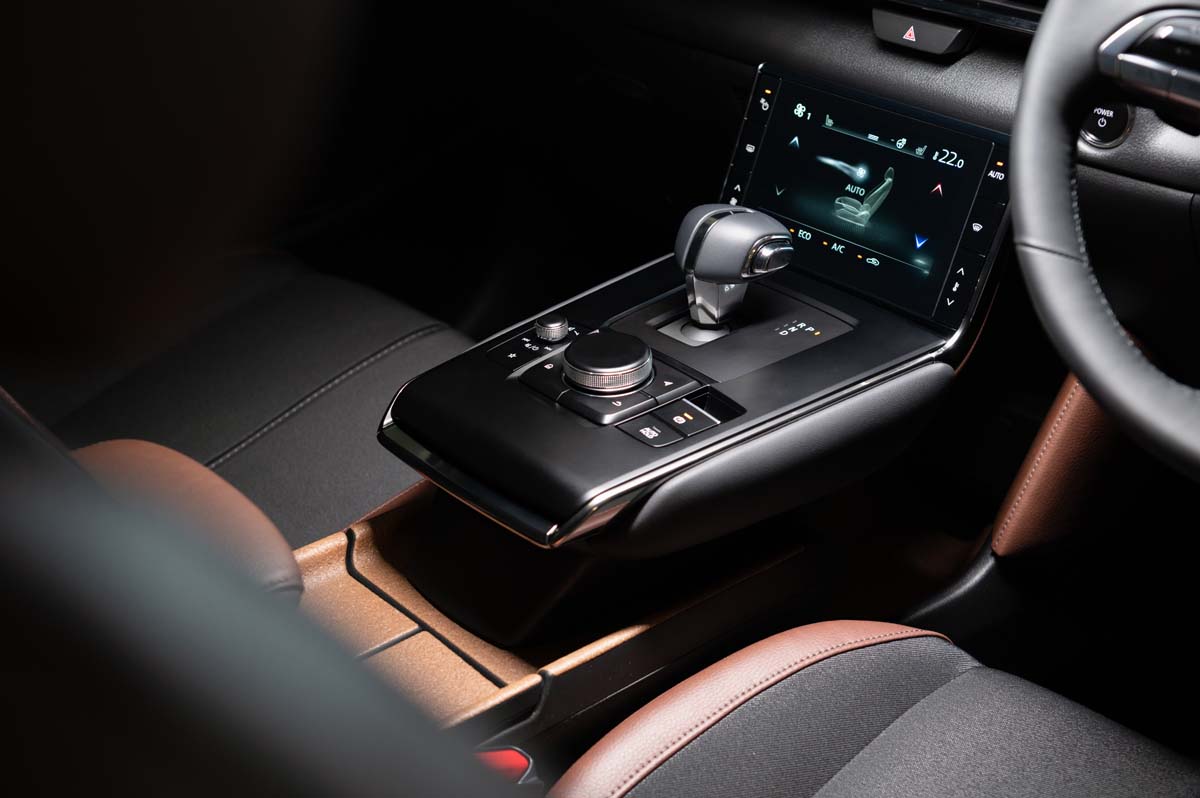 Ergonomically it is a great seating position too, despite a somewhat compact cabin. The driver’s seat has a good range of adjustment and likewise the steering wheel. We should expect this though as Mazda’s new Skyactiv platform underneath is built around the philosophy of balance and a ‘human-centric’ approach to position and feeling. The rear seats are surprisingly roomy – at least for a car this size. They are not swimming with CX-8 levels of legroom, but fine for adults and ingress is fine through that freestyle opening. Missing are rear air vents, and the 311-litre boot has no electric opening in any grade unlike that close rival the CX-30. 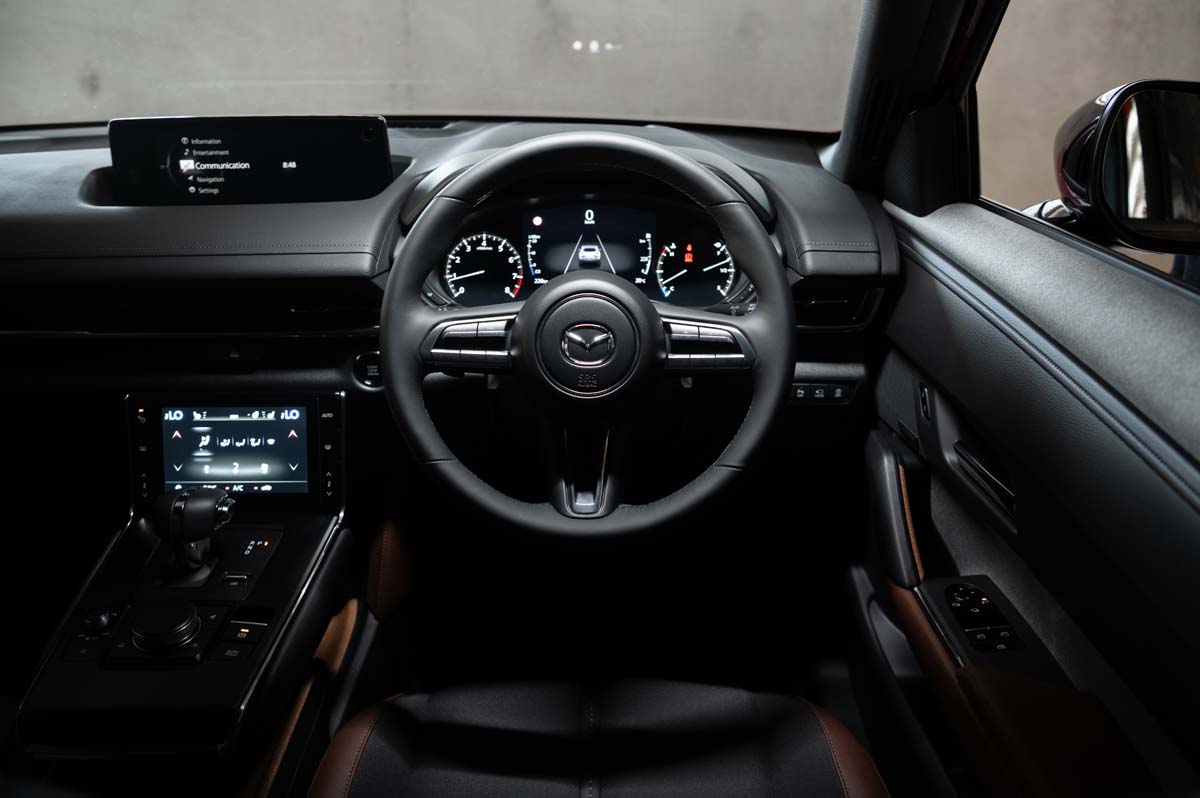 HOW SAFE IS IT? 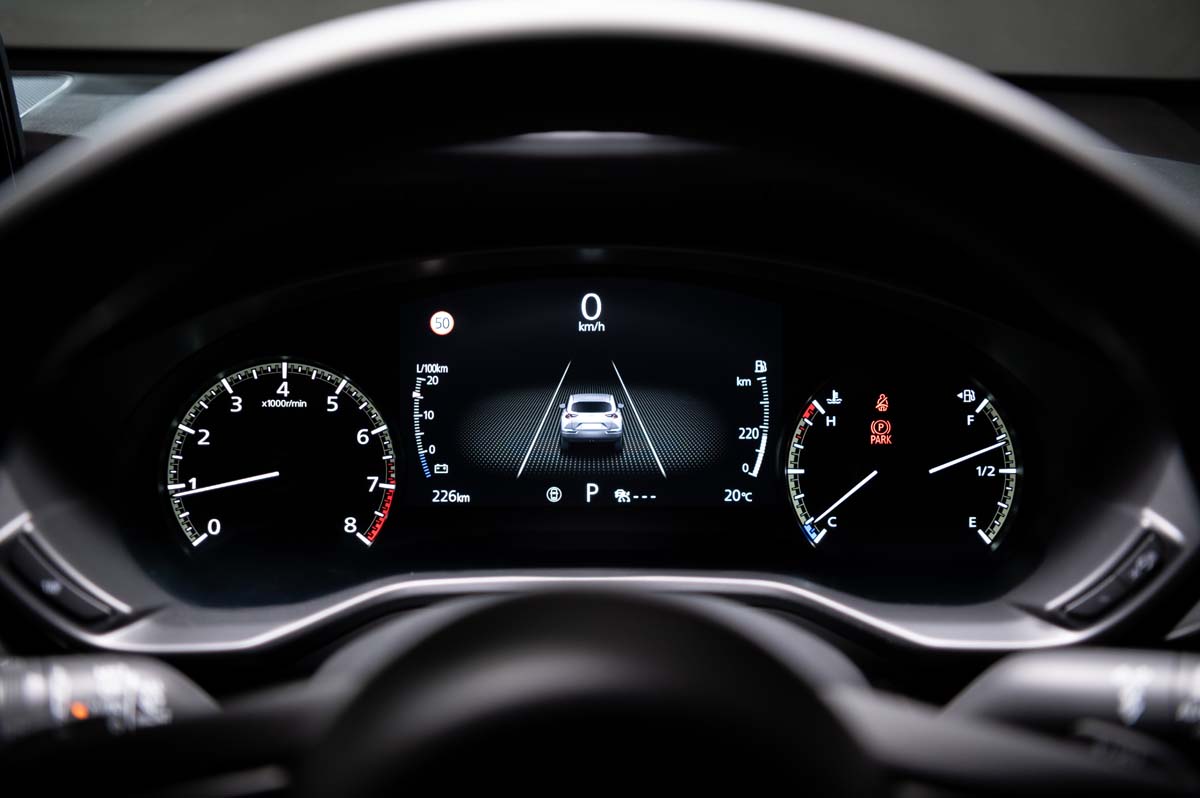 There are three screens and the main infotainment measures 8.8-inches. It’s much like the setup in the Mazda 3 and CX-30, so it has a nice crisp resolution, punchy colours and sits at a good heigh in the dash. It can be commanded via touch or a rotary controller, and shortcut buttons make navigating quick and easy. 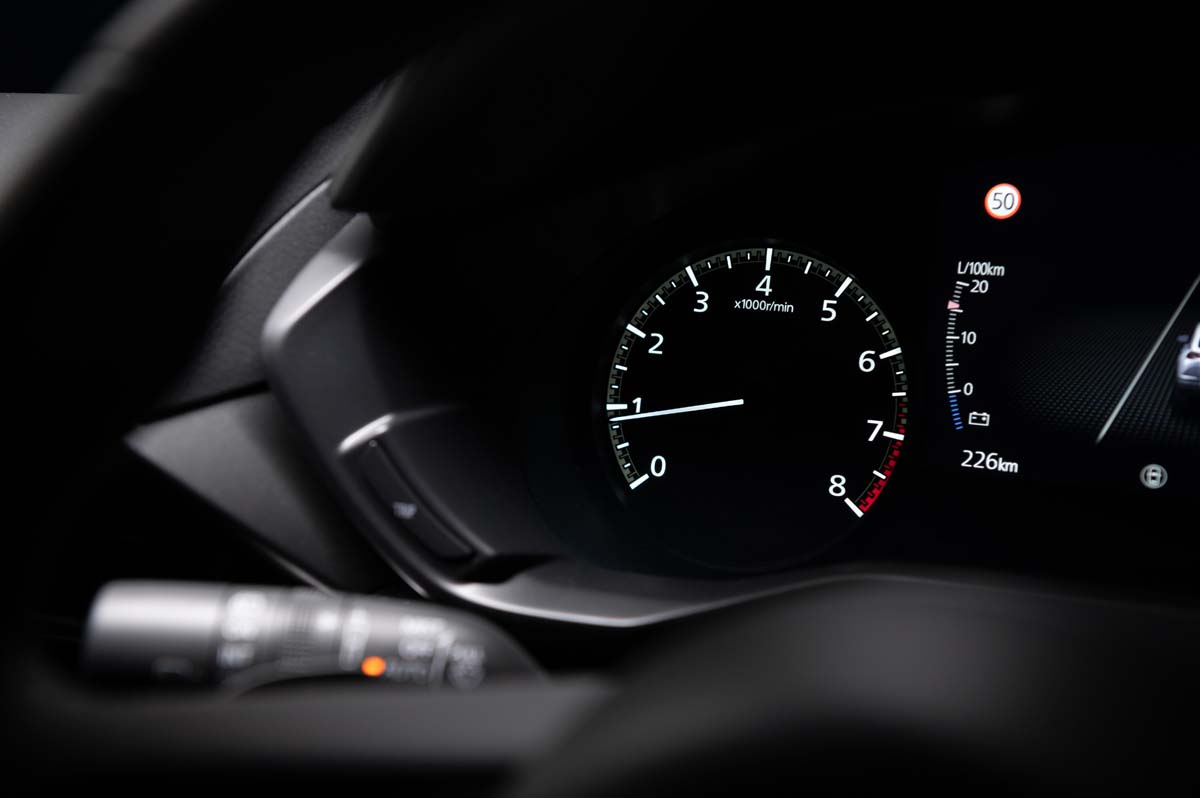 The other main screen sits between the dash and centre console and is the first time Mazda has used a touchscreen for climate controls. Unlike VAG products it does not have haptic feedback but it does work rather snappily and is a nice touch – it elevates the cabin’s premium-ness factor…if that’s a thing. 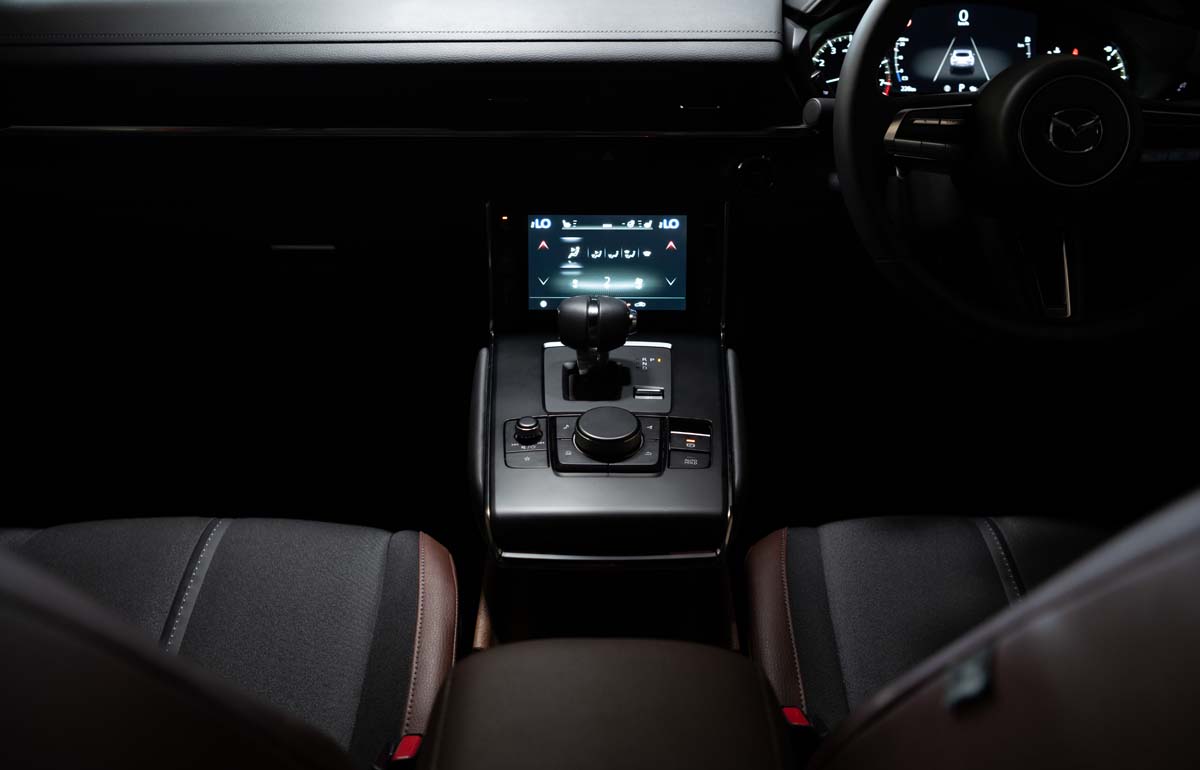 Finally, there’s is a smaller screen in the dash between the traditional dials for tachometer and speed. This show adaptive cruise control and other car settings (some of which is also displayed on the head-up display on the windscreen) and will be crucial for the upcoming all-electric version to display battery charging and range information.

The choice of engine here is in some ways puzzling, as the 2.0-litre four-cylinder petrol is an older unit in Mazda’s artillery and not particularly spritely. The 2.5-litre in Mazda’s stable offers better performance for marginal fuel economy compromise and the new 2.0L Skyactiv-x which is both more powerful and more economic is better again. However, both of those two engines are not options. 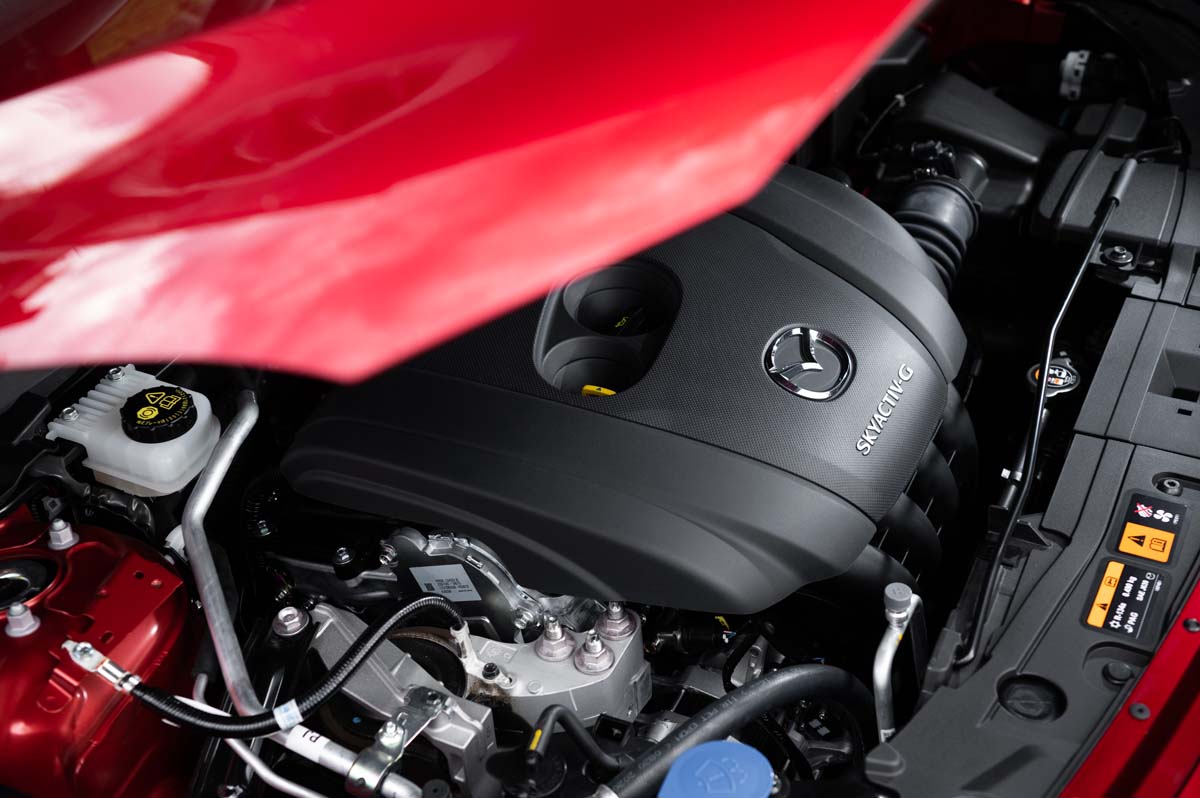 Instead, we get the older 2.0L with ‘M Hybrid’ which is a system that has been available for some time in the US and Europe. It is not a hybrid on the same level as say a Toyota Prius or Hyundai Ioniq because the battery and voltage are too small to offer beneficial electric-only driving. What the belt-driven integrated starter generator in M Hybrid does well though is smooth out engine stop-start so it can happen while rolling up to the lights and taking off, which is when you usually feel such systems at their worse. With M Hybrid, the transition is barely noticeable and as European emissions testing proves it does bring lower emissions. 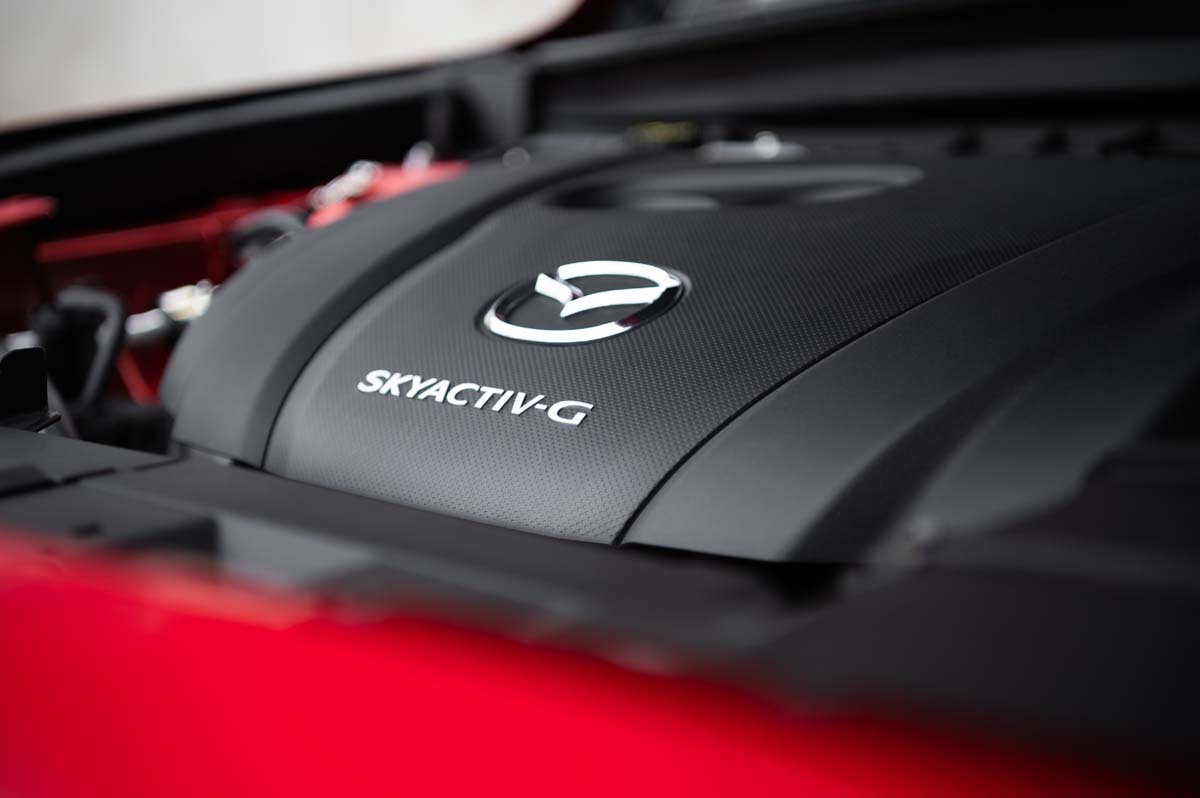 Quite simply, if you are really into having the most efficient and low emissions drivetrain available you’d wait for the electric motor version or the probable rotary-extender version. But as Mazda Australia seems to rightly understand, most customers will not really be that bothered and this here engine will account for the bulk of sales. In the end, it offers something electric does not – the ability to quickly refill and drive a long distance without worrying about how far the battery will last, and the performance is still good. It doesn’t have much zest, but it’s not gruff and you don’t even think about it when driving around town, save for a big hill when you need to kick back a gear in the six-speed auto and let it rev. 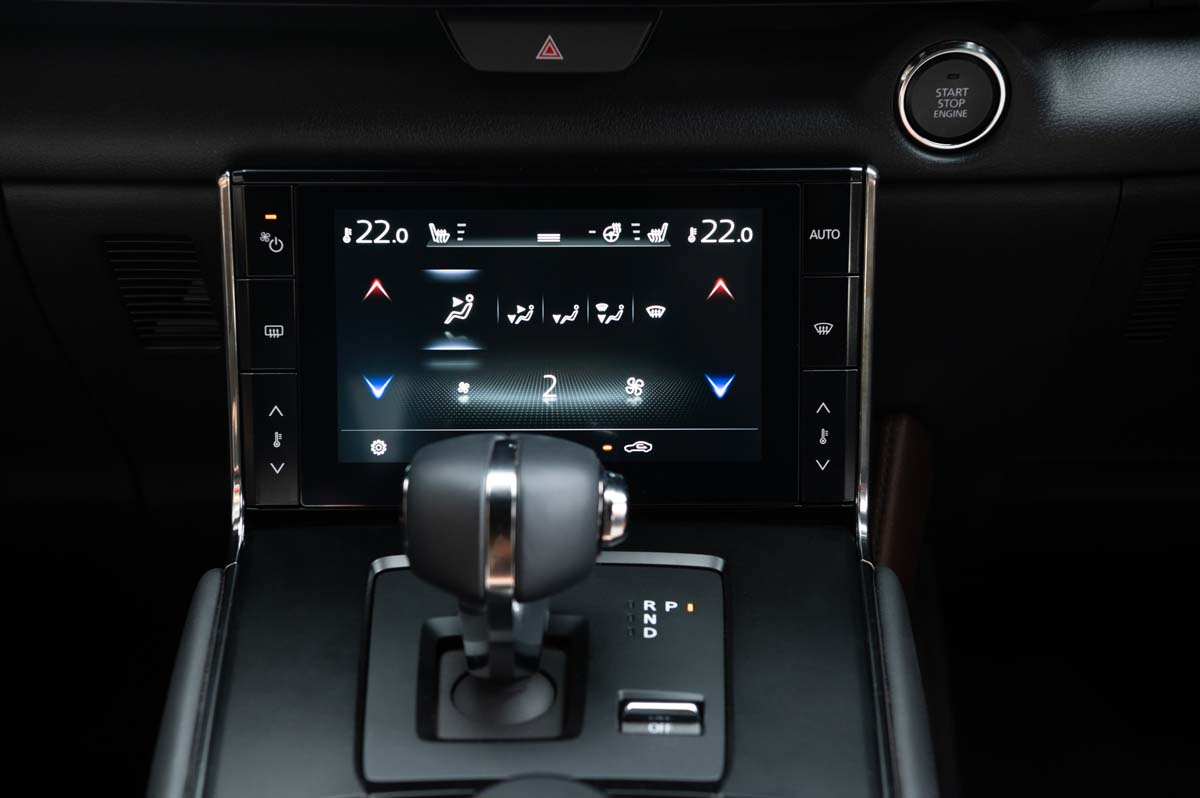 The Mazda MX-30 M Hybrid has a claimed fuel consumption rating on the government combined cycle of 6.4L/100km, and in tested we averaged 8.0L/100km. 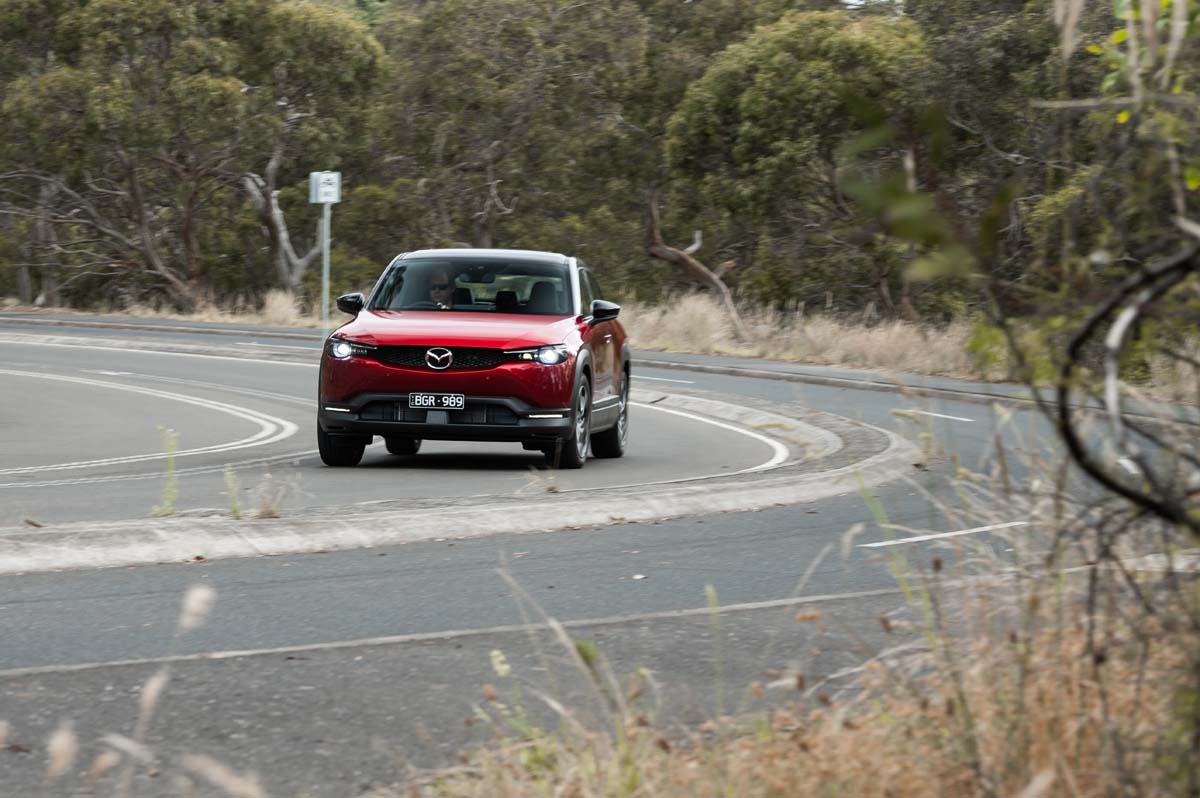 While the engine might be average for the segment the ride and handling are quite nice. The steering is light but direct and silky smooth with good turn-in and plenty of grip up front. You can certainly push along on the right road and the feedback from the chassis is very positive, providing an enjoyable ride that’s compliant over bumps and settles quickly. 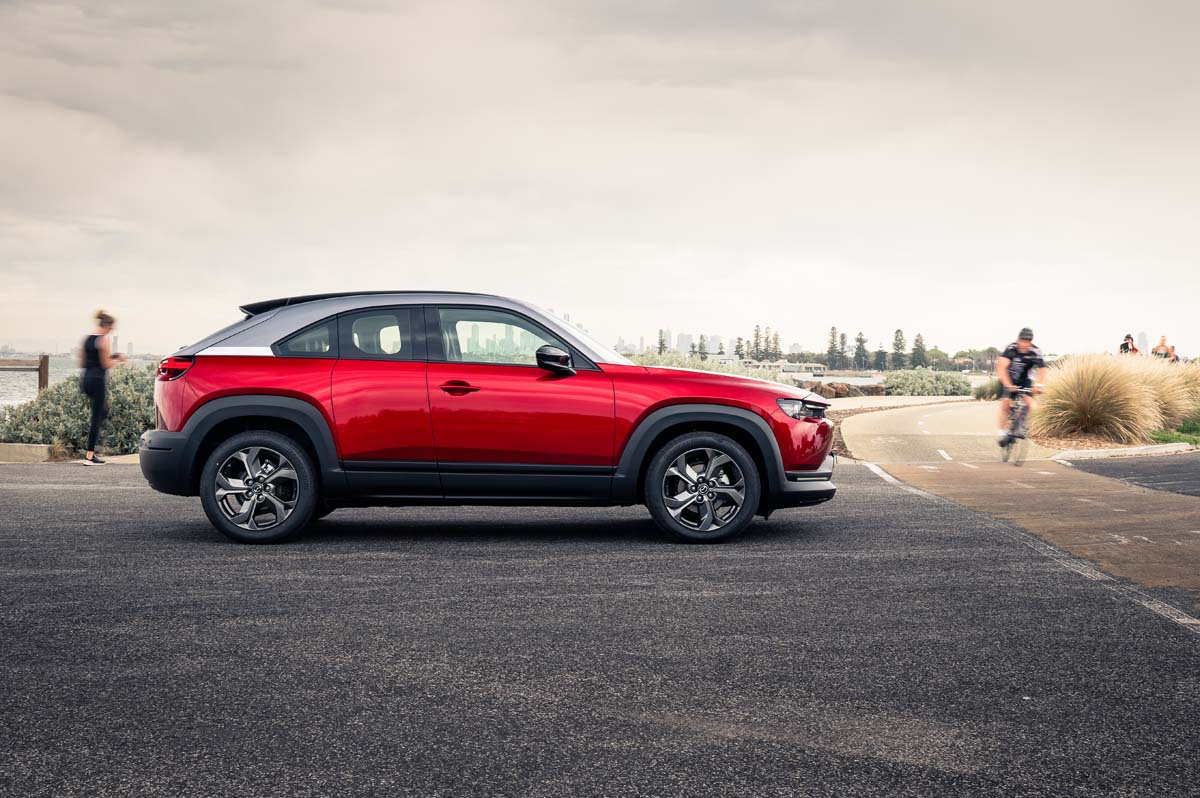 We didn’t really get to drive much in town though the faultless M Hybrid stop-start and progressive brakes and throttle make it quite smooth at slow speeds. It should be a fine town car. Over some rough roads, the cabin noise was rather hushed too, despite reasonably large 18-inch hoops underneath. 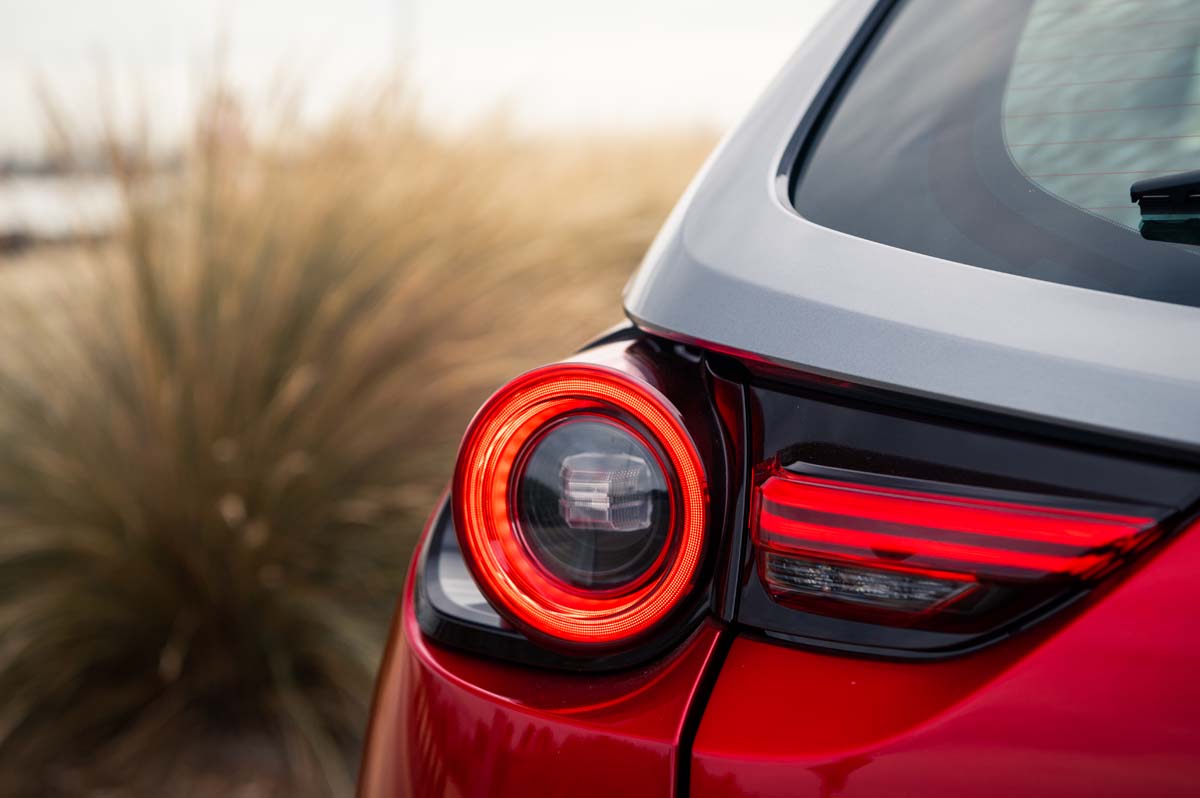 On country roads it’s a good cruiser and the adaptive cruise control and lane-keeping assist (servo-controlled steering according to lane markings) work very well, some of the best in class. The ride is quite tied down over bumps and crests at speed and it always has solid and safe confidence.

In the spectrum of Mazda models it performs very well, on par with the likes of the Mazda 3 and CX-30 – all cars that ride on the new Skyactiv platform. 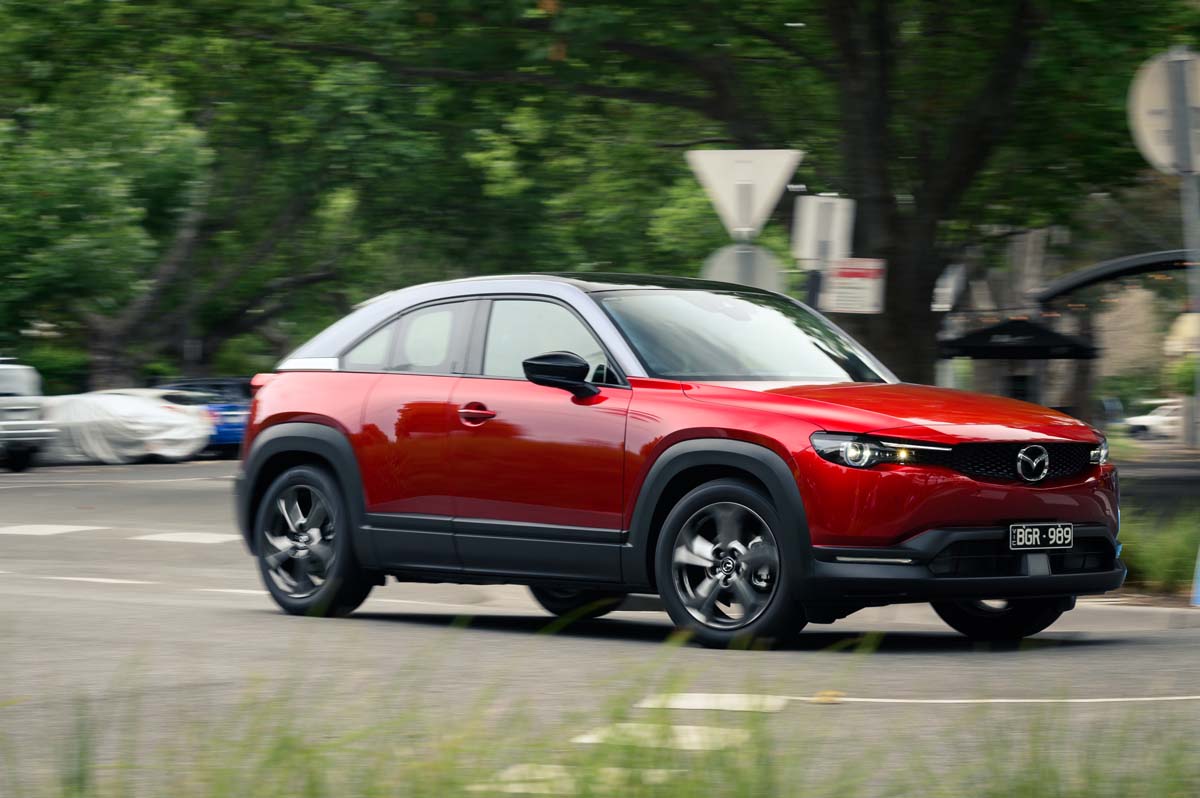 As an attractive car for those with a penchant for style and standing out the MX-30 hits the mark. There’s really not much like this when you consider the enviro-friendly materials and quality cabin fitout, even if the price is a touch over its closest sibling the CX-30. But keep in mind that it features some great safety tech and mod cons, and that the base Evolve is really quite a nice little thing, and it’s a fair standard. The engine here does not match the upstream quality elsewhere, but of all the features to compromise to keep the price palatable, it goes relatively unnoticed.