The Jeep Compass Trailhawk is a compact SUV with four-wheel drive (albeit on-demand and no low-range), a monocoque body structure and fully independent suspension that’s ‘Trail Rated’ on the Rubicon in the USA.

Prepared as the most capable off-road model in the Compass lineup, the Trailhawk has a redesigned front bumper for improved approach angle, revised rear bumper and an off-road suspension package that lifts running ground clearance to a claimed 225mm, up from the Limited 4×4’s 212mm, and an increased maximum wading depth of 480mm.

Trailhawk also offers Jeep’s Active Drive Low 4×4 System for off-roading in what is an SUV platform.

The system has a Drive Mode selection, a 4WD Lock which suggests that it locks drive 50:50 front to rear, and then there’s the 4WD Low button. This isn’t low range and while it touts a 20:1 crawl ratio via 4WD Low, engaging 4WD Low doesn’t change the crawl speed the Compass Trailhawk is capable of. Rather, 4WD Low forces the vehicle to start in first gear rather than its default of second gear, tweaks the throttle sensitivity, and tweaks the stability control and brake traction control, which Jeep calls a Brake-Lock Differential System. 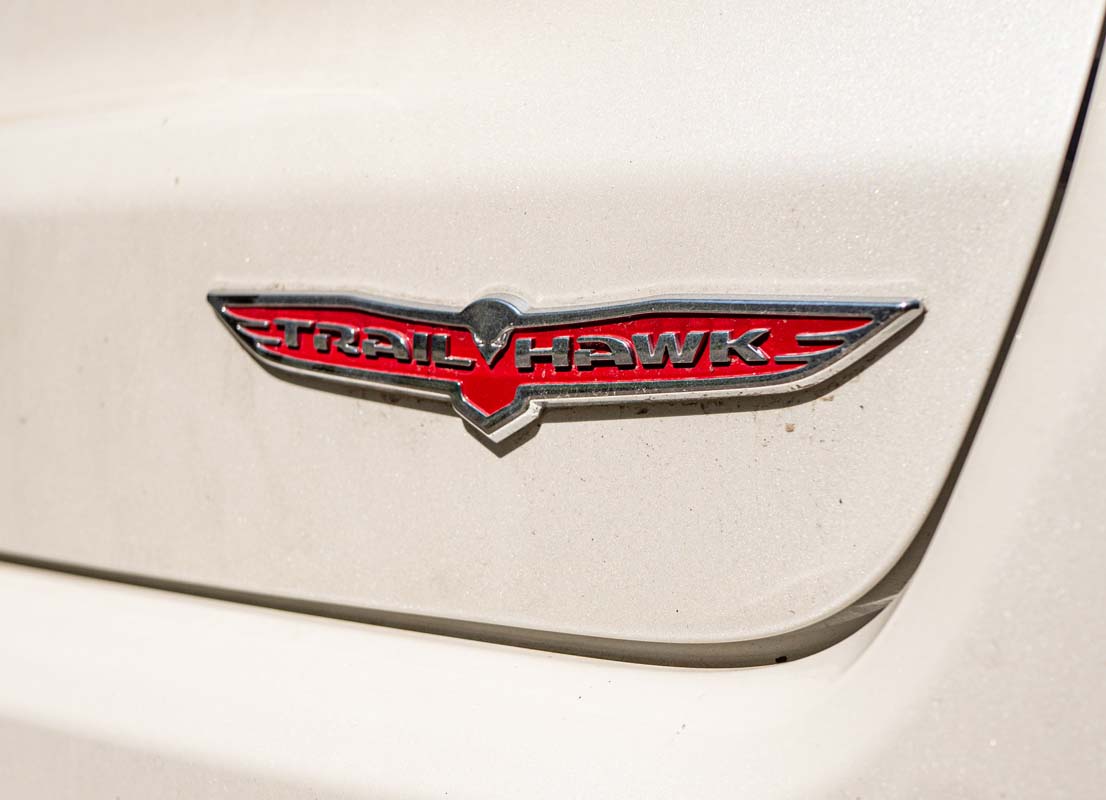 It’s just brake traction control, meaning one wheel loses traction and its stopped with drive going to the wheel(s) with traction. The on-board computers can also tweak the ABS if you’re driving on dirt roads, forcing the wheel to slip less than it would on bitumen, allowing you to build a wedge of dirt ahead of your tyres and stop a little quicker on loose surfaces. 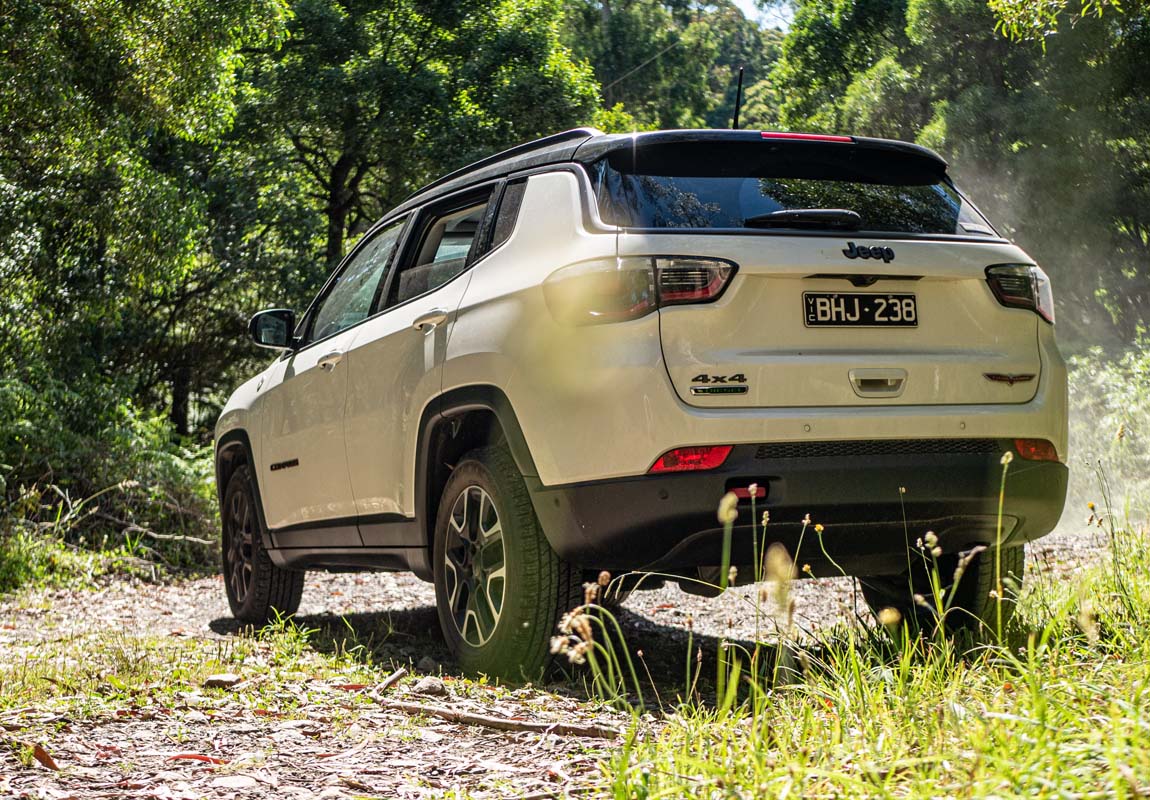 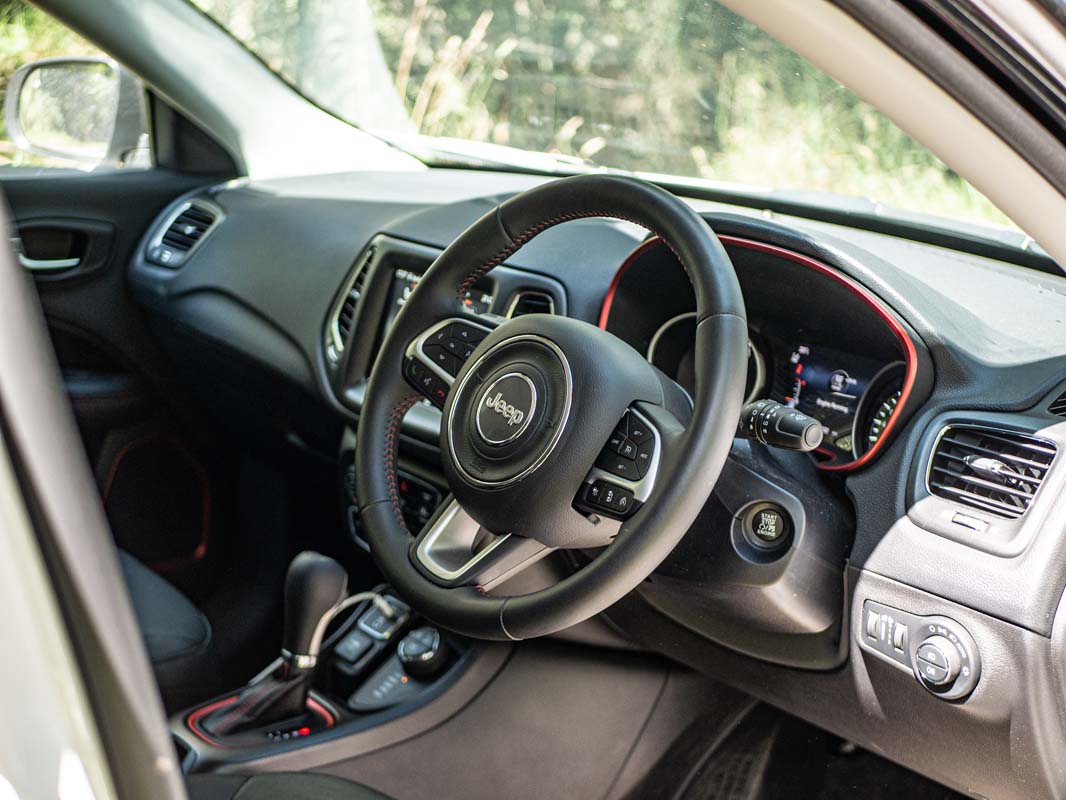 Looks are quite deceiving for the Compass Trailhawk’s interior. The compact exterior dimensions suggest it’ll be tight on the inside, but it’s class competitive for room inside the cabin, both in the front and the back.

The Trailhawk trim adds red accents which lift the interior beyond that of its lesser siblings in the range. There’s plenty of soft-touch materials used around the cabin, with harder, but fine-grained plastics used in the places where you need stronger, harder-wearing stuff, like the door linings and the under-side of the dashboard. 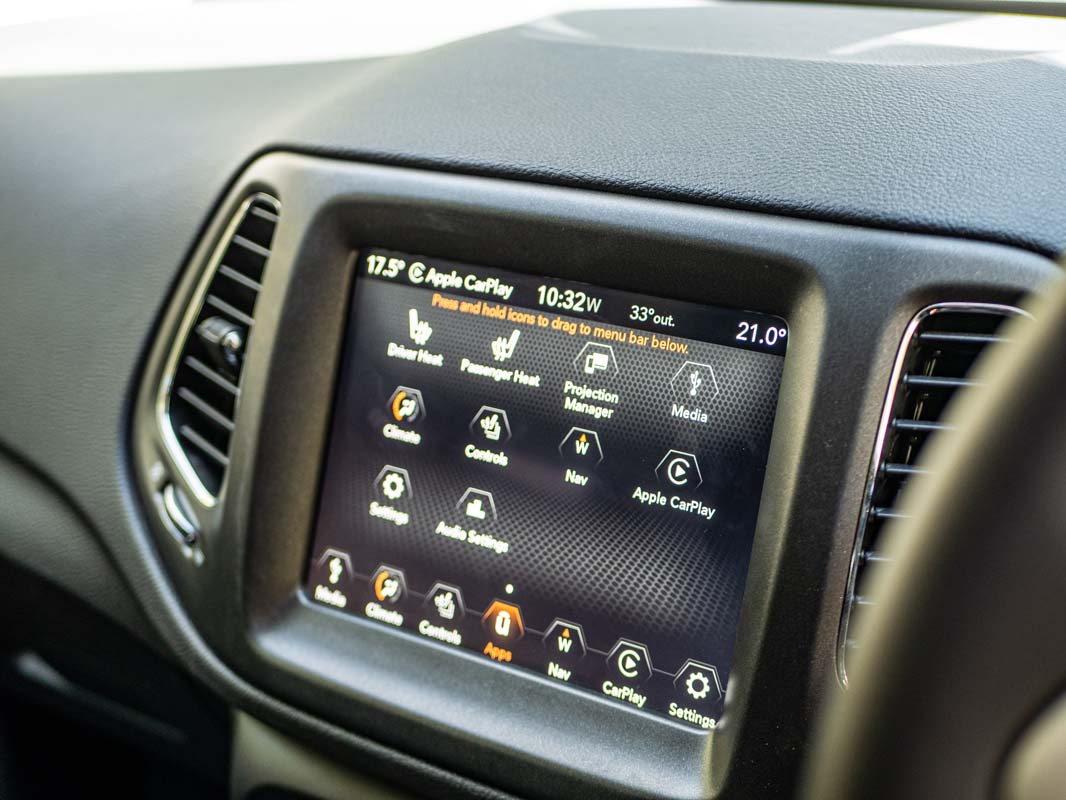 The dashboard is dominated by the 8.4-inch touchscreen which controls everything from climate, to your phone, and navigation, and uses Apple CarPlay and Android Auto for connectivity. The Compass runs the latest-generation Uconnect (and we’re writing up a longer review of the system) and it’s a ripper of a system, easily one of the best infotainment units you’ll find on any car in this segment. The menu structure is easy to follow and the buttons respond beautifully to the first touch. Using the virtual audio and climate controls is much easier than using the hard switchgear at the base of the dashboard.

There are storage bins in all four doors for 500ml drink bottles and two cupholders on the centre console. There’s a small storage bin between the two front seats with a padded lid that slides forwards and backwards. 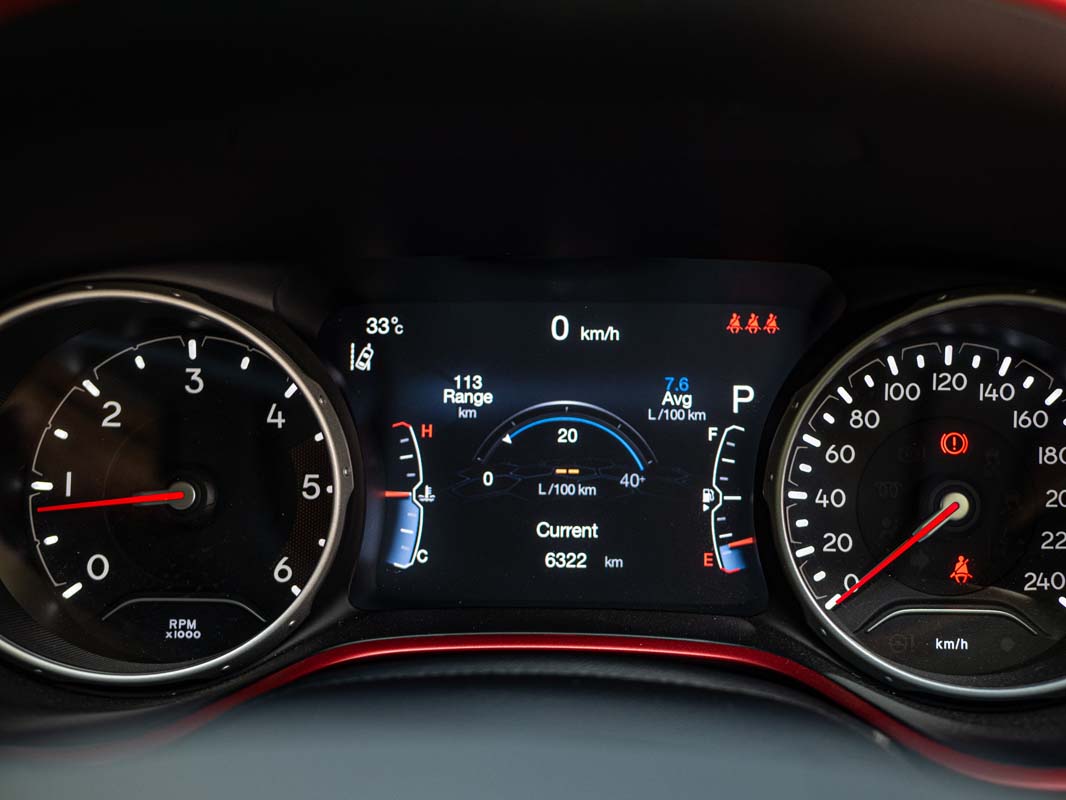 Climb into the back of the Compass and there’s plenty of room for two adults in the back. The almost flat floor in the back means you can sit three people across the back, but not three adults; there isn’t enough elbow room. Legroom is okay; there’s decent foot wiggle room too which helps a lot and the rubber floor mats do a good job of catching dirt and mud before it gets to the carpet and they don’t feel slippery when your shoes are wet.

There are directional air vents at the back of the centre console along with 12V and USB outlets, and the back of the middle seat folds down to form and arm rest but, at the same time, leaves a hole into the boot. This is either a handy or untidy feature, depending on your point of view. 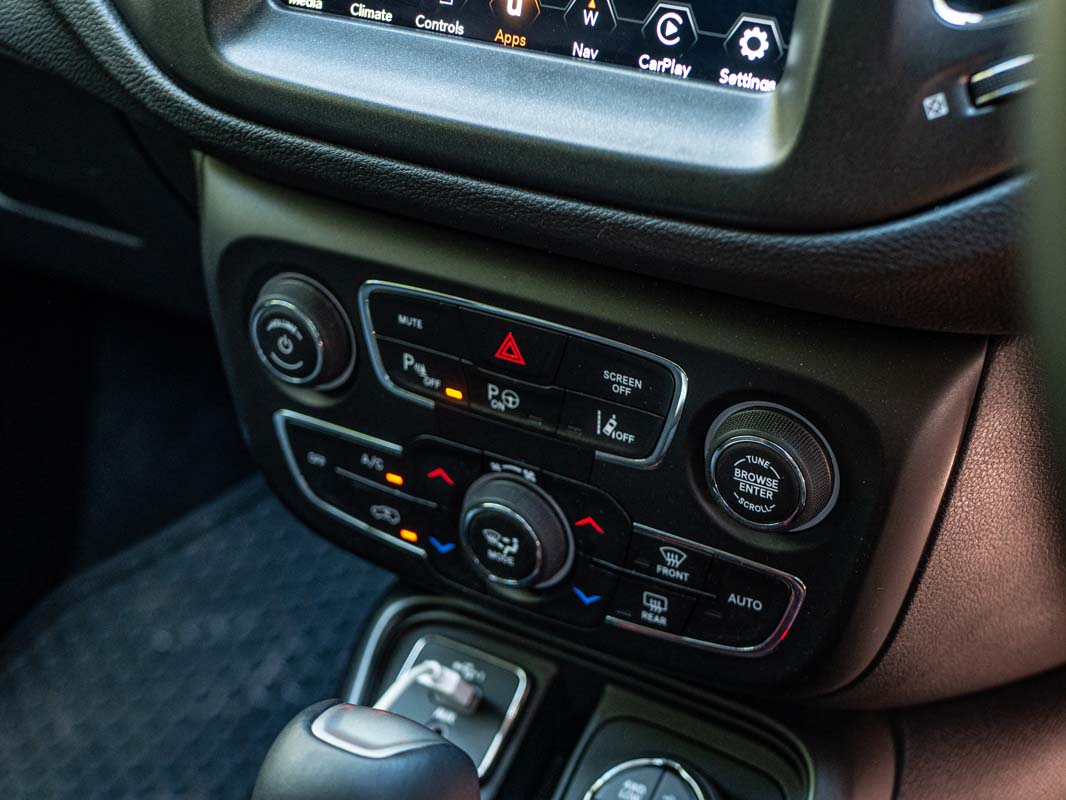 There’s 438 litres of storage space in the boot and it’s a nice square space, just a bit small, that said, there is a full-size spare, on a steel rim, under the floor which is more than you get with many of this car’s competitors. You can increase the storage space by dropping the 60:40 split-fold rear seats, but you’ll need to find somewhere to stash the hard parcel shelf. 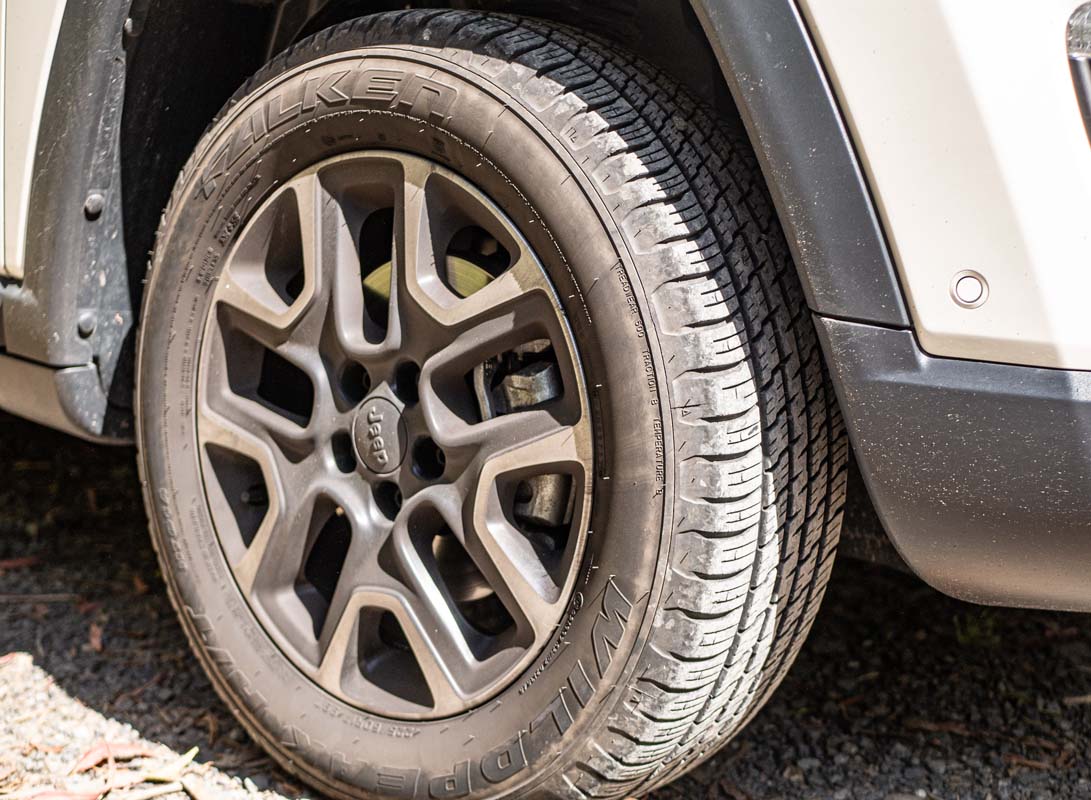 Under the bonnet of the Compass Trailhawk is a 2.4-litre four-cylinder turbo-diesel making 125kW at 3750rpm and 350Nm of torque at 1750rpm. This is mated to a nine-speed automatic transmission.

The transmission tends to run to top gear as quickly as it can and this often leaves the thing feeling a little lethargic in some situations, like when you’re overtaking on hills or just trying to maintain your speed on a hill. 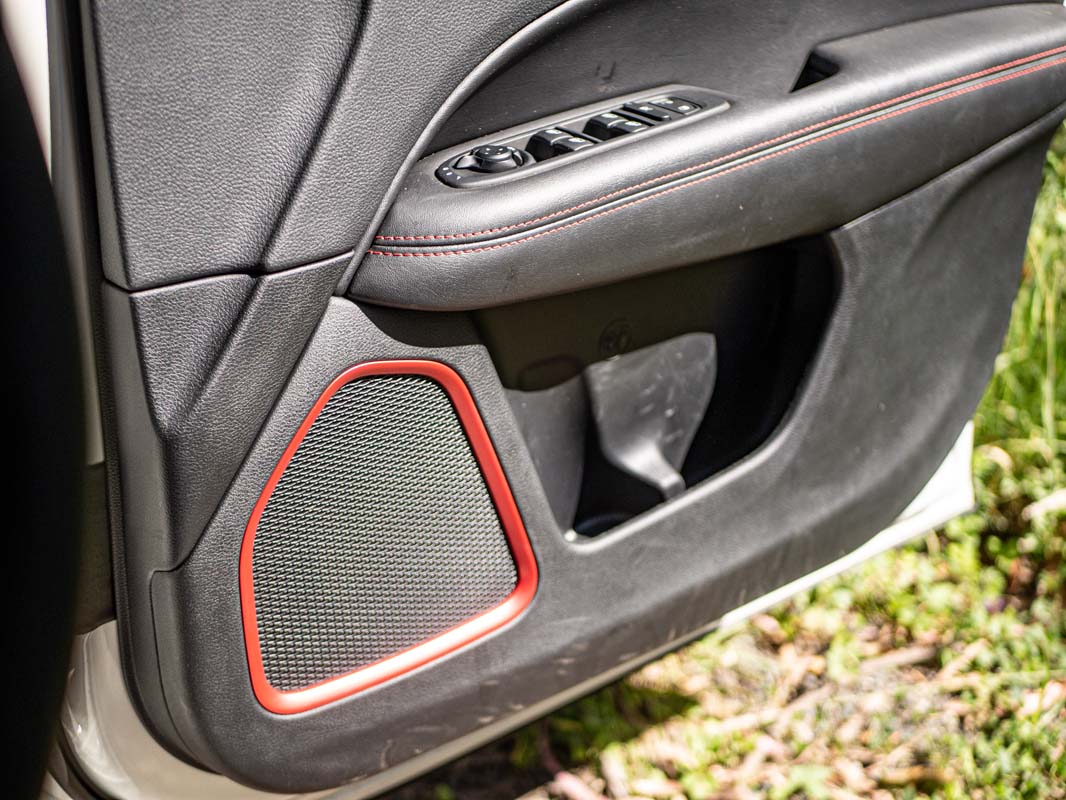 This turbo-diesel isn’t a quiet engine, although once you’re at a constant speed and the transmission jumps to top gear then its clatter does become hushed. And, there’s little wind or tyre noise.

The Compass Trailhawk, despite its slightly higher ride height (2.5cm more than other models), offers a more sporting ride than you might expect. The short-travel suspension thumps off harder hits, but the suspension settles with weight on board and we suspect it was tuned with four-up in mind. On smooth roads the ride is great, but as the surface breaks down, as it does on some sections of our road loop, the ride becomes knobbly. 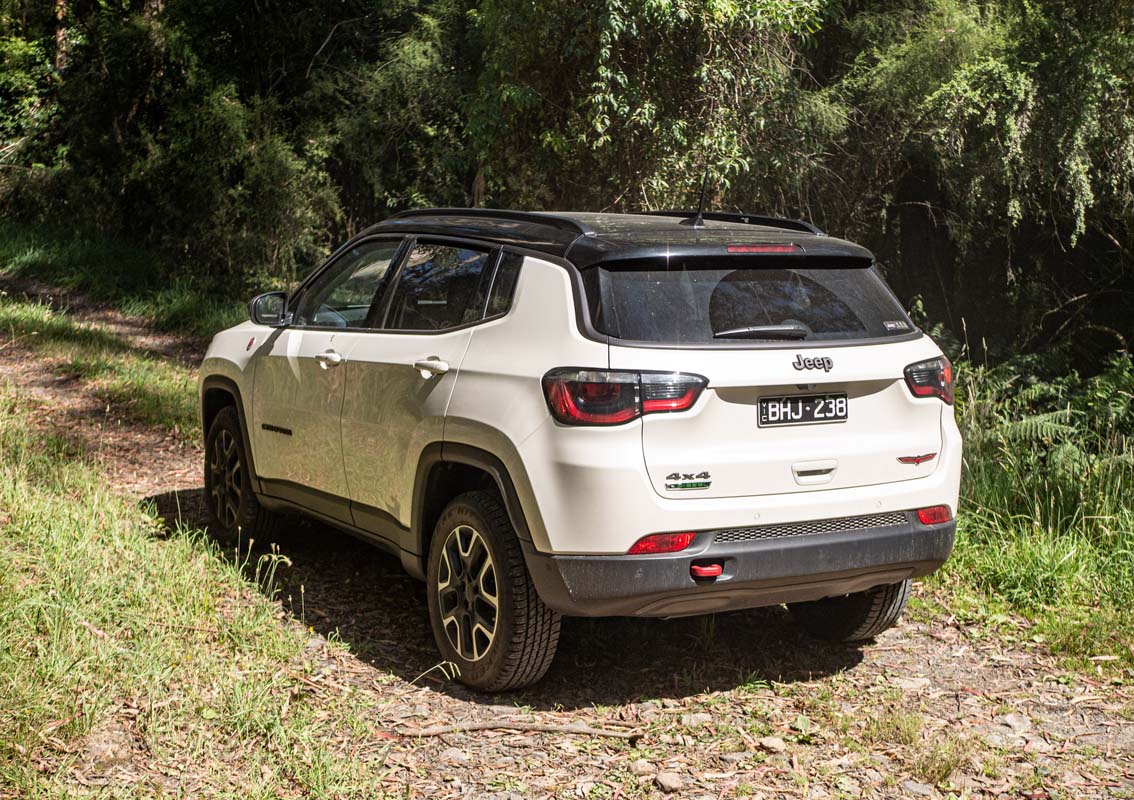 There’s little bodyroll through corners and the grip is impressive on both bitumen and well-graded dirt with the all-wheel drive system quick to activate the rear end (the Compass Trailhawk, like the other Compass 4×4 variants, is an on-demand all-wheel drive). 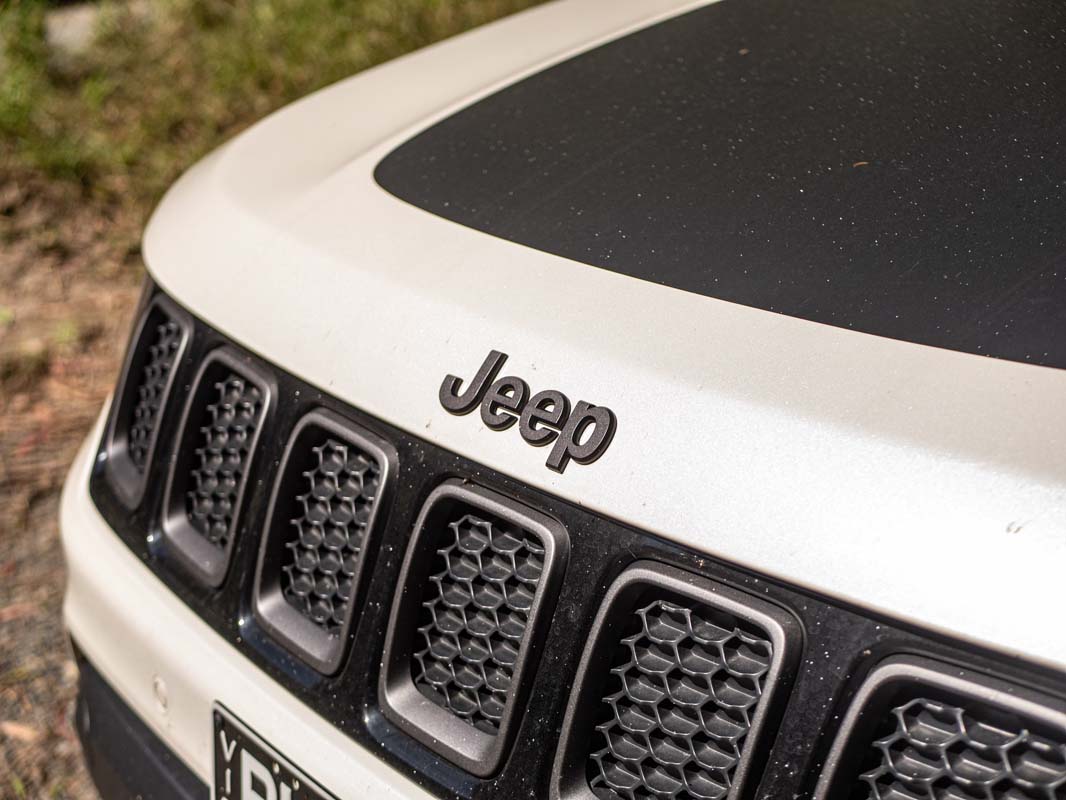 What’s it like off the road?Across our off-road loop, the Limited 4×4 would have struggled to traverse the terrain we put the Trailhawk across, simply because of clearance and the approach angle (we still managed to rub the underside of the nose when angling across the ditch you see in the pictures). The Trailhawk gets a more angled snout which increases the approach angle from 16.8-degrees on the Limited to 30.8-degrees. Break-over and departure angles are also different, because of the additional clearance. 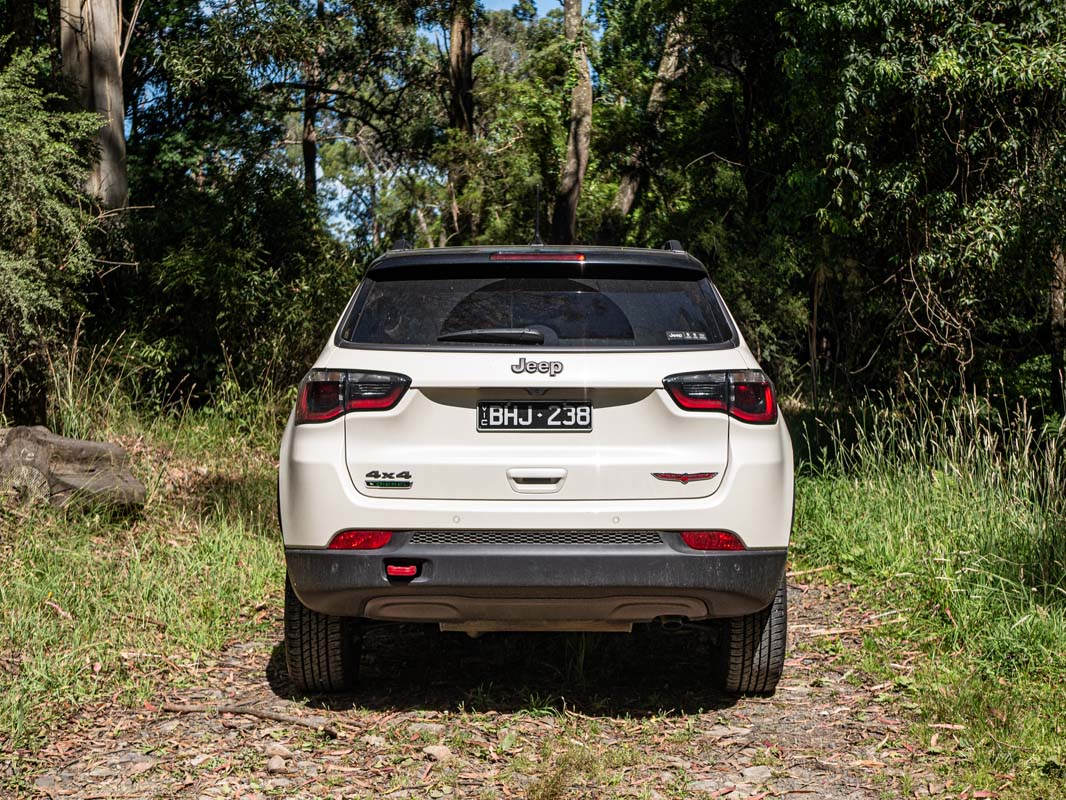 The Compass Trailhawk is, 90% of the time, a front-wheel drive vehicle when left in Auto Mode. This is great when cruising along the highway as it means you’re saving fuel but, at the same time, it takes the system a while to work out what it’s doing on rougher terrain and can even leave you stranded when left in Auto. 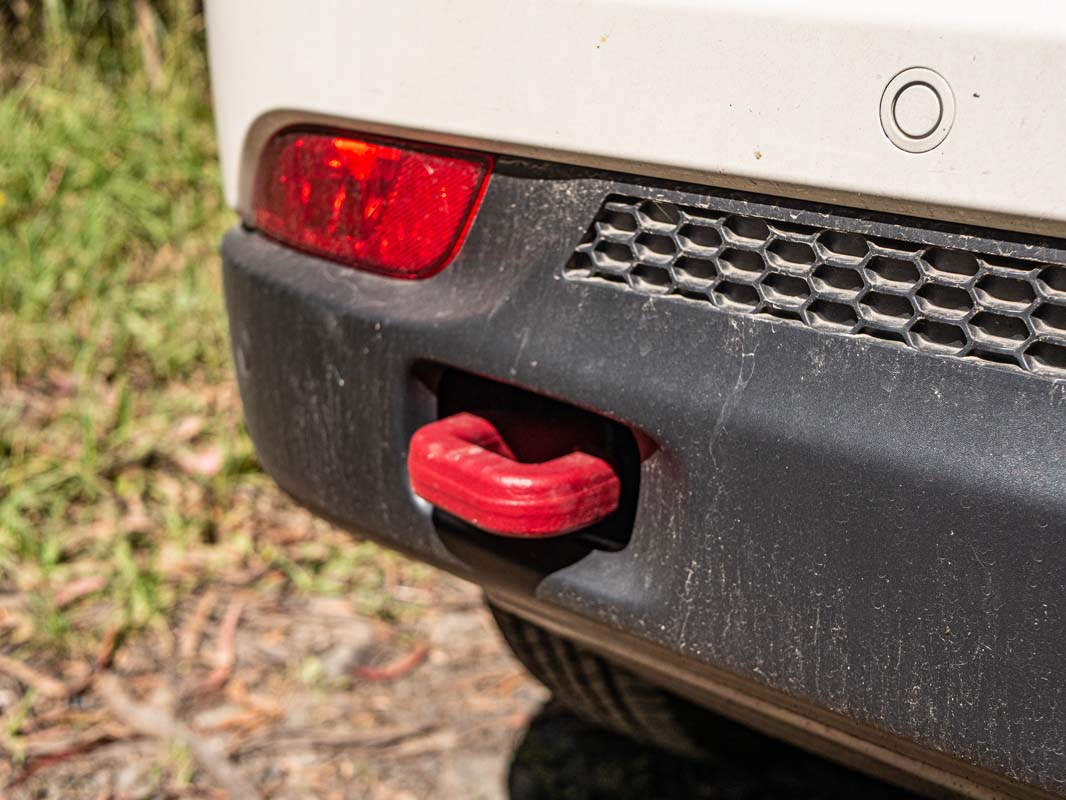 There’s very little suspension droop (Jeep claims 20cm of articulation) and so the Compass Trailhawk will pick up a wheel very quickly and easily, so the trick is to really concentrate on your line when off-road with the Compass and, obviously, where possible keep all four wheels on the ground. Progress is just too slow if you’ve got to stick in 4WD Low and Rock Mode but if you’re careful with your lines and avoid anything where you’re picking up wheels, you won’t need to use it too often. That said, on slow-going, rough sections of track, absolutely select 4WD Low and Rock Mode…it’ll give you better traction and control if you’re lifting wheels. 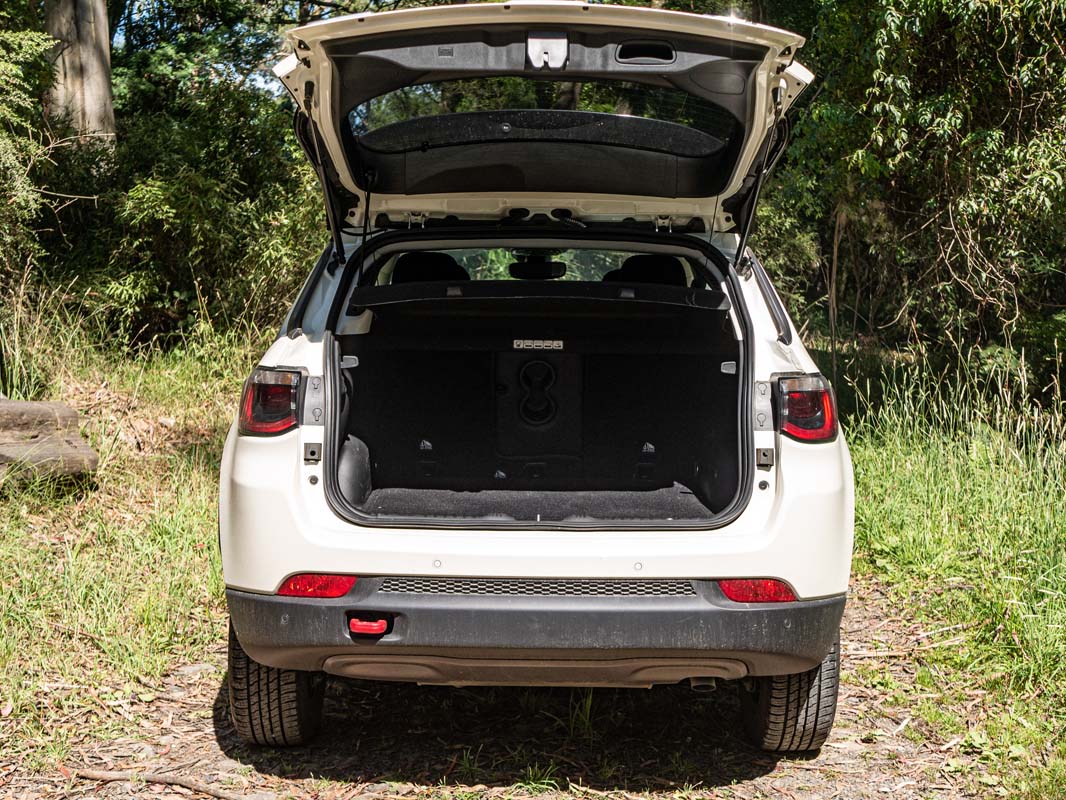 The firm suspension that affords such, perhaps out of place, cornering composure, really bites when you’re driving across rocky tracks with the vehicle bucking and bumping from side to side as you go from one rock to the next.

Despite its looks and badges, this thing isn’t a proper off-roader (don’t misunderstand me, this thing is easily one of the most capable non-low-range 4x4s on the market), but there’s not a single other compact SUV, at this price point, that will go as far off-road. 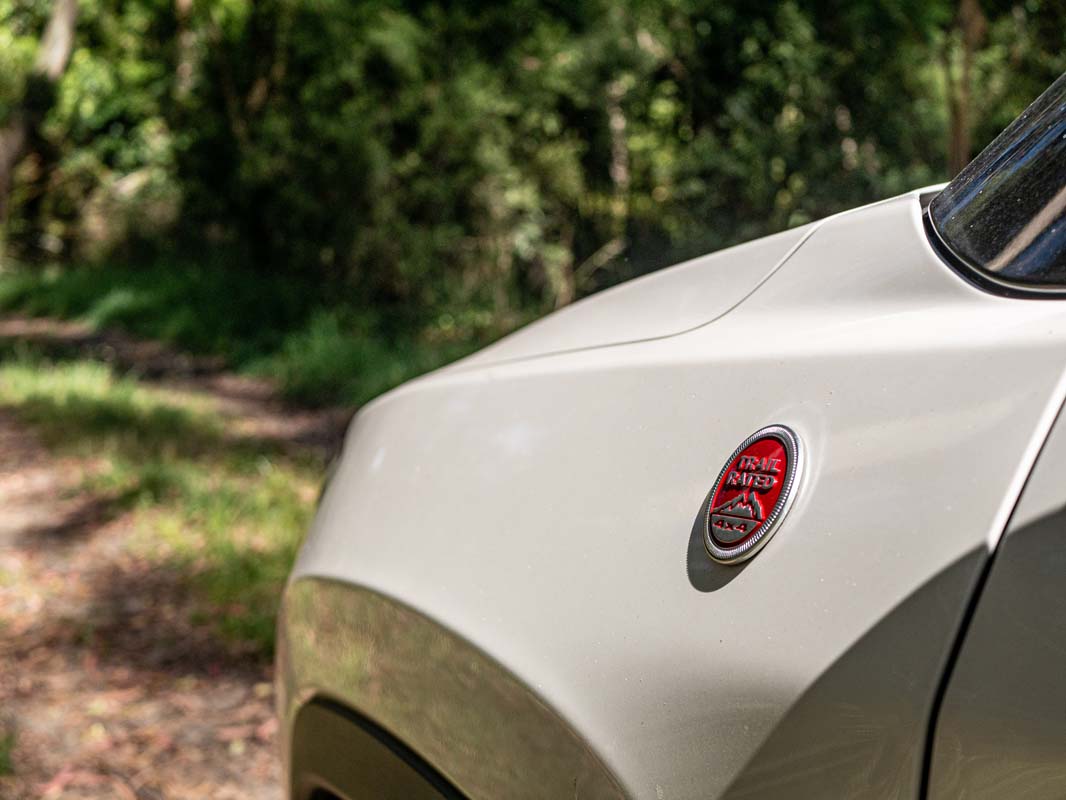 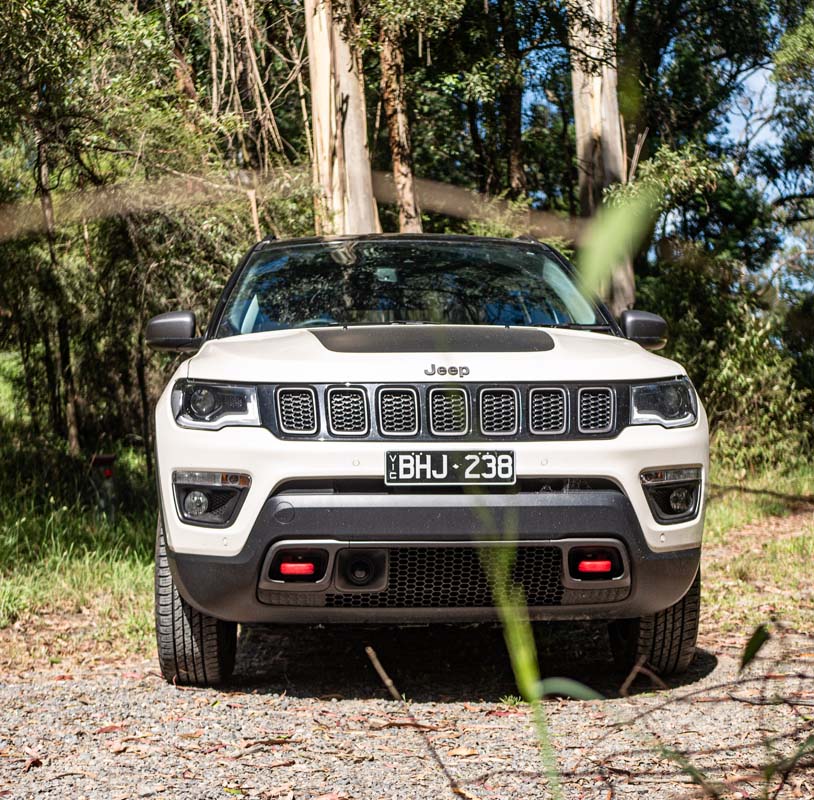 The Compass Trailhawk is one of the most rugged compact SUVs you can buy. It’s not a rock crawler but those wanting a little more grip when the going gets rough will find the Compass Trailhawk is capable enough of getting around in the rough stuff. The on-road ride and handling is firm but, on the right road this means it’s not a bad thing to punt…although that might be slightly missing the point of a family-oriented SUV. The boot isn’t huge, but the front and back seats will accommodate a family with more than enough creature comforts to keep them happy, and the infotainment system is easily one of the best you’ll find on any car and at any price.