Cheaper than ever, the new manual-equipped Amarok V6 brings the German powerhouse ute to under $50k.

Little More than 12 months ago Volkswagen unleashed its cut-price Amarok Core V6, offering one of the dual-cab ute market’s gruntiest options for a touch over $50,000. And we say it’s the gruntiest option now given that Mercedes-Benz has pulled its X-Class offering – the only V6 rival to the Amarok – almost as quickly as it introduced it.

That’s great news for VW, which claims almost 90 per cent of Amarok buyers opt for the V6 over the 2.0-litre four-pot. That number might creep even higher with the introduction of this new Amarok Core V6 manual, bringing an even more affordable price, a manual transmission only the 2.0L previously offered, and a flexible non-permanent four-wheel drive system which the auto doesn’t have. 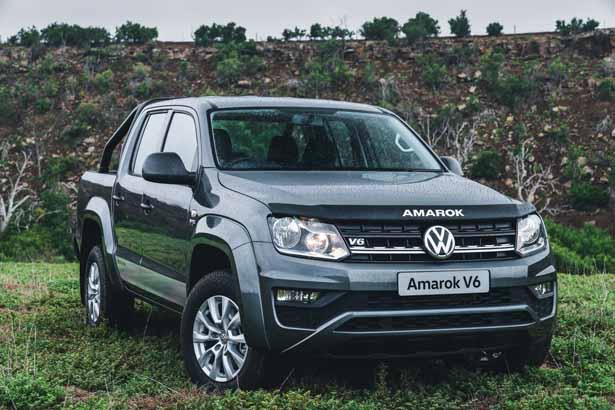 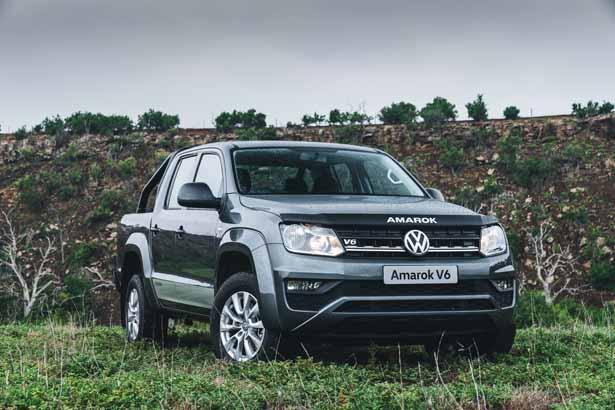 What does it cost and what do you get?

The Amarok V6 Core 4×4 manual costs $49,950 plus on-road costs, or you can opt for the Core Enduro which adds $1200 worth of kit – a black styling bar, bonnet protector and decals – for no additional cost. Yes, the decals are optional.

Being the stripped-back Core model there’s not much in the way of premium cabin additions like that found in the upper-grade Amaroks. But you can expect a blend of practical functionality – like rubber floors that are easy to wash out – and the same nice design and ergonomics the Amarok has offered for years. The steering wheel is a nice leather-wrapped item with multi-function buttons for the infotainment too.

Overall, you get the sense that this is a hard-wearing interior, ready to handle tradies walking off a boggy worksite or a family escaping a wet camping expedition in the bush. Our testing was just after torrential rain in Melbourne, and the fact we didn’t have to worry about messing up a carpet-lined cabin made hoping in and out that much easier. You do miss out on some features in the Core that other models carry, like dual-zone climate control and a 12v charging port in the tub. 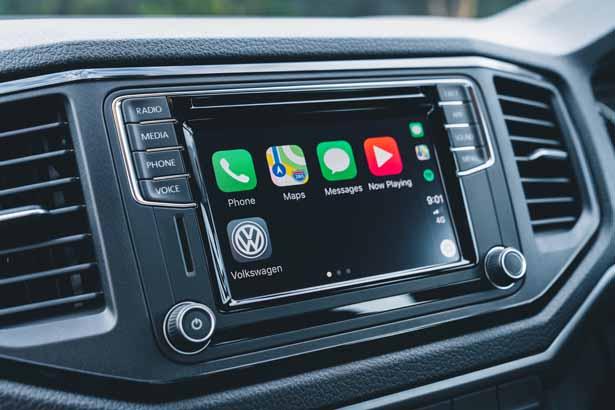 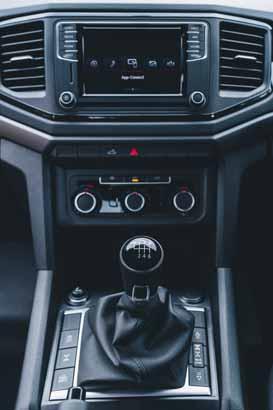 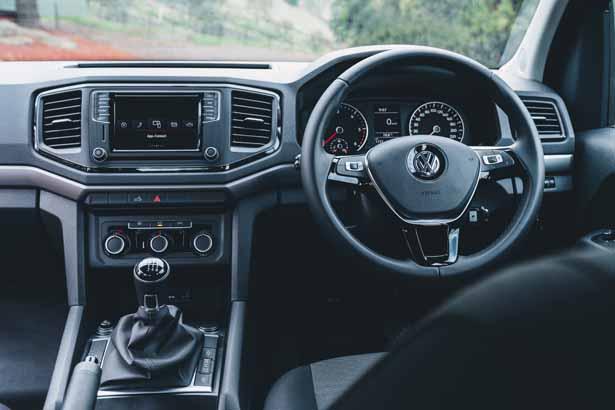 It’s a roomy cabin front and rear, with wide shoulder room that eases squishiness on the rear seat. That back pew is also a little higher, providing good vision all-round.

Upfront the seats are fabric-trimmed and comfortable, with manual controls on both the steering wheel and seat which provides the driver with a good amount adjustment for finding the right seating position. And vision forward is good, particularly over the bonnet when off-roading. As far as cabin storage, the centre console bin is big, the door pockets large and even the glovebox a good size.

In the back is the Amarok’s familiar styleside tub which measures 1555mm long and 1620mm wide internally – big enough for a full-size pallet.

The infotainment screen measures 6.3-inches, which is smaller than most new screens at around 8.0-inches. But it’s bright, crisp, vibrant and really easy to read in direct sunlight. It also has the latest Apple CarPlay and Android Auto which brings sat-nav and many Apple and Google apps which can be mirrored onto the screen. 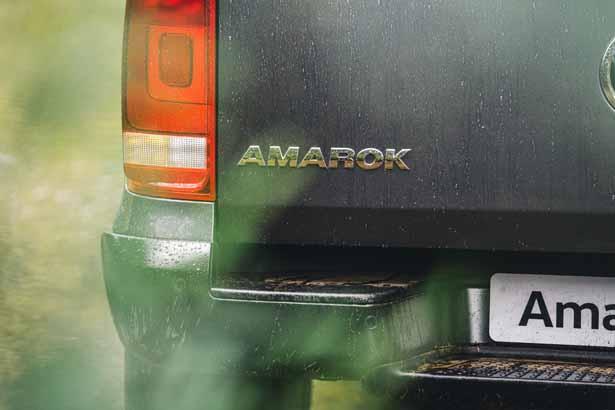 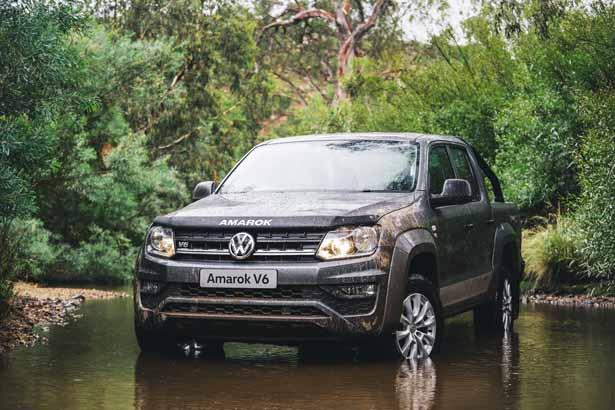 While there’s a sea of four-pot diesels in the market a 3.0-litre turbo diesel V6 is the Amarok’s calling card, and a good one, given its silky smooth with tremendous pulling power.

But mated to the six-speed manual transmission as the lesser-powered 2.0-litre diesel four-pot model, torque has been reduced to 500Nm at 1250-3000rpm rather than the usual 550Nm and 580Nm found in models with the eight-speed ZF automatic. Power is 165kW at 3250-4500rpm and 180kW on temporary overboost.

All are good numbers still, and real-world it feels less stressed than the dual-cab market’s most powerful four-cylinder oilers like the Ford Ranger’s bi-turbo 2.0-litre which develops 157kW and an equal 500Nm. 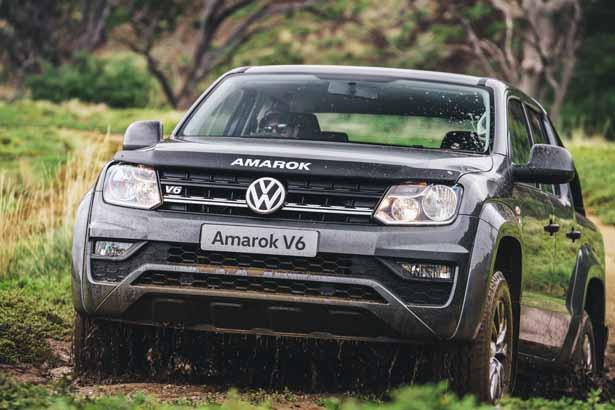 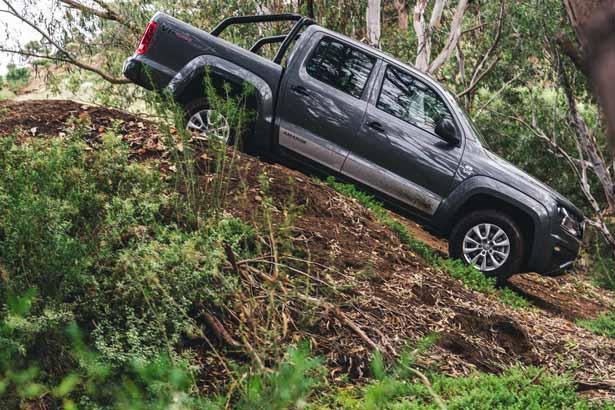 If you’re thinking that the manual will be agricultural compared the eight-speed automatic, you’ll be surprised behind the wheel. It’s absolutely easy to get along with and the action in the manual’s gate is smooth, matched to a predictable clutch that bites progressively but late in the pedal swing. On the highway there’s plenty of herbs and you can skid the rear wheels if you’re cavalier with the throttle.

And that’s the main point of difference compared to the auto: the manual V6 Amarok doesn’t have full-time four-wheel drive, meaning the thing drives in rear-wheel drive until you hit a button to move the dual-range gearbox into four-high or four-low. You’ll do that off-road, of course, and there’s also an off-road mode button that you press to change settings for traction control and ESP, so the computer can better figure out where it needs traction and supply accordingly. Hill descent control will also automatically engage with off-road mode on, and it works seamlessly – start a descent and the car will maintain whatever speed you select by braking or accelerating, crawling in either first, second or third in either high or low gear.

There are rear and centre diff locks which change how the off-road mode operates and was best displayed in abilities while our lead guide attempted to drive through Werribee 4×4’s slightly less extreme replica of Gunshot Creek. Given it was full of water and the Amaroks were riding on highway-biased all-terrain tyres, it started slipping and sliding around about halfway up as expected; low speed the diff locks are great for scrambling, but some momentum was now needed to escape the pit. So, with the centre diff off, which gave the off-road mode computer more control over managing slip via electronics, it made it out pretty easily.

We also experienced driving up and down 45-degree slopes in wet conditions, across rivers, through knee-high mud that absolutely butchered the tyre tread, and on a rally track, which really only highlighted that rear-drive V6 manual can be fun. But in all instances, we never felt out of depth in the standard Core V6 manual, which can be said of all Amarok V6s. There is plenty of torque for when you need and enough power to work through difficult crossings.

Now where the model fails to match some competitors is towing, which is 3.0-tonne braked and not 3.5-tonne. We didn’t tow with it so we can’t comment on its abilities here, though past result with the automatic has been positive. Payload is a proper one-tonne though, and VW’s new factory-backed Amarok modifications can raise braked-tow capacity.

How safe is it?

The Amarok carries an archaic five-star ANCAP rating from 2011, and like most dual-cab utes it’s an old rating that wouldn’t hold up with current testing criteria, but which itself has been a constantly moving set of goalposts.

Of note, the Amarok comes with driver and passenger front and side airbags but not rear-seat airbags, two ISOfix compatible seats in the back, trailer sway stability control, active roll-over prevention, rear parking sensors, reversing camera and fog lights. It doesn’t have AEB which is in the Ford Ranger and Toyota HiLux.

Can anything else touch it?

You might be able to grab a V6 dual-cab from Mercedes-Benz which has axed its X-Class and need to move stock, but they don’t come with a manual and are a sight more expensive. If we’re looking at price pairs the options are entry to mid-grade, V6-less versions of the Holden Colorado (and that’s been axed too), Isuzu D-Max, Ford Ranger with the older 3.2L five-cylinder diesel, Mazda BT-50, Nissan Navara, Mitsubishi Triton and Toyota HiLux. 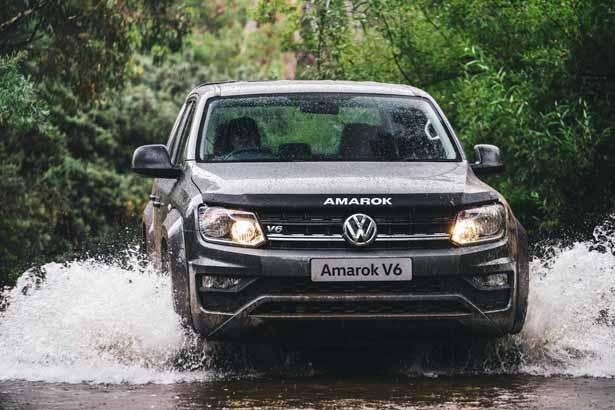 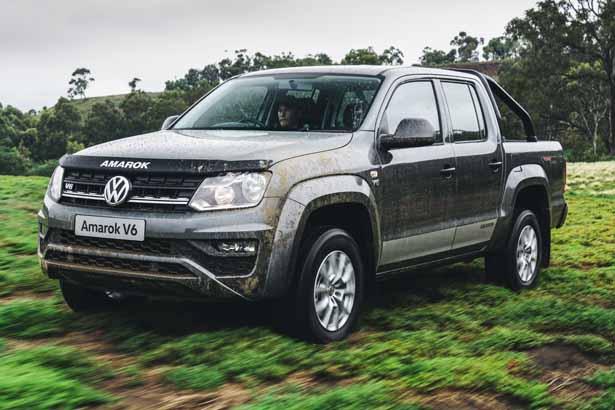 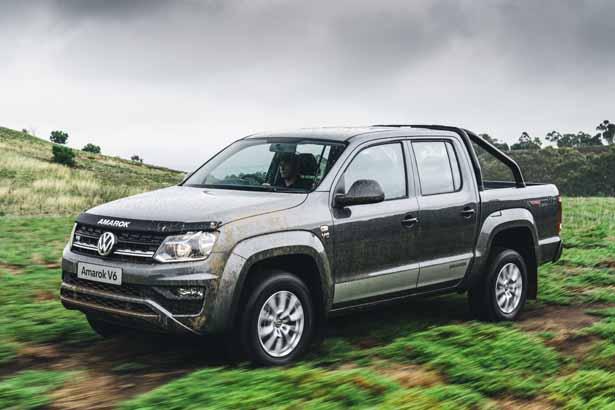