At one point in time nearly every SUV on the road was a boring jacked-up replacement for the good ole family wagon. Nowadays there are sports utility vehicles that live up to the name in both practicality and ability. This one even more so on the ability side of things. 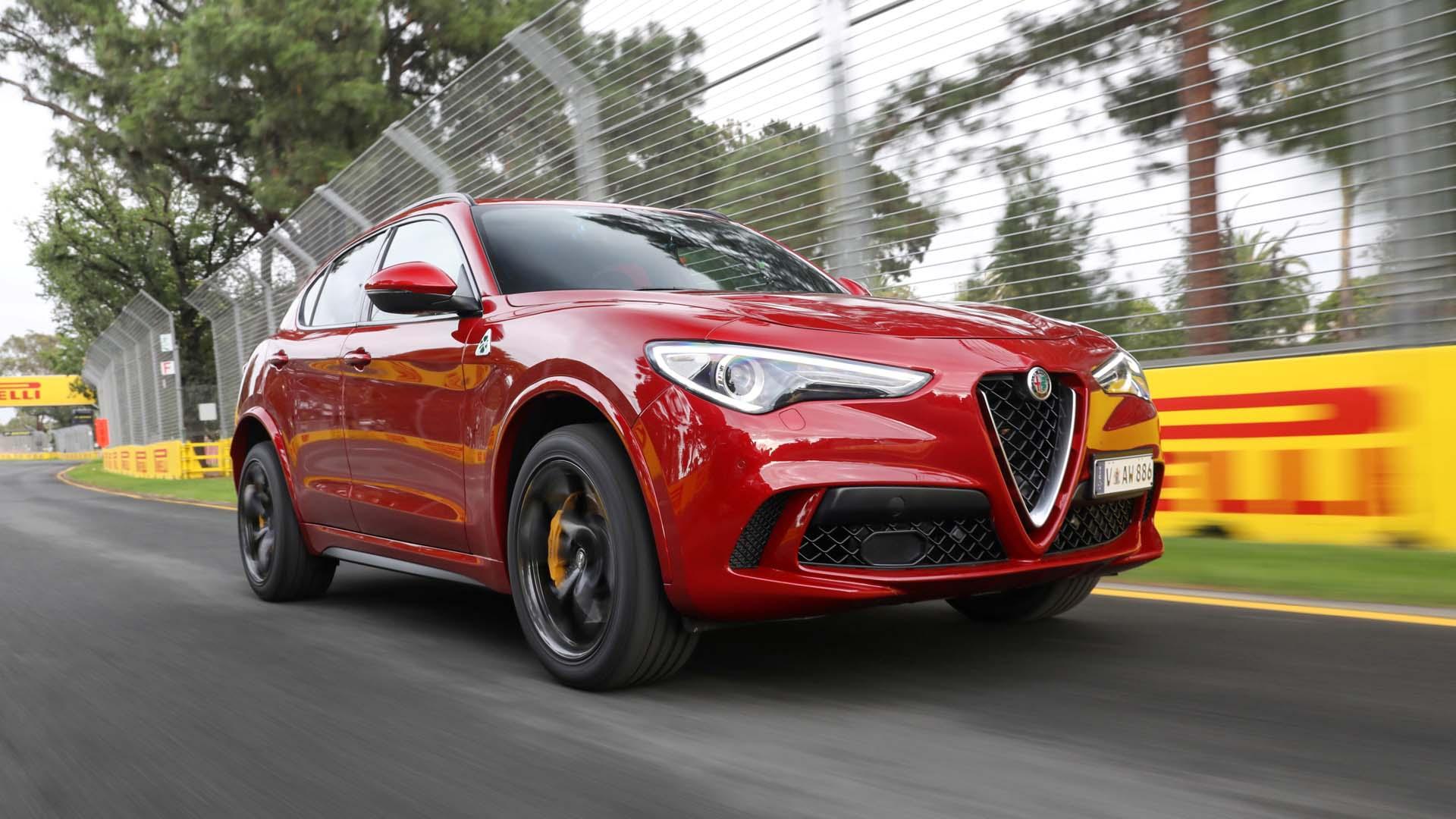 High-performance SUVs are the hottest ticket for car makers these days – especially in Australia. So when Alfa Romeo needed to add a long-overdue SUV to its line-up, naturally the Italian brand with the rich motor racing heritage built a high-performance one – the Stelvio Q.

Part of Alfa Romeo’s attempted comeback, the Stelvio Q combines the space and practicality of a BMW X3/Audi Q5-rivaling mid-size SUV with the hot rod powertrain of the Giulia Quadrifoglio sports sedan. The results is an SUV just at home on a racetrack as it is taking the kids to school… perhaps more so. 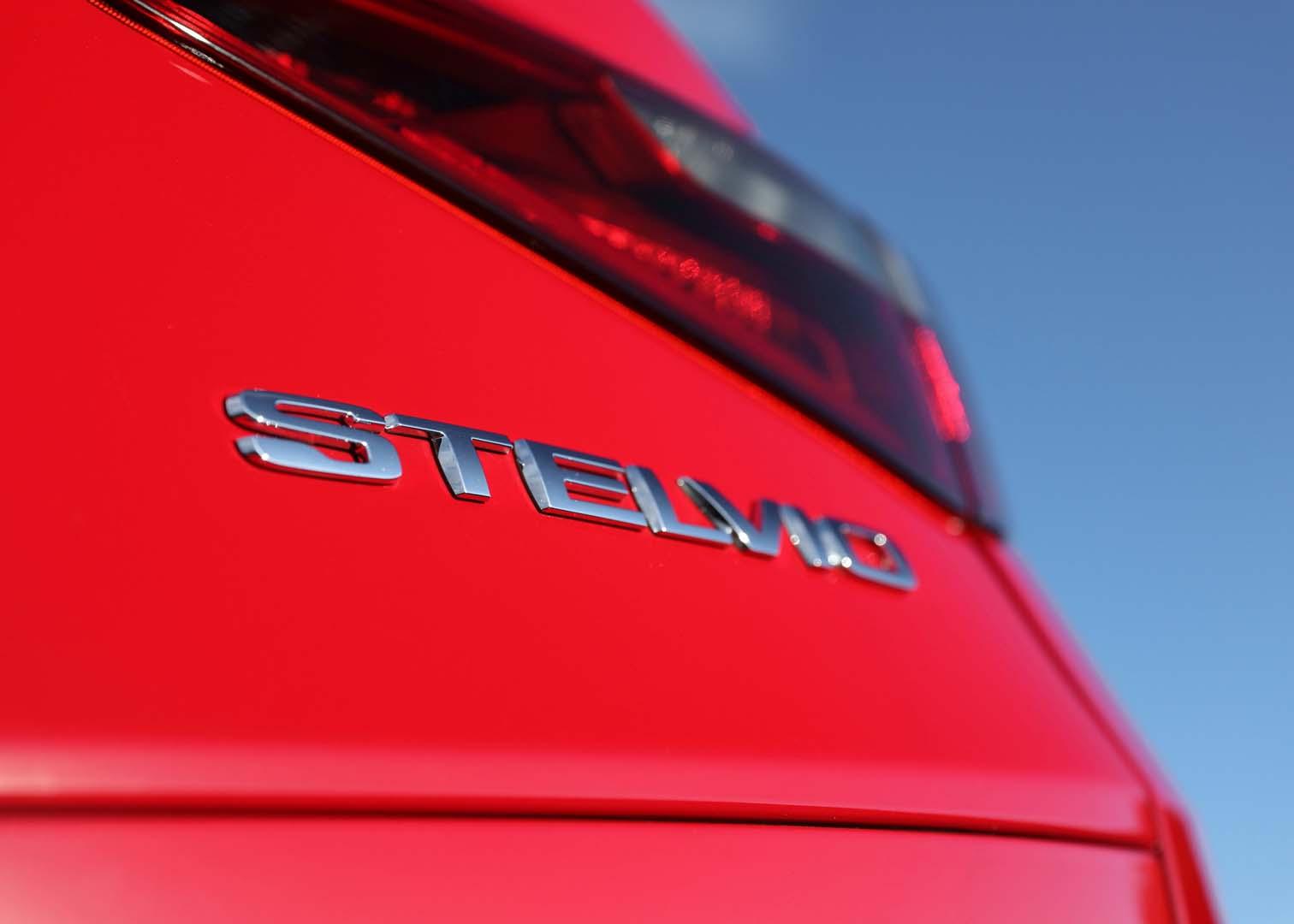 What’s it cost and what do you get?

In a sign of how far things have changed in the last decade, not only is Alfa Romeo offering an SUV but you can fit carbon ceramic brakes (once the sole domain of supercars) – as long as you want to spend an extra $12,000. Other options include $700 for black or yellow-painted brake calipers (red is standard), dual-pane sunroof ($2000), metallic paint ($1300) and tri-coat paint ($3500). 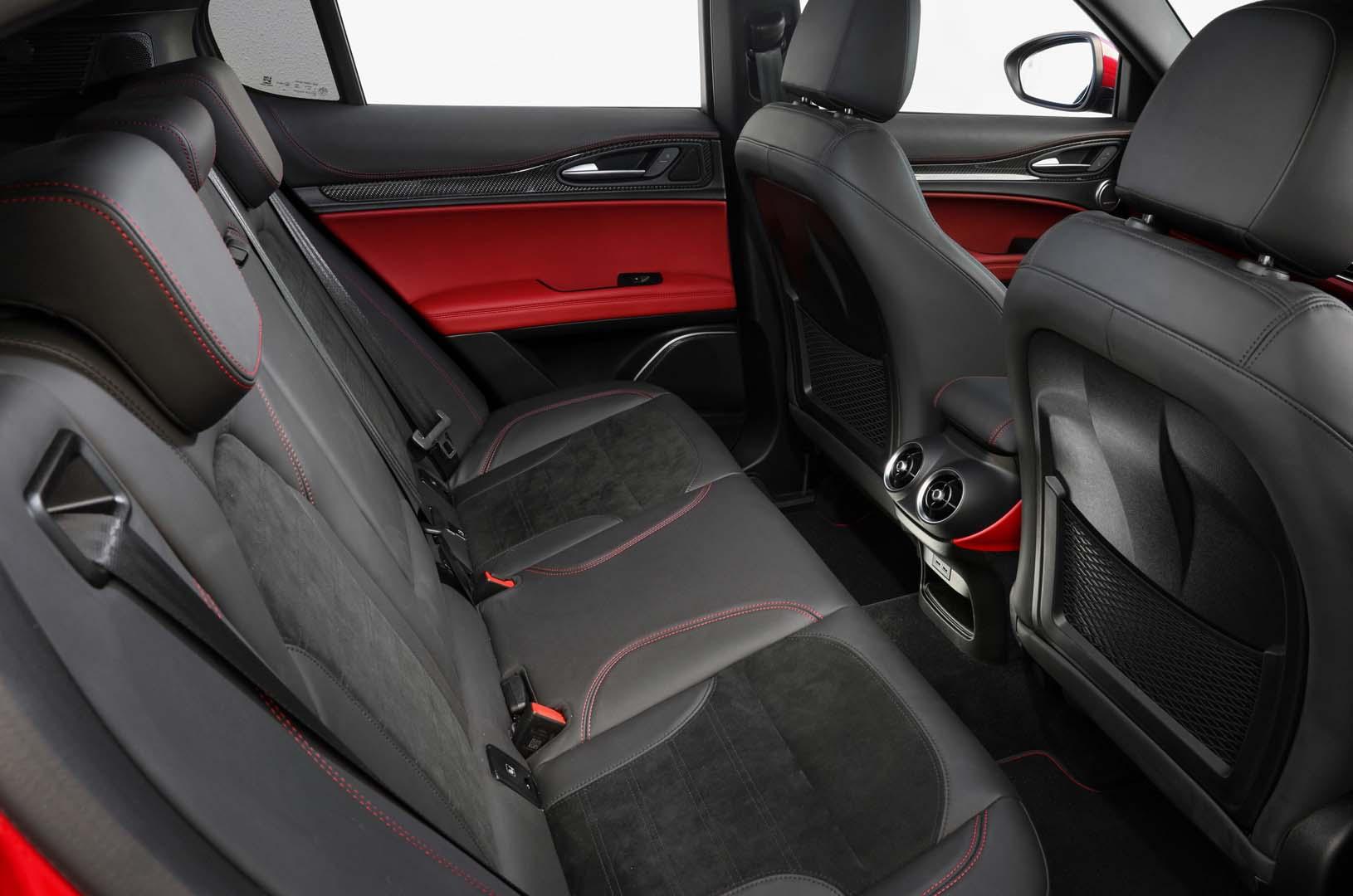 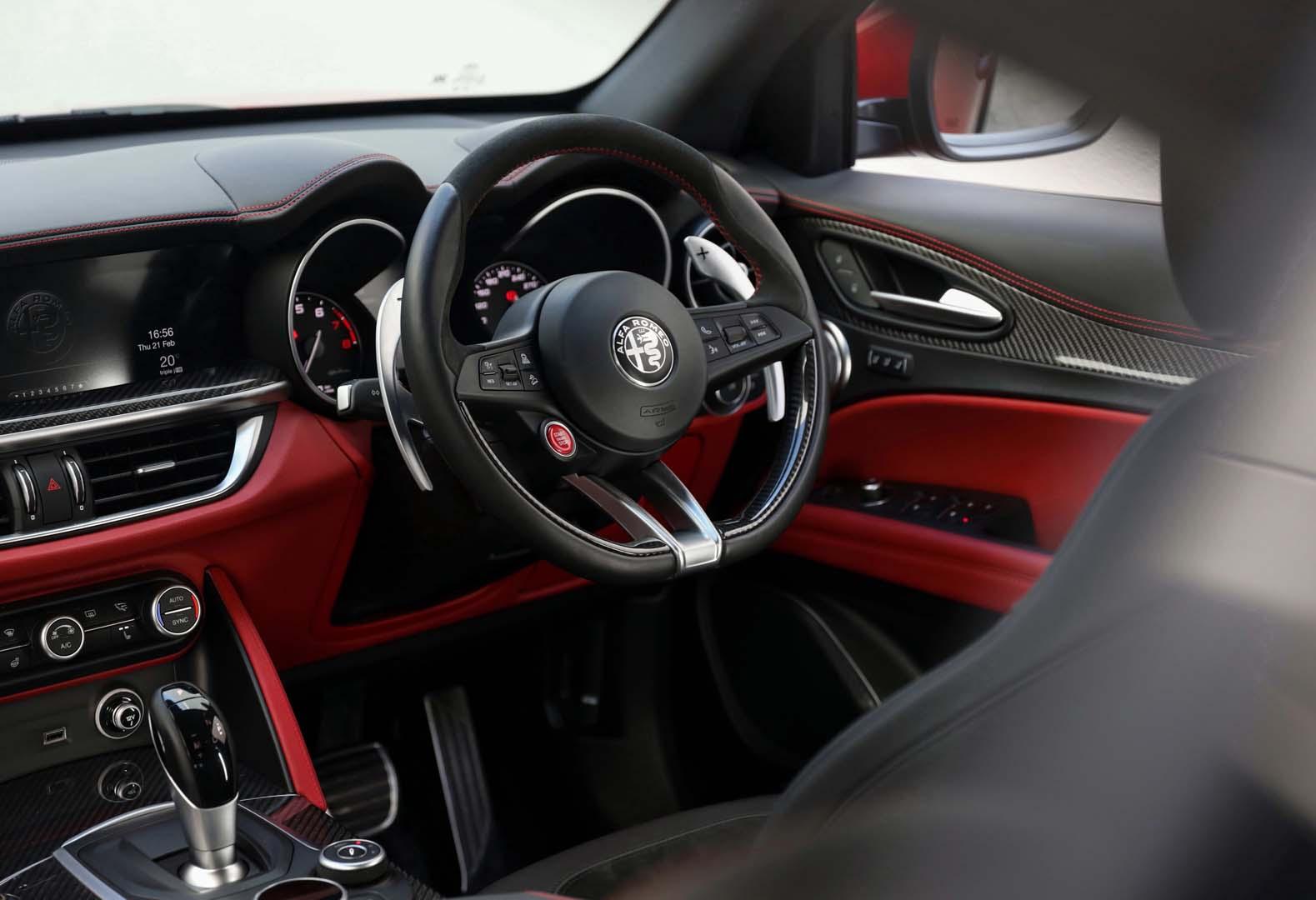 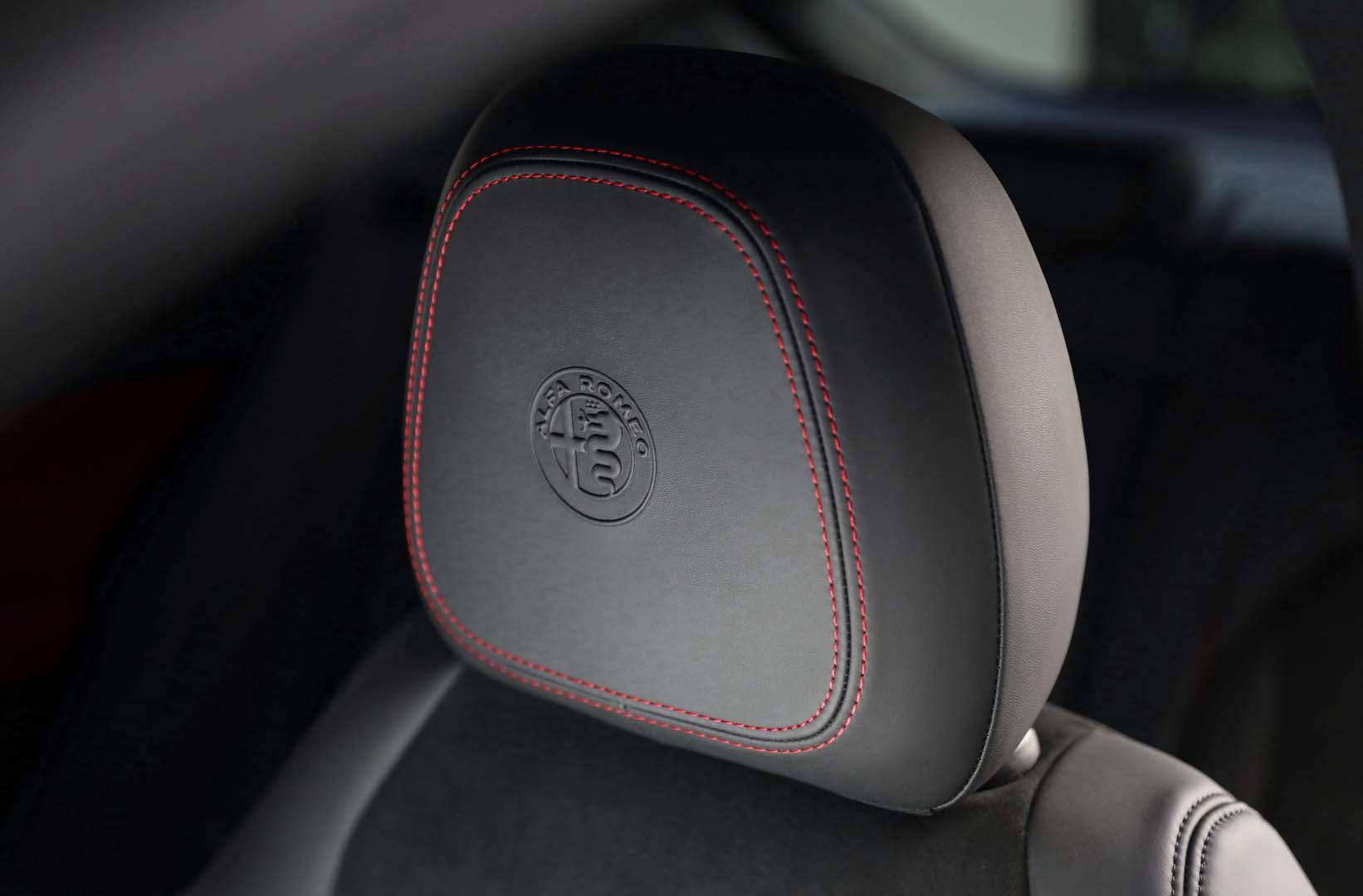 More sports car than SUV in places. There’s plenty of Alcantara and carbon fibre trim to get you feeling like you’re in something that means business. Although, having said that, climbing in was a bit of a challenge in our test car, as it was fitted with the optional Sparco carbon fibre seats ($5000). They have high sides which can be a bit tricky to climb in and out of but once you’re in they feel great and offer the kind of support you expect from a racing-style bucket.

Our test car also had the optional thick-rimmed wheel, complete with a bright red starter button and carbon inserts, as well as the standard huge silver paddle-shifters. Combined with the dark tones of the upholstery our up-specced test car looked purposeful. 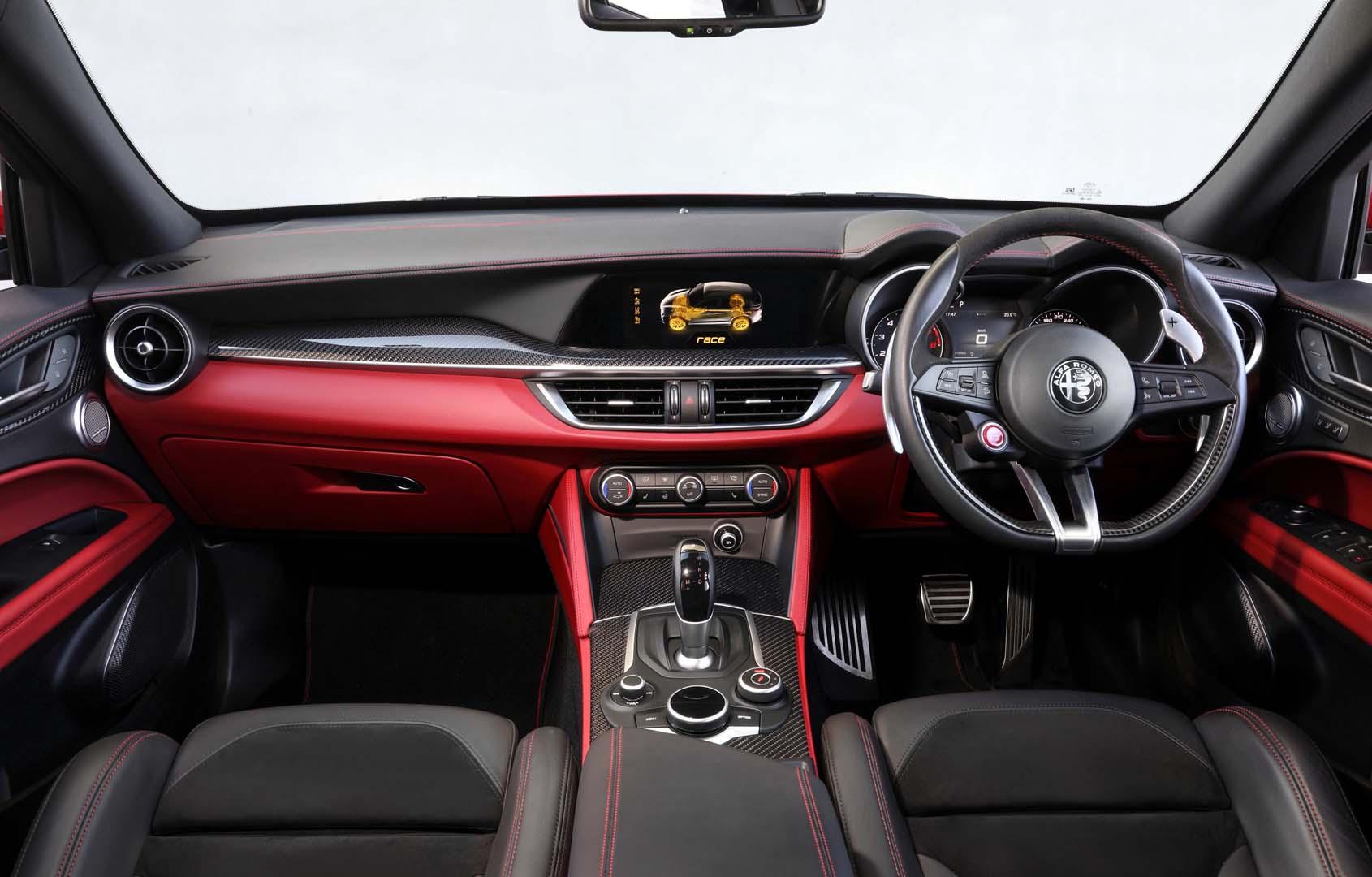 How much space is there?

It may be sporty but it offers up the kind of space you expect from a mid-size SUV. While those up the front feel like they’re in a sports car, the rear seats are more practical and offer good comfort and support. There’s decent legroom for an SUV this size so it will take three kids or two adults in relative comfort.

The boot measures 525-litres, which is slightly smaller than its German rivals (the BMW and AMG both have 550L) but it will suit most family’s typical needs.

This generation of modern sports SUVs can’t just be fast, they also need to be luxurious and family-friendly. The Stelvio Q comes with a 14-speaker Harmon/Kardon premium sound system that incorporates digital radio, Android Auto and Apple CarPlay and an 8.8-inch infotainment screen with navigation.

There are also plenty of tech ports spread around the cabin – three USB in the front plus one AUX-in and a 12-volt outlet with two more USBs in the back. 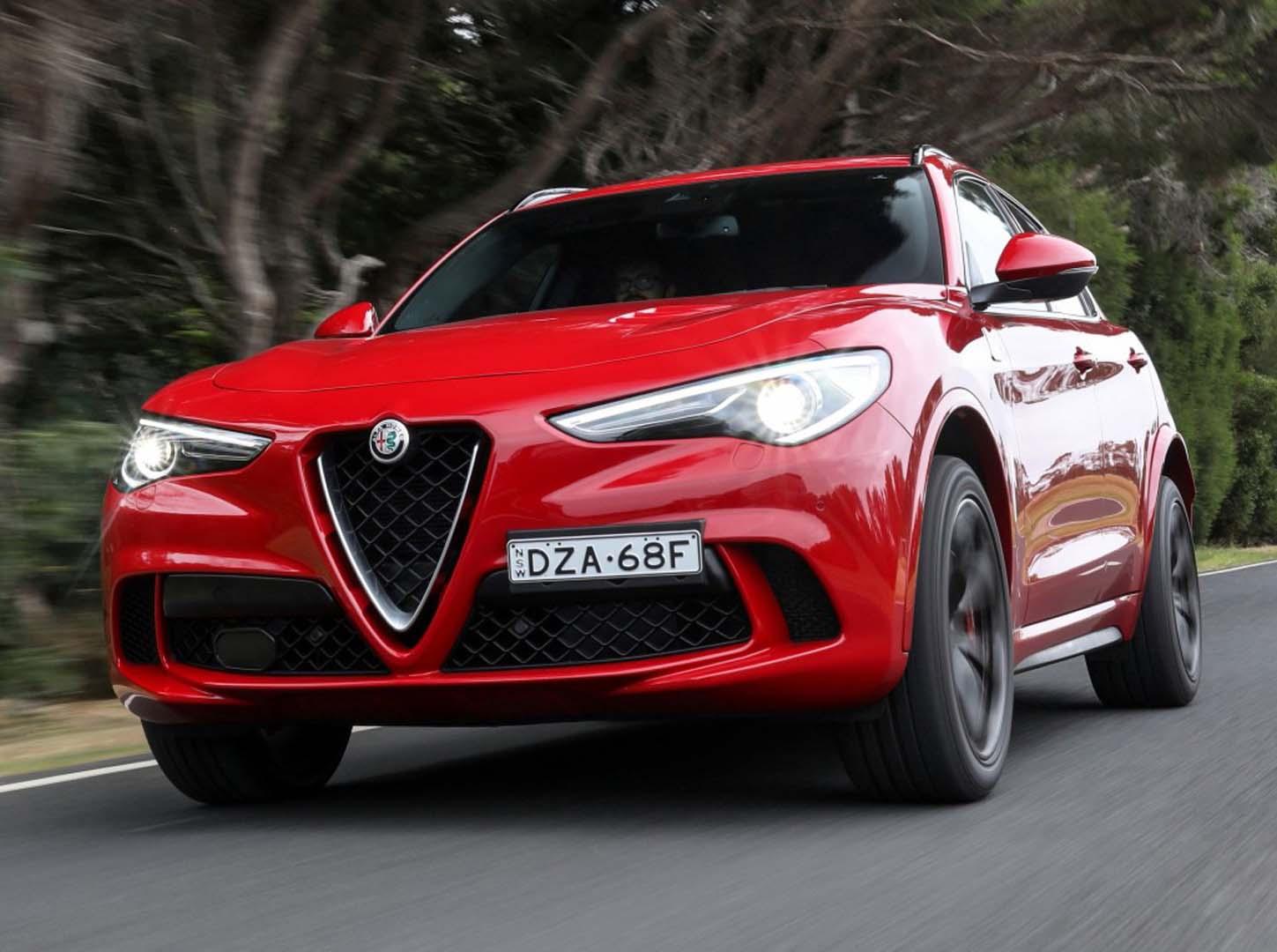 This is where the Ferrari connection enters the picture. The 2.9-litre twin-turbo V6 petrol engine is based on the same architecture as Ferrari’s family of all-aluminium twin-turbo V8 family; as used in the Portofino, GTC4Lusso and 488 GTB and Spider.

In this smaller format, it still produces plenty of power and torque while also making a fantastic sound. The Alfa Romeo and Ferrari engineers have tuned the V6 to make 375kW and 600Nm – which is the same power you get in the BMW X3 M Competition and Mercedes-AMG GLC63 S, but the AMG has an extra 100Nm of torque.

Crucially Alfa Romeo has focused on power-to-weight, making the Stelvio Q as light as possible. It tips the scales at 1830kg, which is hardly featherweight but is 170kg lighter than the BMW and 180kg less than the AMG. To achieve that Alfa Romeo invested in technology not typically associated with SUVs, including a carbon fibre driveshaft as well as an aluminium bonnet, doors, wheel arches and suspension components.

That translates in a meaningful way on the road, where the Stelvio Q feels punchy and responsive when you put your foot down. The turbos spin up quickly and there’s strong pulling power from just 2000rpm and it stays steady all the way to 5000rpm, making for an impressive mid-range.

The eight-speed automatic does a good job of harnessing the power, offering smooth shifts when it controls itself and being sharp and responsive when you use the paddles. It’s worth noting that the paddles are mounted to the steering column rather than the wheel; it may be a big deal for some or a non-issue for others. 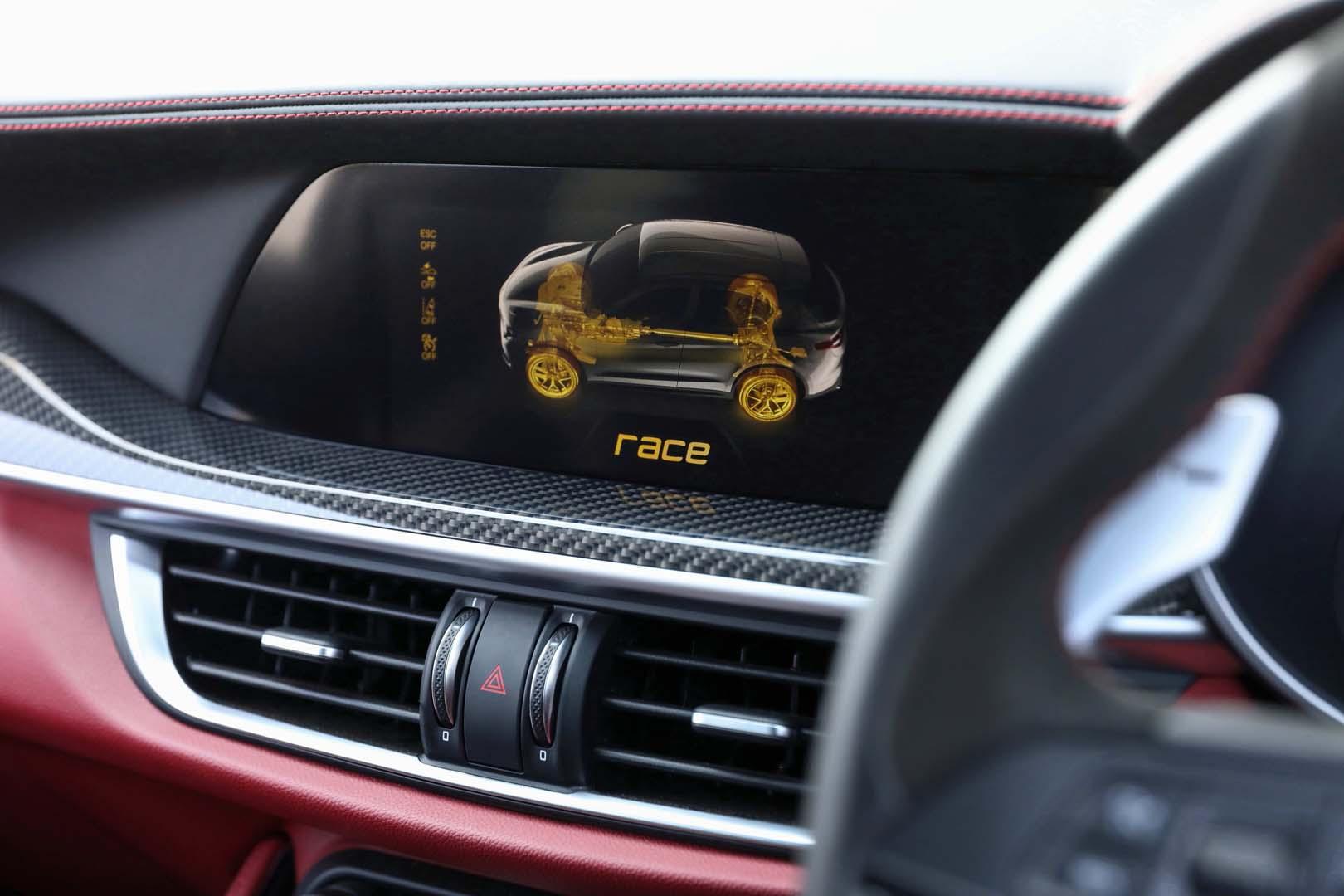 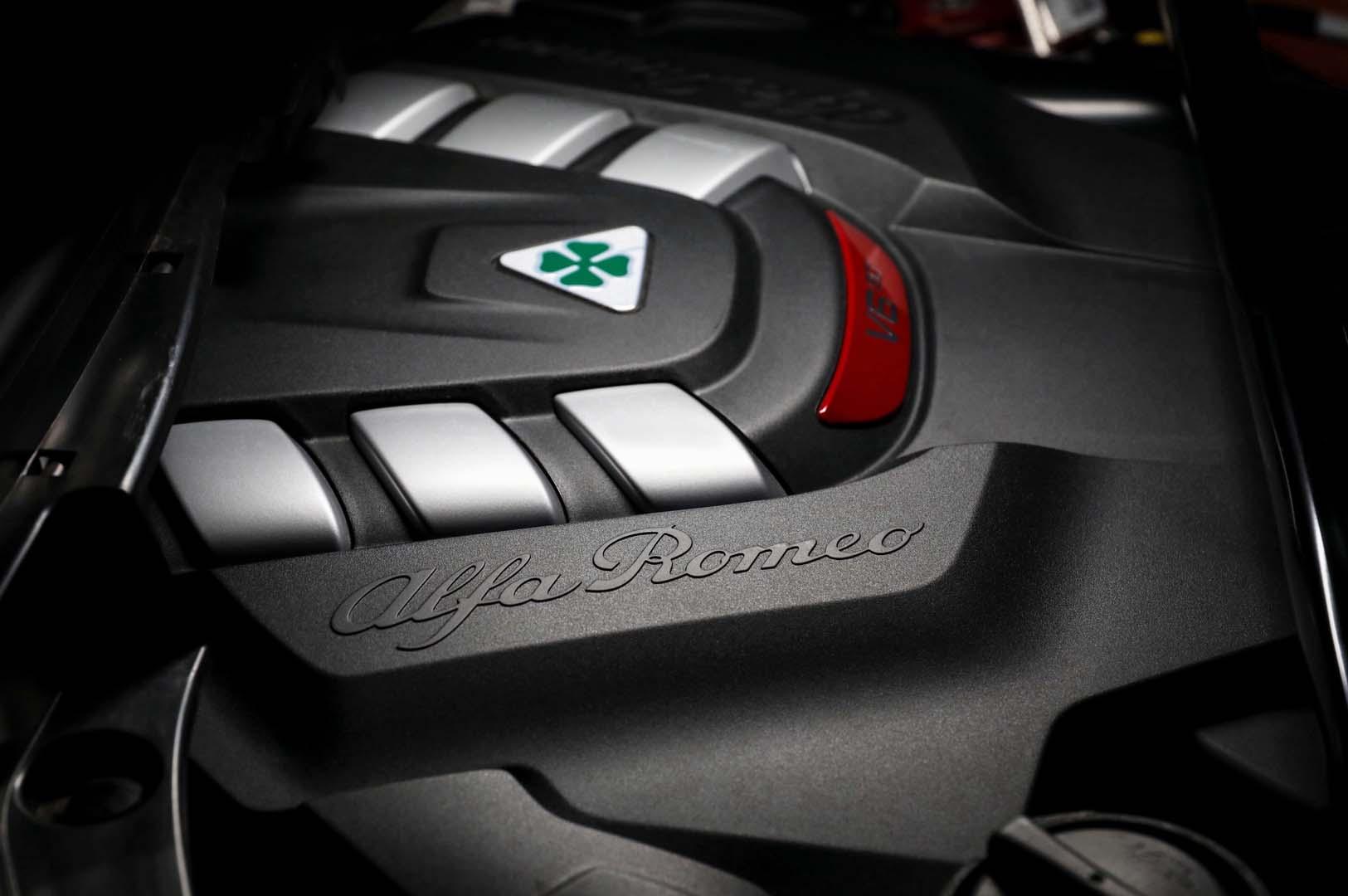 Is it good to drive?

The weight saving also helps the way the Stelvio handles itself on the road, but there’s also a range of other technology – adaptive dampers, the front suspension and steering include a unique system dubbed AlfaLink and torque vectoring. It all sounds complicated but what you need to know is it helps make the Stelvio Q feel sharper and more direct than your average SUV.

The steering is quick, faster than you find in some sports cars, so much so it does take a day or two to adjust to it seamlessly from regular SUVs. The combination of the trick suspension and torque vectoring means it will hang on tight when cornering and power out smoothly, even at high speed. It may seat five and ride higher off the ground but this is one of the sportiest and most dynamic SUVs on sale today and would give many sports sedans a run for their money.

The suspension is good but not perfect, despite the adaptive dampers the ride is quite firm even for a sporty SUV. The 20-inch alloys look nice but the low profile tyres don’t do much to absorb bumps, both large and small, so you need to be prepared to trade-off some comfort for the excellent handling. 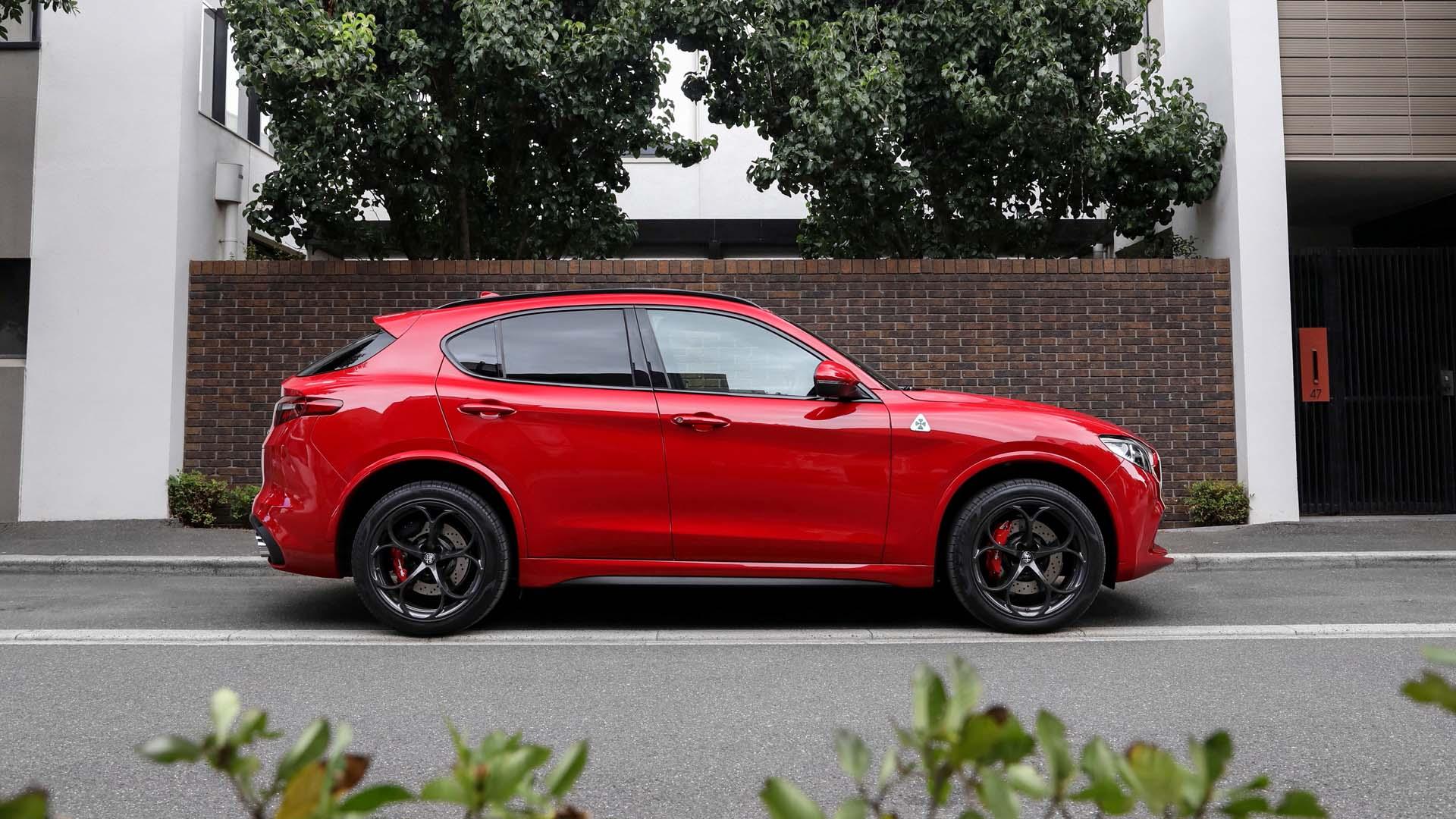 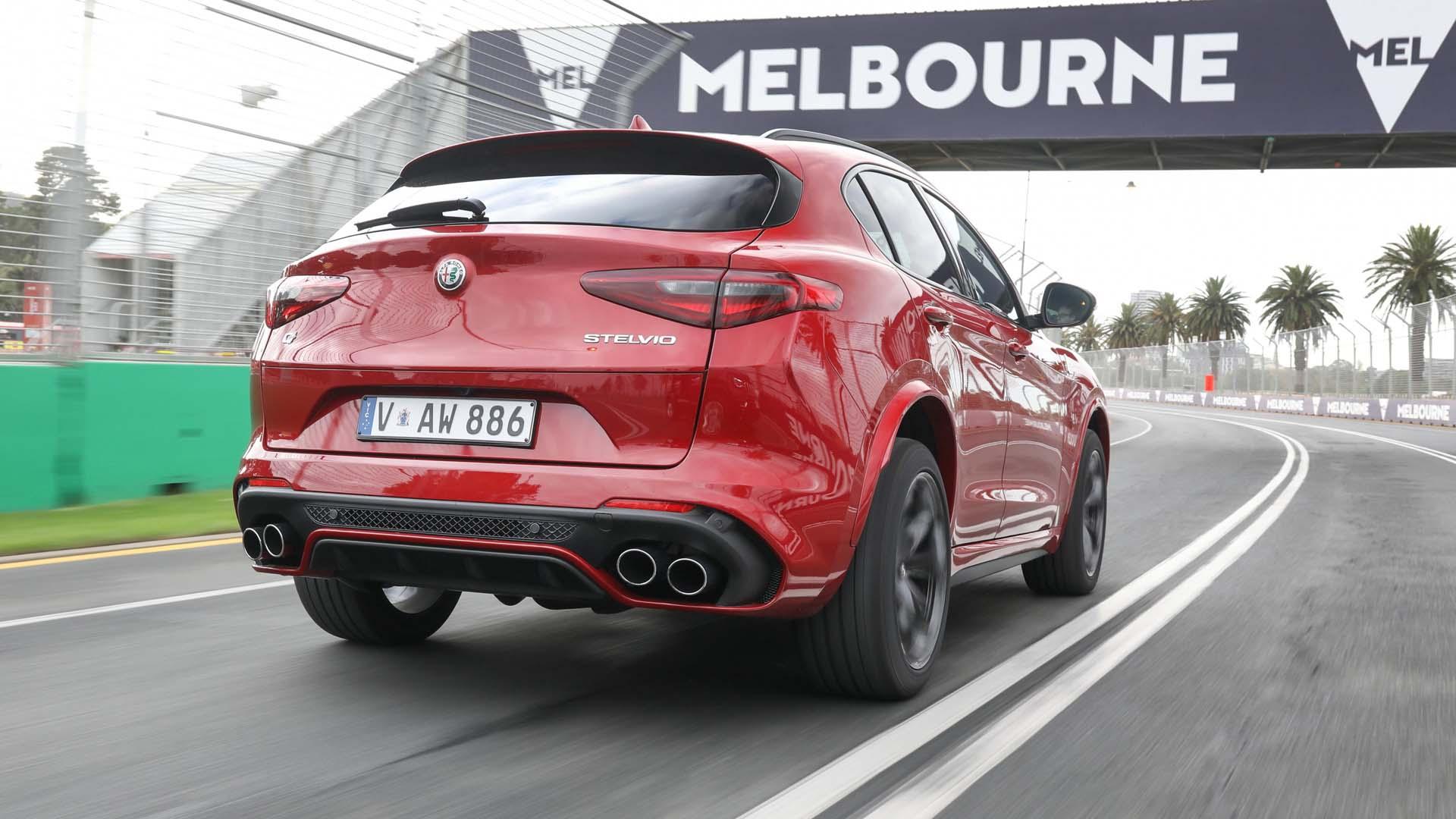 How safe is it?

Aside from the previously mentioned BMW X3 M Competition, Mercedes-AMG GLC63 S and Porsche Macan Turbo you could also add the Jaguar F-Pace SVR ($140,262), Land Rover Velar P550 SV Autobiography ($176,412) and BMW X4 M Competition ($164,900) to your short-list of performance SUVs. That’s quite an impressive array of options, which is hardly surprising given how popular hi-po SUVs are at present. 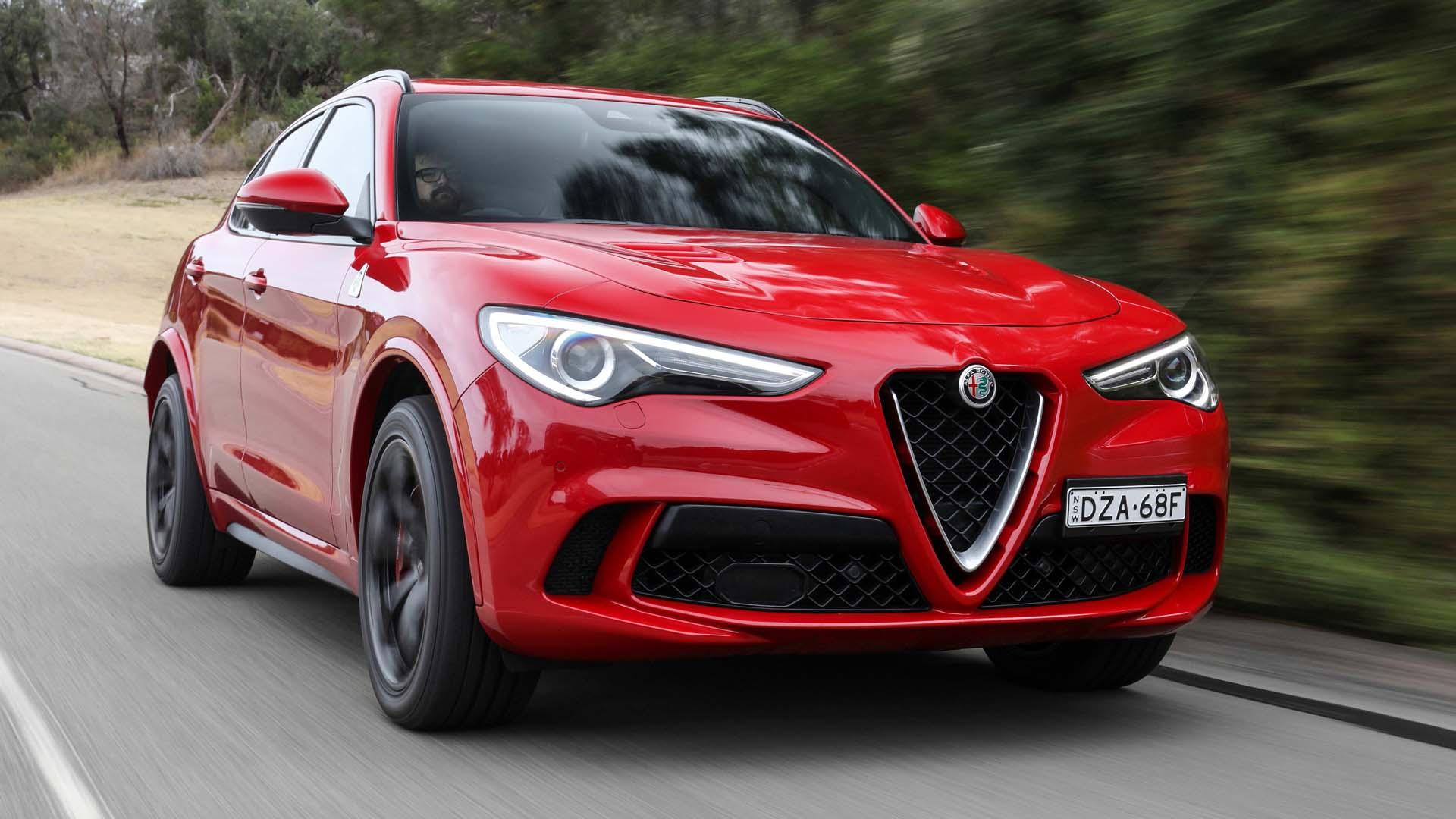 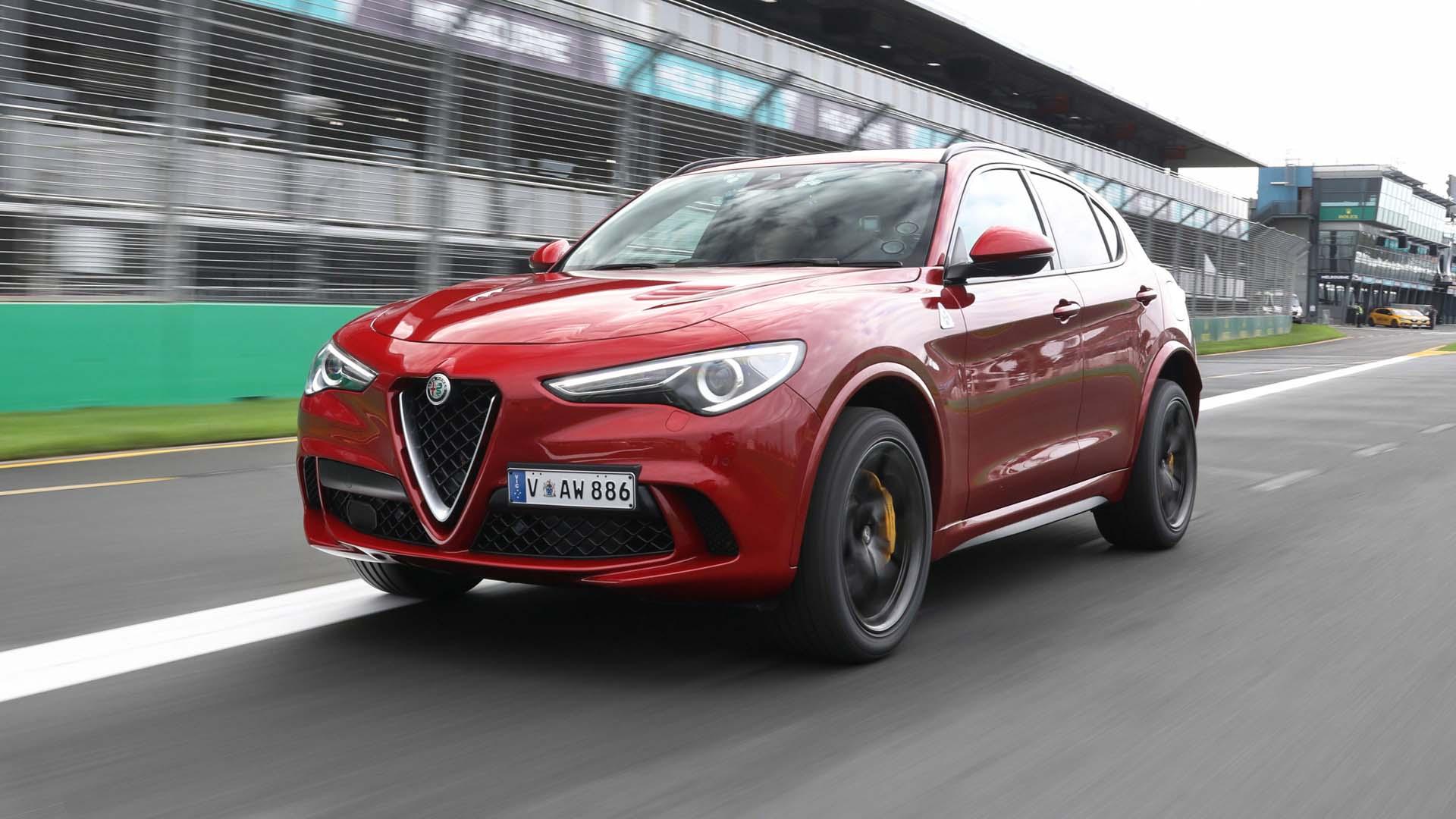