They had to do it in a different way, but Range Rovers still got together at Goodwood this year to mark the model’s 50th Anniversary.

In 2018, the Goodwood Festival of Speed in the UK celebrated the 70th Anniversary of the Land Rover with a display of seventy new and old Land Rovers that drove in convoy up the event’s famous hill climb course.

This year marks the 50th Anniversary of the Range Rover, so once again, a selection of new, old and rare vehicles gathered at Goodwood to mark the occasion, but this time, they did it in a different way…

Thanks to COVID, there was no Revival and no Festival of Speed this year, but Goodwood would not be denied, so the mecca for all things motoring and motorsport presented a more than adequate substitute in the form of Goodwood SpeedWeek, which was held on 16 – 18 October.

While COVID-19 restrictions meant the SpeedWeek couldn’t welcome spectators, live streaming the event online ensured millions of petrolheads still got to see the spectacle. As the SpeedWeek combined many elements from the historically-themed Goodwood Revival and the modern car showcase that is the Goodwood Festival of Speed, it was really a “best of” from both events, with circuit racing, drifting, parades, supercar presentations, a collector car auction and timed shootout laps, as well as virtual racing for those that couldn’t take part in person.

Fifty for the 50th

On 15 October, a day before the SpeedWeek officially got underway, a selection of 50 Range Rovers and their owners gathered to mark the luxury off-roader’s Golden Anniversary.

The all-Rangie array ran a parade lap of the Goodwood Motor Circuit as you’d expect, but later, the  vehicles gathered at a nearby paddock to create a giant ‘50’, viewable from the air.

Driving Wizards, a UK company specialising in choreographing racing and stunt driving sequences for movies, TV and special events, co-ordinated the display, which would see vehicles in the ‘0’ of the number continue driving in a circle while the other Range Rovers formed up to create the ‘5’.

Sounds simple enough, but without their usual roster of professional drivers – all of the vehicles were being driven by their owners – Driving Wizards had something of a challenge on their hands!

With a drone assessing the accuracy of the ‘50’ from up on high, the gathering took a few goes (including some out-of-the-vehicle rehearsals on foot), but the drivers eventually got the automotive ballet sorted out.

In both the parade lap and ‘50’ aerial formation, the full five-decade spread of Range Rover production was covered, from a 1969 pre-production chassis used to test and assess the Range Rover’s off-road performance to an example of this year’s ‘Fifty’ limited edition. 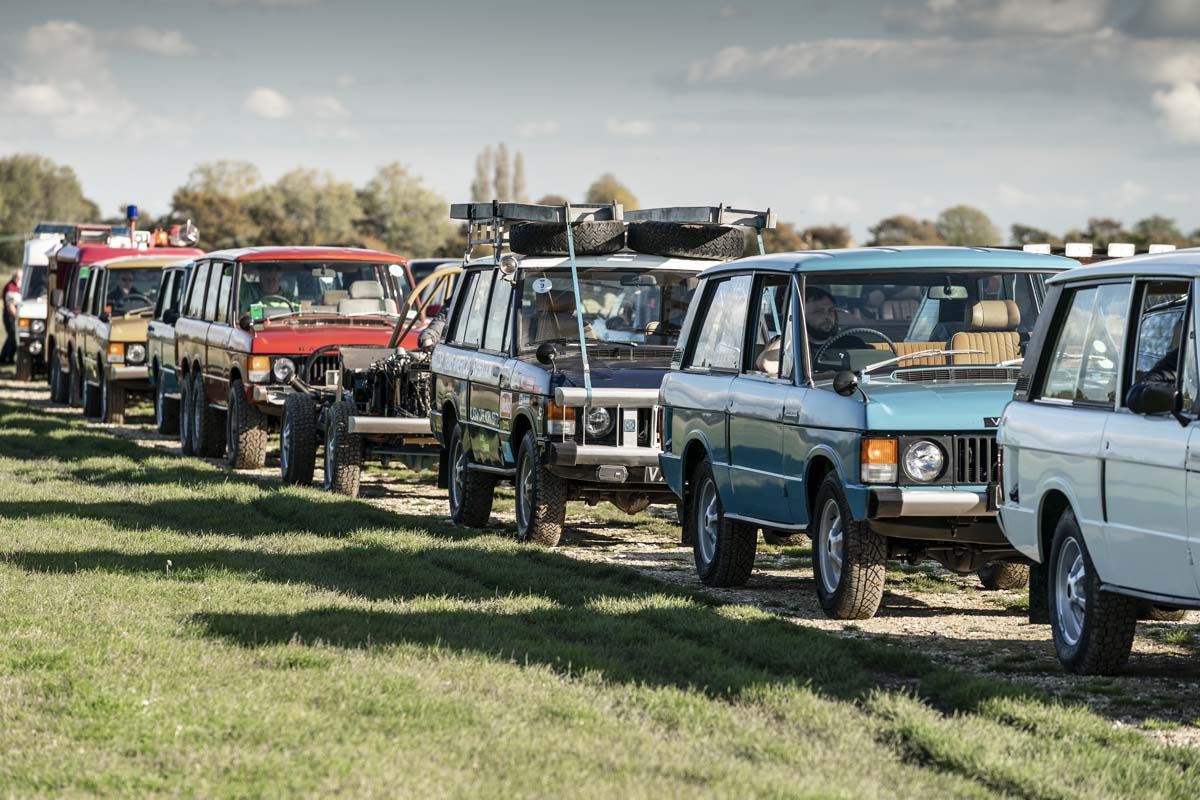 While the early Range Rover was well represented (including the ‘Velar’ prototype and the first production model), all four generations – Classic, P38, L322 and L405 - were part of the day, including Sport, Vogue, Autobiography and SVR variants within those generations.

Also amongst the 50 were Range Rover police vehicles, ambulances and fire tenders, stretched limousine, convertible and six-wheel drive conversions. Rarities and one-offs included the ‘Beaver Bullet’ speed record car, a Bowler racer, former Dakar rally and Camel Trophy entries and one of the vehicles used on the Trans-Americas 'Darien Gap' expedition in 1971.

Rawdon Glover, Jaguar Land Rover UK Managing Director said: “As we continue to celebrate Range Rover’s 50th Anniversary throughout 2020, it has been a pleasure to remind ourselves not only of some of the extraordinary forms that the Range Rover has taken over the years, but also the people and stories behind them.

“Of course, the gathering was aptly marked by the debut of the new Range Rover Fifty limited edition which epitomises the design, luxury and capability Range Rover stands for today.

“I would personally like to express my thanks to the owners and collectors who contributed to the event, helping us celebrate this significant milestone in Range Rover’s heritage.”