Nasser Al-Attiyah and Matthieu Baumel were victorious in the car division of this year’s Dakar Rally. And while the victory looked easy on paper – the Toyota Gazoo Racing pair led the general classification throughout – it was far from a cakewalk. 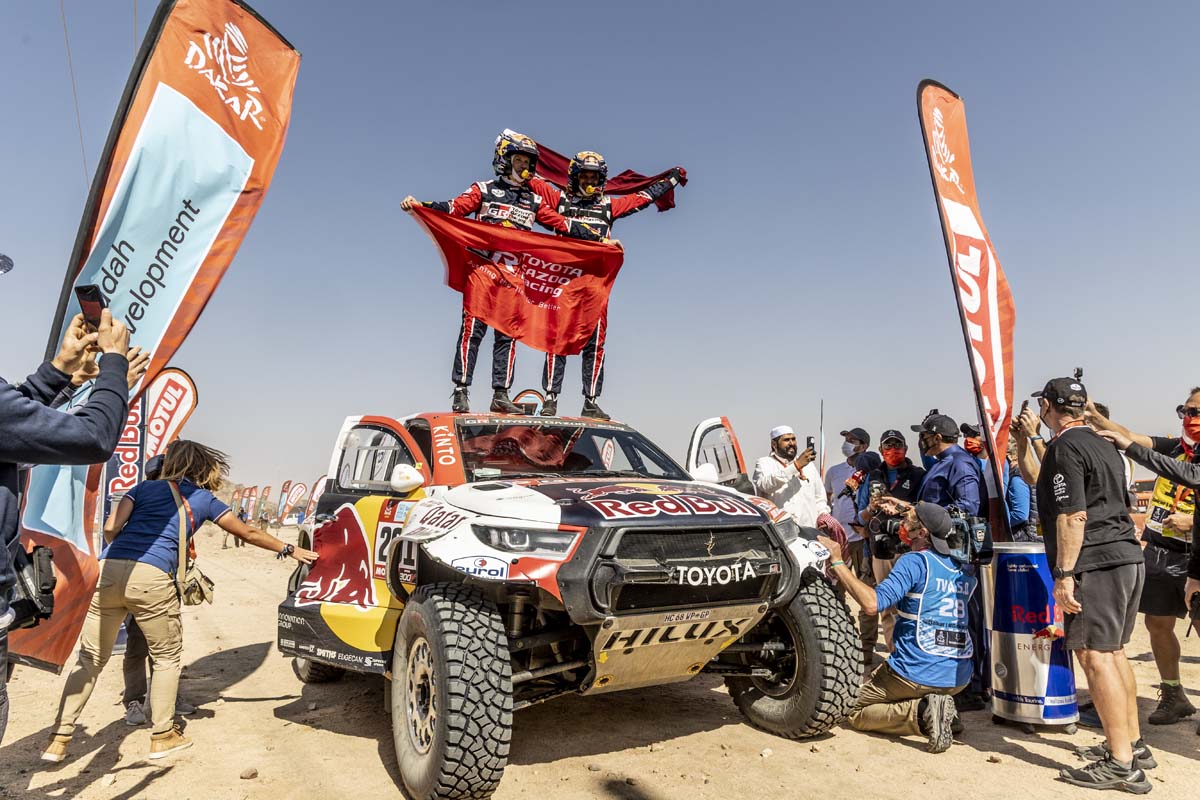 Runner-up in 2020 and 2021, Al-Attiyah came to this year’s Dakar with greater confidence of a victory, thanks to rule changes that benefitted the Toyota GR DKR Hiluxes developed by Gazoo Racing. The new ‘T1+’ category aimed to level the playing field between vehicles like the HiLux and the X-Raid Mini and Peugeot 3008 DKR vehicles that have won four of the past five Dakars.

In an effort to ensure parity, T1+ allowed some key changes to the Toyotas, including the ability to run larger wheels and tyres, as well as add more suspension travel. The Toyotas also traded the previous 5.0-litre V8 for a 3.5-litre twin turbo V6 (the same engine that’s in the all-new 300 Series LandCruiser).

Alongside Al-Attiyah in a four-entry Toyota Gazoo Racing squad was Giniel de Villiers and Dennis Murphy, Henk Lategan and Brett Cummings, and Shameer Variawa and Danie Stassen. Also in the new HiLux, but not part of the factory team, was Yazeed Al Rajhi and Michael Orr, along with others as part of Overdrive Toyota. 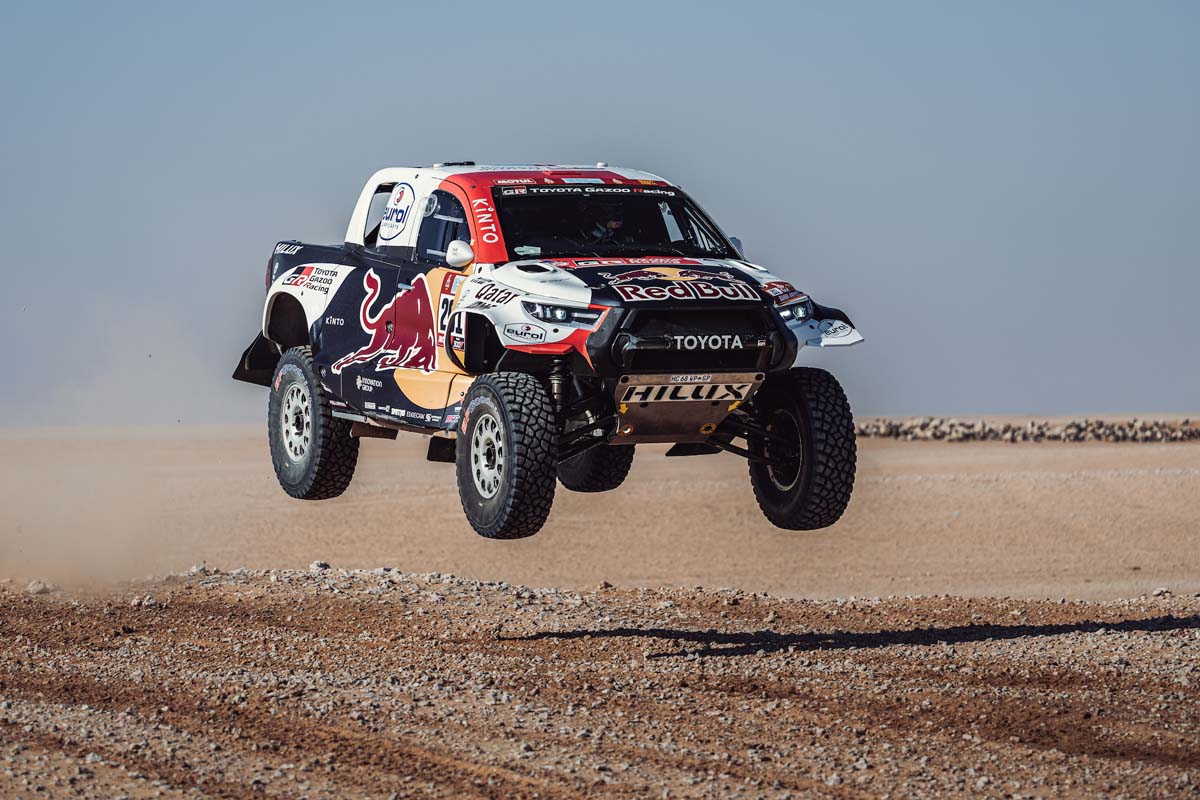 Against them, the main opposition was considered to be the Bahrain Raid Xtreme (BRX) squad in their Prodrive Hunter T1+ vehicles. Led by Sebastien Loeb with Fabian Lurquin, BRX also included Orlando Terranova and Daniel Carreras, with Nani Roma and Alex Bravo ensuring the team had considerable experience at their disposal.

The wildcard was Team Audi Sport, who were fielding the all-new, electric-powered Audi RS Q E-Tron and a formidable driving lineup in Stephane Peterhansel and Edouard Boulanger, Carlos Sainz and Lucas Cruz, and Mattias Ekstrom and Emil Bergkvist. While up against the T1+ entries, the Audis were running their own race in the T1 Ultimate class for alternative power vehicles. 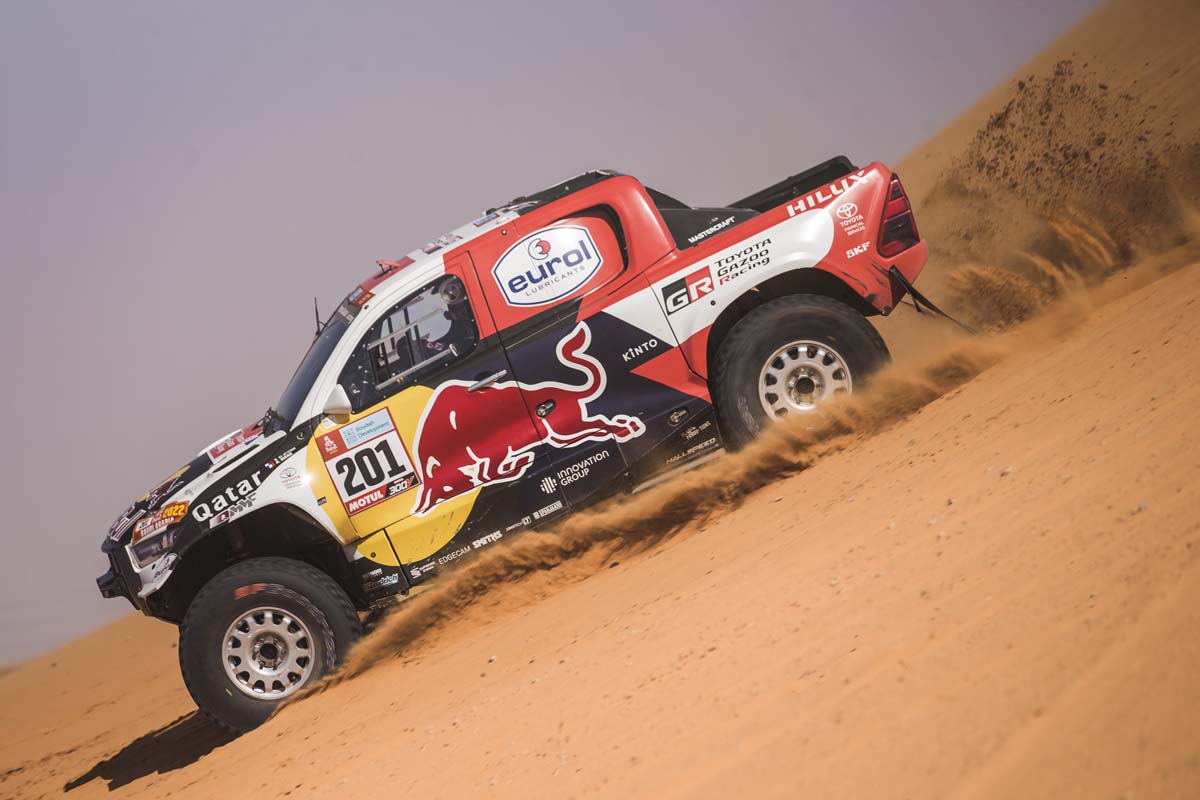 A challenge for all starters would be the route for the 2022 Dakar, which boasted a large amount of sand dunes and would be one of the most challenging in terms of navigation.

For the third Dakar held in Saudi Arabia and the 44th running of the rally raid, crews gathered in the Red Sea port city of Jeddah, heading inland for an opening stage that was split into two sections before the serious racing got underway in Ha’il on Stage 1B. 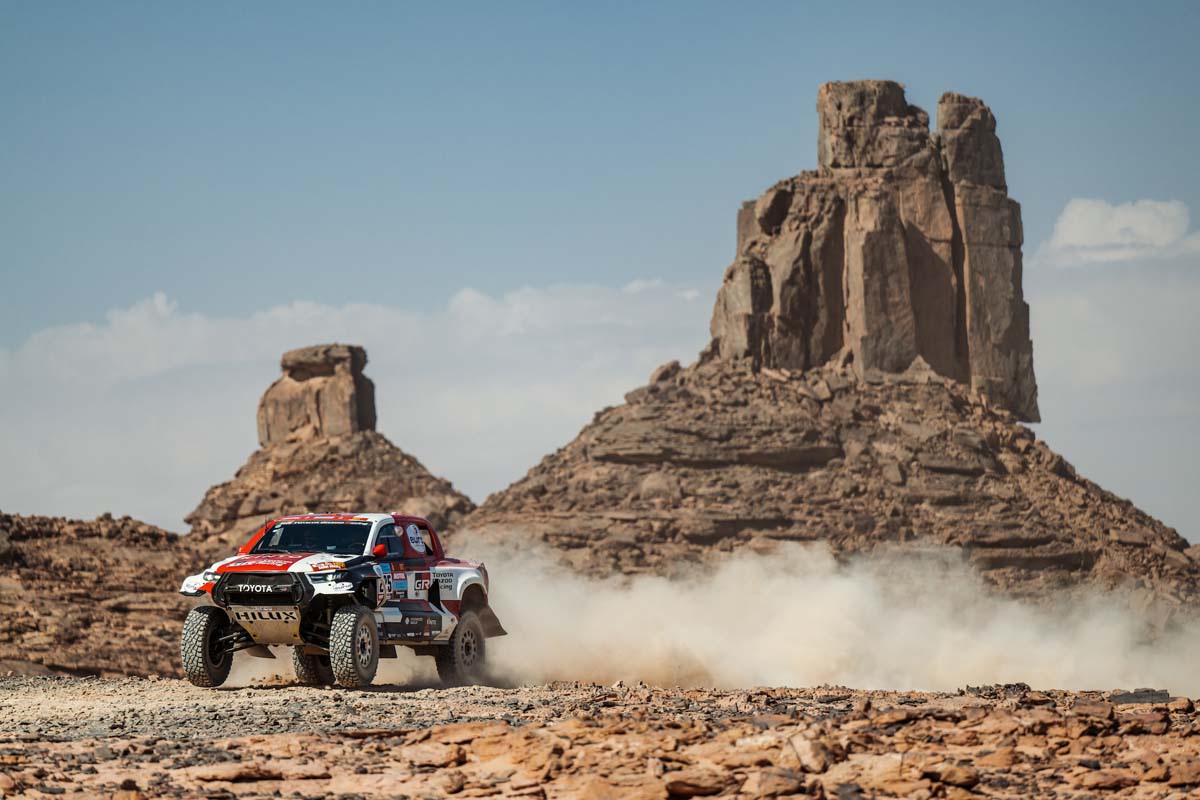 In the lead after the prologue, Al-Attiyah maintained his advantage after Stage 1B, thanks in no small part to a disastrous day for the Audi teams. Both and Sainz and Ekstrom got lost (the former losing over two hours), while Peterhansel ripped a back wheel off his RS Q E-Tron, suffering major suspension damage in the process. On only the second day of the 2022 Dakar, Audi were out of contention. 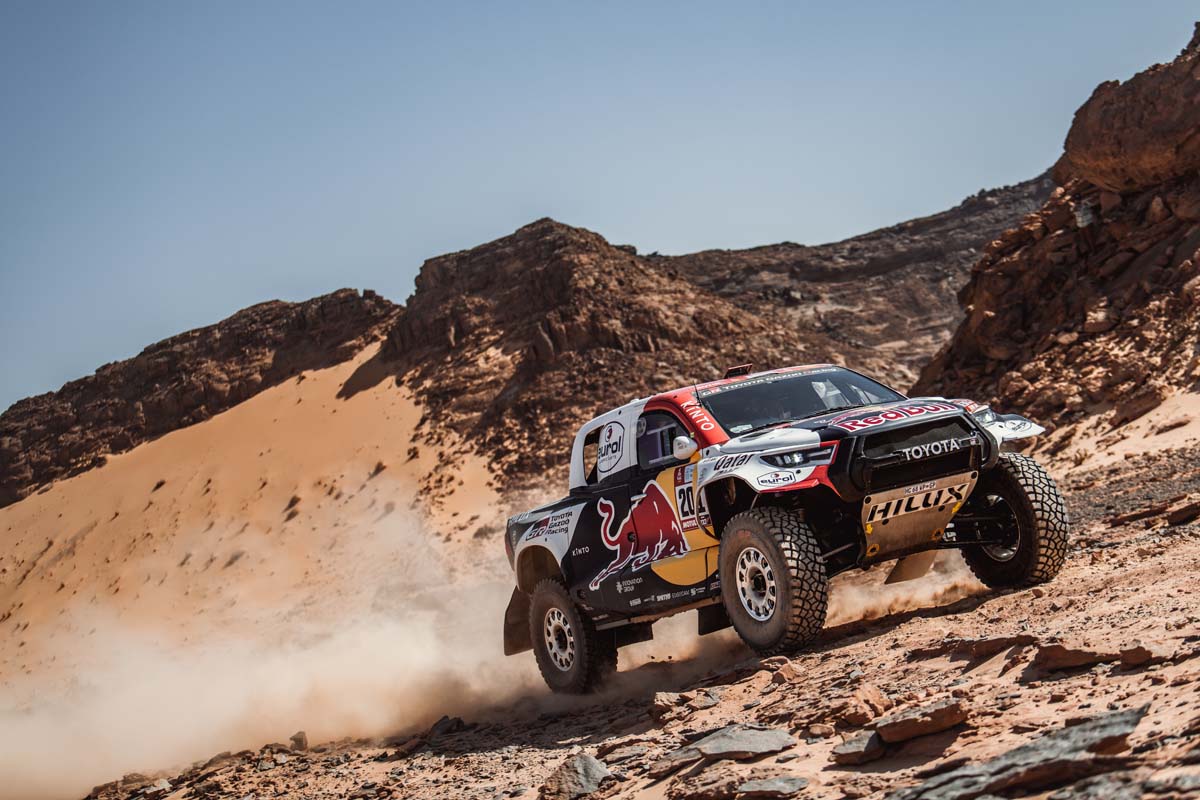 Loeb won Stage 2 and was in second overall, maintaining that place despite a broken driveshaft early on Stage 3 that meant he had to crawl through the special with two-wheel drive only. Al-Attiyah lost time on Stage 3, too, but did not lose his lead in the general classification.

The Potential of Electric

With no chance of victory and nothing to lose, Audi were now using the remaining stages as development for the RS Q E-Tron and showed what may come in the 2023 Dakar with some impressive stage times over the rest of the opening week, including a 1-3 finish for Sainz and Peterhansel on Stage 3, with further stage wins in the second week, too. 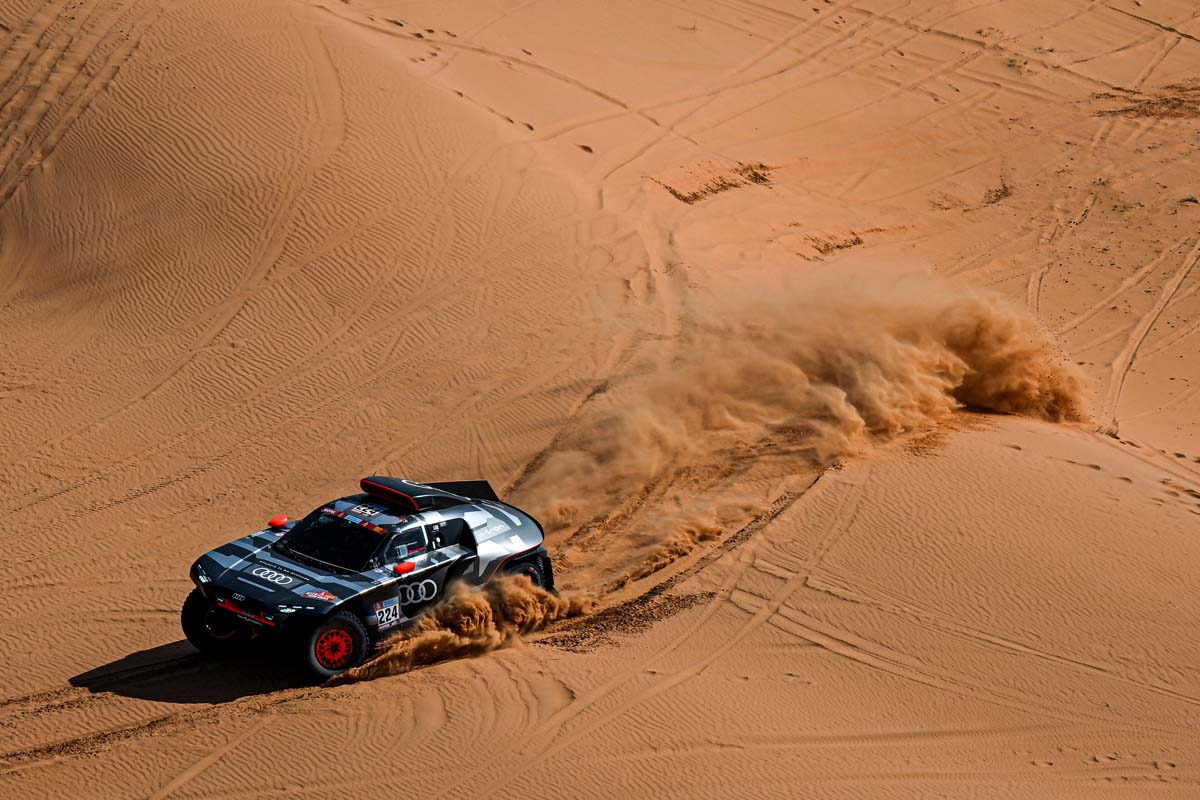 Even though the RS Q E-Tron was 200kg heavier than the class minimum weight requirement, it was blisteringly fast, so once reliability issues are sorted out back at Audi HQ, along with the human factor of navigation that can’t be fixed in the workshop, the Audis may be unbeatable in the future.

One Week Down, One to Go

At the rally’s rest day in the Saudi capital of Riyadh, Al-Attiyah was still in the lead after six stages, with HiLuxes filling four of the top five placings. The exception was Loeb, third overall and 50 minutes behind Al-Attiyah, with Al Rajhi between the two. 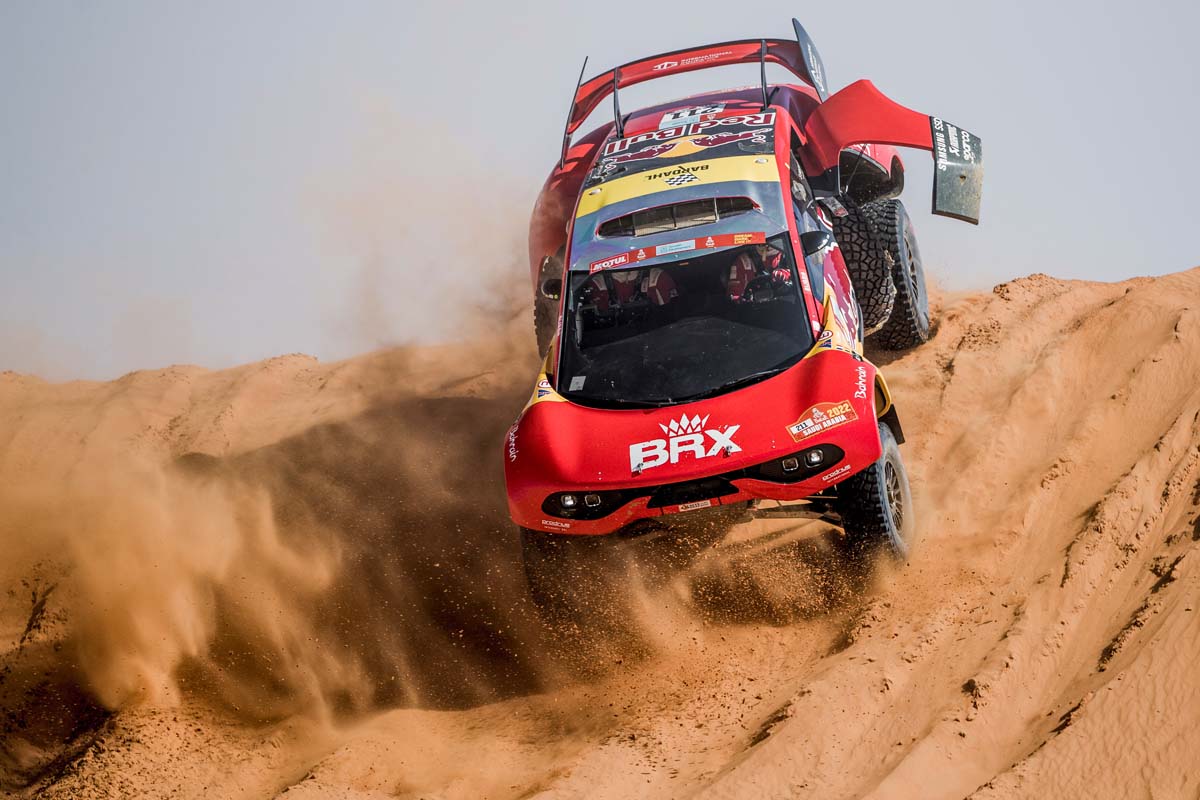 The second week got underway with Loeb showing renewed determination to reduce the margin to the leading Al-Attiyah, winning Stage 7 and cutting 5 minutes from the Qatari’s overall advantage. After Stage 8 (which Ekstrom won for Audi), that margin had been cut to 32 minutes. 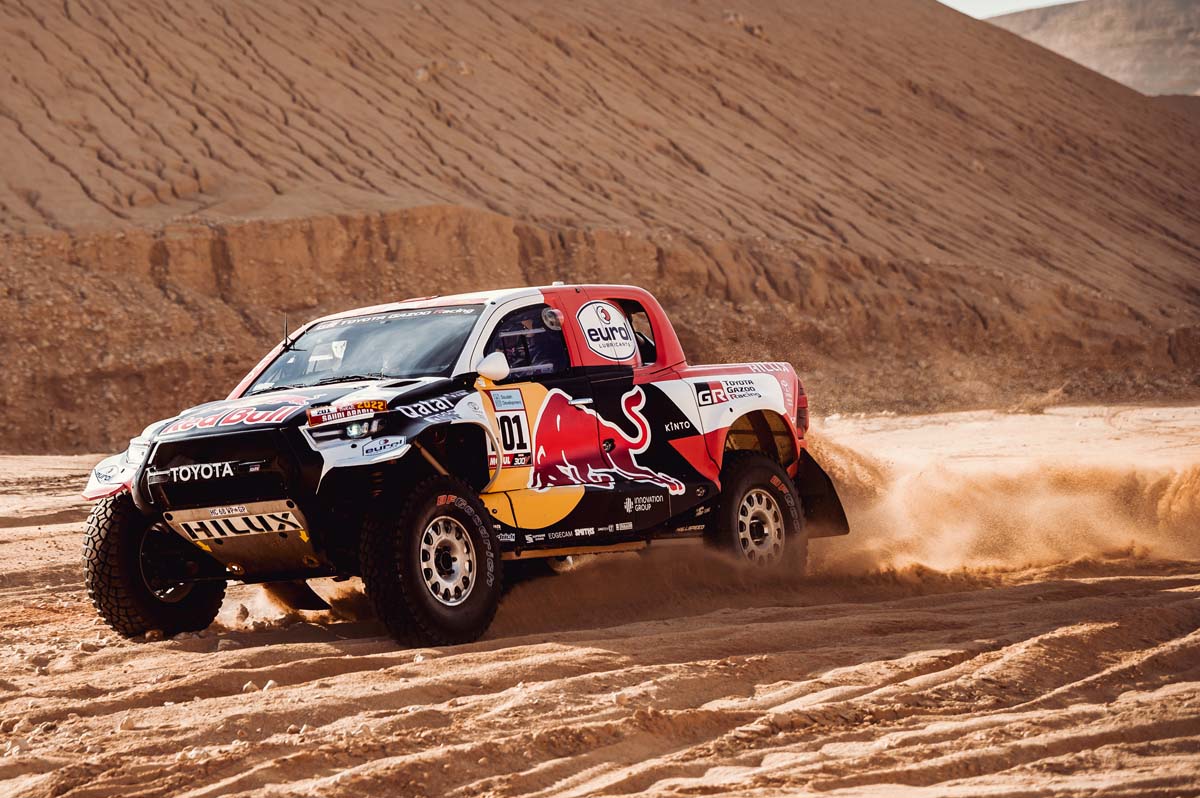 Gaining only a few minutes each day wouldn’t be enough for Loeb, though. He needed a major mechanical problem or navigational error from Al-Attiyah to improve his chances, but that didn’t happen.

The wily Qatari knows how to drive the Saudi terrain and with near-flawless navigation from Baumel, the pair were in the box seat with a few stages left to run. 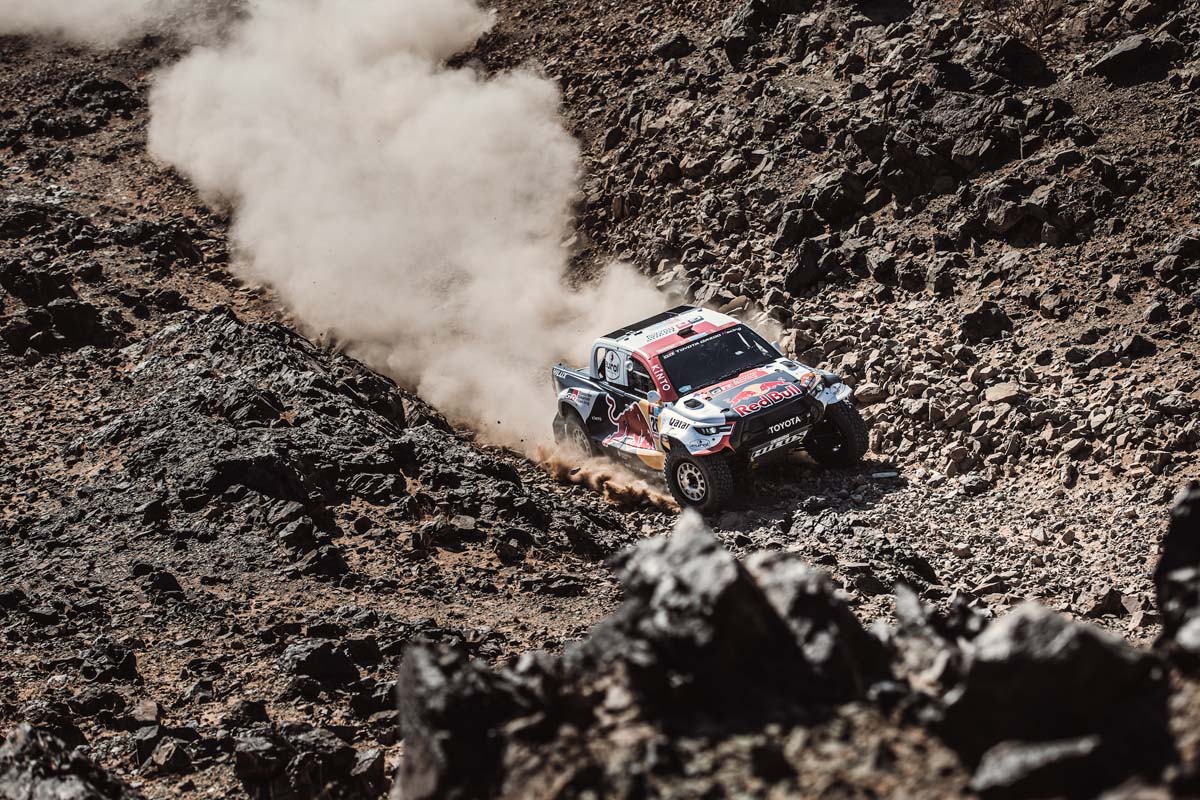 Reflecting Toyota’s stranglehold on this year’s Dakar, Stage 9 saw Hiluxes finish the day 1-2-3 and Al-Attiyah extend his lead in the general classification to 39 minutes. For the remainder of the 2022 Dakar, the Qatari’s advantage hovered around the 30-minute mark.

Peterhansel salvaged some pride with a win on Stage 10, while Sainz was victorious on Stage 11.

Try as he might, Loeb couldn’t cut the margin to the leading Al-Attiyah, who eased off on the twelfth and final stage to take the overall win. This was the Qatari’s fourth Dakar victory and second with Toyota. 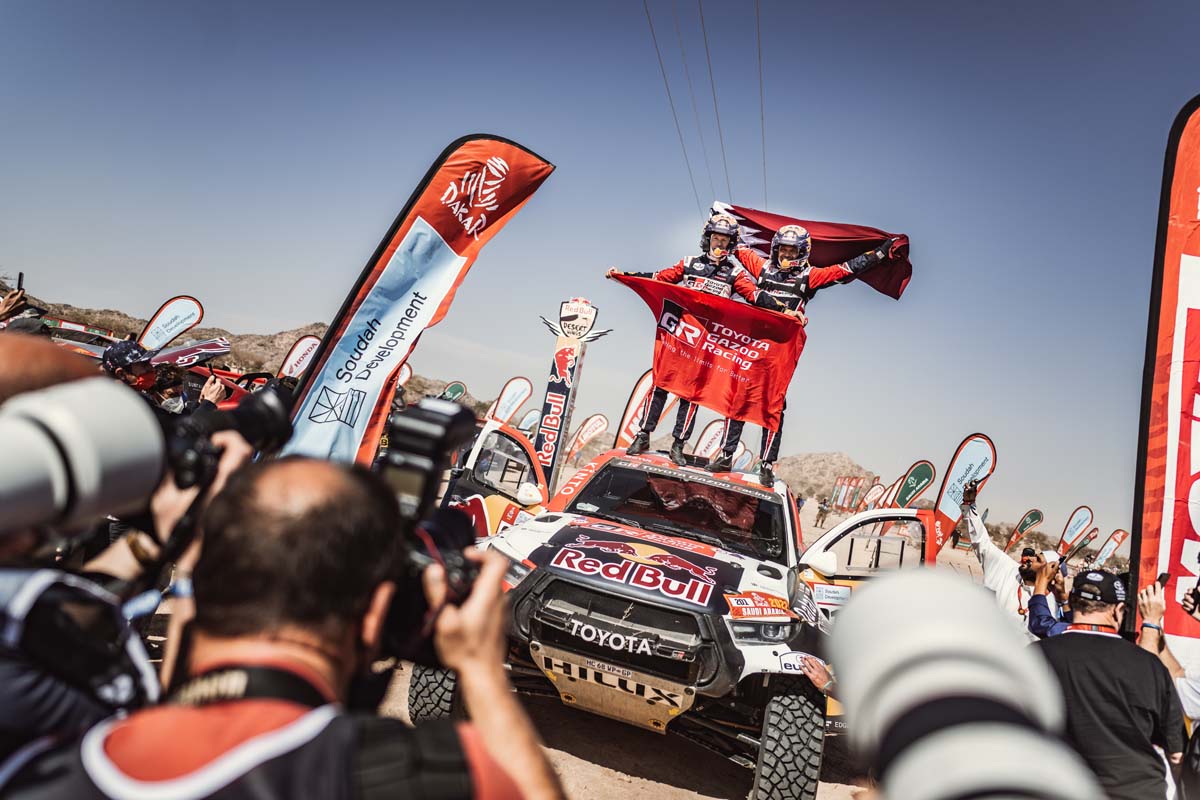 Al-Attiyah led the general classification from start to finish; a rare feat in Dakar’s 44-year history and virtually unprecedented in the new millennium.

“Such an amazing feeling to win Dakar! We lead right from the beginning, and managed to control the pace throughout the race, making it an amazing win,” Al-Attiyah enthused. 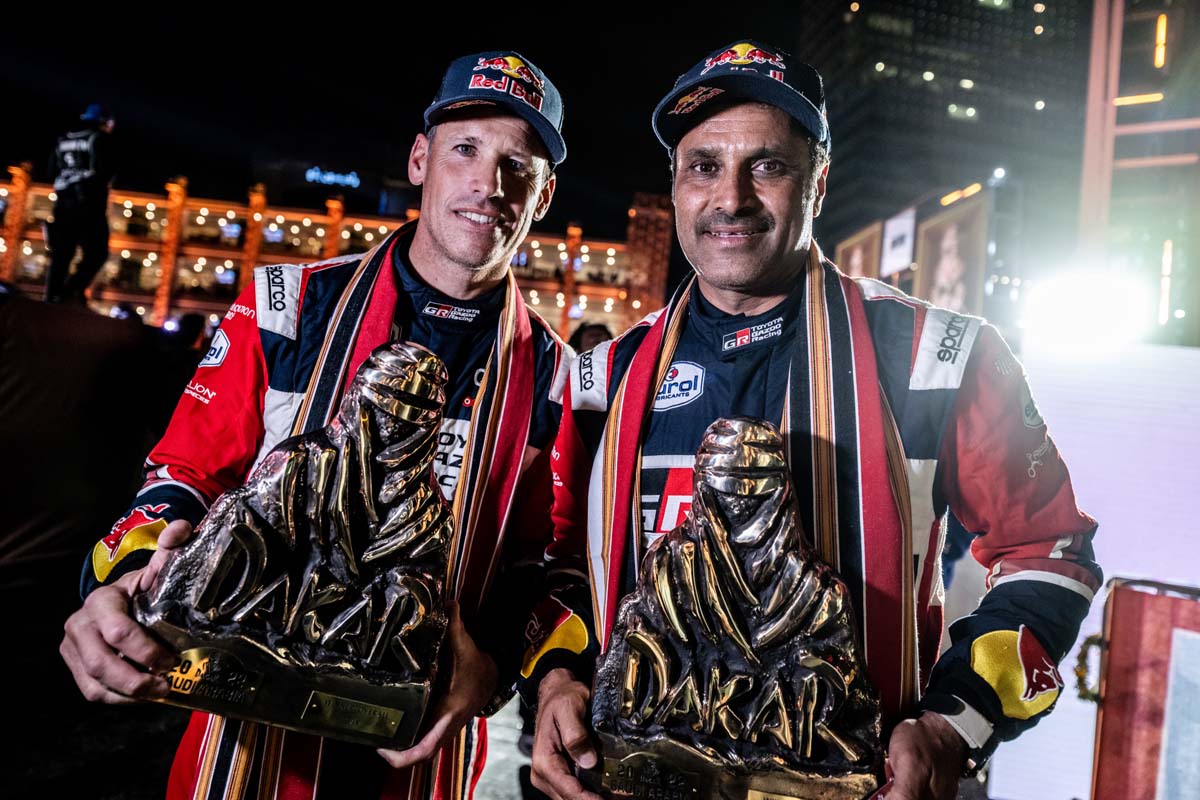 “I’d like to thank Toyota Gazoo Racing and all our sponsors for the support. I’d also like to thank our Team Principal and Technical Manager, Glyn Hall, for building this fantastic new Hilux T1+. It was an amazing Dakar and I am extremely happy.”