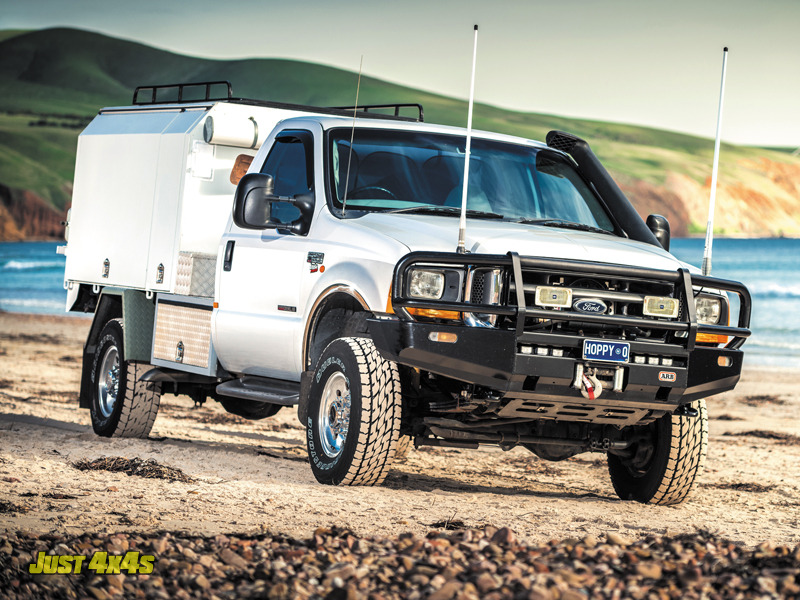 Granted, the present state of this F250 is a long way from its roots as an ambulance in Whyalla, South Australia, but given it was created to travel a long way, that's probably just as well! But the question needs to be asked - why an F250?
With a history in four wheel driving covering more than four decades, Ray Willis has seen it all, done it all and just about driven them all! So he knew what he was doing when he had this Ford F250 modified to 'around Australia' camper-spec.

Granted, the present state of this F250 is a long way from its roots as an ambulance in Whyalla, South Australia, but given it was created to travel a long way, that's probably just as well! But the question needs to be asked - why an F250?

"After years of traveling around Australia, in all different vehicles, in all different directions and on all different tracks, I saw the need for a bigger truck as we were also pulling a heavier off road caravan," Ray explained. "So, in 2004, I purchased my first F250; a 7.3-litre turbo diesel V8 auto four-door ute. To me they were like a breath of fresh air and just did everything so much easier."

Unfortunately, Ray became seriously ill, and later disabled, which led him to sell that vehicle. The touring and travel bug remained, however, but Ray's altered circumstances meant his next touring vehicle would require a different approach to its fit out.

The good experience with the first one meant Ray's next unit would also have to be cab chassis 4x4, with the 7.3-litre turbo diesel V8 and auto transmission. As enthusiasts will no doubt know, late model F250s aren't exactly thick on the ground in this country, so finding a good one was going to be a challenge, especially in South Australia.

"Having the experience of already owning an F250, I knew that if I found one that had not been service or looked after properly, then I would regret it dearly in dollar terms," Ray chuckled.

Around ten months after the search for F250 'Version 2' began, Ray discovered that the State Ambulance Branch in Whyalla was getting a new vehicle. Due to go under the hammer at the SA Government auctions, the "old" F250 4x4 fitted Ray's needs to a T. Being an ex-ambulance, it had been regularly serviced, had extremely low kilometres, and had never done any towing.

Job one - suspension
Ray was the successful bidder for the F250, and once purchased, the first job was to strip it down completely. The soft-riding, road-spec air suspension was dumped, and in its place a full combination leaf spring/shock set-up was fitted by the crew at Morphett Vale ARB.

The new gear consisted of rebuilt front suspension with an extra leaf in the springs and tandem ARB nitro shockers. At the rear, the heaviest duty Old Man Emu 7-leaf spring package available was fitted, again supplemented by ARB Nitro shocks. Combined with an ARB diff lock and 4.5-tonne towbar, the GVM was raised to 4,490kg and GCM 9,750kg, making it more than suitable for heavy duty caravan/camper trailer towing.

Tailored to Ray
If the rear of Ray's F250 looks like a tradie's ute, rather than the usual camper fit out, it's because it's been specifically built to allow access to all elements easily. "I was finding it too hard to get into the back of the F250," Ray said by way of explanation for this non-traditional layout.

The custom-built body features automatic gullwing side doors, and is sectioned on each side with plenty of attachment and storage options. Fixed to the nearside back corner is a 35-foot collapsible long distance mast for the Barrett 2050 HF Radio telephone. Alongside that sits a spare wheel (a second spare is carried behind the cabin), with a pair of 4.5kg gas bottles on the driver's side.

There's an outlet for the compressor at the rear, while inside the rear body is a fully fused and wired power board, numerous Anderson outlets, dual Hella power outlets, Narva worklights, and a 110-litre aluminium water tank with Bushmaster hot water heat exchanger plumbed in.

The open space between the rear storage and the cabin features the aforementioned second spare wheel, lockable storage box and jerrycan holders, along with holders for shovels, fishing rods and more, with enough space left over to stow other items as required. Slung underneath this space are storage compartments for the auxiliary batteries and on-board compressor.

Previously, a custom boat loader and tinny was stored on top of the rear storage, but Ray has sold these items, replacing them with a roof rack for additional storage options.

More Gear
Like Ray's first F250, this one was also treated to an ARB bullbar with heavy duty winch, diff locks, air compressor and a pair of 'Fat Boy' lights. The standard twin battery set-up features a pair of new Optimas under the bonnet, augmented by three 120 amp heavy duty AGM deep-cycle batteries. These are located in the undertray storage lockers; two on the driver's side and one, with the compressor, on the passenger side.

There's also a 55 amp 240V charger and heavy duty 225 amp alternator, specifically designed for big battery set-ups, that can also be converted to a 200 amp DC welder. Hopefully you'll never need it, but the welder (can take a 3.2mm electrode) could be a handy feature when you're miles from anywhere and need to repair a camper trailer chassis. A 250 amp ARB battery isolator keeps all five batteries juiced up.

Tougher Trans
While the F250's auto makes for easier driving, it was one area that Ray knew he couldn't rely on when it came to serious off-road work.

"Over the years it had become public knowledge to all F250 owners that the auto was the weak point, especially if you plan on any sand dune work or heavy towing," Ray explained. "So I insisted on a better transmission."

Online research led Ray to B&M, USA, who build a bullet proof auto transmission that they also guarantee. "No sooner said than fitted!" laughed Ray. "I must say it is the best F250 auto trans I have had the pleasure of using."

At the time, Ray also had a custom-built 3.5-tonne caravan, which made the trans upgrade even more essential. Unfortunately, that "hamburger with the lot" van burnt to the ground due to a suspected electrical fault. Ray was extremely lucky to get out of that one unscathed. As you can imagine, losing that big-dollar, bespoke-built unit led to lots of swearing!

The B&M transmission uses heavy duty componentry throughout, with a secondary, fan-cooled transmission cooler fitted to ensure the gearbox doesn't cook itself when sand driving. In harmony with the trans upgrade, a Banks Trans Command Unit and ECM upgrade (for better fuel and oil flow) were also fitted, which Ray said have both been great additions.

Inside Job
Ray ensured the cabin got some attention, too, with an Alpine sound system upgrade, including USB, CD and AM/FM radio, making the journey to the campsite more enjoyable. At camp, a slide-on awning includes all poles and ropes, while there's a second sound system in the rear body section, too.

Of course, there's air con and all the other features you'd expect in a modern vehicle, making each journey comfortable.


In finishing, we can't disagree with Ray's assessment of this vehicle. "This truck really is something special."

For health reasons, Ray is reluctantly selling his treasured F250. It's a vehicle he's put a lot of time, miles and dollars into, so he knows its capabilities, and he's sure the new owner will find it ideal for carrying or towing

For contact information and further details, click here or view at just4x4s.com.au under ad code JFM3476324
(NOTE: vehicle was still for sale at time of posting - 26/6/14) 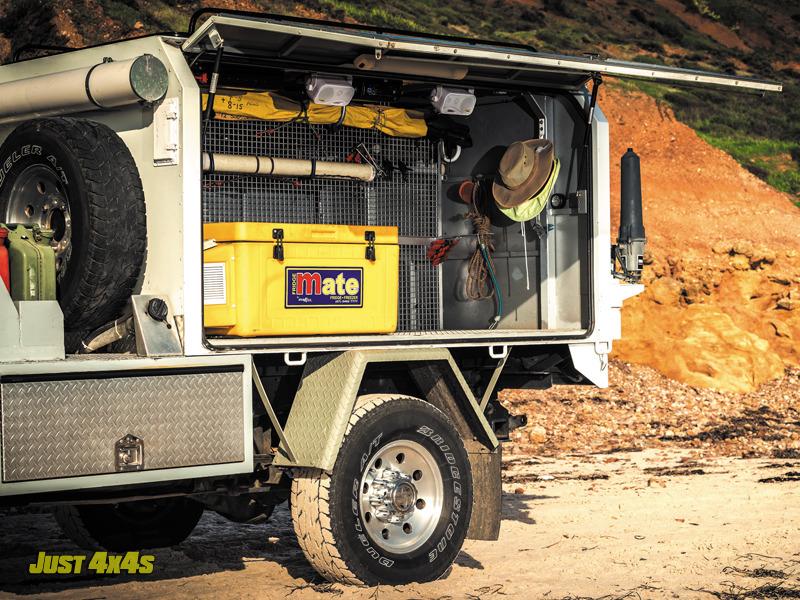 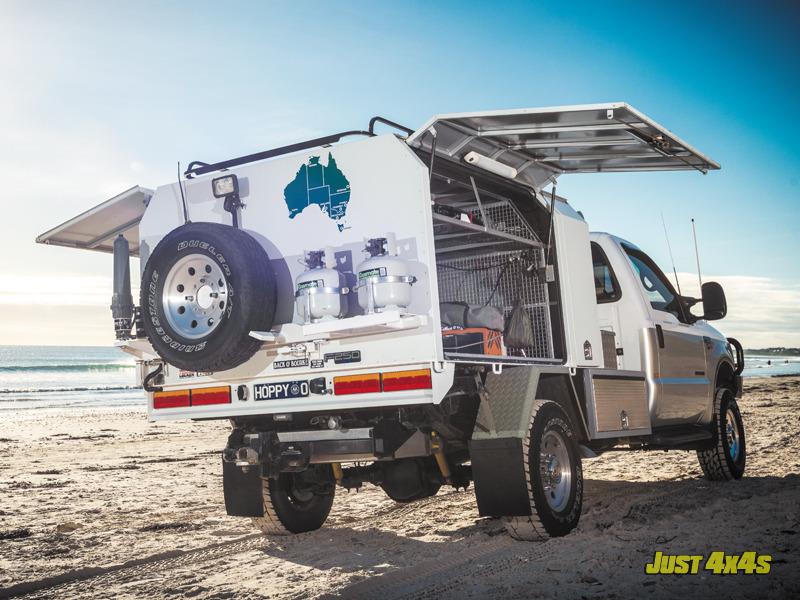 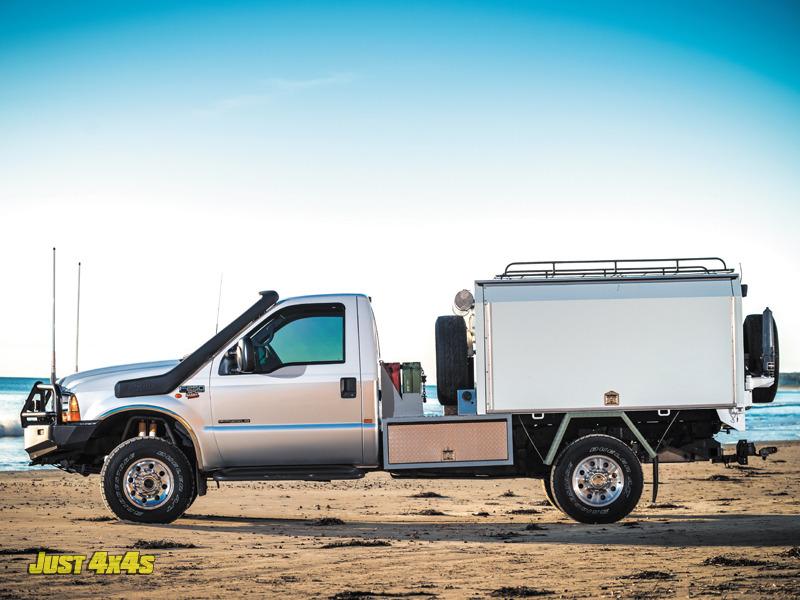 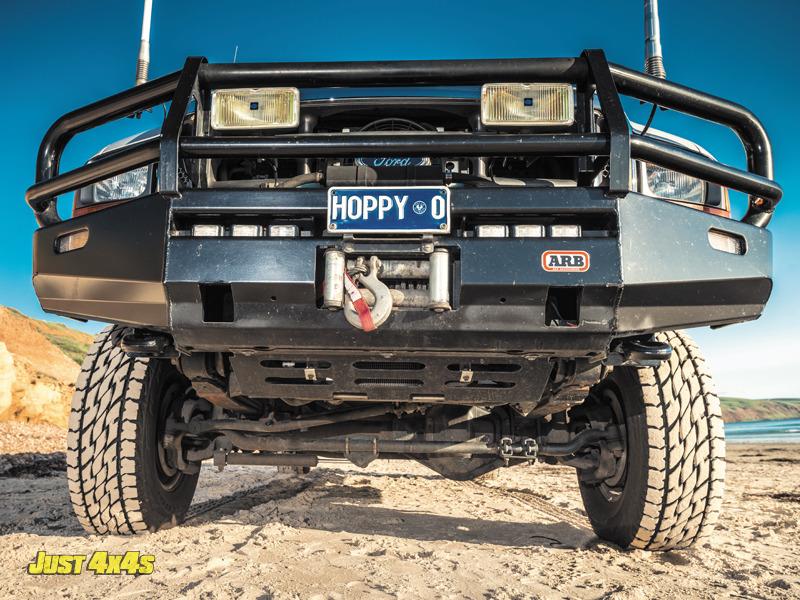 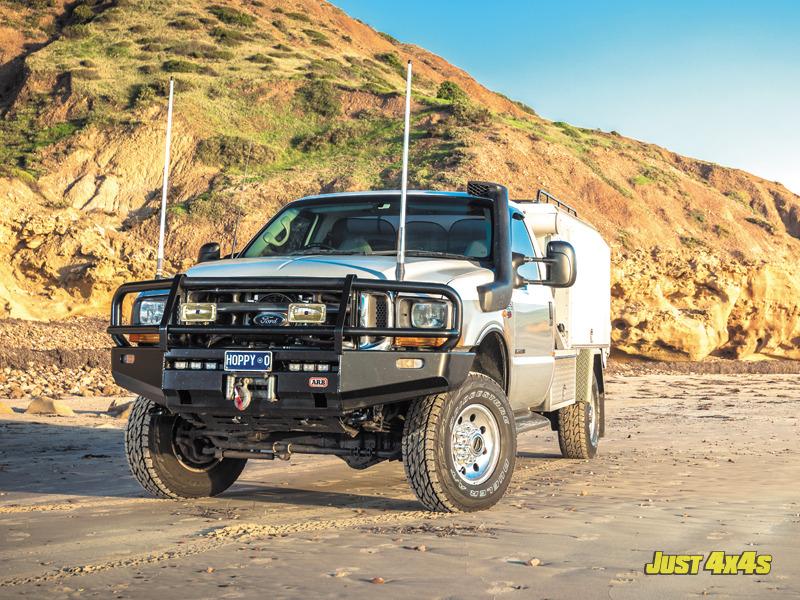