The full-size pickup truck wars in Australia are heating up, with Ford’s announcement in March that they would be bringing the F-150 in as a factory-backed RHD model countered in June by RAM Trucks Australia announcing the 1500 TRX is coming to the Aussie market. 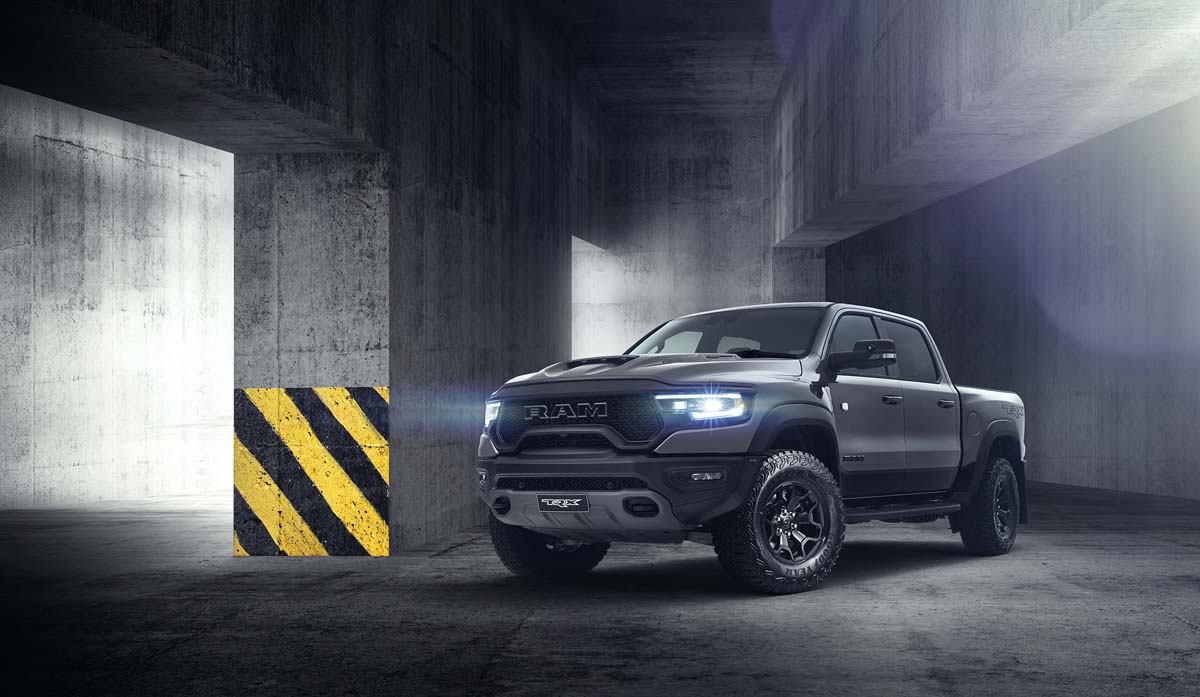 In terms of size, power and presence, the TRX outshines Ford’s Ranger Raptor, with RAM Trucks Australia claiming it's the fastest, most powerful mass-produced truck in the world. 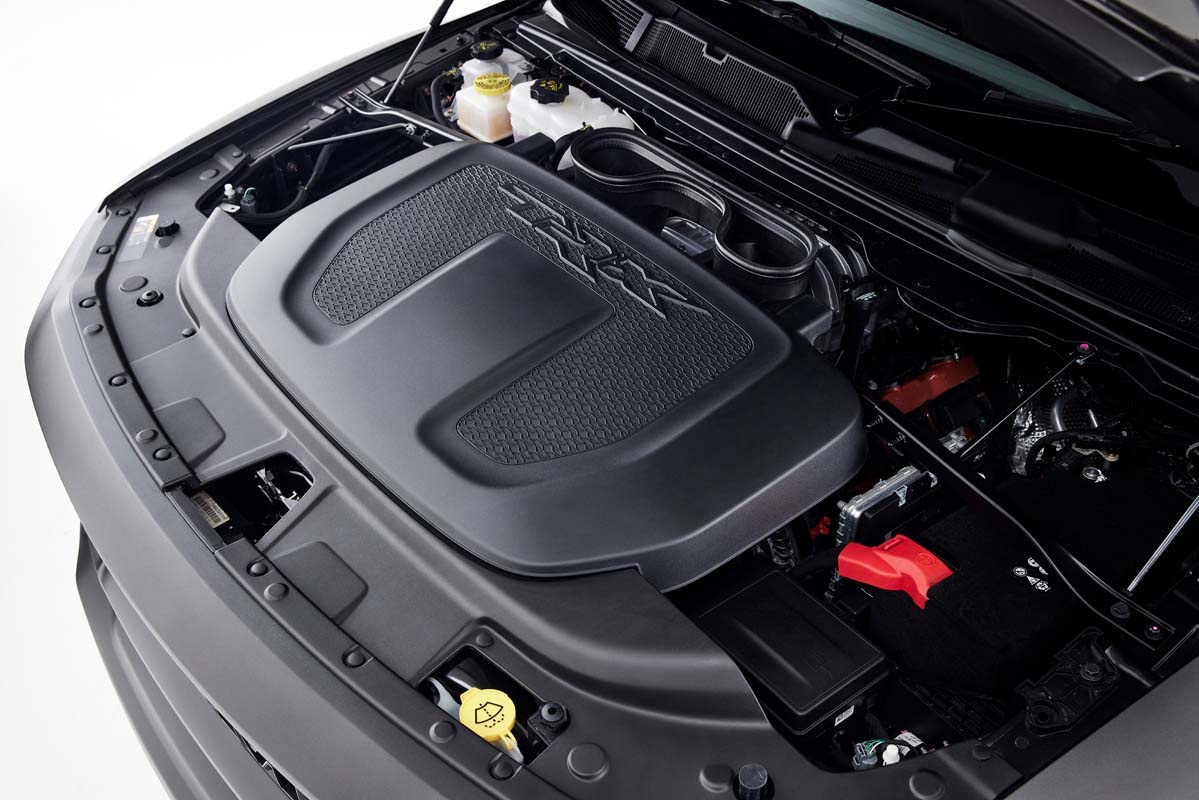 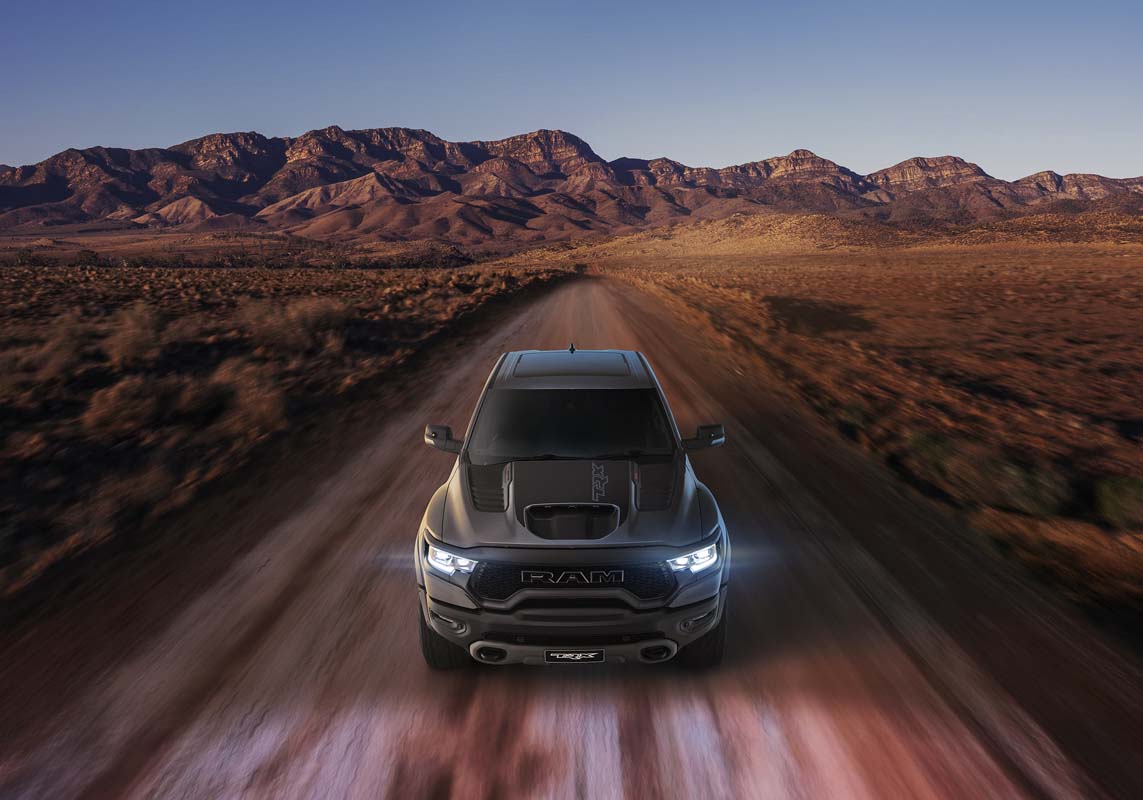 The high-performance V8 is matched to a Torqueflite eight-speed automatic (the only transmission offered) and drives all four wheels through a four-wheel drive system with an active 2-speed transfer case with strengthened internals. 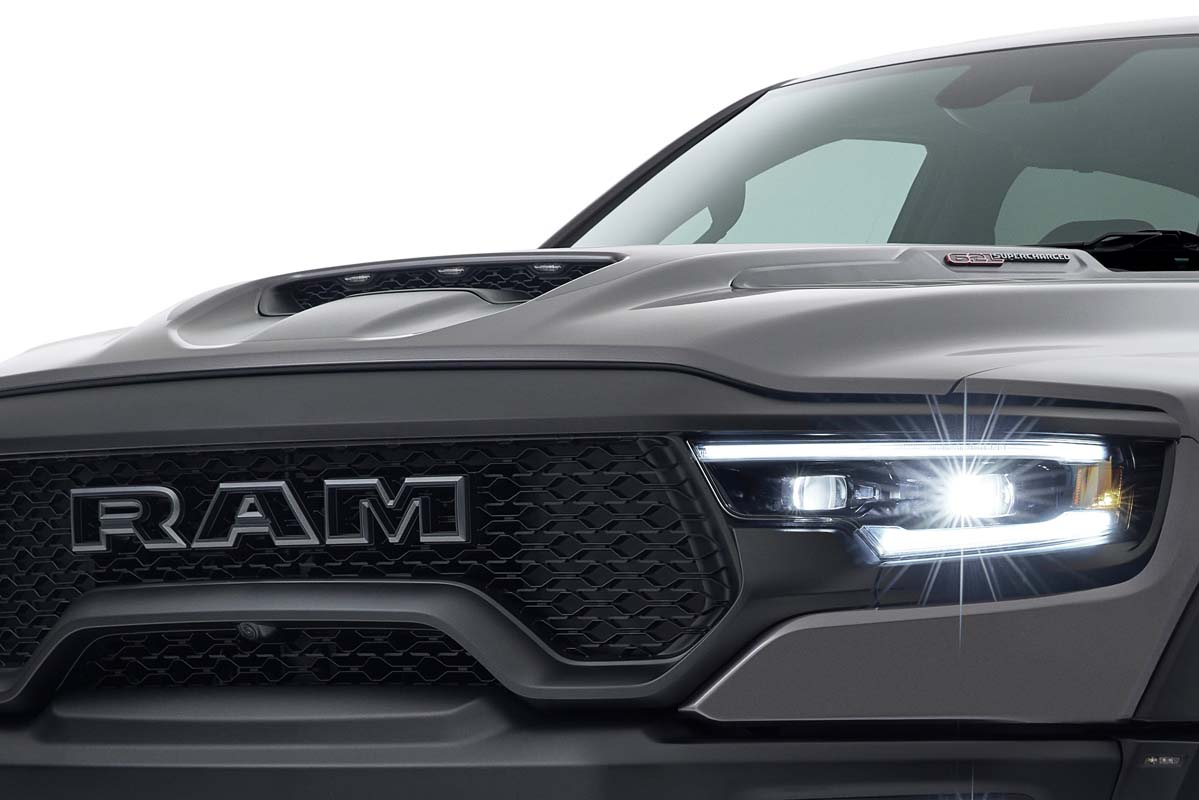 As the TRX is designed with off-road action in mind, induction to the V8 is split evenly across the grille and a scoop on the bonnet. The latter features a special one-way valve that prevents water being ingested into the engine, while the largest air filter in this class features dual elements that claim to trap four times as much dust as its closest competitor – ideal for high-speed work in deserts and other dry, dusty environments. 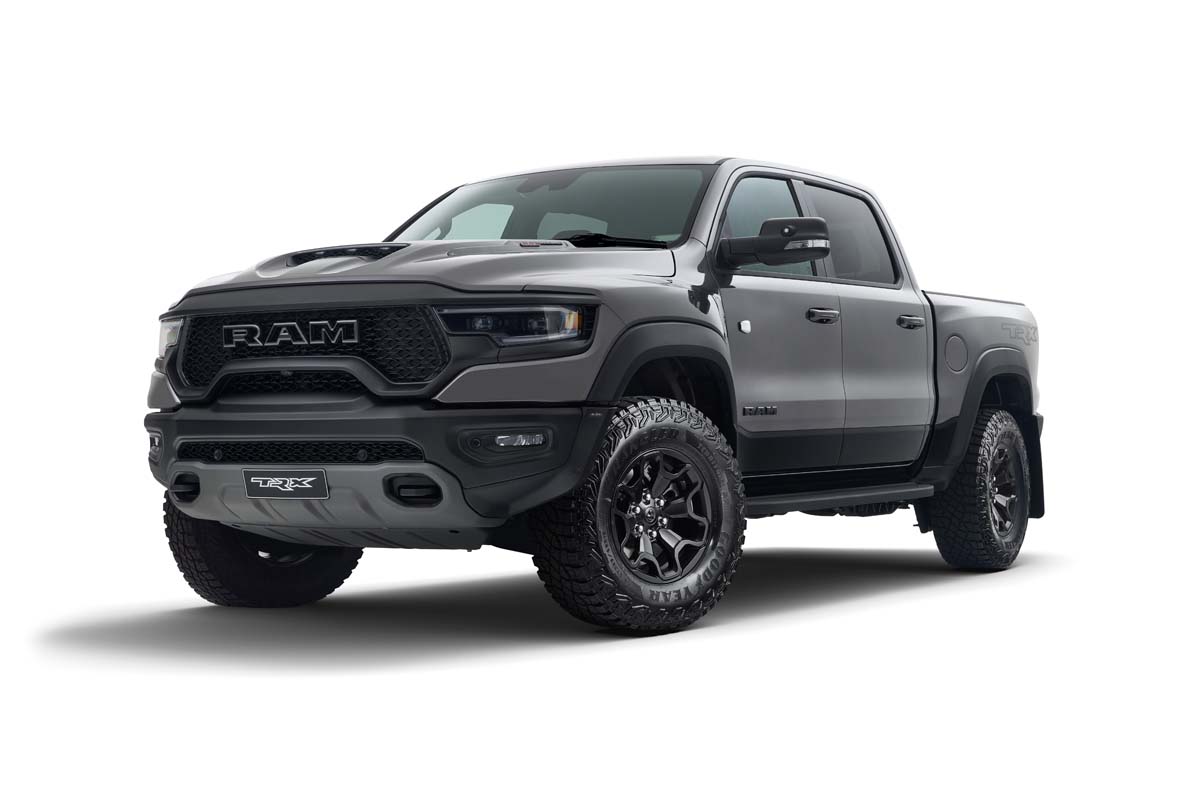 Like the rest of the RAM range, the RAM TRX is of body-on-frame construction, but the performance focus of this model has seen substantial changes made, starting with the frame itself, which is made of thicker high-strength steel, with fully boxed side rails.

Protecting the engine and all the underbody componentry are no less than five skid plates, covering the lower front fascia, front axle, transmission pan, transfer case and fuel tank.

An independent front end remains, but the componentry is all new, while at the rear, a Dana 60 solid axle has been fitted as part of a five-link system, with a 3.55 diff ratio and an electronic locker as standard, as well as an axle hop damper. 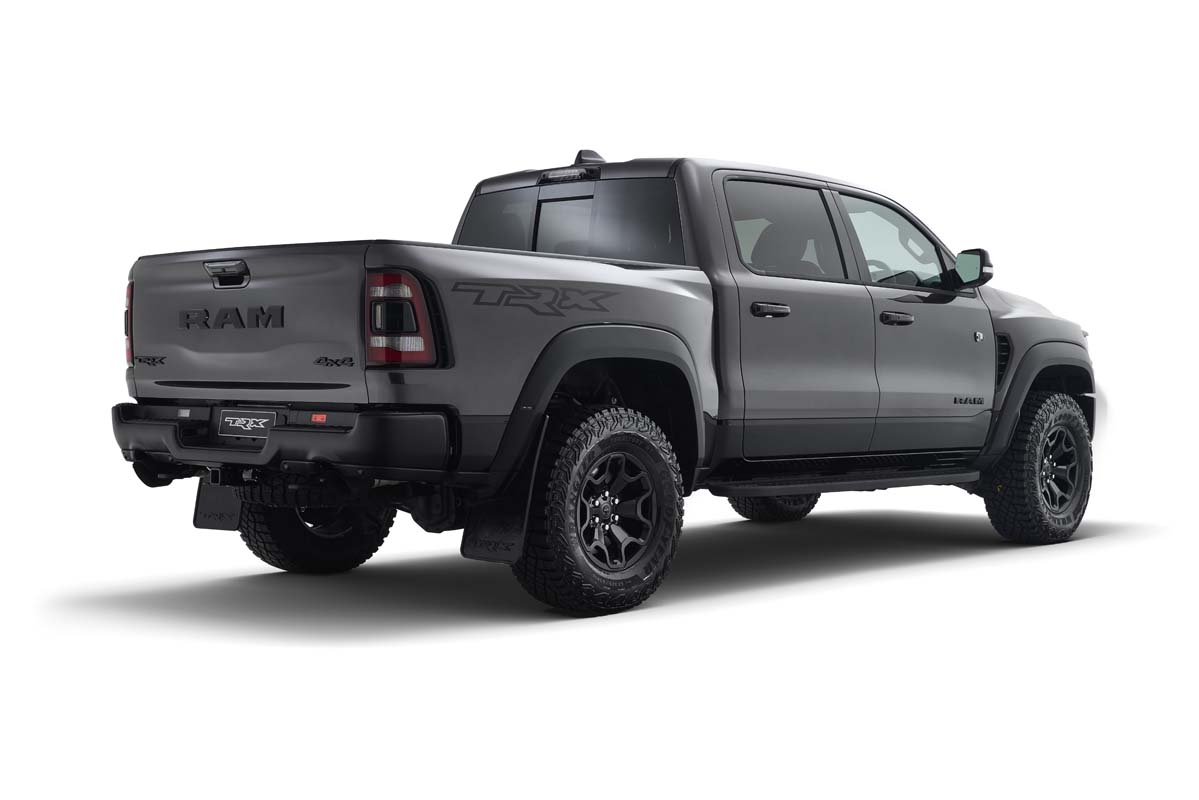 Shock absorbers front and rear are Bilstein Black Hawk e2 units that have been tuned exclusively for the TRX and are also adaptive, delivering what’s claimed to be fast reaction time, unbeatable damping and improved heat dissipation. Suspension travel is significantly greater than that of a regular RAM 1500, with up to 330mm at the rear alone.

The wheel and tyre package is made up of 18-inch alloys with 35-inch Goodyear Wrangler Territory All-Terrain tyres that were designed exclusively for the TRX. This combination has required the front axle to be moved 20mm forward. 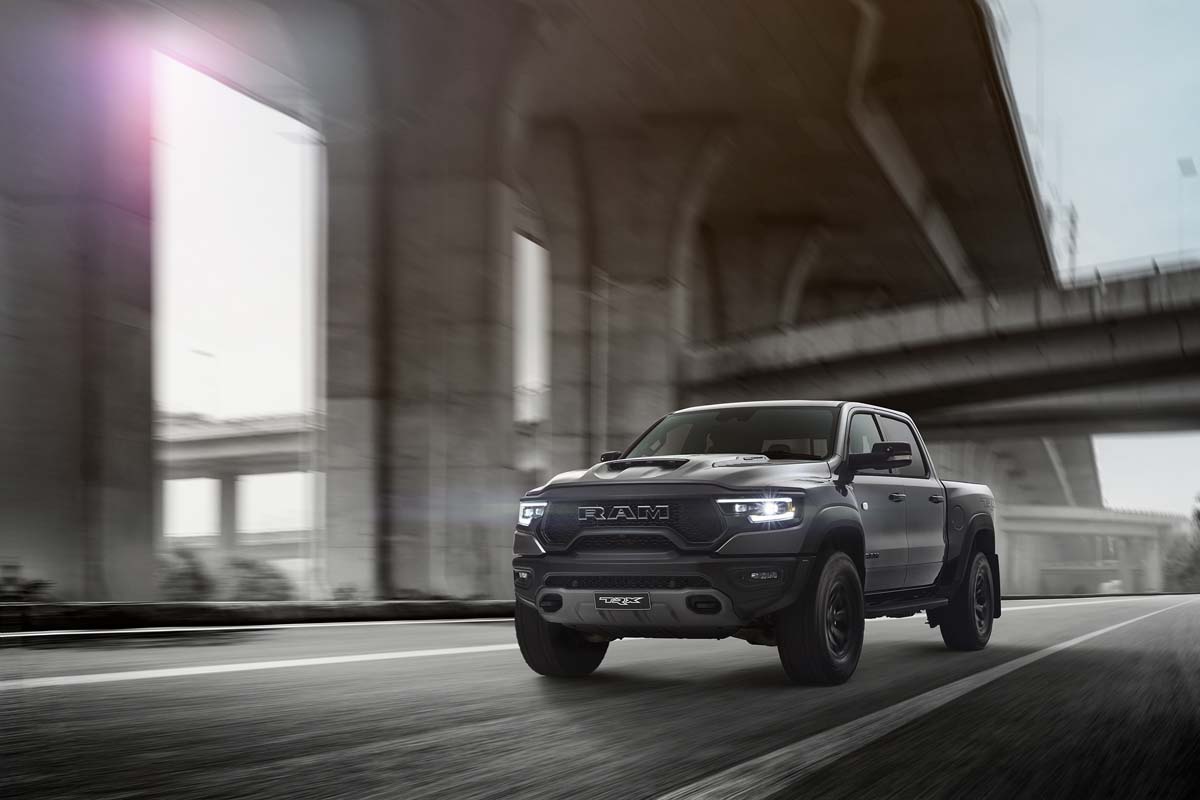 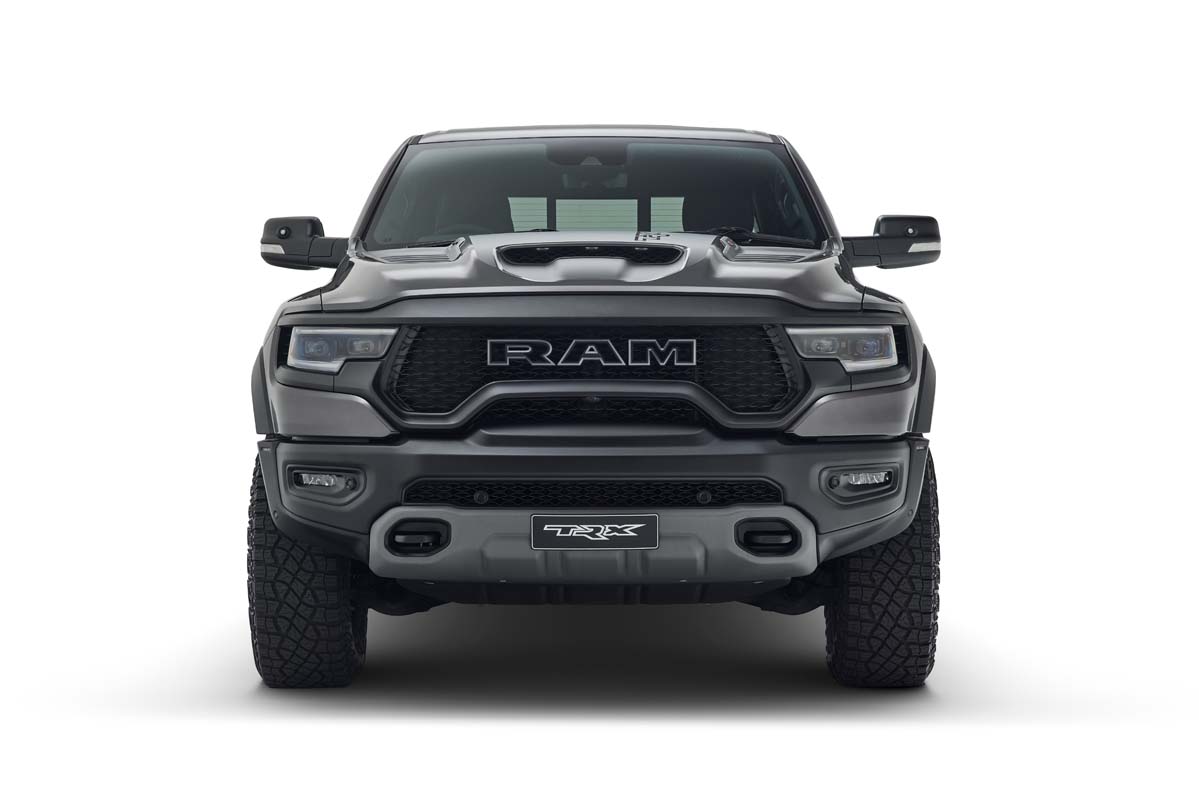 In terms of its appearance, the most obvious difference between the existing RAM 1500 crew cab models and the new TRX is its broad, muscular stance. That’s due to the TRX being 230mm wider to accommodate the 152mm increase in track front and rear.

With the front guards and rear quarter panels already pumped up, the wheelarch flares actually look subtle compared to some alternatives.

The grille treatment, with open ‘R-A-M’ letters, is exclusive to the TRX, as are the bonnet, bumpers and skid plates. Those bumpers are blacked out, with tow hooks front and rear, while the rear bumper also featured scalloped cut-outs for the dual exhaust exits. 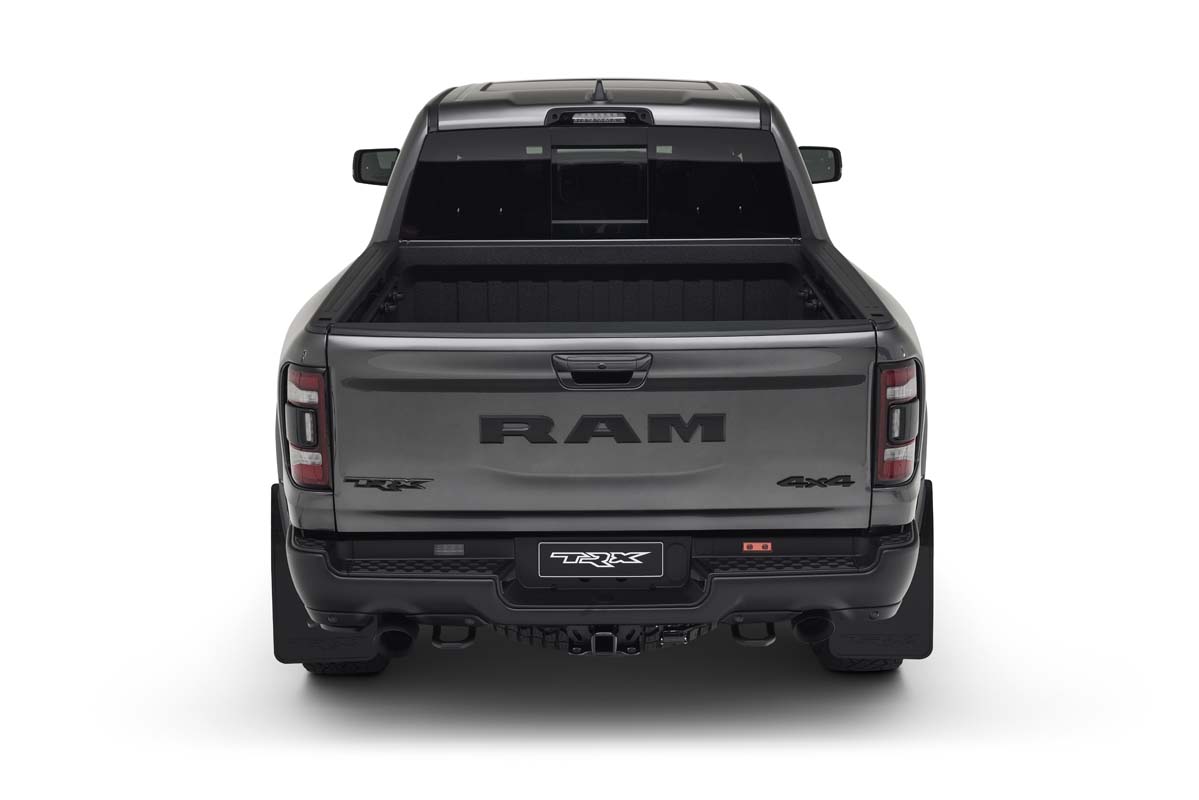 RAM identification is repeated on the tailgate, along with 4x4 and TRX badging, while badging on the bonnet identifies the 6.2 supercharged V8 underneath, with TRX decals on the bonnet and rear quarters.

LED lighting is standard front and rear, but the lights in the bonnet scoop that feature on US market images of the RAM TRX have not been highlighted on the local market images, suggesting they may not be road legal here. 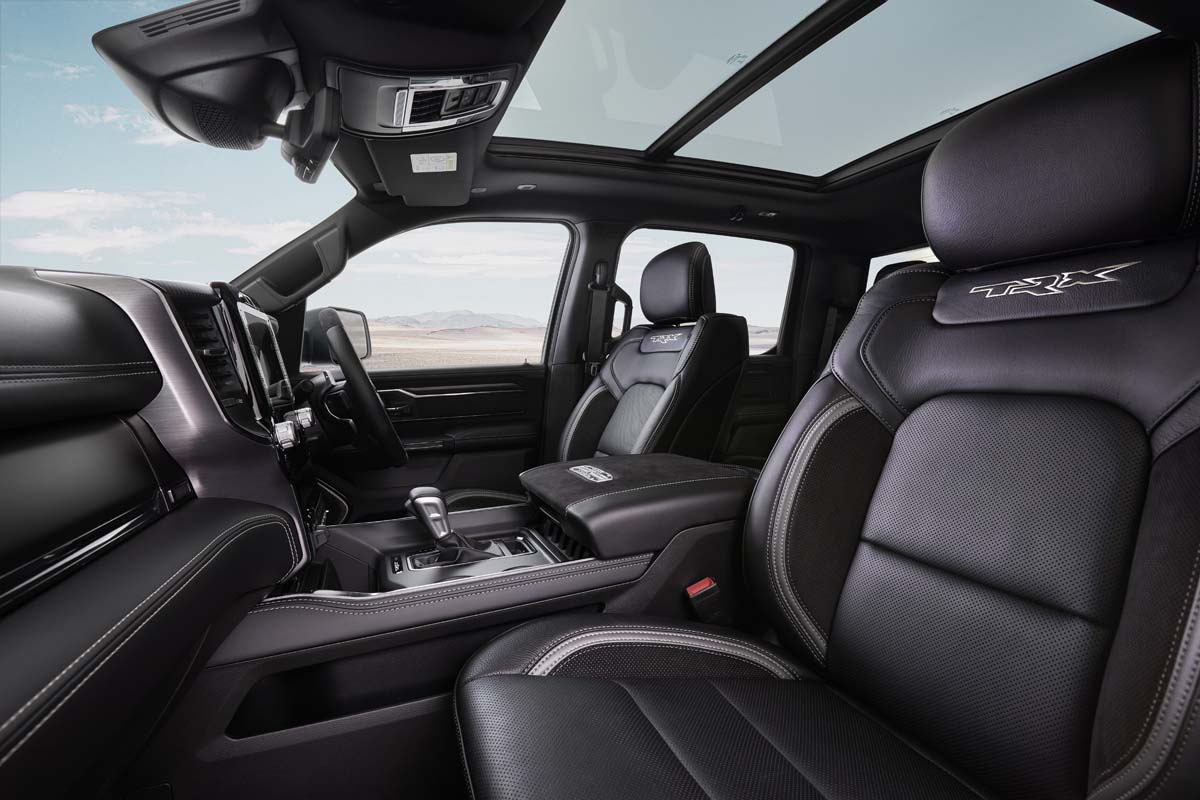 Inside, the focus is on premium materials and a luxury look, applying the ‘TR2 Equipment Group’ based on the RAM 1500 Limited. As part of an all-black finish, leather seats, a leather-trimmed instrument panel, full carpeting and accents in suede and carbon fibre are standard, while all five seats are heated and ventilated. 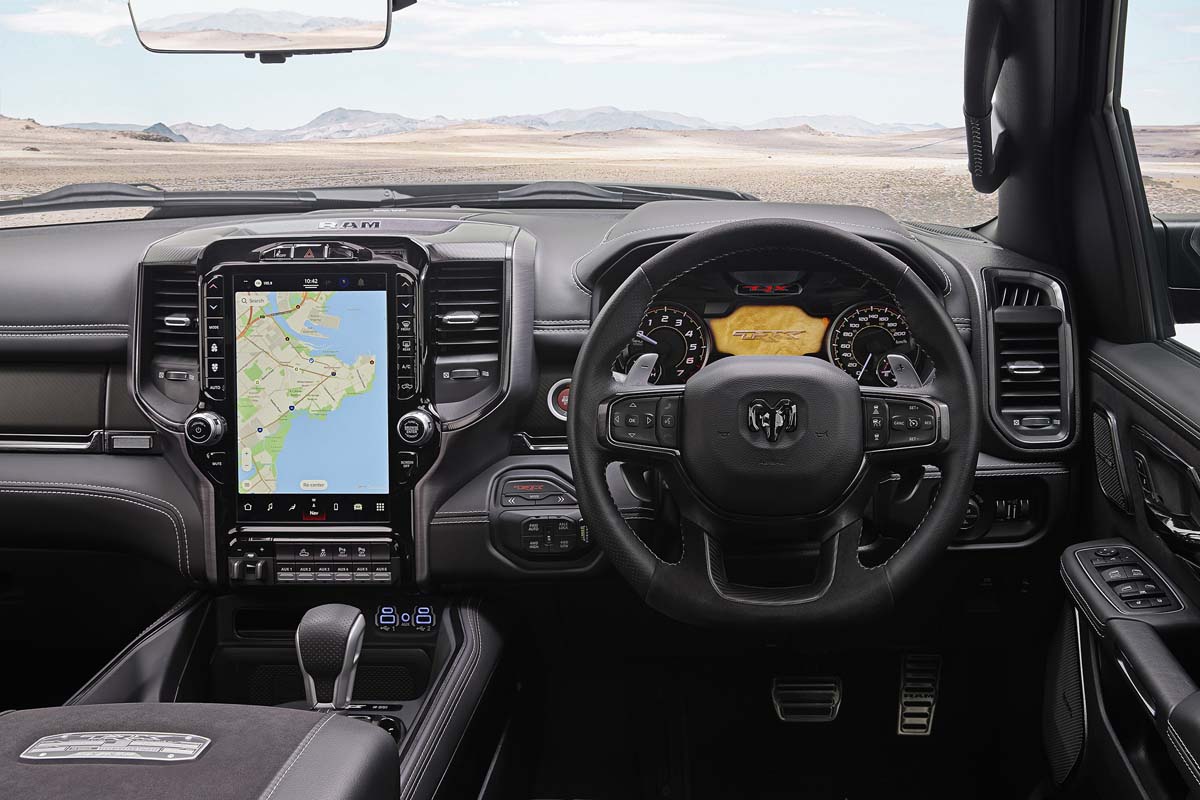 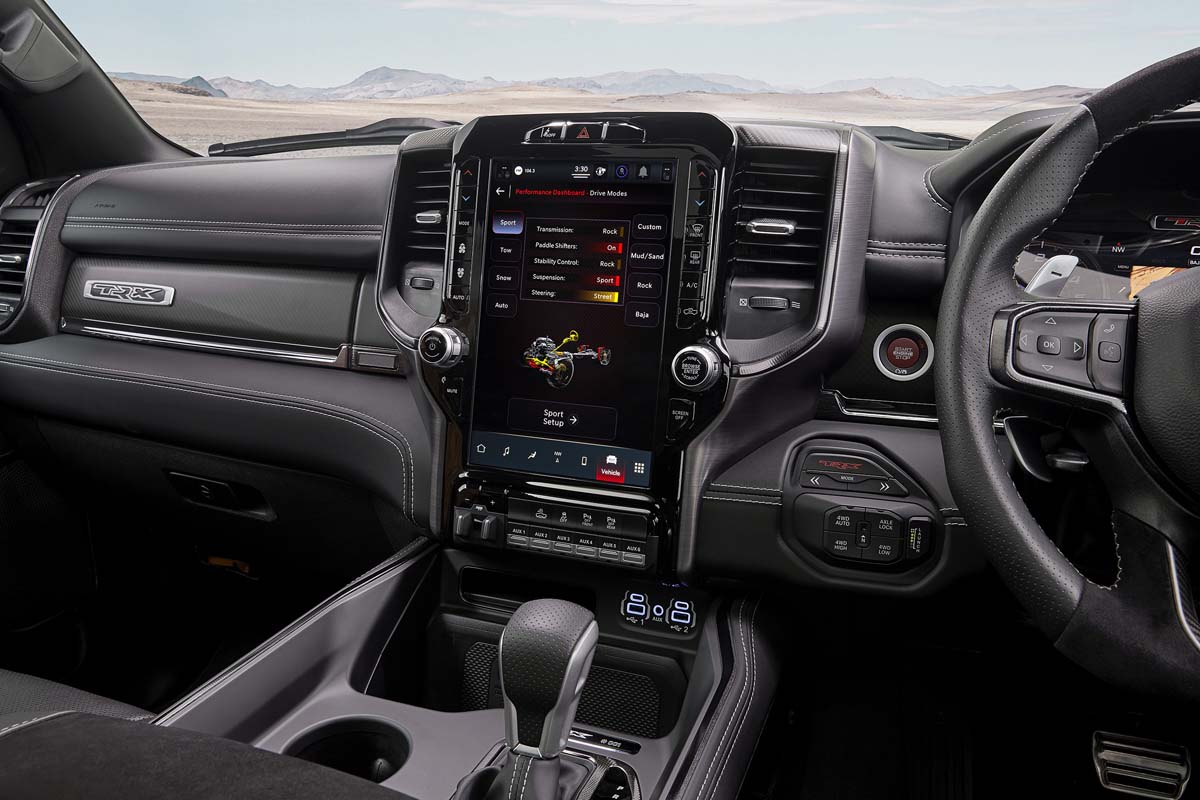 A 12-inch touchscreen for the Uconnect 5C Nav system sits in portrait format and can display two functions at once, while the 7-inch instrument screen is flanked by large analogue gauges. For off-road adventures, the Drive Modes (Normal, Wet/Snow, Off-road and Baja) and Off-road Performance Pages (that show ride height, transfer case position, and the truck’s pitch and roll) are viewable on the main 12-inch screen – a RAM first. 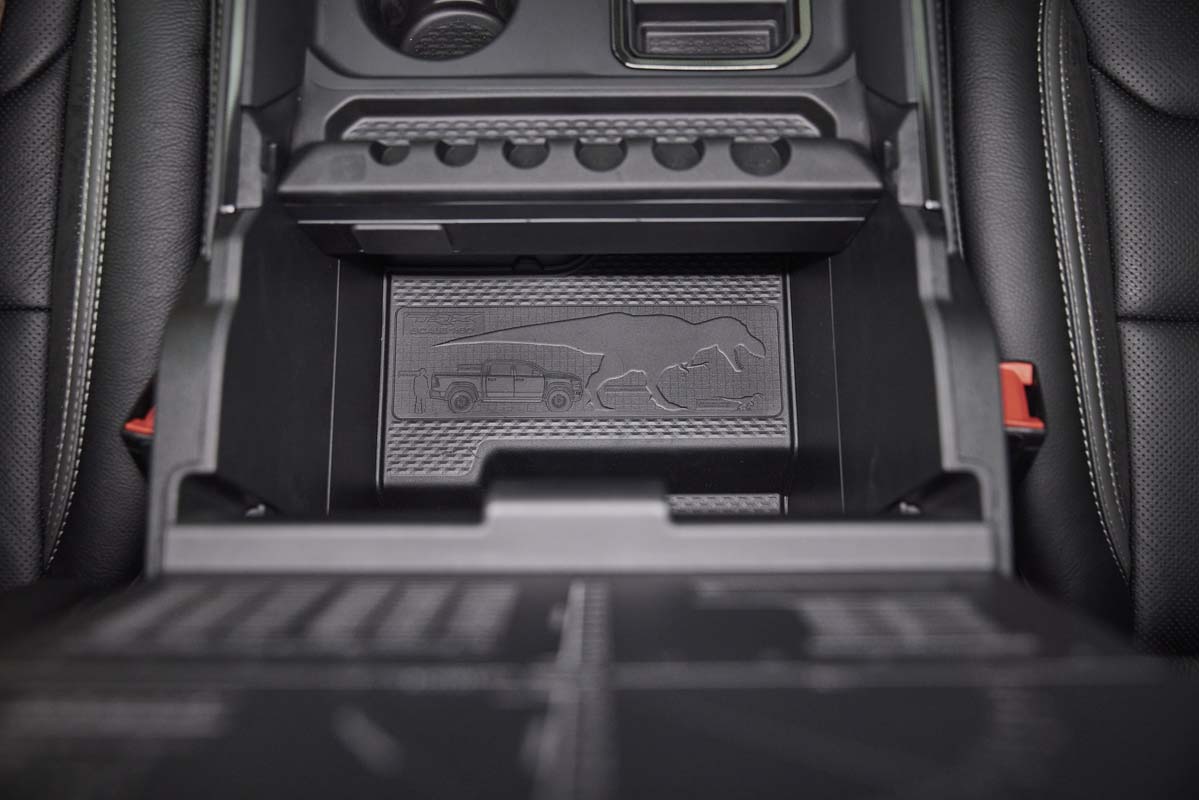 A final, cheeky touch is an image of a Tyrannosaurus Rex and much smaller Raptor dinosaur. Seen in the centre console storage bin and echoed under the bonnet, this suggests the TRX is the apex predator over the F-150 Raptor. 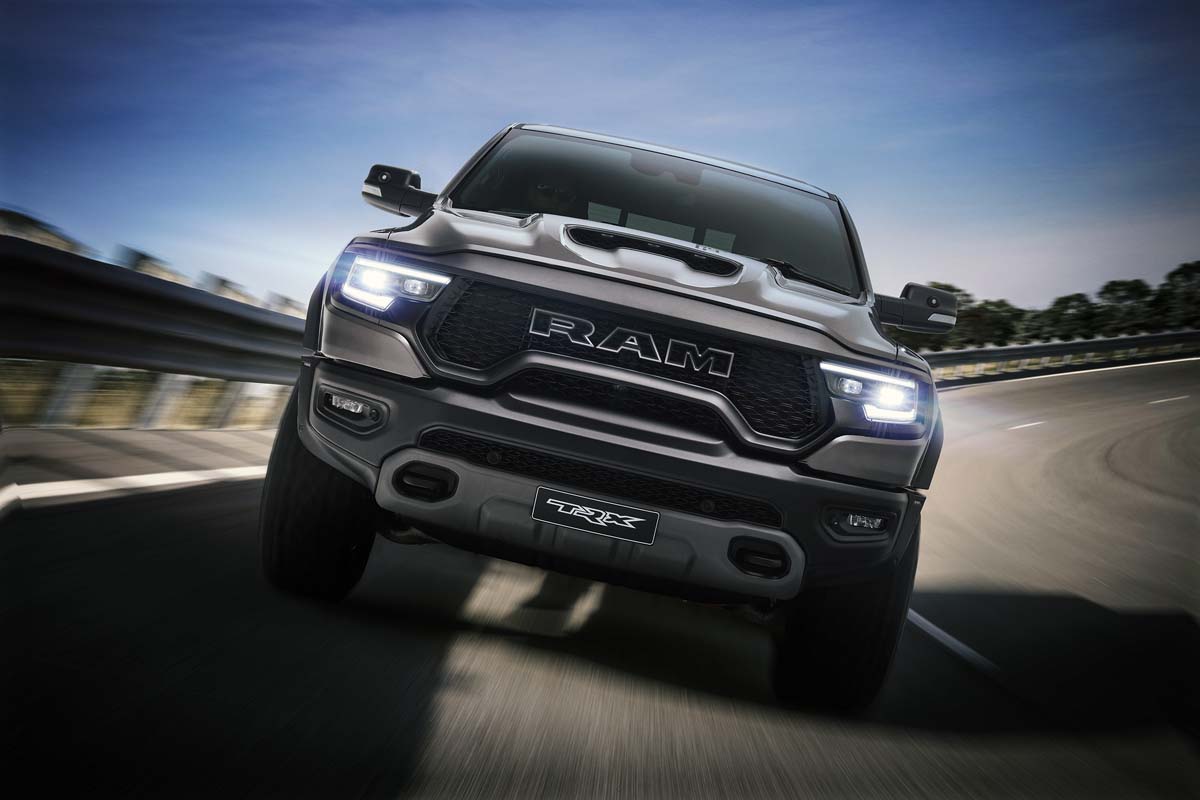 Aside from the aforementioned launch control and drive modes, the driver assistance and safety tech on the TRX includes Jump Detection that acts to limit over-revving when the TRX is airborne. 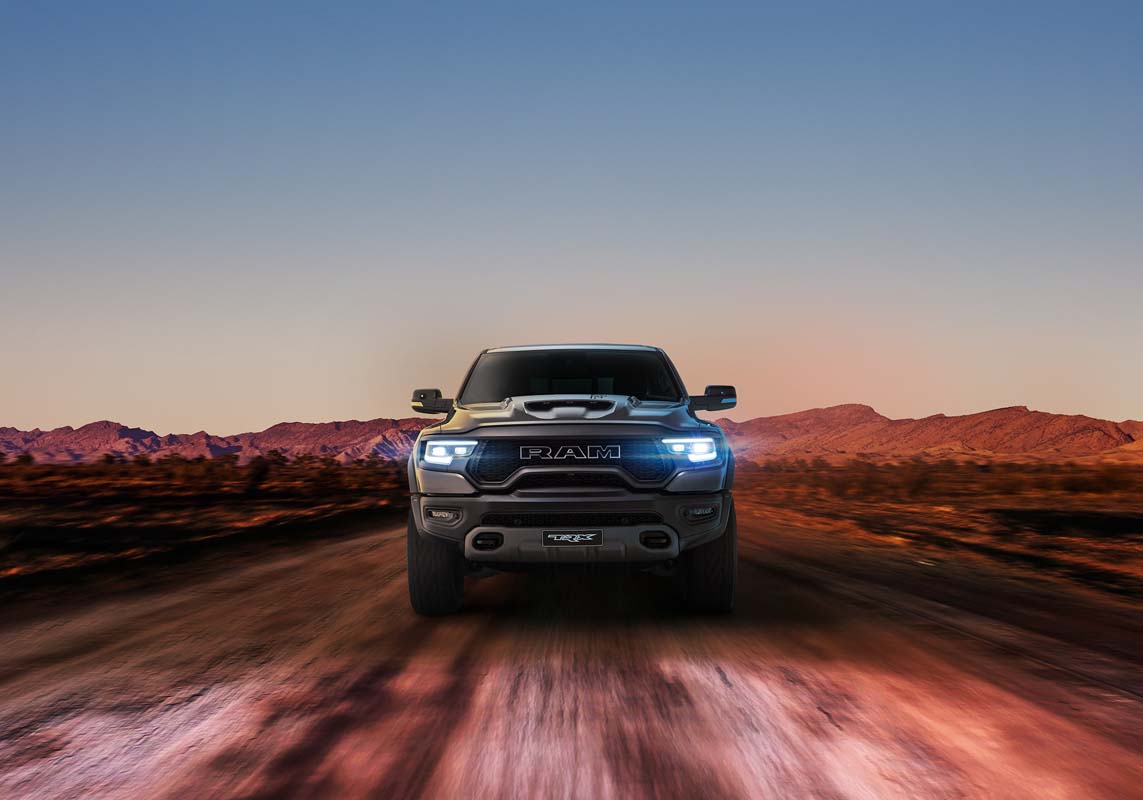 A 360-degree camera is supplemented with a forward-facing off-road camera to make navigating around obstacles on rough trails easier. 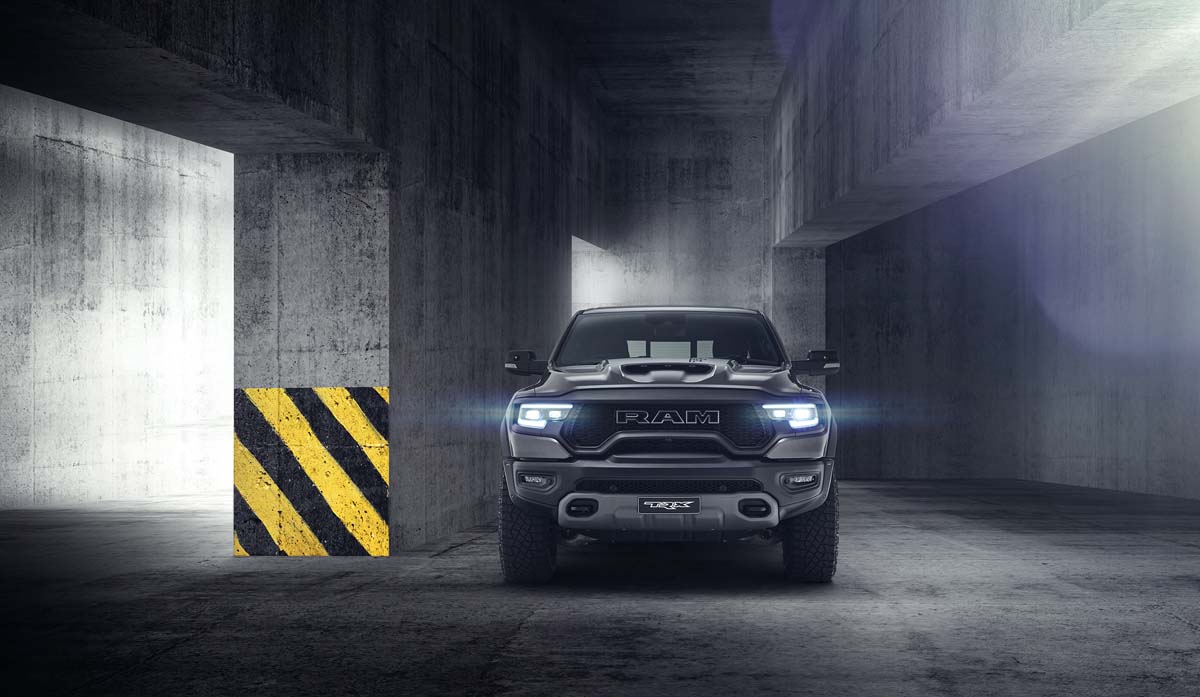 A panoramic sunroof is one of the few options available, adding $10,000 to the list price.

An actual arrival date for the TRX had not been confirmed at time of writing, so see your RAM dealer or go to: ramtrucks.com.au for more details.