V6-powered Dakar racer to be produced in limited numbers, priced in excess of AU$1.7 million.

The four-wheel drive, high-performance ‘Hunter’ racer developed by Prodrive in the UK and campaigned by Sebastien Loeb for Bahrain Raid Xtreme in the past two Dakar rallies, is now available in street-legal form. 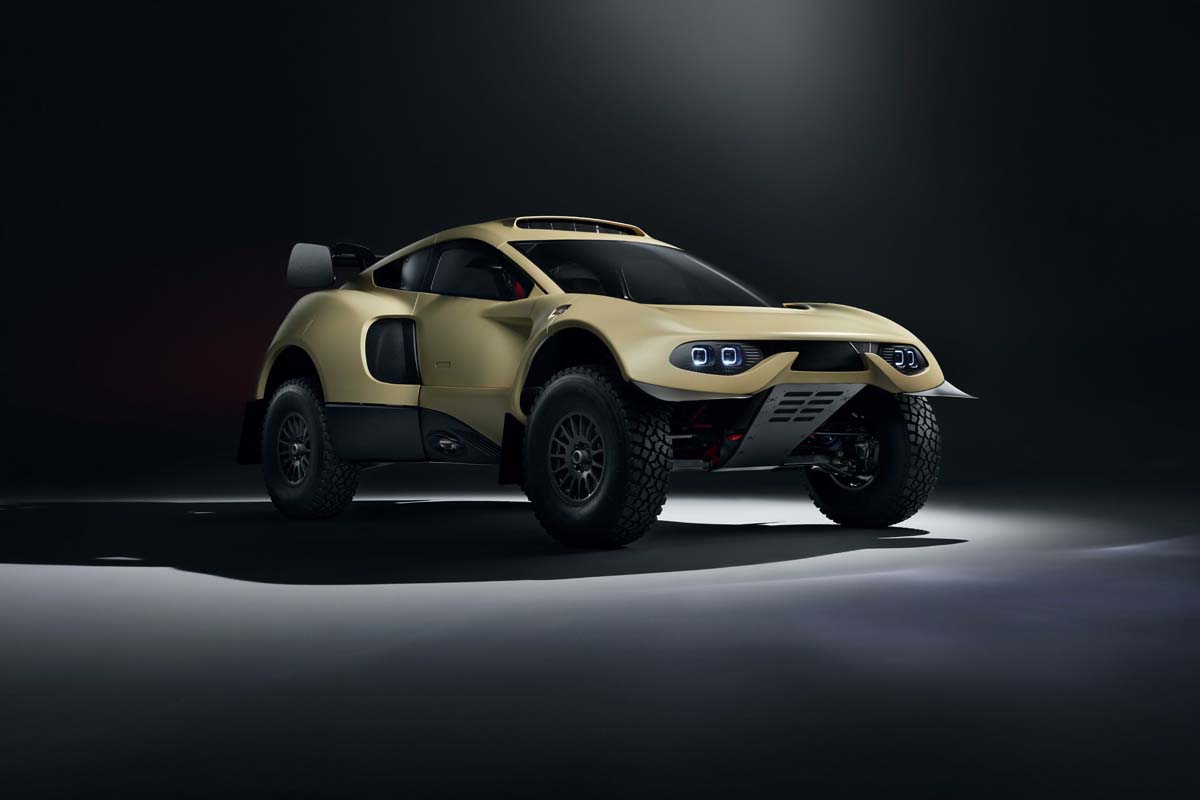 Unveiled on 16 March, the Prodrive Hunter is described as an all-terrain hypercar that, while registerable for road use in certain countries, offers unrivalled ability and performance across any landscape.

“There are numerous hypercars on the market, however they all need good roads or even race tracks to show their performance,” explained Prodrive chairman, David Richards.

“We identified that in certain parts of the world, particularly the Middle East, there are vast expanses still to be explored that go way beyond the access provided by asphalt roads. Therefore, why not create a vehicle that gives the opportunity to explore these regions with performance way beyond that offered by any off-road vehicle before.” 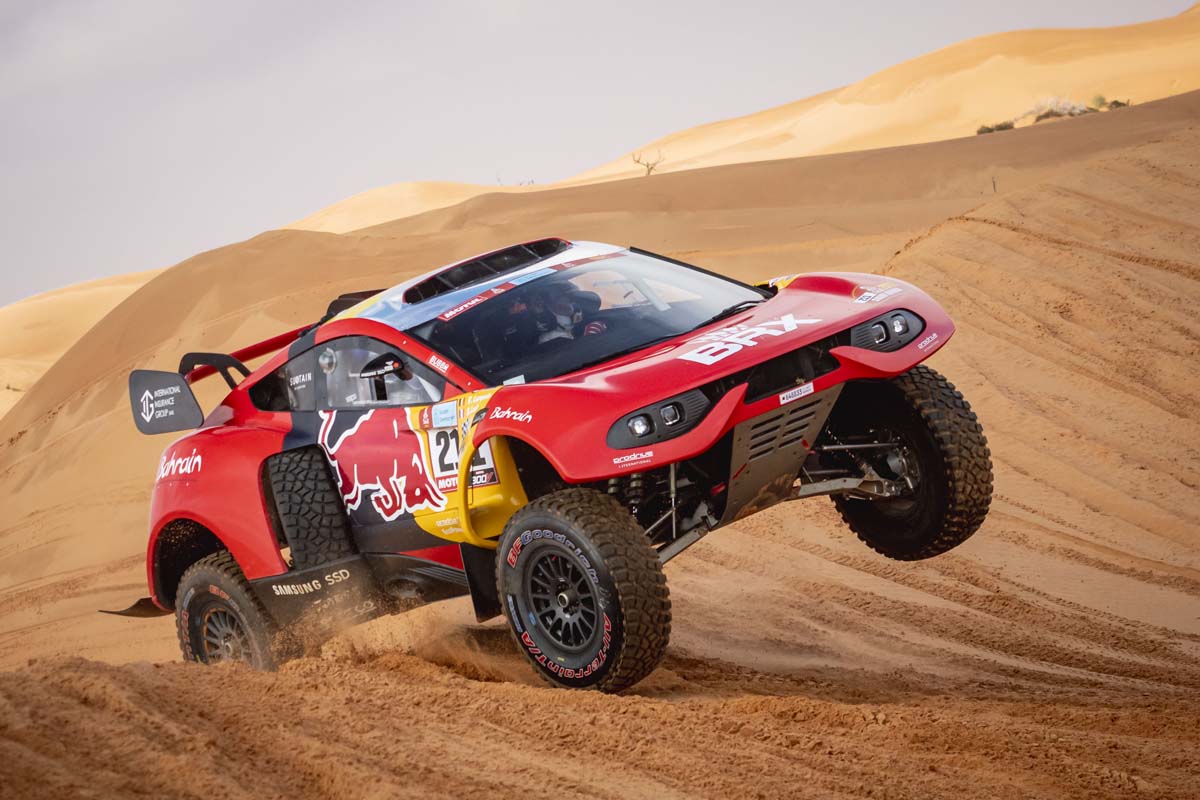 The road-legal Hunter Hypercar uses the same drivetrain and suspension as the Hunter Dakar racer, but where most competition cars are dialled down in terms of their performance when transferred to the road, the Hunter winds the wick up, with a claimed 50 per cent increase in power from the 3.5-litre V6 engine and more suspension travel, too. 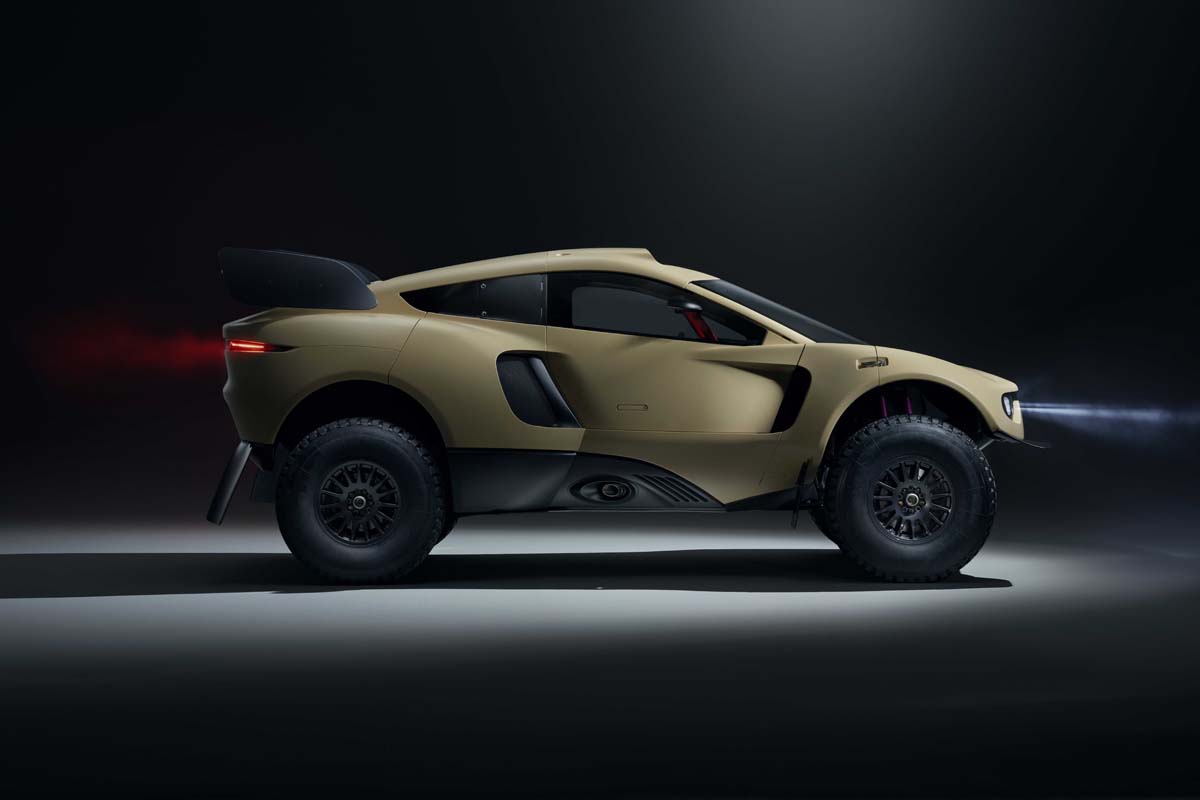 The Ford engine (the same unit used in the GT and F-150 Raptor) that powers the road and race Hunters features twin turbochargers and is virtually mid-mounted, sitting between the driver and front passenger. Delivering more than 445kW and 700Nm in road form, the increased output is claimed to make the Hunter smoother and easier to drive, too.

Instead of the sequential six-speed manual gearbox in the race version, there’s a paddle-shift automatic, but four-wheel drive remains, with lockable front, centre and rear diffs.

Without the constraints of Dakar’s T1+ class rules, Prodrive claim the roadgoing Hunter Hypercar is even faster than the race version, with a 0-100km/h time under 4.0 seconds, and while top speed isn’t listed, close to 300km/h has been estimated by some sources. 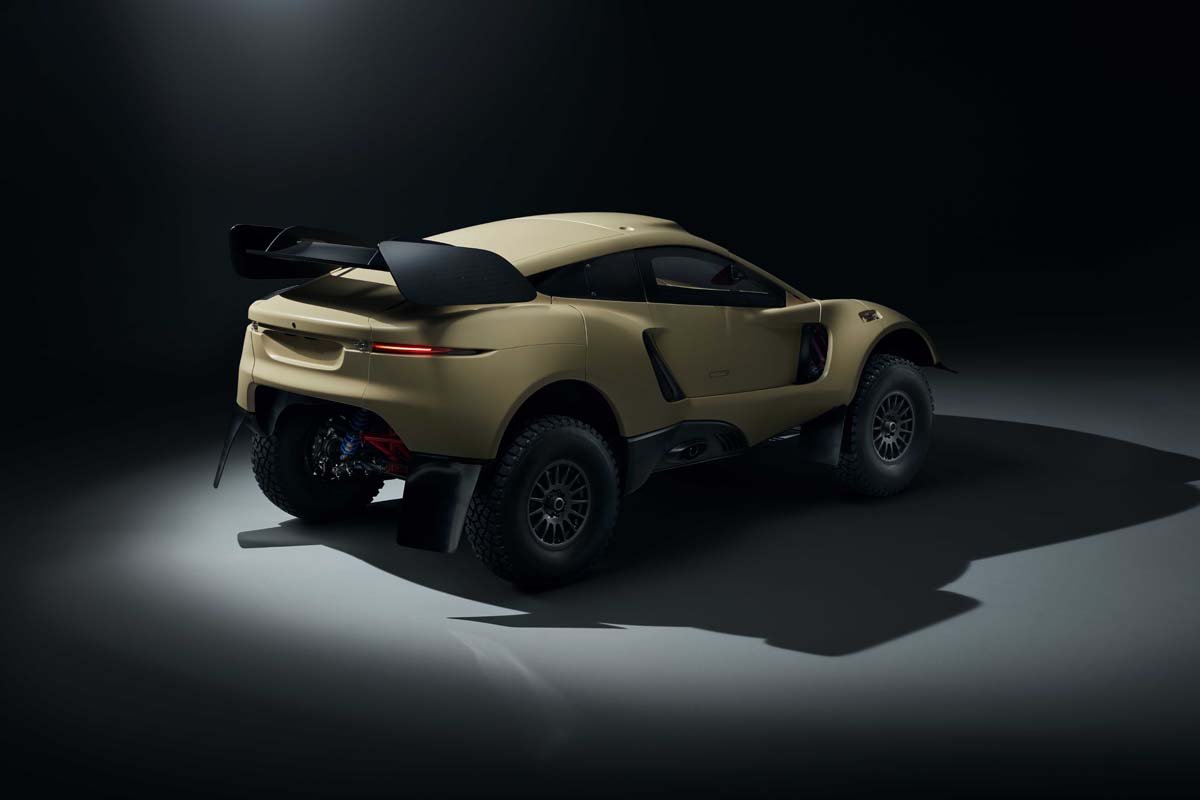 The engine sits in a chassis and surrounding roll cage made from high-strength steel tubing, to which carbon fibre composite body panels are attached, just like the racing Hunter.

While only 4600mm long and 1850mm high, the Hunter Hypercar is 2300mm wide. That’s wider than the original Hummer, so it’ll be a challenge to drive on some suburban roads, but that’s far less of a problem in this creation’s target market – the Middle East – than it is anywhere else. 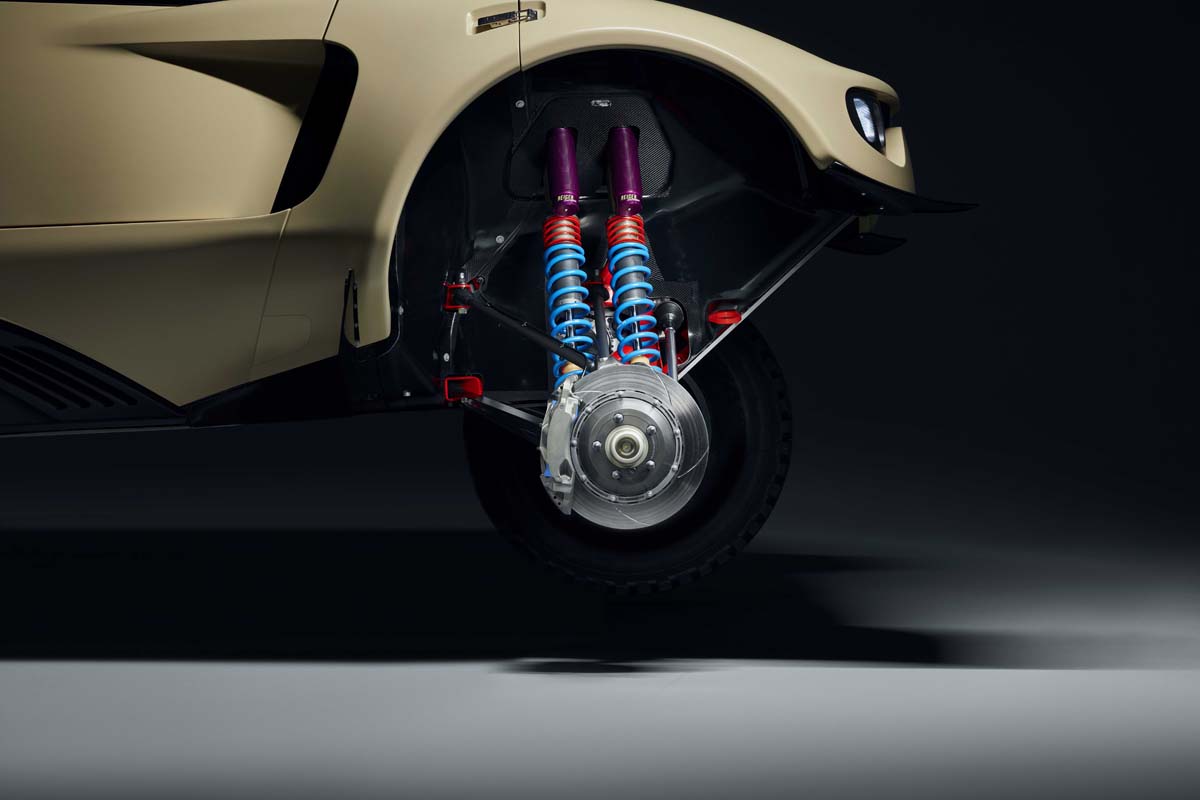 The racing suspension, made up of double wishbones with dual adjustable coilover dampers at each corner remains, with travel increased from 350mm to 400mm, which Prodrive claim delivers a smoother ride and improved off-road ability. The 35-inch off-road tyres on 17-inch wheels remain, too, which was a deliberate move on Prodrive’s part.

“It’s about giving owners the opportunity to experience what it is like to drive Loeb’s Dakar car across the desert, but with all the comforts of a road car and the ability to drive it from your home, through a city, to any destination of your choice,” Richards added.

There’s no ABS and brake disc size is unrevealed, but Prodrive say vented discs with six-piston calipers feature on each wheel. 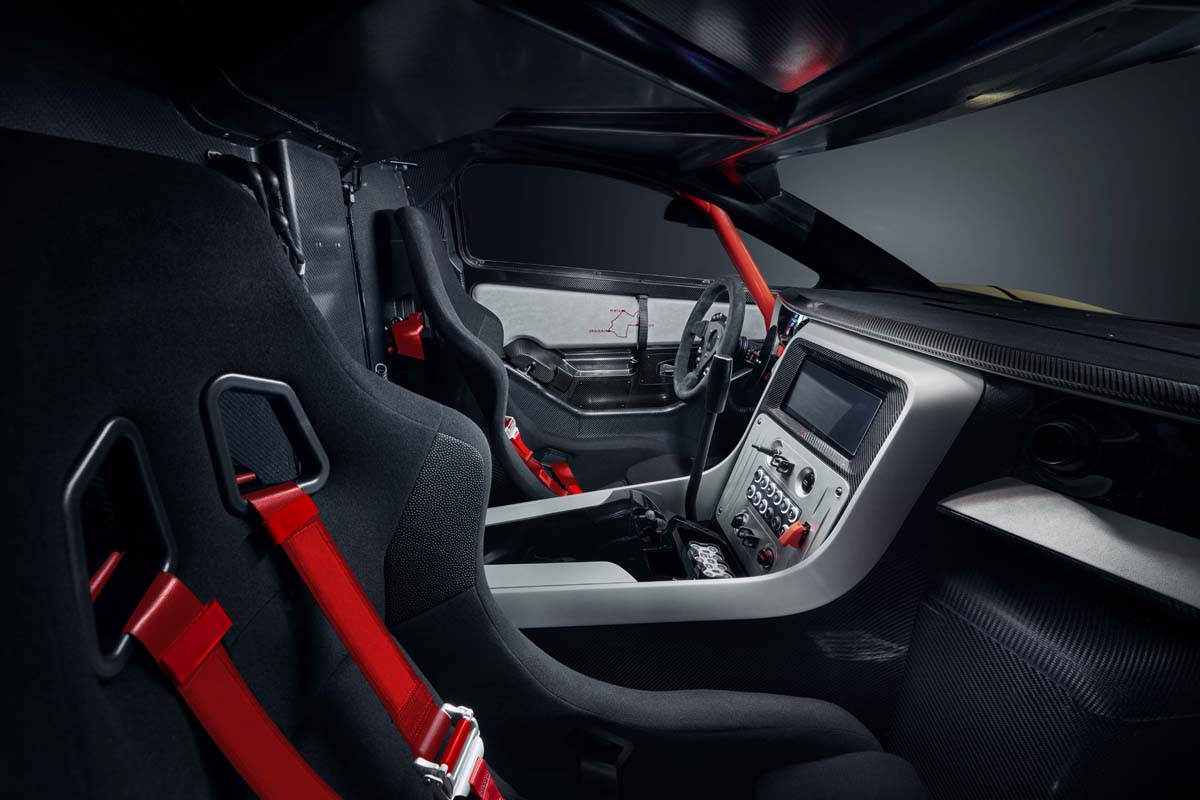 For all its performance improvements, the Hunter Hypercar is said to be more refined than the race version, with Ian Callum (who styled the exterior of the original racer) called in to design an interior more befitting everyday use.

A digital dash display has been added, along with more conventional centre console controls. The steering wheel is still a race-style unit, though, as are the carbon fibre racing seats with six-point harnesses. 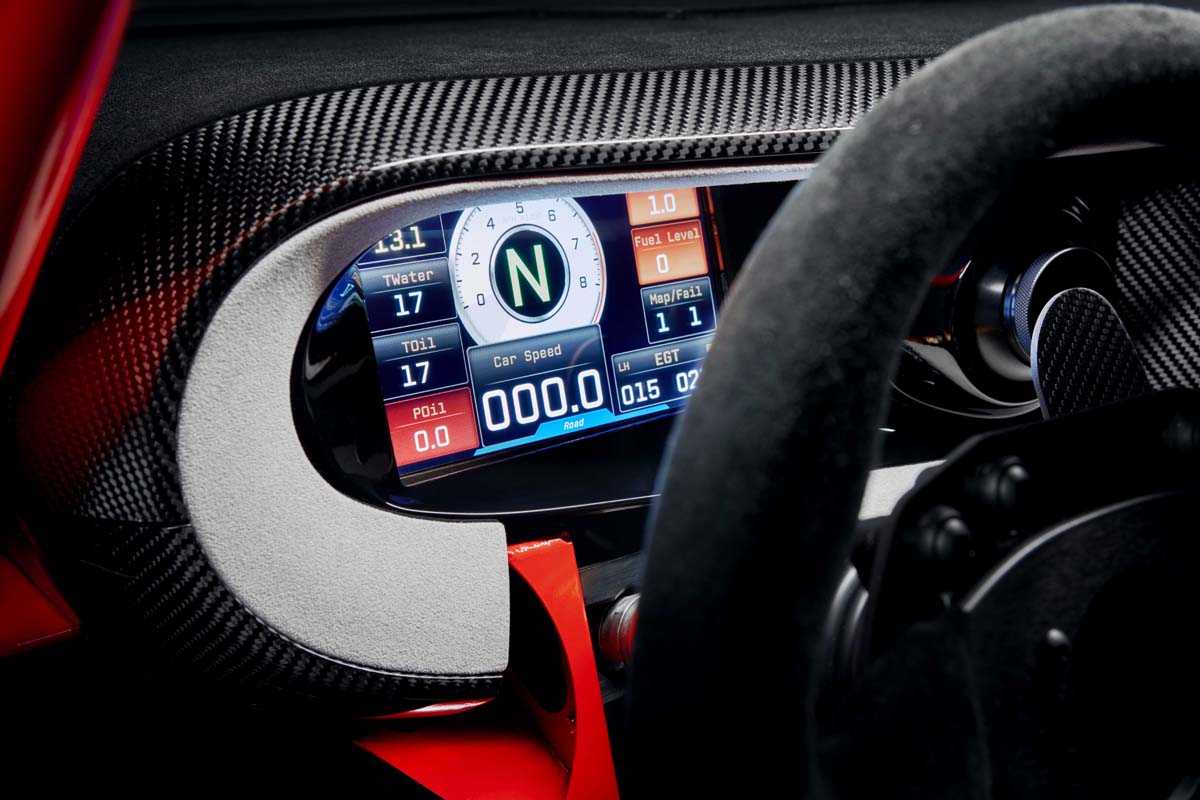 For long miles on the road – and off it – a 480-litre fuel cell is fitted aft of the seats, with provision for spare wheels alongside.

Production of the Hunter Hypercar will be limited to 25 units, each priced at £1.25 million (AU$1.78 million approx.), plus taxes.