Ford has previewed the new Ranger Raptor ahead of its Australian arrival later this year and are pretty bullish about the impact they expect it’ll make in the local market. A claim of “ultimate performance” from the upcoming model sounds bold, but a read through the features revealed so far show Ford have every right to be boastful… 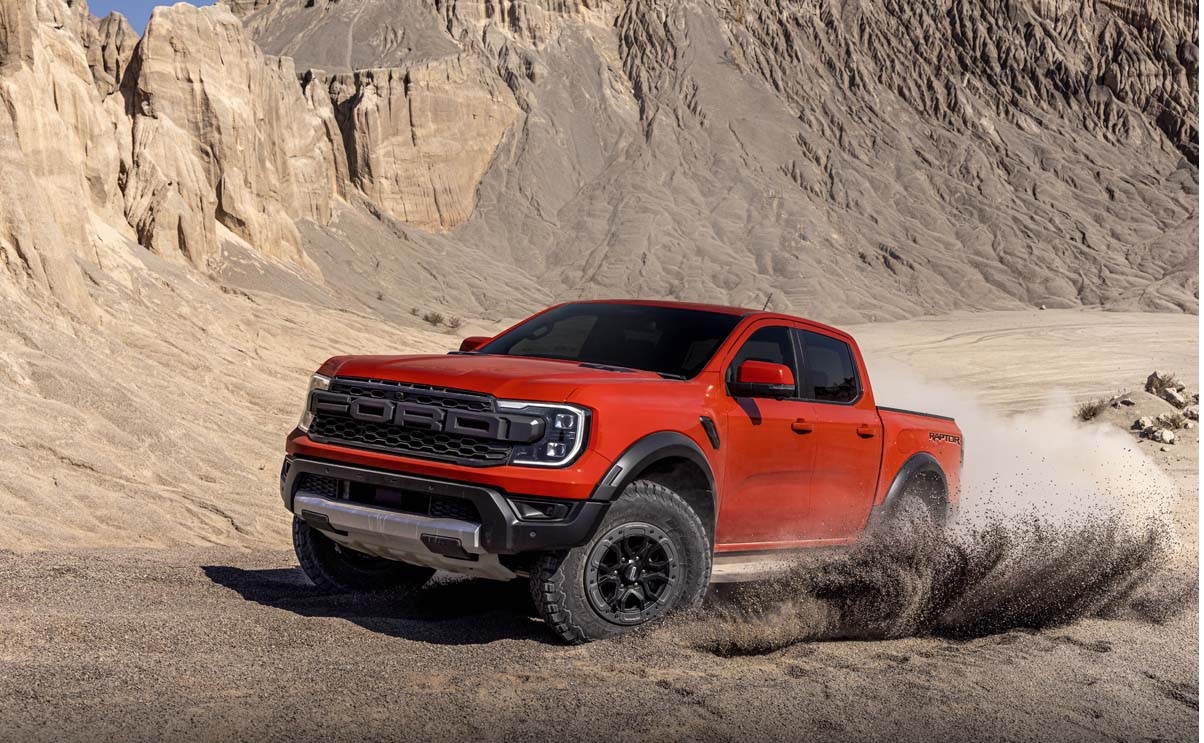 Like the upcoming Ranger, the new Ranger Raptor was developed by Ford’s Australian engineering and design teams, although manufacture will still be in Thailand.

Key changes over the current Raptor include replacing the diesel engine with a larger and much more powerful petrol motor, upgrading the suspension and four-wheel drive system, strengthening the body and bringing a more premium look and feel to the interior. 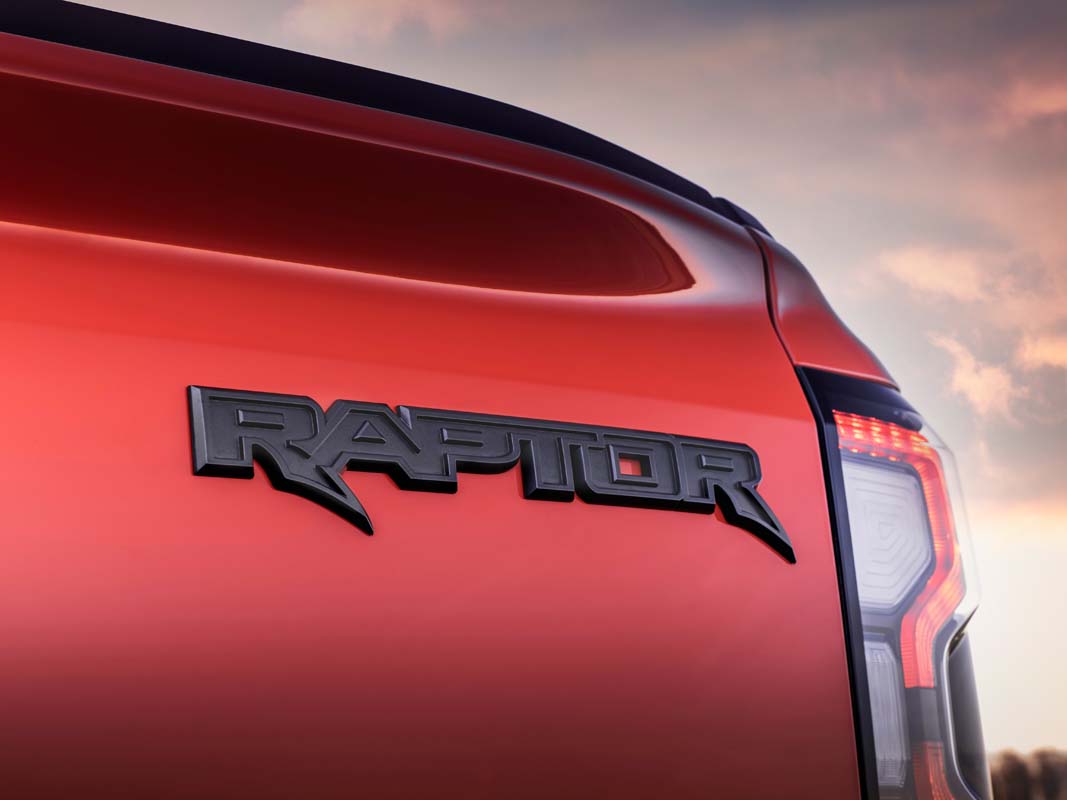 “It’s significantly faster, looks incredible, is packed with new features, and is the strongest ‘Built Ford Tough Ranger’ we’ve ever made.”

The 2.0-litre twin-turbo diesel four-cylinder engine is arguably the current Ranger Raptor’s weak point, lacking the power to match both the potential in the platform and the demands of customers. Ford have now addressed this with the introduction of a 3.0-litre twin-turbo petrol V6, which will be exclusive to the Raptor in the next-gen Ranger lineup.

Derived from Ford’s 2.7-litre EcoBoost petrol engine used in the Bronco and F-150, the extra capacity comes via increases in bore and stroke, with claimed maximum outputs of 292kW at 583Nm at 3500rpm in 3.0-litre form. That puts the current twin-turbo diesel four in the shade with its 157kW and 500Nm.

Those 292kW/583Nm maximums will make the upcoming Raptor the most powerful ute in its class, outpointing the Amarok 580 V6 on torque and marginally more powerful than even the much larger RAM 1500, which needs a 5.7-litre V8 to achieve almost the same power. 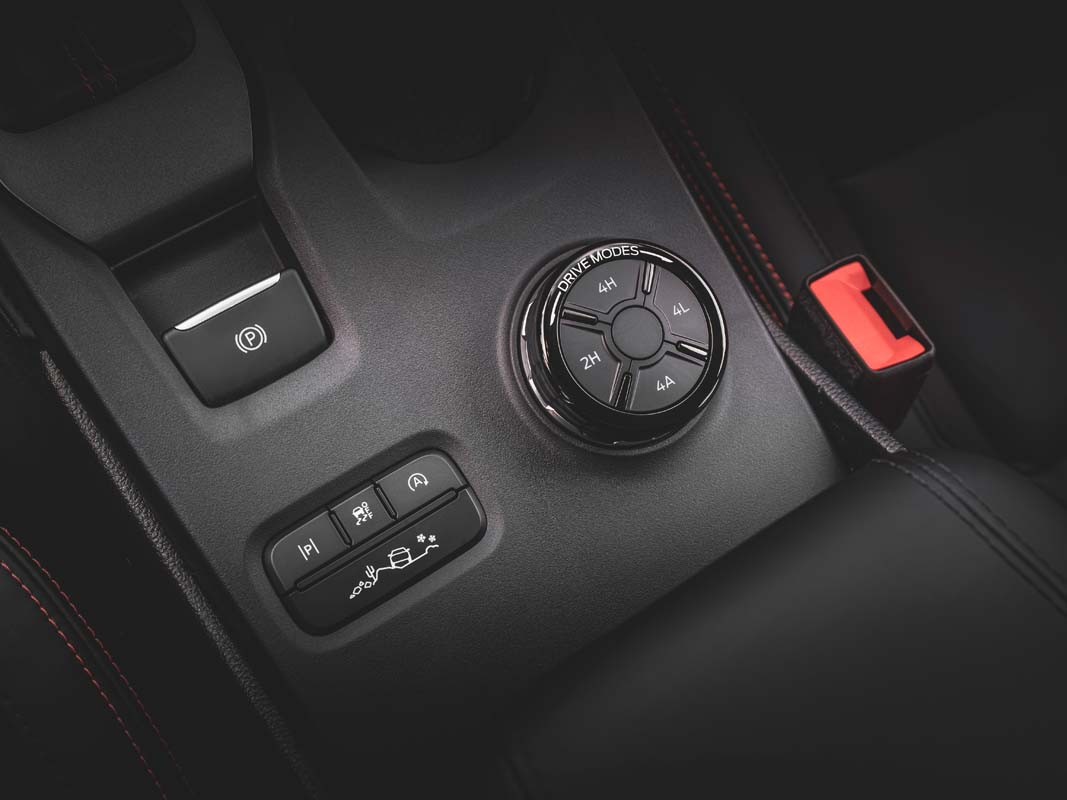 Even though 0-100km/h time hasn’t been revealed yet, the Raptor will most likely be the fastest ute in its class, too.

The caveat in achieving these maximums is that 98 octane unleaded petrol is required. The minimum fuel requirement is 95 octane premium unleaded.

“The 3.0-litre brings a different dynamic to the Ranger Raptor that will satisfy even the most hardcore performance enthusiast,” Burn added. “The acceleration and raw performance of the new powertrain leaves you grinning from ear to ear.”

The engine block is cast from compacted graphite-iron, which Ford says is 75 per cent stronger than regular cast iron and stiffer as well. 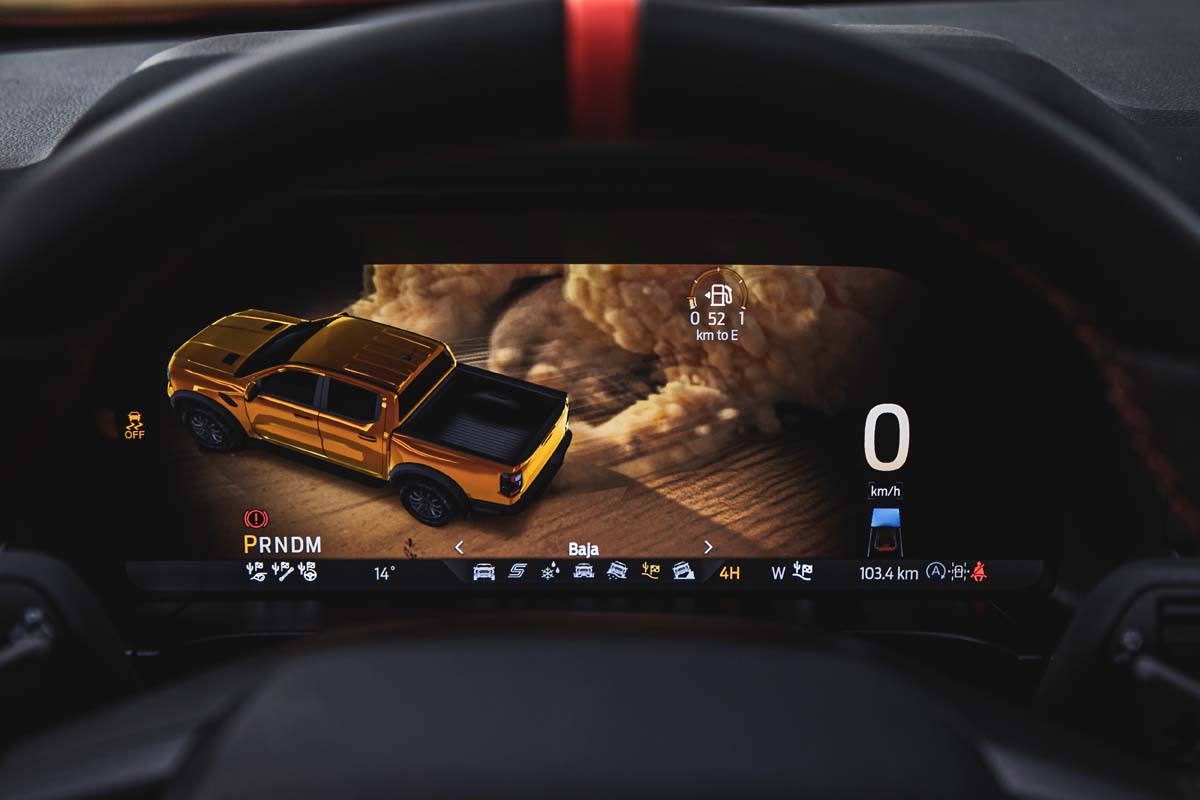 To reduce turbo lag, Ford have developed an anti-lag system that keeps the turbochargers spinning for up to three seconds after the throttle is eased off, allowing for faster resumption of acceleration, when exiting a corner or shifting gears, for example.

This function is only available in ‘Baja’ mode, which, as well as being one of seven driving modes, is also one of four exhaust modes.

Other modes include ‘Quiet,’ ‘Normal’ and ‘Sport,’ which are self-explanatory and adjust the note of the 2.5-inch active exhaust system accordingly. Baja virtually eliminates the baffles, but it should be noted that this mode is intended for off-road use only.

The 10-speed automatic with paddle shift controls carries over from the current Ranger Raptor and will be the only transmission offered on the new version, but it has been re-tuned to suit the new V6, while software upgrades mean that each gear will also have its own boost profile.

All Four, All the Time

A two-speed transfer case will remain on the upcoming Ranger Raptor, but it’s upgraded to an electronically-controlled unit. Combined with locking front and rear diffs as standard, as well as selected chassis upgrades, it means that, across the available 2H, 4H, 4A and 4L modes, default operation will be 4A four-wheel drive auto, rather than 2H on the old Raptor’s part-time 4WD system.

A total of seven drive modes will be offered, each with differing levels of intervention in terms of the throttle response, traction control, transmission shift points and steering response. 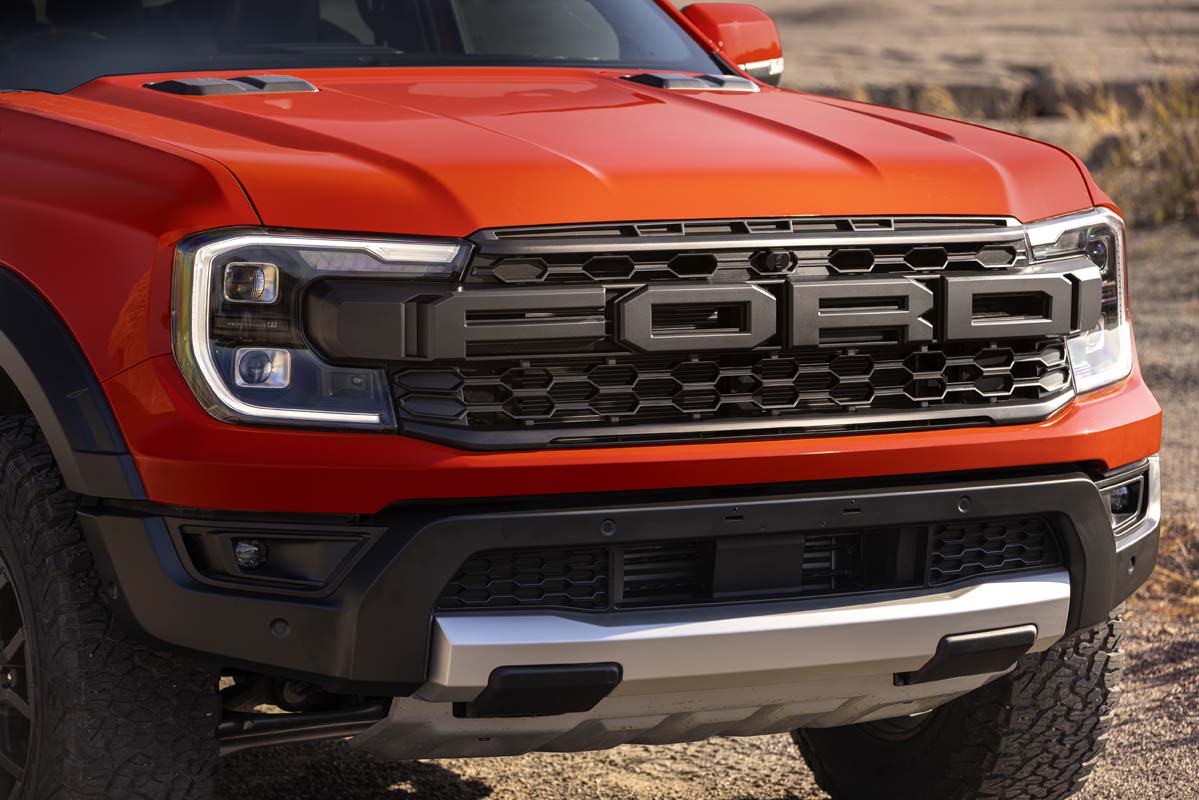 The ‘Normal,’ ‘Sport’ and ‘Slippery’ modes are road-focussed, with the latter designed to handle greasy bitumen and muddy trails.

Above these are the off-road modes of ‘Rock Crawl,’ ‘Sand,’ ‘Mud/Ruts’ and ‘Baja’. Rock Crawl is designed to provide optimum traction and momentum when tackling the toughest terrain at ultra-low speeds. Sand is pretty self-explanatory and also applies to snow. Mud/Ruts puts the focus on grip and maintaining momentum when plowing through bogholes and extreme muddy terrain. 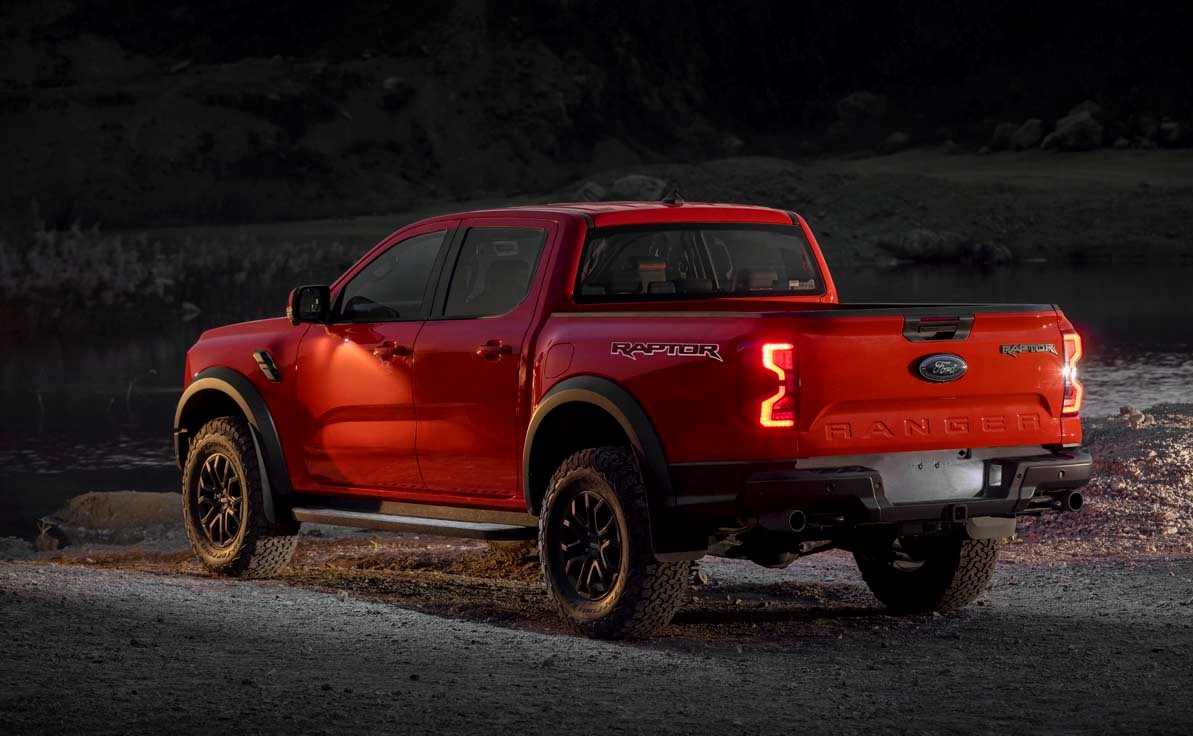 Baja is the top of the tree and essentially a high-speed race mode with, as Ford puts it, “all systems set for maximum attack”.

“We really wanted the Baja mode to be the ultimate expression of off-road high-speed capability,” Ford’s Dave Burn explained. “It’s a feature at the core of what the Ranger Raptor customer expects.”

The multiple drive modes expand the new Ranger Raptor’s capabilities, which was a goal during development.

“While the Ranger Raptor was inspired by desert racing, it’s also a supremely capable overlanding vehicle. Out of the box, we’ve created an off-road vehicle that you don’t need to modify to get you where you need to go and back again safely.” 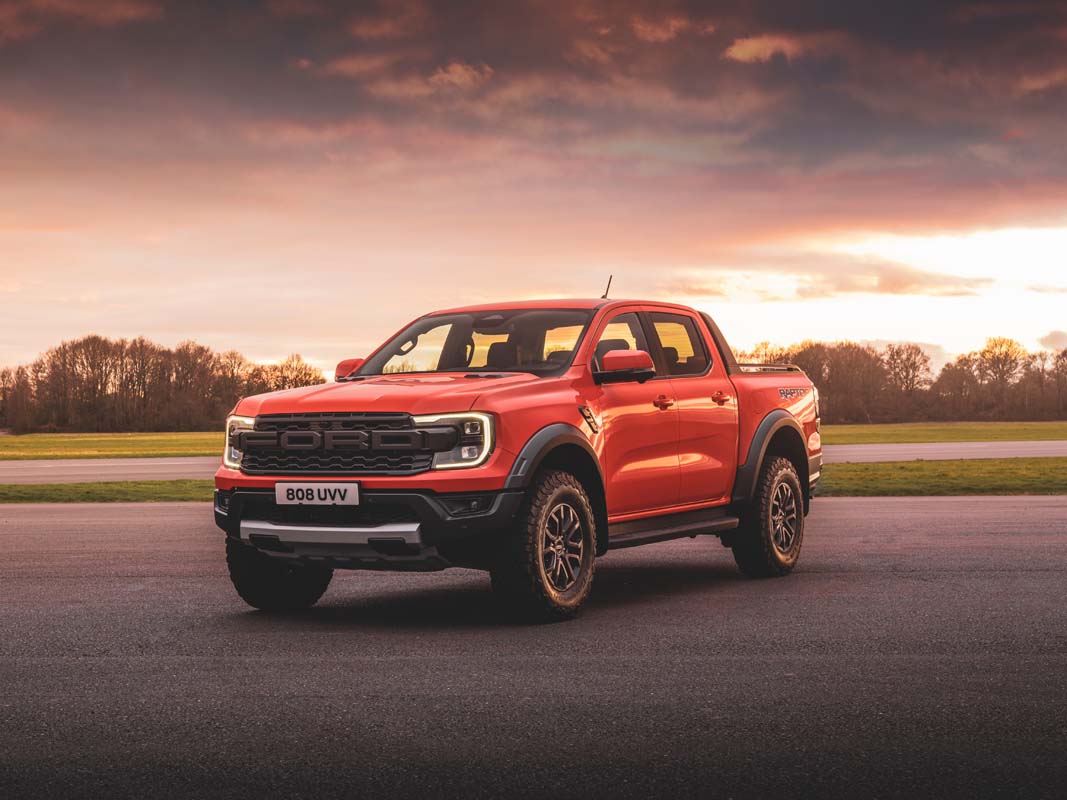 Another feature of note is ‘Trail Control,’ which is a form of off-road cruise control and designed to modulate acceleration and braking at speeds under 32km/h without driver input, so he/she can concentrate on steering and obstacle avoidance. Engaged manually, Trail Control automatically disengages above 32km/h.

While the powerful twin-turbo petrol V6 will get most of the attention in the new Ranger Raptor, the changes in chassis and suspension are just as significant, and more importantly, enable all that extra power to be utilised to best effect.

The chassis is a different unit to that which underpins the new Ranger, with reinforcements in key areas, different mounting points for various elements and unique frames for items like the jounce bumpers, front shock towers and rear shock brackets. 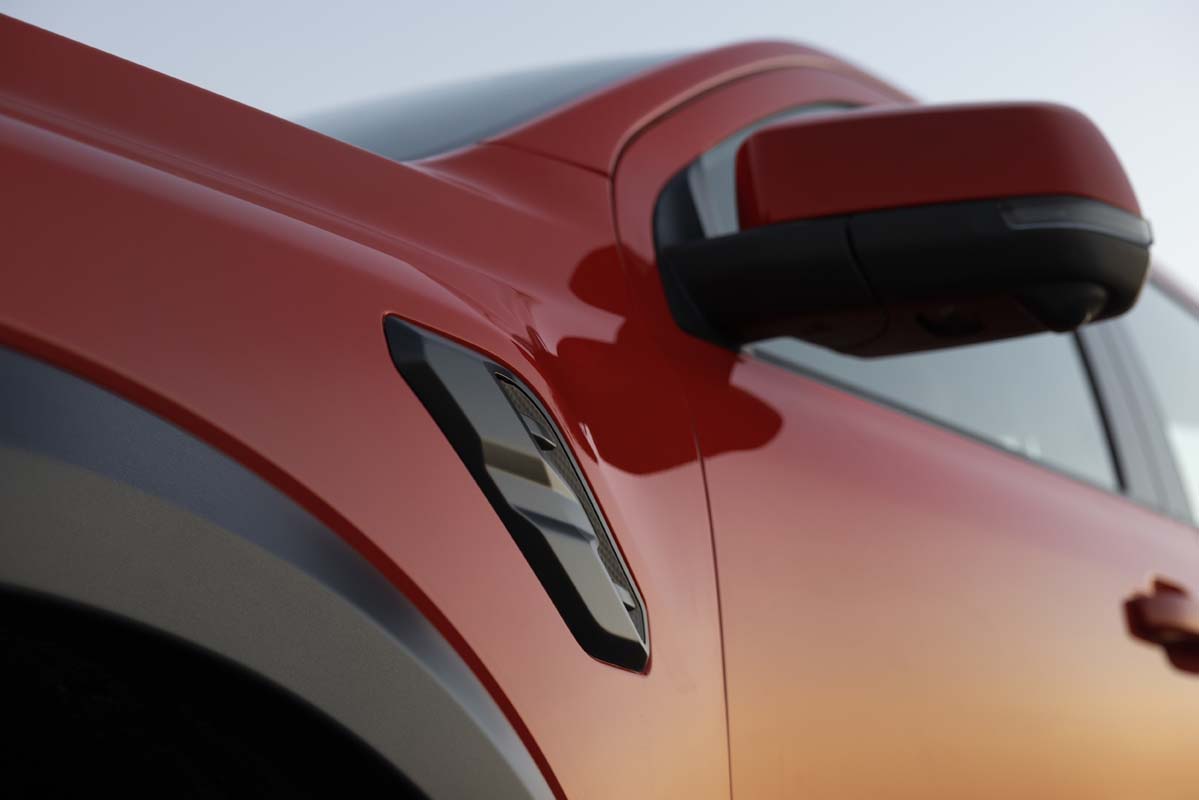 Ford says all these changes have been made to ensure the new Ranger Raptor can handle extreme off-road work.

In terms of the suspension configuration, the new Ranger Raptor is mostly the same as the current one, made up of heavy-duty upper and lower control arms at the front, with a Watts linkage set-up and coil springs at the rear, but both have been redesigned.

The FOX shocks at each corner are the same size as the current model, but their internals have been modified and feature a Teflon-infused oil that reduces operating friction by approximately 50 per cent compared to the shocks on the current Raptor. 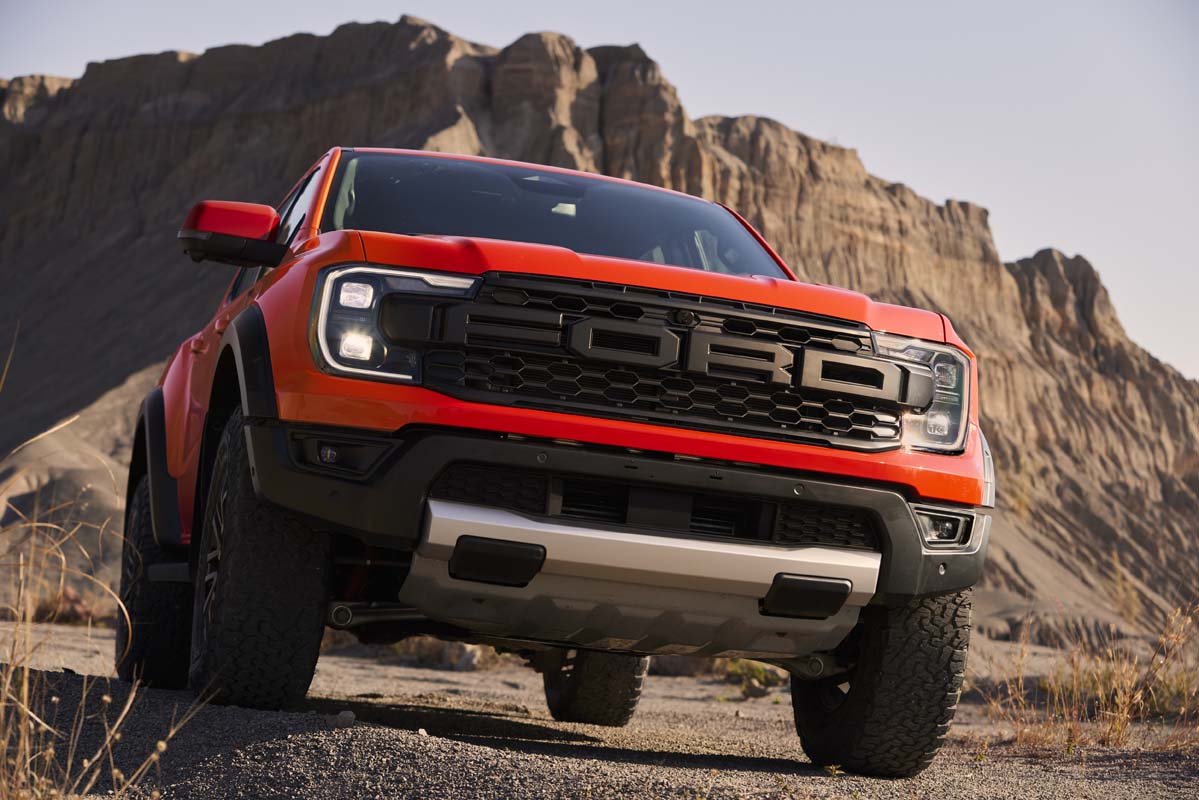 With their ‘Live Valve Internal Bypass’ technology, these shocks offer position-sensitive damping, as well as FOX’s own Bottom-Out Control that maximises damping force in the bottom 25 per cent of the shock’s travel.

While very capable out of the box, the shocks and matching springs have been tuned by Ford Performance to suit the new Raptor and offer electronic adjustability for what Ford claim is the perfect balance between comfort, control, stability and traction – both on-road and off-road.

More specifically, on-road comfort and off-road ride quality are said to be improved as a result of this tuning when compared to the current Raptor.

Underbody protection includes a 2.3mm thick steel bash plate that covers almost double the area of the plate on the standard Ranger and designed to protect the radiator, front diff, sump and steering gear. For additional protection, engine and transfer case shielding is also standard, along with dual tow hooks at each end.

The design of the new Ranger Raptor is in line with that of the new Ranger that was previewed back in November, but retains signature styling cues, including the large FORD identification in the grille and its own front bumper design.

The Matrix LED “C-clamp” headlights applied to the next-gen Ranger and already in use on some other Ford models in the US will also feature on the Ranger Raptor. These lights offer auto dynamic levelling and speed-dependent brightness, static and dynamic bending ability, as well as glare-free high beam functions.

While the front bumper and vents in the front guards have been redesigned, the standard Ranger and Ranger Raptor bodies are almost identical from the A-pillar back, with what appears to be the same rear quarters, sports bar, tub rails, LED tail lights, tailgate and bumper.

More pronounced wheelarch flares are one of the few obvious visual differences, while the Raptor gets its own sidestep design and deletes the lower step incorporated into the bumper to maintain departure angle.

A choice of two 17-inch wheel designs will be offered, including one with beadlock capability, while the BF Goodrich All-Terrain KO2 tyres from the current Raptor will be standard, regardless of wheel choice.

Inside, updated trim and detailing for the new Ranger Raptor includes “jet fighter-inspired” sports seats front and rear that are designed to be more comfortable and more supportive during aggressive driving.

A new interior treatment called ‘Code Orange’ sees a deep red-orange colour applied to selected areas, including the dash, seats and a race-style 12 O’Clock marker on the steering wheel.

No information on the Ranger Raptor’s safety suite was provided in February’s initial release of information, but it’s expected to get the same tech as upper-level versions of the Ranger, including new standard features that are coming with the next-generation version. 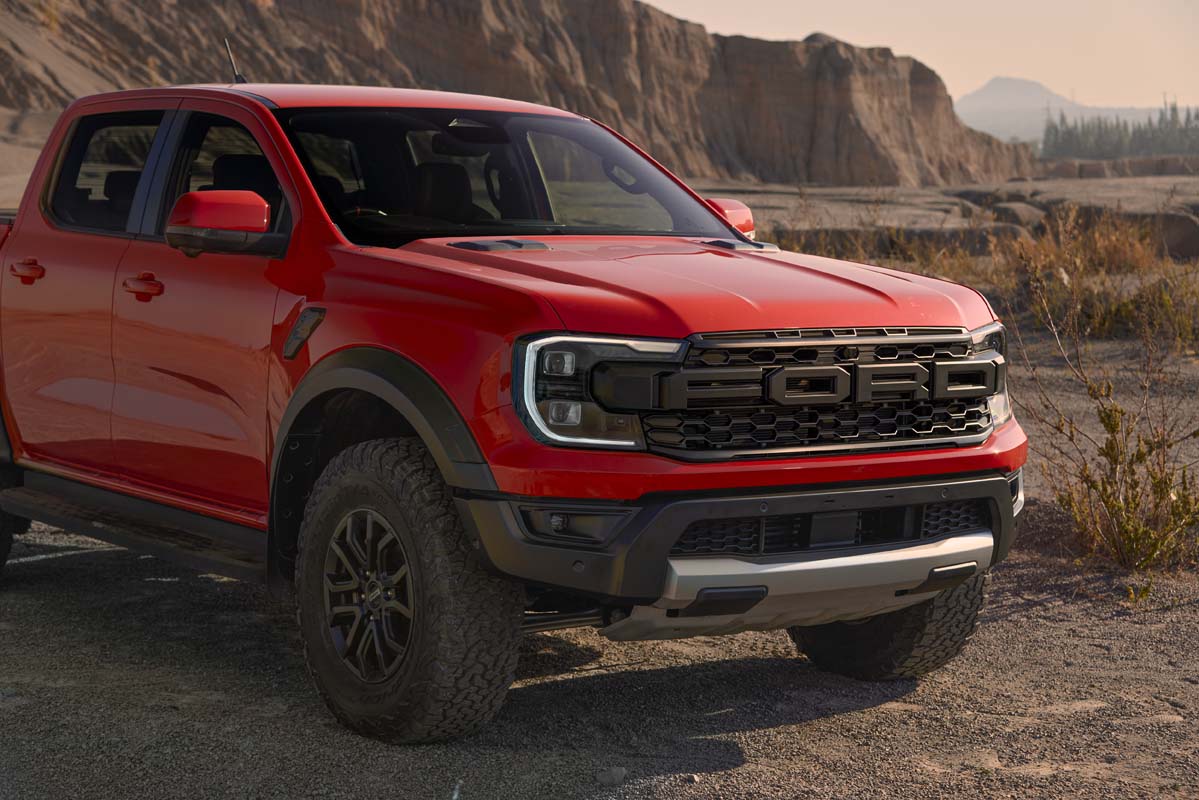 While the next-gen Ranger is due here by the middle of 2022, the Ranger Raptor isn’t expected to reach Australia until the end of the year, which makes it likely that the first local units will be plated as 2023 models.

More details are still to come, including towing and payload capacity, fuel economy, approach/departure/breakover angles and other specs, as well as available options.

Pricing is unknown at time of writing, too, but with the current PX MkIII Ranger Raptor listing for $77,690 + ORCs, the new version is expected to be in excess of that, maybe in the mid-$80K range for a driveaway price that could be as much as $90,000.