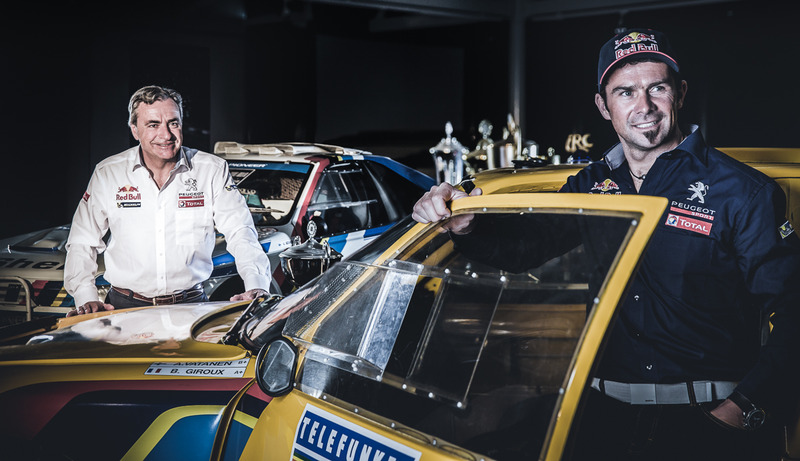 Sainz, the 2010 Dakar victor, brings extensive experience and car-development skills to the table, while Despres is a five-time Dakar winner on two wheels who has chosen Peugeot to kick off a new career on four wheels.
After being out of the iconic Dakar rally for 25 years, Peugeot have announced they will return to the gruelling 10,000km enduro in 2015, with a "superteam" made up of past Dakar winners Carlos Sainz and Cyril Despres.

Sainz, the 2010 Dakar victor, brings extensive experience and car-development skills to the table, while Despres is a five-time Dakar winner on two wheels who has chosen Peugeot to kick off a new career on four wheels.

The Peugeot Sport, Red Bull and Total joint effort comes on the back of the French manufacturer's success at last year's Pikes Peak International Hillclimb event, where the 208 T16 Pikes Peak driven by Sebastien Loeb smashed the course record.

At Dakar, Sainz and Despres will drive the '2008 DKR' a heavily-modified, race-prepped version of Peugeot's 2008 compact SUV. Car details are still under wraps at the moment, with more information about the car to be revealed at the Beijing Motor Show on April 20, followed by the new enduro racers' competition debut at a tarmac rally this June.

With their return to the Dakar, Peugeot no doubt hope to repeat the success they enjoyed in the 1980s, which included four successive wins from 1987 to 1990, first with the 205 T16 Grand Raid, then with the equally iconic 405 T16 Grand Raid.

Dakar will be the chief focus of Peugeot's new, multiyear program, which will also include a certain number of other events in order to help it to prepare for the annual South American marathon.

What made you decide to join Peugeot?
"I have often competed against Peugeot Sport in the past and I have known for years just how passionate it is about motorsport. I also know that when they decide on a programme, they put everything into it. I'm the same. Given how much I love the Dakar, it was too good a proposal to resist when Peugeot asked me to be part of its line-up for its comeback to this unique adventure."

Peugeot hasn't done the Dakar for 25 years. Do you see that as a handicap?
"I don't think so, because Peugeot has never stopped making cars of a very high standard for disciplines like rallying and endurance racing. The new 208 T16 R5 is a fine example. At the same time, I have already won the Dakar and I will be able to bring my own experience of the event in four-wheel and two-wheel drive cars to the table. We are ready for the challenge."

Do you believe the team can be competitive quickly?
"In motorsport, you can never take anything for granted. The level of competition on the Dakar today is very high and it's an event that really isn't easy to win. We won't have much time before our first attempt, either, but I feel confident because the team is clearly extremely motivated and we will work hard to try to win."

You enjoyed a highly successful career as a biker, with five Dakar wins to your name. Why have you decided to switch to four wheels?
"It was a natural process. When you do the Dakar on a motorbike, you can spend up to 10 hours on your own every day, so you have plenty of time to reflect on different things. In fact, the idea dawned on me during last January's Dakar, then Peugeot and Red Bull came up with this incredible opportunity. I am very proud. I didn't take me long to weigh up the pros and the cons! For me, it's a dream come true and the beginning of a new life."

How are you approaching this new challenge?
"I am aware that this is a tremendous opportunity to join the car guys at the sharp end, and with a competitive and professional team like Peugeot. I'm not sure I would have made the same jump for another team. I have strong recollections of Peugeot winning the Dakar when I was a kid and I can't wait
to get a chance to drive the new car…"

Certain successful bikers have gone on to win the Dakar on four wheels. What is your objective?
"To begin with, my aim will be to learn and help as much as I can. I should be able to make good progress in a team like Peugeot and with a teammate like Carlos Sainz. That's so stimulating. I really want to familiarise myself with the way these cars function and how to drive them, as well as with how to work with a co-driver. Sharing so much time with someone sitting next to you will be difficult because I've been accustomed to being on my own for the past 15 years!"

Peugeot and the Dakar: a taste for adventure
Peugeot's relationship with the Dakar in the past extends well beyond the cold, if impressive statistic of its score of four victories from four starts. On the contrary, it is founded on the many, occasional improbable-sounding tales the French make has to tell after contesting some 48,125km of competitive
action in northwest Africa between 1987 and 1990…

On January 1, 1987, all the ingredients were in place to maximise Peugeot's chances of success on the 'Paris-Alger-Dakar' at first attempt. Its driver line-up included a certain Ari Vatanen whose 205 Turbo 16 was fittingly allocated number '205', an ideal way of promoting the brand's emblematic model. Unfortunately, an accident on the event's short Prologue near Paris saw his car suffer serious damage and the Peugeot star fell to a lowly 274th overall! The rally had only just started, but the incident provided the team with a timely reminder of the Dakar's uncompromising nature, however accustomed Peugeot Sport may have been to the ups and downs inherent in rallysport. Days later, team-mate Shekhar Mehta learned the same lesson while leading when the carefully-prepared game plan for his 205 T16 was spoilt by an inexplicable engine problem. Thankfully, Ari Vatanen's thrilling fight-back enabled him to recover top spot and eventually collect Peugeot's first Dakar triumph after some 13,000 kilometres of competition.

The 1988 event served to confirm the famous rally-raids unpredictability when an unbelievable misadventure troubled the plans of then Team Principal Jean Todt & the best-placed of the two 405 T16s which were entrusted with defending's Peugeot's colours. After 13 stages, Ari Vatanen arrived in Mali's capital Bamako in front, but his 405 T16 was stolen during the night! It was eventually recovered but too late & the Finn was disqualified. The win eventually went to the 205 T16 of teammate Juha Kankkunen who had been recruited to serve as Vatanen's rapid assistance driver!

The 405 T16 Grand Raid finally got its chance in 1989 after an enthralling battle between team-mates Ari Vatanen and Jacky Ickx. To make sure their duel didn't end in tears and scupper Peugeot's chances, the team decided to settle the issue by tossing a coin at the overnight halt in Gao, Mali. The result favoured Ari Vatanen who went on to claim victory, despite rolling twice.

The following year, the Finn managed to build up a safety margin of two hours at the top of the order, which was just as well since he had a troubled day on the leg from Niamey and Gao, again in Mali. The stage placed the emphasis on navigational skills, but Vatanen's codriver was poorly and his compass was
faulty. To crown it all, the Peugeot driver punched a big hole in the bodywork of his 405 when he hit a tree! That failed to faze the Finn, however, and he survived to collect Peugeot's fourth straight Dakar win. 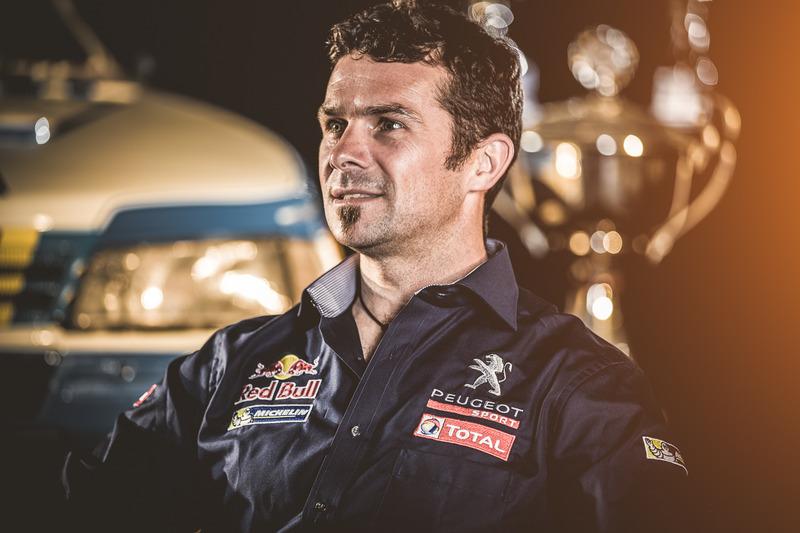 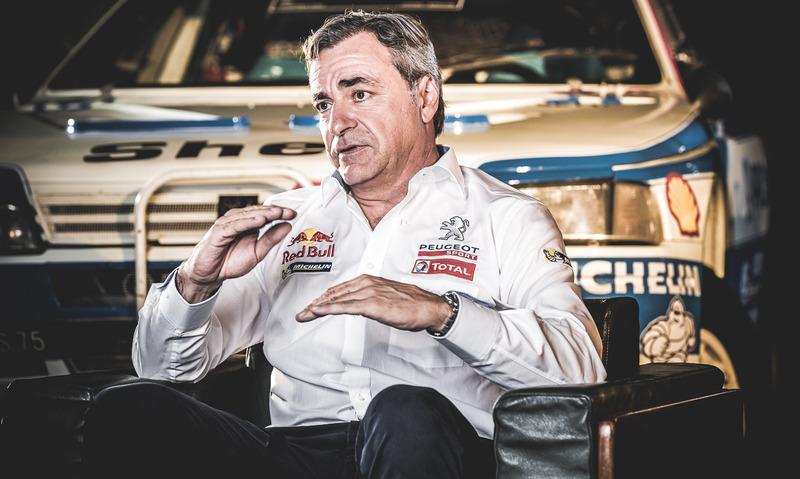 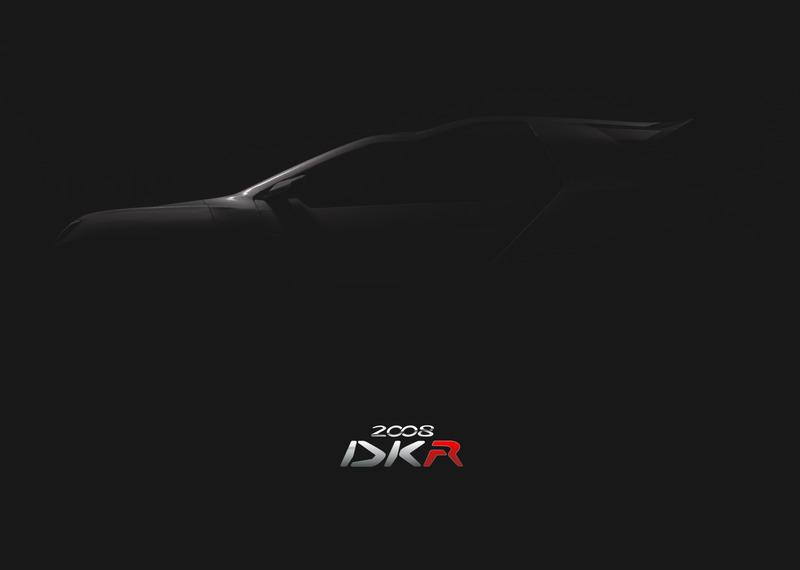