Land Rover have taken the covers of the new, fifth-generation version of their Range Rover, with the benchmark for luxury 4x4s taken to the next level. 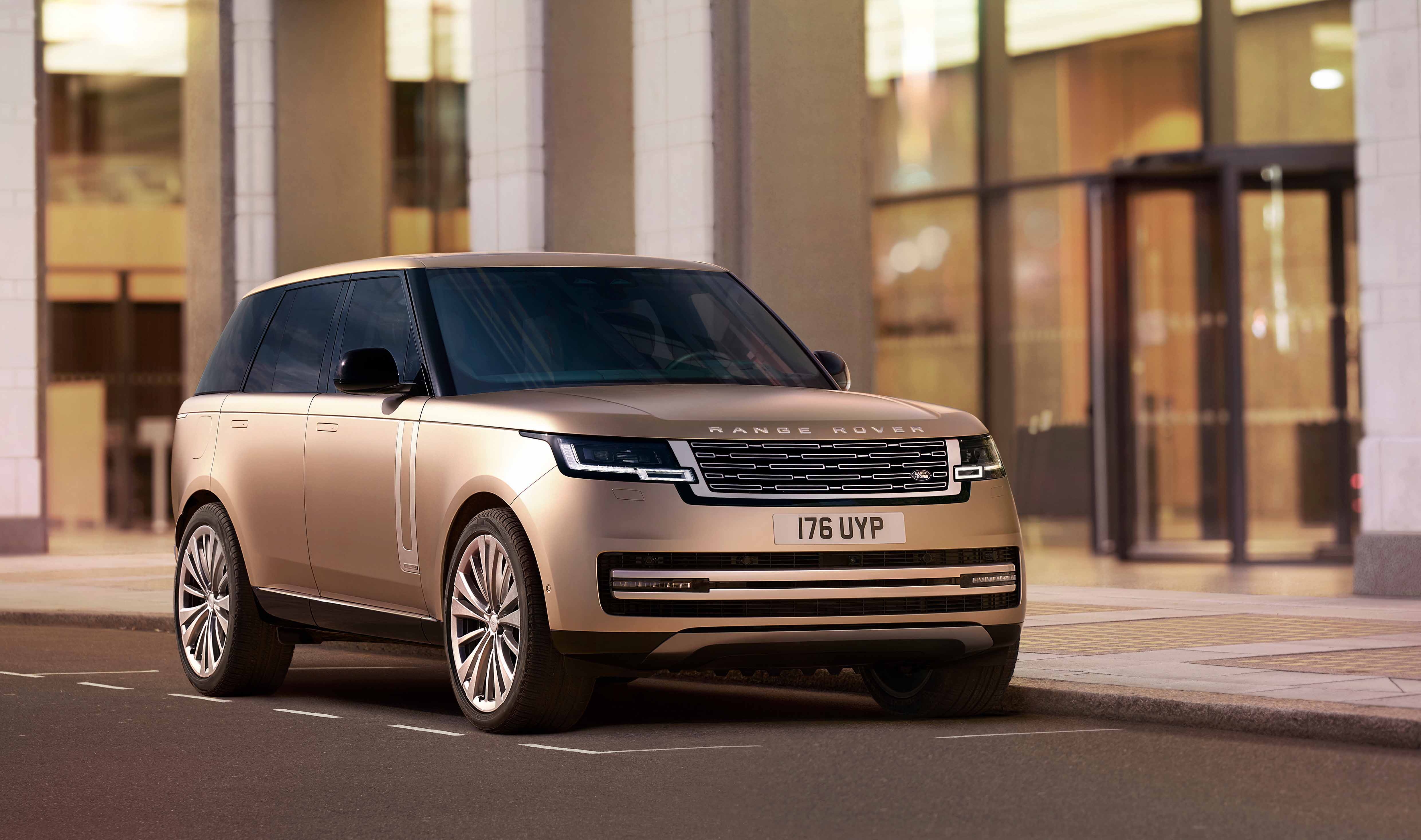 While staying true to its heritage as a premium 4x4, the new Range Rover also looks to the future, with mild hybrid and plug-in hybrid options offered on the units to reach Australia next year, while a fully electric version is planned for release in 2024. 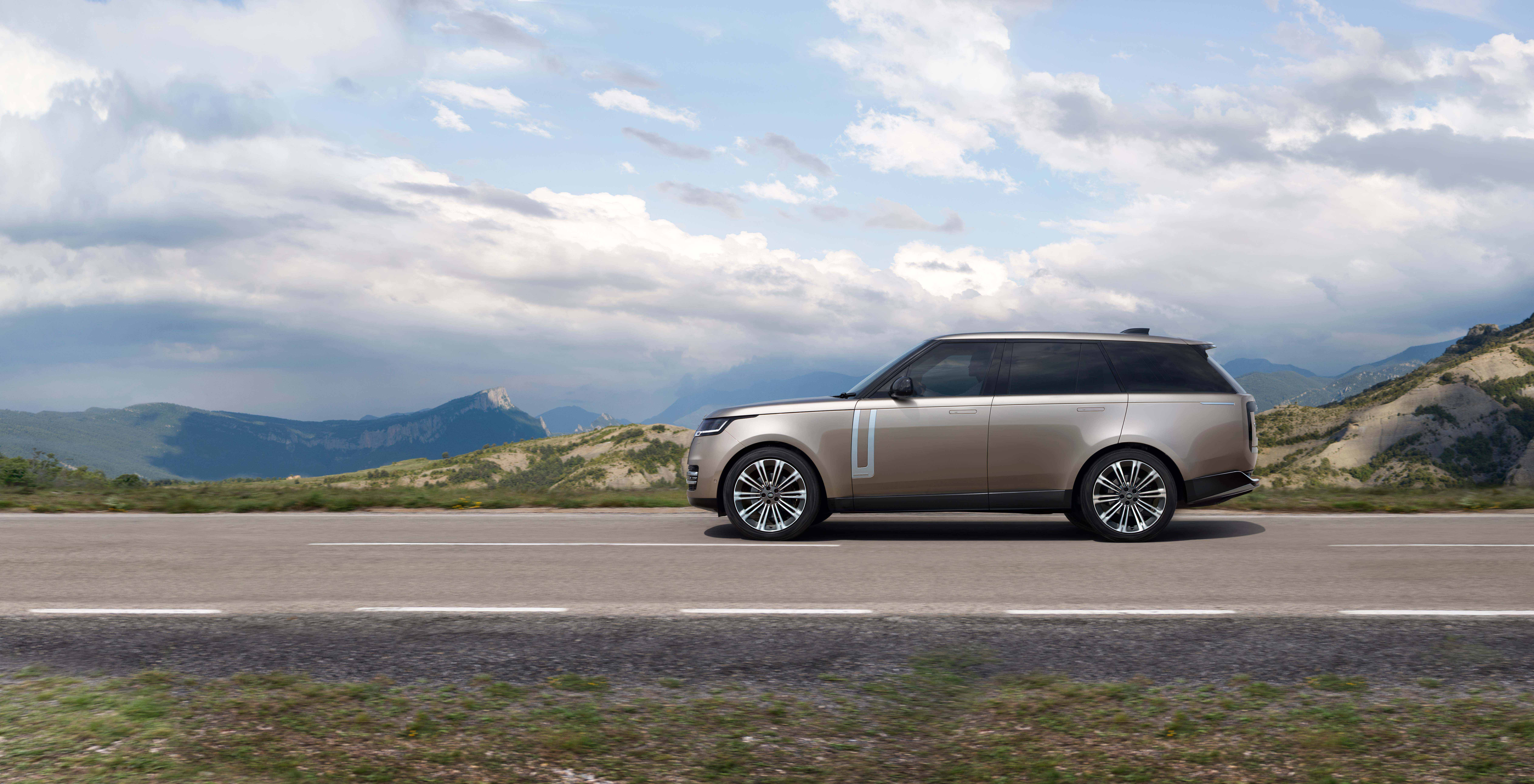 “The New Range Rover is a superb manifestation of our vision to create the world’s most desirable luxury vehicles, for the most discerning of customers,” said Thierry Bolloré, Chief Executive Officer, Jaguar Land Rover.

“It writes the next chapter in the unique story of pioneering innovation that has been a Range Rover hallmark for more than 50 years.”

While it looks outwardly similar to the existing Range Rover from some angles, the new version rolls on an all-new platform – Land Rover’s ‘MLA-Flex’ modular architecture – that is said to underpin everything, from the 4x4’s capability, to its “agile handling” and “peerless refinement”.

The new Range Rover, like the current version, will be offered in standard wheelbase and long wheelbase bodies (with up to seven-seat capacity), along with familiar model grades of SE, HSE and Autobiography.

From launch, there’ll also be a limited-run First Edition variant, which is based on the Autobiography grade and adds several unique features, including an exclusive Sunset Gold paint option.

Land Rover’s Special Vehicle Operations (SVO) have also got their hands on the new version and will offer the Range Rover SV. Available in SWB and LWB styles like the standard Range Rover, the SV also offers two distinct design themes – SV Serenity and SV intrepid.

Powertrain options on the new Range Rover remain mostly unchanged, with six- and eight-cylinder engine offerings under the Ingenium banner, supported by a 48V mild hybrid system (MHEV), but there is a new extended range plug-in hybrid with an electric motor and battery pack.

Engine options start with a pair of carryover six-cylinder diesel units, both of 3.0-litre capacity and paired with an MHEV. The D300 version produces 221kW and 650Nm, while the D350 delivers 258kW and 700Nm.

On the mild hybrids, integral ‘eHorizon’ navigation data allows for optimised energy use over the duration of a journey. While not particularly relevant for Australia, this technology has applications in designated low emission zones in major British and European cities. It also prioritises EV mode for the last 6km of pre-set journeys in urban areas.

The all-new engine option is the P510e, which pairs the P400 3.0-litre six-cylinder petrol engine with a 105kW electric motor and 38.2kWh battery for a combined 375kW and 700Nm. On electric power alone, range is 100km, with 0-100km/h acceleration of 5.6 seconds. The battery for the P510e is packaged so it doesn’t impact on the interior, so passenger space and luggage capacity are unaffected.

Common to all engine choices is an eight-speed automatic transmission, with high- and low-range, driving all four wheels through Land Rover’s intelligent All-Wheel Drive (iAWD) system. This is controlled by Land Rover’s Intelligent Driveline Dynamics (IDD) system, which monitors grip levels and driver inputs to predictively distribute torque between the front and rear axles, as well as across the rear axle, to optimise traction on and off-road.

According to Land Rover, the version of the MLA-Flex platform under the new Range Rover delivers even greater refinement and capability.

New to the Range Rover with this generation is the Dynamic Response Pro electronic roll control system that’s faster and more efficient than conventional hyrdraulic systems, while fully independent electronic air suspension - paired with adaptive dampers - is standard and is said to be more refined with this generation, controlled by the Adaptive Dynamics software.

An Active Locking rear diff is standard, as is Land Rover’s Terrain Response 2 system that offers six different driving modes to suit various surface conditions. This adjusts automatically to provide the perfect settings to suit the terrain, but can also be adjusted manually. There’s a configurable option, too, allowing the driver to select their preferred chassis set-up.

All standard wheelbase models offer 295m of ground clearance and 510mm of wheel articulation, while LWB bodies drop the former to 294mm. Wading depth is listed at an impressive 900mm, and when Wade Mode is selected on the Terrain Response 2, a wade sensing function allows the driver to see the depth of surrounding water on the centre touchscreen.

Approach/departure/breakover angles are 34.7 degrees, 29.0 degrees and 27.2 degrees respectively. The latter angle drops to 25.2 degrees on the LWB body.

Towing capacity is listed at 3,500kg (braked) and maximum roof load is 100kg. 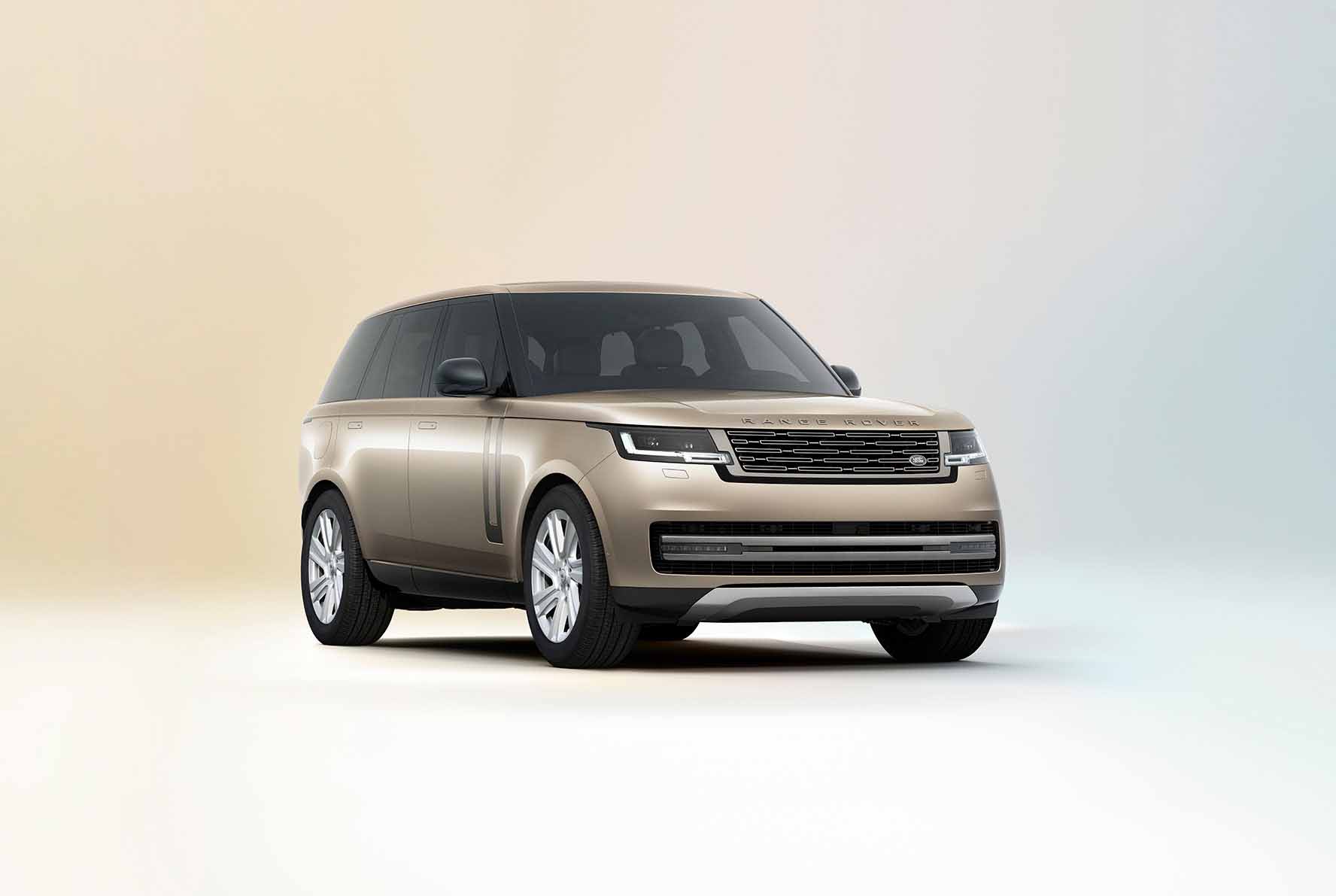 While still recognisably a Range Rover, especially when viewed from the front, the new version has been tweaked in several areas of its design, with an overall sleeker appearance that removes the bulk and bulges seen on some contemporary rivals.

Familiar styling touches include the falling roofline at the rear and waist-level character line that runs the length of the body. The front quarter ‘vents’ that were moved to the door and made bolder on the fourth-generation Land Rover have been simplified for the fifth-generation, while another notable element of the new Range Rover’s profile is the introduction of flush-mounted door handles.

A similar approach has been taken with the side glass and there’s no wrapround treatment of the tail lights. The result is a claimed drag co-efficient of 0.30, which is amazing for a vehicle of this size. Land Rover claim the new Range Rover is the most aerodynamically-efficient luxury SUV in the world.

At the front end, the distinctive Range Rover headlights remain, but they’ve been slimmed down and simplified, with a similar approach taken for the lower grille opening; now a single rectangle, with various configurations of horizontal bars (depending on model grade) that house the foglamps. This is part of a strong horizontal styling theme that extends to the grille pattern.

The grille now features a bolder U-shaped surround, but the prominent Range Rover badging on the bonnet’s leading edge is unchanged.

At the rear, the Range Rover badging also remains prominent, but there’s been significantly more change compared to the front end. The vertically stacked ‘cube’ tail lights have been replaced by a single vertical strip behind smoked lenses. These simplified tail lights are linked to a full-width horizontal bar to create the inverse of the grille’s U-shaped surround.

The kick-up of the Range Rover’s rear bumper remains, but it’s more subtle on the new version and appears not to project as far as the tailgate, but it does – just.

Inside, the design is technology-driven, with materials and innovations chosen to create what Land Rover call “a calm sanctuary for all occupants”.

The horizontal theme from the exterior dominates the front of the cabin, broken up by the floating central touchscreen, while the steering wheel features horizontal spokes.

Recognising the move away from leather for some customers, interior trim options include Kvadrat, a wool-blend fabric, and non-animal Ultrafabrics that are highly tactile.

Unsurprisingly, given its premium positioning, the new Range Rover is loaded with technologies to improve efficiency, convenience, refinement and safety.

Amazon Alexa voice control is introduced and works with existing Apple CarPlay and Android Auto compatibility (both wireless), while also able to communicate with other Alexa-enabled devices in the home.

The Pivi Pro infotainment system now features a larger 13.1-inch touchscreen with a smartphone-inspired interface and also introduces haptic feedback when the screen is touched.

Below this screen are traditional tactile switches for the climate controls, while a chunky shift lever for the transmission, engine stop/start button, driving mode selector and a wireless charge pad feature on the broad transmission tunnel.

For the driver, there’s a 13.7-inch digital display, which features new high-def graphics and is based around a three-panel layout. Multiple display options are available, including one mimicking a traditional analogue gauge layout.

The sound system is a 1600W Meridian Signature set-up, which includes speakers in the first- and second-row seat headrests that can also work with the Range Rover’s Gen3 Active Noise Cancellation system to create personal “quiet zones”.

A new Rear Seat Entertainment system has been introduced for second-row passengers that adds a pair of 11.4-inch HD touchscreens to the front seatbacks that support most devices and allow smart TV viewing using the vehicle’s built-in WiFi hotspot.

Cabin Air Purification Pro is standard, which reduces allergens and pathogens in the cabin and works with other technologies to enhance air quality.

LED lighting features all round, with high-def digital headlights, adaptive front lighting and technology that adjusts the light beam to illuminate upcoming corners and bends.

New manoeuvring lights provide a carpet of light around the Range Rover’s perimeter and work with the 3D Surround Camera system to illuminate the vehicle’s immediate surroundings in low-light conditions.

A final tech touch is Remote Park Assist, which allows the driver to manoeuvre the vehicle into and out of tight spaces via their smartphone without actually being inside. 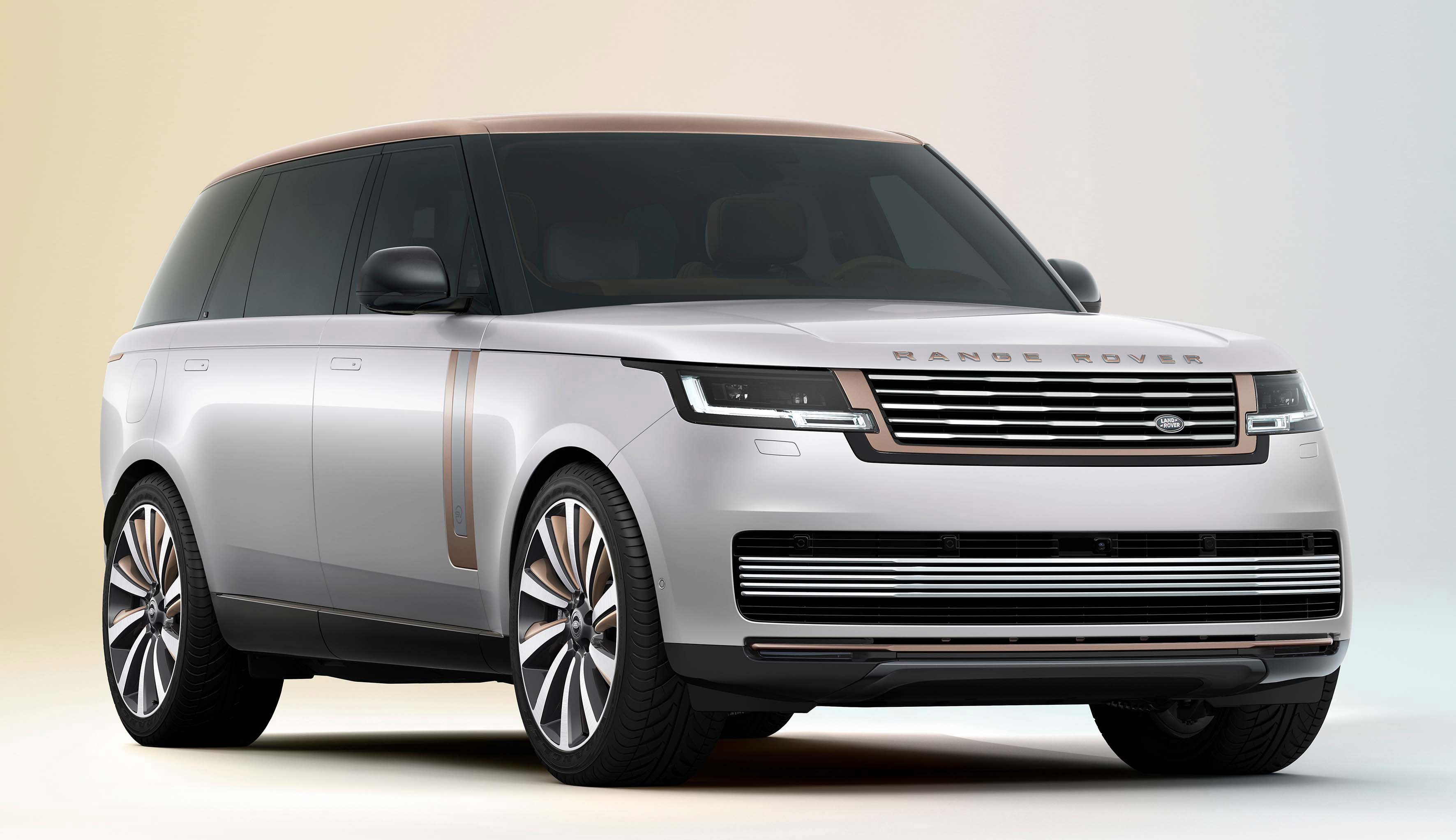