Mitsubishi has unveiled their all-new, fourth-generation Outlander SUV, using a global launch this past February on Amazon Live – the first automobile to be launched on the platform.

As well as a new look, similar to some of Mitsubishi’s other current SUVs and the Triton ute, the new Outlander rolls on a newly developed platform that’s shared with the latest Nissan X-Trail.

A 2.5-litre four-cylinder petrol is also new (and also shared with the X-Trail), with the Super-All Wheel Control (S-AWC) all-wheel drive system updated and a new drive mode selector fitted.

While the current Outlander offers a choice of five- or seven-seat capacity, early information released by Mitsubishi suggests the next-generation will only be a seven-seater. Regardless, cabin space and comfort is said to be improved, along with the tech and safety features. 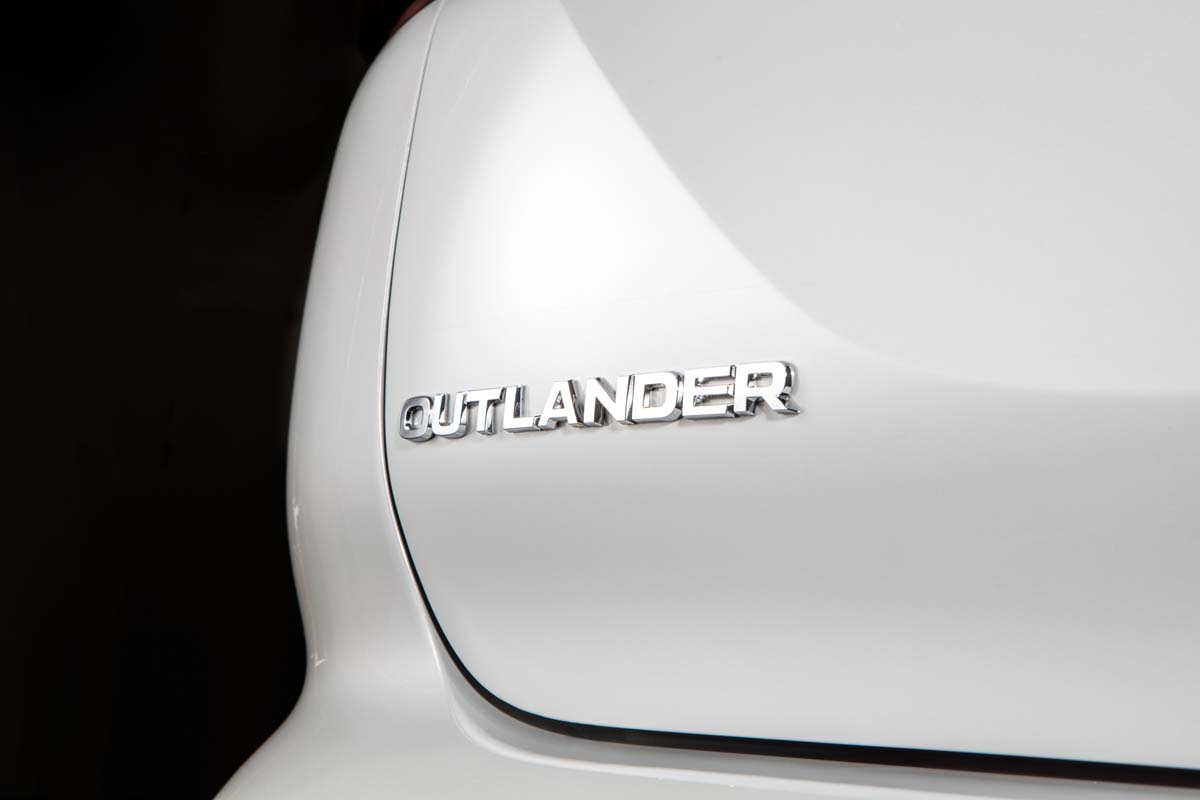 “Based on the product concept ’I-Fu-Do-Do,’ which means authentic and majestic in Japanese, the all-new Outlander has been crafted into a reliable SUV with significantly upgraded styling, road performance, and a high-quality feel to satisfy the needs of customers who want to expand their horizons and take on challenges of every kind,” said Takao Kato, chief executive officer of Mitsubishi Motors Corporation.

Since its Australian launch in 2003, Mitsubishi have sold 167,575 Outlanders locally, accounting for a claimed 7.8 per cent share of our Medium SUV market.

It wasn’t apparent at the time, but Mitsubishi presented a very close representation of the upcoming Outlander with their ‘Engelberg Tourer’ concept from 2019.

The oversized, low-mount headlight treatment and many other elements from that concept have been carried over mostly unchanged to what will be the 2022 Outlander.

Mitsubishi call the new Outlander’s horizontally-themed makeover ‘Bold Stride,’ with General Manager of Design, Seiji Watanabe, adding that the strong horizontal elements express a more solid stance, while retaining a sense of sleekness to capture the “power and graced of the Outlander’s dynamic SUV handling and performance”.

It’s certainly a change from the current, third-generation Outlander, with a boxier look overall and the ultra-slim treatment for the DRLs repeated in the tail light design. Two distinctive creases in the flanks carry over from the Engelberg Tourer, as does the floating D-pillar styling that removes visual weight to make the rear look sleeker. 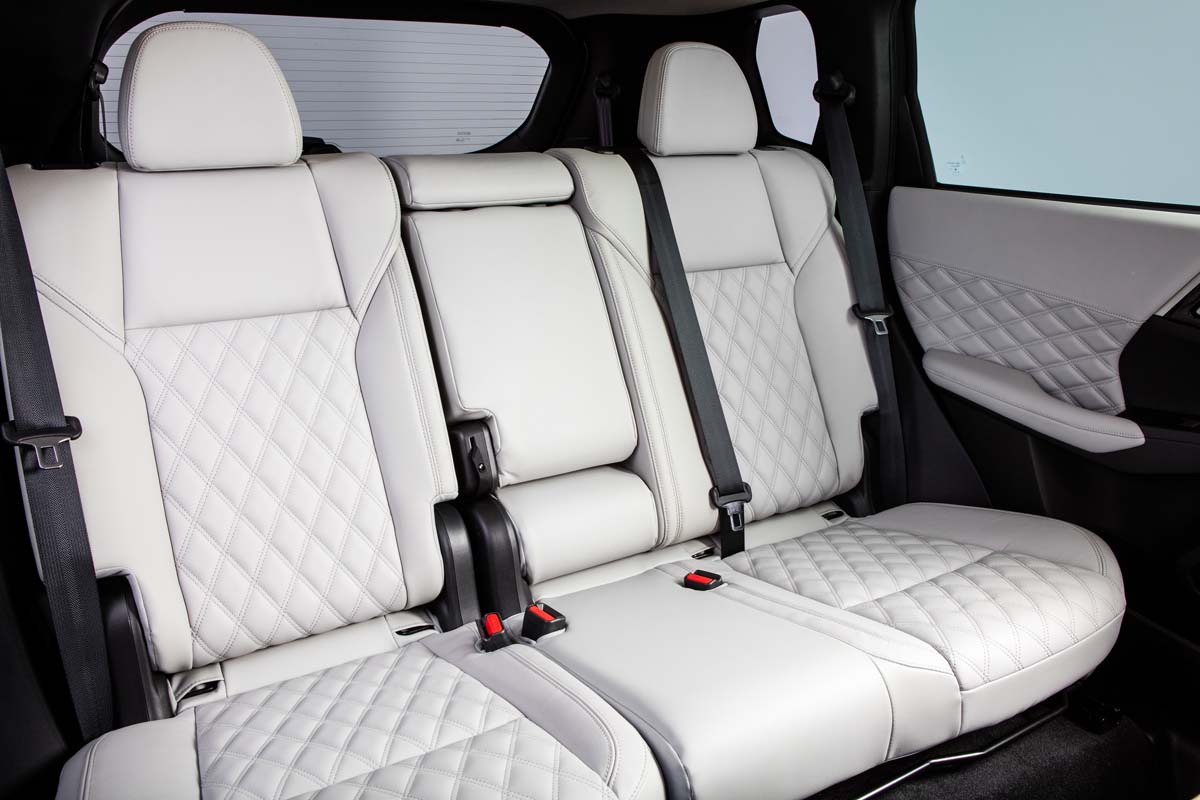 Of note at the rear is a hexagonal styling motif in the sculpting of the tailgate that, while barely visible, is said to have been inspired by the spare wheel carrier from the current Pajero.

A premium look to the exterior is said to be accented by a new ‘Black Diamond’ option in the high-brightness Diamond Series paint palette, joining the existing Red Diamond and White Diamond colours for nine choices in total. 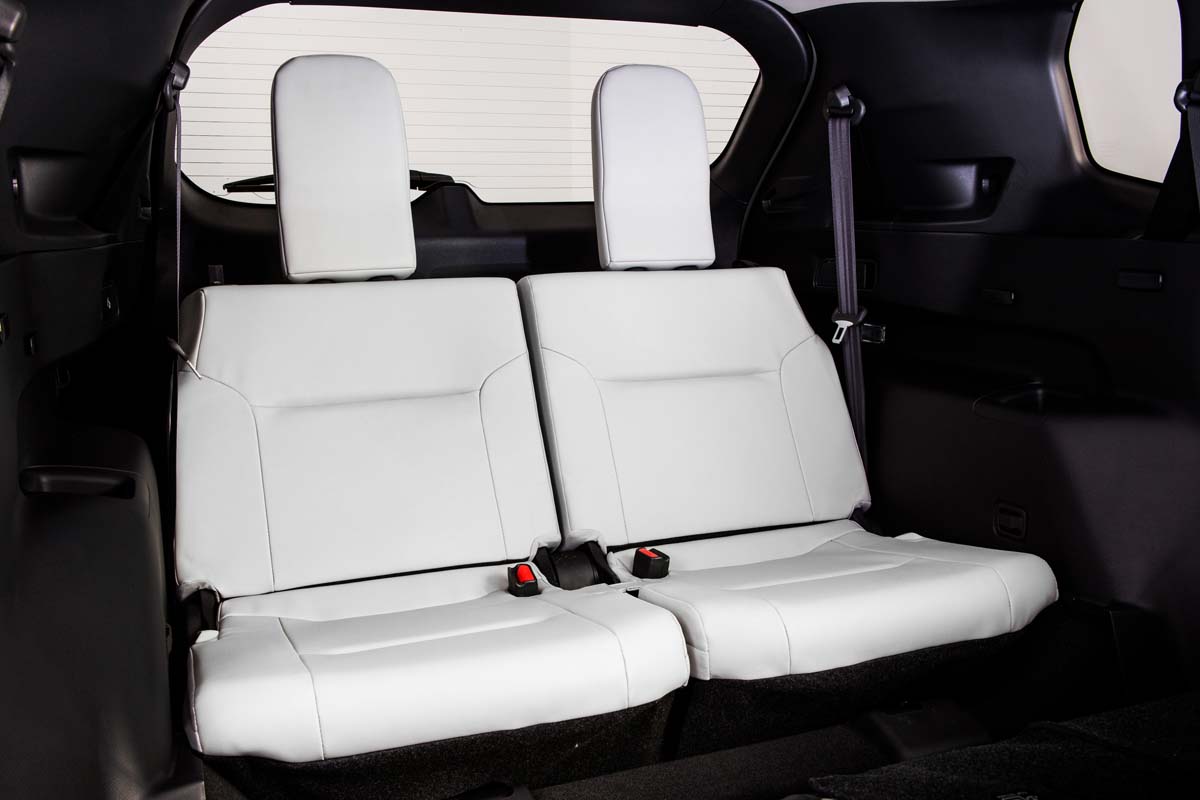 Inside, the horizontal theme continues and is seen most obviously on the dash treatment. Moving the centre console infotainment screen up and the air con controls down allows a broad horizontal line to run virtually uninterrupted across the width of the dash. Colour treatments separating the lower centre console from the dash enhance this effect.

The other notable change inside is the adoption of a more compact gear shifter for the CVT transmission and the adoption of a large, tactile, rotary-style drive mode selector. The steering wheel has had a makeover, too, now in a four-spoke design that slims down the layout of the various on-wheel functions to continue the horizontal theme. 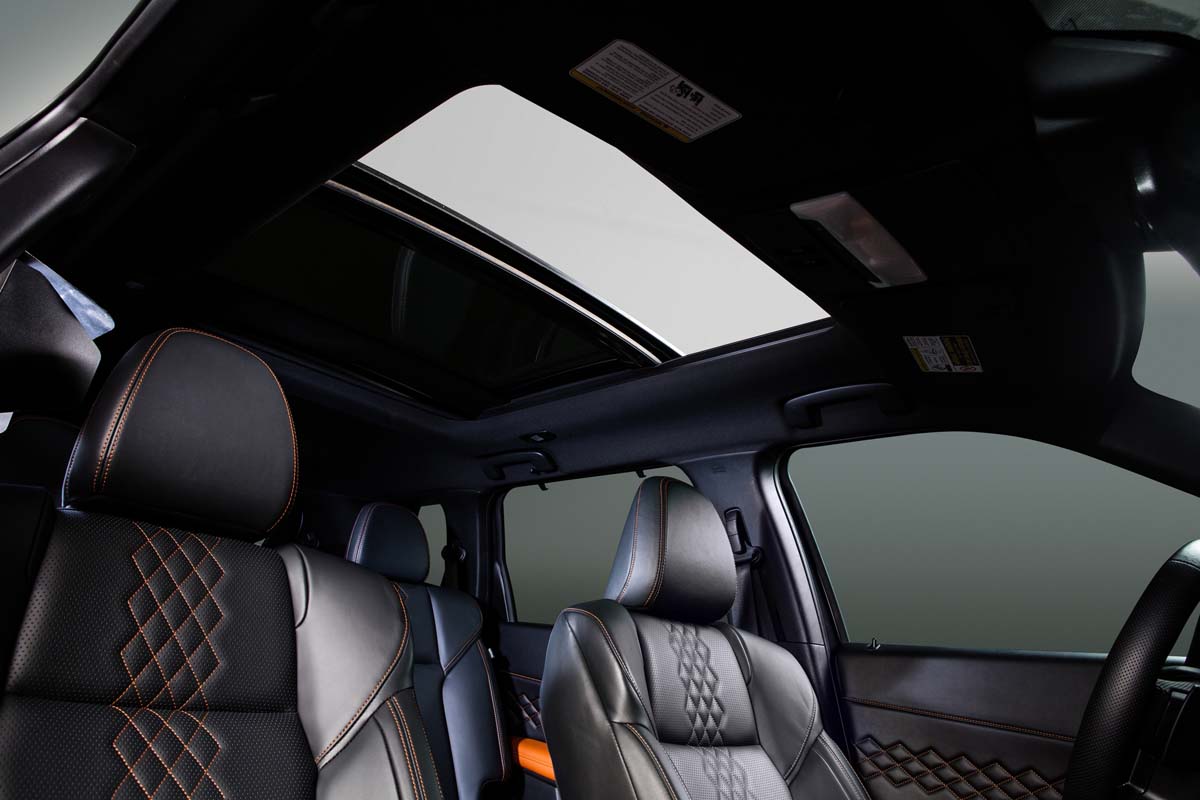 Overall, there’s a definite look of quality to the new Outlander’s interior, with diamond quilting on the seats and doorcards, real aluminium trim on selected model grades and a choice of leather and semi-aniline leather seats, echoing what’s seen on premium SUVs.

More practically, there’s improved elbow and knee room, thanks to a 51mm increase in body width and 36mm longer wheelbase. 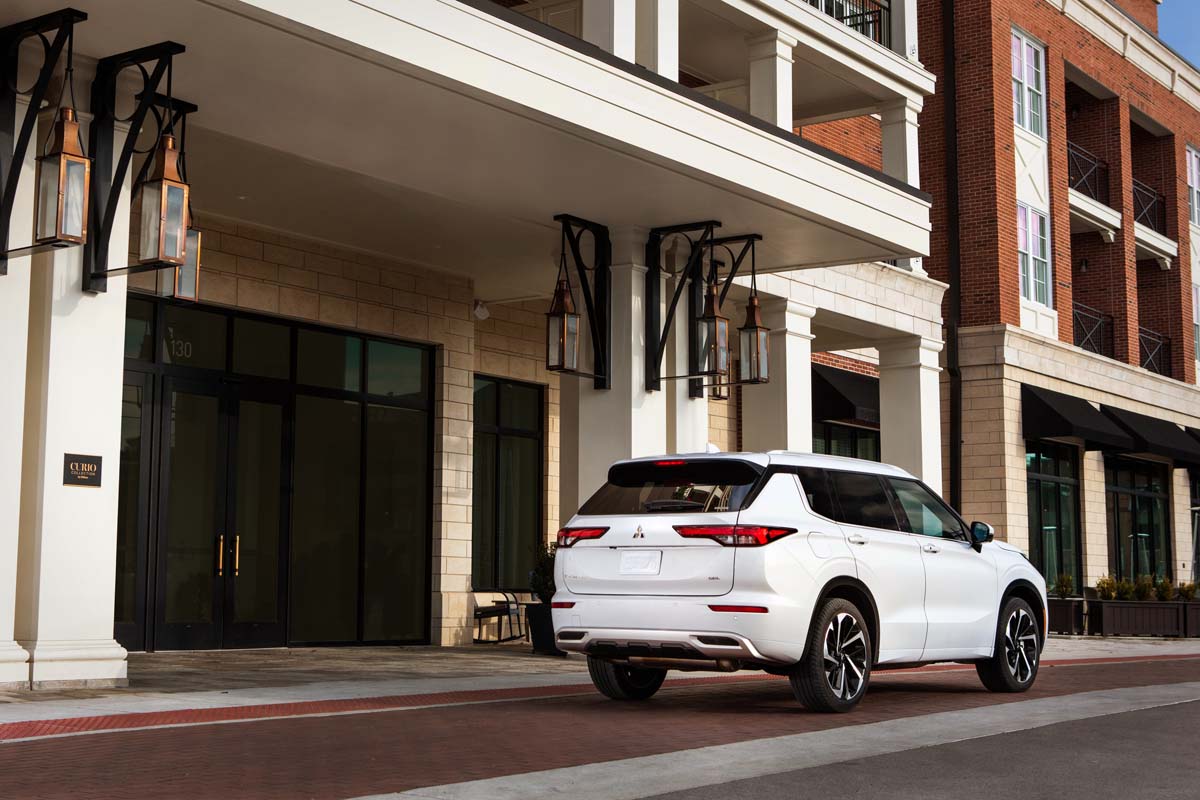 The chassis’ ultra-high tensile sheet steel construction is a Mitsubishi first, offering increased rigidity without adding weight. Suspension and steering have been retuned to suit the stiffer platform.

As well as a new chassis, there’s also a new approach to powertrains. The 2.2-litre diesel and both the 2.0-litre and 2.4-litre MIVEC petrol four-cylinder units are gone (for now), replaced with a 2.5-litre petrol engine. Producing 135kW at 6000rpm and 245Nm at 3600rpm, the engine offers 8.9 per cent more power. Fuel economy figures have not been released, but Mitsubishi are claiming a 2.6 per cent reduction in fuel consumption, despite the larger capacity. 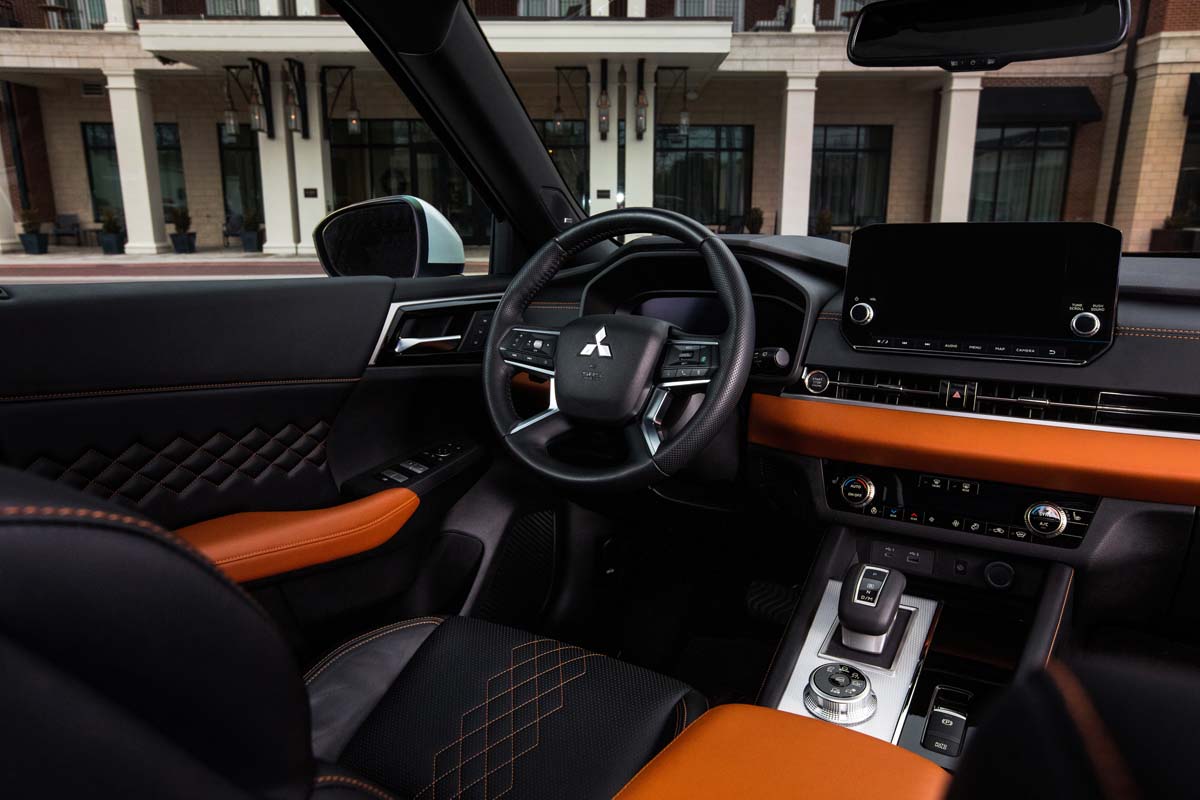 Along with the old engines, it seems like the manual and conventional automatic transmissions have been binned, too, as a CVT is the only transmission mentioned in the Outlander’s pre-release material. This will have two more ratios than the old version – up from six to eight – and is described by Mitsubishi as a ‘sport mode’ CVT. The CVT debuts another Mitsubishi first in the form of shift-by-wire electric shifting, rather than conventional hydraulic operation.

The upcoming Outlander’s all-wheel drive system will feature an electronically-controlled set-up, using an hydraulic clutch driven by an electric motor to distribute front and rear torque.

Mitsubishi’s S-AWC dynamic control technology is improved for the upcoming Outlander, now offering ’Brake AYC’ active yaw control on the rear wheels, which allows drive and braking force across front and rear axles and left and right wheels to be optimised. The 2WD versions of the Outlander will also feature Brake AYC front and rear, enhancing the ABS and Active Stability Control systems. 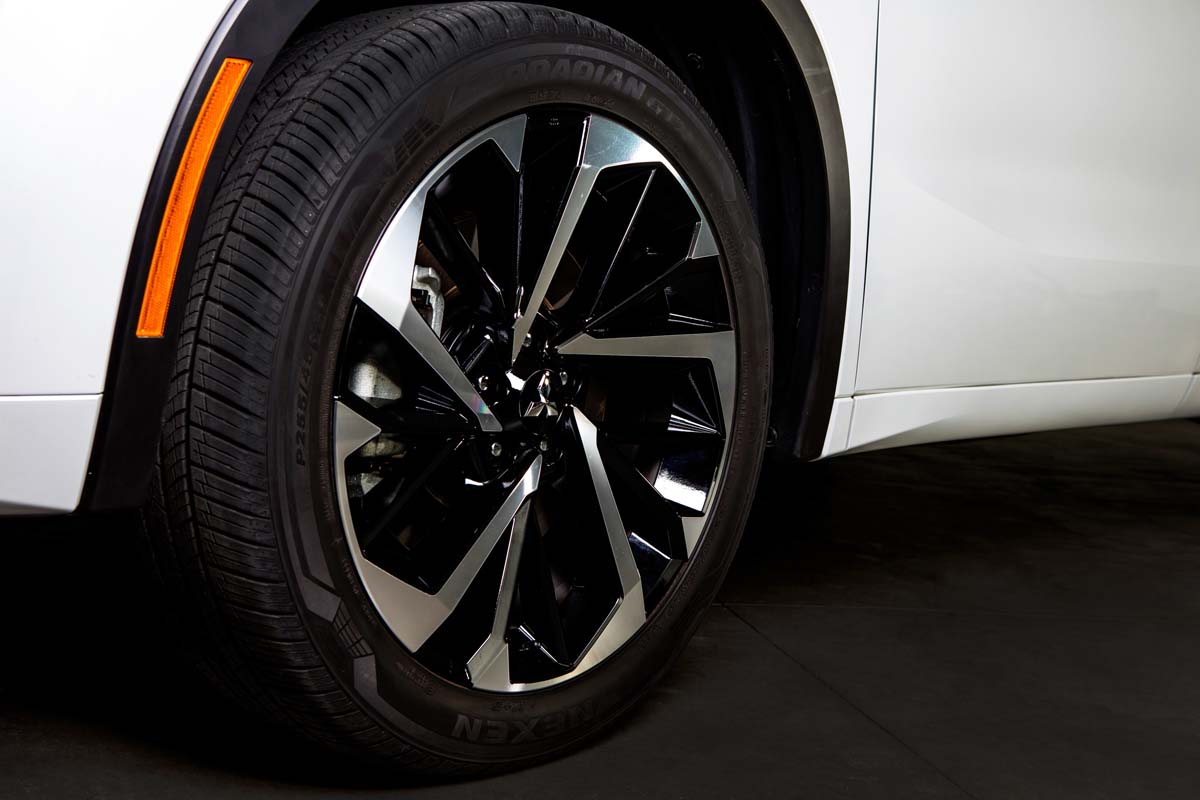 To suit the introduction of larger wheels and wider tyres, the new Outlander features larger brake discs, too, up from 297mm to 350mm on the front and 302mm to 330mm at the rear.

Driving modes – via the all-new selector - offer five options in the 2WD Outlander and six in the AWD version. Normal, Tarmac, Eco, Gravel and Snow are common to both, with Mud exclusive to the AWD Outlander.

In moving the Outlander upmarket (the “majestic” part of the ’I-Fu-Do-Do’ philosophy), Mitsubishi have added more premium interior features.

While three specific trim levels are offered (presumably continuing the current ES, LS and Exceed options), all feature a high standard of fit and finish. The base seat and door trim is in fabric, the mid-level in suede, and the premium level in leather. The lower two levels feature piano black detailing, with knurled aluminium added on the premium level.

It’s a similar story with the centre console display – 9.0 inches for the upper trims, 8.0 inches for the lower. Both screens come with a Smartphone-link Display Audio navigation system that provides “highly accurate route information”. Android Auto and Apple CarPlay connectivity is standard.

Another Mitsubishi first on the new Outlander is a 10.8-inch head-up display that’s customisable, allowing navigation and audio information to be displayed, as well as driving data.

Continuing the premium theme, a 10-speaker BOSE premium sound system is offered, but whether this is standard range-wide is unclear. 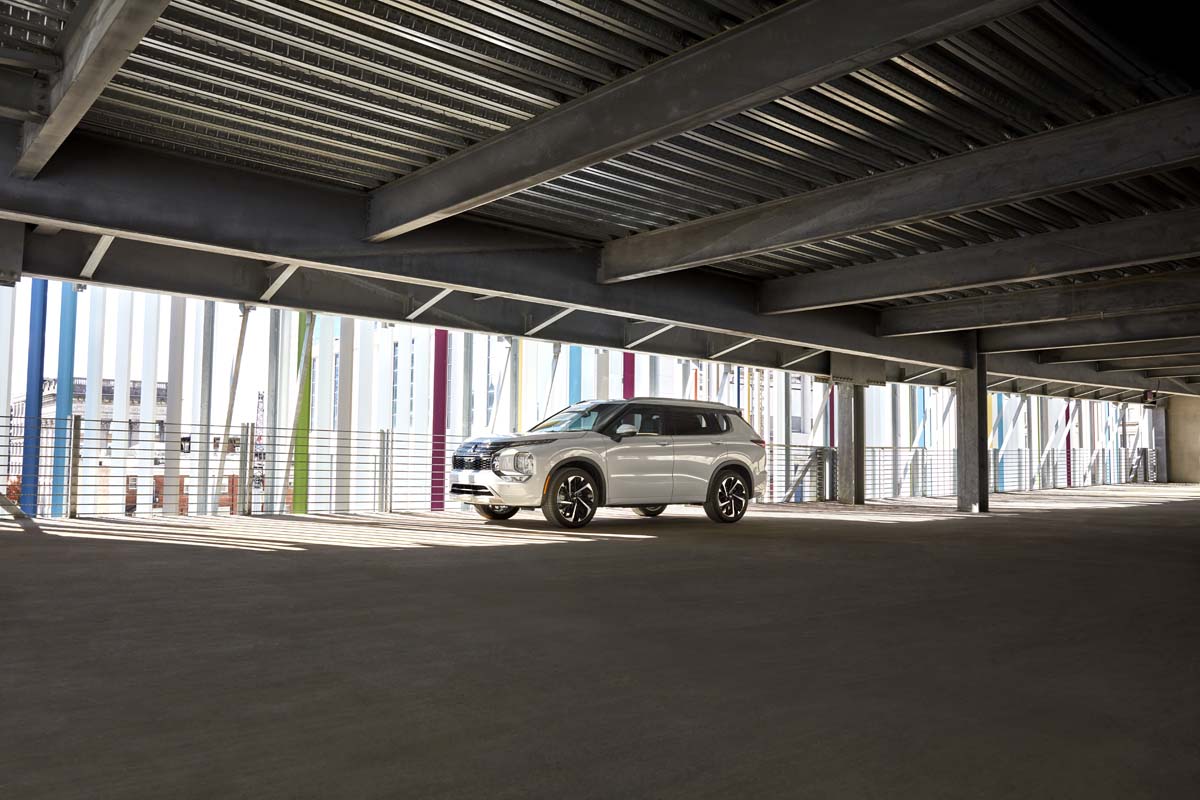 USB charge ports (Type C and A) and a wireless smartphone charge tray are on the centre console, with smartphone-specific storage options throughout the cabin.

There’s a suite of eleven airbags, too, while Outlanders with the navigation link offer speed sign recognition with automatic speed adjustment.

Distribution of safety features across the upcoming Outlander range – what grades get what tech - is yet to be confirmed, but expect the bulk of features to be available range-wide.

Full specifications, model range and pricing for the new Outlander will be announced prior to its local release later this year.