Jeep have released an updated version of their Compass, which arrives with a range of improvements and new features, including enhanced safety technology, an upgraded interior and more convenience features.

While exterior changes for the compact SUV are limited to the front-end styling and new-look wheels, there are significant changes inside, with what Jeep are calling an all-new interior that includes larger screens for the instrument and centre console.

Safety and convenience upgrades enhance the Compass’s on-road abilities, with this focus reinforced further on a Compass Launch Edition that, like the Compass Night Eagle it’s replacing, is only available in two-wheel drive. 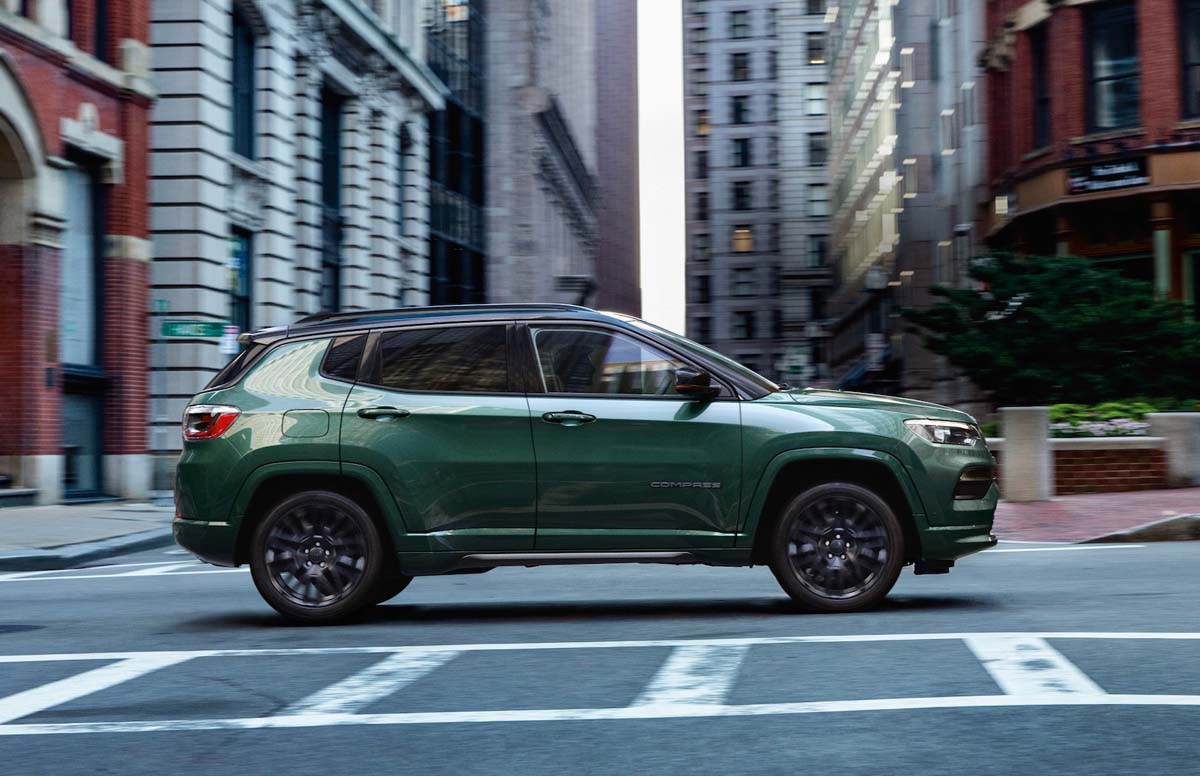 While a launch edition is usually high-priced and lavishly equipped, the 2021 Compass Launch Edition is the entry-level model in the updated range. Above this sit familiar Limited, S-Limited and Trailhawk grades, but a special limited-edition Compass 80th Anniversary edition has been added, too.

“Since its launch in 2017, the Jeep Compass has been renowned as the category leader when it comes to off-road capability in the compact SUV segment, and now we’re pairing that capability with advanced technology and a premium interior styling. The comfort you want for your daily commute and the capability to tackle your weekend adventures have found harmony in the new Jeep Compass,” said Tom Noble, Marketing and Communications Director, Jeep Australia.

Most of the upgrades on the 2021 Compass are inside the cabin. Jeep are calling it all-new, with a “more modern, sophisticated style”.

The dash, central tunnel and doors have been redesigned, with the mix of surfaces, materials and fabrics leading to what’s described as a three-dimensional look.

Continuing the horizontal them of the front end, a similar approach has been taken with the dash, which features slim air vents and a new 10.1-inch Ultra HD touchscreen for Jeep’s Uconnect infotainment system. Larger than the 8.4-inch screen currently offered with the Compass, and projecting up from the dash, rather than being embedded in it, the screen sits higher and in a more ergonomic position.

The instrument display has been upsized, too, from 7.0 inches to 10.25 inches, but is available only on the Limited, S-Limited and Trailhawk grades.

The central transmission tunnel is higher, too, meaning there’s now almost 5 litres of space under the centre armrest, while the storage section ahead of the gear lever is 2.4 litres and large enough to hold a mini tablet. In total, console storage has increased three-fold to 4.4 litres.

Cargo space hasn’t changed, at 438 litres, but accessing that space is easier with the addition of a new tailgate that can be opened via a sensor under the rear bumper. 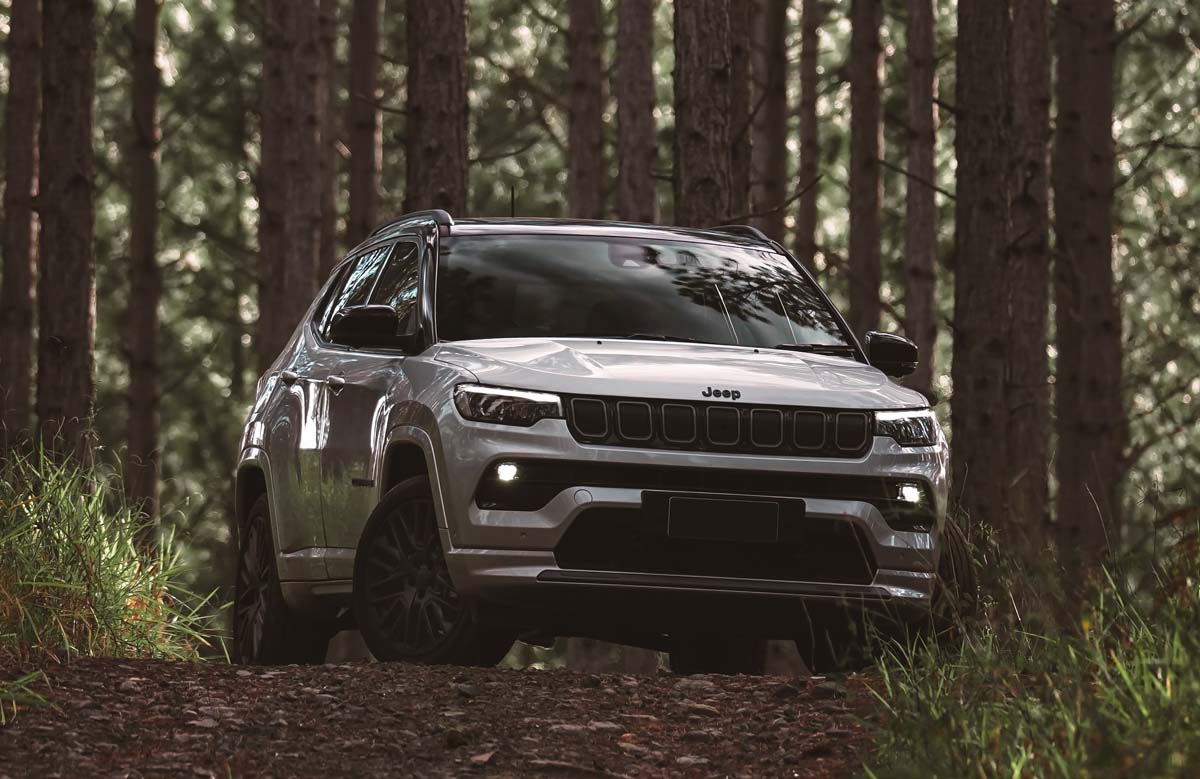 While still recognisably Jeep and recognisably Compass, the exterior on the 2021 Compass update is different from the version it replaces – at least at the front end.

The face of the Compass is now closer to the larger Cherokee and Grand Cherokee in appearance, with boxier and narrower headlights that feature DRLs repositioned to the upper edge. Reshaping the headlights has resulted in some changes to the bonnet, too.

The central grille opening is now full-width, connecting the foglamp openings.  The lower grille is mostly unchanged, but trim has been modified, while the traditional Jeep seven-slot upper grille is decorative, with no actual openings for airflow.

Jeep call this new horizontally-themed treatment of the front end ‘layered’ and it certainly breaks up the visual depth of the vehicle.

There are no changes to the profile, nor at the rear, bar what appears to be some minor lower bumper changes.

There are two new colour options, Hunter Green and Galaxy Blue, for a total of seven on the Compass palette. 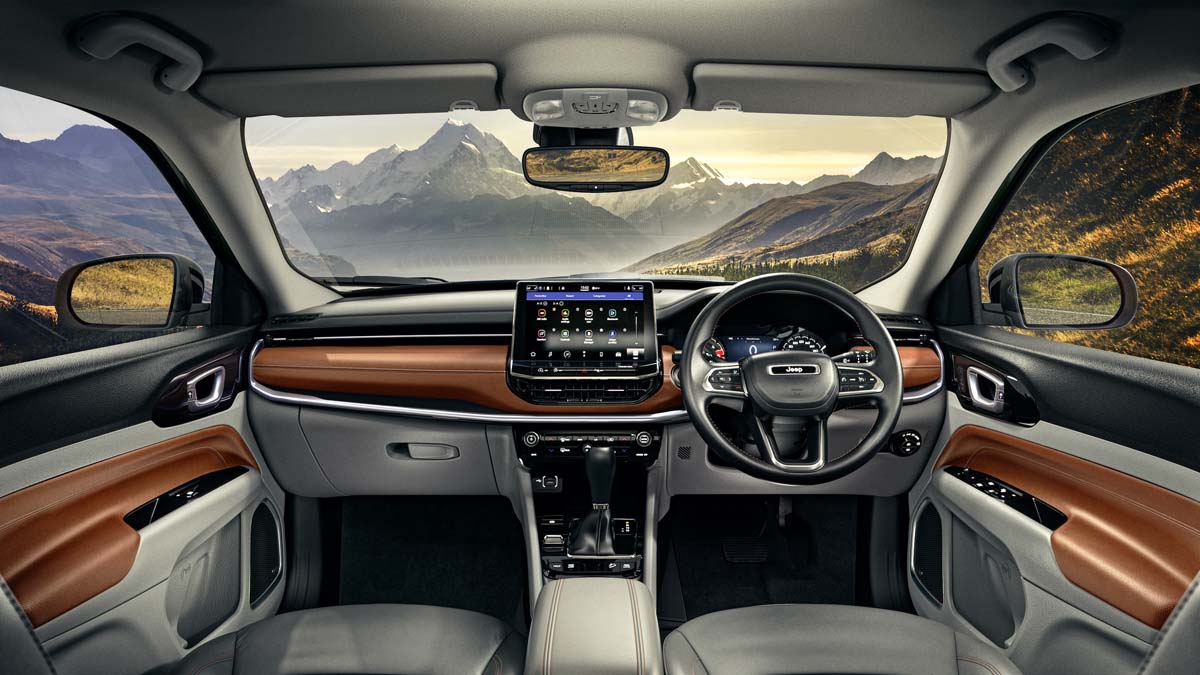 Described as the most advanced infotainment system in Jeep history, Uconnect 5 features a more powerful processor and an interface that’s easier to use, with the ability to personalise the display to show favourite and frequently used features.

Voice control of the navigation, air con and radio settings is now standard, as is a wireless charging pad and wireless Apple CarPlay and Android Auto connectivity.

A new 360-degree surround-view camera system is optional for the S-Limited and standard on the Trailhawk, where it’ll come into its own negotiating rough and tight off-road trails. 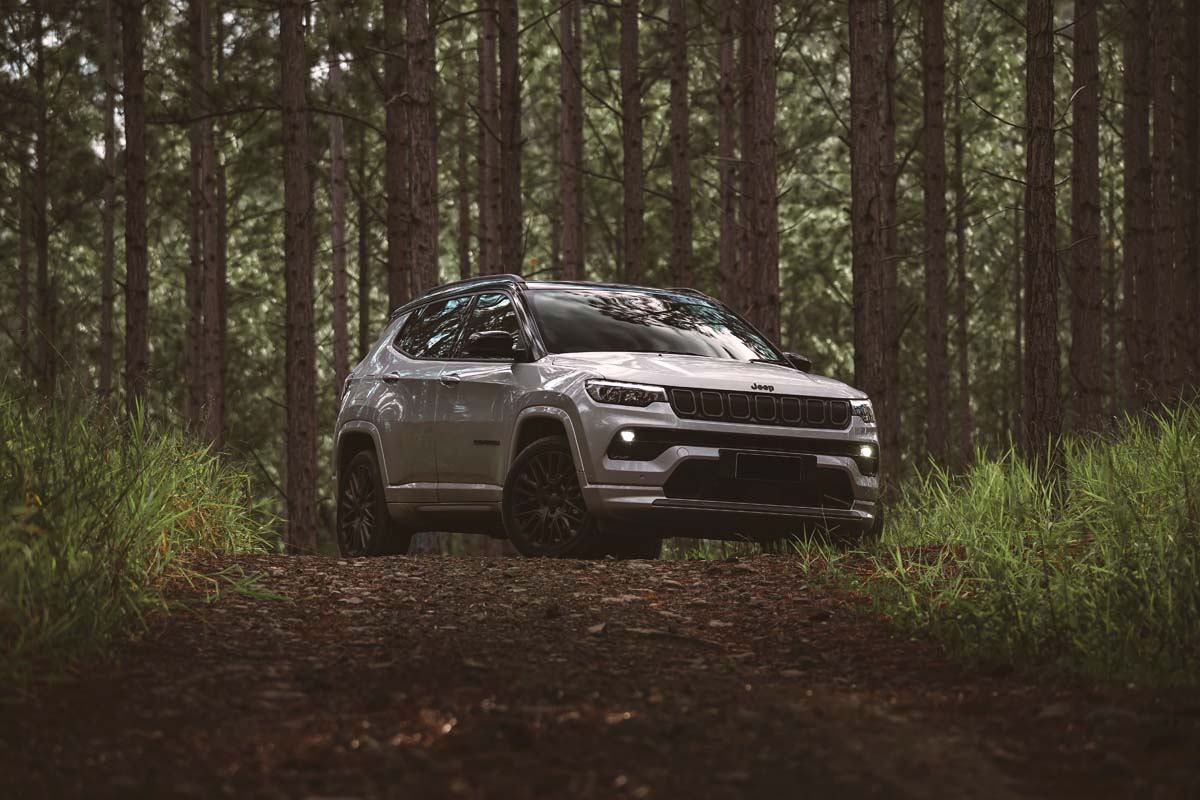 Replacing the Compass Night Eagle and identified by its black roof and ‘Launch Edition’ badging, the new entry-level Compass Launch Edition is powered by the 2.4-litre ‘Tigershark’ four-cylinder petrol engine, producing 129kW/229Nm and matched to a six-speed automatic transmission. This grade’s low price of $37,950 (+ ORCs) is explained by the fact it’s only available with front-wheel drive. To get the Active Drive part-time AWD system and Selec-Terrain traction management system, you need to step up to – and shell out an additional $6,000 for – the Compass Limited.

While it’s powered by the same 2.4 petrol engine as the Launch Edition, the Limited upgrades the transmission to a nine-speed auto and features Active Drive and Selec-Terrain as standard.

As well as all the Launch Edition tech and convenience upgrades, the Limited adds parking assistance and the hands-free ‘Open ‘n’ Go’ tailgate, while the headlights are upgraded to new bi-function LED projector units.

Sitting above the Limited, the Compass S-Limited is primarily a style upgrade, running the same drivetrain and part-time 4x4 system, but adding body-coloured exterior cladding and 19-inch alloys, both of which are new for this grade. Carryover exterior features include a black roof, Neutral Grey exterior accents and badging, a Granite Crystal grille, accent colour roof rails and grey window surrounds.

The S-Limited’s premium over the Limited is explained by the addition of a 9-speaker Alpine premium sound system and interior touches that include a black headliner and contrast stitching on the standard leather seats. Optional on this grade is a Premium Package that adds a panoramic sunroof, heated/ventilated front seats, a heated steering wheel and surround-view camera.

The Trailhawk remains the premium Compass grade, the only one that’s Trail Rated and the only one with a diesel engine. This 2.0-litre ‘MultiJet’ four-cylinder unit now features AdBlue to meet Euro 6D emissions levels, but this doesn’t impact outputs, so the 125kW/350Nm maximums are unchanged.

Adding Rock Mode to the Selec-Terrain system and featuring off-road suspension tuning with a raised ride height, the Trailhawk is also the only new Compass grade offering a full-sized spare wheel as standard, along with front and rear tow hooks, 17-inch wheels and underbody protection.

Braked towing capacity for the Limited and S-Limited is 1,000kg, increasing to 1,500kg on the Trailhawak, but Jeep says that towing is “not recommended” for the FWD Launch Edition.

Listed economy from the petrol-engined Compass grades varies from 7.9lt/100km for the Launch Edition to 9.7lt/100km for the other grades. The Trailhawk’s economy figures are yet to be released, but the current model offers 5.7lt/100km on the combined cycle, so the new version should be similar, if not the same.

Now and in the Future

Both the Launch Edition and S-Limited Compass grades are available now, with the Limited and Trailhawk set to reach our shores before the end of 2021.

All new Compass models will be covered by the Jeep Wave Commitment that includes a 5-year warranty, capped price servicing and lifetime roadside assistance.

While some of the 2021 Jeep Compass range is available now, a special 80th Anniversary edition will join the grades due for local release later this year.

Powered by the Limited’s 2.4 petrol engine, matched to a nine-speed auto and Active Drive AWD with Selec-Terrain, the 80th Anniversary is priced from $47,941 (+ ORCs).