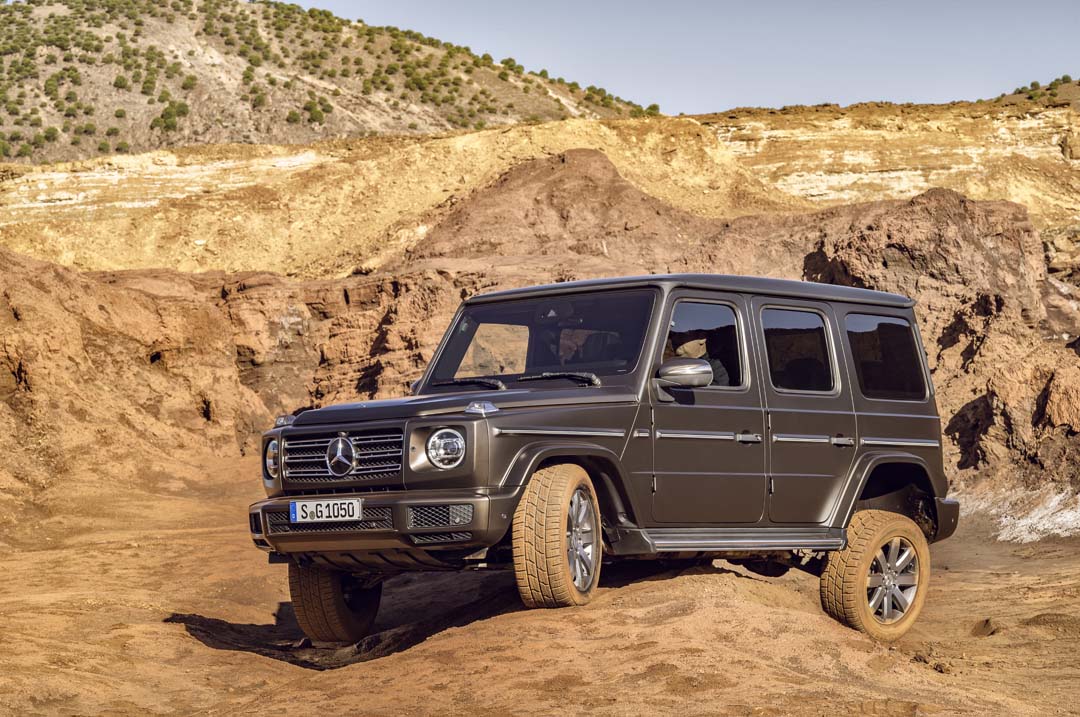 Mercedes-Benz chose January’s North American International Auto Show in Detroit to unveil their new G-Class, the first truly new version of the brand’s signature off-roader since its debut in 1979.

With increased luxury and technology features, the new G-Class is clearly a more refined and upmarket machine than its predecessor and taps into the exclusiveness of short-run models like last year’s G 650 Landaulet.

But Mercedes says the new version still has what it takes to tackle extreme off-road terrain, thanks to a tough body-on-frame design that’s lighter and more rigid than the previous model, plus other improvements.

“Enhancing an icon such as the G‑Class in technological terms was both a challenge and an opportunity at the same time. Each part and every bolt came under close scrutiny,” said Dr Gunnar Güthenke, Head of the Off-Road Product Group at Mercedes-Benz. 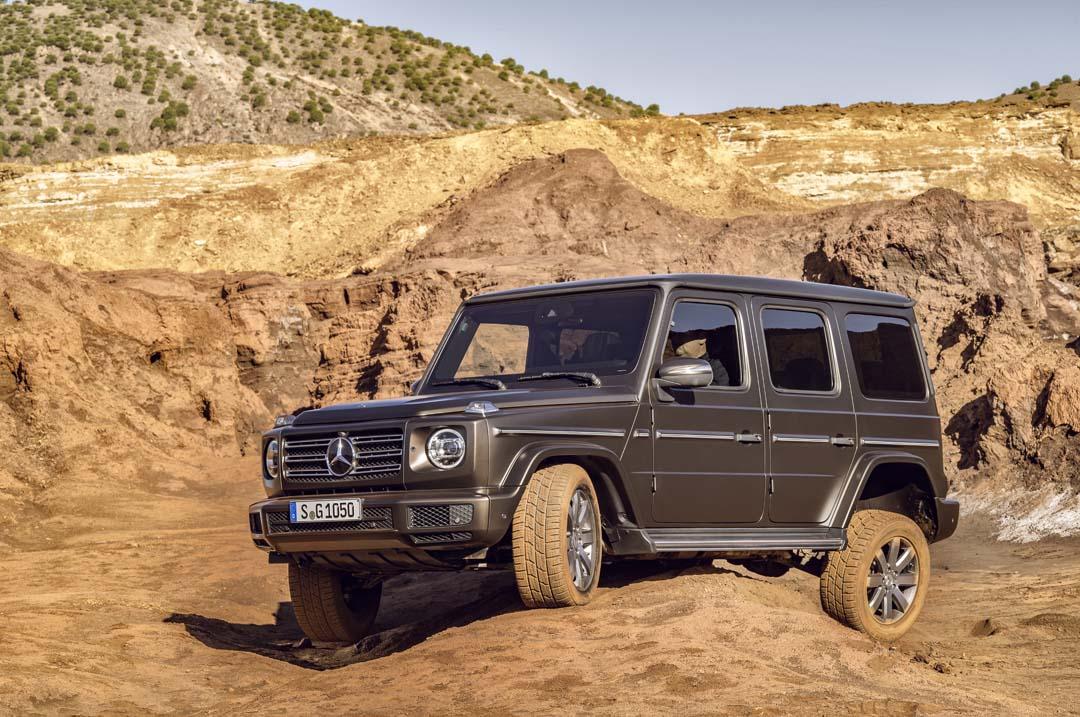 Externally, the new G-Class doesn’t look that far removed from its predecessor, but is longer by 53mm and wider by 121mm. Mercedes calls the new, but familiar design “more taut”, with the wheelarch flares, rear-mounted spare wheel and bumpers better integrated into the overall bodyshape, while reduced panel gaps are part of the model’s move to be closer to Mercedes passenger cars in terms of a “luxury” look and finish.

The gulf between the old and new G-Class is wider inside, with an all-new instrument panel, a more modern look to the interior and increased use of hand-finishing and high-quality materials.

Optional features include dual 12.3-inch digital displays (one for the instrumentation and the other for infotainment functions) and a separate control panel for the driving assistance systems.

For all its modernisation, some signature ‘G’ features remain, like the passenger grab rail and chrome-trimmed switches for the four-wheel drive’s diff locks. 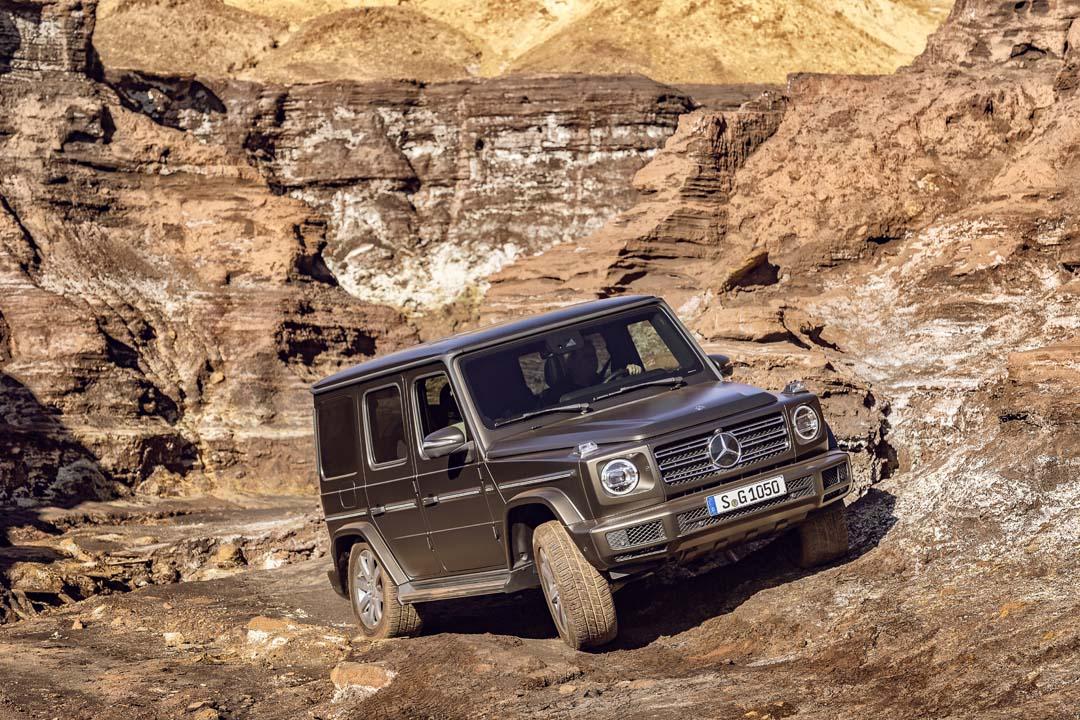 Holding on to Power

The signature V8 powerplant for the G-Class remains, with the latest 4.0-litre twin turbo petrol engine, in the G 500 model, producing a claimed 310kW, with 610Nm available between 2000 and 4750rpm.

Listed economy in G 500 application is 11.1lt/100km, which is an improvement on the current version.

Matched to this is a new 9G-TRONIC nine-speed automatic transmission that’s been specifically developed for the new G-Class. There’s a wide ratio spread to suit road use, but shift times are said to be quicker.

Other powertrain combinations are expected to be offered, including a turbodiesel, but details hadn’t been released at press time. 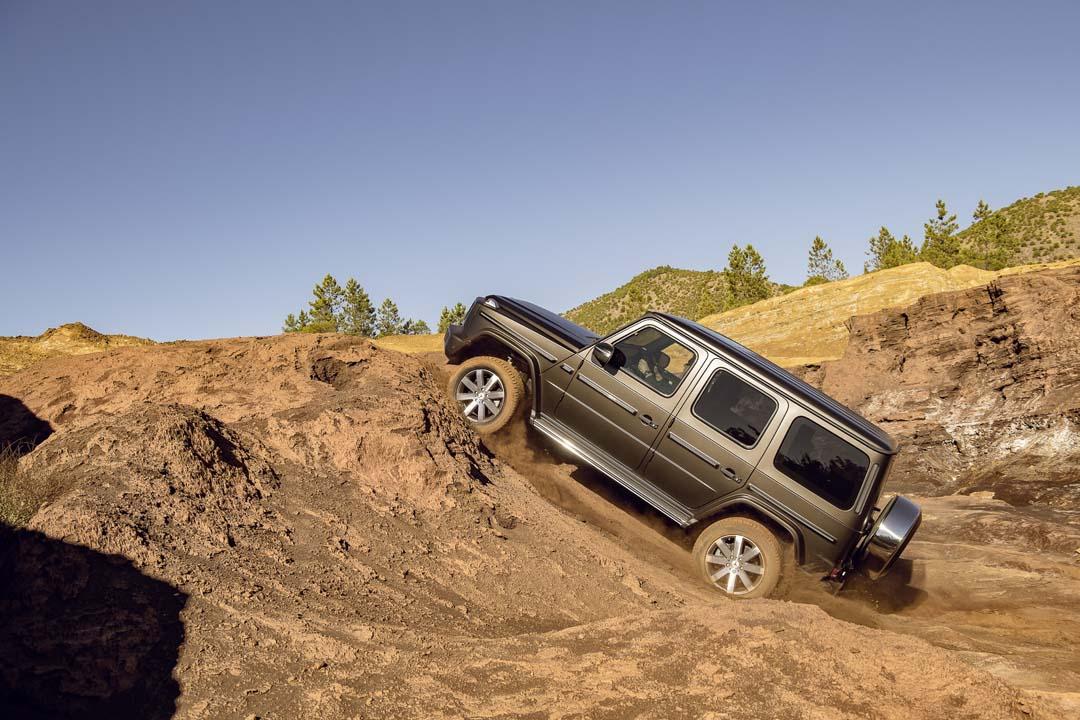 All seats feature heating, there’s memory function on the driver’s seat and rear seats are 60/40 split. Optional seating packages add multi-contour seats with massage and climate control functions, as well as front seats with air chambers that adjust their inflation to suit the driving dynamics, thus providing better support, regardless of the terrain or driving style.

NVH levels are said to be improved, too, thanks to radical changes to the G-Class chassis and materials. 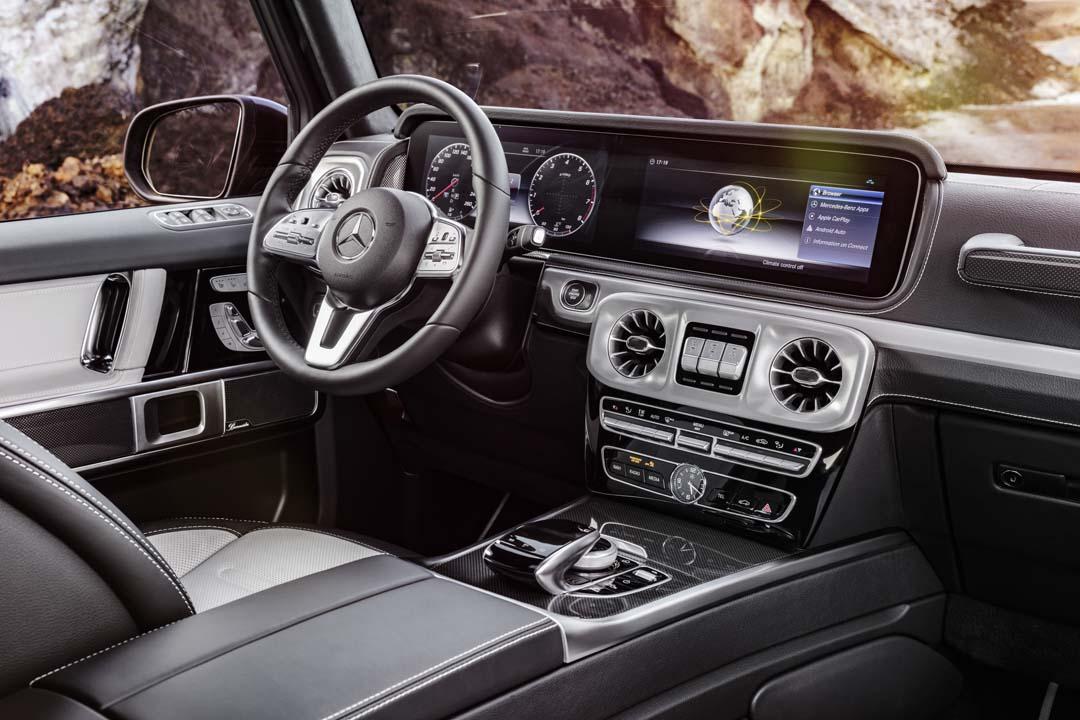 Improved On and Off-Road

Compared to the outgoing model, the new G-Class is lighter by 170kg, achieved through varying steel grades through the chassis and body structure, as well as aluminium for the bonnet, front guards and doors. Despite the reduced weight, Mercedes says torsional rigidity has improved by 55 per cent.

Mercedes says changes to the suspension on the new G-Class have made it an even better machine off-road, with on-road handling improved, too.

The new suspension has input from AMG and consists of an independent double wishbone front end and trailing arms on the live axle rear that is said to improve handling both on smooth surfaces and away from them. Optional to this is an Adaptive Damping System.

Both axles are raised to 241mm (+6mm) to improve ground clearance, while the front axle and strut tower brace are said to result in off-road performance that surpasses the previous generation G-Class.

Mercedes says 100 per cent gradients can be handled easily, while tilt angle has been increased 7º to 35º. Wading depth has been increased by 10mm to 700mm, while the redesign has also delivered minor improvements in departure (31º) and breakover (26º) angles, but approach is unaltered at 30º. 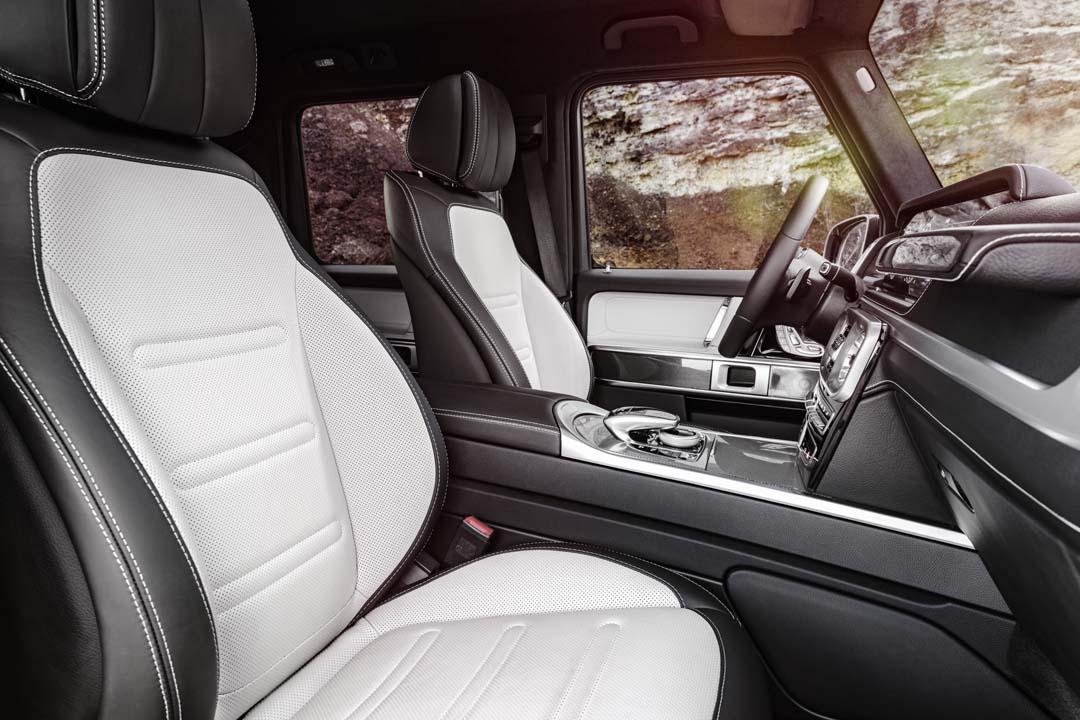 The Dynamic Select drive modes on the new G-Class will come with four basic choices – Comfort, Sport, Eco and Individual – which alter the throttle response, transmission, steering, suspension and input of the driver-assistance systems.

Added to this, and exclusive to the G-Class, is the ‘G-Mode’. This off-road mode is designed to improve performance in rugged terrain and engages automatically when low range has been engaged or one of the three diff locks has been activated.

Once engaged, G-Mode adjusts suspension damping, steering and throttle response like the other modes, but also minimises gear changes to cater for the slow-speed manoeuvring through mud, rocks or sand that would usually apply when this mode is engaged. 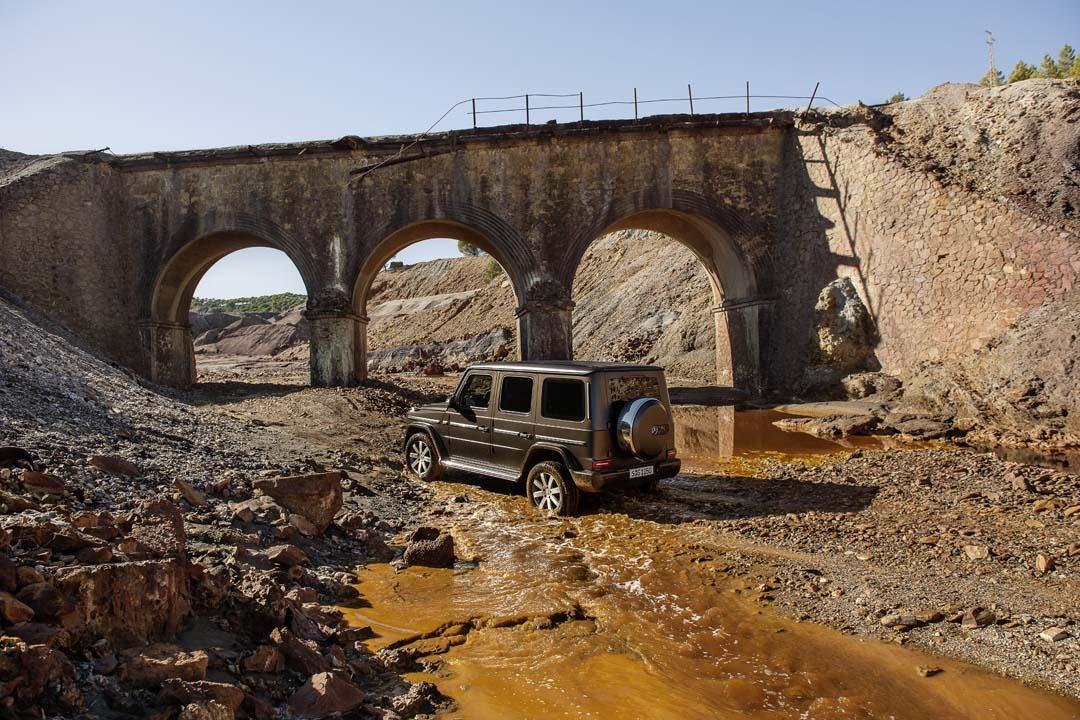 Due for European release in Q2, Australian deliveries of the new Mercedes-Benz G-Class are expected in Q3 or Q4 of this year, with the first locally-available vehiunitcle likely to be an AMG performance variant. Pricing and further details on specs will be announced closer to local release. 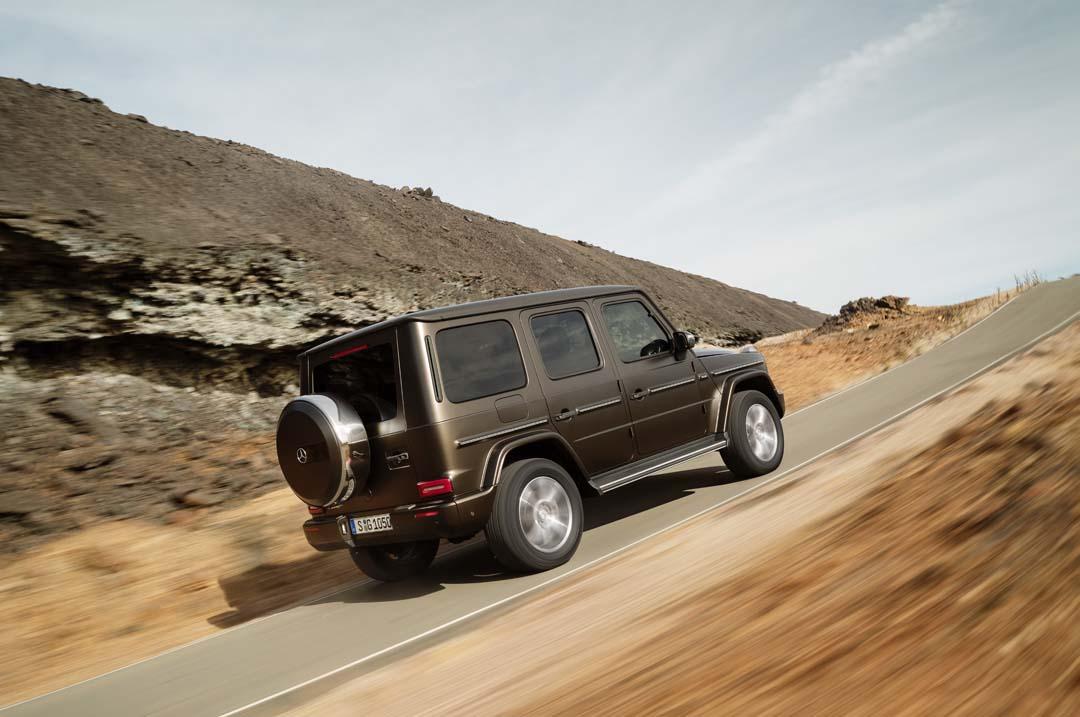