Ford has finally revealed the updated Ranger, using a global online launch on 24 November to present what is a significant makeover of the Australian-developed and engineered T6 platform. 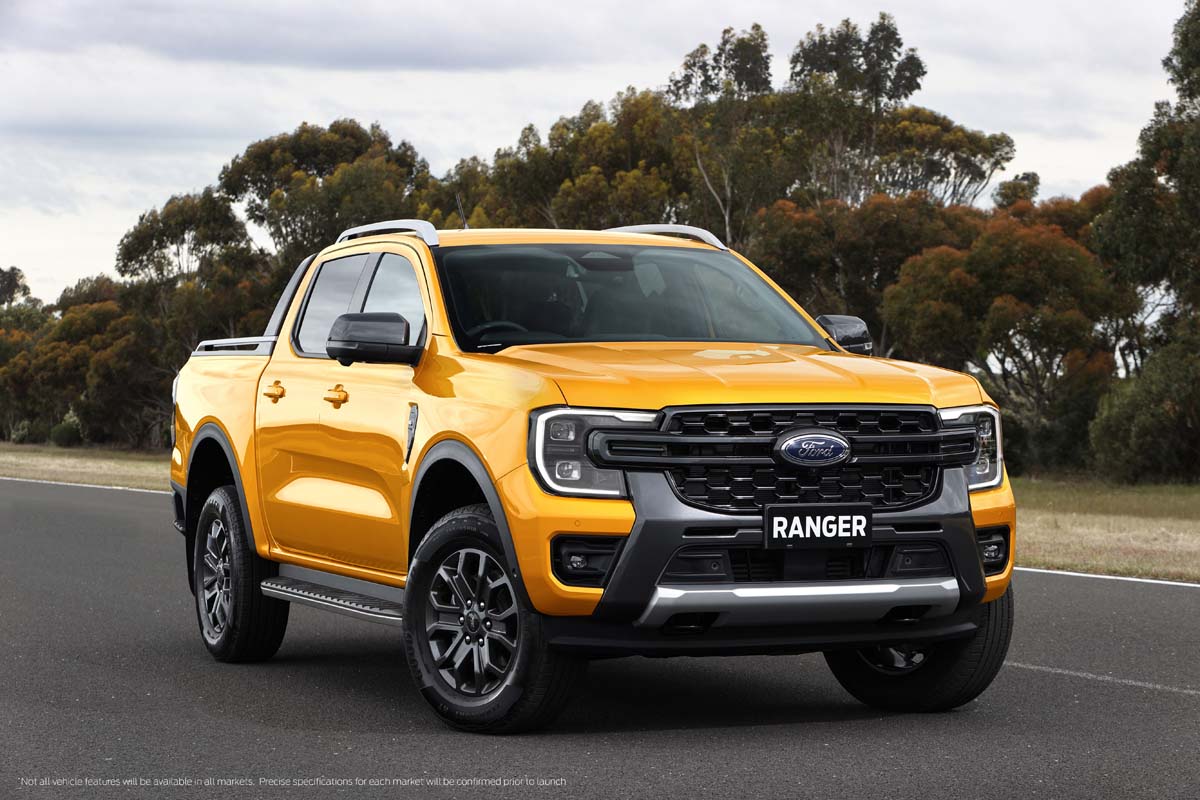 It’s not an all-new generation (even though Ford are calling it ‘next generation’), but there’s virtually no area of the Ranger that hasn’t been touched for this update, with changes to the styling, chassis, dimensions, drivetrain, four-wheel drive system, interior and tech. 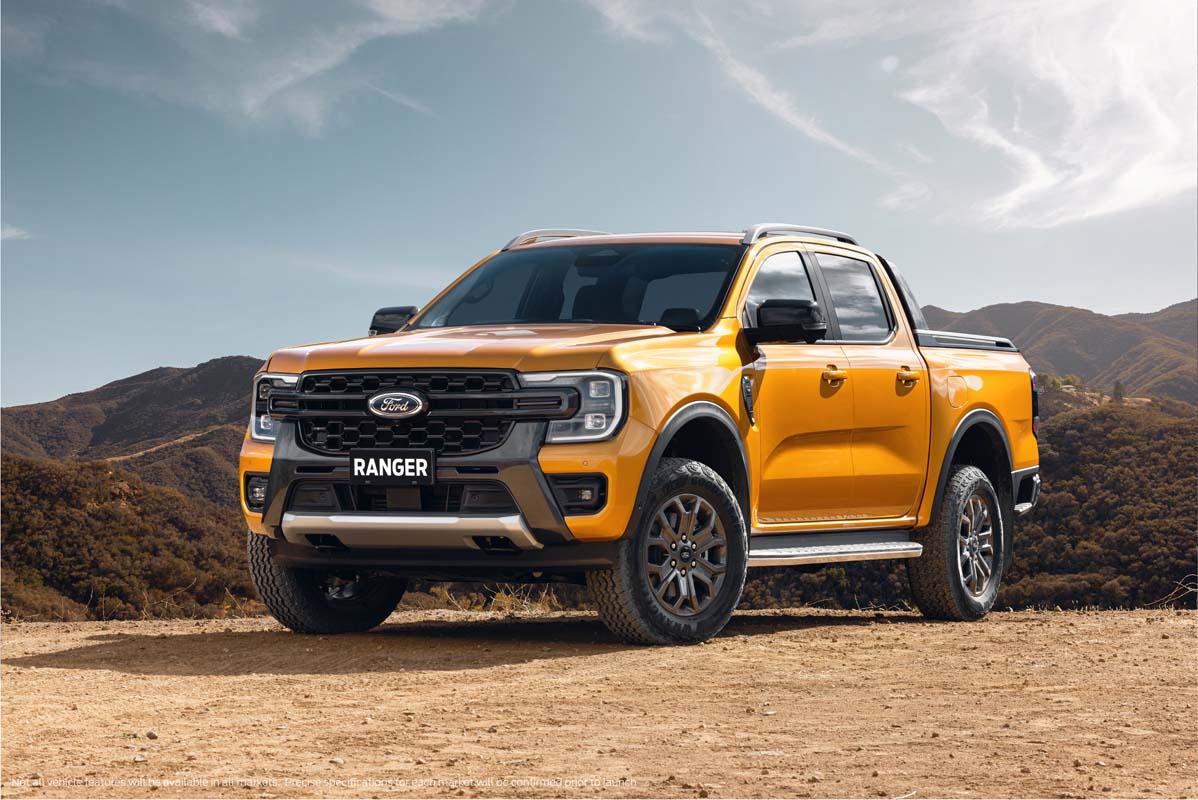 The Ranger’s reintroduction into the US market in 2019 arguably fast-tracked this upgrade and influenced some of the styling changes, too, with North America to be the first recipient of the updated ute/pickup, followed by other markets. Australian release is expected sometime in mid-2022. 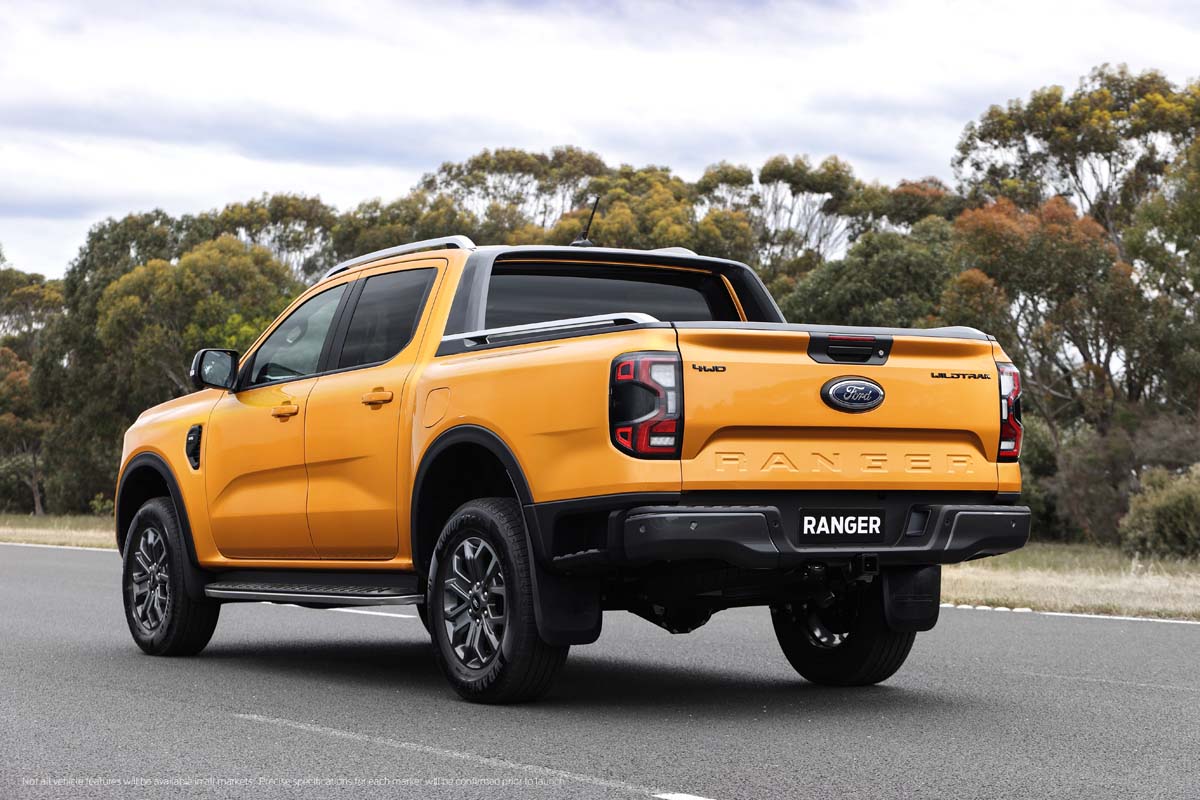 For the US market, this update will come with an expansive customer service initiative that promises a “great new experience” and “lifestyle enhancement”, including service pickup and delivery, streamlined service booking options, a concierge programme and more.

For Australia, expect a little less hyperbole, but a similar approach to aftersales support as Ford aims to unseat Toyota’s HiLux as our top-selling new car. 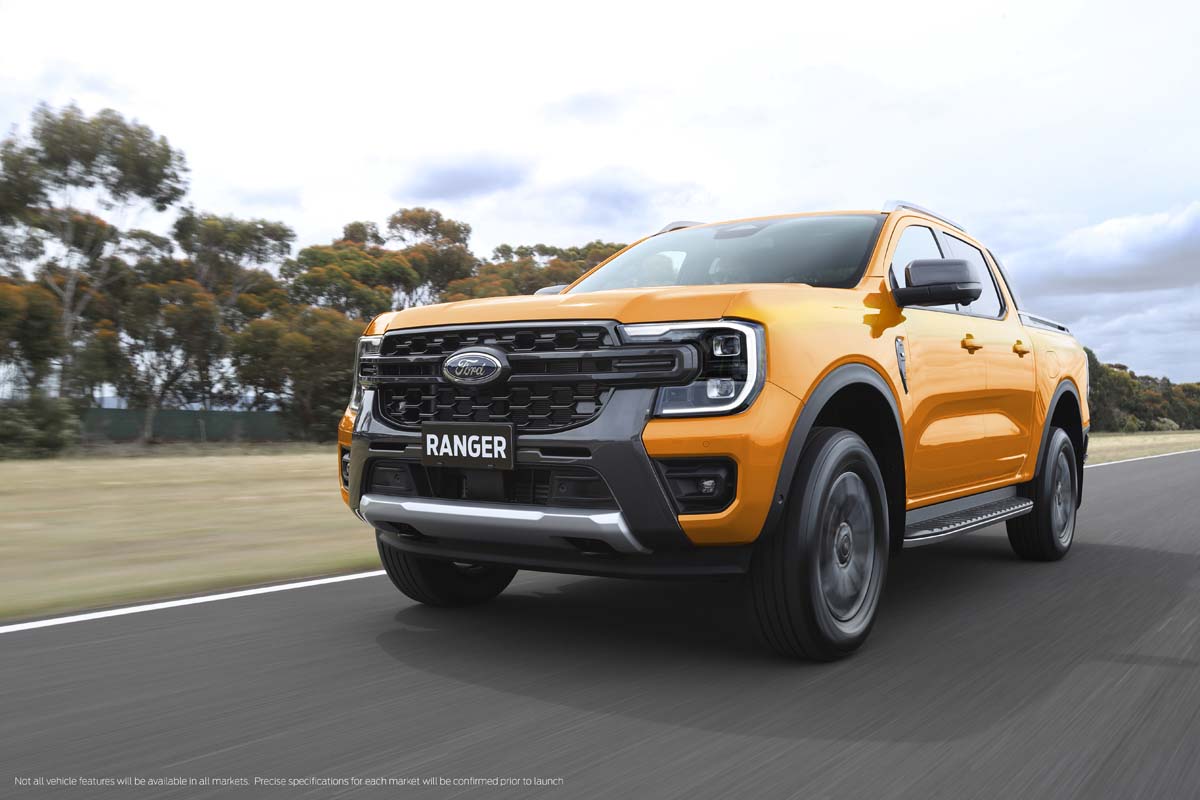 While development of the new Ranger was undertaken at Ford’s Product Development Centre here in Australia, what’s been added, altered and updated was led by an extensive global customer research programme, including 5,000 interviews and dozens of customer workshops to find out what pickup/ute buyers wanted. 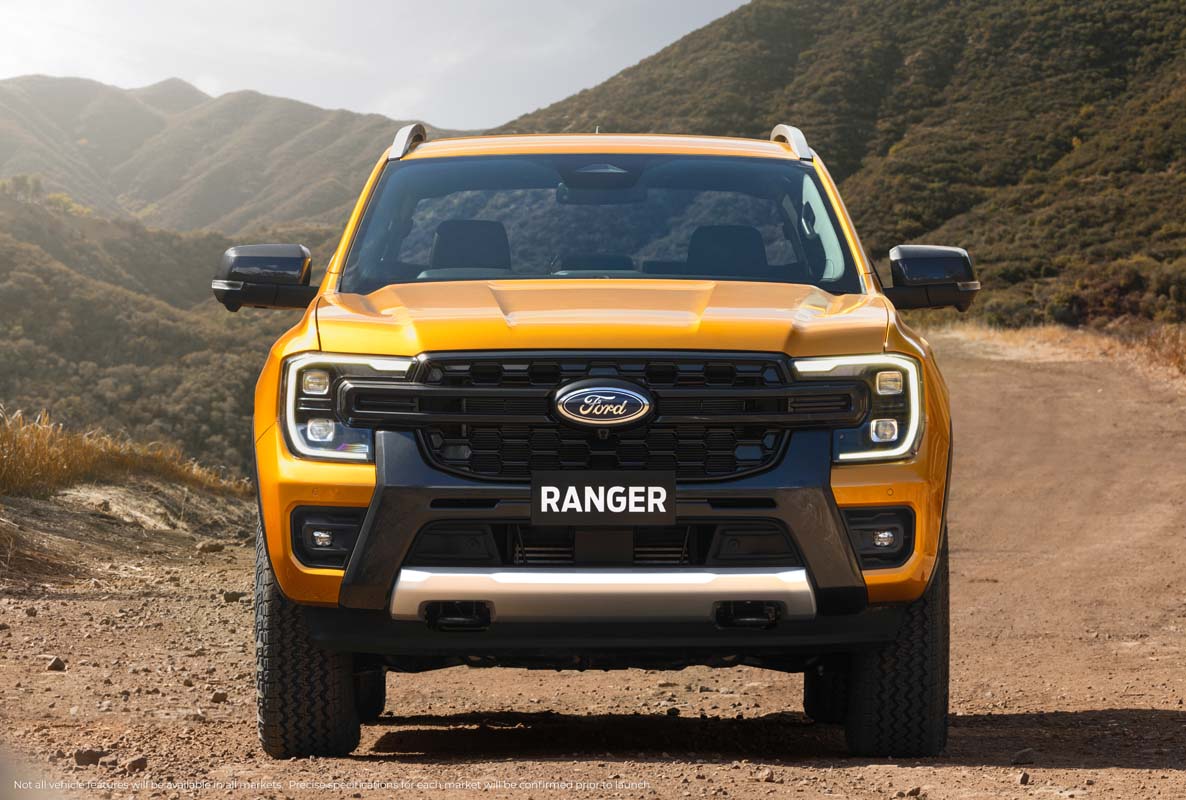 The results of that feedback started with the styling, with many elements from the latest US market F-150 translated to the Ranger, including the grille and C-shaped headlight design, modified lower front bumper, reshaped front guards and rear quarters, a broader shoulder line, modified tailgate and new-look tail lights. 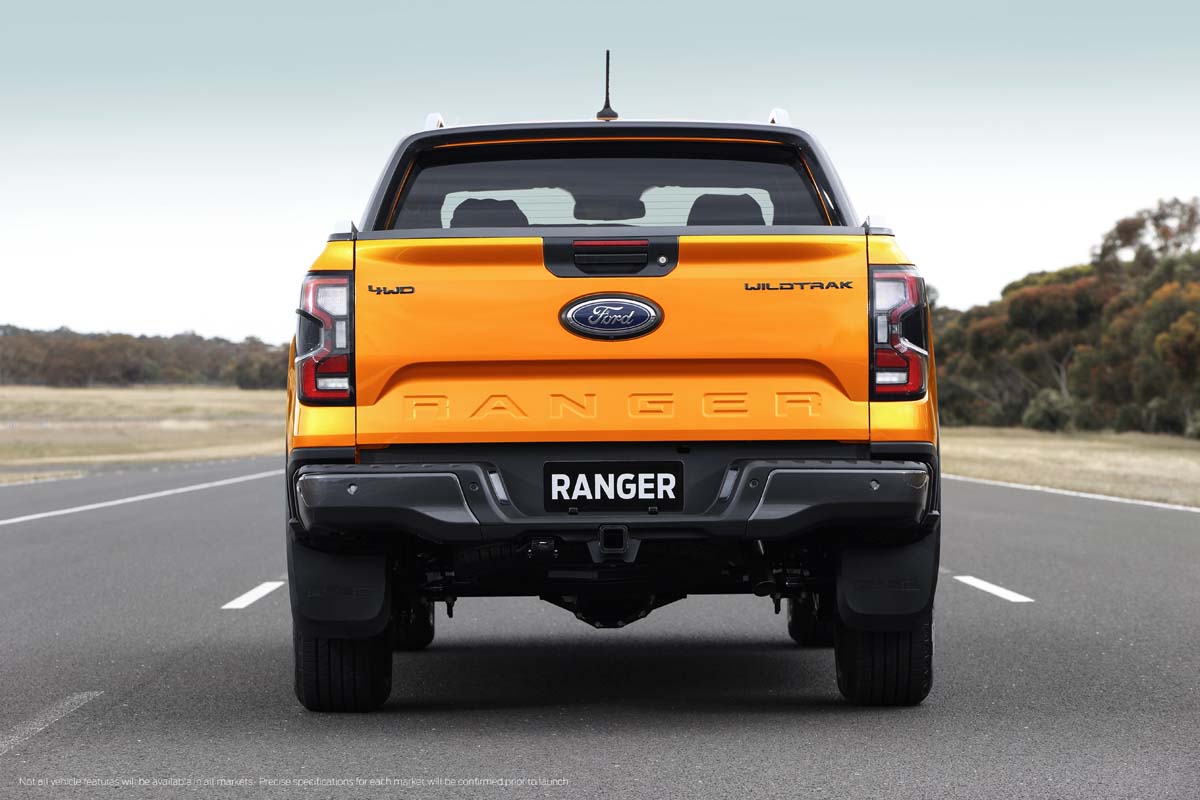 Between the wheelarches, there are no major changes, but the other styling makeovers, particularly at the front end, give the new Ranger a bigger and much boxier look overall.

Not all of that is visual trickery, as while the overall dimensions are almost identical to the current Ranger, the wheelbase on the new version has been extended by 50mm and the track widened by 50mm as part of a chassis upgrade that also includes a new front-end structure to allow the installation of a V6 engine. 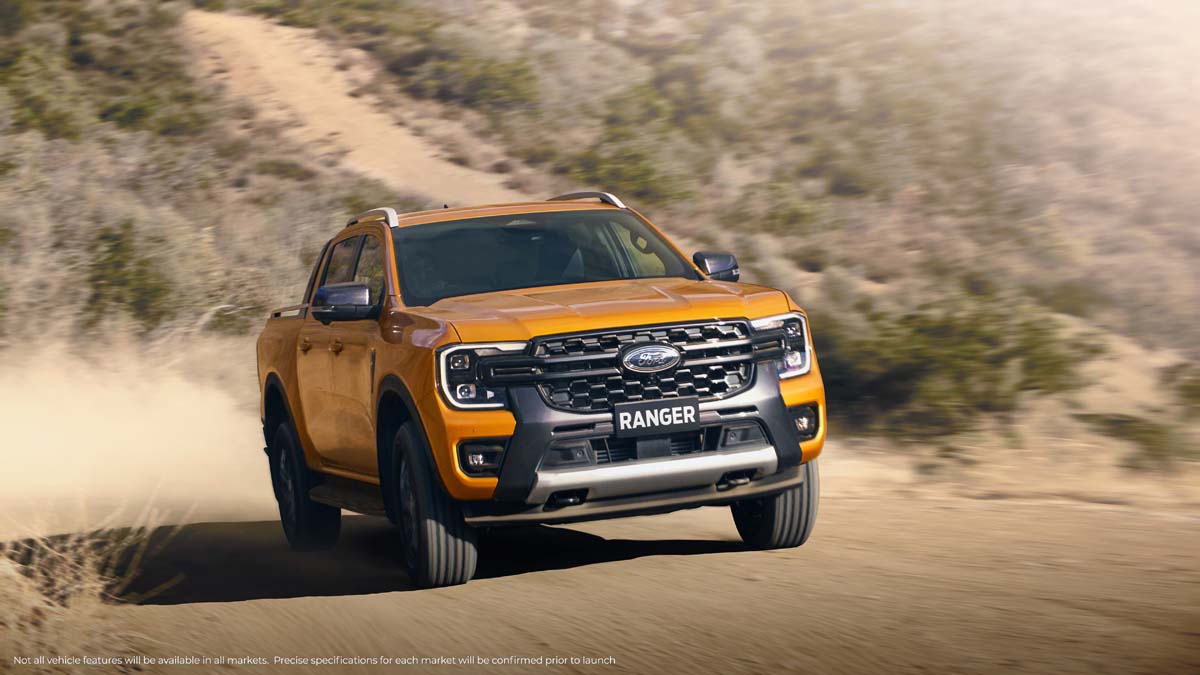 Catering for a V6 is another US-led initiative, as the Ranger’s “mid-size” pickup rivals in the North American market, like the Toyota Tacoma, are available with a V6 petrol engine.

The V6 is a 3.0-litre turbodiesel previously used in the F-150 (and in Land Rovers before that), which will join single turbo and bi-turbo 2.0-litre four-cylinder diesel options on the Ranger for the US market.

The 2.0 bi-turbo is already familiar to Aussie Ranger buyers, being available in the Raptor, Wildtrak, FX4 and XLT grades. The single turbo version will be a new addition, should it be offered here, and claims to offer fuel economy benefits. 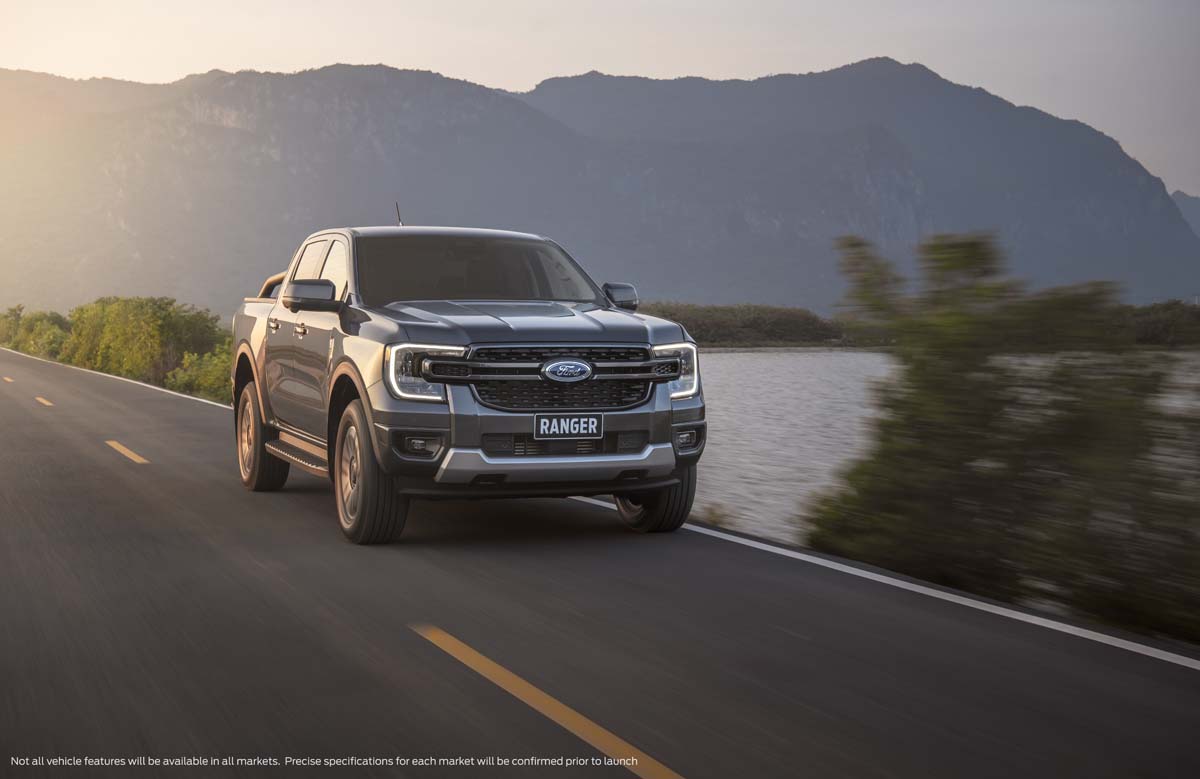 No mention is made of other engine options, so the Ranger’s existing 3.2-litre five-cylinder turbodiesel and 2.2-litre four-cylinder diesel are likely to be axed. And while the new V6 isn’t guaranteed for local release, we’ll almost certainly get it, allowing the Ranger to go head-to-head with VW’s Amarok V6.

On the transmission side of things, a six-speed automatic is carried over and the ten-speed version is updated, but there’s no mention of a manual. However, even with automatics accounting for the vast majority of new vehicle sales, assume a six-speed manual will continue to be offered.

Ford says the more expansive engine bay also future-proofs the Ranger, allowing for other drivetrains – including electric – to be added in the future. 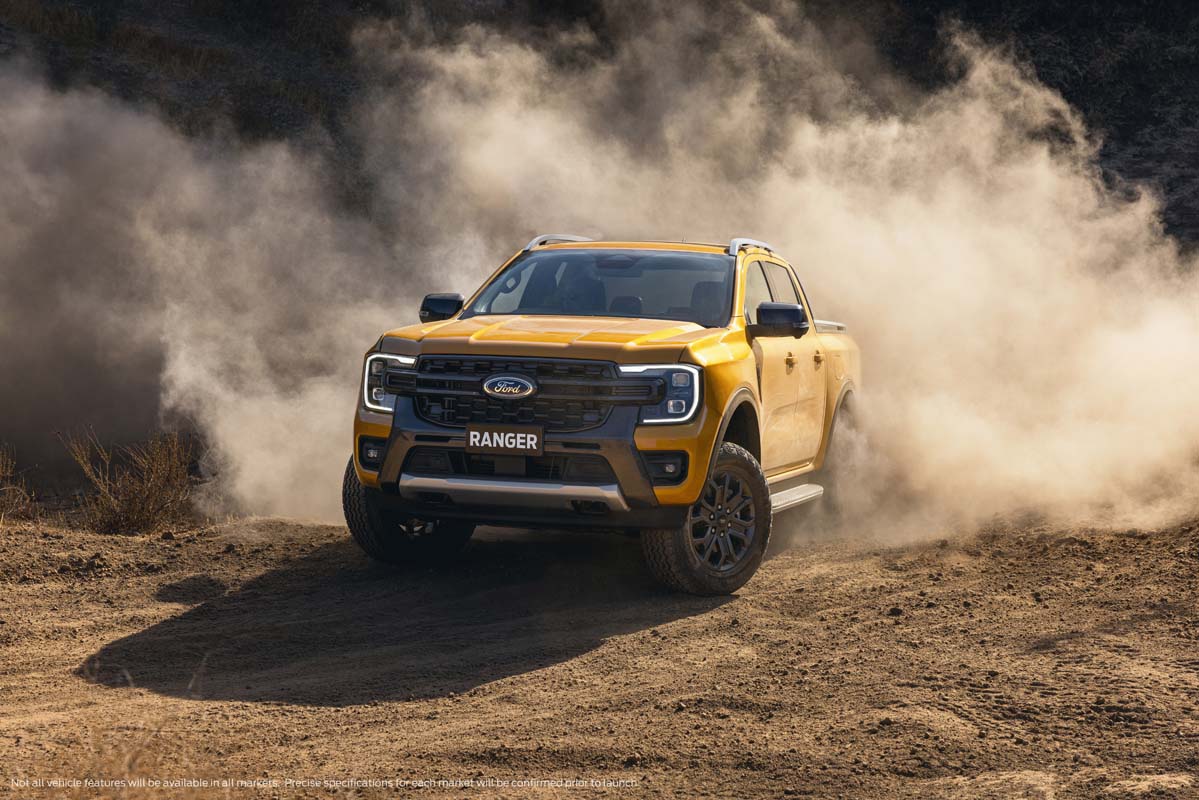 Reflecting the mission of the current Ranger to meet many requirements, the update will be the same, offering two- and four-wheel drive, but there is more a bias toward the latter.

“On one end, you have small business owners looking for work-oriented transportation. They want traditional two-wheel drive with a single cab and a load box to transport their goods,” said Graham Pearson, Ranger vehicle program director.

“At the other end, you have the serious off-roaders who really push their Rangers to the limit. The Ranger will meet the needs of both types of customers and everyone in between.” 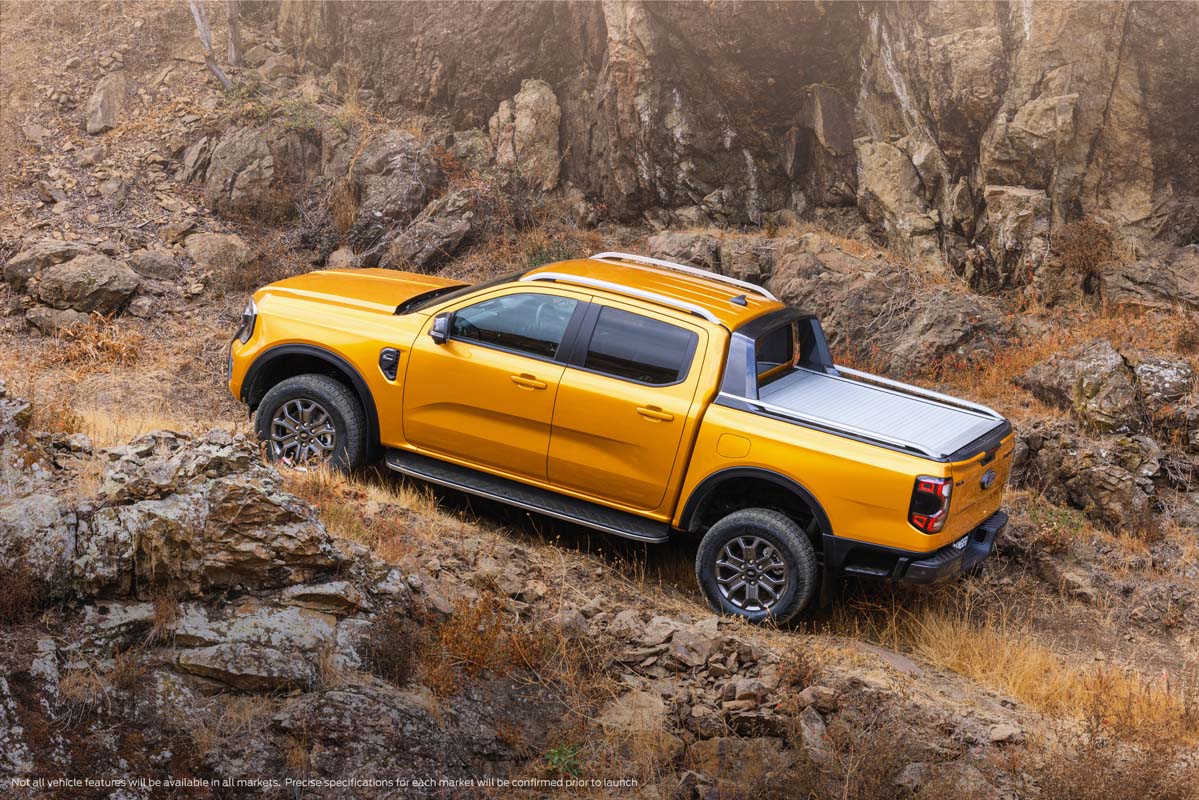 Rear shock absorbers have been relocated to outside the chassis rails, which improves ride both on- and off-road, as well as laden and unladen, according to Ford. 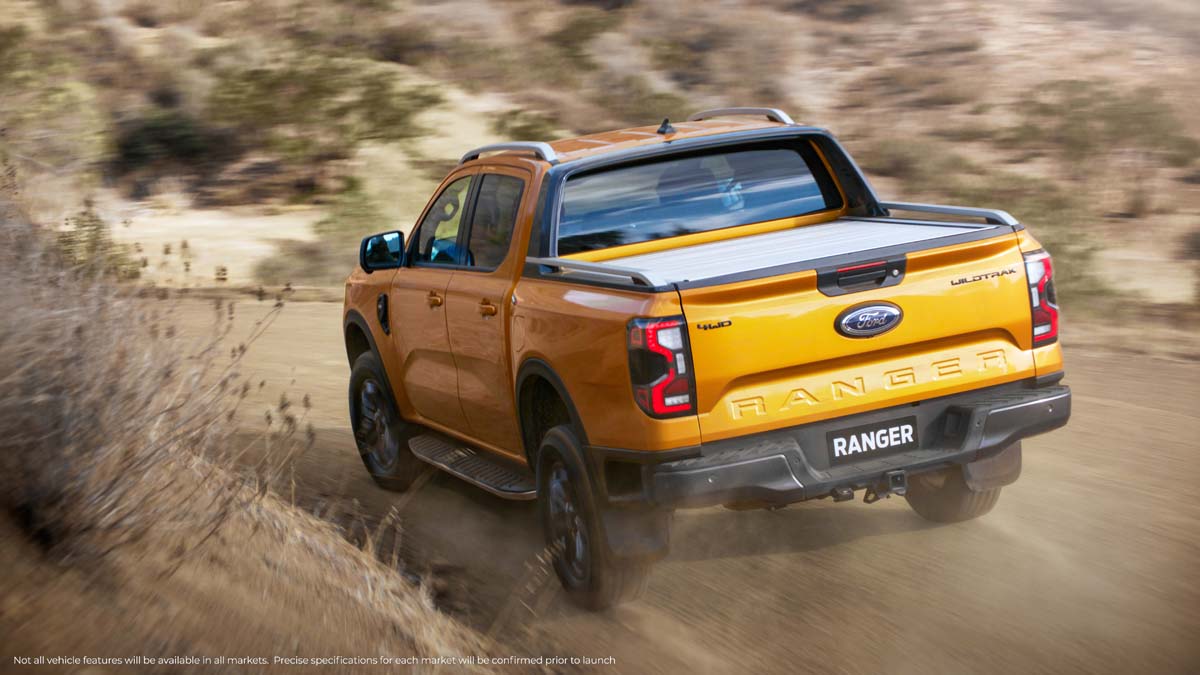 Two different four-wheel drive systems will be offered: an electronic shift-on-the-fly part-time system for light duty; and a more advanced full-time dual-range system that also has an automatic mode and diff locking.

Tow hooks will be incorporated into the front bumper, but these will presumably only feature on the Raptor, Wildtrak and Ranger grades with the full-time 4x4 system. 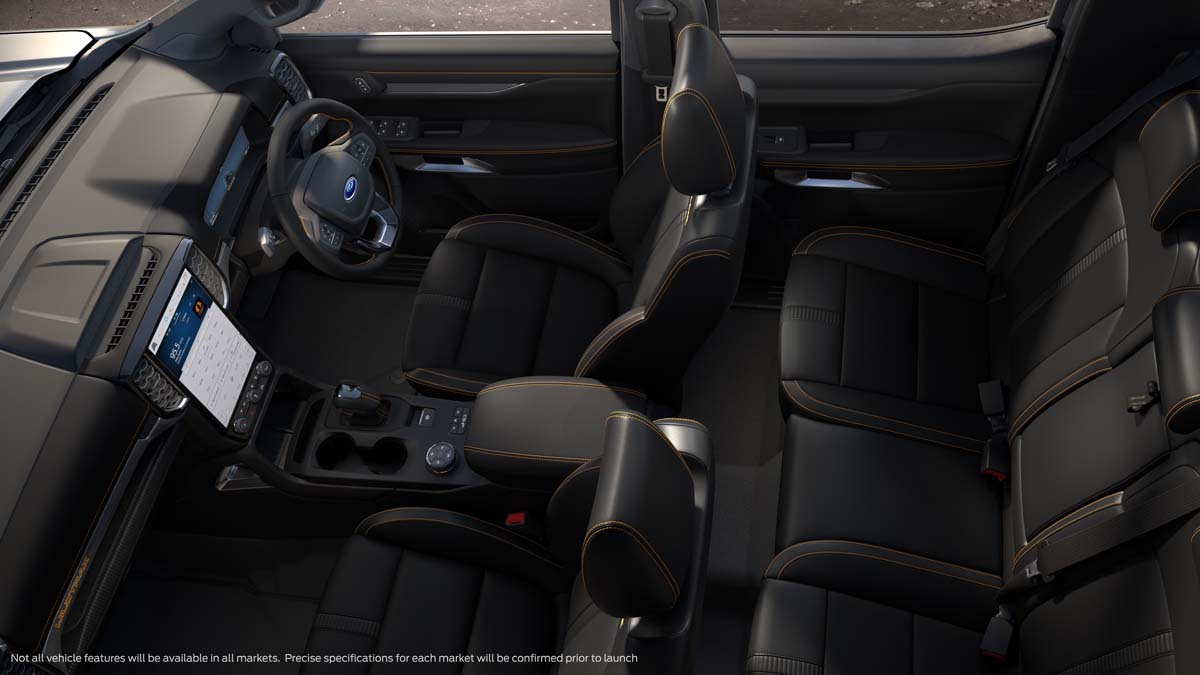 Depending on model grade, there’s a 10- or 12-inch vertical centre console touchscreen, as well as a fully digital instrument display. 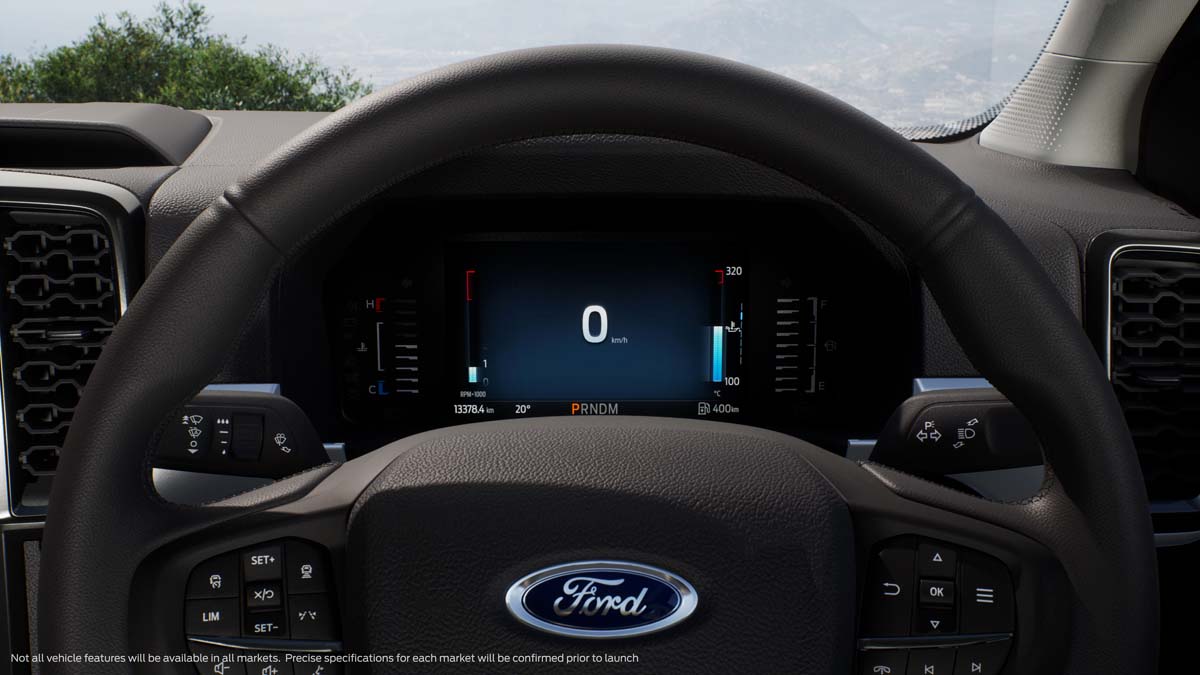 Ford’s SYNC4 infotainment system is standard and includes voice-activated commands, with most of the tactile buttons and switches now moved to the touchscreen, although a rotary dial four-wheel drive mode selector remains. 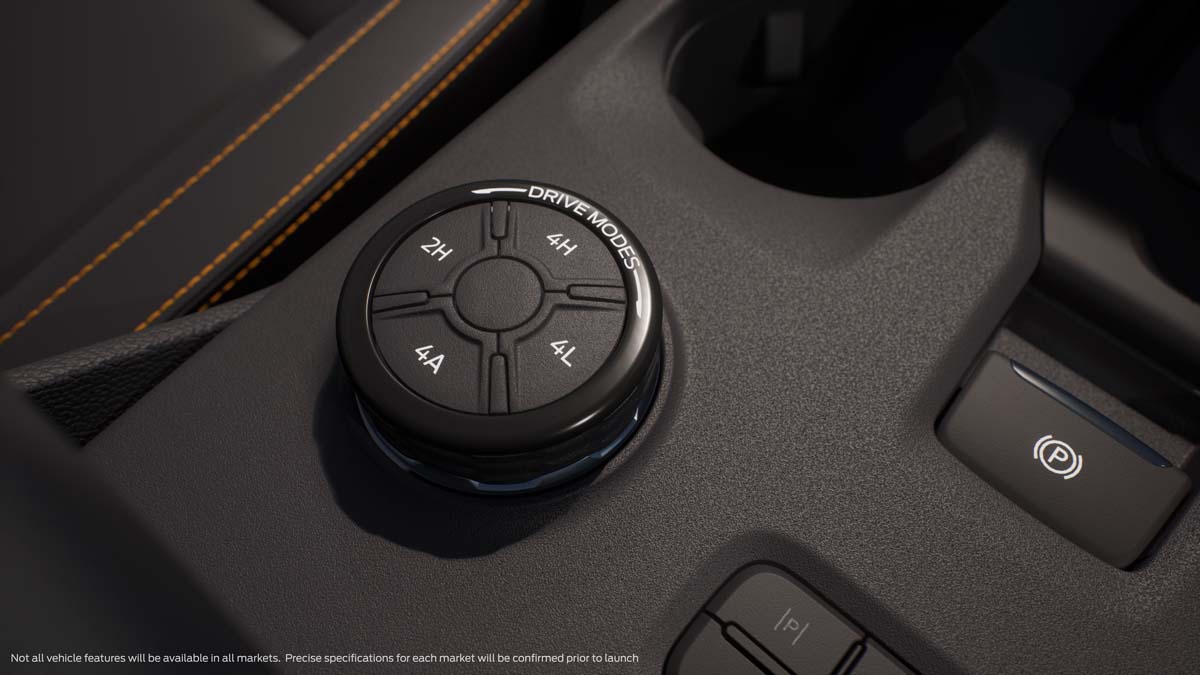 A 360-degree camera is also standard, offering benefits when parking and negotiating tough trails, while new exterior ‘zone lighting’ can illuminate the area around the ute and is also remotely adjustable via the FordPass smartphone app. 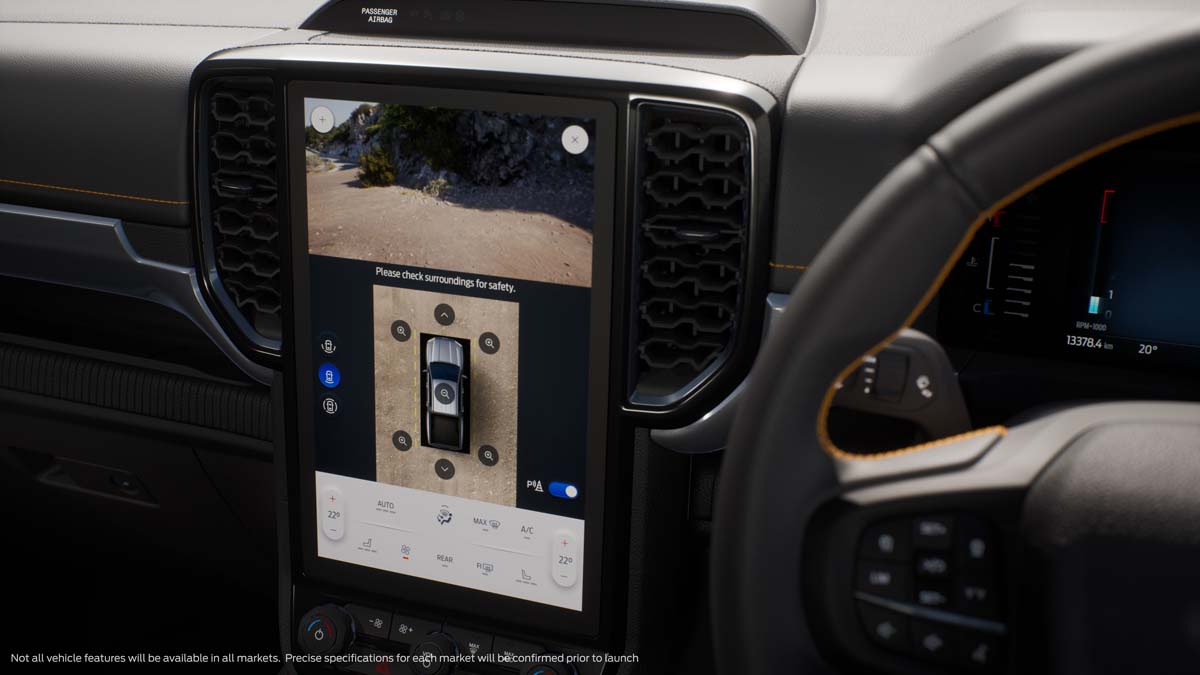 With the smartphone being key to some of these functions, a wireless charge pad is standard.

An embedded modem, linked with FordPass, allows remote locking/unlocking, vehicle status checking and even remote starting with your smartphone. 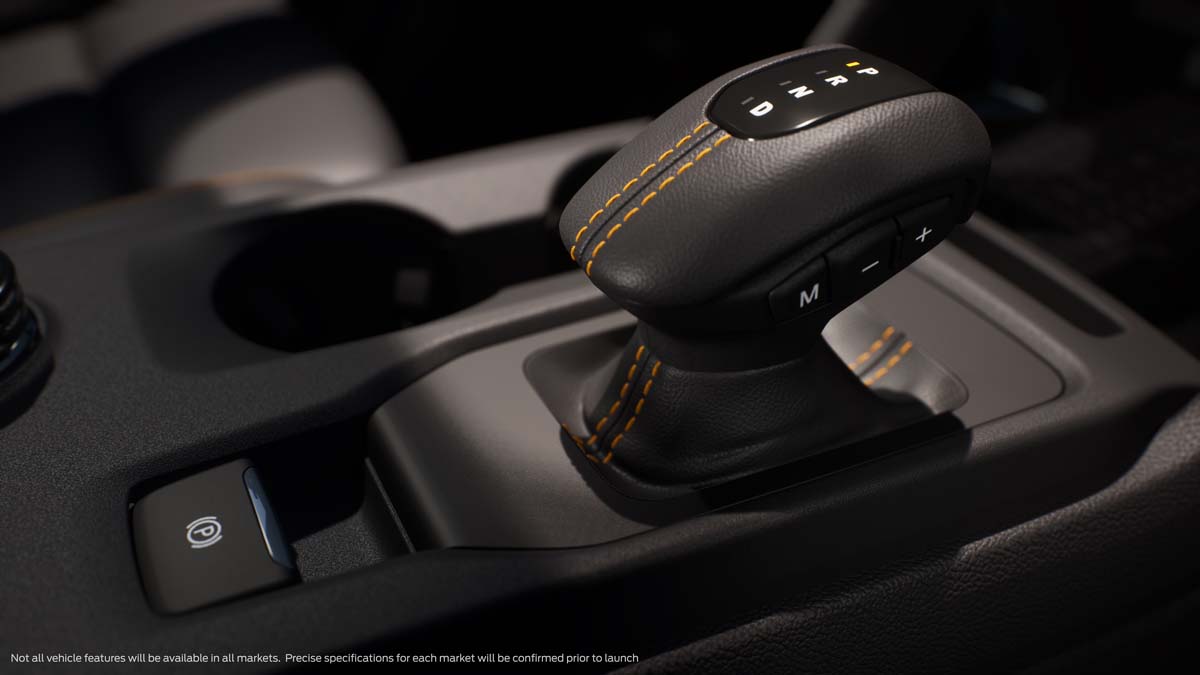 Ford don’t elaborate on how the new cabin is more comfortable beyond a new shifter design, but they do list all the storage options, which include a big centre console bin, larger door pockets and storage bins both under and behind the rear seats in dual cab variants. 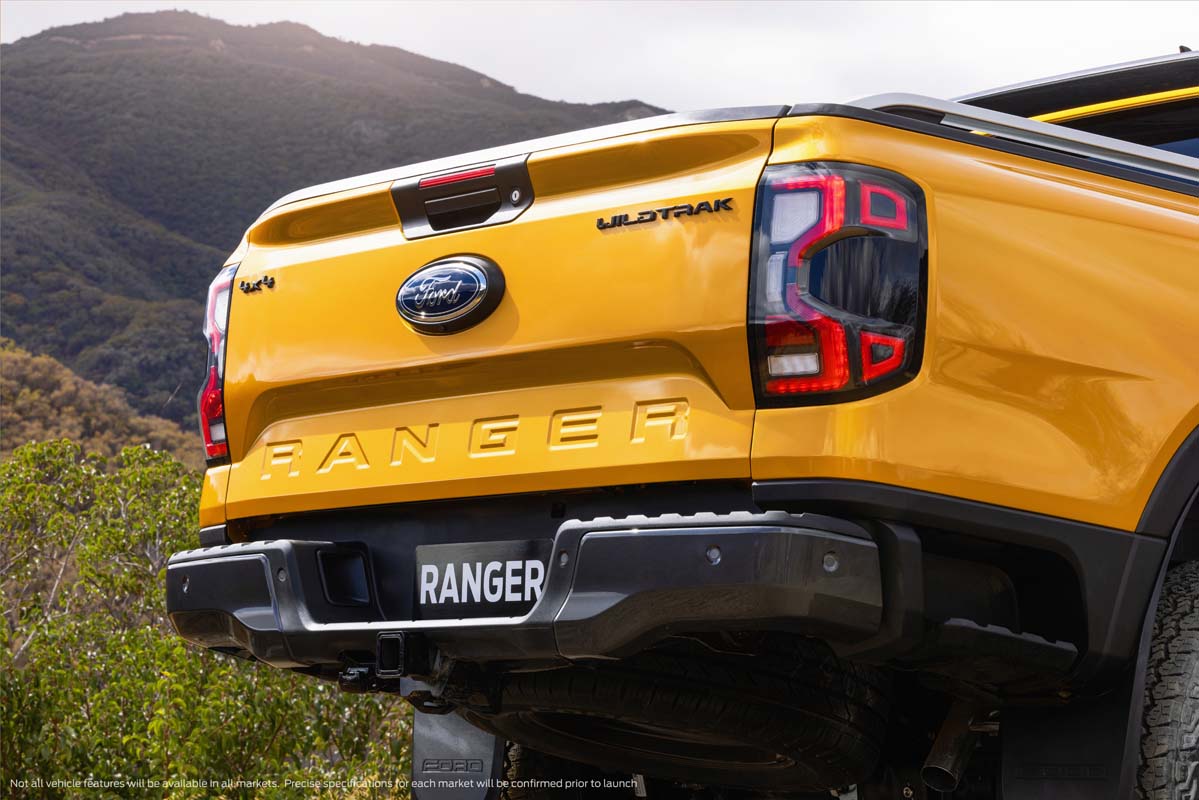 Away from the tech developments, some of the more tangible improvements made to the new Ranger include integral rear steps aft of the rear wheels to access the cargo tub, while the wider track means a conventional pallet can now fit between the wheelarches. 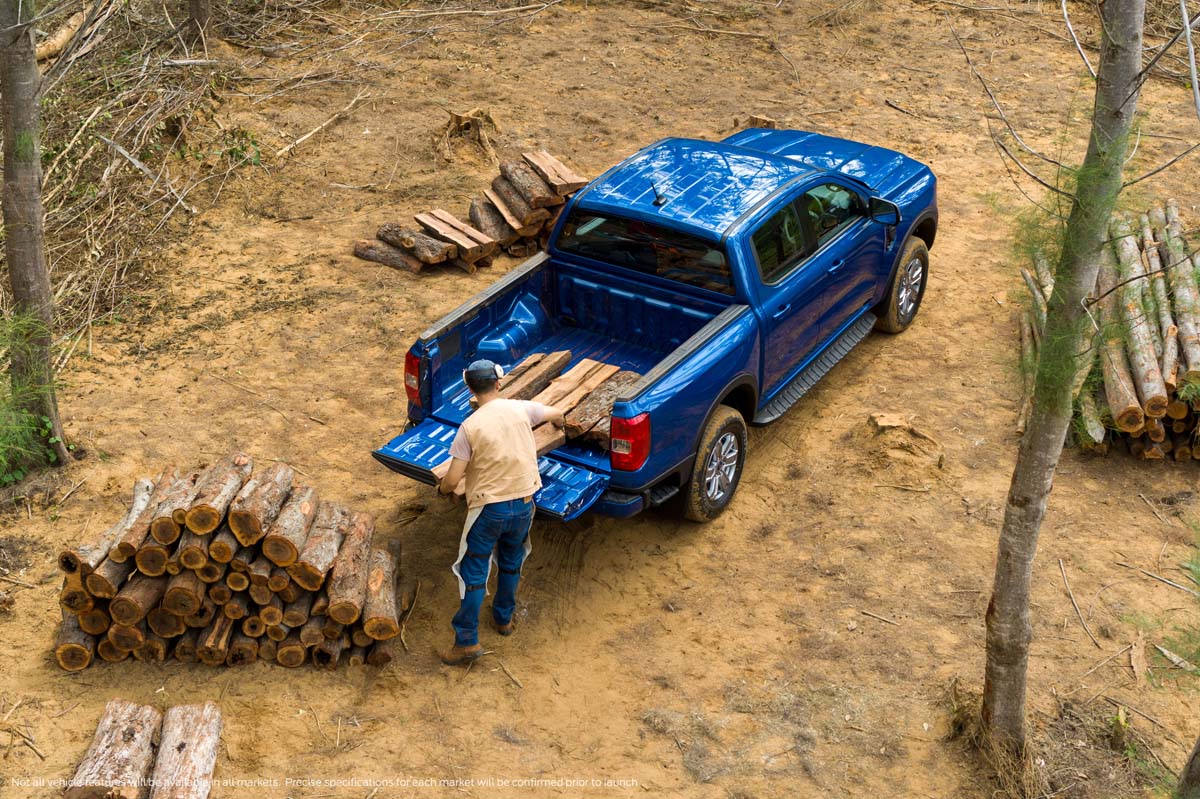 A moulded-plastic tubliner and additional tie-down points also feature, while tough plastic capping on the sides of the tub include provision for mounting canopies, ladder racks and other accessories.

There’s also a new cargo management system that is configurable to hold all manner of loads, including smaller items, thus freeing up interior space. The tub has integral lighting, too.

Finally, taking a touch already applied to the larger F Series trucks, the tailgate is designed to function as a workbench, with g-clamp pockets and a ruler built in. 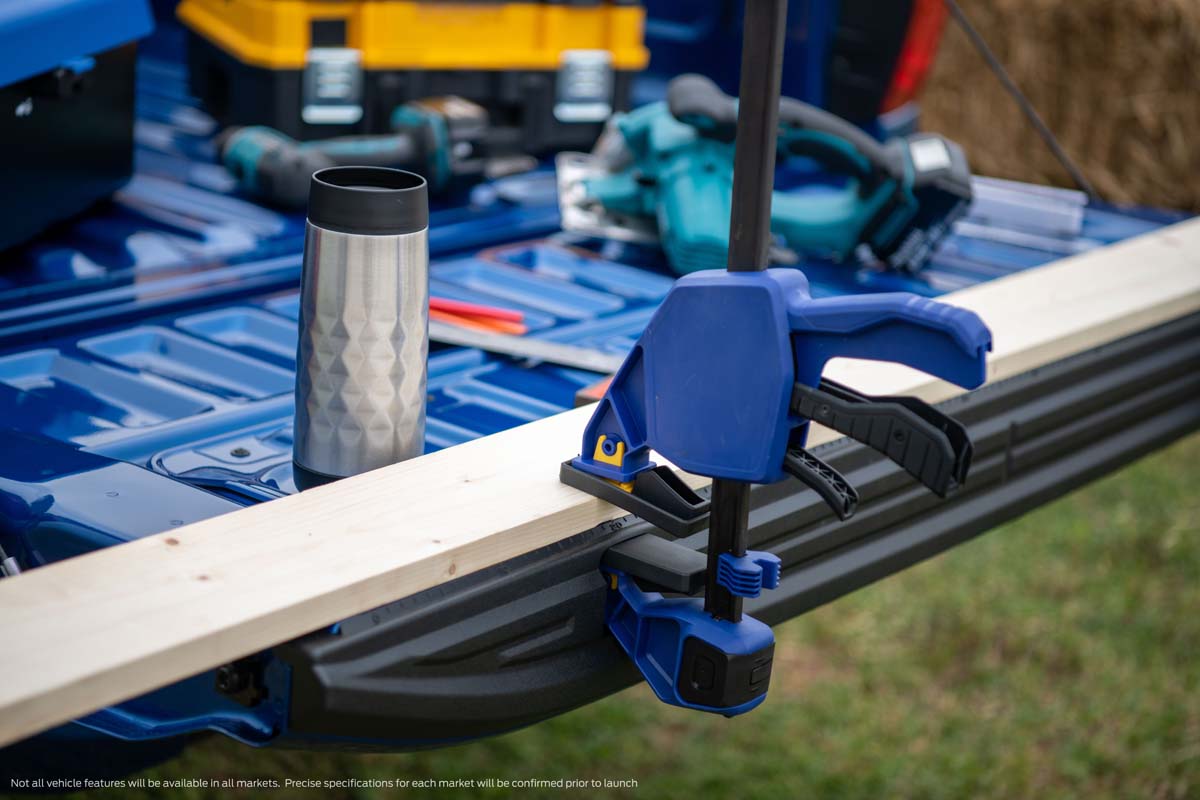 While Australian Ford dealers will start taking orders for the new Ranger in Q2, 2022, local deliveries aren’t expected until the middle of the year. 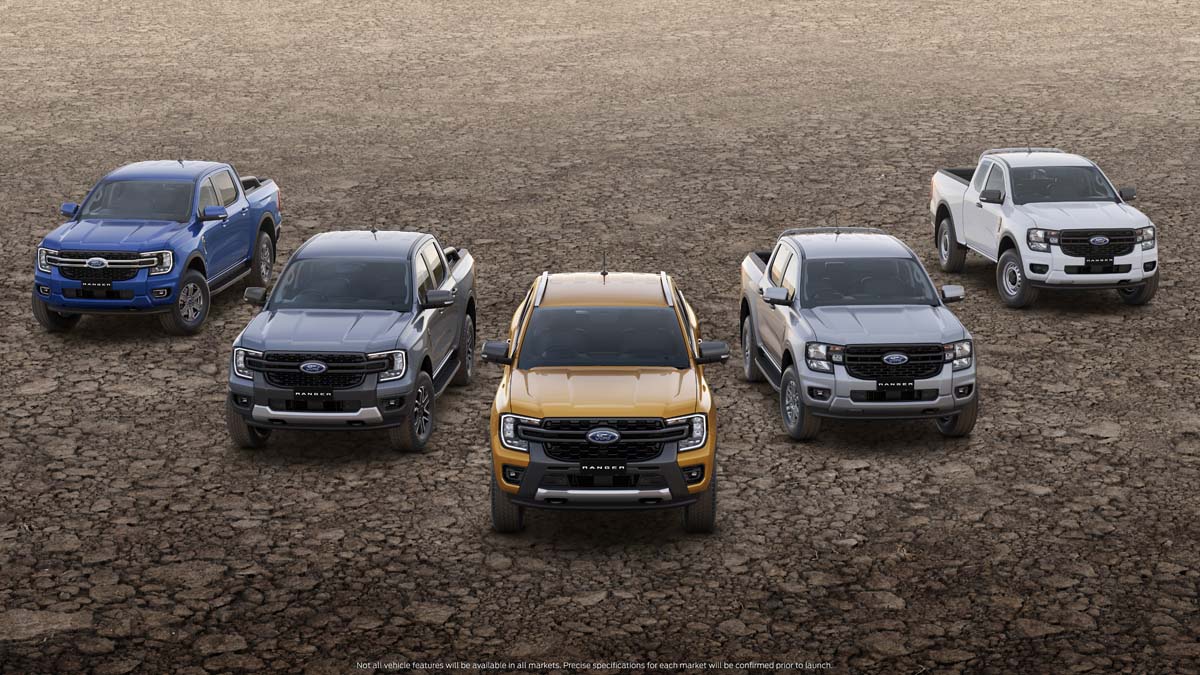 Familiar single, crew and dual cab body styles, along with model grades from the current Ranger – XL, XLS, XLT, Sport and Wildtrak – are all expected to carry over to the new version, and while the Raptor isn’t mentioned in the 24 November release info, it’s likely to be offered on the upgrade, too.

Further details on the new Ranger, including full specs, pricing and delivery confirmation, will be released closer to local launch.