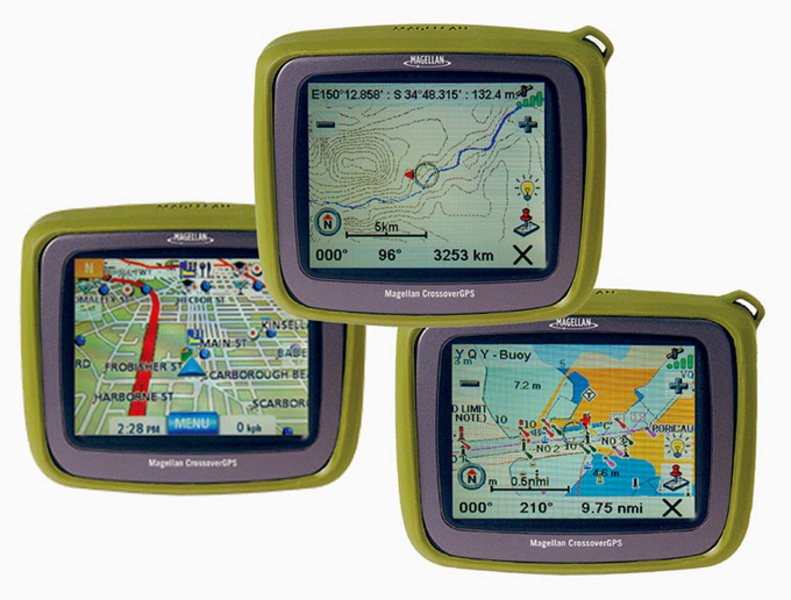 The Magellan CrossoverGPS uses new technology set to break free from the shackles of traditional sat nav and provide you with the options you want. Over streets, over land and over water, you can now use the one unit for voice prompted street directions, topo maps with 4WD trails, outback tracks and marine charts. No longer do you need a separate unit for each application, with the Magellan CrossoverGPS with bright 3.5" touch screen, you can crossover with ease. Navigate city streets with voice guidance, using Navteq data, the world's leading road mapping data provider for PND products, SmartDetour for avoiding traffic obstacles, MP3 player and picture viewer. Or cross over to the bush and access country streets, sealed and unsealed roads, 4WD tracks, trails and topographic map contour lines for all of Australia using DiscoverAus Streets & Tracks Topo on SD card (sold separately).

Mark out waypoints, keep a breadcrumb trail, save routes and track logs, and don't worry if you are out for a while with an eight hour internal battery to keep you going. You can even take it touring on all your great desert tracks and through outback Australia with the new DiscoverAus Outback Tourer on SD card (sold separately). Cross over to the water for a portable, splash proof chart plotter with XL3 marine charts, showing you depth contours, navaids, port services and more, using Magellan MapSend BlueNav XL3 Oceania marine charts (sold separately). The brand new Magellan CrossoverGPS is now available.

View contour lines and 3D vertical profile or connect to MapSend Lite V2 (free download) to plan your routes in advance or view track logs on the big screen or your PC. Save unlimited waypoints, routes and tracks via SD card memory expansion and rely on the Truefix technology for maximum accuracy and reliability, even under dense tree coverage. Standard with Australian base map you can purchase additional Magellan mapping including Australian made Discover-Aus Streets & Tracks Topo, Discover-Aus Street by Street and Magellan Map-Send BlueNav XL3 Oceania marine charts.

Smart fuel delivers continuous caravan and motorhome power:
The Smart Fuel Cell (SFC) uses methanol based technology to provide caravans and campervans with an alternate energy source that is efficient, reliable and safe. Conventional batteries providing power and light inside caravans and motorhomes drain quickly when a plug-in power source is not available during camping or touring. The SFC is ideal for caravans and motorhomes as it connects to the existing battery, automatically recharging it to maintain constant power in remote locations. It is maintenance free and supplies power for several thousand hours.

The SFC controls the state of charge and recharges batteries automatically, even when power consumption is higher in the extremes of winter and summer. Cell technology works by converting chemical energy directly into electricity, making the SFC highly efficient. The crucial technical difference between fuel cells and conventional batteries is the separation of the energy conversion and energy storage processes. The fuel cell will continuously produce electric current as long as gaseous or liquid energy sources are supplied. Both methanol and hydrogen are popular choices as a fuel source because they have a low operating temperature.

Methanol was chosen for the SFC because, unlike hydrogen, it is inexpensive, lightweight, safe and easy to handle. SFC methanol fuel cartridges can be changed in seconds, even during operation, to provide uninterrupted usage. Each SFC fuel cartridge is equipped with a safety valve to prevent spillage, protecting the user from contact with methanol. German company SFC Smart Fuel Cell AG has developed and produced the SFC with SFC technology now used in a variety of remote locations where conventional power is not available. It is a quiet alternative to diesel generators and is designed to operate in extreme cold and heat. The A50 is the most popular SFC model for caravans and motorhomes because it is small and weighs only 8kgs. The A50 can be easily installed under-floor or internally in the caravan or motorhome.