New into the shed is the Jeep Gladiator, a dual cab ute from the US car brand. And of course, it is the top-spec Rubicon that comes with added 4x4 ability.

It is similar in many ways to the Wrangler of the same specification, but with a ute tray. Jeep says that the engineering is different from the A-pillar back. Obvious visual differences aside, the most significant change comes underneath the rear wheel arches with a Fox suspension five-link arrangement, similar in some ways to the Ford Ranger Raptor. 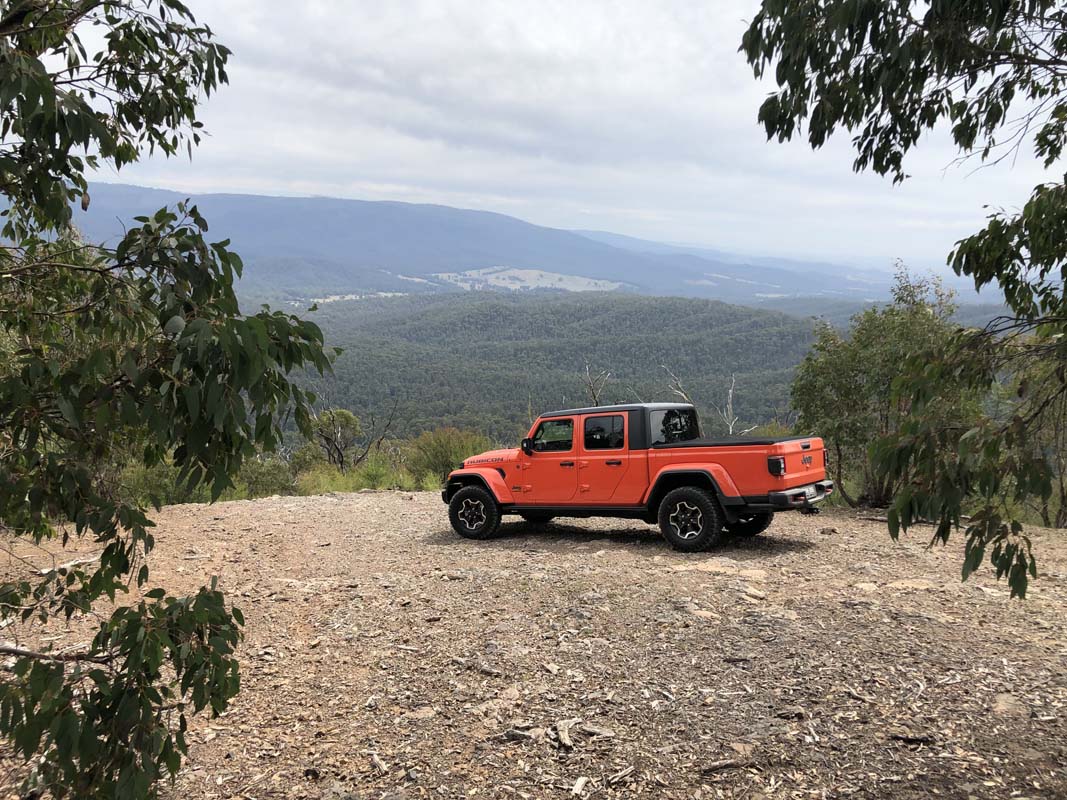 But unlike the blue oval rival, there is no diesel engine, instead powered by only a petrol V6. The 3.6-litre produces a fairly vigorous 209kW and 347Nm of torque through an eight-speed automatic – there’s no manual. And there’s no diesel in the plan for Australia either, even though it is available overseas. 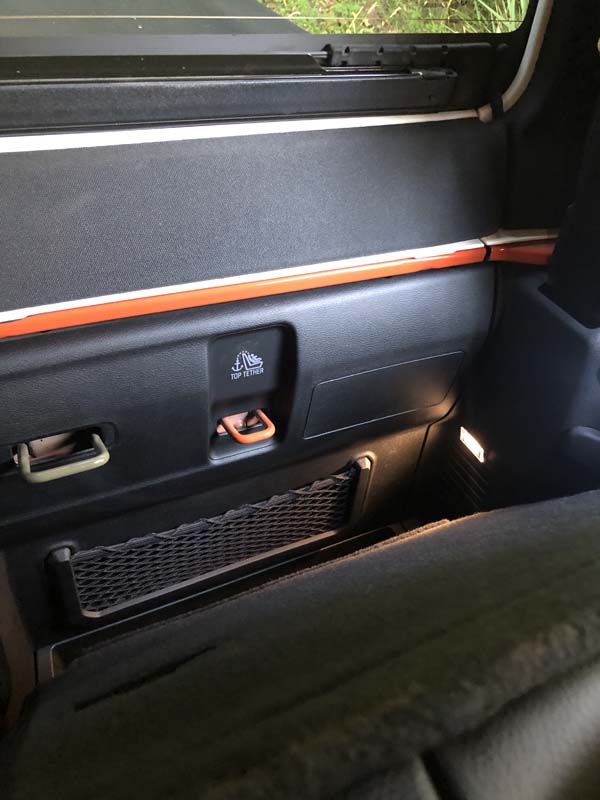 Unlike most dual-cabs the towing capacity isn’t up near 3500kg braked either, limited to 2721kg with a 620kg payload. Again that’s similar to the Raptor. Weighing in at 2215kg and with a 2835kg GVM/5248kg GCM, it leaves you with 348kg for persons and equipment when towing at full capacity. 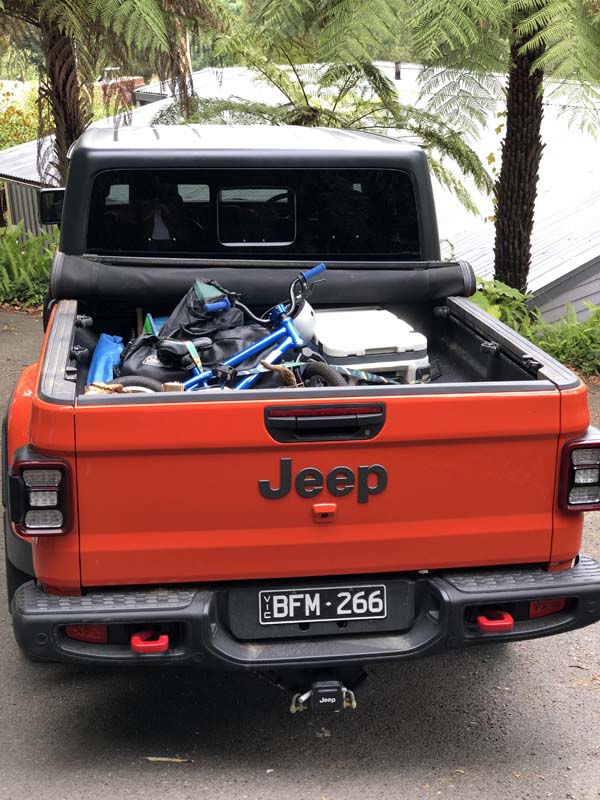 We weren’t so worried about that in our first outing though as it involved an easy get-to-know-me. We left Melbourne towards Taggerty where the Rubicon river is for a riverside camp and some off-roading, reached after a highway cruise and some driving up over the Black Spur. This gave us a varied feel for the Gladiator on the road, a vehicle that has the longest wheelbase (3487mm) of any Jeep in local showrooms. It’s also longer than your usual dual cab ute. 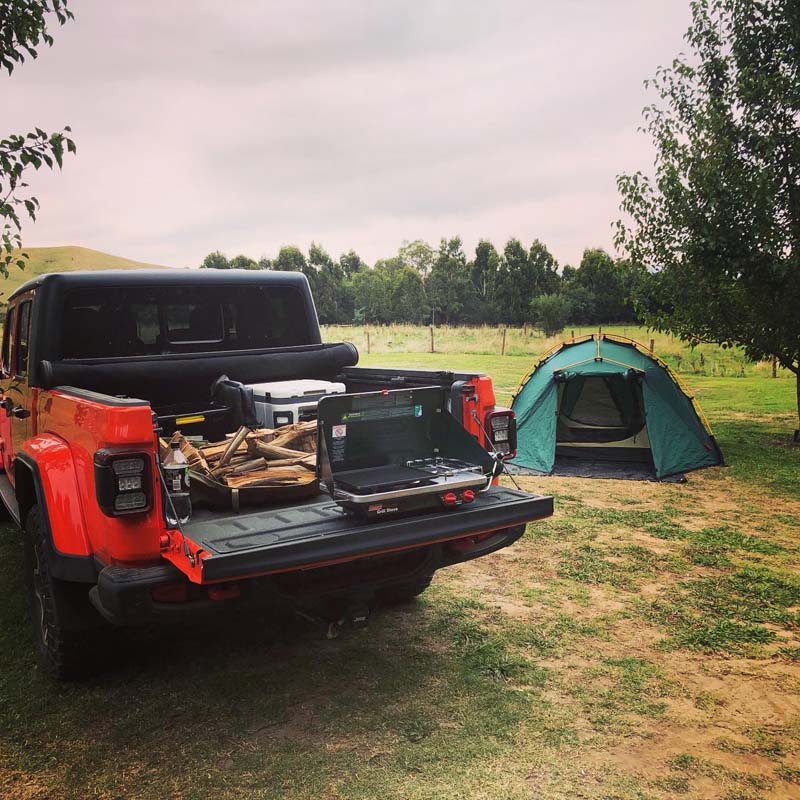 It helps with a confident footing that’s planted and secure, though the top-heavy nature and basic ladder-frame chassis do not provide any special nouse in bends. You can basically chalk this down as a comfortable ute, but not one that is especially at home on the twisting blacktop. 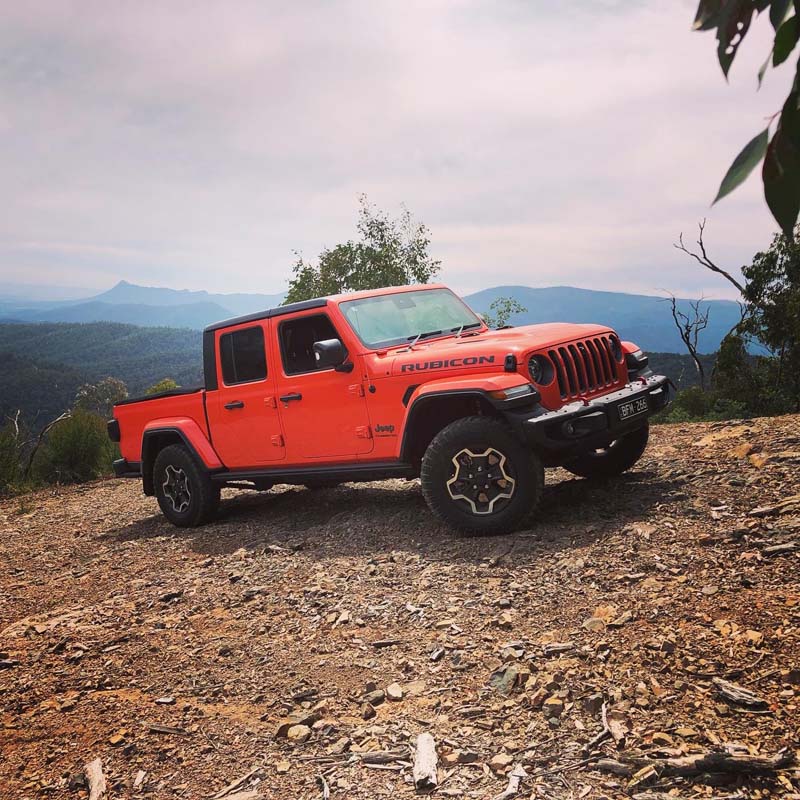 Of course, it changes a lot once you get off the sealed stuff.

Reaching the bush around the Rubicon we instantly get into a shuffle on some loose shale. With the power from the V6 relatively untamed, the rear wheels will light up quick with prodding on the accelerator, so we go into four-high and it grips up fast.

The tracks we're on for most of the day are too easy for the 32-inch BFGoodrich off-road tyres to handle and we don’t really need to get into four-low much either. We’ll fix that with a rigorous off-road test later, but for now, we enjoy some river crossings and track crawling with the family. The wading depth is 760mm, plenty, and the ground clearance 249mm – certainly enough. But the critical factor will be that long wheelbase when we get into some more technical off-roading another time. 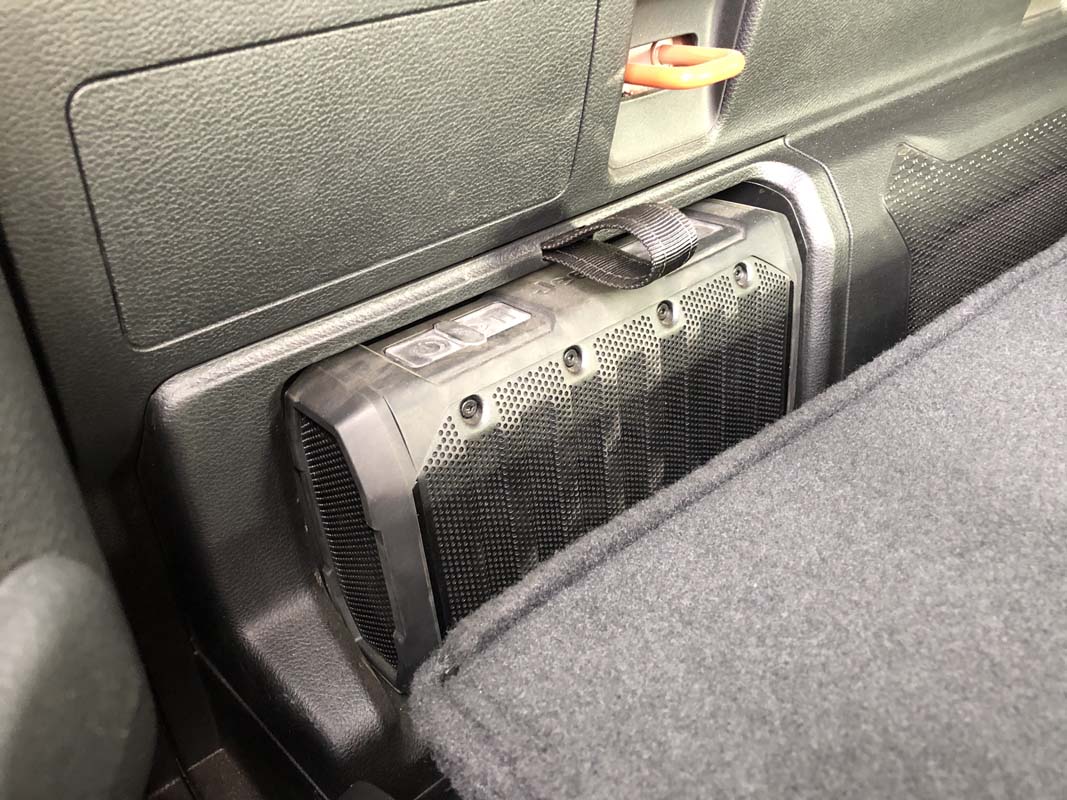 A stop off at a river lets us pop down the tailgate for a seat and have a bite to eat, enjoying the irony of the US’ Rubicon sitting alongside Australia’s river by the same name.

The tray itself measures 1531mm long with a 1270mm width and 885mm depth. The tray is actually a touch shorter than most dual-cabs but it’s deep and the clip-and-roll canvas cover works really well, plus the depth and width is sufficient for stacking in camping gear, firewood, a kid’s bike, camping stove and an esky/fridge. 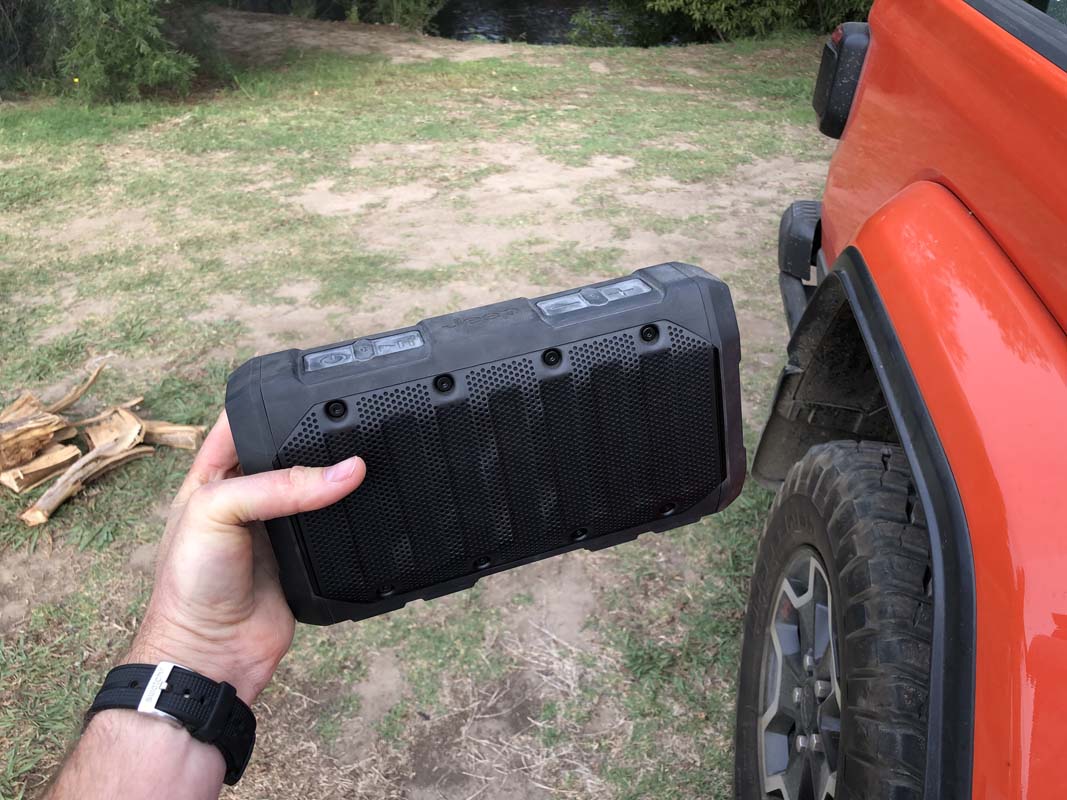 For the kid’s seat, the rear pews fold forward to expose proper body-mounted anchor points and there are isofix anchors too. It works well and the foot space for kids and adults alike is quite capacious. On the safety front, the Jeep Gladiator carries a mediocre three-star safety rating, tested by ANCAP under 2019 guidelines. However, the car itself wasn’t actually crash tested and ANCAP only extrapolated the results from the Wrangler. Now, there’s a potential point of controversy in that the USA’s NHTSA actually crash-tested a Gladiator because its chassis does differ in areas to the Wrangler, and it found it to perform better. ANCAP only tell us that they are confident in how they went about marking the Gladiator, but we think the obvious difference in size and changes under the metal means it might perform differently, if perhaps only slightly. 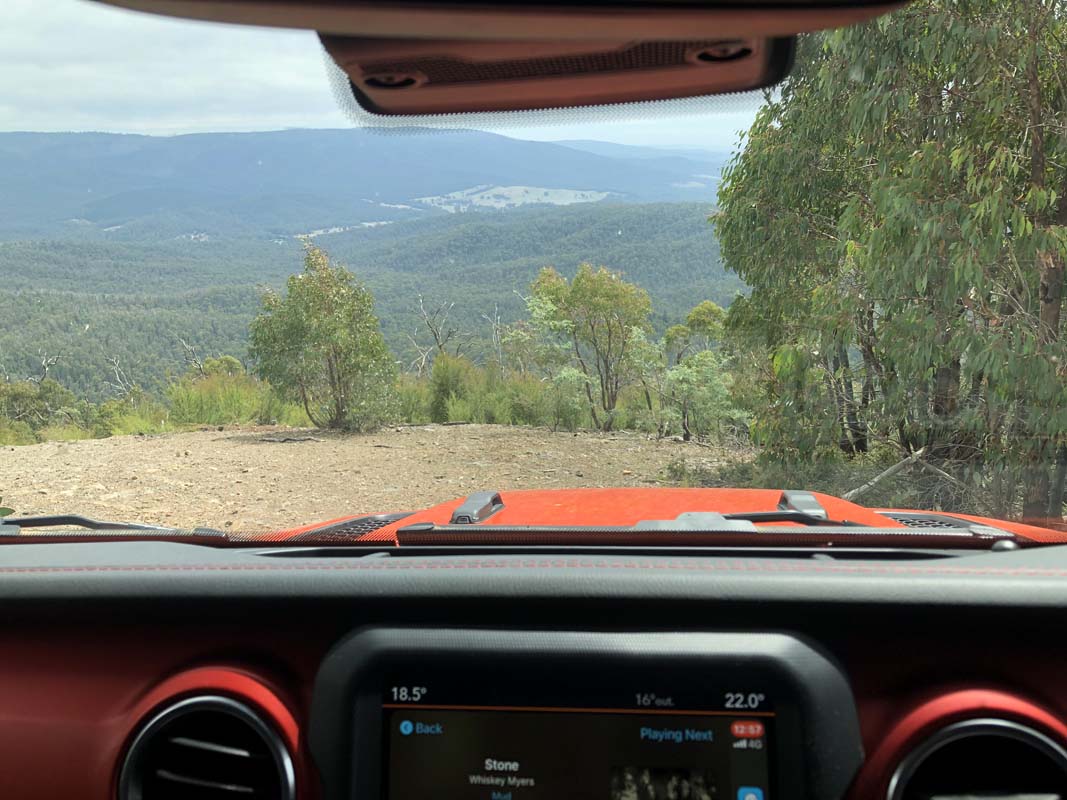 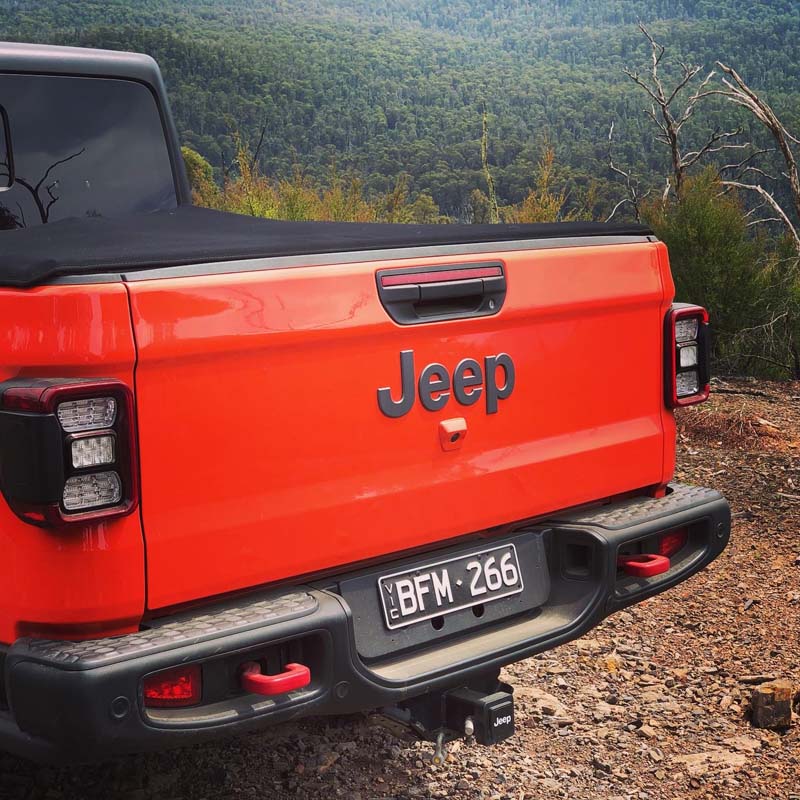 Other features not visible are a five-year/100,000km warranty and lifetime roadside assist when serviced within the Jeep dealership group. Service intervals are 12 months/12,000km and services capped at $399 for the first five years. 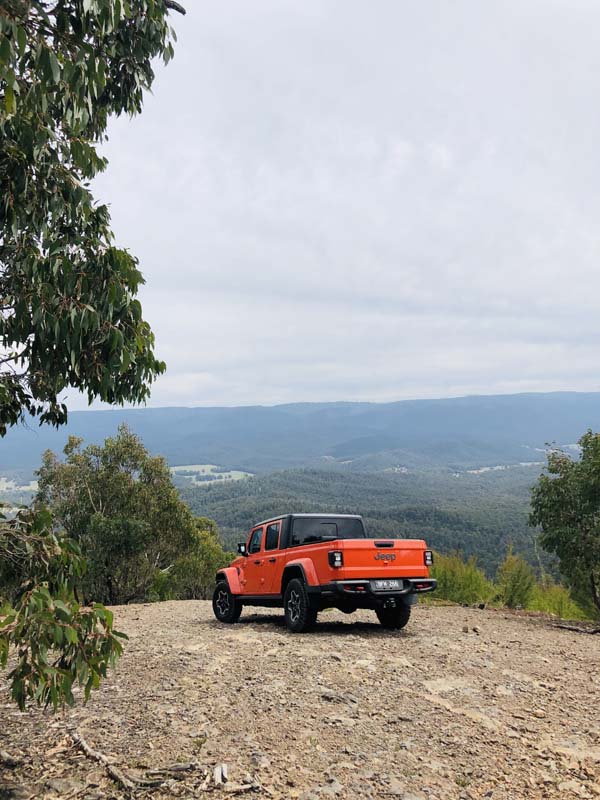 But one of the neatest features is a surprise when you find it. Behind the driver-side rear seat is a self-charging Bluetooth speaker and it came in very handy when we realised the speaker from home didn’t make it. It actually didn’t turn on at first but putting it back in with a click and turning the car on seemed to kick it back into life. Built by Alpine, it seems like a solid unit and the sound quality was good – loud and bassy but without sounding boomy. A good addition to a tailgate party.

It was a nice way to get familiar with our bright Pumpkin Orange Jeep Gladiator that gets a lot of looks and questions. Many are surprised to hear there’s no diesel option and fair enough, it would be the inclusion that would appeal to some. However, the petrol V6 is plenty powerful and gets along well, if a little thirsty at times, with an average of about 11L/100km not unreasonable for the type of driving we’re doing.

Next, we’ll need to give it a really good test on a proper 4x4 testing ground and see just how hardcore Jeep’s new ute is.