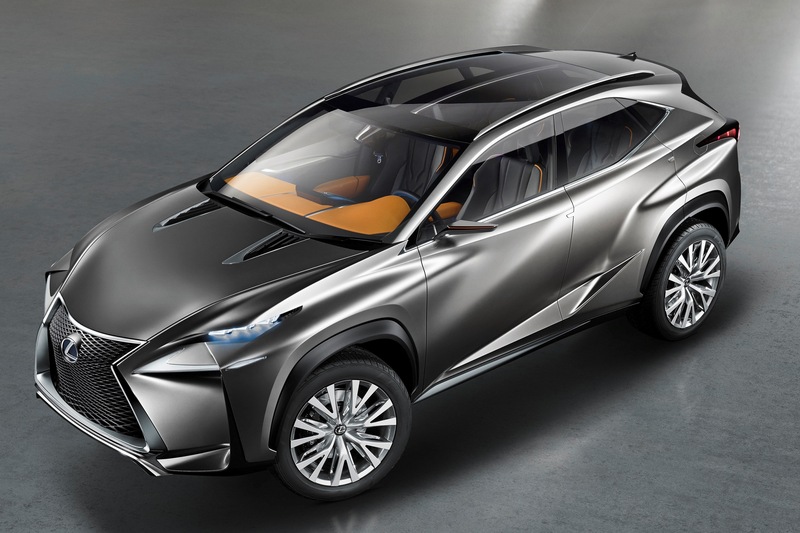 Lexus used this month's IAA show in Frankurt, Germany to launch a concept that could expand the luxury Japanese brands SUV offerings.

Dubbed the 'LF-NX' the SUV concept explores the possibility of a compact SUV - smaller than the existing RX - in the Lexus lineup.

Smaller than the current production RX - 4,640mm long, 2,700mm wheelbase - the LF-NX is Lexus' response to the growing compact urban SUV market, as recently exemplified by Ford's Kuga and Holden's Adam, amongst others.

Styling, with the 'spindle' grill, diamond-shaped beltline mouldings and sharp lines throughout, is distinctly Lexus, presented by the company as a "human oriented" evolution of their 'L-finesse' design language that's already been applied to models in their passenger car lineup.

Lexus International Executive VP, Mark Templin, said the "youthful, confident and innovative" LF-NX was devised to explore the potential for a compact SUV from Lexus.

"The LF-NX is a further demonstration of Lexus' lead in the area of hybrid technology," Mr Hanley said.

"For almost 10 years now, Lexus has been committed to hybrid technology and the unveiling of the LF-NX concept is just another string in our hybrid bow.

"With its striking design, innovative on-board technology and hybrid power, the LF-NX is something we'd love to see here in Australia sometime in the future," he said.


Exterior design
On the LF-NX, both the chrome trim and grille mesh pattern increase in size as the signature Lexus spindle grille widens, accentuating the wide front track and powerful stance.

The upper edges of the grille define the bonnet edges, with the base underscored by a chrome-finished under-tray.

The lower bumper flows into vertical air intakes. Unique corner detailing separates the bumper from the front wing with an aggressive vertical cut that narrows to a point beneath the headlamp clusters.

Both front and rear wings are formed by a series of concave and convex curves, trimmed in black, to suggest larger, more purposeful running gear underneath.

The belt line forms a pronounced diamond shape that reaches its widest point adjacent to the B-pillar before narrowing as it flows astern.

Side glazing profile combines with a steeply raked tailgate and integral spoiler to create the sweeping silhouette of an athletic coupe.

The rear is dominated by articulated lamp clusters that extend the full depth of the bumper, with the classic Lexus 'L' shape of the lamp scored strongly into the rear bodywork, creating an echo of the front end styling.

A deliberate design detail at the rear is the lack of a noticeable exhaust exit, which Lexus says refers to the full hybrid powertrain's environmentally-friendly credentials.

External finish is a new 'Brushed Metal Silver' exterior colour which Lexus says gives the impression that the body has been carved from a billet of solid metal.


Interior design
Continuing themes explored by both the LFA and new IS, the LF-NX's interior mirrors the highly-sculpted exterior styling.

A full-length centre console is finished in bright, brushed metal, as is the instrument cluster, steering wheel, seat structure and overhead console.

Cabin is trimmed in black and Sunrise Yellow leather upholstery with contrast stitching, and blue lighting for the instruments and switchgear.

Lexus says intuitive interaction with the vehicle's switchgear, instrumentation and Human Machine Interface (HMI) technology is at the heart of the interior design.

The upper 'display' zone features an exclusive driver's instrument meter design, while the lower 'operation' zone allows access to a new generation of touch-sensitive electrostatic switches and the new Lexus Remote Touch Interface (RTI), which combines a touch tracer display with a new touch pad design for smooth and intuitive use. 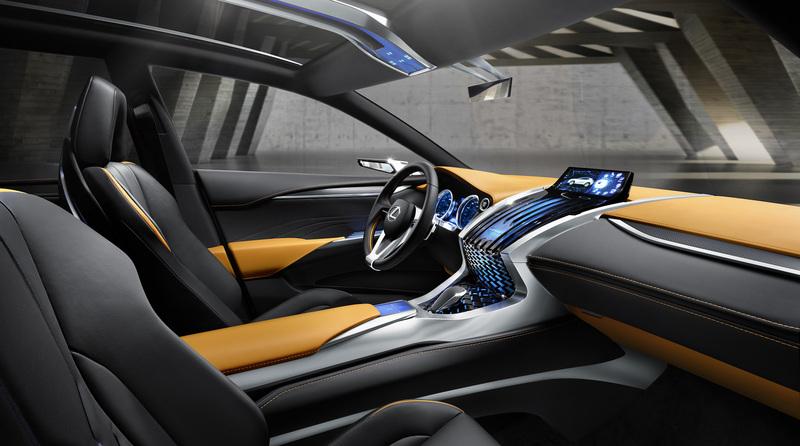 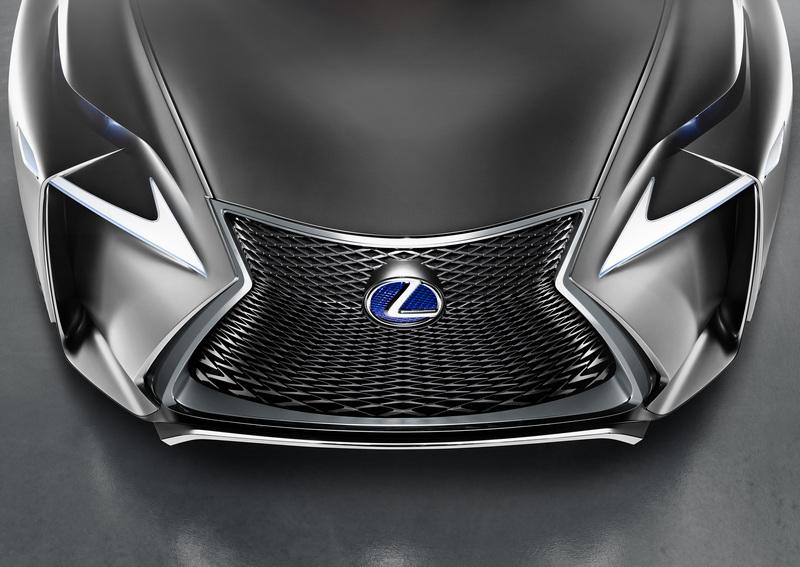 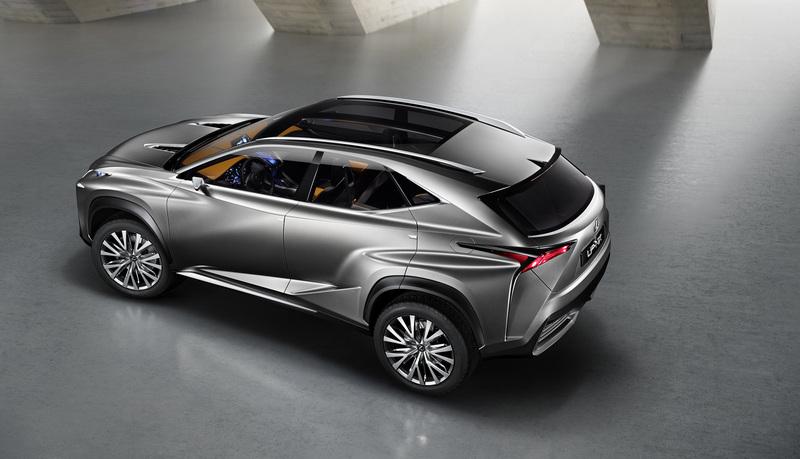 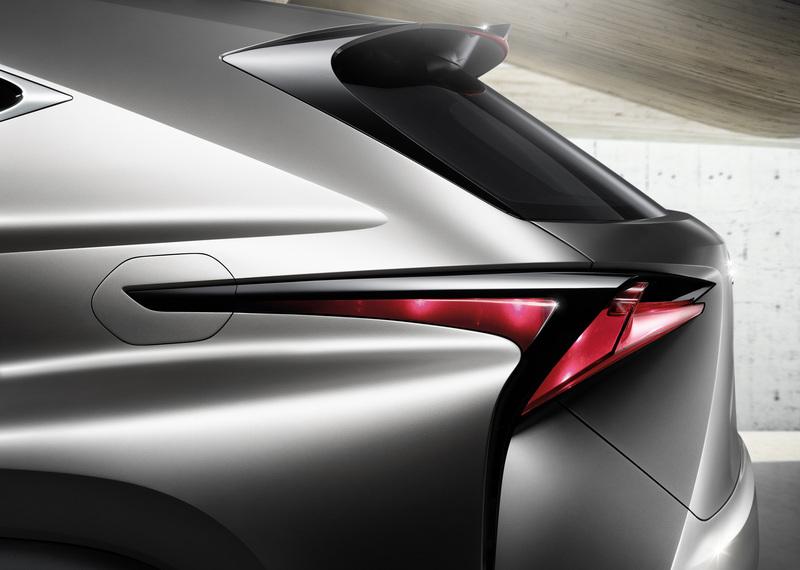 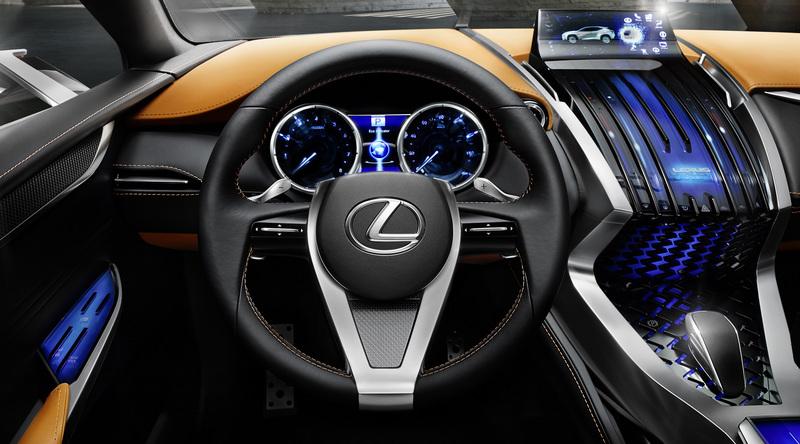 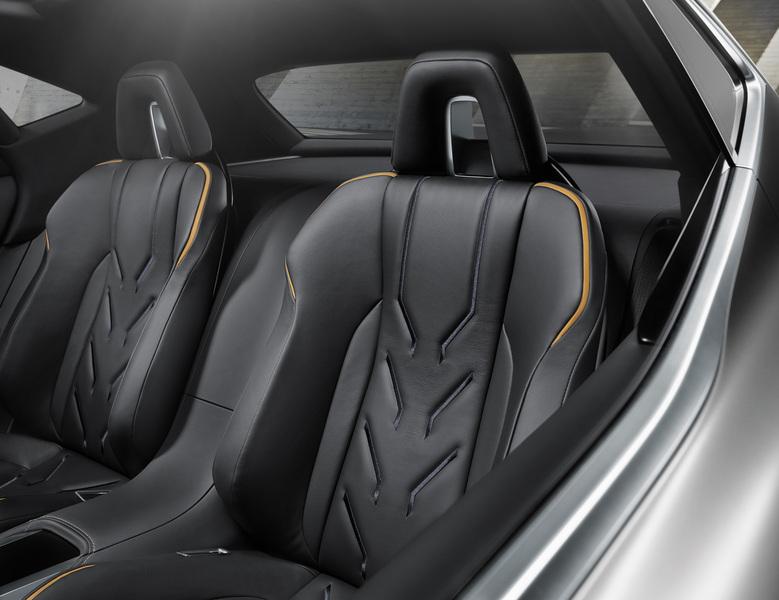 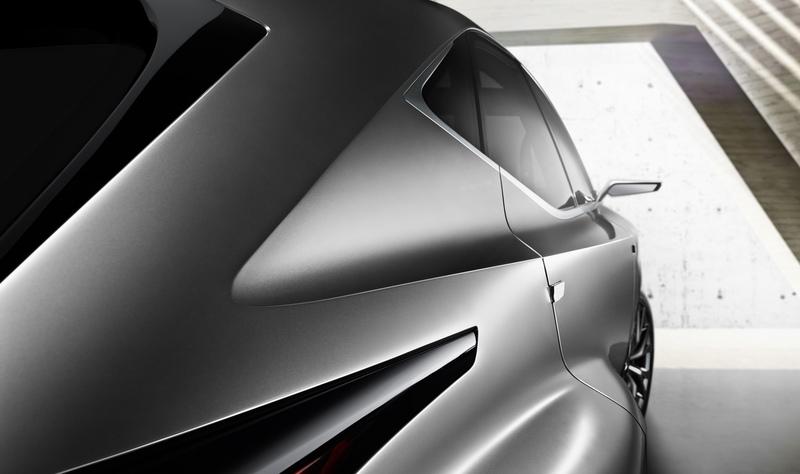